At the time of writing Borussia Dortmund sit at the top of the Bundesliga table enjoying a seven-point lead over second-place Borussia Monchengladbach. They would be forgiven then for not taking the DFB Pokal as seriously as the may have. With the opportunity to finally prise the league title out of the hands of their rivals Bayern Munich, we may have seen a weakened team in this fixture against Werder Bremen.

The squad depth enjoyed by Dortmund, however, is largely underrated. Although there was a degree of rotation we still saw a strong team selection from their Swiss coach Lucien Favre.

Werder Bremen have not enjoyed quite as impressive a season to date as their opponents in this match. The side from the north of Germany sit in 10th place in the Bundesliga. Bremen have impressed in patches under their first-year head coach Florian Kohfeldt and have shown an intriguing level of tactical variation. Kohfeldt was appointed by the Bremen board following an impressive spell within the club’s youth setup.

In the end, Bremen were able to progress following a win on penalties after a 3-3 draw over the course of 120 minutes. This tactical analysis will show how they won on the basis of a strong defensive performance that denied Dortmund the space in the final third they are used to. 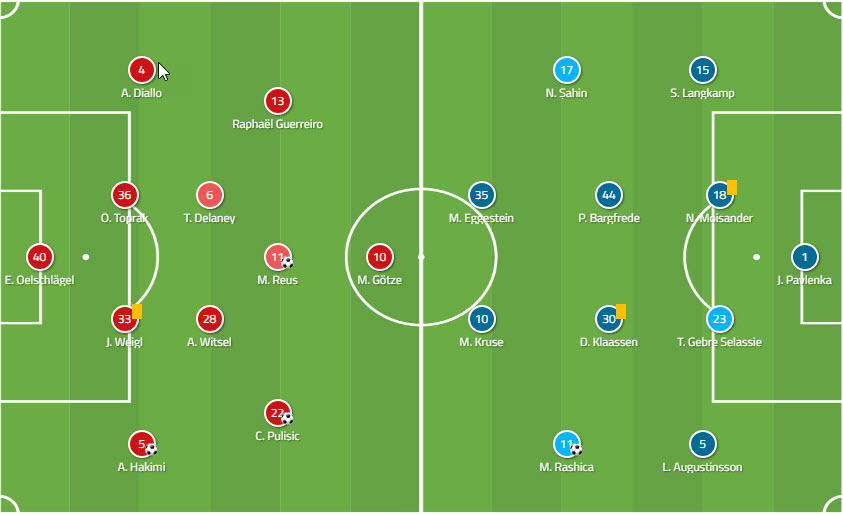 Wyscout has for once made an error on their official team sheets for the match as they have Bremen lined up in a 4-4-2 structure whilst they actually played in a 5-3-2.

For Dortmund, the biggest surprise came with the inclusion of the former Bremen goalkeeper Eric Oelschlagel in the starting lineup. This was a result of Roman Burki and Marwin Hitz both falling ill in the days leading up to the match. The other piece of significant selection news saw French central defender Abdou Diallo selected as left-back with Julian Weigl continuing in the centre of the defence.

Dortmund in their build-up phase

There was a clear game plan in the early stages for Dortmund to hold full-backs Diallo and Achraf Hakimi to a relatively deep line when in possession of the ball. The preference was for the ball to be built up through Marco Reus combining with Chelsea new boy Christian Pulisic on the right of the attack and Raphael Guerreiro on the left.

In order to facilitate this, we saw Axel Witsel continually drop back into the defensive line in order to allow Dortmund to safely progress the ball into the areas that Reus could operate. With Bremen pressing with two central forwards, faced by Weigl and Omer Toprak in the centre of the defence as well as a dropping Witsel, they looked to create a 3v2 numerical advantage centrally. 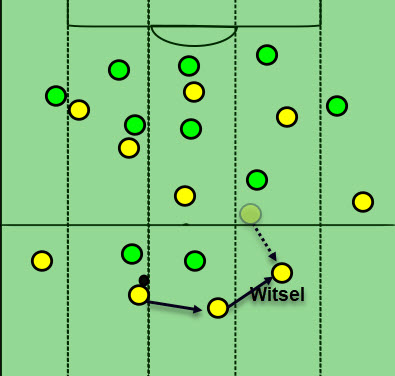 With Bremen defending in a deep block, we saw Witsel look to continually drop into the defensive line in the right half-space. This piece of movement allowed Dortmund to cycle the ball across the back line in order to find the free man in the line to progress the ball.

Despite Witsel dropping to create a three in the central areas, there was still little vertical movement from Diallo and Hakimi. This lack of movement further strengthens my view that this was a deliberate part of the game model from Favre.

We saw a similar form of movement on the next line from the excellent Marco Reus as he dropped in to support the central midfielder in progressing the ball. Reus scored a fantastic free-kick just before half time before being replaced by Spanish forward Paco Alcacer. 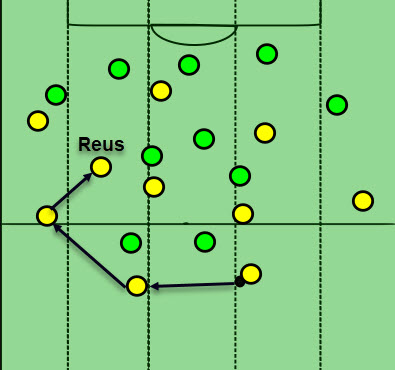 With the Bremen midfield sitting in a narrow shape we saw Reus drop into space either side of the midfield block in order to collect possession and drive play forward. This saw Dortmund able to safely progress the ball to the edges of the final third in their attacking phase.

As the match progressed into the second half we saw a slight change in the attacking phase from Dortmund as they began to release Achraf Hakimi to move into higher positions of the field. This was an obvious attempt to stretch the Bremen defensive structure to open spaces centrally that could be exploited. 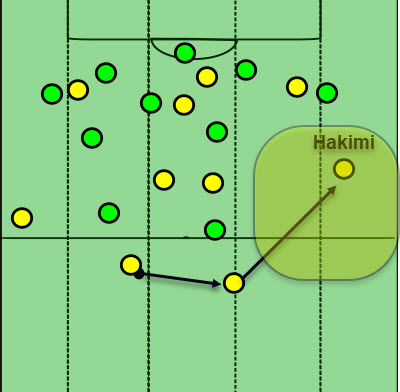 What was especially interesting about this change of structure was that Dortmund remained largely orientated in the central areas with their midfielders. Diallo still maintained a deep line just ahead of the two central defenders but Hakimi was released to move much higher when in possession. In this area, we saw Hakimi and Christian Pulisic combine to create overloads on the right of the attack. 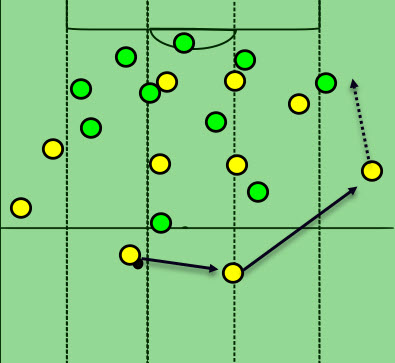 As Hakimi takes possession on the right side he is able to drive at the outside of the Bremen left back. With Pulisic positioned to the inside in the right half-space the Bremen left-back was constantly pressured into making difficult decisions. Does he move out to press the man in possession, or stay tight to Pulisic to deny the combination?

If the left-back was pulled into the wide area to engage the ball then the space was opened up for Dortmund to overload and attack the edge of the penalty area. What we saw, however, was that Bremen maintained their defensive shape and allowed Hakimi to push forward in possession. They were confident that their defensive structure could hold off the Dortmund attack.

As mentioned previously Bremen played in a 5-3-2 structure out of possession with the fullbacks pressing forward to form a 3-5-2 in possession. The majority of the match though was spent in the defensive phase with Dortmund enjoying the greater share of possession.

Despite conceding three times over the course of the 120 minutes, there was much to be admired in the defensive structure that Bremen utilised as they denied Dortmund space in the central areas. 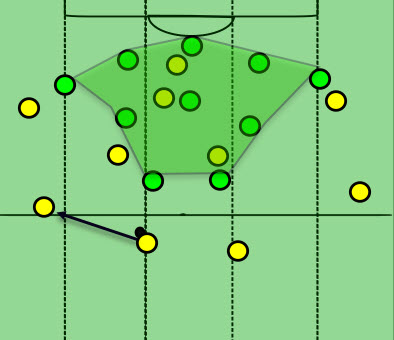 The three central midfielders for Bremen were positioned to close the passing lanes into central positions. The five players arrayed across the defensive line were narrow and compact in an effort to force Dortmund to attack in wide spaces. They were confident that they would be able to defend any crosses into the penalty area. 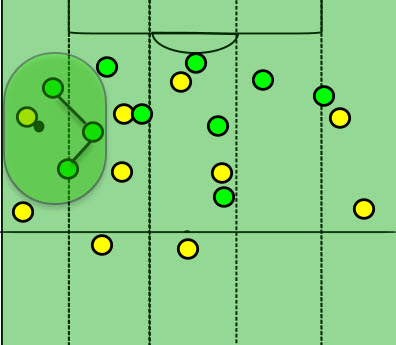 When Dortmund did look to access the wide areas though they were not simply allowed to advance forward completely unchecked. Instead, the near-side central midfielder and forward player would move to support the full-back in order to press the wide player in possession. The strong defensive structure inside of this press meant that there was no easy escape for the man being pressed.

In the end, there can be no doubt that Bremen deserved to get something from the match. They took the lead before coming back twice to equalise late in the tie. What impressed the most was the way that they were able to defend so effectively against a side that is normally strong in the attacking phase. Florian Kohfeldt deserves a great deal of credit for setting his side up in a manner to effectively negate the threat of Dortmund.

The home side are still challenging for the Bundesliga title and they are still in Champions League contention. Werder Bremen, on the other hand, will be content to continue trying to reach the final of the DFB Pokal.