The Champions League has finally returned and Borussia Dortmund welcomed Paris Saint-Germain at the Signal Iduna Park for the first leg in this extremely exciting tie. In the end, it was the Germans who triumphed 2-1 against the French giants with their young prodigy, Erling Braut Haaland, scoring a brace to give them the win.

This tactical analysis will dissect both teams’ tactics and see how exactly the hosts beat their guests on the night. We’ll also use analysis to determine some key elements of the clash.

Borussia Dortmund lined up in a 3-4-3 formation, a system fairly familiar to the Millionaires as they’ve used it in 19% of all their games in 2019/20. Of course, without the injured Marco Reus and Julian Brandt, Lucien Favre had to mix things up a little.

Roman Bürki was in-between the sticks while there was a three-man defensive line in front of him consisting of Mats Hummels, Dan-Axel Zagadou and Łukasz Piszczek. Raphaël Guerreiro and Achraf Hakimi were acting as wing-backs while Emre Can and Axel Witsel formed a double pivot in the middle of the pitch. Borussia Dortmund’s forward line consisted of Thorgan Hazard, Haaland, and Jadon Sancho. 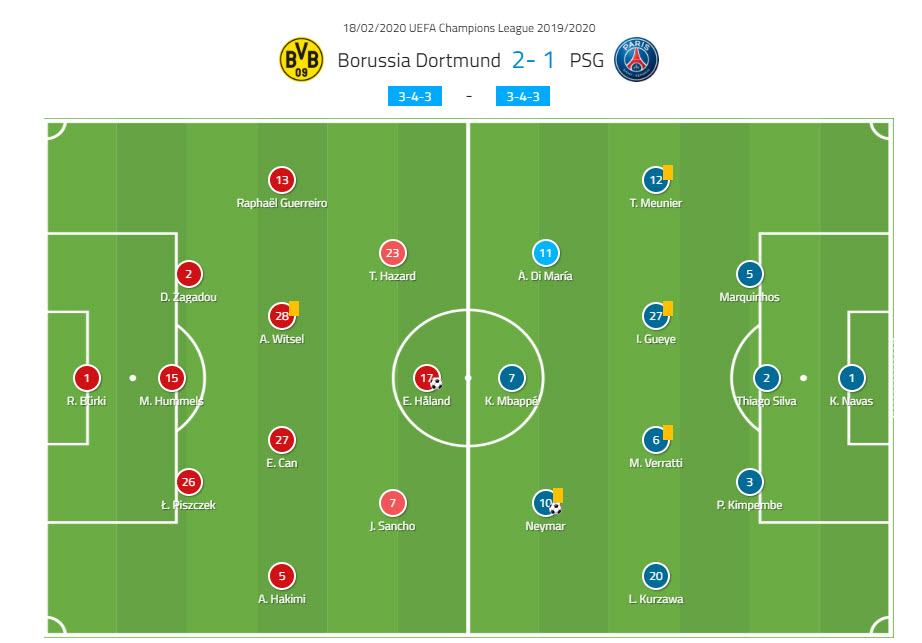 On the other side of the pitch, there were surprises when it came to the system selection of Thomas Tuchel. He opted to deploy his team in a 3-4-3 formation that would transform into 3-2-5 at times and ditched his trademark 4-2-2-2 he used throughout the Ligue 1 campaign.

There were no notable absences in their squad as far as injuries or suspensions were concerned. Keylor Navas was in goal and the trio of Marquinhos, Thiago Silva, and Presnel Kimpembe were his first line of defence. We saw Layvin Kurzawa and Thomas Meunier out wide and Marco Verratti with Idrissa Gueye as a double pivot.

Paris Saint-Germain’s forward line consisted of Neymar Jr., Kylian Mbappé, and Ángel Di María while Mauro Icardi was benched for the game and remained there for the full 90 minutes of the clash.

Tuchel opting for a switch in tactics and deploying his team in a new 3-4-3 system was quite surprising to see. After all, having found success with the 4-2-2-2, it was largely expected that the Parisians would retain it for the Champions League as well.

But with Borussia Dortmund defending in a really compact and narrow 5-4-1 formation, the French giants played right into their hands. The Germans wouldn’t press high unless the ball was recycled all the way back to Navas or if the back three pushed further up the pitch.

This meant that the middle of the park was highly congested and even though Verratti and Gueye would easily bypass Haaland who was the first line of defence, getting the ball into dangerous positions was almost impossible for PSG. 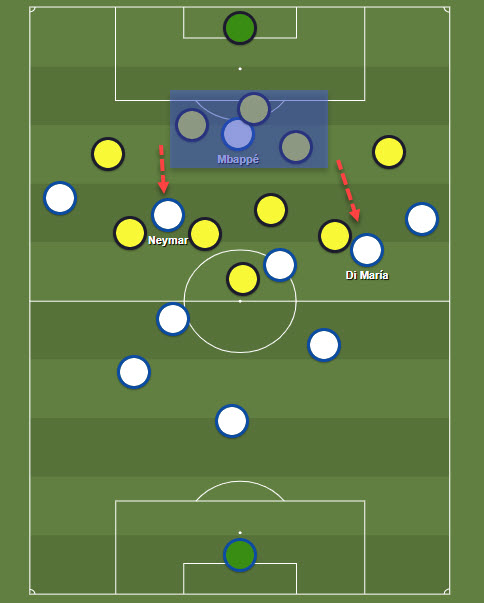 Notice in the graphic above how both Neymar and Di María would regularly drop from their respective half-spaces and into the middle of the park to receive the ball and fight the numerical inferiority. That also meant that two things would happen as a result. Firstly, they would receive the ball too far away from goal; and secondly, it would leave Mbappé completely isolated against Dortmund’s back three.

Of course, Paris Saint-Germain’s forward three were really flexible, often interchanging positions, dropping wide or deep when necessary but most of their penetration was done through the middle or at least, that’s where their focus was for some parts of the game. 13 out of their 23 positional attacks went through the middle but with only 0.17 xG.

But Dortmund had an answer for those attacking tactics as well, and if Neymar or Di María tried collecting the ball in their half-spaces around the danger zone, they would quickly get collapsed upon and boxed in by Dortmund, as we can see in the following two examples, one with each winger of Paris Saint-Germain. 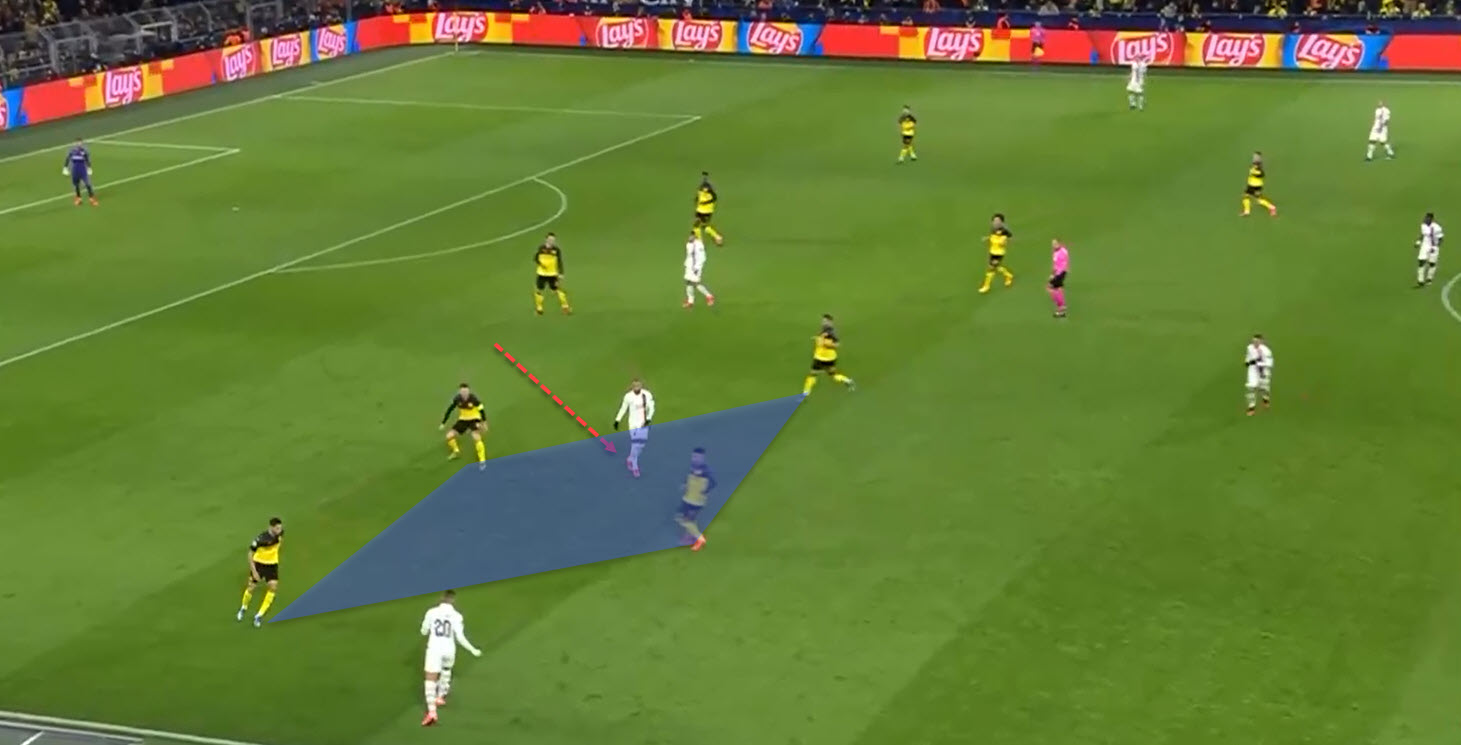 This meant that the visitors would merely recycle possession and bounce off of Dortmund’s defensive shape. The Germans didn’t really press high into the opposition’s half but did have certain pressing triggers once the Parisiens entered their territory.

If the ball was sent to their wing-backs, it would activate the press from the opposition wing-backs, and then when they forced them all the way back to the central defender or wide defenders, the front three would also step up and pressurise the ball-carrier.

The main idea was to tightly man-mark their attackers with both Neymar and Di María constantly having a marker on their back who would follow them as they dropped deeper and then when they were forced all the way back, the defender would promptly disengage and return back to his position.

As for Mbappé – as we’ve already mentioned earlier in this tactical analysis, he was mostly isolated up front and with three markers and no space to run into, he was mostly kept quiet for large portions of the game.

Paris Saint-Germain enjoyed more of the possession for large spells of the game and even though Borussia Dortmund were happy defending and soaking up the pressure without too much trouble, as we’ve seen in the previous part of this tactical analysis, they were posing more threat to the opposition despite arguably being the more defensive team at times.

Paris Saint-Germain had two different defensive tactics in tow when they were off the ball. Firstly, they would deploy a default 5-3-2 defensive shape in an attempt to minimise the potential damage that Borussia could cause against the run of play. This would sometimes transform into a 5-2-3 when pressure had to be applied to the backline, effectively creating a 3 v 3 situation with the defenders. 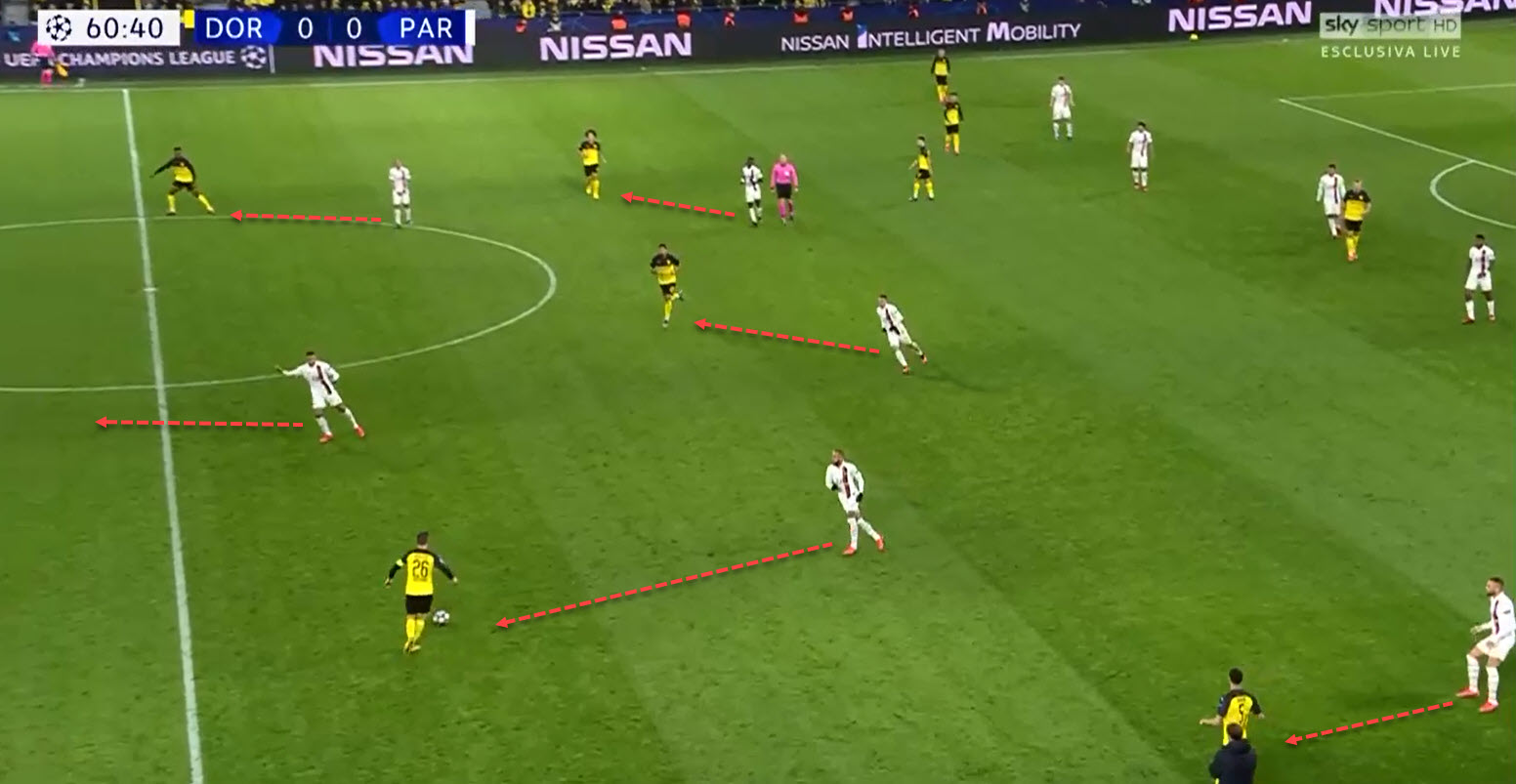 Notice above how that looked like on the pitch. Initially, Paris Saint-Germain are retaining their 5-3-2 formation but as the ball is moved backwards and Dortmund aim to stretch the defensive block, Neymar joins in from a deeper position and transforms their formation into 5-2-3.

Interestingly enough, the Germans would rarely try and build all the way from the back. Whenever the ball was with Bürki, he would usually go long and try to find Haaland to quickly start the attack. In that regard, Dortmund were relying on the fact that they could win both the first and the second ball and then rush into space afterwards.

A similar thing occurred when they were defending set-pieces and crosses into the box. The process was fairly similar – win the aerial duel, control the second ball and set it up for a quick transition, as we can see in the image below.

After clearing the ball from the box, they play a quick one-two to get past their markers and then in seconds, they reach the opposition’s final third with one crucial notion – numerical superiority.

Notice in the following example how Borussia Dortmund now have five players rushing Navas’ goal while Paris Saint-Germain only defend with their back three as the midfielders are late to provide additional cover.

The problem that PSG encountered was the lack of backtracking by their forwards. After bypassing the relatively low-pressure forward line, Dortmund had no trouble running over the double-pivot with pace and break through to the back-three.

The key, however, in their effective counter-attacking was in the coordinated and strategic press that pushed Paris Saint-Germain right where Dortmund wanted them to be. We’ve already mentioned in this tactical analysis that the Germans were defending in a compact 5-4-1 system that overcrowded the midfield and retained the numerical superiority in that area.

Notice below how they crowd the PSG midfielders and force a mistake that results in a quick transition. By cutting off their channels towards wide players, they forced them to go through the middle where they were outnumbered and easily collapsed upon.

It has to be said that Verratti was immense on the night, stopping the opposition from advancing and putting a great offensive shift as well. But there was still no way to successfully plug all the holes when they consistently got outnumbered in the middle of the park and especially in transitional play.

If we take a look at Dortmund’s recovery map and PSG’s losses on the night, we can see that the vast majority happened through that middle channel and rarely out wide. This is no coincidence as the Germans were forcing the Frech team into those areas where they would easily snatch the ball away.

In the end, two out of their three pure counters ended up with a shot on goal.

The final part of this tactical analysis will just briefly dissect how both teams relied on runners in behind the defence. With both managers opting for a similar approach and similar systems, the tactics would often mirror each other.

With Dortmund being so compact and defensively solid, it only took individual brilliance from Mbappé to break them down. But the forward was unusually quiet for most of the time as a direct consequence of being completely isolated and with no space to run into.

Yet on occasion when Dortmund’s centre-backs were pulled out of their position, Paris Saint-Germain would look to deploy passes behind the backline and into space for Mbappé. Notice below how they try to take advantage of Dortmund’s defence not being turtled up and completely set by sending a through ball in behind them.

But unfortunately, this did not yield them much and as we’ve said, their only goal was a result of individual brilliance. Borussia Dortmund, on the other hand, used Haaland perfectly and he was at the very centre of their success.

Instead of being bullied by the defensive line of PSG, he was the one pinning them down and moving them around when needed. Let’s take a look at the first goal he scored on the night. Not only does the youngster drop deep to assist the build-up and lay off the ball for his teammate but he also does something even more important.

His run takes away both centre-backs and pushes them back, creating space for his teammate who’s rushing forward behind him. Of course, the shot is parried away and Haaland is the first to jump on it but his job was done even before he rattled the inside of the net.

It was this kind of presence that enabled Borussia Dortmund to manipulate the shape of their opposition and take full advantage of it. Paris Saint-Germain never had such a focal point up front who could pin the defenders and create space and they suffered heavily because of it.

Interestingly enough, Dortmund also took a page out of Paris Saint-Germain’s book and employed similar tactics when attacking the space. The wingers would often drop deeper, just like the ones of PSG, and would pull the centre-backs al the way with them deep into their own territory.

This, if executed properly, would leave acres of space for Haaland and the other wide players to rush into. A precise long ball from the back made that much more sense for the Germans in that case, as we’ve already mentioned in this tactical analysis that they would often hoof it long instead of patiently build from the back.

Even though Paris Saint-Germain dominated the ball throughout the game, Tuchel’s tactics were not really on par with Favre’s. Borussia Dortmund were in a firm position and could’ve easily capitalised on more of their chances that were mainly created through fast transitions and counter-attacks.

But despite a 2-1 victory being a valuable one for the hosts, it still feels like PSG have the edge with the return leg back in France. The clash at Signal Iduna Park had a slow start but did not disappoint in the end.

Let’s see if Tuchel can turn this around come the reverse fixture.