VFL Wolfsburg made a positive start to life under Oliver Glasner as they dispatched Köln 2-1. Goals from Maximilian Arnold and Wout Weghorst put Wolfsburg in a comfortable position as the home side picked up all three points despite a late goal from Simon Terodde. Glasner is one of the coaches to look out for this Bundesliga season and Wolfsburg will have ambitions of challenging for a European spot. This tactical analysis aims to look at how Wolfsburg played under their new coach and where Köln struggled. 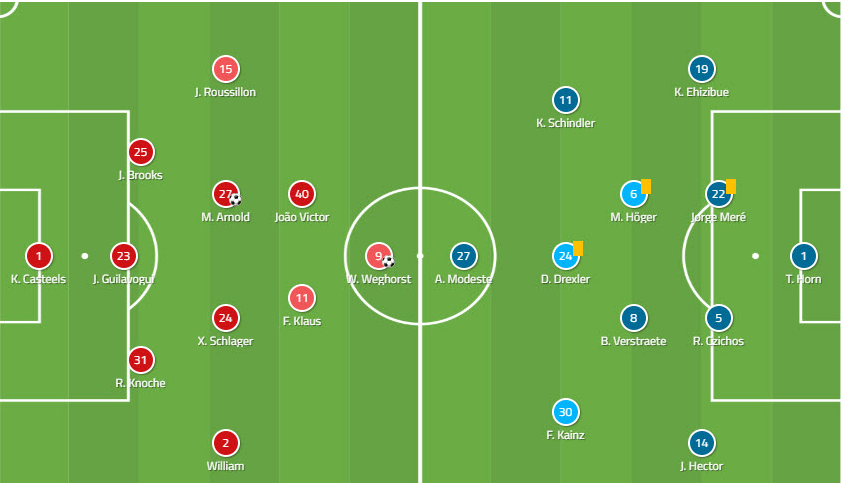 Wolfsburg lined up in a 3-4-2-1 formation. The ever-reliable Joshua Guilavogui was played in defence as a centre-back as opposed to his usual role as a defensive midfielder. The Frenchman played alongside Robin Knoche and John Anthony Brooks in what was an imposing backline. In midfield, club stalwart Max Arnold was paired with new signing Xaver Schlager. Jerome Roussillon and William played as the wing-backs. Joao Victor, who followed Glasner from Linz, played in the attack along with Felix Klaus. Wout Weghorst led the attack.

Köln opted for a 4-2-3-1 with Anthony Modeste leading the line. The experienced Timo Horn was in goal as Jonas Hector played as left-back. Dominick Drexler was the attacking midfielder with Florian Kainz and Kingsley Schindler on the wings. The highly-rated Jorge Meré played in defence.

One of the most interesting aspects of this game was how Wolfsburg’s formation worked. It was far from a standard three-man defence. Guilavogui playing as the middle centre-back meant that Wolfsburg were able to transition from the defence to midfield very quickly. Guilavogui’s experience in midfield enabled him to venture further up the pitch as well as win duels while playing a high line. He was ably covered by Knoche and Brooks. This facilitated Wolfsburg’s high-press from defence to attack.

Similarly, on the right side, William was allowed to make the most of his attacking capabilities with the mobile Knoche covering him in defence. Knoche’s positioning kept changing throughout the game. The German played as the right-sided centre-back for the majority but at times as a right-back when Wolfsburg switched to a four-man defence in order to facilitate overloads in the wide areas. When Köln tried to build from defence, he moved into midfield and helped to match the numbers the opposition had in the middle of the pitch. This constant movement of players was very interesting to see but more encouragingly, the way the Wolfsburg players were able to seamlessly rotate with fluidity shows that Glasner’s tactics are already being bedded in. This backline looks to be Wolfsburg’s best choice as it is physically imposing, decently quick and has the ability to play out from the back.

Mobility and intensity in midfield

Wolfsburg got their combinations right all over the pitch. Another case of this was in midfield with Schlager and Arnold playing together. The all-action Schlager had a brilliant debut game for Wolfsburg as he covered every blade of grass. The Austrian made 39 passes recording an assist, made two dribbles, attempted three tackles and made two clearances. His teammate in Arnold scored a wonderful opening goal and made 52 passes. The duo were excellent together with Arnold’s calm passing and intelligent positioning perfectly complementing Schlager’s intense pressing. Arnold, especially, was important in winning the ball back if Köln managed to beat Wolfsburg’s press. His ball circulation to the wider areas was reliable as well.

Weghorst as a focal point

Wout Weghorst was the focal point of Wolfsburg’s attack and understandably so. The Dutchman enjoyed a prolific debut campaign in the Bundesliga and looks primed to improve on his 17 goals and seven assists from last season. Wolfsburg use Weghorst’s physicality very effectively. He is very good at playing with his back to goal and brings his teammates into play. At the same time, his aerial prowess makes him a menace for the opposition defence.

These trends were seen in this game as Wolfsburg would press intensely in the central areas and then play the ball wide looking for a cross. Weghort did not lead the press as such but instead held his position to ensure that when his teammates won the ball, they would be able to play it into his feet. His goal came from Schlager winning the ball in the final third before threading a pass for him to finish.

The tenacity of the wing-backs and speed of the attackers like Victor, Klaus and Schlager mean that there is always constant movement around the Wolfsburg attack. The same set-up could also work in games against better sides where Wolfsburg cannot expect much possession.

How did Köln fare?

Köln were very cautious in their approach to the game. Achim Beierlorzer’s side tried to stay compact and hit the home side on the counter-attack but struggled to deal with Wolfsburg’s directness and speed. Anthony Modeste was starved of service although he did well to hold up the ball whenever it was played to him. To their credit, Köln didn’t do too much wrong defensively apart from failing to defend the wide areas better. Whenever they did find space in the final third, the visitors were let down by some poor deliveries and a lack of composure in their passes. They were fortunate to score a consolation goal due to a defensive error but Köln need to take more risks if they are to trouble the opposition.

In conclusion, Wolfsburg eased to a win over Köln in Glasner’s debut game. The experimentation was there to be seen but the dynamism, speed and intensity Wolfsburg used to defeat Köln was positive and encouraging. For Köln, it was always going to prove to be a difficult away trip but they did themselves no favours by wasting the chances they got. However, with a long season to go, the visiting side will need to take more risks with their tactics if they are to stay in the Bundesliga. As this analysis has shown, the tactical flexibility during the game itself gave a glimpse of what we can expect from Glasner’s Wolfsburg side.