The UCLA Bruins are one of the strongest sides in NCAA women’s soccer. Until a recent wobble where they drew with USC and lost 2-1 to Oregon State in extra-time, they won their first 8 games in 2021. Since the draw and loss they have bounced back with wins over Washington State and Washington.

This tactical analysis looks to give some insight into the tactics used by UCLA Head Coach Amanda Cromwell, whilst giving a brief analysis of some key aspects of their game model and an overview of some key players worth keeping an eye on.

UCLA are tied to a 4-3-3 /4-5-1 system, which can be viewed as either depending on the width and height of their wide attackers, but regardless of how you view it, Cromwell likes a back four with three central-midfielders. Generally speaking she looks to utilise a single pivot, most often using the excellent Senior midfielder Marley Canales in this position.

Generally Cromwell opts for Olivia Athens and Danielle Sheehan in front of Canales when forming this midfield three.

Behind this midfield three, UCLA are blessed with defensive talent. Their most commonly used back four has involved Michaela Rosenbaum at right-back, England U21  and Arsenal academy product, Lucy Parker and Karina Rodriguez at centre-back with Jacey Pederson at left-back. Brianne Riley has also been a regular either starting at centre-back or right-back. Along with goalkeeper Lauren Brzykcy this defence has kept seven clean sheets in their first 12 games this season – an incredibly impressive feat.

Further ahead, on either wing, they predominantly use Reilyn Turner on the right and Kaila Novak, who are both in their freshman year, although another freshman Megan Edelman has also featured relatively regularly on both sides. Up front, Mia Fishel is most commonly used. 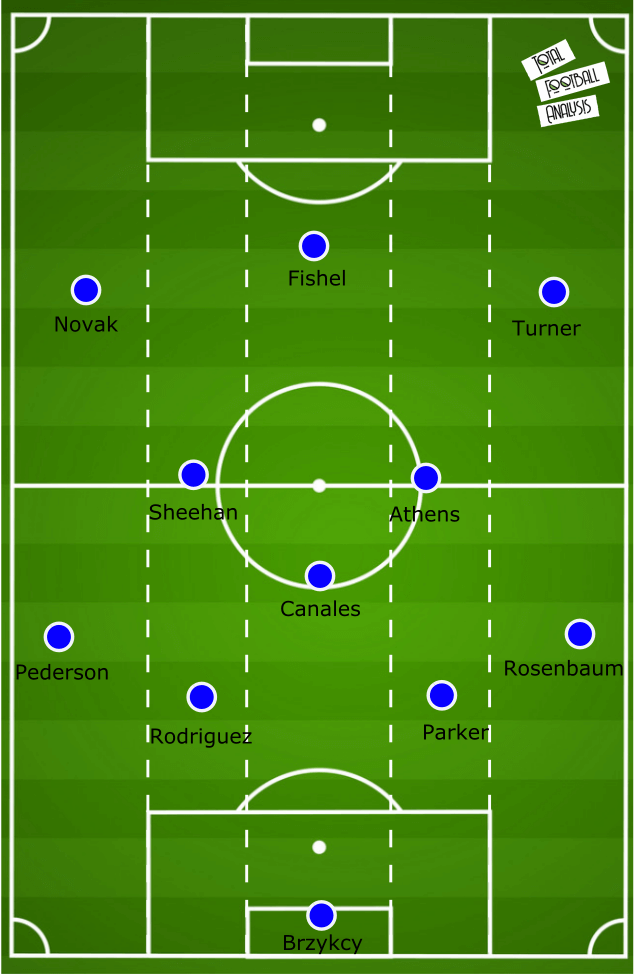 Out of possession, UCLA look to take up a 4-1-4-1 shape, with the single pivot bridging the gap between the defence and midfield. Depending on how aggressive they want to be with the press, they will at times push a midfielder up to join the forward to give a front two, and this move is reciprocated by the pivot who pushes forward themselves, to give UCLA a standard 4-4-2 shape. 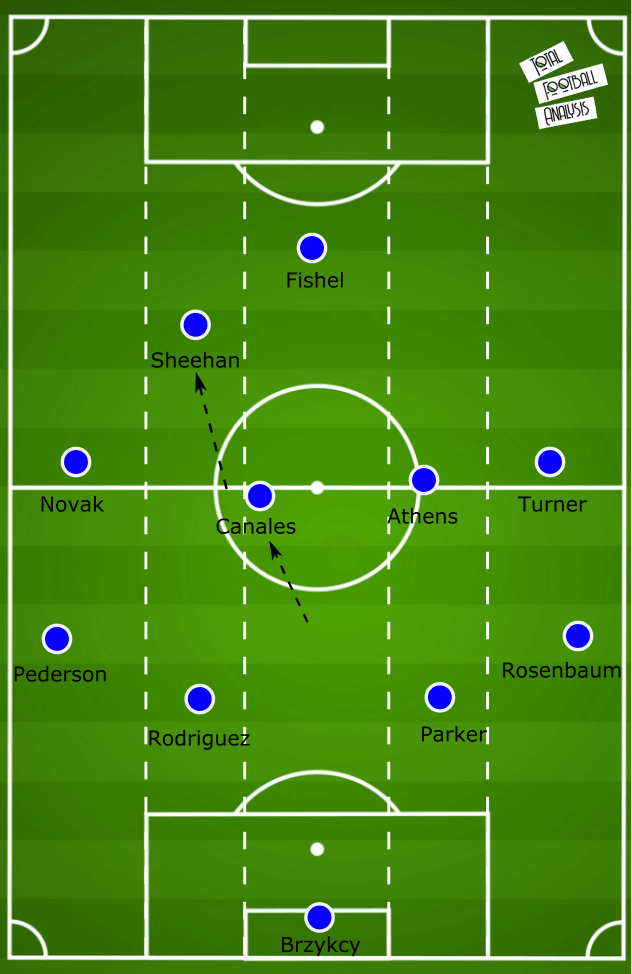 We can see this pattern in the image below, where UCLA press an Oklahoma State goal-kick. The central-midfielder pushes up to join the lone striker. 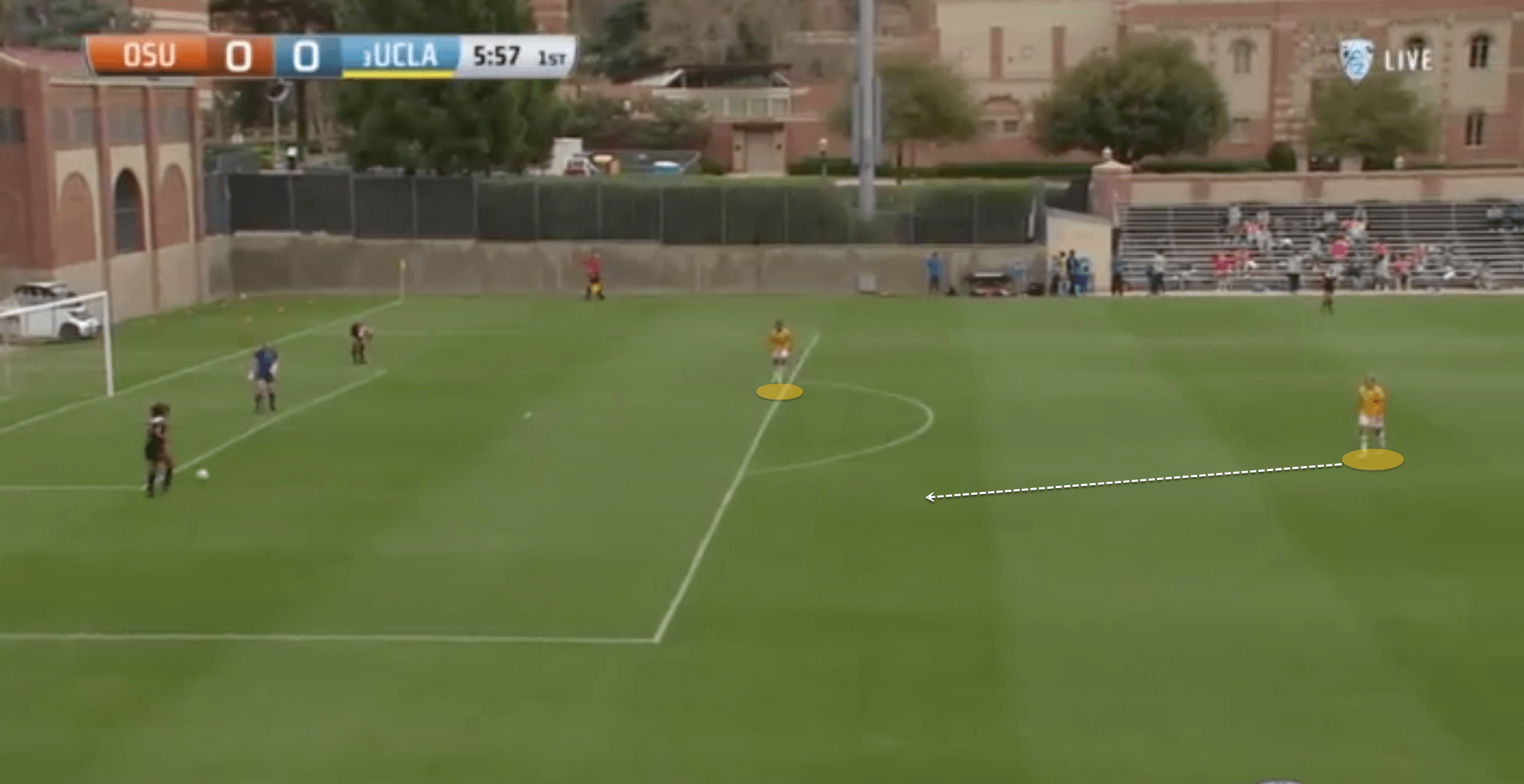 As they do this they are careful to ensure the opposition pivot, highlighted in red, is kept in their cover shadow, and they look to curve their run to force the ball-carrier to play away from the centre of the pitch. 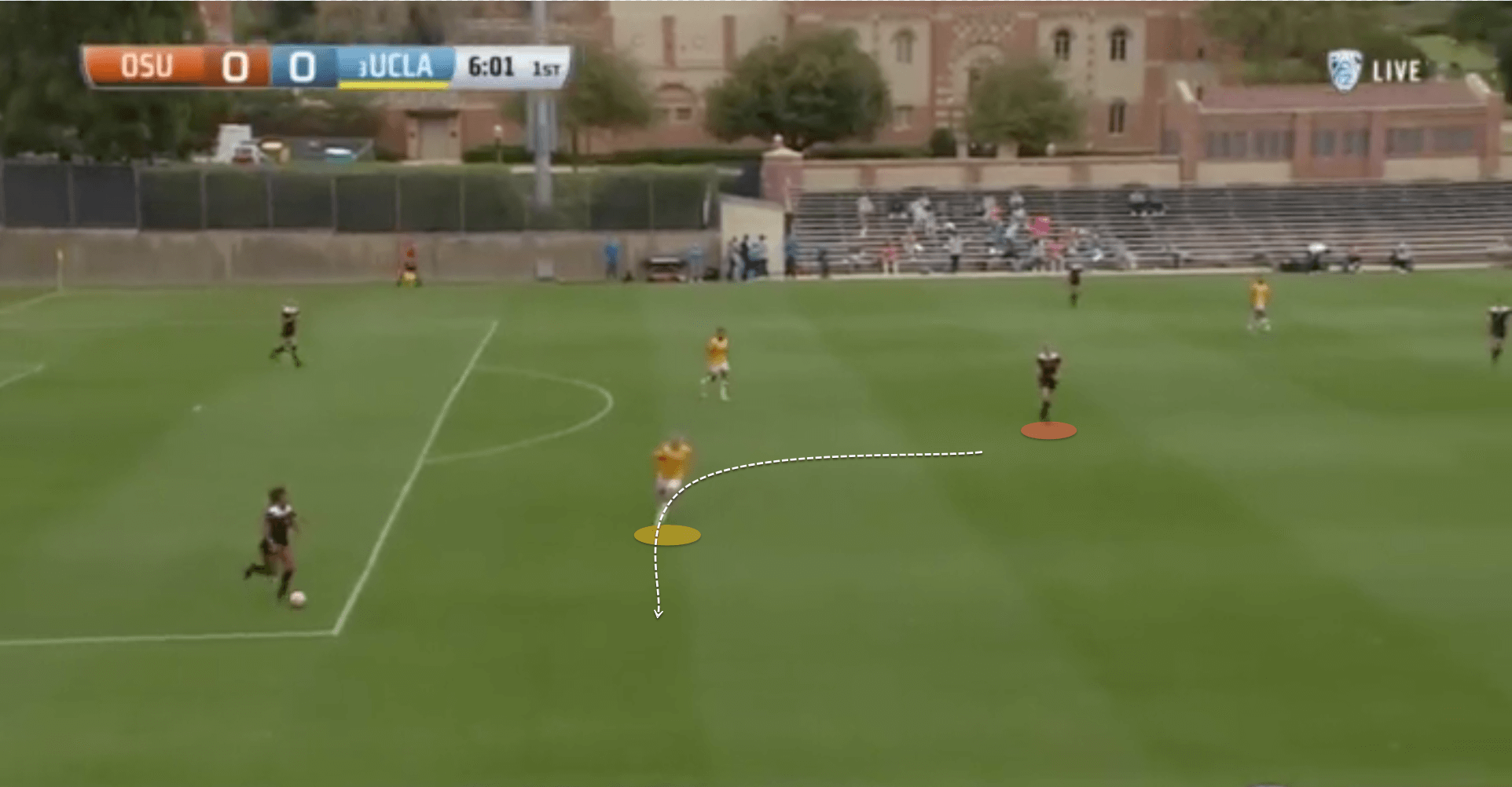 At this point, the centre-forward is now ready to press the pivot should they look to play inside, whilst UCLA’s left winger pushes up to press the ball-carrier. From this angle it’s incredibly difficult for the opponent to do anything with the ball that wouldn’t result in UCLA regaining possession. 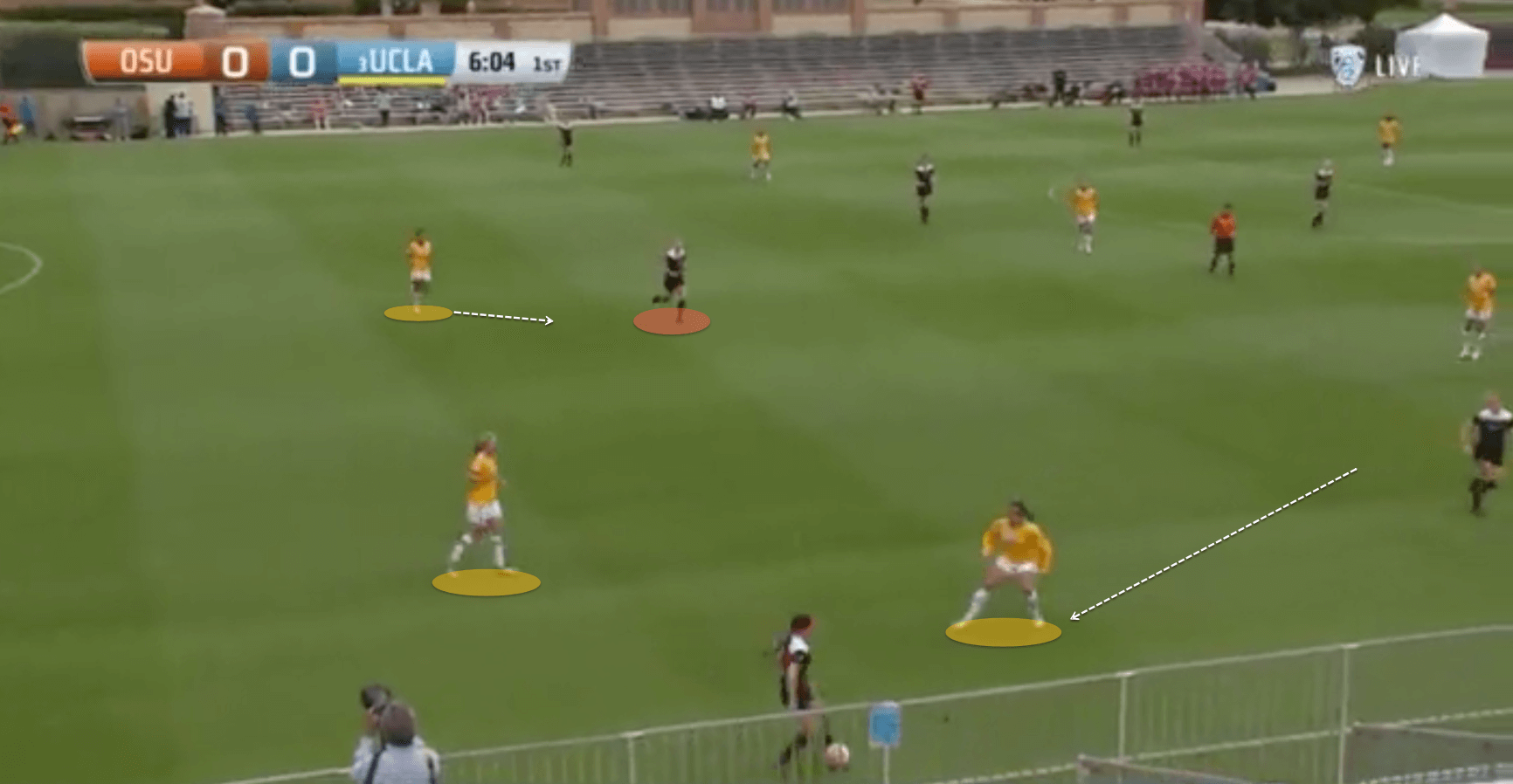 When the ball is worked wide and one of the midfielders pushes forward to join the forward, it will generally be a central midfielder. Because of this, the pressure comes from the centre of the pitch, and so, the central-midfielder aims to keep the centre of the pitch covered. However, this isn’t always possible, and if the opposition team is bold in the build-up, and their pivot is aware of what UCLA are looking to do, they can bypass this by having the pivot drop just a little deeper. 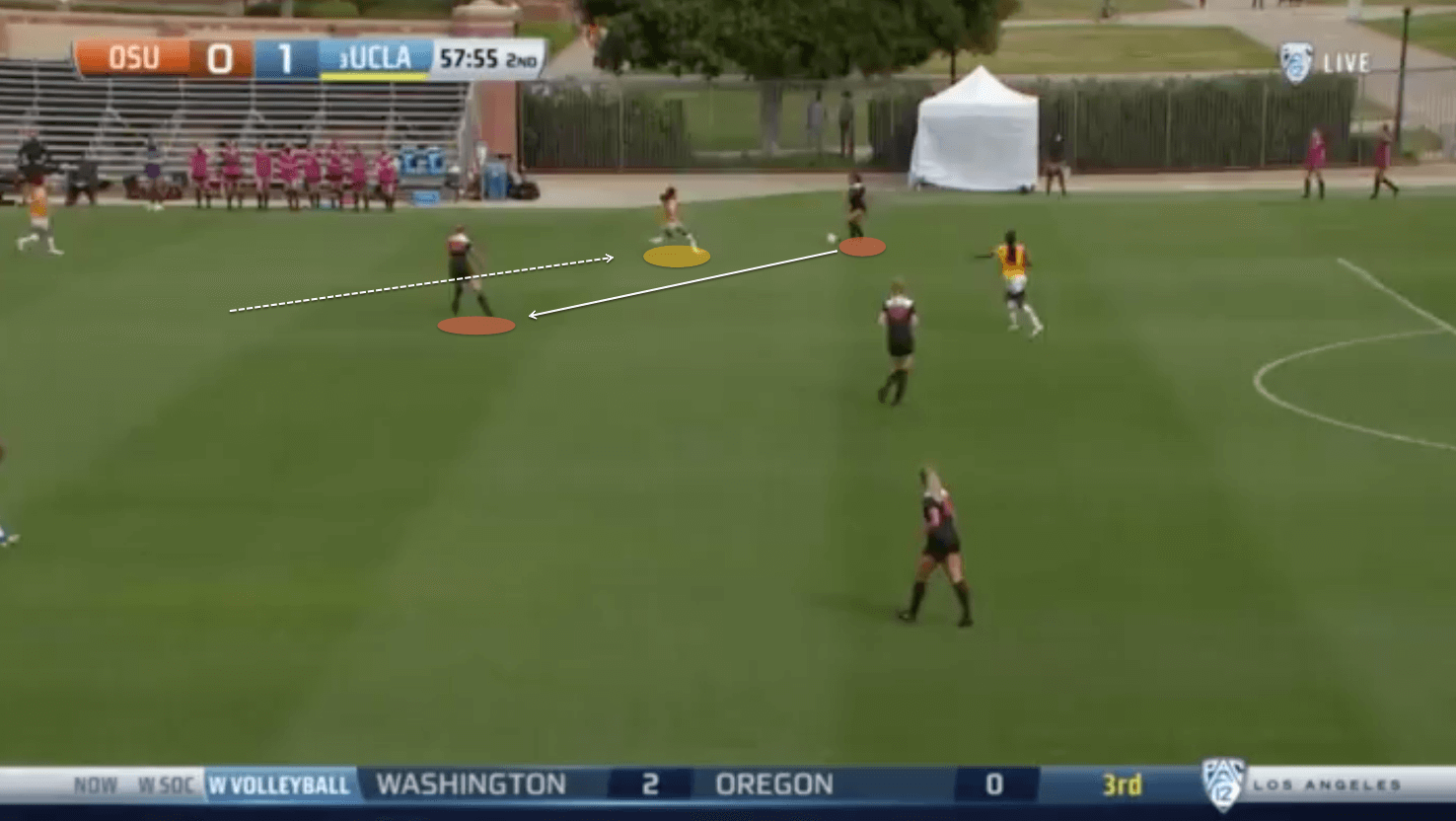 UCLA play a patient possession game, and are blessed with a group of players who are calm and composed in possession, as well as technically gifted on the ball. As such, they build from the back with Brzykcy playing a part in their build-up too. The centre-backs get short and wide early and get themselves on the ball, before circulating possession across the back four, waiting for an opening. They have three ways to go from this point. Firstly, both full-backs are excellent ball progressors on the dribble, and if given space will confidently drive forward to carry the ball in or towards the opposition half. If playing against a side who aren’t interested in pressing high, then this is an easy option. But regardless, against a high press UCLA are more than competent at circulating the ball before creating enough space for a full-back to drive forward.

In fact, width is ever-present in their build-up, particularly against a high press, as they look to stretch the opposition press. Whilst this gives the full-backs more space, it creates gaps in the press of their opponent, and allows the centre-backs to break the lines in seeking out Canales in the pivot – or potentially players even further forward. 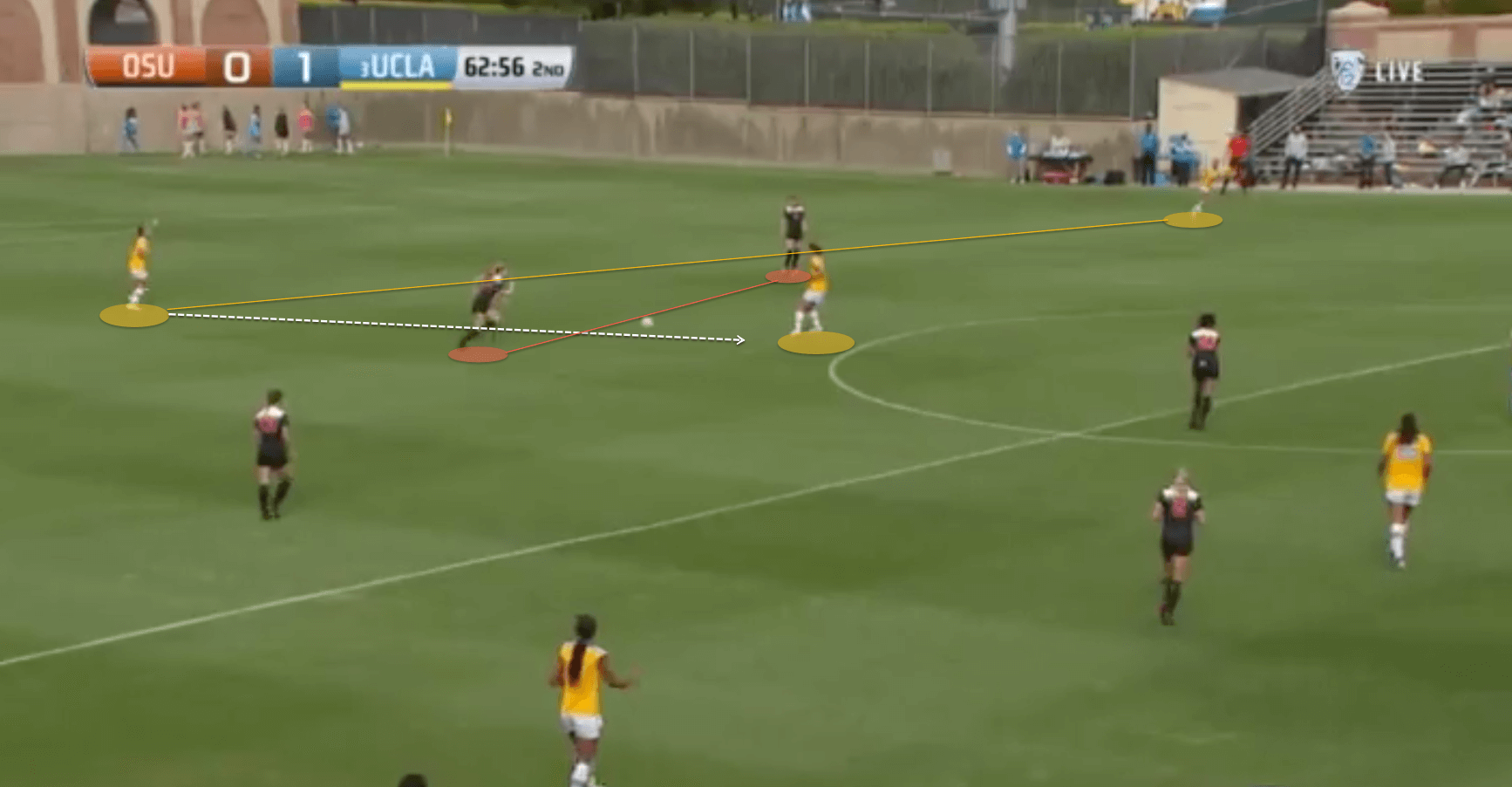 All of the midfield three are smooth operators in possession, and are comfortable playing when under pressure.

Canales will engage with Athens and Sheehan in tight triangles, drawing the opposition narrow. Again this creates even more space for the full-backs, and once again they can play out wide in these instances to continue progressing the ball.

Aside from using these combinations to simply bring the opponent towards the centre before playing a lateral pass out wide to the onrushing full-back, they can buy time to create space for the long diagonal ball. This is particularly effective when one of the wingers makes a run from out wide across the defence, creating even more space out wide for the full-back to push forward. We can see this in the image below as right winger Turner makes a diagonal run across the back line whilst the right-back pushes forward to receive the diagonal pass. 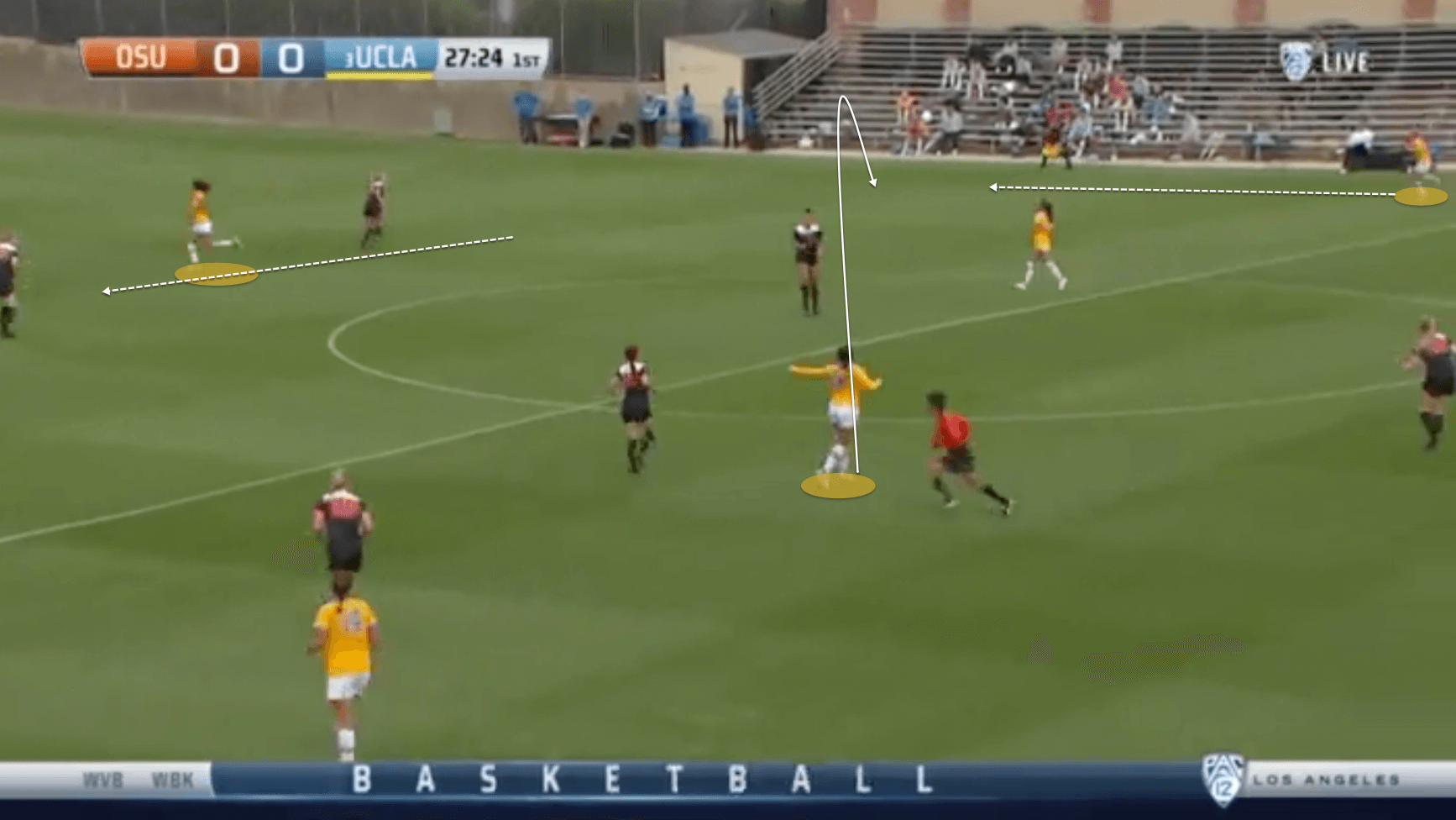 Finally, teams have to be aware of the on-ball ability of UCLA’s centre-backs. On top of being accomplished ball-players, the centre-backs will engage their opponent in 1v1’s when they’re building up. Whilst this can be considered risky, they will use this as a get out of jail card when being pressed with no obvious passing options available. They can use the dribble to beat the press, like in the image below, but if given space, they are just as confident driving forward even further themselves, progressing the ball to the halfway line. 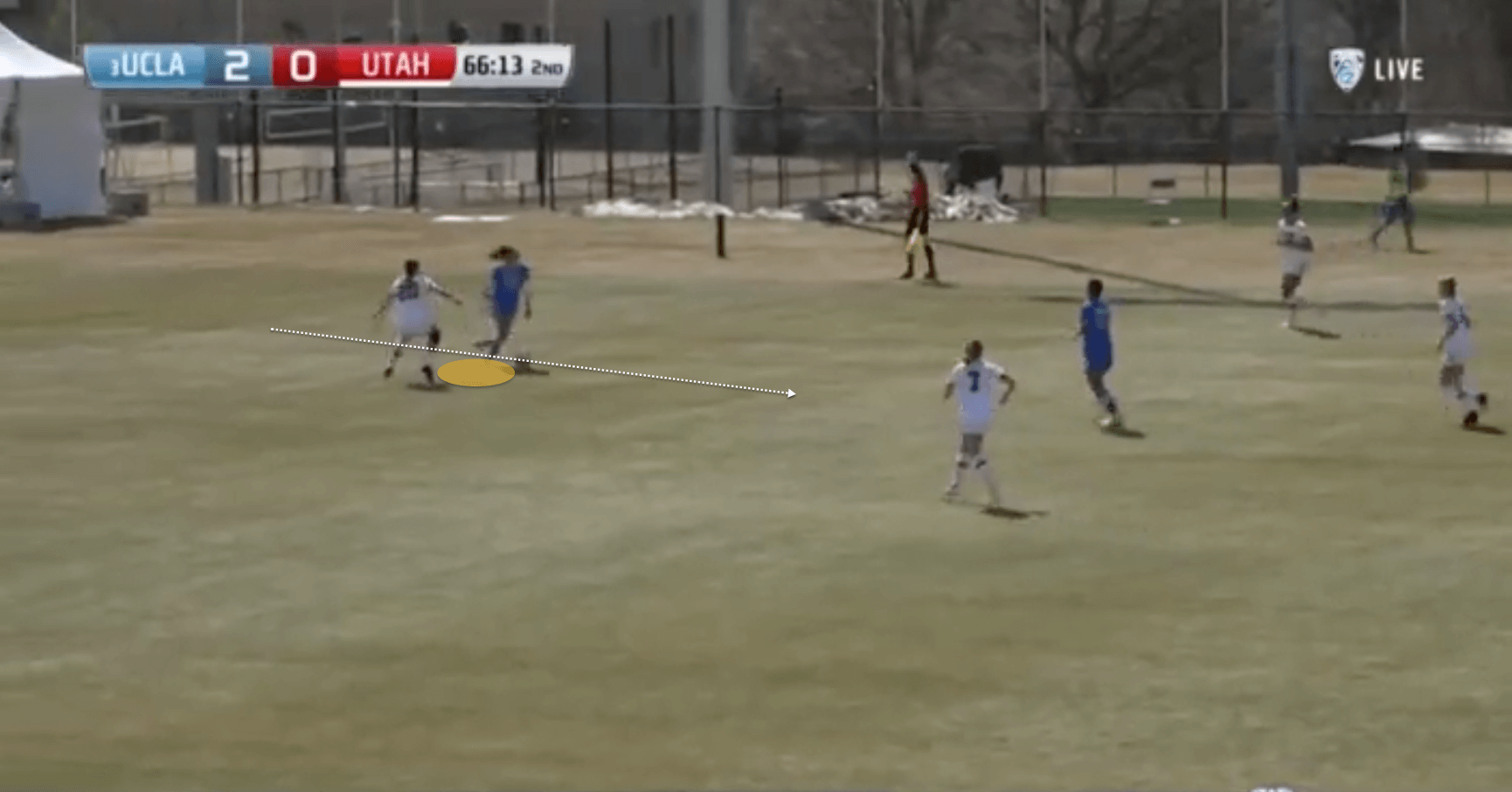 So whilst UCLA are patient in their build-up phase, as soon as they see an option to break the press and play forward, they do it swiftly. They can quickly turn circulating the ball around their own 18-yard-box into secure possession on a fast attack much farther up the pitch.

Otherwise Canales is very comfortable dropping in to receive despite being marked, and will engage in quick interchanges with her midfield teammates to draw in the opposition before using the wings to continue progressing the ball.

They use these quick interchanges and triangles to advance possession further forward too, which we will come onto in the next section.

Otherwise, when building from the back, UCLA are committed to beating the press with short passing football, and rarely look to play the long ball. They have a strong belief in ensuring possession is retained and controlled with the back line looking to break almost any kind of press. 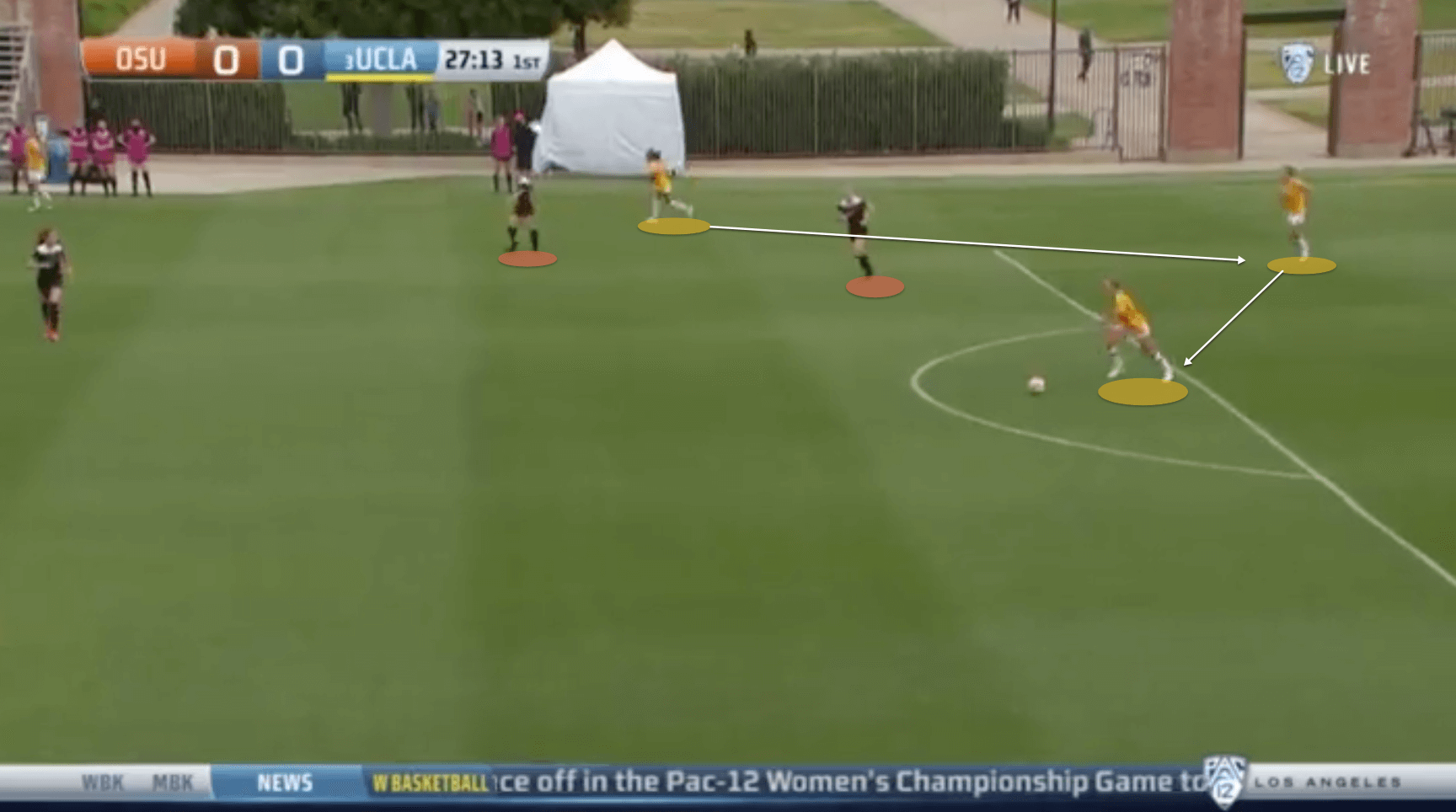 If they do play more direct passes, these are either aimed to hit the feet of Fishel up front or it’ll be used in the case that one of the defenders has seen the opportunity for the long through pass for an attacker (most often a winger) to run onto in behind. However, this is a rarity, and they have great belief in their ability to bypass any kind of press.

Canales will facilitate more direct passes for the defence by initially showing for the ball, before drifting into the full-back space. This opens a passing line for the centre-back to break the lines and hit Athens or Sheehan in between the lines. 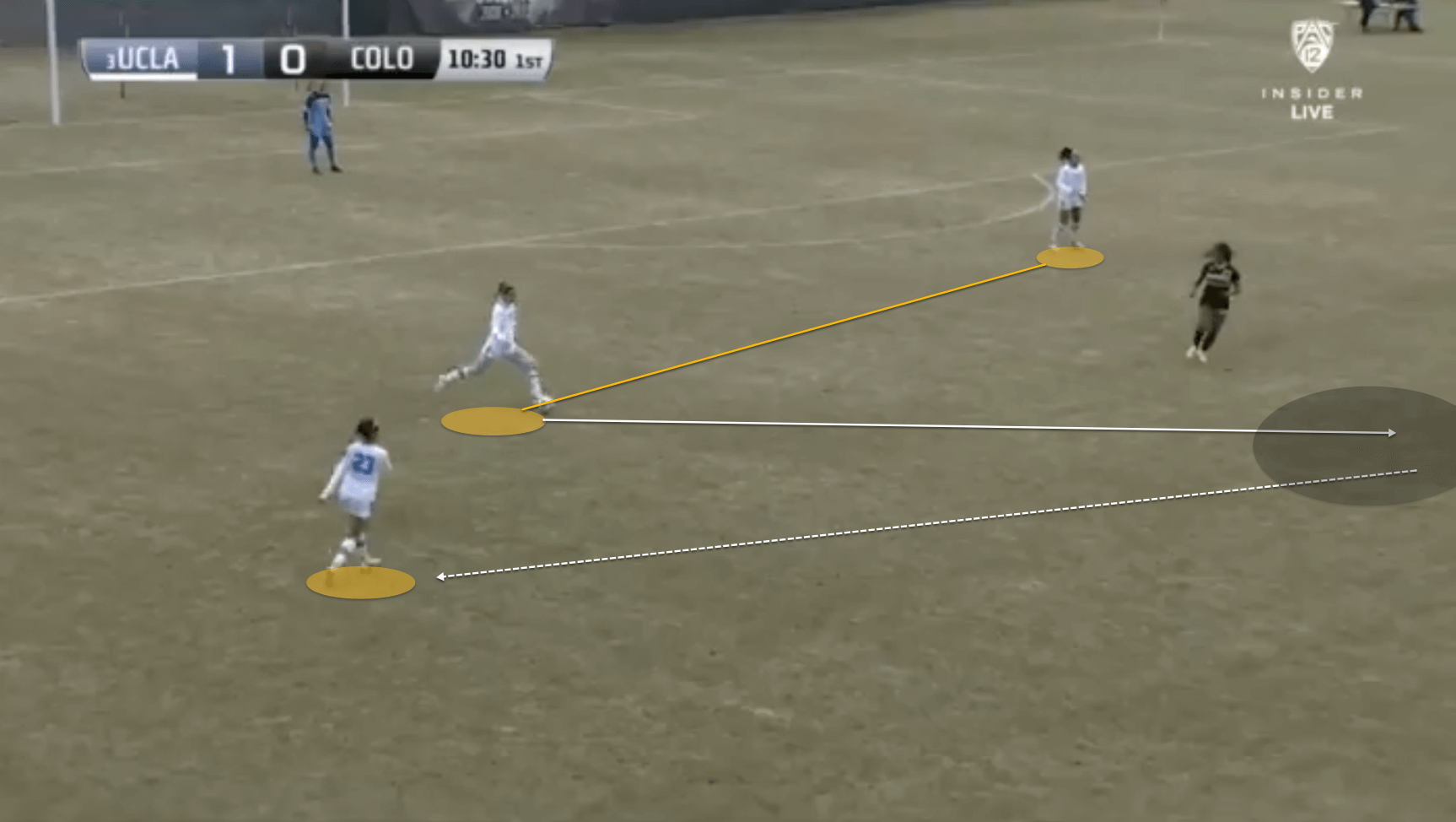 In the above image we can see Cananles dropping into the right-back space and this results in the right-back pushing forward and this allows Turner to play more centrally, giving UCLA a stronger central presence. As the ball is played into the midfield there plenty of options around the ball for UCLA to quickly secure the ball and continue the attack with a wide presence still. 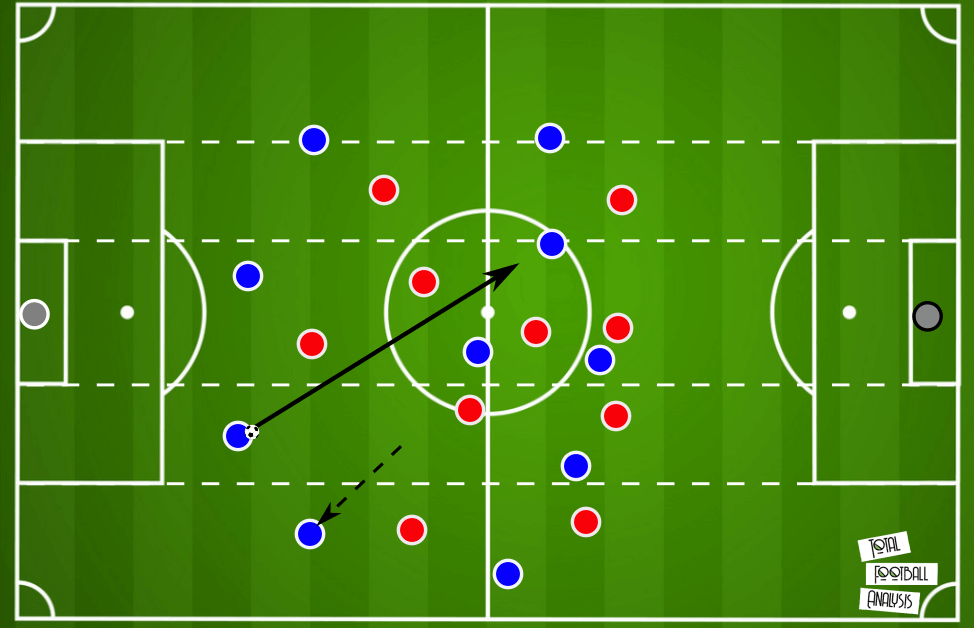 UCLA’s wingers will move inside. Starting from their wide position they will look to cut inside and hit the space between the opposition full-back and centre-back, whilst the ball is on the opposite flank. Both Novak and Turner have the pace to hurt teams that leave any space behind the back line without a keeper with a high position, and through-passes like in the image below represent a constant threat. 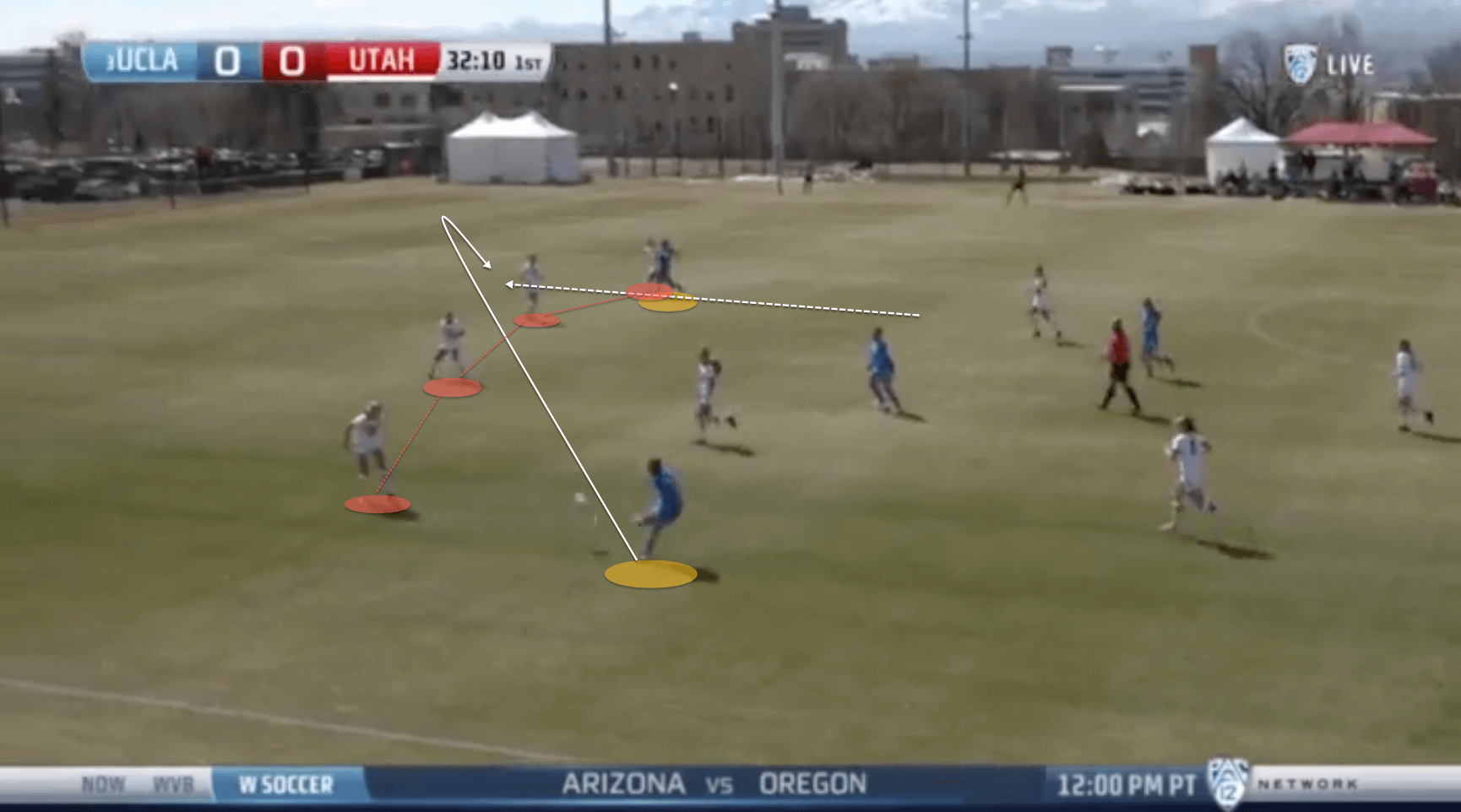 Both Athens and Sheehan play a key part in attack and position themselves close to the wingers and the centre-forward. Just as in the build-up phase they use triangles to advance the ball. The central-midfielders shift across creating a basic triangle pattern with the full-back and the winger, where they engage in quick interchanges whilst using the third-man pass option to take advantage of the numerical superiority. 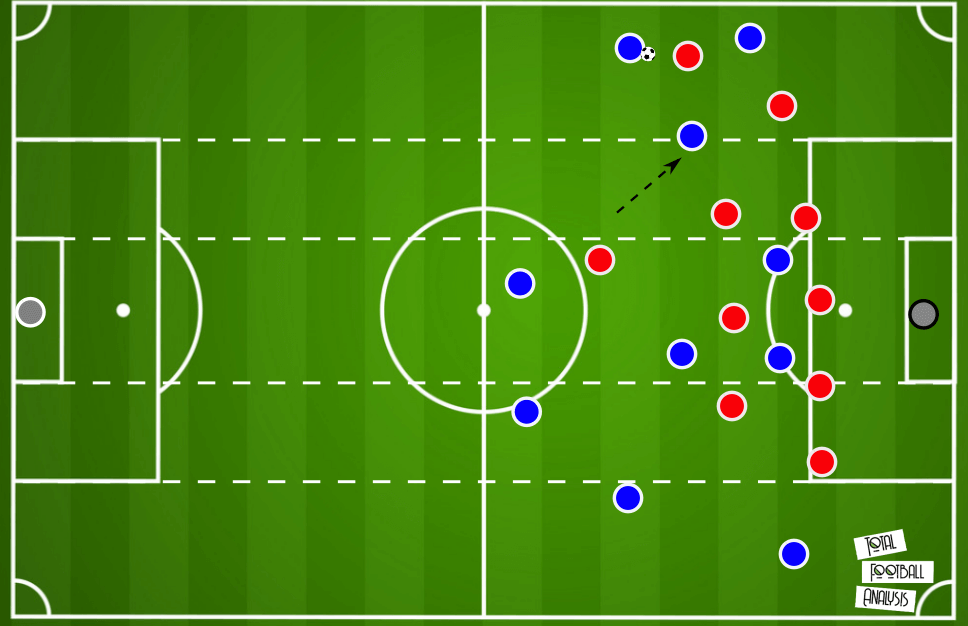 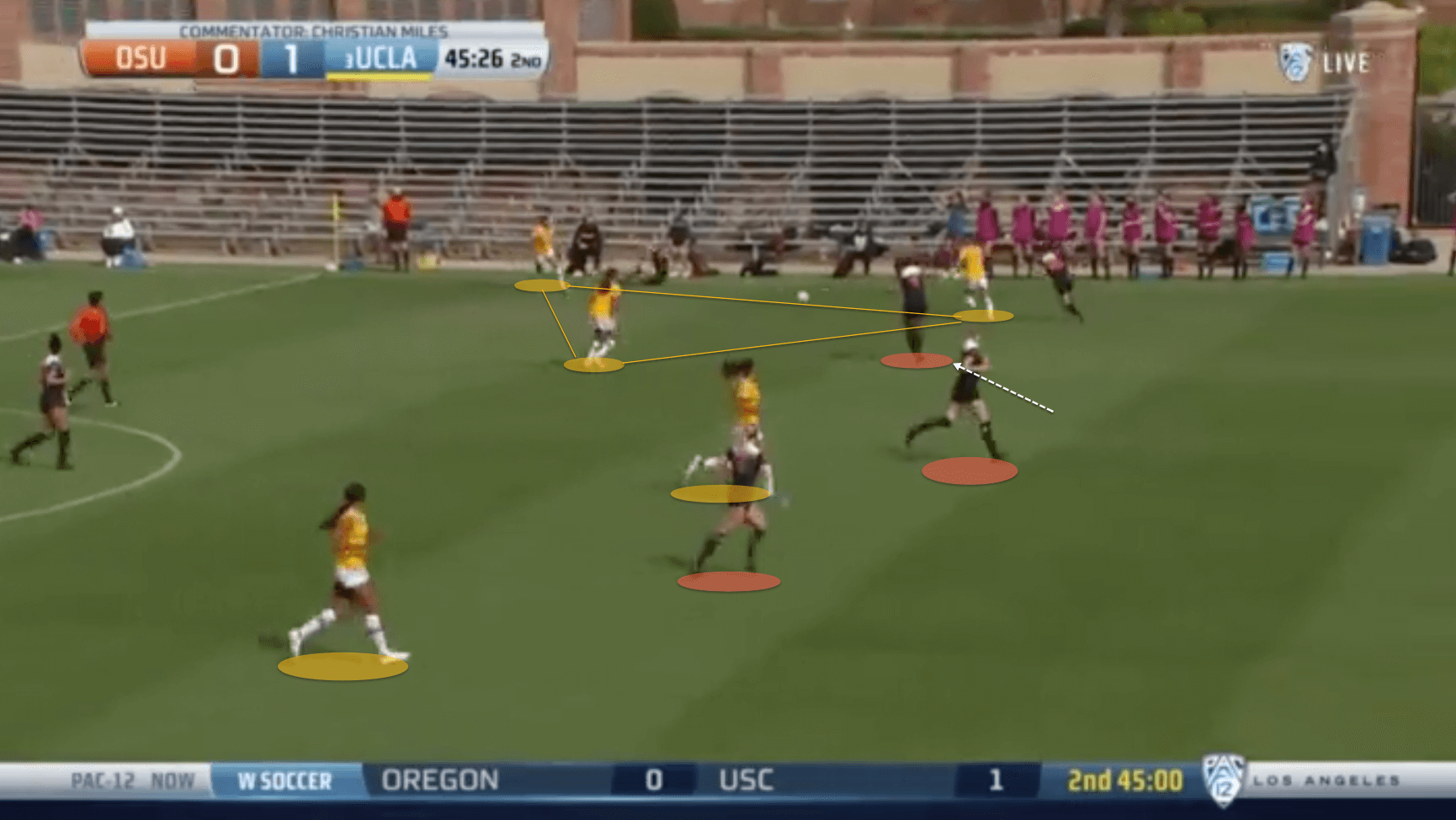 The central-midfielders play close enough to the centre-forward where they can rotate into the front line as well. This gives the centre-forward more freedom to drift across the width of the pitch. In the image below we can see this pattern occurring. 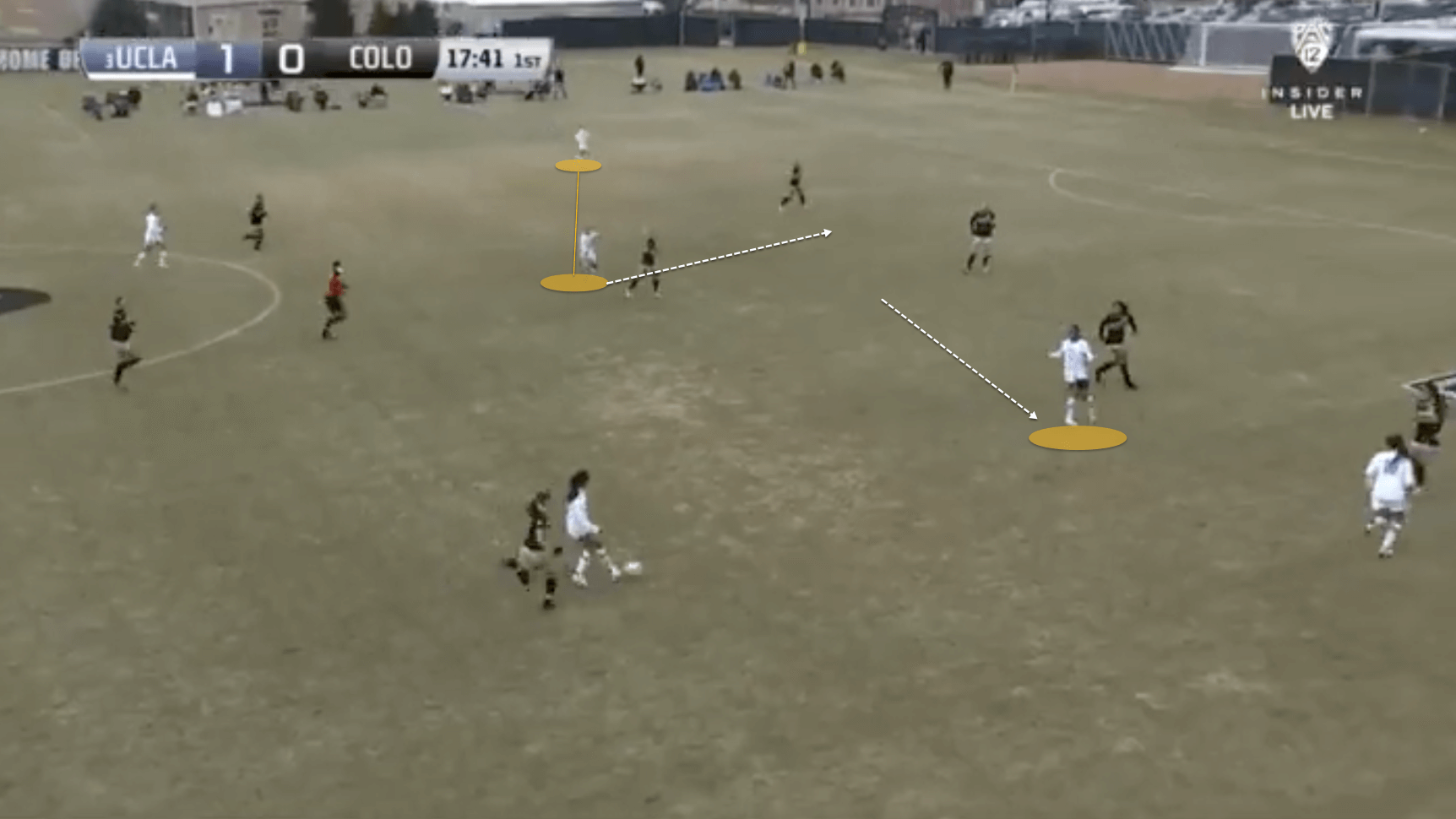 In this example the opposition centre-back drifts across whilst UCLA’s central-midfielder pushing forward occupies Colorado’s right-sided centre-back and right-back. In doing this they keep their defence narrow, whilst UCLA have a potential overload option on the left flank, which we can also see in the image above.

If the centre-back doesn’t shift across with UCLA’s centre-forward then this allows them to get on the ball, and again create an overload on the opposition full-back with their ball-near winger. 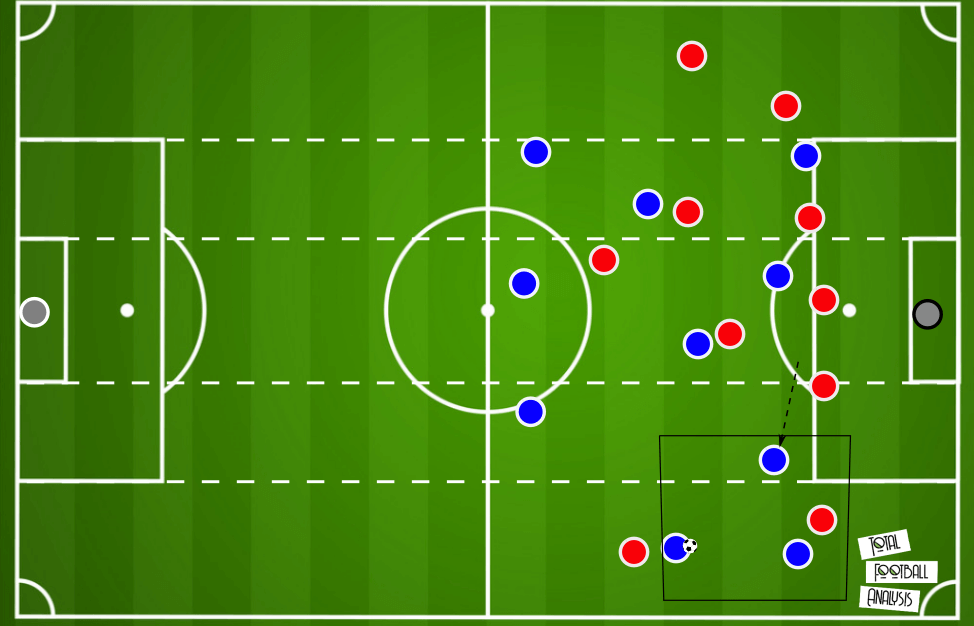 Teams should be aware, however, that UCLA are an aggressive attacking team, and there are times where both full-backs push forward and Canales doesn’t drop particularly deep to protect her centre-backs. If the opponent is bold themselves, and leaves two centre-forwards up in the defensive phase, they can create a 2v2, and potential for swift counter-attacks. 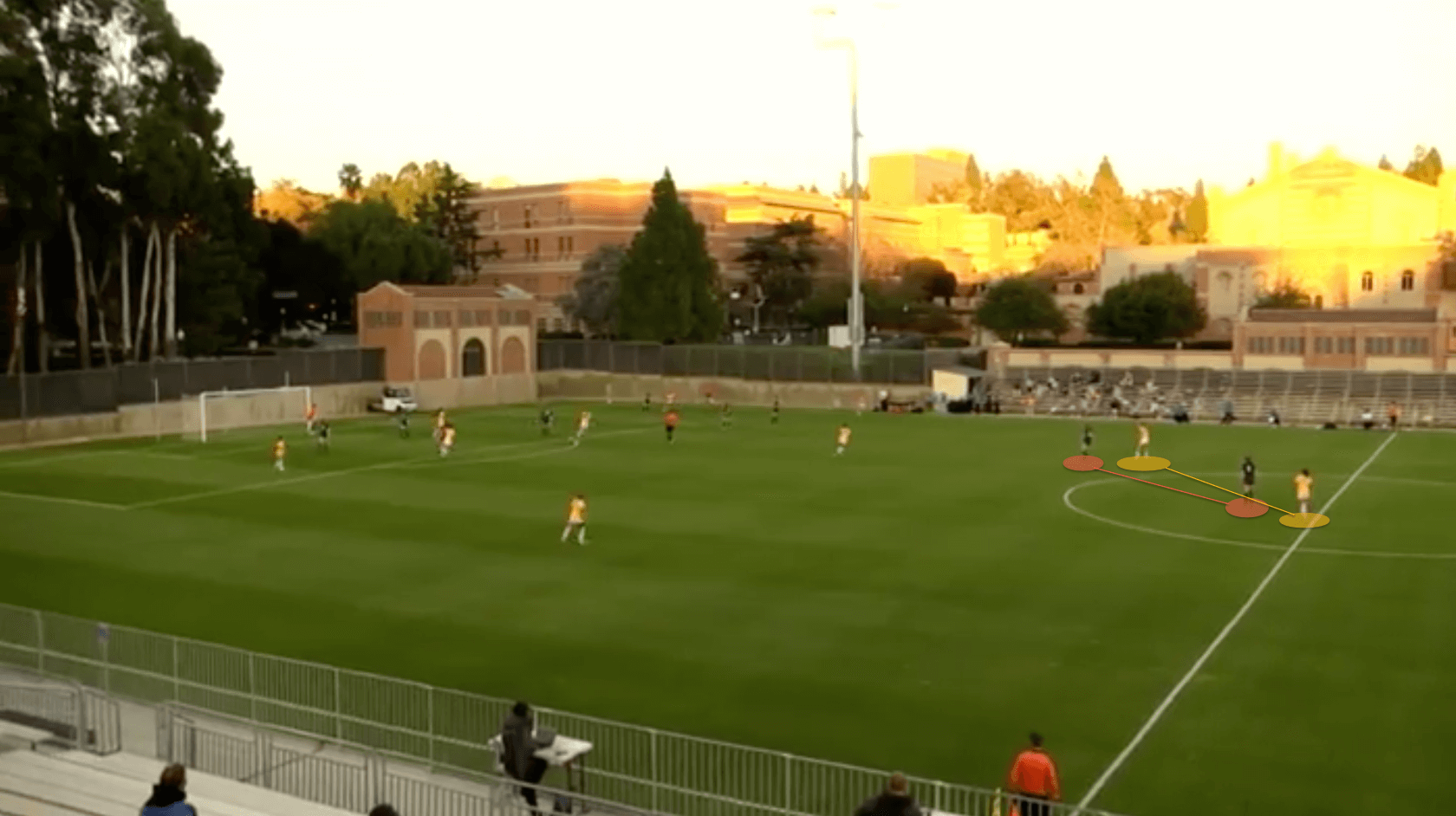 UCLA are a team with a clearly defined style of play and a core of talented, but experienced college players who clearly understand Cromwell’s game model down to a T.

Parker, Pederson, Rodriguez, Athens, Sheehan and Canales are all in their Senior seasons and whilst the NCAA have approved an extra fall season of eligibility due to Covid, they are nevertheless coming to the end of their college careers. There are some potentially big losses coming with this outgoing group, but there is a core of freshman and sophomore in place ready to take overf. With the likes of Fishel, Turner, Novak, Riley and Edelman already being key players at such a young age, the future of UCLA soccer is in safe hands. 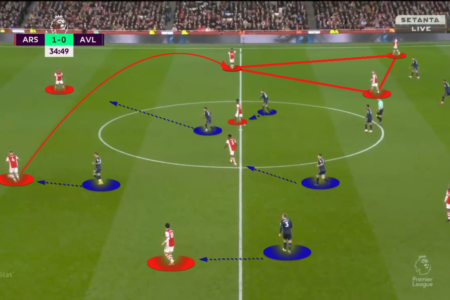 With 150 million pounds spent and new additions within the squad with the likes of Martin Ødegaard from Real Madrid, […]