This third part of the finding the best players in the Belgian Pro League series will analyze full-backs. This data analysis includes full-backs, but also wing-backs who played a minimum of 600 minutes in the league this season. In the end, this analysis will produce a list of best full-backs in the league who have the potential to make a step forward in their career.

Hopefully, we will find players who are good at playing on both ends of the pitch. In recent years, full-backs are often connected with team success on the field. Looking at players such as Liverpool‘s full-back duo, Andrew Robertson and Trent Alexander-Arnold, their impact on the flanks with their runs and crosses is clear. Every team now looks for similar type of players.

The first section of this data analysis consists of the player’s ability to make progressions down the field either with a pass or a run. Progressive runs are a good indicator of whether a full-back can carry the ball into more advanced areas. Progressive passes can give us an idea of how often player tries advanced solutions. 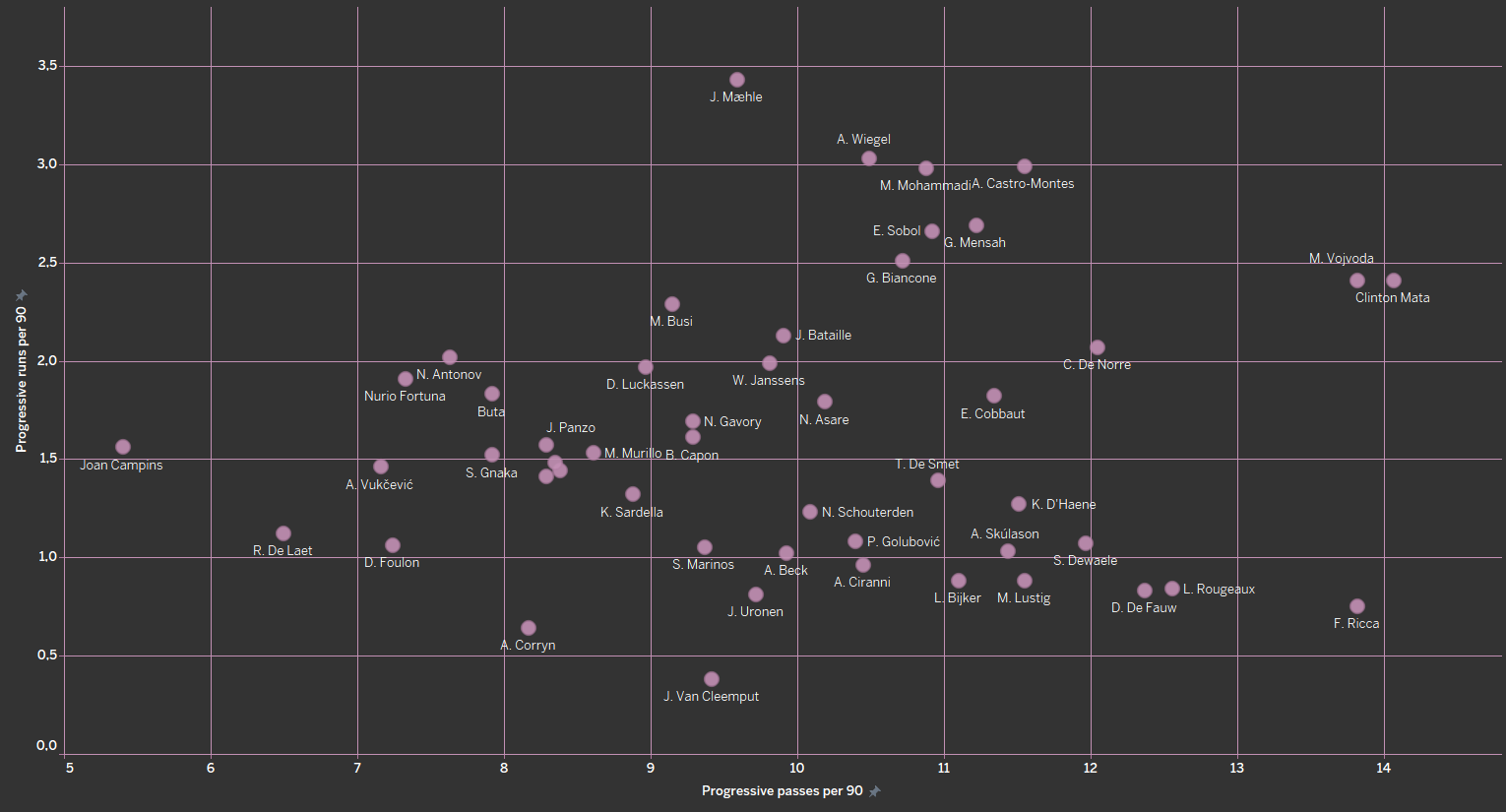 On the graph above we can see a few interesting players. We will pick those who are above average in both statistics and could be amongst the best in other sections.

Clinton Mata is right-back playing for Club Brugge. The Angolan defender has played as a right centre back in a defensive trio for half of his appearances. He is averaging 14.07 progressive passes per 90 which makes him the best in that metric compared to the other full-backs. Clinton Mata is delivering 2.41 progressive runs per 90 as well.

Mërgim Vojvoda is part of the Kosovo national team. The 25-year-old right-back is close to Clinton Mata in terms of progressive passes with 13.82 per 90. The Standard Liege defender is averaging 2.41 progressive runs per 90 as well.

Castro-Montes’ teammate Milad Mohammadi plays as left-back. The Iranian international participates in the build-up with his 10.88 progressive passes per 90 and 2.98 progressive runs per 90.

Casper De Norre is a left-back who plays for Genk. The 23-year-old is averaging 12.05 progressive passes per 90 paired with 2.07 progressive runs per 90.

Giulian Biancone is a right-back playing for Cercle Brugge on loan from Ligue 1 side Monaco. The 20-year-old is averaging 10.72 progressive passes per 90 and 2.51 progressive runs per 90.

Eduard Sobol is a Ukrainian left-back who is playing for Club Brugge. He usually plays as a wing-back, which helps him get nice numbers when attacking. Sobol is averaging 10.92 progressive passes per 90 and 2.66 progressive runs per 90.

RB Salzburg loanee Gideon Mensah is making the most out of his spell at Zulte-Waregem. Mensah is averaging 11.22 progressive passes per 90 and 2.69 progressive runs per 90.

Crossing ability is necessary for full-backs in modern football. Many teams look for full-backs who can overlap wingers and whip dangerous crosses into the box. 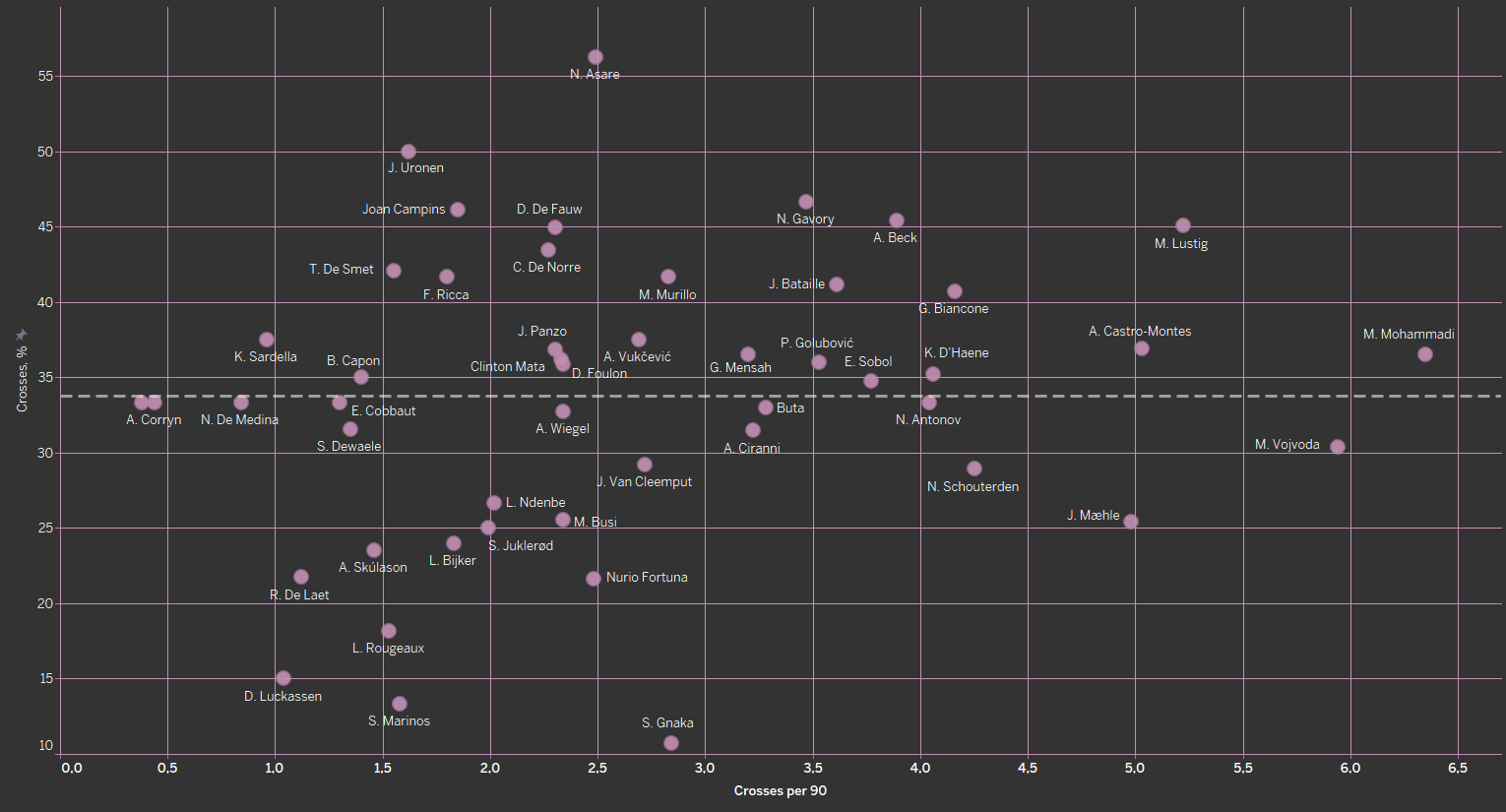 As we can see on the graph above there are players who we mentioned above that stand-out in this section too.

Mohammadi, Vojvoda and Castro-Montes are the ones who are attempting the most crosses compared to those we mentioned above. Mohammadi is attempting the highest number of crosses with 6.35 per 90. He is quite an accurate crosser with 36.52% accuracy. Vojvoda gets forward often which enables him to attempt 5.94 crosses per 90. He is below average crosser compared to the other full-backs, but for someone who attempts a high number of crosses, 30.41% accuracy is a great success rate. Castro-Montes gets into more advanced positions to cross as well. He is attempting 5.04 crosses per 90 with 36.9% of them finding teammates.

Mikael Lustig is a player worth mentioning. The well-known Swedish veteran who played most of his career for Scotland Premiership side Celtic, made transfer last summer to Gent. Right-back ability to cross with 45.07% accuracy is really impressive, especially when he attempts 5.22 crosses per 90.

Full-backs need to provide stability on the defensive end of the pitch as well. That is why we will evaluate the defending ability with two statistics: Successful defensive actions per 90 and PAdj interceptions (Possession adjusted). Those metrics are relevant because they don’t depend much on team playing style, but more on the player’s ability to contribute defensively. We won’t mention players who did not stand out in the first two sections because our goal is to find those who are good on both ends. 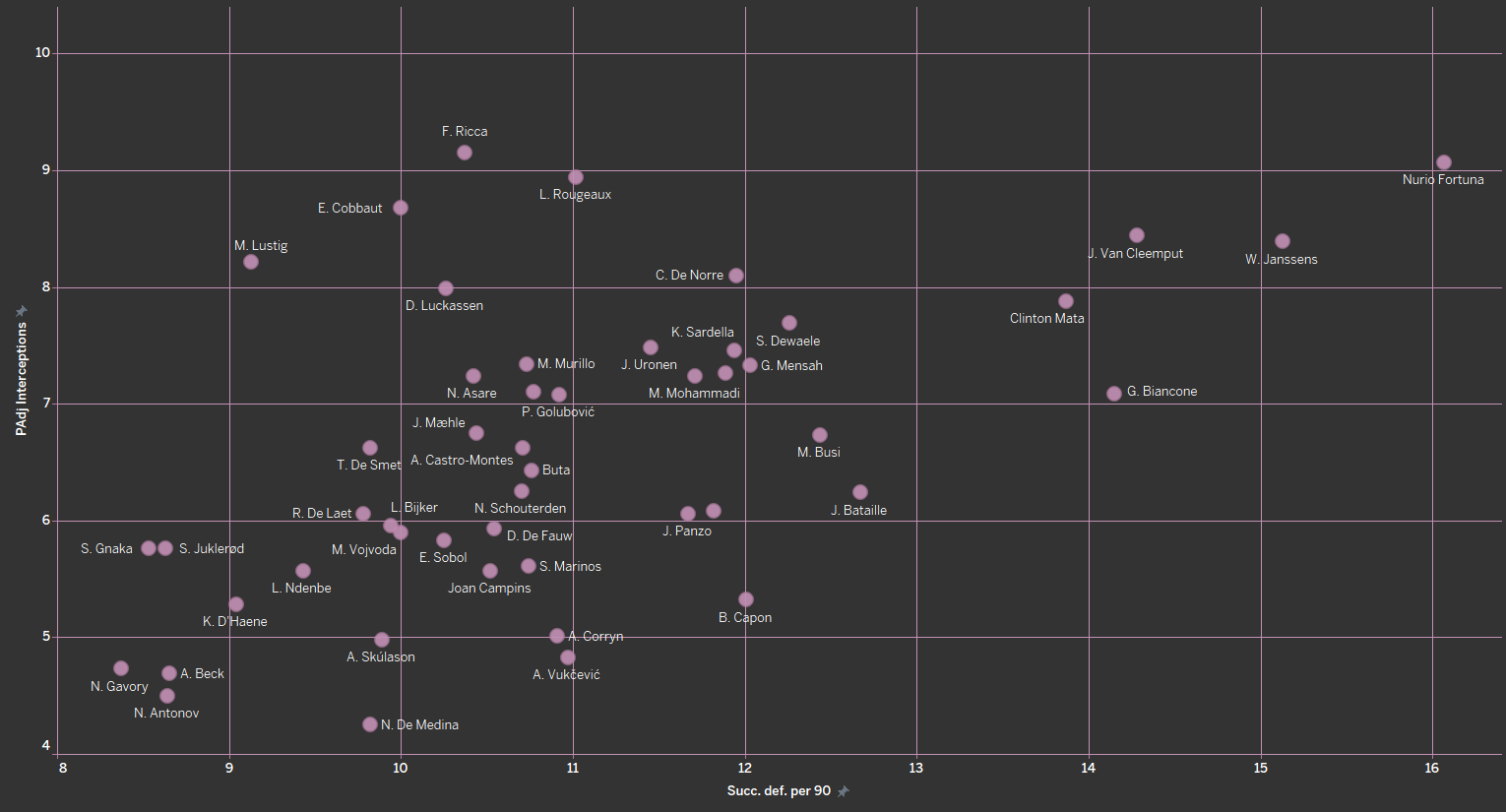 We will highlight those who have at least 11 successful defensive actions per 90 and at least seven PAdj interceptions. After determining the range for defensive statistics, we can see that five previously mentioned players are there.

Impact in advanced areas of the pitch

This is a pure insight into a full-back’s tendency to make an impact on the scoreline by attempting dangerous passes/crosses. Colour of the dots represent xA per 90. Red means they are having low xA and blue that they are dangerous in the attacking phase. 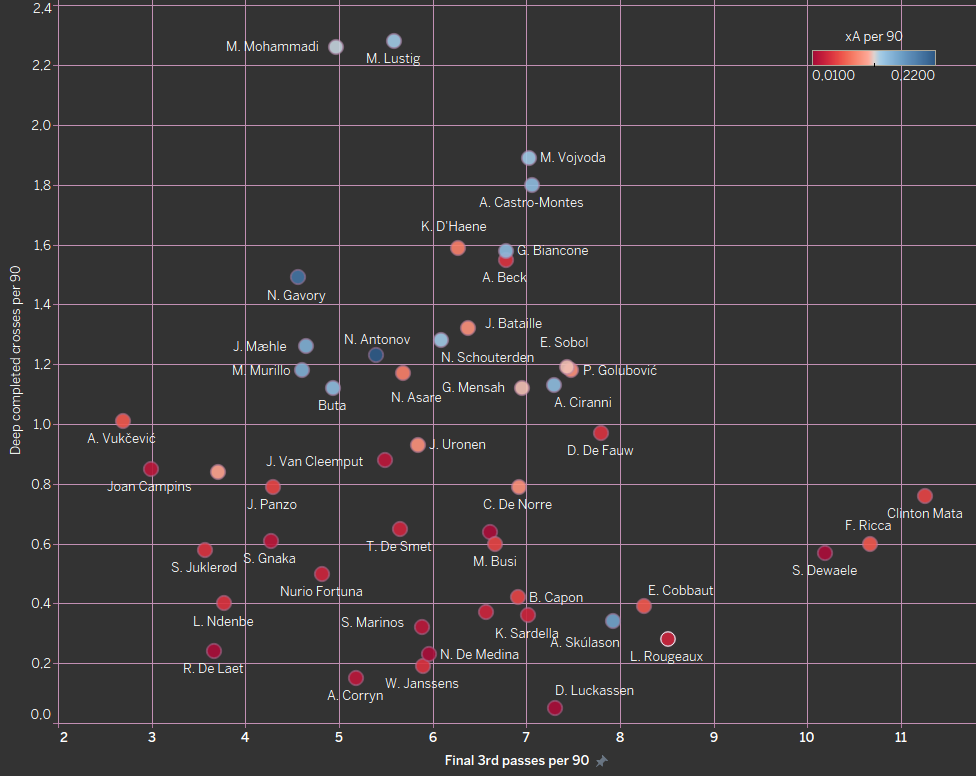 Vojvoda, Castro-Montes and Biancone are having similar positions on this graph. They average between 1.5 and 1.9 deep completed crosses per 90 and attempting between 6.8 and 7.1 passes to the final third per 90.

Mensah and De Norre are averaging between 0.75 and 1.15  deep completed crosses per 90 while attempting around seven passes to the final third. To evaluate Clinton Mata on this graph we need to mention again that he played half of his appearances as right centre-back. Considering his playing time as right centre-back it was expected from him to have this type of numbers at these two metrics. He attempts 11.26 passes to the final third per 90 because he played in a position distant to opposition final third. The low number of deep completed crosses per 90 is the effect of shifting him between positions as well.

This is the part where we will evaluate all the players we mentioned in the sections above. The table below compares players we highlighted in all the metrics we evaluated.

Comparison table will help us narrow the list from nine to three players all-round full-backs. We must eliminate Sobol and Vojvoda because they need to improve their defensive effort to get better as players. De Norre lacks offensive output, but unlike Clinton Mata, he has no reasons to attempt the lowest number of crosses compared to the others. Mensah seems average in all the metrics but could improve offensively. Mohammadi is in top 5 of all the metrics, except progressive passes and final third passes. His underperformance in those metrics is connected with his offensive positioning where he mostly gets the ball. Lustig is the greatest crosser and most experienced player compared to the others. Castro-Montes looks like a really good player but needs to improve his defensive ability. Biancone is in the top half of only two metrics: successful defensive actions(first) and crossing accuracy(third), but if he keeps progressing could be a great player.

This data analysis provided us with enough pieces of information to highlight the best three full-backs in Belgian Pro League based on their stats from this season. Those players should be scouted further to have more details about what they do on the field. Mikael Lustig is one of the candidates because of his ability and experience. Castro-Montes great performances benched Lustig, so we chose him over Lustig. Besides Castro-Montes is 11 years younger with future ahead of him.

Milad Mohammadi – The Gent left-back shows really impressive numbers especially in the attacking phase. What gives an edge for Mohammadi compared to the others is that he plays for his national side regularly with 25 caps already. Opponents shouldn’t leave him open to cross because won’t hesitate to deliver a dangerous ball into the penalty area. Transfermarkt values him at 2.8 million euros, which will probably rise as he has not reached his peak.

Clinton Mata – Mata is playing the best season of his career. He is an inevitable part of Club Brugge first team in the Belgian Pro League and Champions League. Mata’s versatility helps his coach to rotate between three and four defender formations. With enough matches behind him, he is ready to take a step forward in his career. Mata probably has future as centre-back in formations with three centre-backs, because of his speed, anticipation and passing ability. Transfermarkt values him at 6.5 million euros.

Alessio Castro-Montes – It was really hard to choose the third player, but Castro-Montes shows his all-round abilities and he is still young with space to improve. The Gent right-back scored two times this season and made four assists which is nice attacking output. He needs to improve his defensive effort if he wants to play in a better league. Transfermarkt values him at 2 million euros what seems like a bargain given his potential. Further scouting would help us to get insight into how he can improve his game.

Mohammadi and Clinton Mata at their peak and Castro-Montes is a player with big potential. Further scouting can help us find out how to get the best out of these players. It would be good to know what team philosophies would suit them the most.

Check out the previous two parts of this series here:

Part One: Finding the best centre-backs in the Belgian Pro League – data analysis