It is time for the next instalment of my series in which we use data analysis to identify interesting players in certain markets. While at this time of the season we are starting to come to the end of the period in which we have to regularly question the sample size and minutes played of a player the league that I will be looking at has no such issues.

The Swedish Allsvenskan is a summer league that runs from March to November every year. While this tends to have knock-on effects for their clubs who do well in European competition and effectively have to compete continentally in their off-season it also means that when the rest of Europe is in their off-season we have competitive football to keep us entertained.

The Swedish top-flight also has a reputation as a league in which young players are given the opportunity to develop with clubs throughout the league giving minutes to homegrown players and recruiting young players from abroad. One trend in recent seasons has seen young players from Africa making Sweden their first destination in Europe before leaving for a higher level of competition after a year or two.

I have used data analysis techniques to identify five players who are having interesting seasons this year.

Data remains a key part of the recruitment process but it is not the only part. Live scouting, video scouting and general information gathering are all also important considerations when you are looking to make decisions from a recruitment point of view. 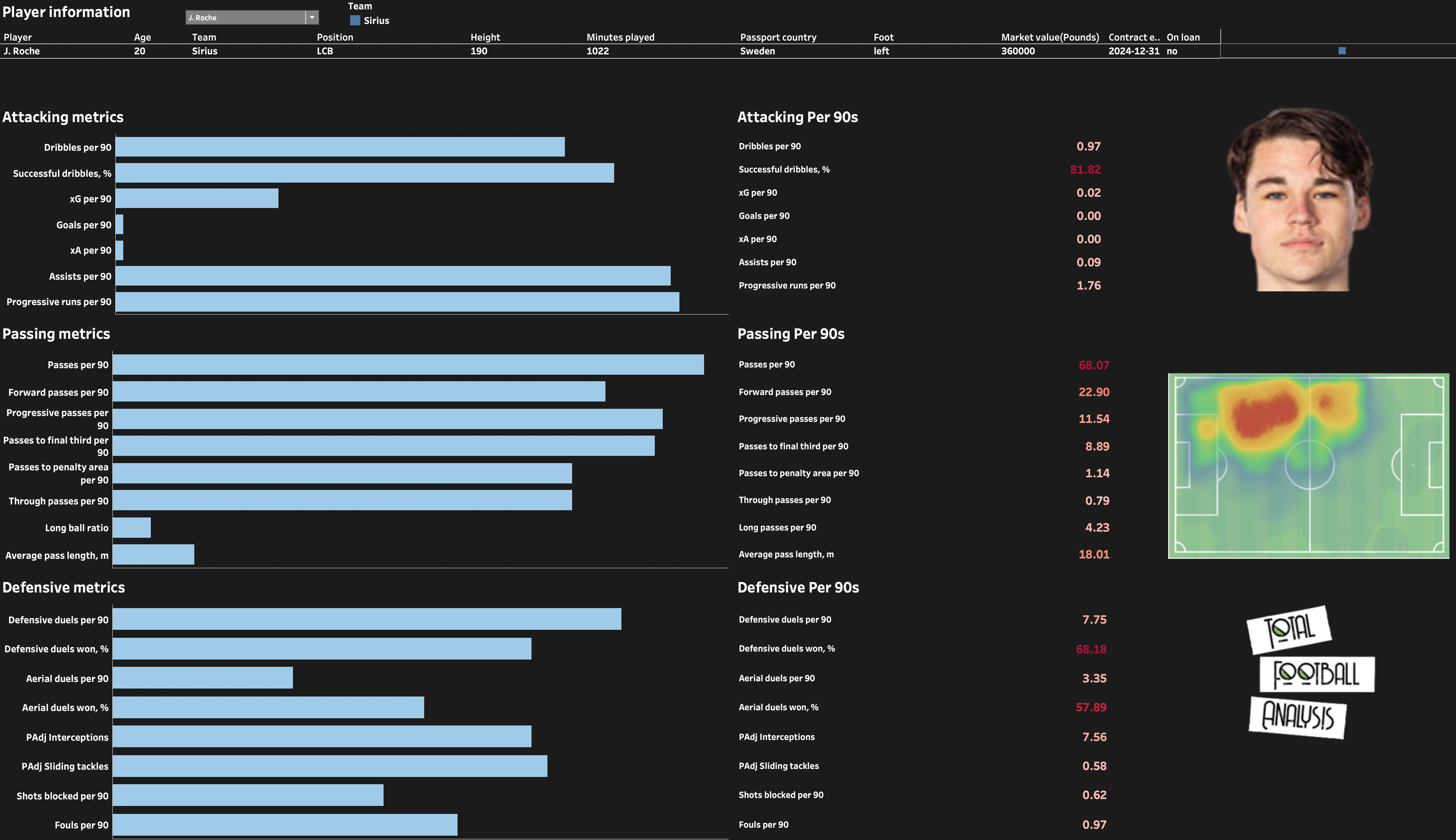 The first player on our shortlist is the 20-year-old Swedish central defender Jamie Roche. He is currently contracted to Sirius having come through their youth system and is a versatile defensive player who is comfortable as a central defender or as a central midfielder who can sit in the ‘6’ role. With that said I believe that his development will be better served if he continues his development as a central defender. He is predominantly left-footed and he has the profile to suggest that he would be comfortable playing as part of a back three of in a four at the back system. This versatility can be especially important as teams are increasingly becoming more fluid in the systems that they look to play.

This season has seen Sirius tend to play as the left-sided defender in a back three. He has played 1022 minutes in the Allsvenskan so far this term. His metrics from a passing and progression and from a defensive perspective are very promising. He is a volume passer who is averaging 68.07 passes per 90 with 11.54 of those per 90 being classified as progressive as he regularly looks to find line-breaking passes or opportunities to play diagonals that change the angle of the attack. He is also averaging 8.89 passes to the final third per 90 with the ability to play the ball from the first line into the feet of the strikers. His defensive metrics also look extremely good with no stand out metrics but a balanced look across all of the key areas. He is averaging 7.75 defensive duels per 90 with a success rate of 68.18% as well as 3.35 aerial duels per 90 with a success rate of 57.89%. These outputs in terms of duels are combined with an impressive 7.56 possession adjusted interceptions per game.

Roche profiles as a player who is likely to become of interest to teams in the likes of Holland and Germany although it would make sense for him to remain in Sweden for at least one more season before making any move to join a more competitive league. 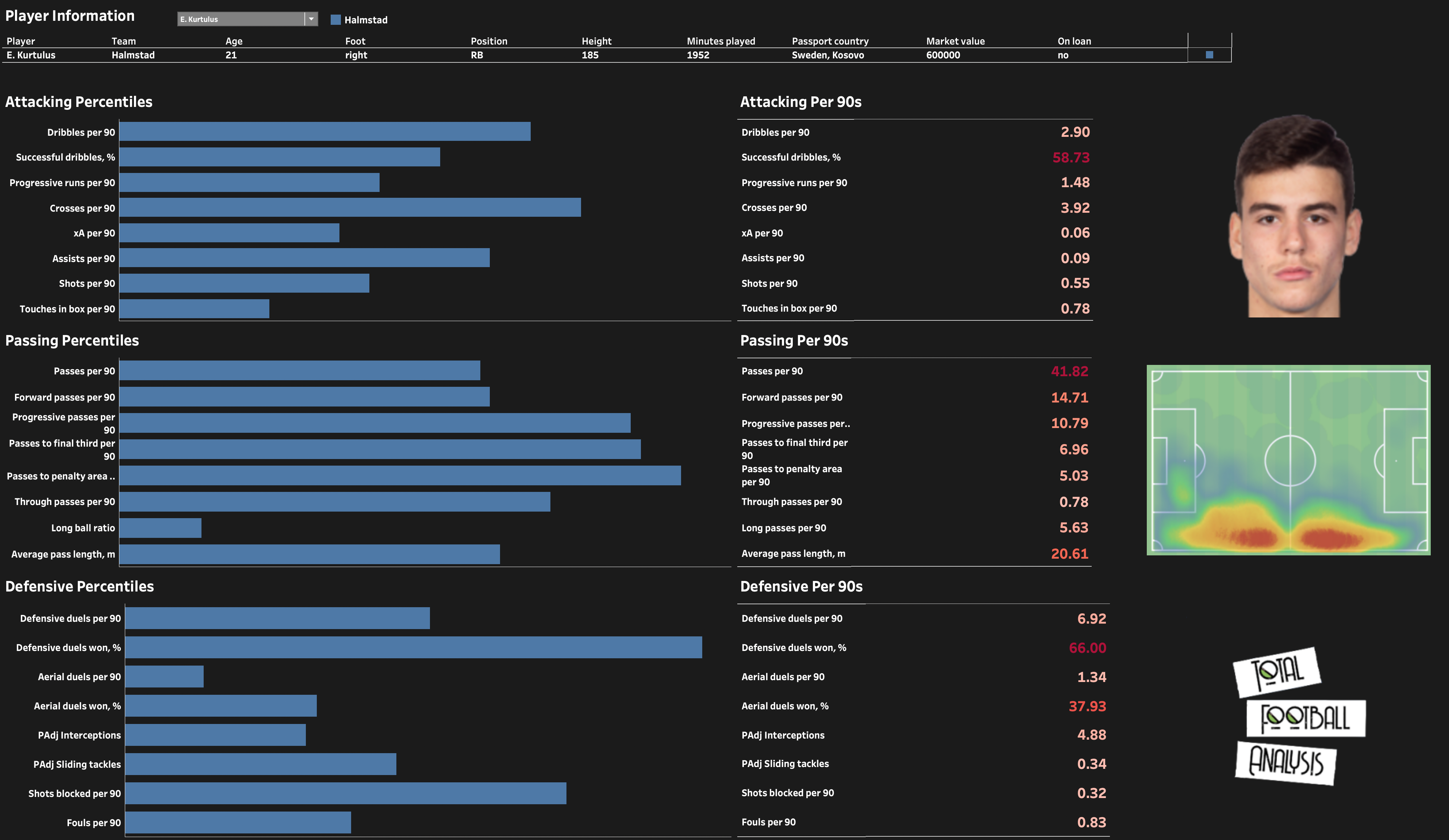 The next player on our list is the 21-year-old Kosovan fullback Edvin Kurtulus. He is currently contracted to Halmstadt BK although he looks to have already agreed a move to Hammarby in January of next year. He was born in Sweden to Kosovan parents and this year he accepted a call up to the Kosovan U21 setup.  Kurtulus is a product of the Halmstadt youth academy and has so far spent his entire career at the club. For the most part, he has played as a right-back in a 4-4-2 system but he could easily transition to play as a wingback. Kurtulus is listed at 185cm | 6’2 and he has a broad and powerful build which, combined with his willingness to work in the attacking and defensive phase, makes him a very difficult player to play against. This season Kurtulus has played 1952 minutes in the Allsvenskan.

He tends to maintain the width in his side’s attacking phase although he does not display a preference for carrying possession through dribbling. Instead, he will look to receive before either playing progressive passes that access players in more advanced areas of playing crosses into the penalty area. This season he is averaging 3.92 crosses per 90 along with 5.03 passes into the penalty area per 90. When playing in the build-up phase he contributes well and is comfortable in possession of the ball as he averages 10.79 progressive passes per 90 and 6.96 passes to the penalty area per 90. In the defensive phase, Kurtulus is also active as he is averaging 6.92 defensive duels per 90 with a success rate of 66%.

Although Kurtulus has already agreed to move to Hammarby this is likely to be a move that lasts one or two seasons at the very most. He profiles as a fullback who would do very well indeed in the likes of the Bundesliga or Serie A. 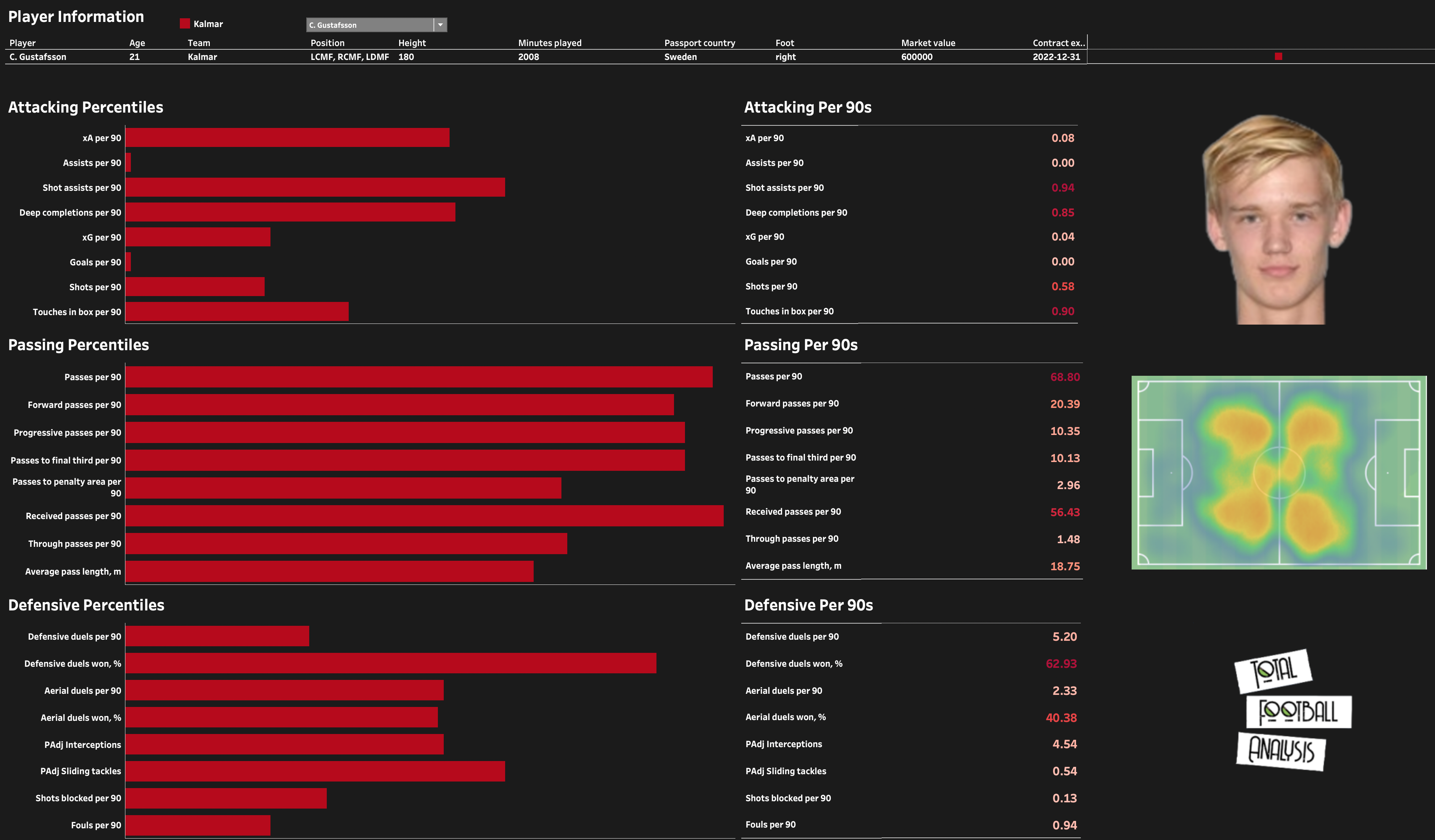 He profiles clearly as a central midfielder who moves the ball effectively through the thirds and joins together the attack and defensive units. You can see from the heatmap in his profile above just how much of the central spaces of the pitch Gustafsson covers. This season he is averaging 68.80 passes per 90 with 10.35 progressive passes per 90 and 10.13 passes to the final third per 90. He is capable of playing line-breaking passes that access the central areas and of looking for diagonal passes that switch the emphasis of the attack. He is also averaging 2.96 passes to the penalty area per 90 as he does have the ability to play in the final third.

I would be very surprised if Gustafsson is not already being closely scouted by sides in the likes of Holland and Belgium and a move to the likes of AZ Alkmaar would make a lot of sense at this point. 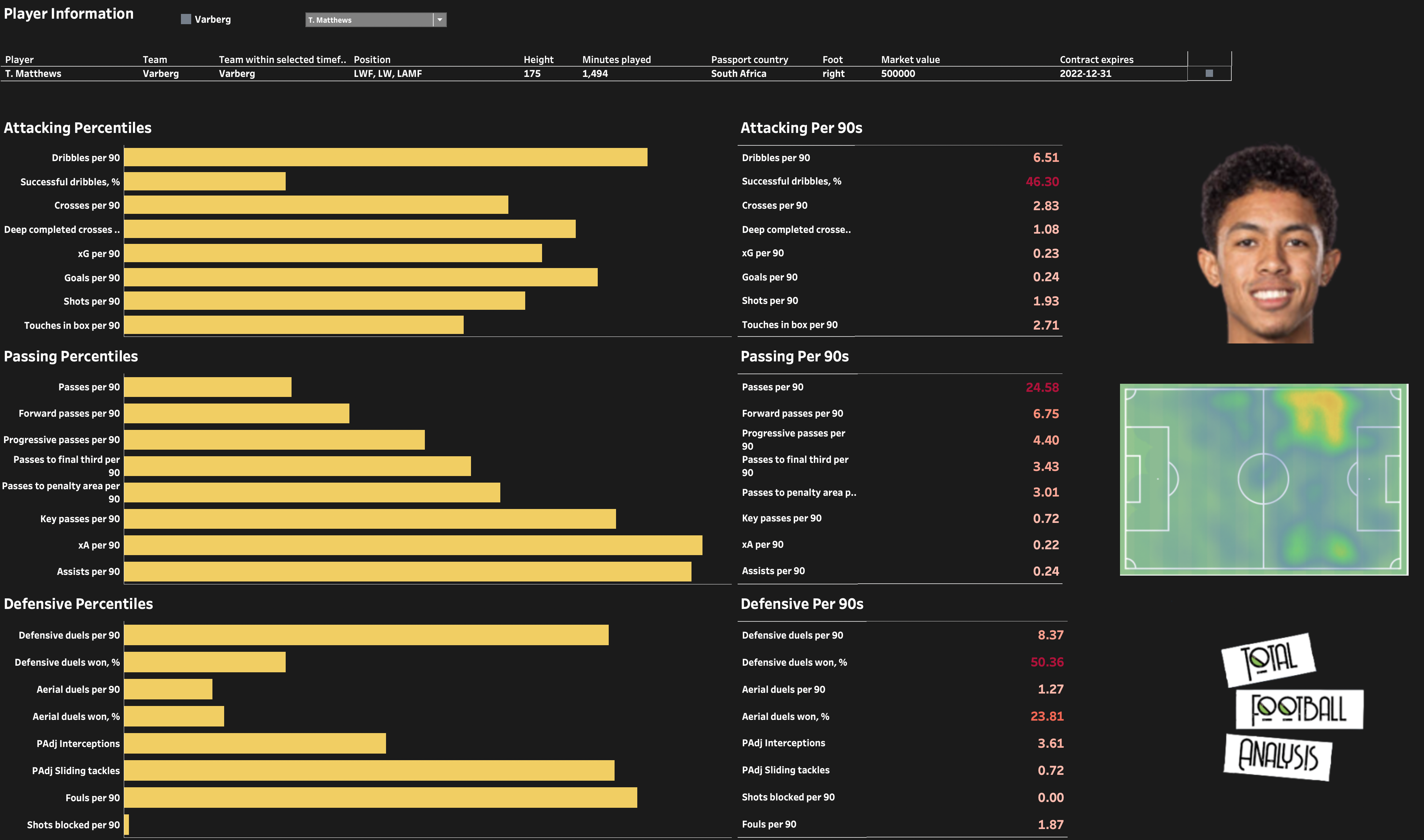 The fourth player on our list is the 21-year-old South African winger Tashreeq Williams. He is currently contracted to Varberg in the Allsvenskan and has so far been capped by the South African national team up to U20 level. Williams has had a varied career path to this point having initially moved to Europe in 2018 having left Ajax Cape Town in South Africa as he moved to Germany to join Borussia Dortmund. He had two loan spells with the first in Holland with Utrecht and the second in Sweden with Helsingborg. In 2020 he left Dortmund and moved to Sweden on a permanent deal to join Varberg. Williams is a dynamic attacking threat who is predominantly right-footed but capable of playing on the left or on the right side of the attack. This season so far he has played 1494 minutes in the Allsvenskan.

Matthews has already had a varied career and I would not be surprised to see him move sooner rather than later to a more competitive league. His attacking profile will attract a lot of attention. 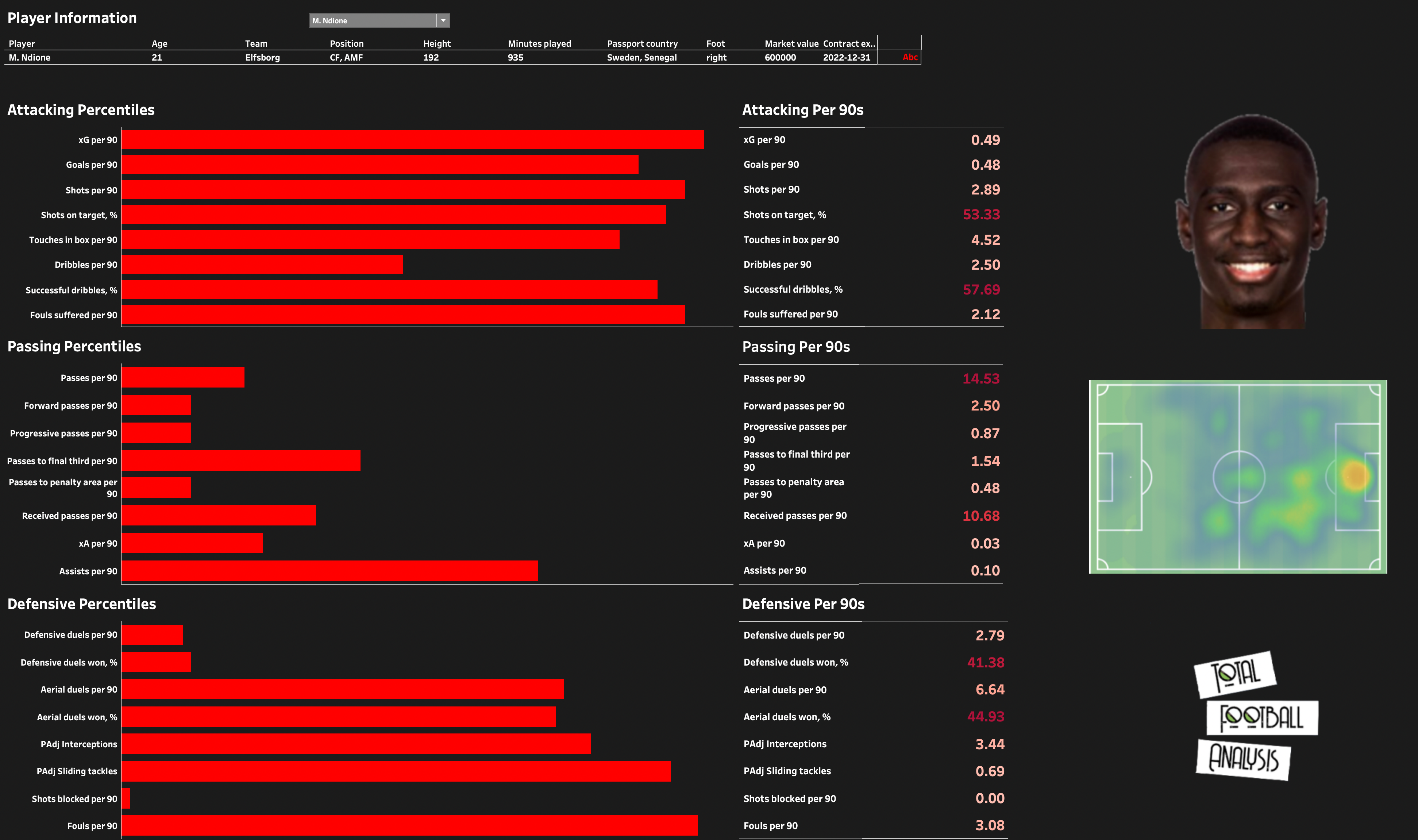 Marokhy Ndione is a 21-year-old Swedish striker who is currently contracted to Elfsborg in the Allsvenskan. Ndione was born in Sweden and he has been capped at international level by the Swedish national side up to U18 level. He would also, however, be eligible for the Senegalese national team. Ndione is a real handful for defences as he is listed at 192cm | 6’4″ tall but he has pace to attack defensive lines in behind and the strength to play with his back to goal. He is a product of the youth academy at Elfsborg although he spent the 2020 season on loan at Orgryte. This season so far we have seen NDione play 935 minutes in the Allsvenskan and his attacking outputs have been excellent.

So far this season he is averaging 0.48 goals per 90 from an xG per 90 of 0.49. His underlying attacking metrics are also very promising with 2.89 shots per 90 and 4.52 touches in the opposition area per 90. He is a forward player who provides an attacking platform that his team can build their attack from as he offers the ability for teammates to play the ball into his feet of body or to cross the ball from deep areas knowing that his physical profile will mean that he has a real chance of making something happen for his team.

The Belgian league stands out immediately as an interesting next step for Ndione as physical strikers who also carry a goal threat tend to be very popular there.

The Allsvenskan continues to be an intriguing league for the development of young players. The mix of styles of play across the league gives players good experience in terms of learning to play in slightly different ways. Still, the players shortlisted above will likely be on the move sooner rather than later.