Juventus secured their fourth win in the UEFA Champions League group stage against Dynamo Kyiv , who are now officially out of the competition and who will fight for the third spot with Ferencváros in order to know who will qualify to the UEFA Europa League knockout phase.

For Juventus, this win was important in terms of gaining more confidence and more importantly in continuing their battle with Barcelona over the first spot of the group. Even though beating Barcelona at Camp Nou with a big goal difference sounds unlikely, Andera Pirlo’s team will do their best to play all their cards during their final group stage fixture hoping to have luck by their side.

In this tactical analysis article, I will focus on Juventus’ attacking tactics and performance while making an extensive analysis of what happened during this match and why Dynamo Kyiv lost with three goals.

Andrea Pirlo opted for a 4-4-2 formation in this match with Wojciech Szczęsny as a goalkeeper, Merih Demiral as a right-back, Leonardo Bonucci and Matthijs de Ligt as centre-backs and Alex Sandro as a left-back.

The midfield was composed of Federico Chiesa on the right-wing, Weston McKennie and Rodrigo Bentancur as central midfielders and Aaron Ramsey as a left winger, while Cristiano Ronaldo and Álvaro Morata formed the attacking duo.

For the visitors, Mircea Lucescu started the match with a 4-1-4-1 formation with Heorhiy Bushchan as a goalkeeper, a defensive line formed of Tomasz Kędziora as a right-back, Illya Zabarnyi and Denys Popov as centre-backs and Vitaliy Mykolenko on the left flank.

Ahead of them played the captain Serhiy Sydorchuk who was the defensive midfielder and then the midfielder line included Viktor Tsyhankov as a right winger, Volodymyr Shepelev and Mykola Shaparenko as central midfielders and Gerson Rodrigues on the left-wing while Benjamin Verbič was the team’s striker. 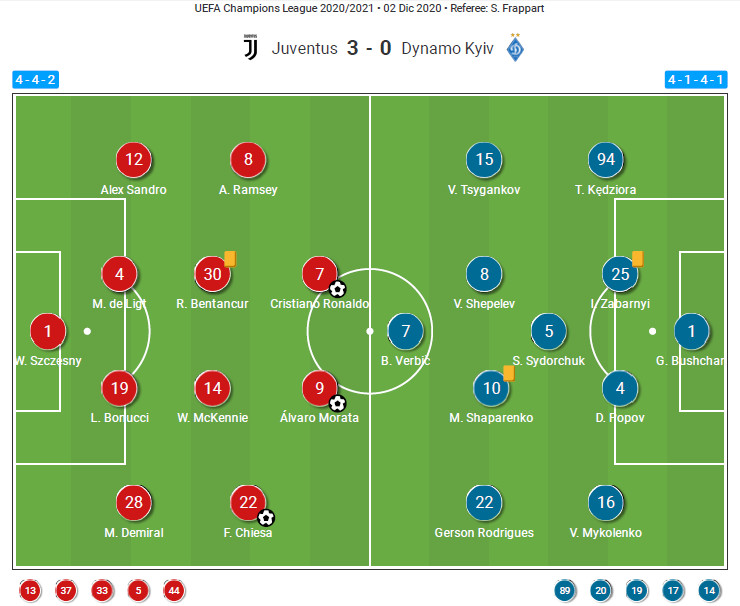 Juventus started this match with determination to score, but found a well-organised opponent and therefore they had difficulties in threatening Dynamo Kyiv’s goalkeeper in the first 20 minutes even though they had some good opportunities. The team relied on Morata as a forward, and Ronaldo often moved to the left-wing to receive the ball and either cross or attempt to cut inside and shoot.

And on the other side, Chiesa was the player who tried to cross as well, so Ronaldo would join Morata in the penalty area in that case since Juventus relied heavily on this type of chances, given the excellence of their players in aerial duels. And as you can see in the example below, on each cross Juventus had numbers inside the box and they tried to get the best out of these situations. 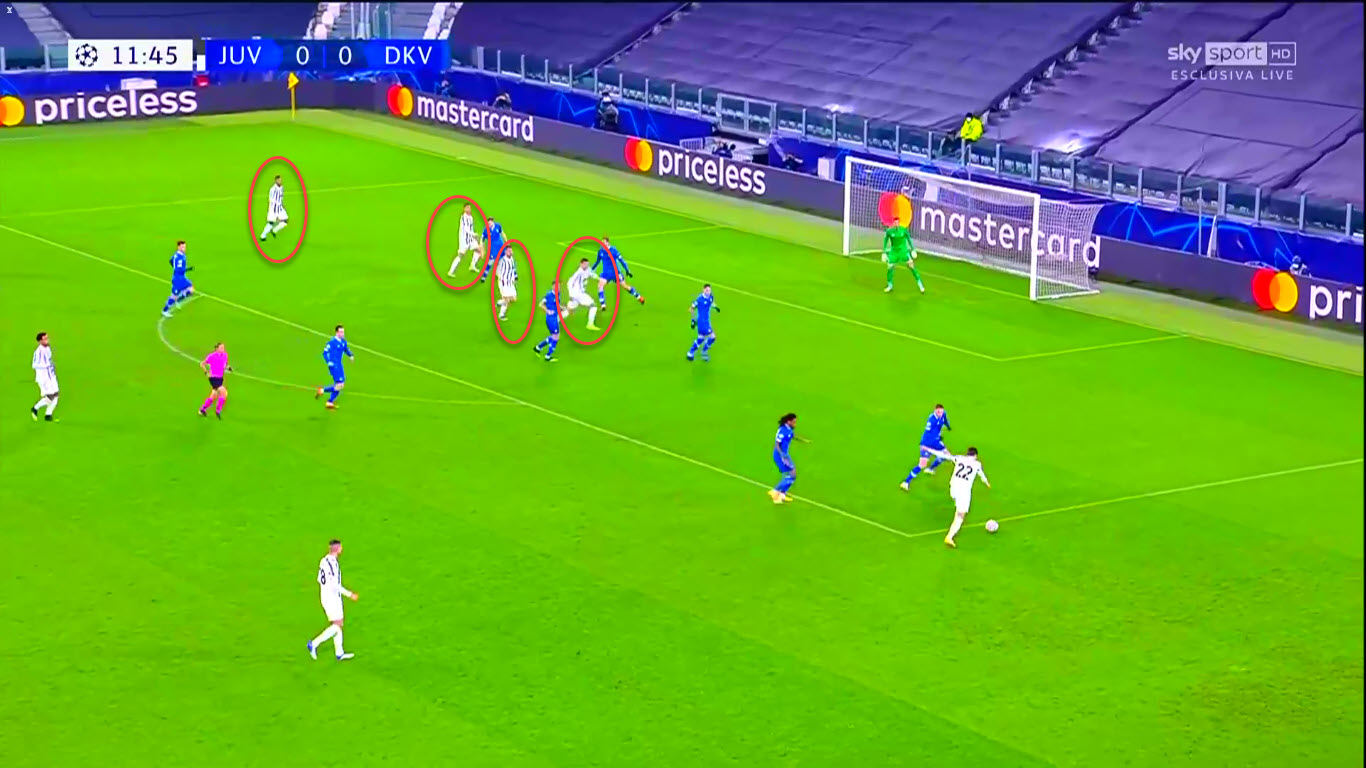 And that’s what led to Juventus’ first goal from Chiesa, who moved to the box to join Ronaldo when Morata moved backwards to get the ball during the goal action. And by filling the latter’s spot, Chiesa confused Dynamo Kyiv’s defenders, who did not mark him tightly and therefore he was able to score a beautiful goal with an accurate header.

And overall, Chiesa had a major role in this win through his pace, penetrations, exchanges with his teammates in the final third. Along with scoring a goal and contributing in the second and the third goals, which made his integration in the team finally become more complete. 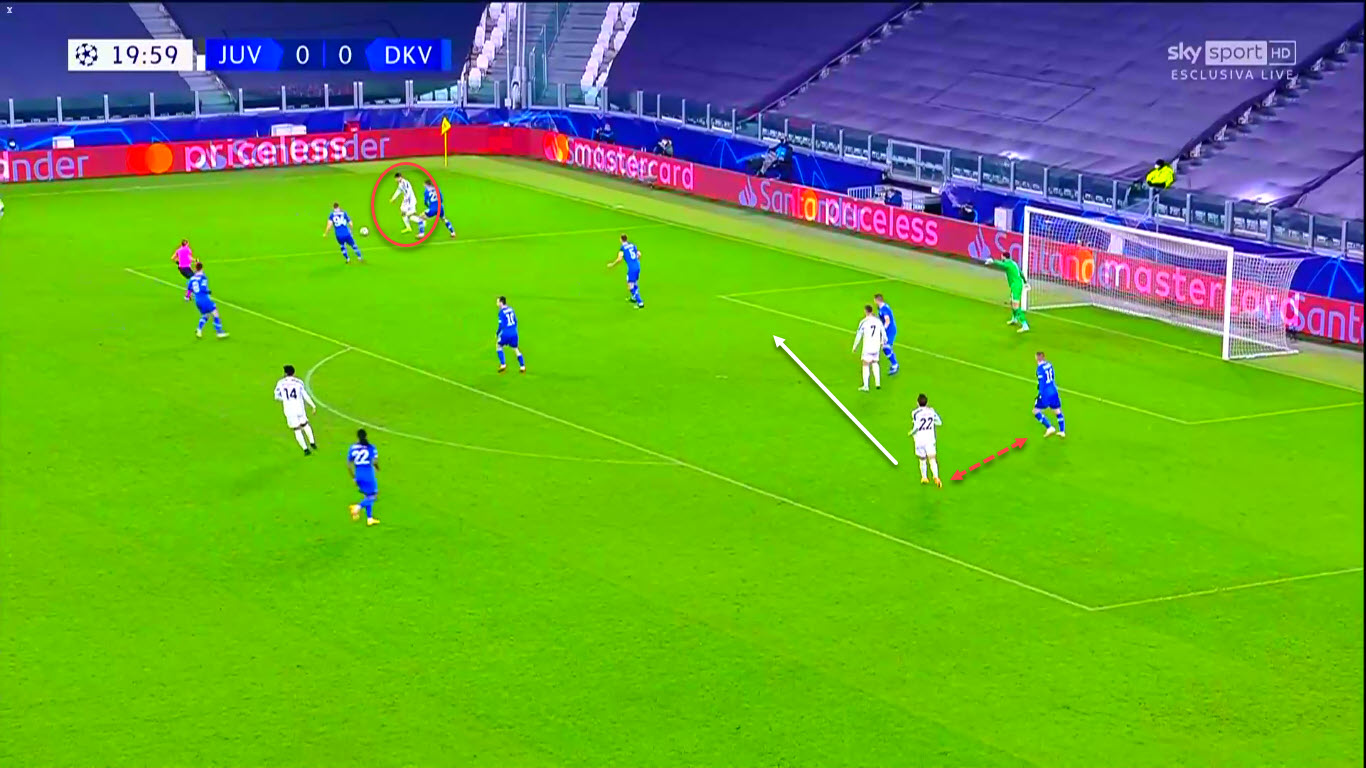 McKennie and Bentancour’s roles and importance

The American player has so far surprised the followers of Serie A positively with his quick integration and excellent performances with his team. He has a positive mentality and confidence that allowed him to play with great generosity in midfield and especially in linking between both lines of midfield and attack.

And in this regard, he is becoming indispensable in Pirlo’s tactics since he is not only doing well in his role as a midfielder, but he is also making extra efforts in pressing high with attackers and in advancing so often to help in the offensive phase.

Moreover, his physical strength does certainly help him in winning duels and eventually helping in winning the midfield battle. As you can see here, he often advances to create more pressure on the opponents’ defenders to narrow their passing options and this happens almost on every occasion. 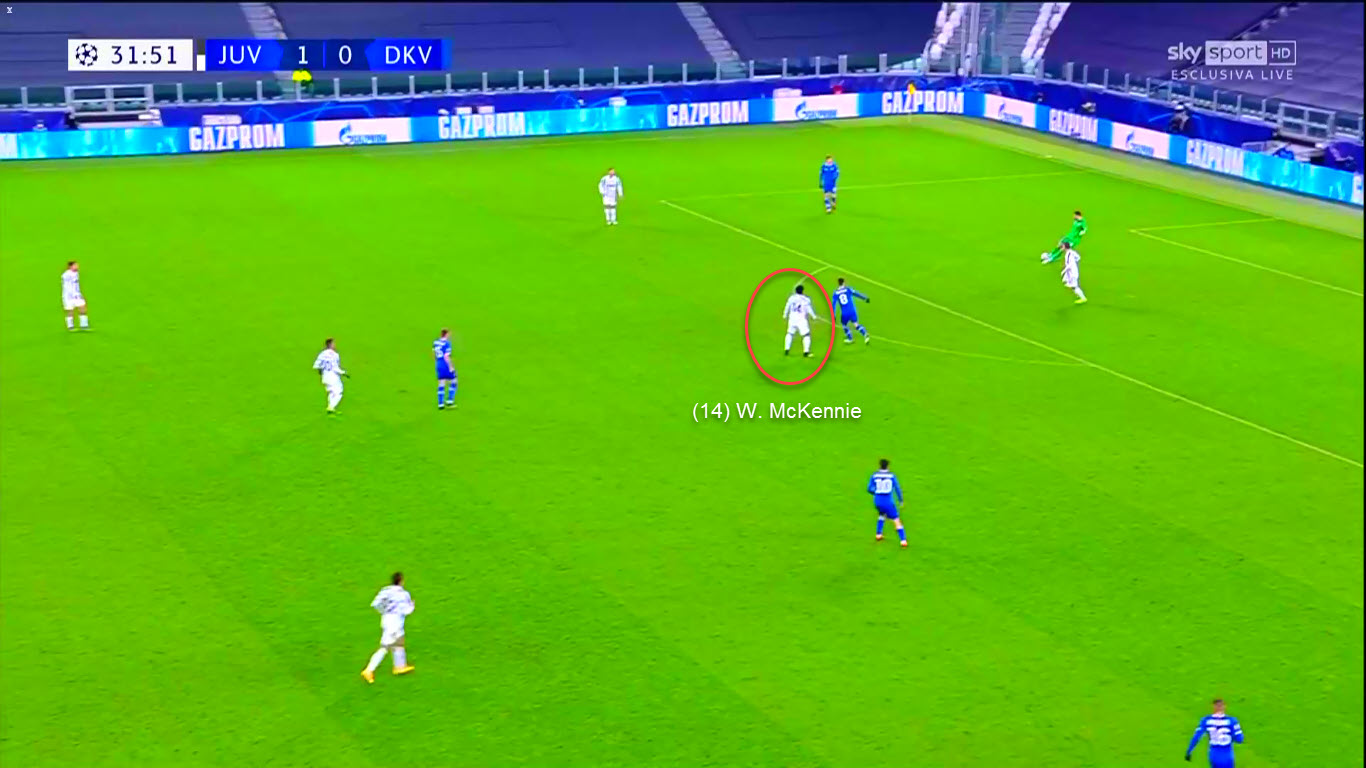 Pirlo, however, preferred to use Bentancur in a different way in order to create balance in midfield, and by this I mean that Bentancour has got less attacking and pressing duties and more defensive duties in respect to McKennie.

And that’s why we see the Uruguayan international more often just in front of the defence, acting like a defensive playmaker whose main duty is to intercept balls and distribute to his teammates. In this way, both Bentancur and McKennie are complementing each other and constituting a strong midfield duo which can develop even further if given the opportunity.

The champions of Italy were able to keep a clean sheet against Dynamo Kyiv despite their opponent’s several scoring chances. Overall, the team’s defensive performance was good not only because they did not concede goals but also since they won 62% of the defensive duels and 61,11% of the aerial duels while defending as a unit.

In other words, the team looked compact and everyone made some real defensive efforts, including Ramsey, Chiesa, Morata and Ronaldo.

You can see in this example how Chiesa returned to his team’s own third to close down the opponent and intercept a dangerous ball. This attitude and determination from all players to help especially when the team was being pressed and in danger was behind the solid Juventus’ performance and their win, even though there were some individual mistakes in marking. 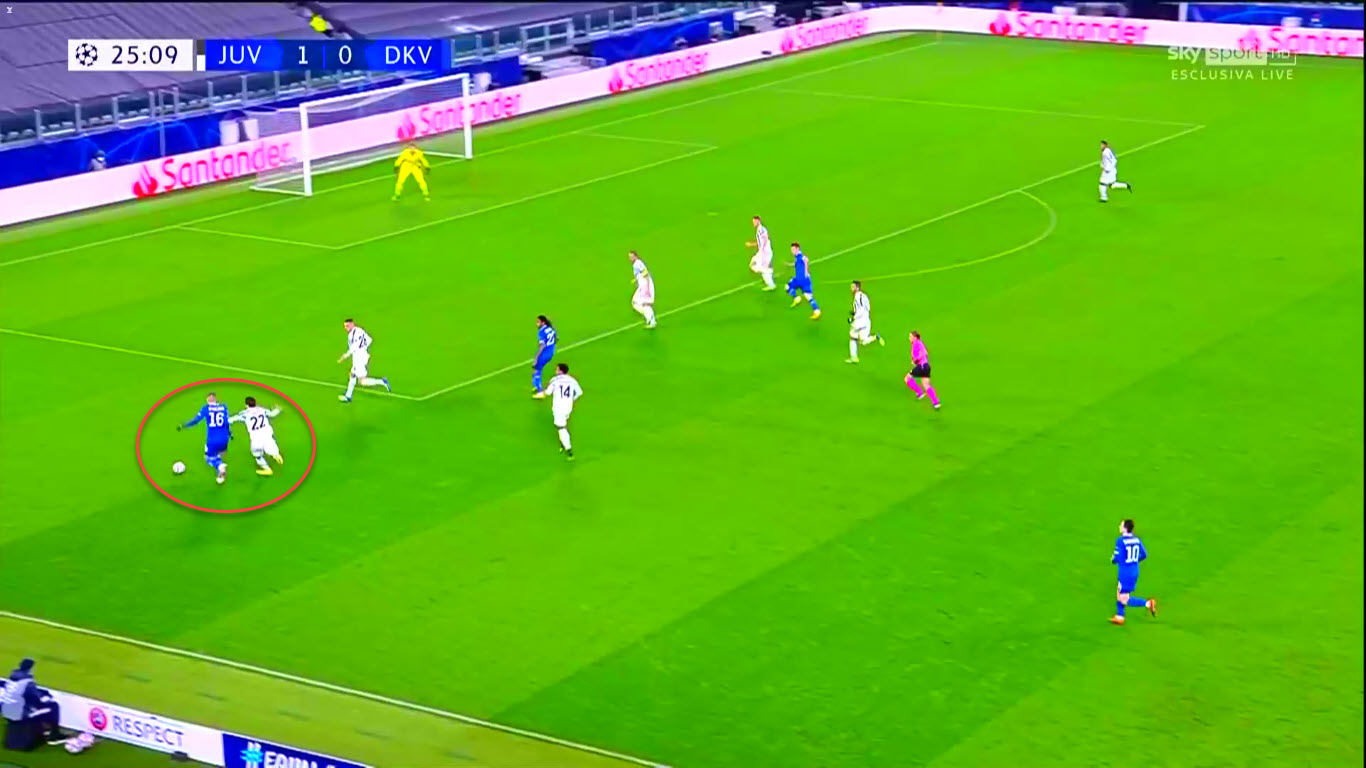 What also helped Juventus in reducing Dynamo Kyiv’s threat was the two lines of defence which were conserved throughout the match. These lines were the line of midfield; composed of Chiesa, McKennie, Bentancour and Ramsey and the line of defence: Demiral, Bonucci, De Ligt and Sandro. In fact, these two lines were usually close to each other when the opponent had the ball and started to get closer to the final third.

And by that, as soon as Dynamo Kyiv players get past the first line of defence, they find the second line players ready to intervene while having the advantage of reading the action beforehand too. As you can notice here, these two lines got closer as soon as Dynamo Kyiv’s player received the ball in Juventus’ third, and the distance between those two lines will even get closer during the rest of the action. 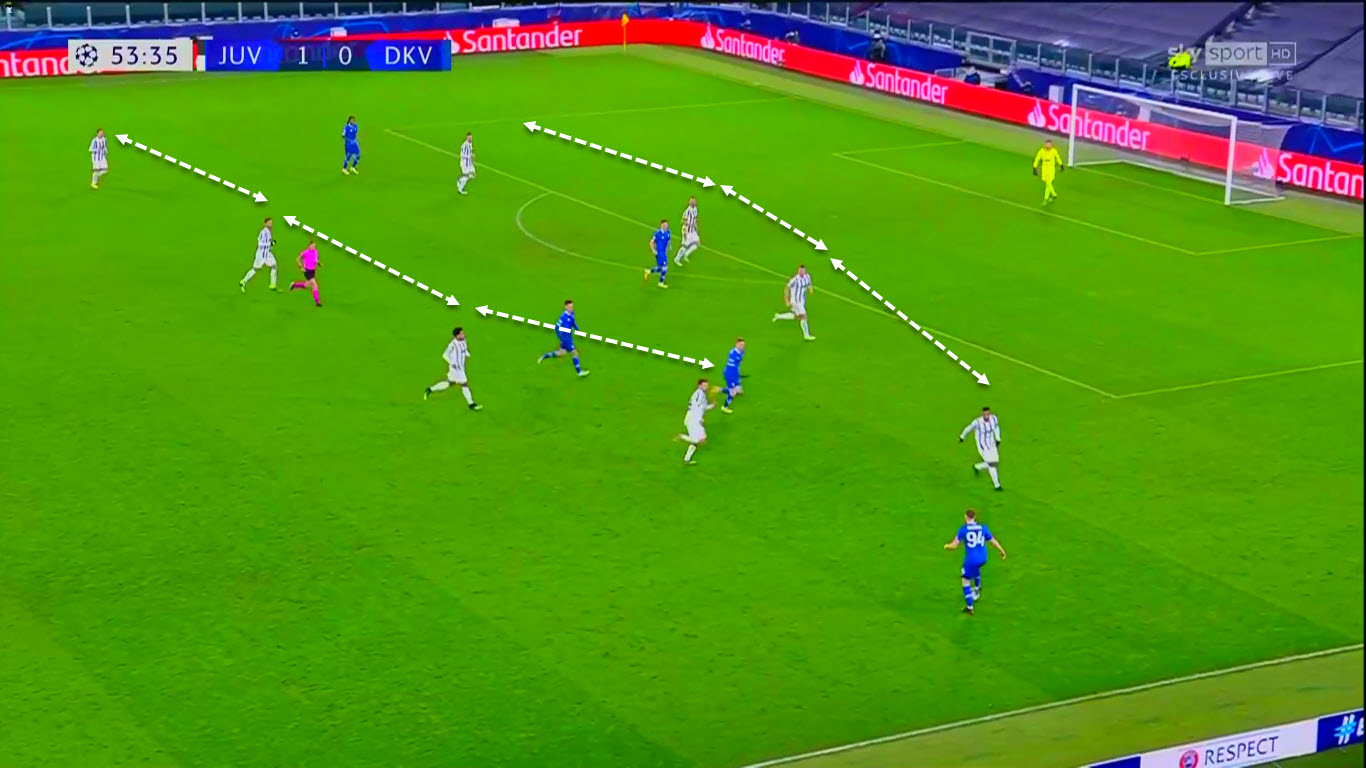 Dynamo Kyiv started this game in a good and competitive way and had possession of the ball quite often, however they found difficulties in reaching and overcoming Juventus’ defence. They only had six shots, and only three of them were on target, which explains how the team had attacking issues.

This happened not only because of Juventus’ prowess but also due to Dynamo Kyiv’s lack of confidence and determination at crucial times. The team had some opportunities that could have changed the course of the match if scored but missing those chances made the job more difficult for Dynamo Kyiv.

You can see for instance how Tsyhankov missed a clear goalscoring chance after being in a one vs one situation with Szczęsny and could have hit the ball in a different way. These small details made the match more difficult for Dynamo Kyiv and gave Juventus more determination to win. 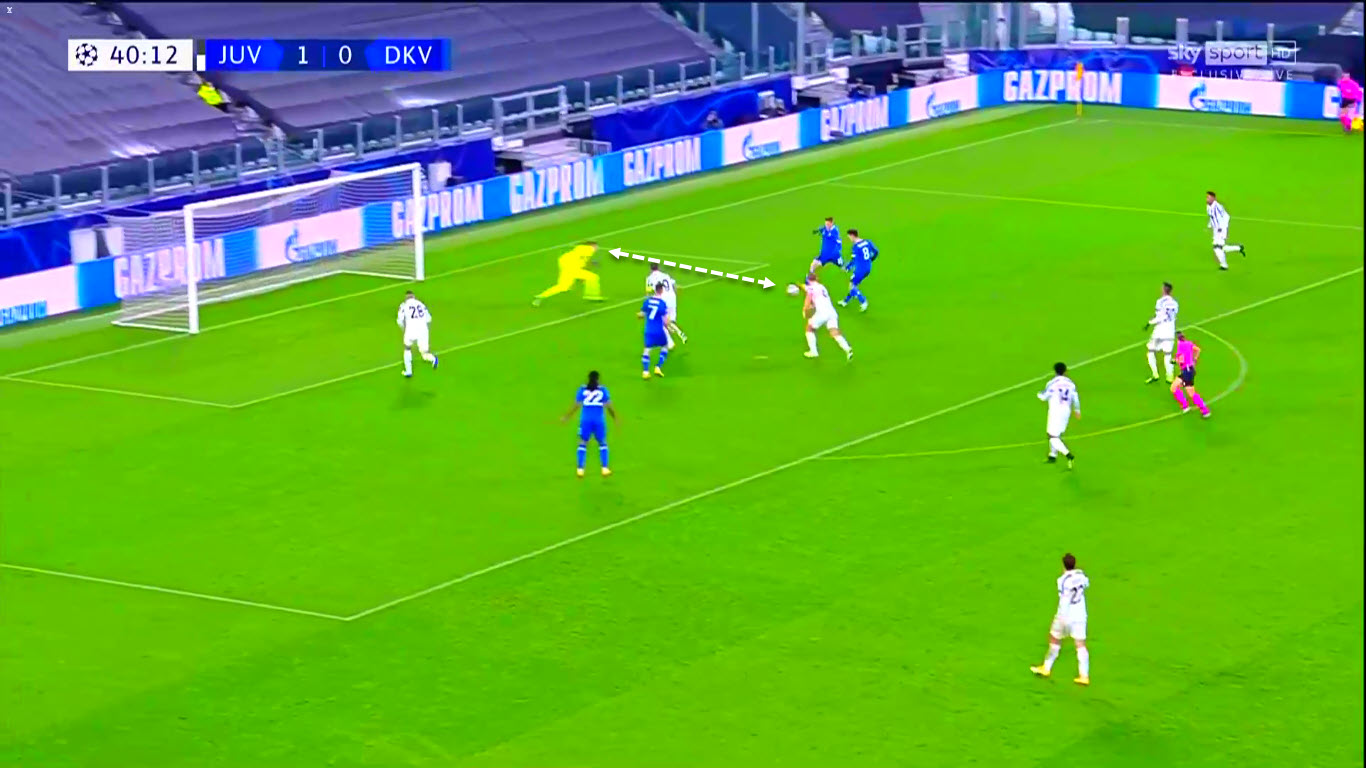 Also, being behind on the scoreboard and worrying about defending and not conceding other goals affected the team’s attacking performance, since Benjamin Verbič, Gerson Rodrigues and Viktor Tsyhankov did not receive enough support from their teammates to create numerical superiority and have more options up front.

Juventus got the three required points that allowed them to keep their battle with Barcelona for the top spot alive, and a 3-0 win will surely make the team progress in the next matches in terms of confidence and chemistry. Yet, the team is still lacking efficiency and continuity in results and in performances as they are not winning regularly and are sometimes having bad results against less powerful teams.

For Dynamo Kyiv however, this loss could have been avoided or at least it could have been 2-1 or 1-0 since the team has got the quality of players needed to do better against this Juventus side. But for now, concentrating on their league fixtures and on qualifying to the Europa League knockout phase should be the team’s main goals.