The last match of Serie A’s fifth week finished with an entertaining 3-3 draw between the first in the league, Milan, and Roma. it was a beautiful game to watch especially for neutral football fans since everything was there during the 90 minutes; goals, chances, cards, referee mistakes, tension and late drama.

And therefore, in this tactical analysis we will carry out an analysis of what happened in this game and explore both teams’ tactics, plans and most influential players as well as explaining what prevented Milan and Roma from getting the precious three points that can serve them later on in the battle for UEFA Champions League qualifying spots.

Stefano Pioli chose to start this game with his typical 4-2-3-1 which was very useful for the team since the after-lockdown period. Ciprian Tătărușanu was the goalkeeper since Gianluigi Donnarumma was infected with covid-19, and Simon Kjær constituted the defending duo along with Alessio Romagnoli, while on the right flank Davide Calabria was favoured over Andrea Conti and Theo Hernández played as a left-back.

The midfield was made up of Franck Kessié and Ismaël Bennacer as central midfielders who help in defence and contribute to the attacking phase as well. And ahead of them, Hakan Çalhanoğlu played as an advanced playmaker behind Zlatan Ibrahimović while both Rafael Leão and Alexis Saelemaekers played as wingers.

For Roma, Paulo Fonseca started with his 3-4-2-1 formation which proved successful with the team during the end of last season and in the beginning of the new one. Antonio Mirante was the goalkeeper while Marash Kumbulla, Roger Ibañez, and Gianluca Mancini played as centre-backs.

In midfield, Rick Karsdorp was used as a right-winger, Lorenzo Pellegrini and Jordan Veretout as central midfielders, and Leonardo Spinazzola as a left-back. In front of them, Pedro and Henrikh Mkhitaryan were both playing as attacking midfielders just behind the team’s forward, Edin Džeko. 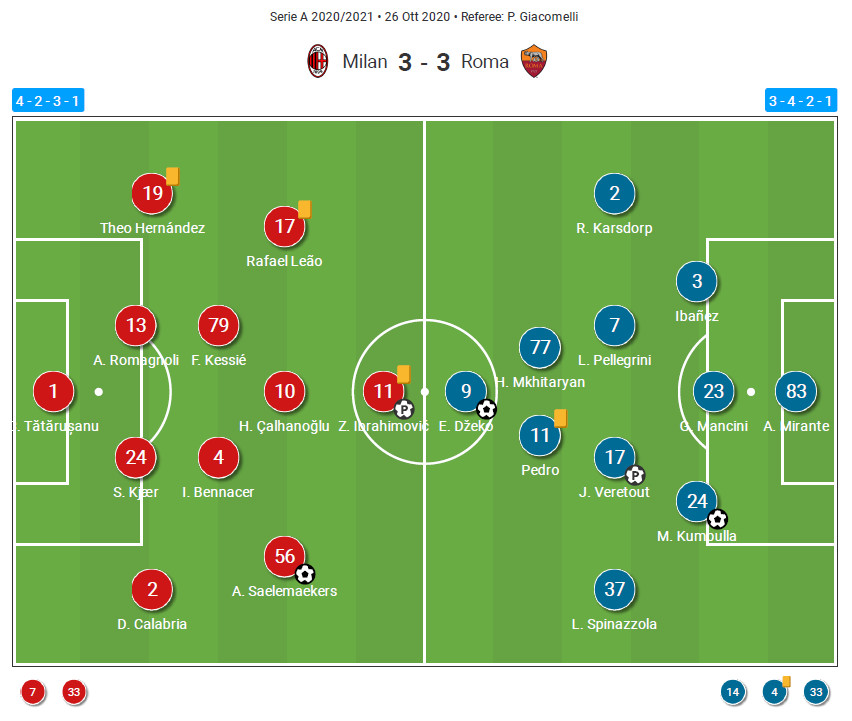 Milan’s excellent start of the match

Watching this game was like riding a roller coaster for many of these two teams’ fans because it was full of events and tension. Milan started the game in a perfect manner by scoring a goal that surprised Roma’s defence. It was almost an identical goal to the one scored in the Milan-Inter derby.

It all started with Çalhanoğlu’s horizontal pass to Leão which gave him space to dribble and cut inside. In the meanwhile, Saelemaekers positioned himself very well to receive the ball in the centre as you can see in this picture and this confused Roma’s defenders who went to mark him but no one stayed backwards to cover. Therefore, Leão intelligently crossed an accurate ball in the back of defence to Ibrahimović who was faster than his direct marker and scored it. 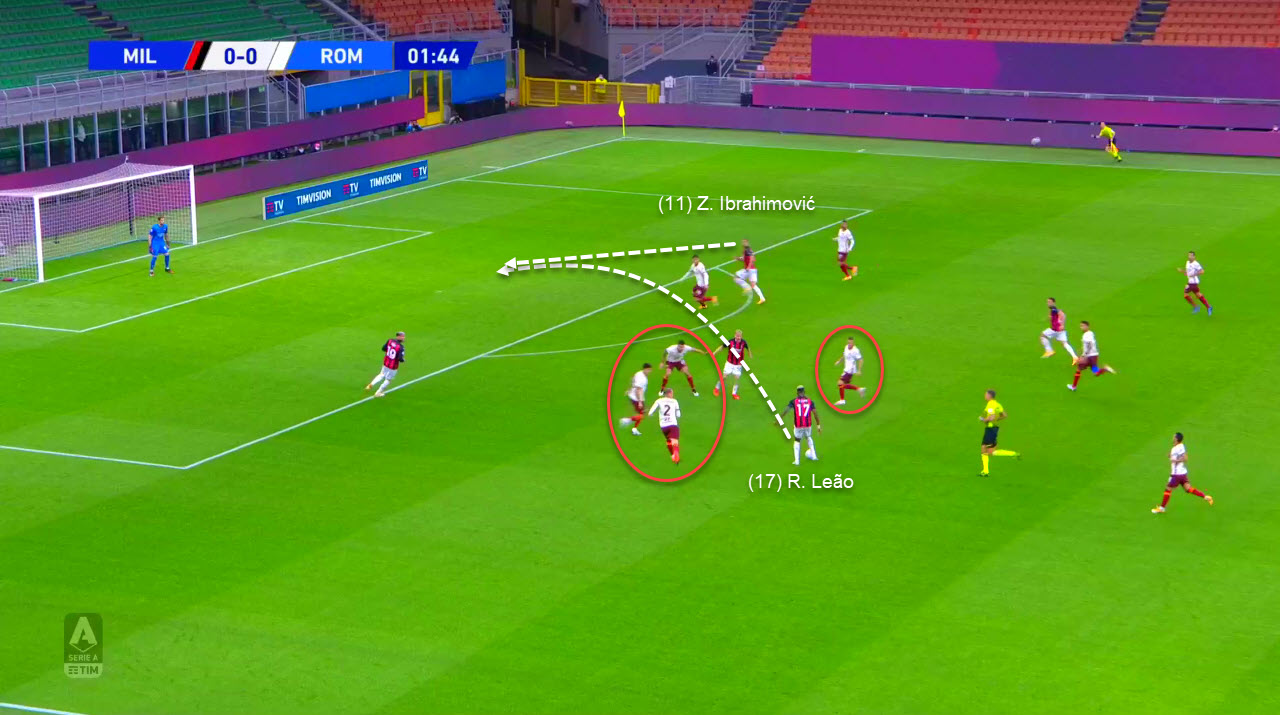 Following this goal, Roma tried to advance and reach Milan’s penalty area but this was not simple for them since they were faced by a high Milan press with Ibrahimović, Saelemaekers, Leão and Çalhanoğlu always disturbing those who had the ball. And in the back, Milan had two lines of defence one was formed by Kessié and Bennacer and the other was made up of the four defenders. 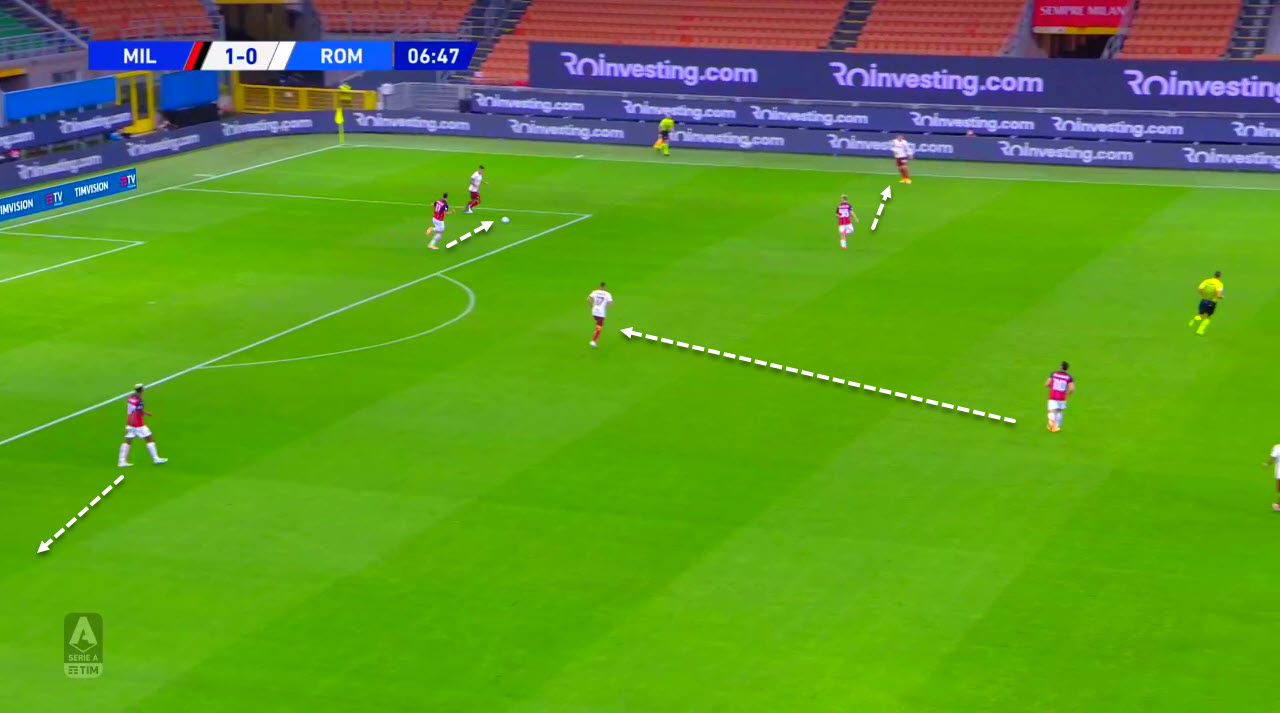 And in this regard, Kessié and Bennacer were efficient in preventing Roma from penetrating to the box and they even created more troubles for Roma in the build-up by going higher and marking their midfielders, just like you can see in the following picture. And if Roma’s succeeds in reaching Milan’s half, both Bennacer and Kessié return quickly to cover and to regain their defensive line. 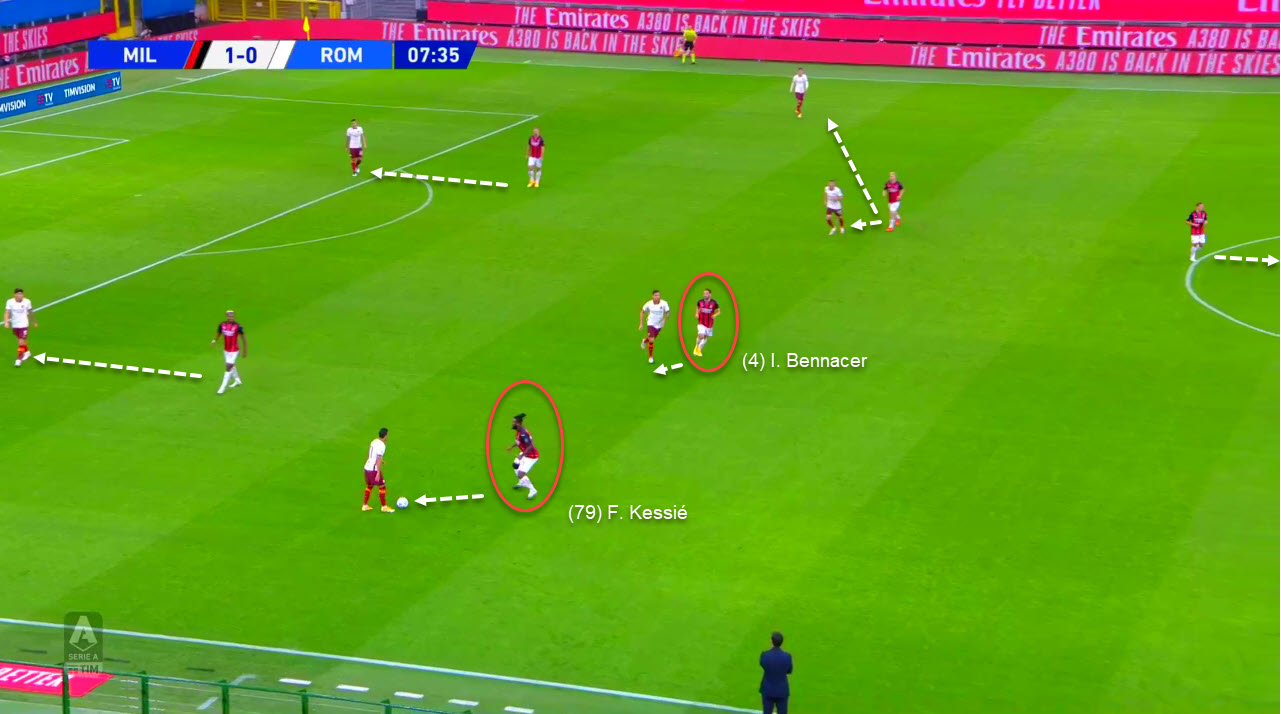 Roma relied on both Mkhitaryan and Pedro to create the difference in the final third, and in this match we saw Spinazzola joining the attack quite often too to create numerical superiority on the left-wing. Moreover, Pellegrini and Veretout did also participate in attack and this helped Roma play with more determination and more numbers in attack.

More importantly, Džeko’s movements with and without the ball created problems for Milan and helped Roma win in various defensive duels and difficult situations just like in this one shown below. Džeko switched his position and went to the left to confuse Milan’s defenders and when Mkhitaryan saw him and gave him a through pass, Milan’s defenders did not expect the pass and Džeko was left alone with only Bennacer chasing him but he failed to steal the ball from the Bosnian forward. 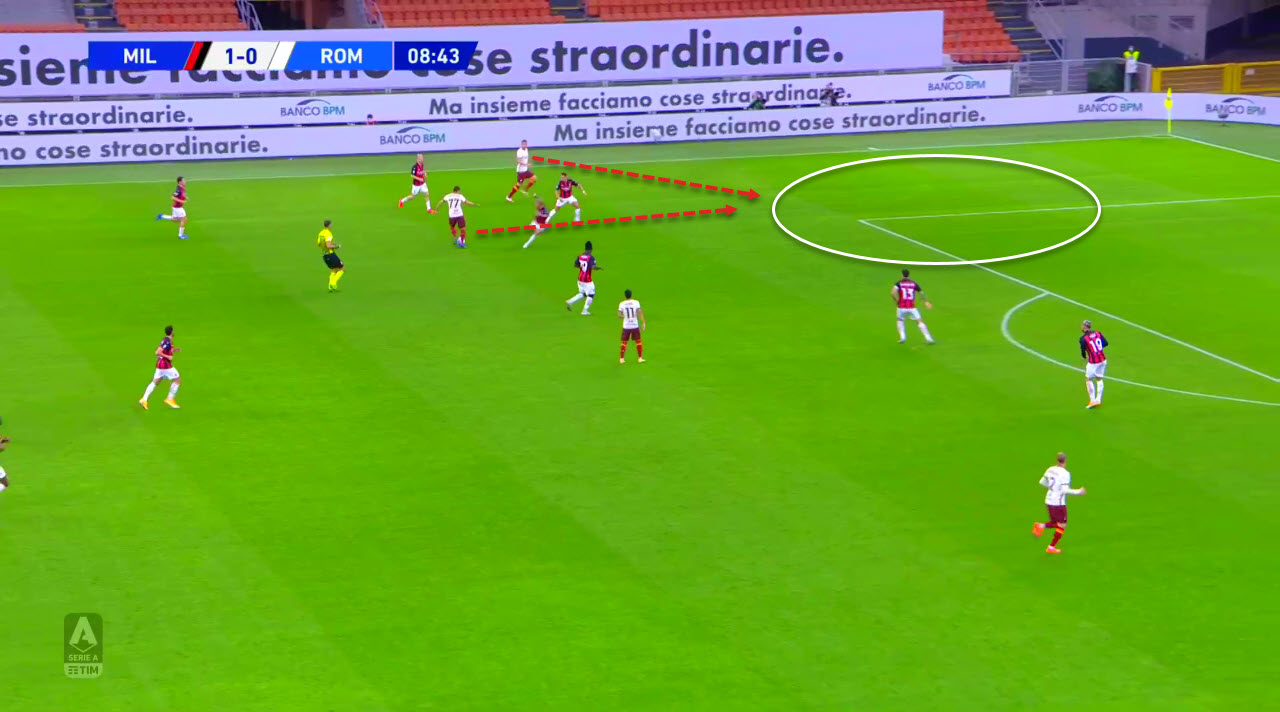 After Roma’s equalising goal from Džeko following a timing mistake of Tătărușanu, the game started to become more balanced. With Roma starting to make more attacks in response to Milan’s scoring attempts. What was striking in Roma’s attacks was the flexibility with which movements and passes to the box were made. 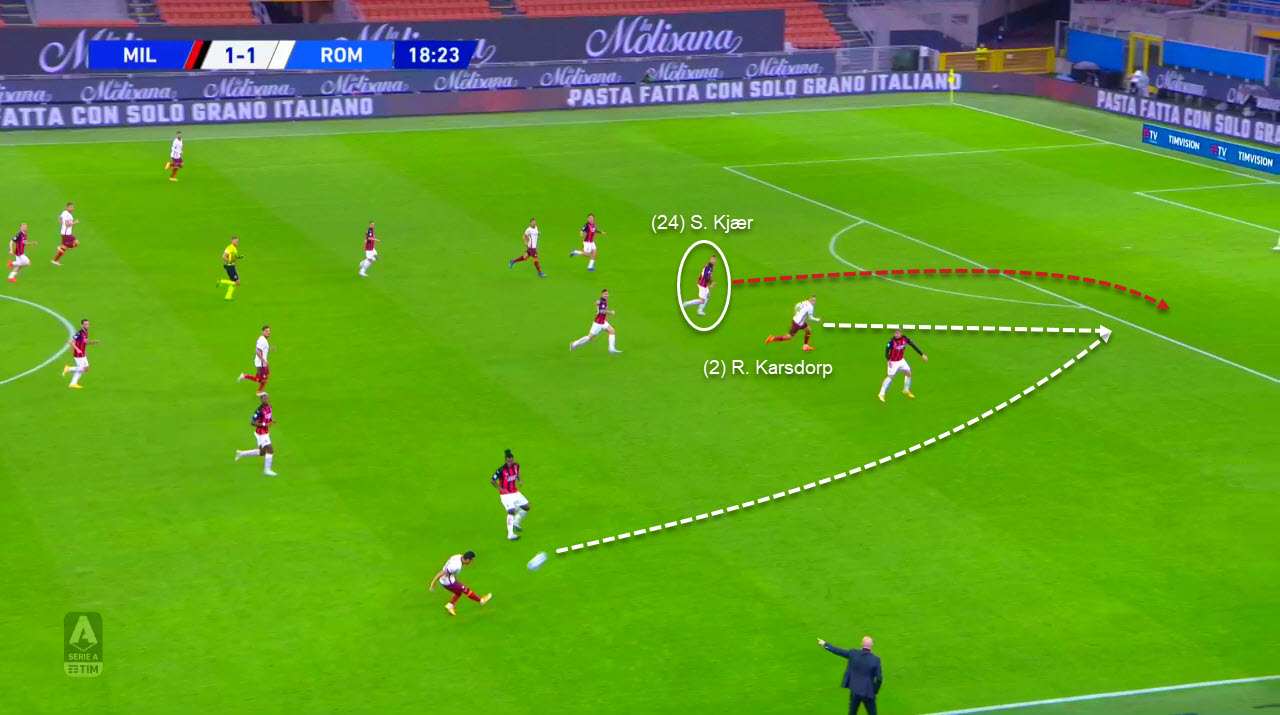 The first-half ended with a 1-1 draw before Kjær hit the post and Milan created more concrete opportunities than Roma even though the latter had a few shots on target too. And the beginning of the second-half was almost identical to the first, since Leão once again shined with a solo effort on the left-wing after getting rid of marking and running past two other Roma defenders before giving an assist in the space for Saelemaekers who was once again positioned in a very dangerous position.

And since Roma’s defence were not attentive to Saelemaekers’s movements off the ball especially between their lines of defence and midfield, he was able to score the second Milan goal with an excellent shot. But just like for the first goal, the credit also goes to Leão. 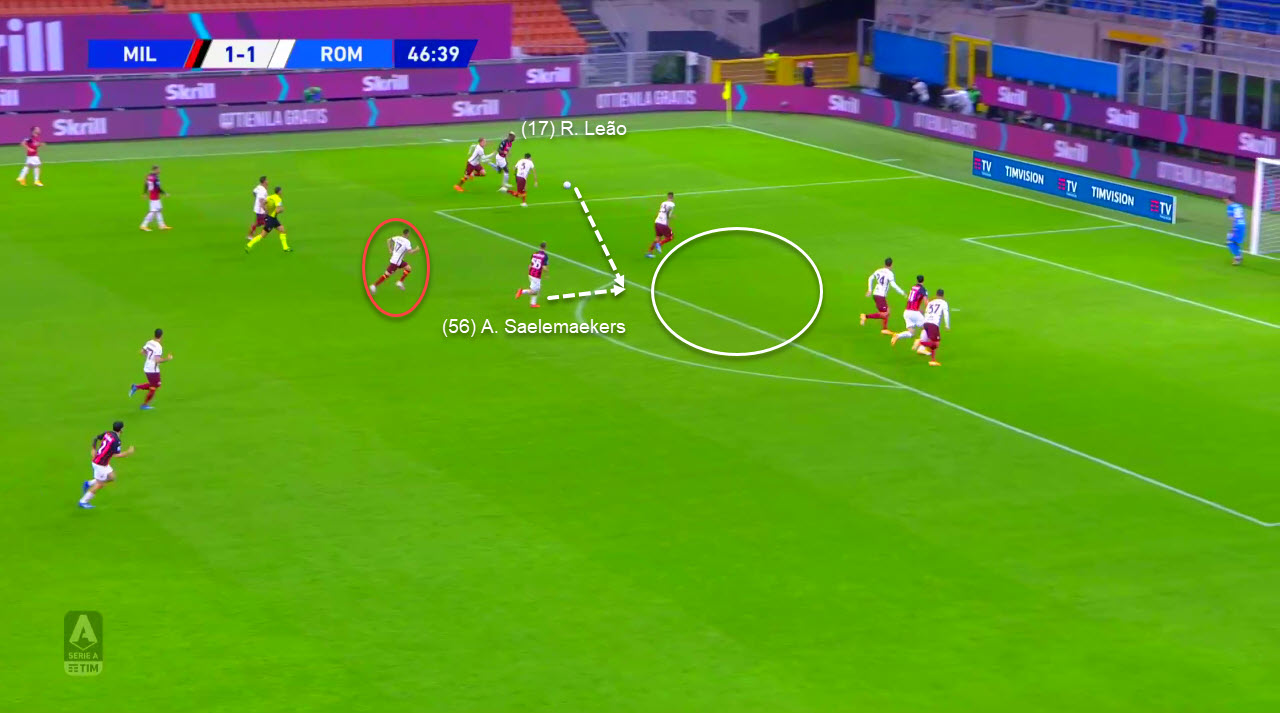 Roma started to find more difficulties after this goal especially when building from the back. And sinceMilan were aiming at scoring a third goal and their defensive block was often high, Roma relied on quick counter-attacks to surprise Milan’s defence and score and they were able to pass their defence a few times but failed to score.

In this example for instance, Pellegrini was running with the ball in a counter-attack and gave a through ball to Mkhitaryan in the back of defenders while Džeko followed the action from the right-wing and received the pass but did not shoot on target. And in matches like these, it is fundamental to score these kinds of chances to win especially when you break down the defence. 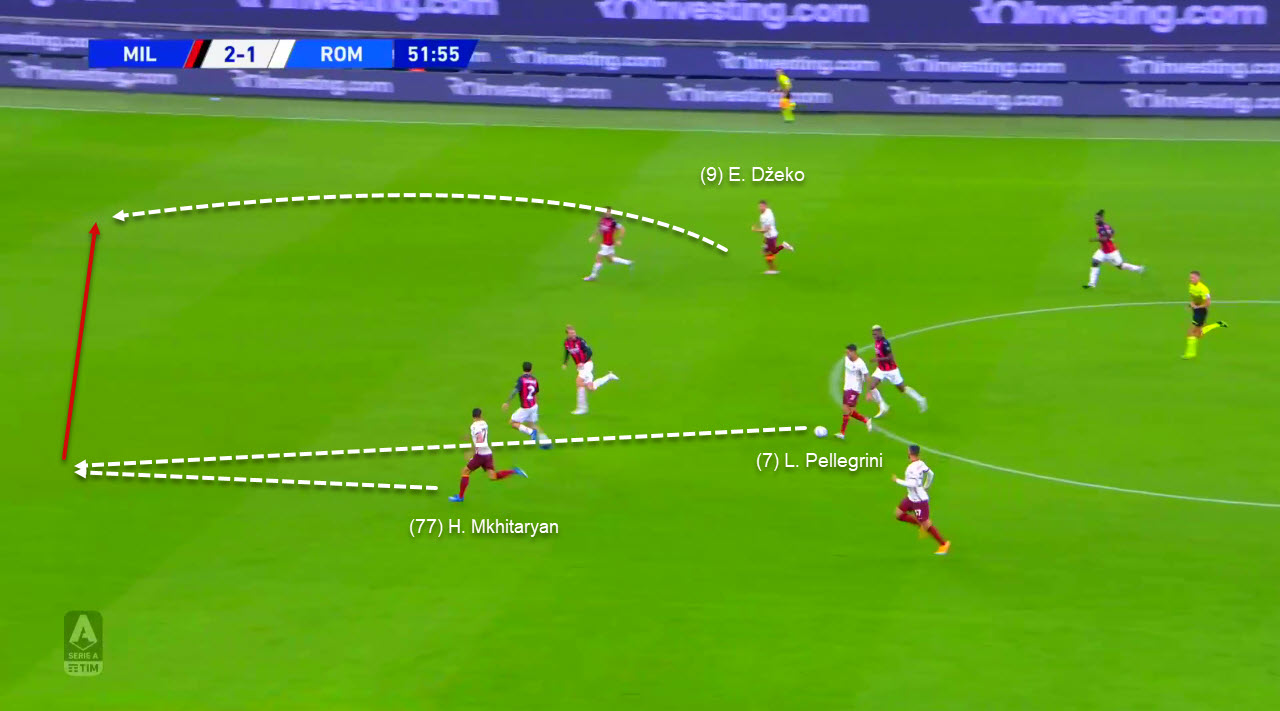 Following that, the match became a sort of continuous attack vs defence situations from both sides, and most of them were counter-attacks. Milan for instance had a clear counter-attacking opportunity that was led by Çalhanoğlu but missed it due to the latter’s wrong pass execution and timing.

His mistake was passing the ball too late to Leão who accelerated and waited for the ball and his marker already realised Çalhanoğlu’s intention. If this was executed properly at the right time, it would have been a very important chance for Milan. 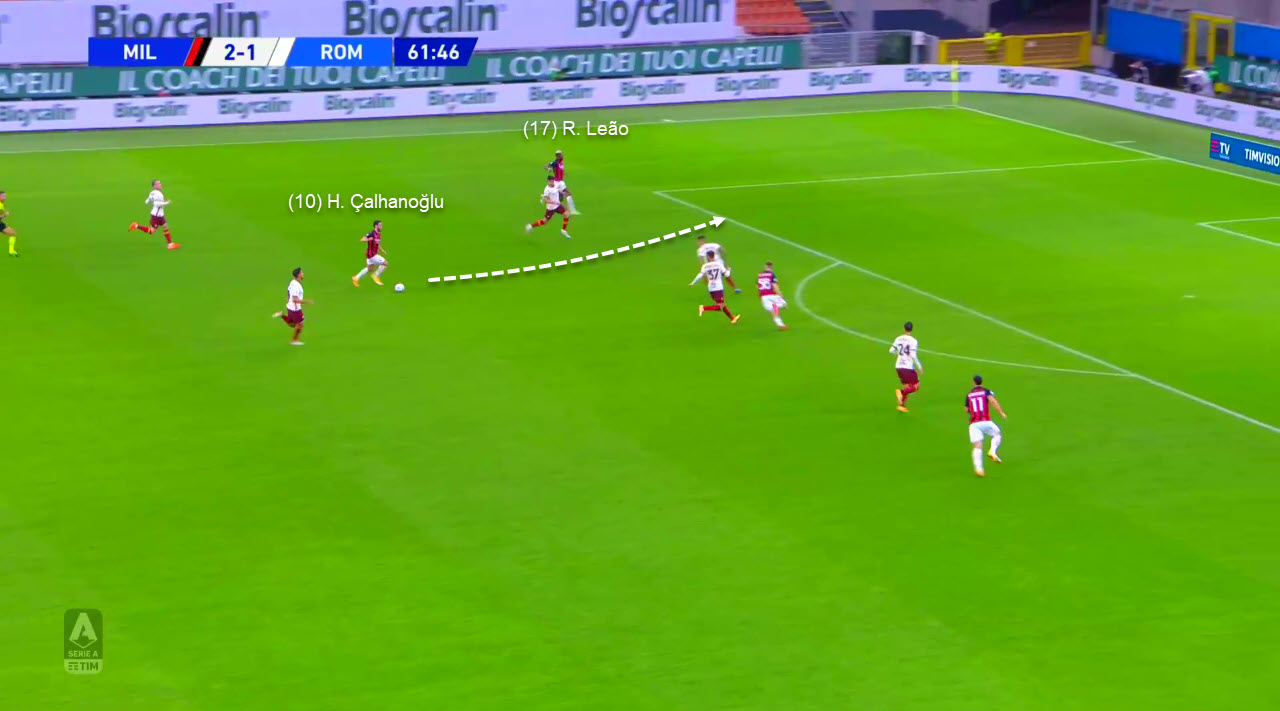 The referee then gave Roma and then Milan two non-existent penalties that were both scored and changed the course of the game. And due to tension, both teams became more aggressive and concentration decreased. Nevertheless, Milan showed that they really wanted the win more than Roma especially in the last minutes of the game by playing the attack and trying to steal a precious goal but Kumbulla, Ibañez, and Mancini played a big role in getting the draw for Roma and in staying focused during the last minutes.

And it is worth saying that Fonseca used Ibañez on the right because he was faster than Mancini and more suited to marking Leão even though the latter looked unstoppable during this game. And overall, Roma showed that they are a difficult team to beat this season and that they can compete for the first four spots, as opposed to last season.

Overall, Roma showed that they are a difficult team to beat this season and that they can compete for the first four spots, as opposed to last season. However, Milan were better in many aspects and deserved the win a bit more than Roma. And that’s because they created more opportunities, they had more ball possession (54% for Milan and 46% for Roma), and won more duels (50% for Milan and 44% for Roma). Roma, however, were better in pass accuracy since they had 89% average accurate passes while Milan had 86% and Roma were also better in pressing intensity and especially in exploiting set-pieces.

Milan had two scoring chances from set-pieces and were not able to score them because one hit the post following Kjær’s header and the other was Kessié’s header which was saved by Mirante. Yet, both teams proved that they are not willing to give away points easily this season.