The 2020/21 English Premier League is full of surprise, with teams like Everton and Aston Villa occupying the top four. Tottenham Hotspur now rank sixth in the table and they are striking for the top three. Burnley don’t play well this season as they are now in the relegation zone. 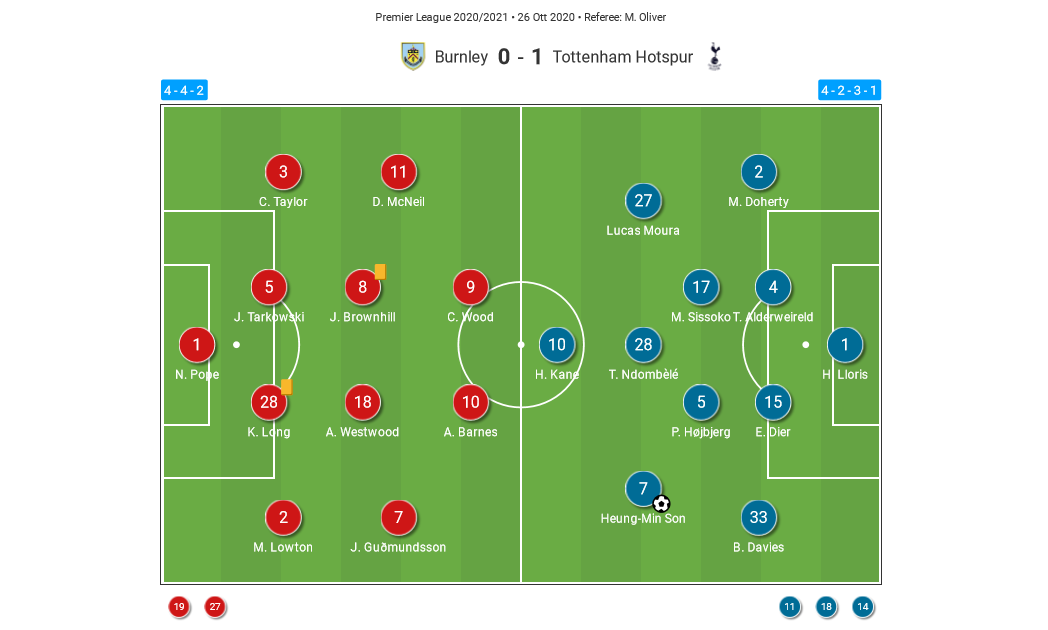 In this match, both sides created some chances with different methods (xG: Burnley 0.85, Hotspur 0.97). For Tottenham Hotspur’s side, they wanted to exploit the individuality of front players with the likes of pacey Son and Moura against Burnley’s not so pacey central defenders Long and Tarkowski. Hence, to achieve this, they played out from the back with a 1-3-4-3 shape, the pivot Højbjerg dropping to form a three-back. They did so to create numeral superiority in the first line against the 4-2 pressing shape of Burnley. Also, the three-back would exchange lateral passes to entice the opponent to step higher; therefore, the space behind the defensive line would be larger for runners like Son to run onto and outpaced the defenders.

With three in the back, there would always be a free player to receive. As the opponents (two in the first pressing line, along with the whole block) stepped higher to press, the ball would be delivered to the free player (usually Alderweireld, his long pass was decent) in the back. As this free player had space and time to look up and made eye contact with front players, this was the trigger for pacey players to attack the space behind the defensive line. Then the free man would release the long pass to find the runners.

Above is a manifestation of this tactic. On this occasion, Burnley’s front-duo pressed high against Hotspur’s back-three and this activated the ball played to the free man Alderweireld. Then Alderweireld had space and time to look up and made eye contact with Son and Moura. Son and Moura then accelerated to run into space behind the defensive line. The pass fell onto space and forced the goalkeeper to exit and clear the ball.

Theoretically speaking this pattern should exert great threats to Burnley, and indeed it had created some chances in the box for Kane and Son to finish. Nevertheless, the requirement for the weight of these long balls is high as the weight of the ball should be suitable enough for the receiver to take the first touch into the scoring position. Otherwise, even if the ball fell into the right place the attacker found it hard to handle the ball into a scoring position. This was not the most effective approach.
Therefore, other methods emerged to atone for the effectiveness in attack. When they built out from the back, they tried to instigate pressing from the opponent, especially to move the side-midfielders to press the back-three. Therefore, space for the side-back to progress the ball will be created. Likewise, if the central midfielder of Burnley stepped to press the back-three, space for midfielder Sissoko to receive then turn would appear. Nevertheless, this might be suboptimal as Sissoko’s ability to dictate the play is not that top and he might lose possession recklessly sometimes.

As you can see from the above image, Burnley’s right-winger Guðmundsson left the midfield line and pressed one of the back-three. However, his run didn’t shadow the passing option of Davies and he was easily picked in this scenario. The pressing block was then broken and the play was ready to be forwards.

However, using flanks to progress the play has its natural defect as the angle of play is limited. Consequently, Kane would drop to help maintain the dynamics in the central play. Also, Ndombèlé dropped to provide support in the midfield, serving as the second central midfielder in the 1-3-4-3, whereas this deployment didn’t maximize his strength. He is more capable of giving the killer passes between lines and creates chances for runners like Son, instead of dictating the play in front of the midfield line. Therefore, Erik Lamela was substituted and his primary function was to free Ndombèlé to play more creative between lines. Lamela positioned in front of the opponent’s midfield line and helped control the centre, where Ndombèlé could position himself between lines to focus on giving final passes instead of dropping.

From the above example, we could see that Lamela positioned in front of the opposition midfield line. This freed Ndombèlé from dropping and he could concentrate on giving killer passes between lines. In the image, he did position himself between lines. As the two central midfielder, Lamela and Sissoko pinned the opposition’s midfielders, Ndombèlé had the space to receive in that space. Then Ndombèlé received the ball and turned, giving the final pass and created a decent chance for Son. Later in the match the same pattern occurred many times and Hotspurs dominated the game. Finally they scored through a corner.

Though Tottenham Hotspur eventually won the game, Burnley created some decent chances in the game as well. Those chances were all related to their direct play, and their philosophy of play was quite simple in this match: to maximize the height of two strikers Barnes (186cm) and Wood (191cm). Thus, firstly they would try to play long to find these two strikers, who tried their best to be the first to access the ball, and there would be some coordinated movement between these two strikers. Secondly, other midfield players, usually two or three near the ball-side, would stay compact with the two strikers to combat for the second ball, regardless of whether two strikers were the first on the ball.

As you can see from the above image, the goal kick was aimed at the two target men in front. While Barnes dropped to try to be the first to access the ball, Wood made a contrast movement to stretch the defensive line up front. This helped maintained the height of the play as well as providing an option for direct finishing. On top of this, three midfield players kept compact with the front two, aiming to win the second ball around the ball area. On this occasion, though Barnes didn’t win the first ball, but his teammate Guðmundsson managed to pick up the second ball and launched the attack in front.

This direct play approach was quite effective, though not supported by their aerial duels stats (Barnes-25%; Wood- 33%). However, Barnes and Wood could both shield the ball and controlled the ball with their strong physique whilst the players in the back aimed to feed the ball for Barnes and Wood to control the ball with first access. Also, if the nearest second ball player couldn’t get the ball they could also counter-press Hotspurs players immediately, trying to win back the ball.
After bringing down the ball with two strikers chest/ feet, they would feed the ball to the midfielders, who would then play the ball to the flank. Thus, this was an up (long)-back-up (flank) combination of Burnley.

As the flank players got the ball, they would hit a cross early if possible to find the two target men in the box, aiming to take advantage of their height to finish. To better maximize their strength, two central midfielders would cluster to the ball-side, pinning the two pivots of Hotspurs away from helping the defensive line. This is the concept of isolating the defensive line with pinning the midfield line high/ to the side.

Above is an example of their chance creation. Right-back Lowton got the ball on the right flank. Guðmundsson and McNeil pinned Hotspur’s pivots Sissoko and Højbjerg to their right flank as well. The defensive line was left unprotected by the midfield line. Then Lowton crossed early in that position to find two strikers who were running in behind the defensive line and caught the defensive line in surprise. Then Wood was the first to access the ball and finished a shot in the box, though it was offside.

Other issues worth mentioning

In this match, both sides manifested an offensive approach. The loss of their possession was not forced by the opponent, whereas it was the opportunity cost of their style of play. For example, the direct method of Burnley would inevitably make them lose some possessions, and the same logic applies to finding the runners like Son of Hotspurs. Thus, we are not going to talk about their whole defensive play in this analysis.
Nevertheless, there is a point that we want to point out. That’s the potential weakness of Tottenham Hotspurs for other teams to exploit. Once the play is stretched from mid/high-block to the low-block by the opponents, Hotspur’s midfielders aren’t chasing as quickly as they can. They could not offer enough help to the defensive line.

The above image is an example of this. As we’ve mentioned in the above section, Burnley played long to find the target men in front where they would have coordinated movement. In this scenario, Wood successfully got to be the first on the ball, and Barnes stayed behind to receive the second ball to shoot from outside the box. We could see from the image that Sissoko and other midfield players were slow in chasing and helping. They left Barnes to shoot in zone 14 without intervention. This is a weakness for other teams to exploit.

The substitution of Lamela was the determinant of this match. It’s worth seeing once Ndombèlé is freed, what he could bring to Tottenham Hotspur in the future.