Following the game between Lille and PSG, Lyon are level on points with Lille at the top of Ligue 1. Lyon have now won 4 of their last 5 games in the league. If they keep this up, they will surely secure a UEFA Champions League spot for next year.

On the other hand, Nice are in thirteenth place which is quite worrying, seeing as how last year they qualified for Europa League. In the league, they have lost two and won one game in their last three but the saddest moment of the season happened in the Europa League. Here, they ended last in their group, which was not expected as they supposedly have a better quality team than some of their opponents. Nice really need to pick their game up or their season could be disastrous.

The game ended in a 1-4 win to Lyon, with Nice trying to play out well from behind and Lyon specialising in making destructive counter-attacks.

Nice started in a 3-4-3, with Alexis Claude Maurice, Amine Gouiri, and Rony Lopes leading the attack. The midfielders were Khéphren Thuram and Hicham Boudaoui while the wing-backs were Jordan Lotomba and Hassane Kamara. Then, the three centre-backs were Stanley Nsoki, Robson Bambu, and Flavius Daniliuc.

Lyon played in a 4-3-3. The back four were Maxwel Cornet, Jason Denayer, Marcelo, and Léo Dubois. The three midfielders were Houssem Aouar, Bruno Guimarães, and Lucas Paquetá. Lastly, the wingers were Karl Toko Ekambi and Tino Kadewere, with Memphis Depay as a striker. 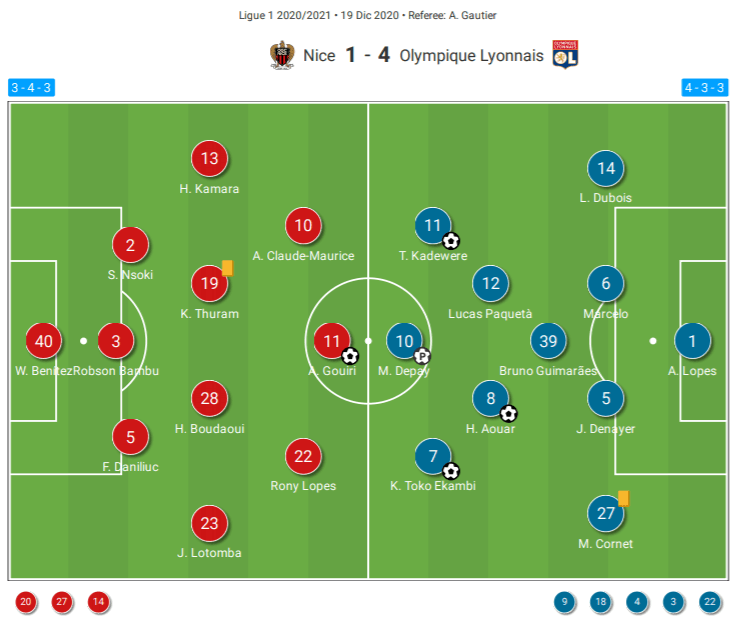 If used well, the 3-4-3 formation can be perfect to play the ball out well. This is because you will usually have superiority in the initial stage with your three centre-backs. This is because teams usually play with one or two strikers.

The time when they would not be in superiority would be when the opponent has three attackers, as in a 4-3-3 formation, and they decide for every attacker to mark a centre-back. Even though Lyon did play in a 4-3-3, they did not do this.

Therefore, Nice’s three centre-backs were always in a 3vs1 situation against Lyon’s striker. This meant that they had the time and space to find a good passing option. For example, in the image below we can see how Nice’s centre-back is not being marked and so he can pass it to a midfielder calmly. This would break the initial pressure done by Lyon’s striker. 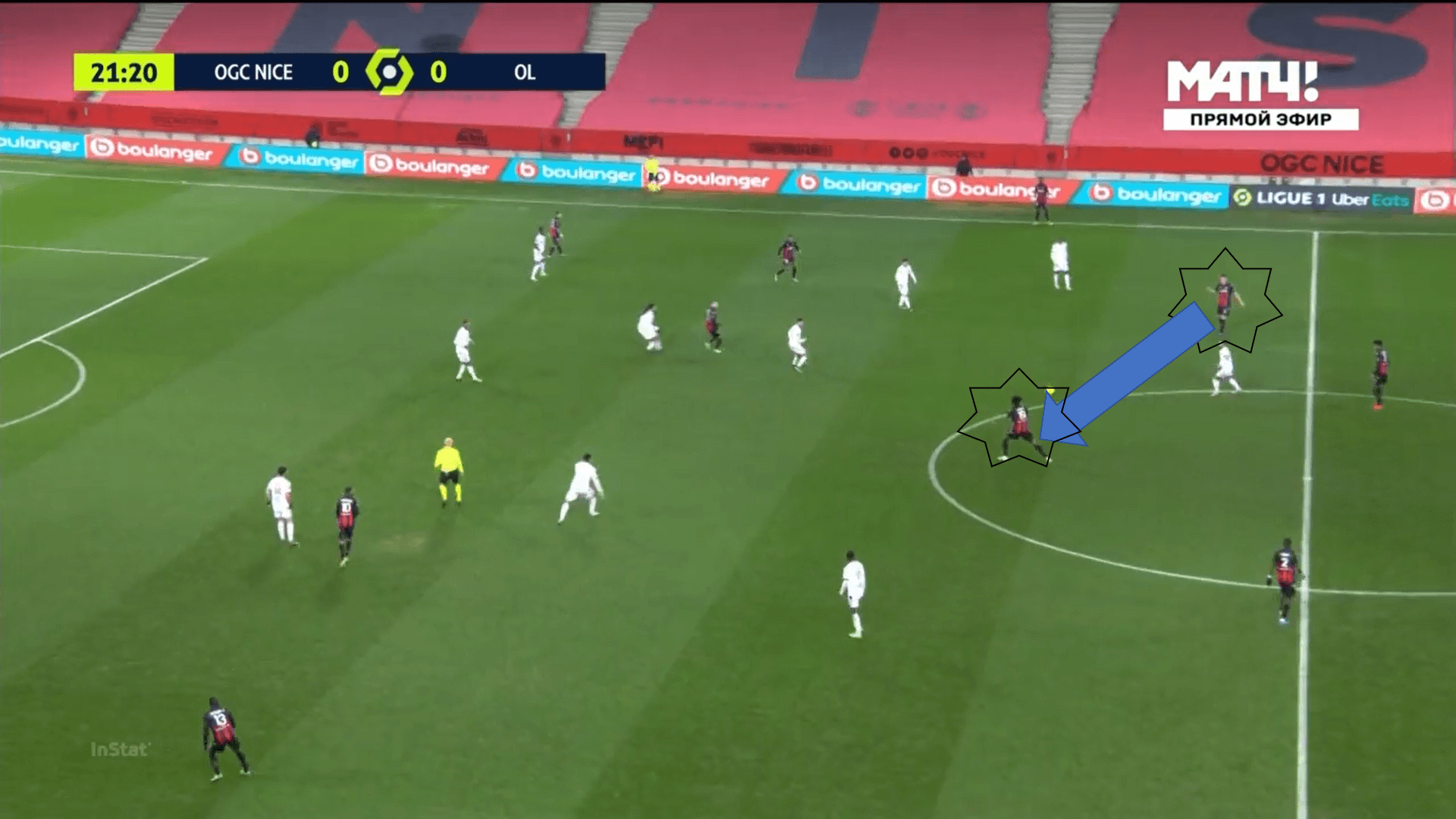 Most of the time, the midfielders would leave a significant amount of space from the centre-backs as they felt that they had enough freedom to make a good pass without needing their help. This was appreciated as it then created more options for passes through the middle.

The image below serves as an example to show how wide and advanced the wing-backs were to make the Lyon midfield stretch out more. 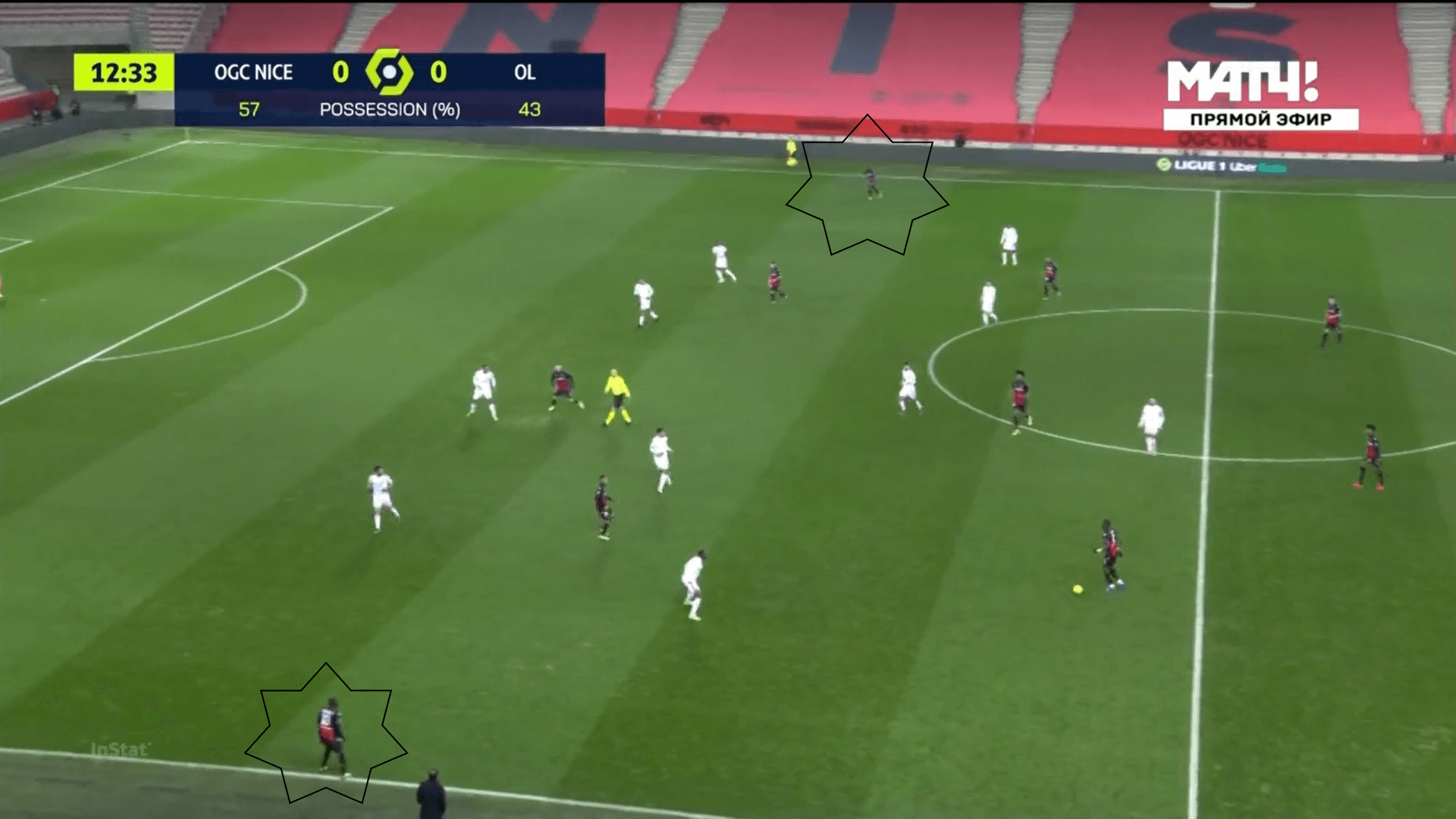 This method made the opponents wider but also provided another option to build out from if they did not find a pass through the middle. Since Lyon preferred to cover the middle before protecting the wings, the wing-backs were usually alone. Therefore, when the centre-backs did not find a progressive pass, they made a long ball to a wing-back.

This was an easy way to get into an advanced position because the wing-back would have time to control and get in a dangerous crossing position. The image below is an example of how alone the wing-back is when the centre-back passes it to him. 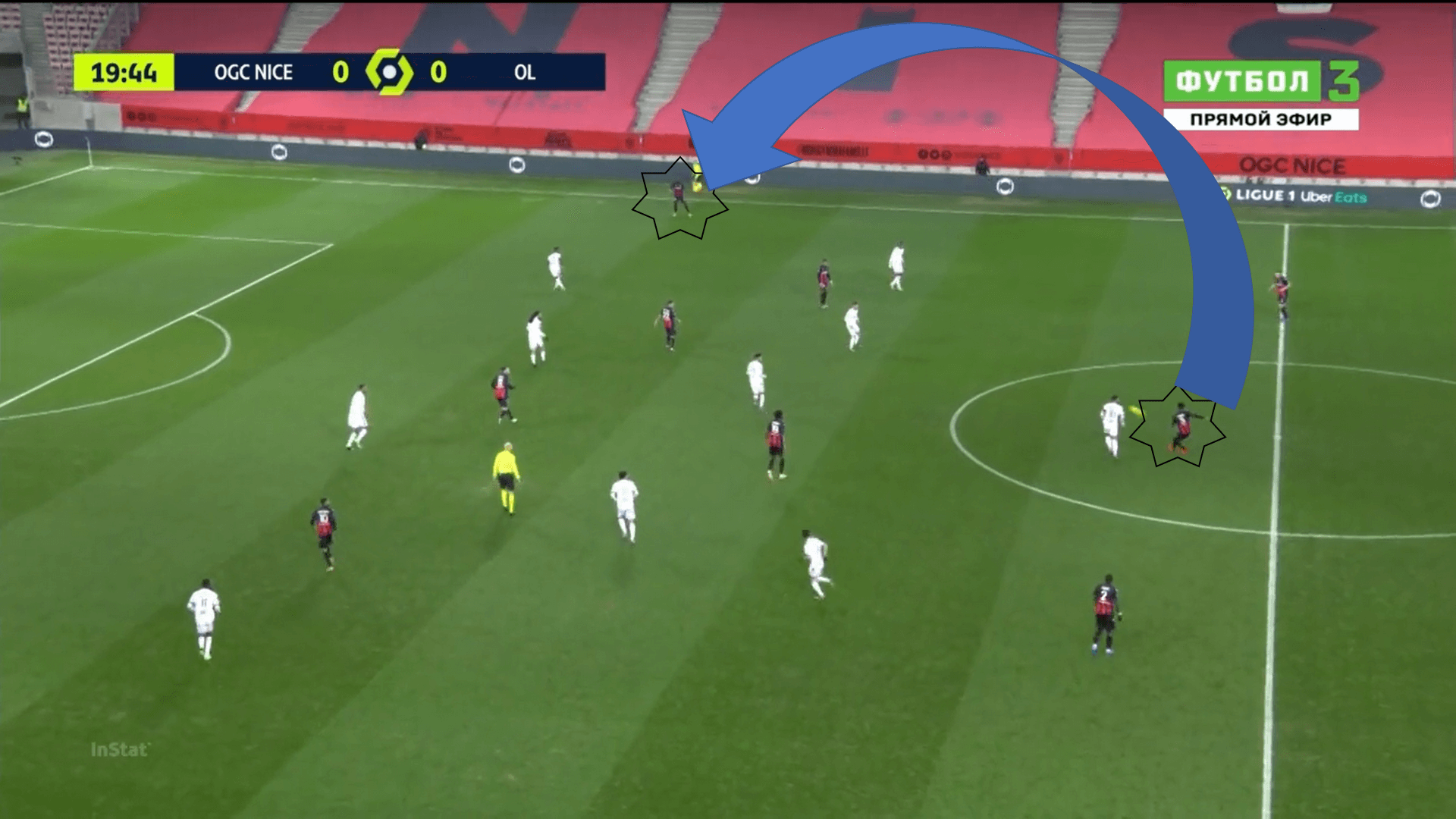 Moving on to the passing through the middle, everything Nice did in the build-up was for the creation of these passes. They made the centre-backs be in superiority to have time to find a good pass and made the wing-backs go wide to create more space in the middle.

In the middle, there were the two wingers who came inside to receive and also to create space for the wing-backs. Moreover, there was the striker Amine Gouiri who was the main receiver of these passes as he is the player with the most quality in the attack. The striker was constantly moving around places to find the best place to receive the ball in.

The reason why Nice preferred passes through the middle is because if a pass is done successfully, the player receiving can just turn around and go directly towards the goal. The striker had the most ability to receive and turn to then immediately create danger.

In the example below, we see a time when the centre-back passes it through the midfield line into the striker who passes it on the first touch. 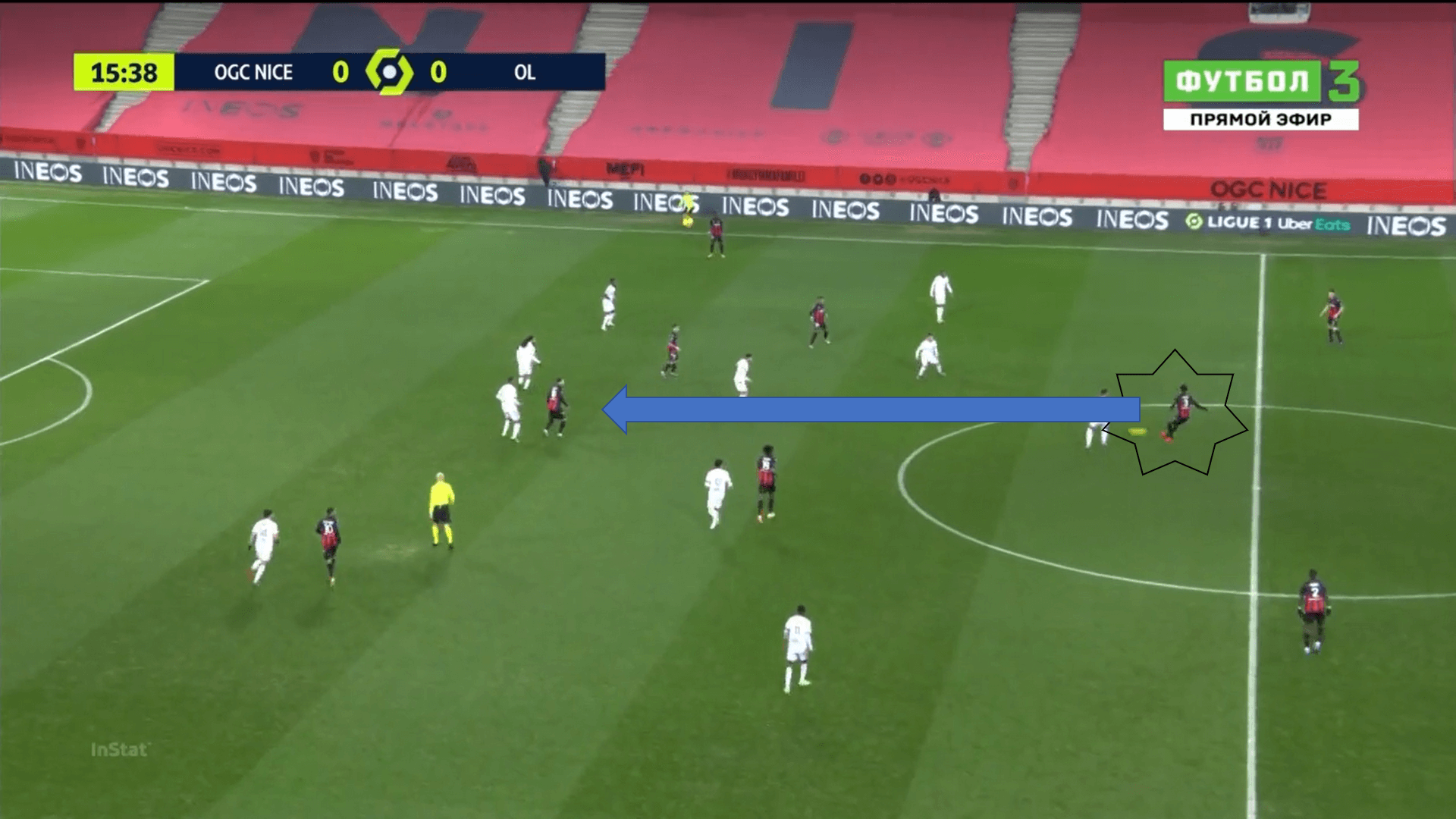 By having many options to receive passes through the middle, it becomes easier for the Nice centre-backs to choose an option. For example, in the image above, the Lyon midfielder has two Nice attackers behind him, one on each side.

Therefore, he does not know which pass to cover and tries to stay in the between but it does not work. Consequently, having many options for these passes facilitates the work for the centre-back and makes it more difficult for the Lyon midfield line.

Moreover, by having many options behind the midfield line, you ensure that you will have a superiority if the pass is successful. This is because if the pass is successful, the Lyon midfield is taken out of the play and now there is only the defensive line. In this instance, the striker receives and Nice is in a 4vs3 situation on that side which increases the danger of attacks significantly.

Lyon was aware of Nice’s preference for building up well. Rudy Garcia also knew that when using a 3-4-3 formation, the opponent is likely to use the formation to find spaces through the middle. That is why for the majority of the game, Lyon turned into a 4-5-1 when defending.

This made the wingers come down and join the midfield line. The reason why Lyon wanted to have five in the middle was exactly to counter what Nice wanted. They wanted to allow the least amount of space possible through the middle for Nice and make them play wide.

By making their wingers come down, this also helped in defending the instances when the wing-backs received the ball. The image below clearly proves the midfield line of five players. 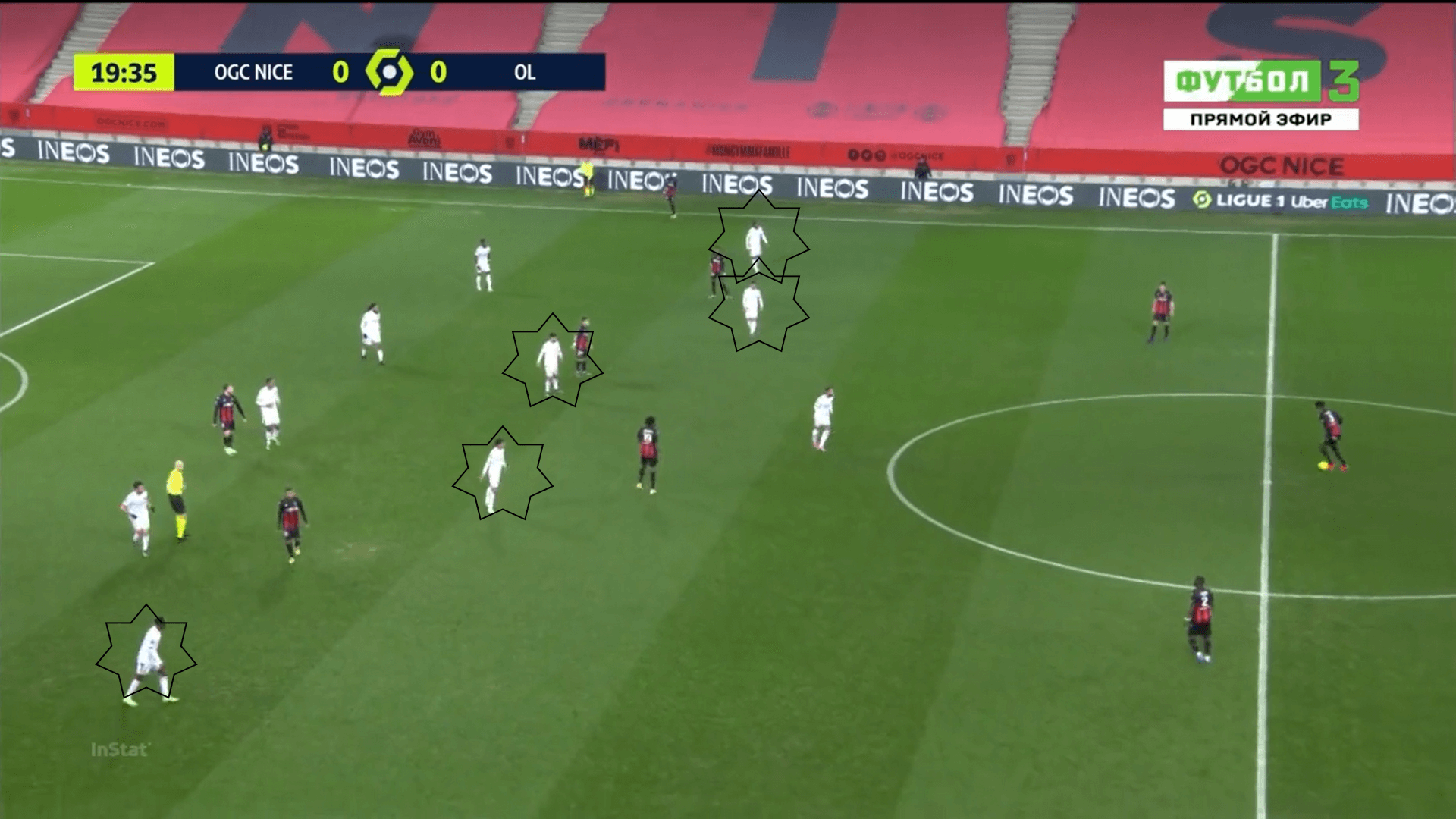 Furthermore, they positioned themselves in a low-block as they all defended in their own half. This was to make the team compact and not allow many spaces between the midfield and defensive line. Once again, this is to allow the least amount of space through the middle. Had they defended higher up; they could make their team compact but it would allow a lot of space behind the defence which the quick Nice attackers could take advantage of.

Consequently, it also meant that if Nice players did receive the ball behind the defensive line, there would already be a Lyon defender there to defend him and not allow him to turn back. So they were trying to make passes through the middle hard to make and even if they did make them, it would be hard for Nice to create danger once they received it.

Having this low-block defending encouraged the style of play they were trying to create, and this was counter-attacking. While Nice were trying to play good football by playing the ball out well, Lyon defended in their own half and waited to recover the ball to go on quick attacks.

They were efficient at these as they have quick and technical players who once Lyon recovered the ball, immediately started running. The example below shows how once the midfielder recovers, a winger and the striker are already in advanced runs in the counter-attack. Actually, their third goal came from a counter-attack. 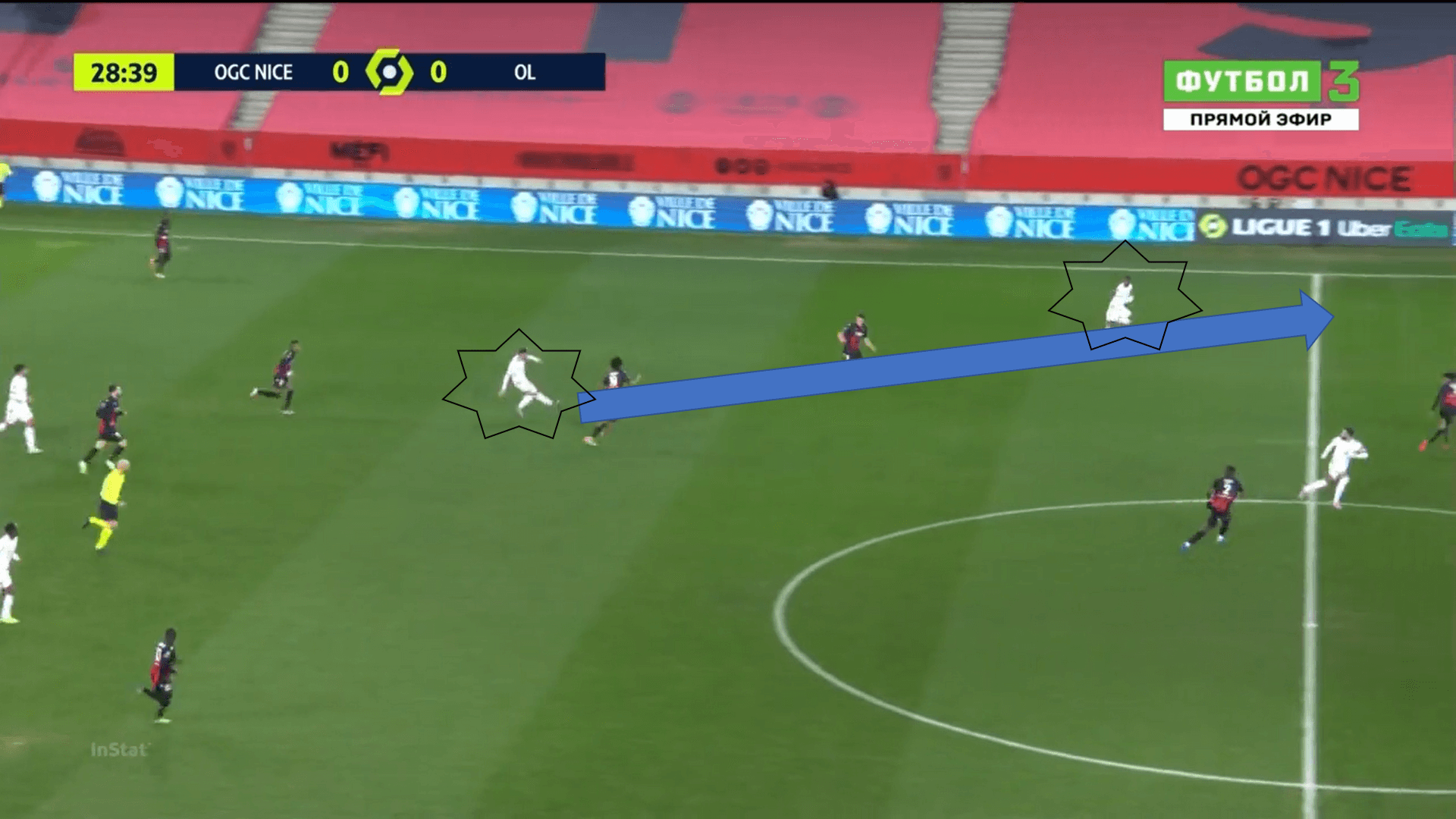 The pace and intelligent runs being made by their front three were pivotal for Lyon to succeed by playing with this style, as was the ball-playing ability of their midfield three. Paquetá, Guimarães and Aouar are all capable of playing defence-splitting balls from a short or long distance from the runner, while they’re also three fairly press-resistant players.

This created a problem for Nice’s midfielders and defenders to try and deal with and in the end, they failed to do so effectively enough and were punished as a result, with Lyon’s counter-attacking tactics leading them to a resounding victory.

Overall, Nice played with good intentions as they wanted to have control of the ball and have well-developed attacks but it was the ruthlessness of Lyon that made them win. Nice wanted to play through the middle and had three centre-backs and wide wing-backs to do so. On the other hand, Lyon defended to nullify this intention by defending in a low-block, putting 5 in the midfield, and having a compact team. Lyon were able to read the game better and Nice will have to drastically improve in order to fix their season.