A fascinating fixture where both the sides were desperate for the win in this match, but for different reasons. West Ham United Women are currently sitting in eighth in the league with four wins this season before this match and were looking to do the double over Liverpool Women in their first season in the FAWSL, whilst Liverpool Women were trying to fight a relegation battle looking even more tricky by the day. This tactical analysis will show how Liverpool’s early tactics in attack ensured that they stopped West Ham United Women from playing their fast passing game. The analysis will also show how West Ham United benefited from Liverpool’s defensive tactics as the game went on, as it helped them win this match. 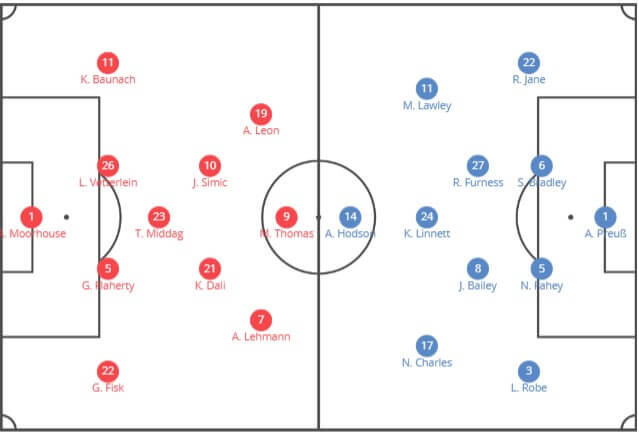 West Ham United Women made four changes from their last match, a 2-0 loss away to Reading Women. Cecilie Kvamme was on the bench, with Germany international Katharina Baunach brought in to play at left-back. Grace Fisk, recently called up by England for the first time, moved to right-back from centre-back. Other changes saw midfielder Kate Longhurst left our altogether, whilst forwards Jacynta Galabadaarachchi and Leanne Kiernan were on the bench. In came Kenza Dali, Julia Simic and Adriana Leon, as manager Matt Beard decided to switch his team around in the hope of gaining an important win. As for Liverpool Women, they made just one change, with long-serving striker Ashley Hodson given only her second start of the season, replacing Rinsola Babajide, who was left out altogether. Babajide had scored both goals in Liverpool’s last match, a 3-2 home loss to Arsenal Women.

Firstly, Liverpool Women began the game very positively in the attack. Ashley Hodson and Niamh Charles, in particular, were seemingly tasked with pressing high up the pitch, and ensuring that all of West Ham United’s thinking time was taken away from them. Below, you can see exactly how Liverpool’s attack progressed in the game’s early stages.

Liverpool set up in a way that allowed them to force West Ham to play sideways, and not forwards as they like to do. You can see how all four Liverpool attackers have positioned themselves in between the defence and midfield, and that has allowed them to close down the defenders much more easily when the home side are in possession. On a similar note, because there are four attackers and four defenders in this situation, Liverpool can go player to player, and that means there is literally nowhere for the ball to go for West Ham.

A few moments later, Liverpool were able to press the forwards, and take time away from West Ham. The arrows in the second image show the paths taken by Hodson and Charles, as Liverpool’s two main attackers, in doing just this.

Liverpool Women also attacked passively by playing in the holes between the West Ham players, as shown in the image below.

This looks like Liverpool are being surrounded, and normally it would be a fault of the attacking team, but here it is different. By using these tactics, Liverpool have forced West Ham to split apart from each other. That in turn means that there is now a greater distance for the ball to travel between the players, and that makes it easier for Liverpool Women to make an interception. This also meant that West Ham United Women’s favoured tactics of moving the ball wide and playing out that way were rendered unusable in these situations, because the length of the travelling distance for the ball to go was still there, so it comes back to the previous point.

The final point to make about Liverpool Women’s attack is that they set up with Rachel Furness in a slightly deeper position, and Kirsty Linnett was deployed in the no. 10 position. However, this wasn’t very effective, and the scoreline of 2-0 at half-time meant that manager Vicky Jepson had to change something in order to give her team more of a chance of scoring. Below shows her tactical thinking.

What she did was to bring on Christie Murray around halfway through the second half for Linnett, and played her in the deeper role that Furness had previously occupied. That meant Furness could now get more forward and create more opportunities, as she has been doing so well for Liverpool Women since her January arrival from Reading Women. What you can see in the image above is just how Murray is standing back when Liverpool are attacking, and that allows Furness to take up these positions in the box as shown below.

The fact that Furness scored both of Liverpool’s late goals backs up how this was a good change in tactics for the Reds.

As far as their defence was concerned, they managed to keep West Ham United at bay for a short while, and make them play sideways rather than forwards, just the same as in the West Ham defence. Below is an illustration of that.

The question about this is how did West Ham manage to address this, and change their tactics in order to tease the Liverpool defence apart. That will be addressed later, but here we shall look at how Liverpool Women contributed to their own downfall with a few minor errors, which, totalled together, ensured West Ham were able to break through and win the game.

Firstly, for the opening goal from Adriana Leon, you can see below the issue with the defending from Liverpool.

Essentially, what is being shown is right-back Becky Jane’s body position. She is facing towards her goal, and not towards the player and running backwards. This means that, when Leon cuts inside, as shown by the arrow in the illustration, Jane is unable to position herself so as to block the shot. However, had she been positioned so that she was facing Leon, and with her back to goal, there is a chance that she may have been able to block the shot. It’s not a definite, but it’s a possibility.

However, Jane is not to blame for the loss, because this was only one cog in the whole machine that went wrong. Below, you can see how Liverpool’s defence, which was initially well-organised and disciplined, became more and more separated as the game went on.

This allowed West Ham United to have more space in attack, and particularly in the gaps between the defenders, so that is what allowed West Ham United to score goals. The difference, to summarise, between the initial stages and these stages, is that the gaps between the Liverpool Women defenders grew bigger, and that gave the likes of Martha Thomas, Adriana Leon and Alisha Lehmann the ability to exploit the space and create plenty of opportunities.

Moving on to the West Ham attack, and how it got better as the game went on. Firstly, they always had plenty of pace in attack, with Alisha Lehmann and Adriana Leon, as well as Katharina Baunach making runs forward from left-back, as she characteristically does. Matt Beard’s side were able to catch Liverpool Women out by pressing high and intercepting balls in Liverpool’s third, as shown below.

This is what came from West Ham’s ventures forward. Essentially, it seemed like Liverpool were being a little naive when defending, and playing the ball into the wrong areas, but the truth is that actually West Ham United Women deserve the credit for the way they chased the balls down and put Liverpool Women under pressure.

When in possession and attacking, they always ensured they had plenty of options when advancing.

This gave Liverpool Women plenty of things to concentrate on when they were defending, and you can see how, despite having plenty of players going backwards, the defenders were also facing towards their goal, which meant that, much like with Becky Jane earlier, it was harder to keep an eye on where the ball was going when setting up like this, However, this is not something to criticise them for, because ultimately in these situations, all players care about is staying between their goal and the advancing opposition, and that’s what they are doing at the end of the day.

In the first half, West Ham United Women were helping Liverpool out by attacking in narrow channels, and you can see below how that helped Liverpool defend against them.

The way that West Ham could have stopped this is by not getting three players bunched around the ball. One of those three could move towards the other two outside of the square, ensuring that that becomes a three on three, whilst another of the three in the square needs to create the option further down the wing. That would then mean West Ham United Women would have someone to pass the ball to, before crossing it into the box and giving the players outside of the marked square the chance to get on the end of it.

As the match went on, the Hammers did do this to an extent. You can see below how they have managed to get three attackers putting pressure on the now-fragile Liverpool defence.

West Ham United Women caught Liverpool Women out with this, as they had become more organised and had forced Liverpool to stretch out a bit more, as previously explained, and that meant it was now not so easy to defend against them. Certainly, West Ham’s goals were all scored from positions where they had managed to open up and get in behind the Reds’ backline.

To conclude, Liverpool Women started with intent and a purpose, and knew what they wanted to do, and it worked to start with. However, as the game went on, West Ham changed their tactics in attack, and turned the game in their favour. This analysis has shown how that happened, and, as well as the humbling they received here at Rush Green, Liverpool Women now find themselves in the relegation zone of the WSL with time fast running out for them. For West Ham United Women, it was a solid performance, and they will be happy with the result.