The final round of 16 match at EURO 2020 saw Sweden play Ukraine in Glasgow, with the winners progressing to play England in Rome in the quarter-finals. Sweden had an excellent group stage campaign, finishing on top of Group E with two wins and a draw, and ahead of Spain as a result. Ukraine, on the other hand, had a much more volatile time – they lost 3-2 to the Netherlands in their opening match, defeated North Macedonia 2-1, and despite a 1-0 loss to Austria in their final group game, managed to qualify as the third-placed team from Group C.

Sweden manager Janne Andersson was able to bring Dejan Kulusevski back into the lineup following a positive COVID-19 test, so he started up front alongside Alexander Isak. The rest of the side was as expected.

Ukraine manager Andriy Shevchenko changed systems and moved to a 3-5-2 for this game – veteran Taras Stepanenko came into the XI, with Ruslan Malinovsky on the bench, with Serhii Kryvtsov also coming in as the third centre-back. The rest of the side was the same as the one that lost to Austria in their last group game.

Both sides started strongly, with Ukraine having the first proper chance through Roman Yaremchuk, whose powerful shot was too close to Sweden goalkeeper Robin Olsen, and he was able to make a good save as a result. Ukraine took the lead just before the half-hour mark through Oleksandr Zinchenko – the Manchester City man getting on the end of a fantastic outside-of-the-boot cross from Andriy Yarmolenko and volleying into the net. Sebastian Larsson came close for Sweden soon after, and they were back on level terms just before half-time through Emil Forsberg, as his effort from outside the box took a deflection and bounced over the diving Heorhiy Bushchan and into the net. The second half saw Sweden hit the woodwork twice through Forsberg, with Serhiy Sydorchuk also doing the same for Ukraine. Neither team was unable to get the breakthrough, and so we went to extra-time. Sweden defender Marcus Danielsson was sent off in the first period of extra-time for a horrible challenge on Artem Besedin, who had to be substituted due to its after-effects, and while it seemed as though we were heading for a penalty shoot-out, Artem Dovbyk popped up in the box to get on the end of a fantastic cross from Zinchenko and score in the last minute of extra-time. Ukraine thus squeezed through to the quarter-finals of EURO 2020 at the last minute. Check out our EURO 2020 analytics report from this match which has all the key statistics, data and visualisations. 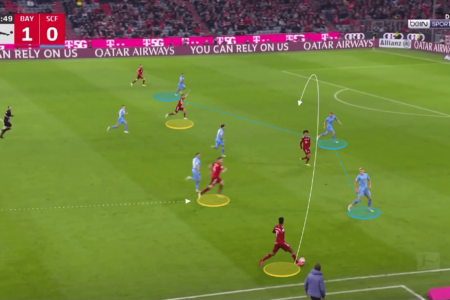