MC Alger v Wydad Casablanca: Moroccans’ domination only enough to get an away draw in the CAF Champions League quarter-finals – tactical analysis

Last Saturday, the CAF Champions League quarter-finals started. One of the standout matches was between the Algerian side MC Alger and the Moroccan Wydad Casablanca, once and twice champions of the competitions respectively. The last time Wydad won the competition in 2017, they couldn’t reach the final of the Club World Cup against Real Madrid so they’re looking for another opportunity to play the prestigious tournament. Both teams have produced good talents in the last decade, like Bono, who went from Wydad to Atlético Madrid in 2012 and now plays in La Liga for Sevilla, but they have managed to keep their best players in recent seasons in their pursue for local and continental glory.

Alger arrived at the match standing seventh in the Algerian Ligue 1 and after finishing second in Group D behind Espérance Sportive de Tunis. On the away side, Wydad finished first in Group C above Kaizer Chiefs and currently stand first in the Moroccan League.

Both Northern Africa giants provided a vibrant match that resulted in a 1-1 draw. In this tactical analysis, we’ll look at both teams’ tactics and their approach to the first leg of the continental competition’s quarter-finals. 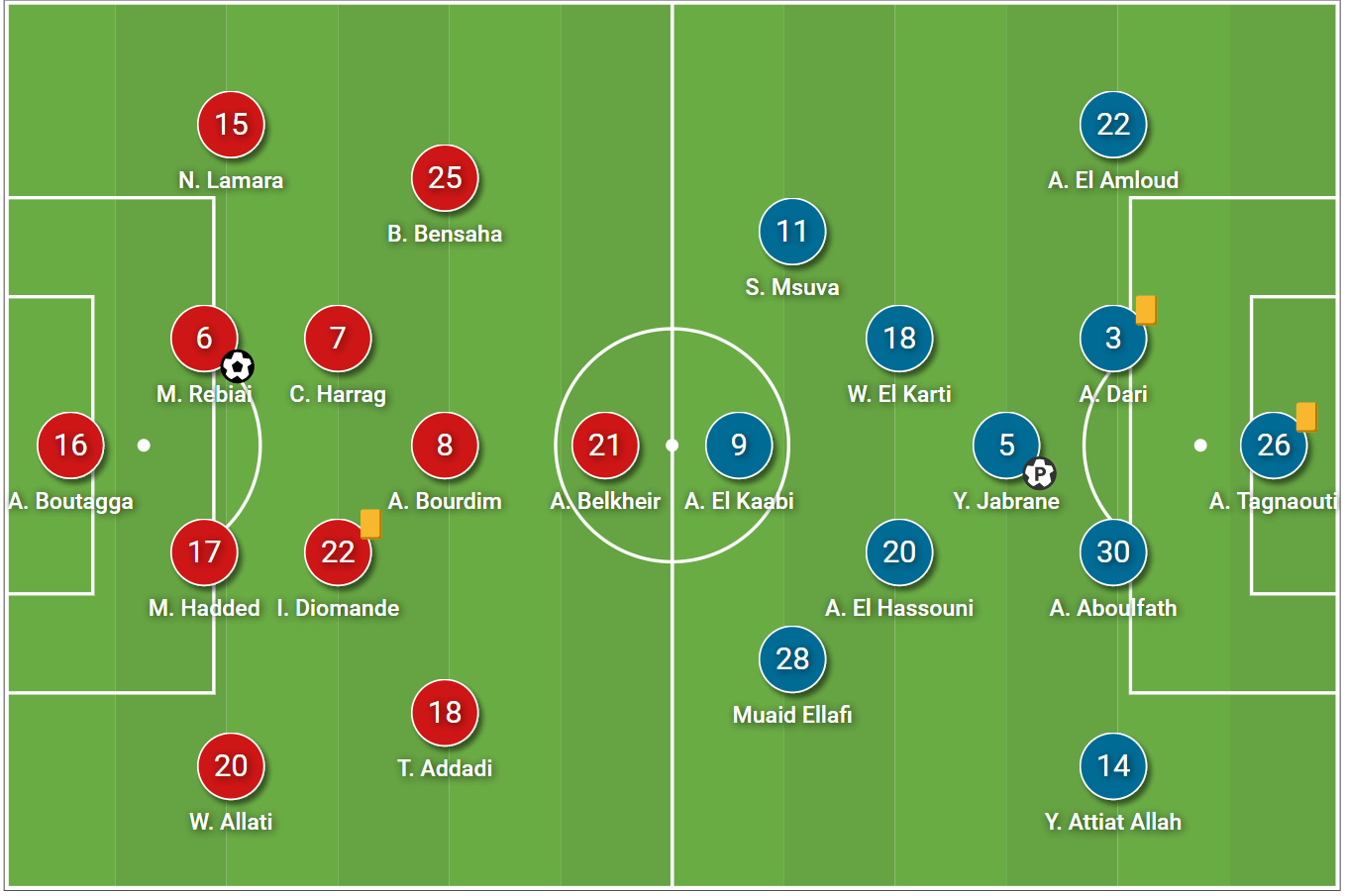 For this match, the Algerians’ coach Nabil Neghiz opted for a 4-2-3-1 formation with two central midfielders covering space in front of the defensive line, probably expecting Wydad to dominate the game.

On the away side, the Moroccans’ coach Faouzi Benzarti opted for a 4-3-3 formation with lots of players capable of getting forward and threat the rival goal. The two centre-backs plus the defensive midfielders were in charge of defending, leaving the rest of the squad freedom to get forward, press and attack.

Wydad dominated the first half, with 58% possession and 6 shots. They hit the crossbar twice and scored once even if it was wrongly disallowed. Alger struggled to play past Wydad’s press in the first half and even if they have some promising counters, they lacked the quality to finish them and only got one shot in the first 45 minutes. Both teams were very aggressive and looked to stop play with fouls (Alger committed 9 and Wydad, 8).

Wydad kept dominating the second half until they scored from a clear penalty on the 66th minute. After that, Alger were forced to attack more and had more of the ball, ending the game with 46% possession, much better than the 42% they had on the first half. By committing more players forward, Alger enjoyed more chances, even if they weren’t very clear. All their shots came from set-pieces and/or from outside the box and they only generated 0.61 xG, which was enough to score their goal.

Wydad had some good chances on the counter and from crosses but they struggled with their finishing in general. They generated 1.23 xG plus a penalty and a wrongly disallowed goal but only managed to score from the spot so they surely feel they deserved more than a 1-1 in this game.

Despite being the away team, Wydad looked to control the game and impose their attacking style. So far in the CAF Champions League, they were usually dominating their rivals with 1.63 goals scored and 0.25 conceded per 90 and they kept the same approach in the first leg of the quarter-finals.

Wydad’s attacking style is based on playing forward as often as possible and getting players into the final third and in the box to maximize their options of getting chances. This aggressive positioning also allows them to press and counter-press very effectively as their players don’t need to make long efforts after losing the ball because they’re already close to the rivals.

In the buildup, Wydad looked to play short, inviting Alger to create spaces to play line-breaking passes or long balls. They used few players in the buildup and when Alger’s press was too much to play through it, they used direct balls, having the numerical advantage to win the second ball or press.

In the picture below, we see one of the times when Wydad had to play a direct ball from the defensive line. As the ball flies, the highlighted players get into good positions to dominate the space where the second ball could fall and even if Wydad’s striker doesn’t win the aerial, they still win the ball back and start their attack from the final third. 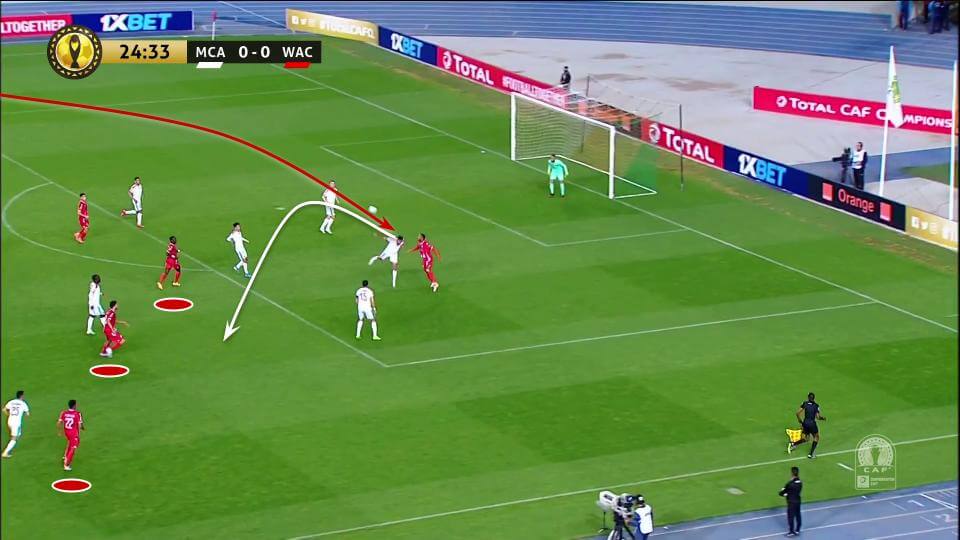 By having many players in advanced positions, Wydad always had options to progress. 20.6% of the Moroccans’ passes were progressive passes (96) and 38% forward passed (177).

When the attacks advanced into the rival final third, the centre-backs were often the only two players who stayed behind, being in charge of recycling possession and also keeping the team compact when pressing.

In the next screenshot, we can see up to eight Wydad players, meaning only the two centre-backs are behind. This determination to get players into attacking positions was key for Wydad to create chances and defend high up the pitch. 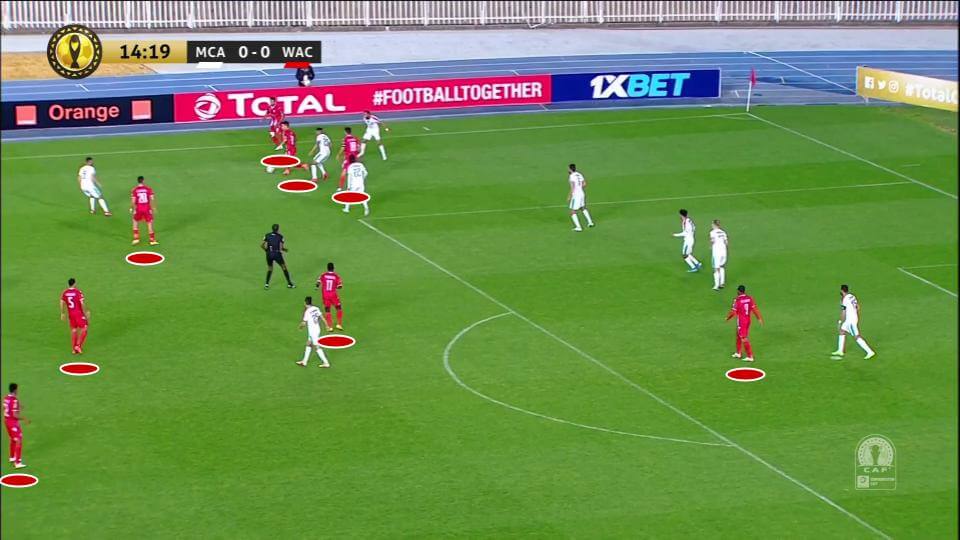 Wydad instructed their players to advance all the time, with or without the ball. When Alger was forced into a low block, Wydad players kept advancing and often created situations in which the box was overloaded with attacking players.

This wasn’t only interesting from the attacking point of view. Having so many players in the rival final third meant Wydad could easily press very high up the pitch. Wydad allowed just 5.42 passes per defensive action, 33% less than their average in the CAF Champions League this season, forcing Alger to clear the ball away very often or to take risks in the buildup.

The sequence below shows a good example of how overloading the box becomes a good counter-press after losing the ball. In the first picture, Wydad have six players in the box or at the edge at the moment of crossing. 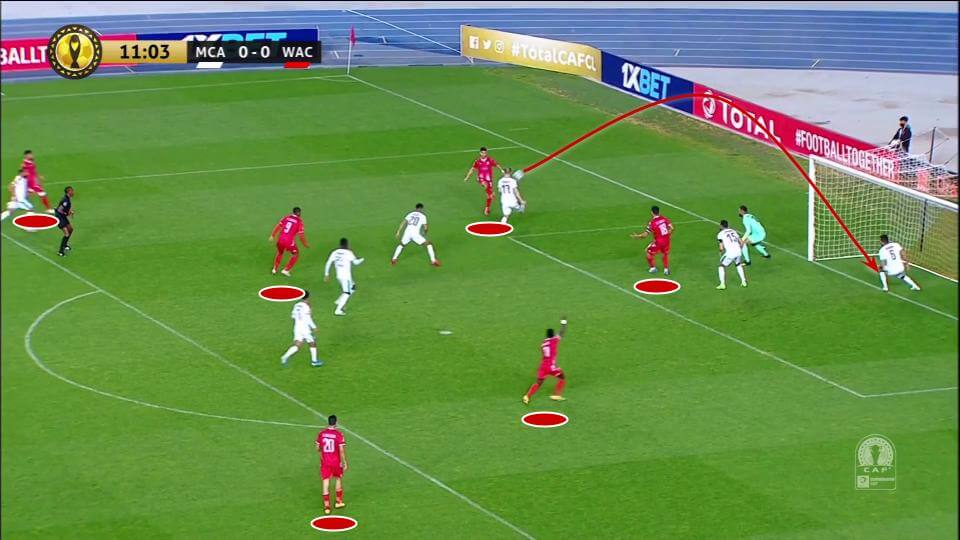 Just four seconds later, we can see eight players pressing almost inside the box, forcing Alger to clear the ball away. Wydad’s centre-backs pick up the clearance and restart the attack. 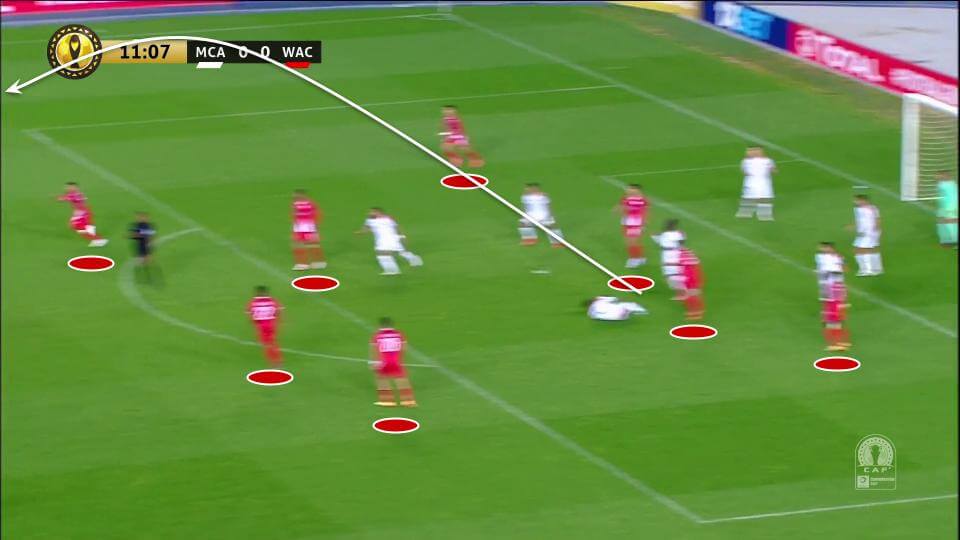 Seeing all this, it isn’t surprising that Wydad created so much danger with crosses. They were constantly populating the box with lots of players and the delivery from the wings was quite good. Wydad players arrived at the box in different waves and attacking different zones so there were always plenty of options for the ball-possessor to pick. Below, we see some examples of this occupation of the penalty box that generated the best chances (including a wrongly disallowed goal) for the away team. 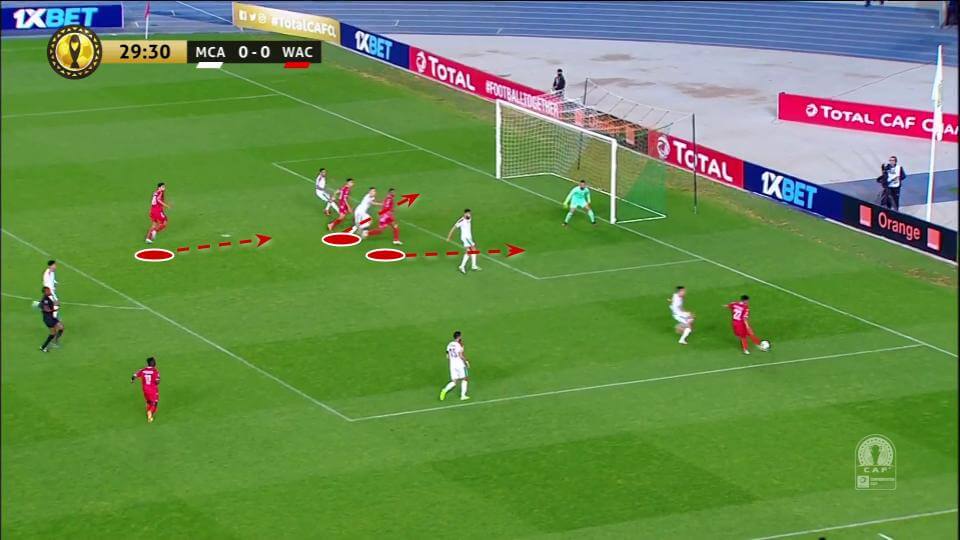 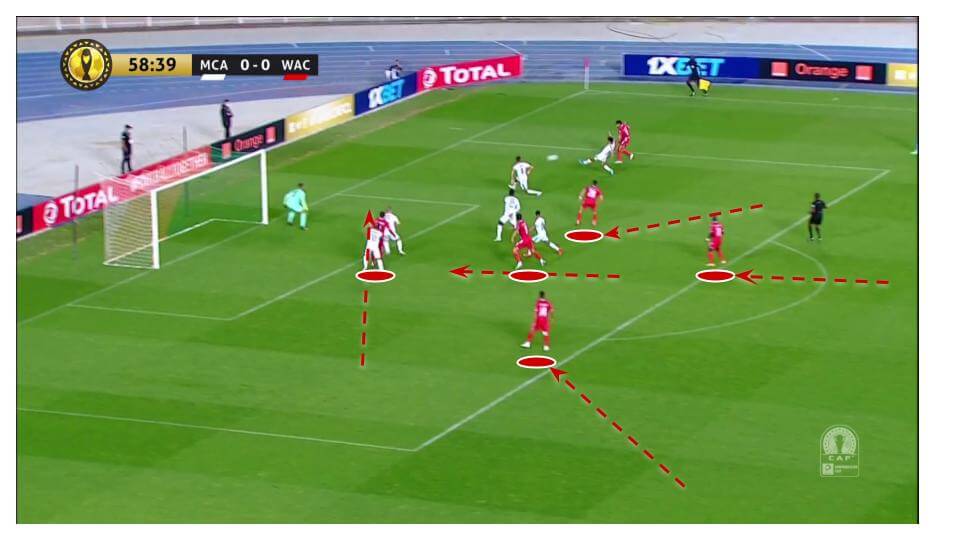 Finally, Wydad’s tendency to play on the front foot and get their players into high positions didn’t only work when counter-pressing. They also looked to press Alger in the buildup for most of the game and win the ball back in the opposition half to start their attacks from better positions.

Below we see an example of their pressing setup, with up to seven players in Alger’s half. This aggressive press forced Alger to play risky passes (like the one marked in the picture) or long balls that were easy to control for Wydad’s defensive line. 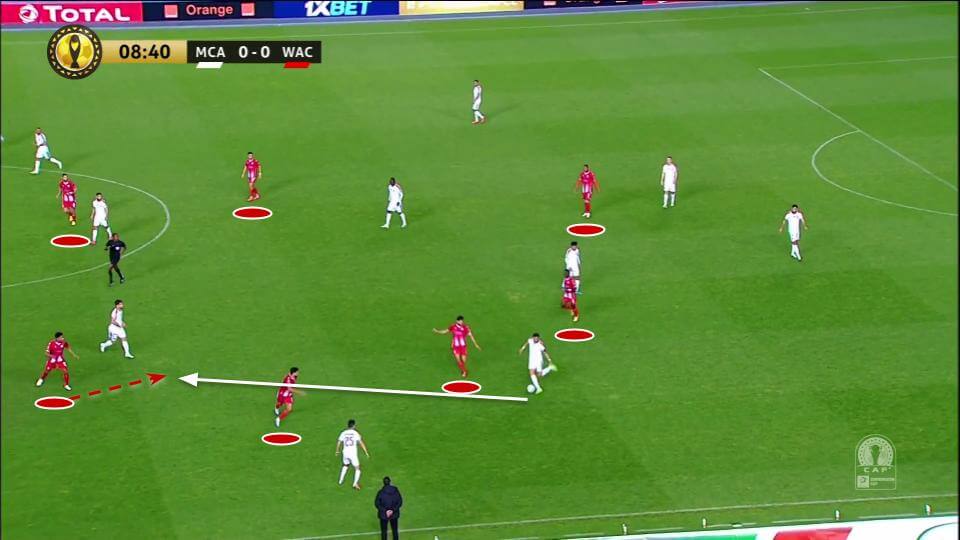 Wyydad’s play worked well both on and off the ball as they managed to connect every phase of the game and build a consistent and coherent game plan. They also showed high aggressiveness levels in tackles and duels, winning 65.5% of their defensive duels and committing 21 fouls, both figures higher than Alger’s (50.77% and 16).

Despite being the home team, Alger struggled to compete against Wydad’s pressing structure and were lucky to get away with a draw in this match.

Alger looked to buildup from the back but they never found the way of playing through Wydad’s press. The defensive line often found a lack of central passing options, be it because Wydad controlled players in those positions well or simply because there weren’t any players willing to drop deep and create superiorities at the back.

Alger’s full-backs and midfielders didn’t really know if they had to get forward and fight for the second ball or come deep and take the ball and usually found them in a middle ground that didn’t allow them to do either.

In the picture below, we see one example of Alger’s ineffective buildup. Despite being a 7v7 situation in their own half, Alger didn’t have any clear passing option. The left-back was too close to the centre-back and didn’t offer the width needed to switch play and the central midfielder demanded a line-breaking pass that would probably be too risky for Alger’s centre-back, forcing him to clear the ball away. 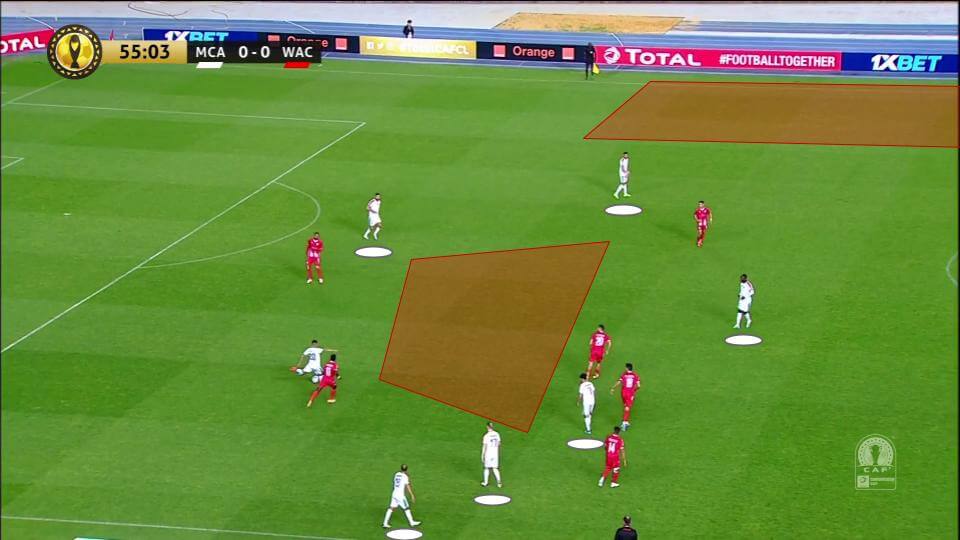 The lack of players in both highlighted areas above left the ball-possessor with no other option than getting rid of the ball with a direct pass.

Alger were limited to just 0.66 xG in the match and were lucky to score a goal. They shot eight times in the game (just two on target), four of them from outside the box and five from set-pieces.

In open play, they could create some danger with counterattacks or when Wydad made a mistake trying to get their defensive line out. Wydad looked press as soon as they could and this created some chances to play balls in behind when the defensive line wasn’t coordinated.

Below we see one of the times when Wydad’s defensive line didn’t advance at the same time, allowing Alger to play a dangerous ball in behind. 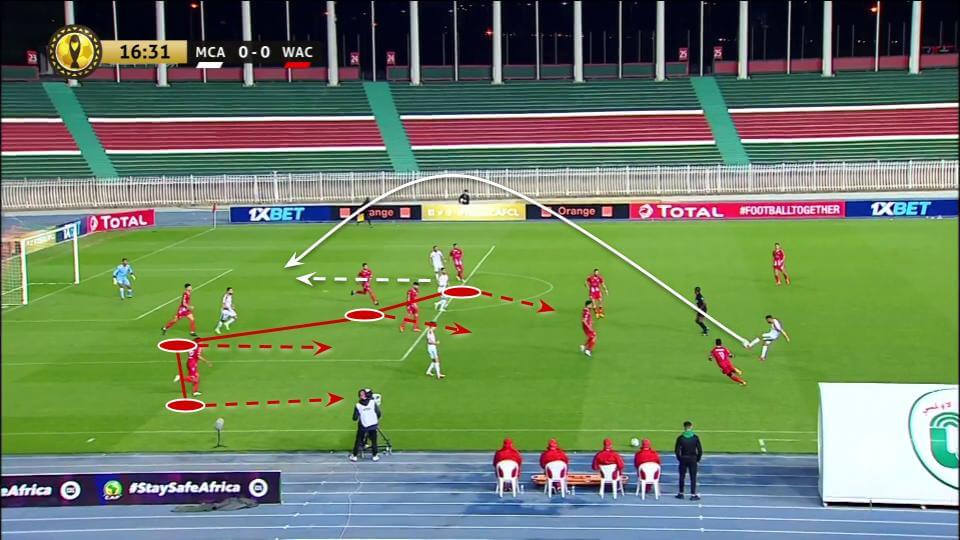 Alger also had some chances to create something in transitions, even if they lacked the final touch to translate them into chances. Wydad building up with few players meant they were vulnerable to transitions and the few times their defenders lost the ball, Alger had the occasion to counterattack.

Let’s see an example of these transitions that could have been Alger’s way of winning the match. In the first picture below, Alger have just recovered the ball in the spot marked with an X and they have a chance to launch a 3v3 counterattack. They manage to get close to the box but once there, they lack ideas and Wydad have the time to restructure and get back to defensive positions. 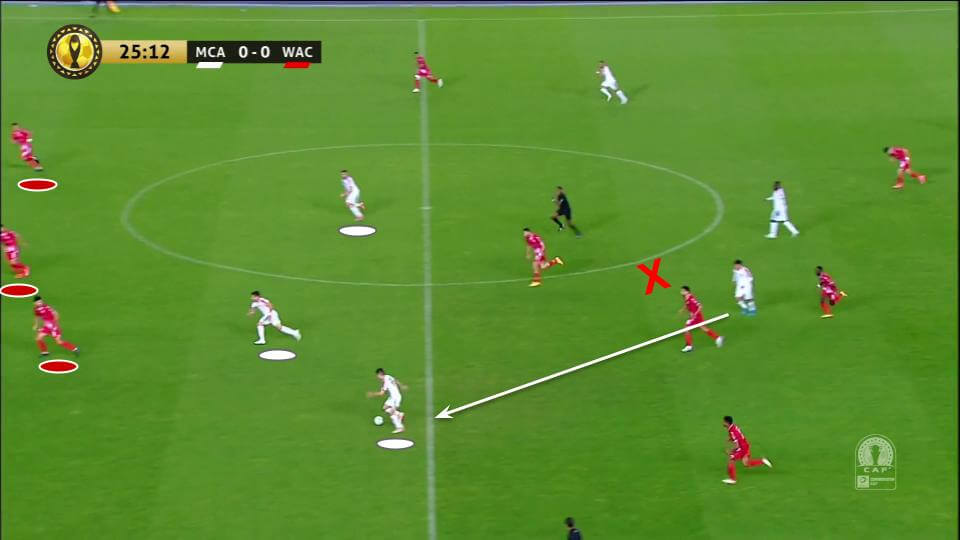 Even when they were winning, Alger lacked presence in the box and Wydad felt comfortable when they had to defend after scoring. Below we see a good example, with Wydad being fully structured to defend their box with eight players and Alger only threatening with one. 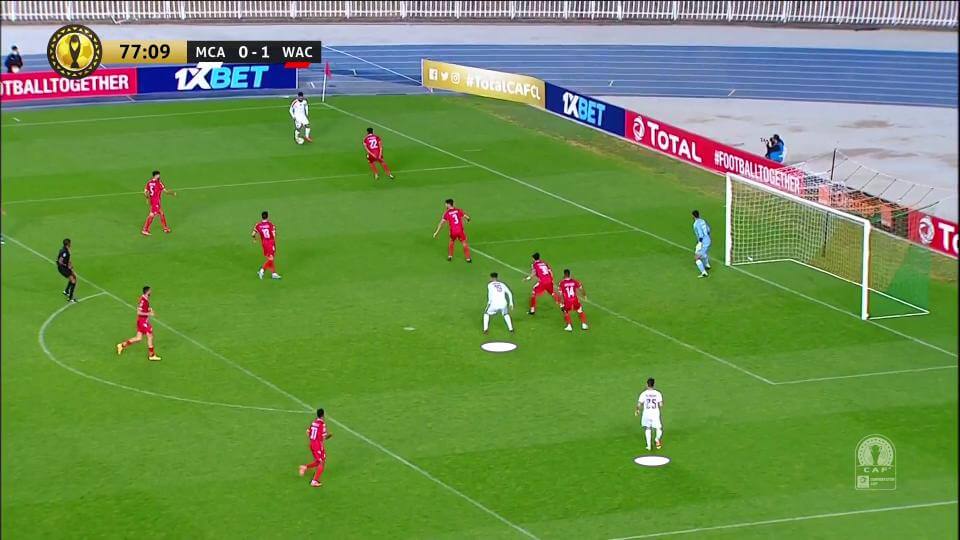 Alger’ late goal came after an unnecessary foul from the Wydad defender, who slipped and brought a player down. The centre-back Miloud Rebiai scored from the resulting free-kick with an unlikely header and punished Wydad’s naivety in this play in the 83rd minute.

Alger weren’t the favourites for this game and Wydad had an overall better performance as we have seen in this tactical analysis but the final result leaves everything open for the second leg of the CAF Champions League quarter-finals.

If Wydad can repeat a similar performance and with the away goal playing in their favour, they’ll have a lot of chances of getting through to the semi-finals. However, Alger are still alive and they have some time now to tweak their tactics and try a different approach for the away game in which a victory would get them through.