When Pep Guardiola moved to Germany to join Bayern Munich in 2013 there was a sense that the Spaniard would favour consistency rather than revolution. This was afterall the coach who had created one of the most incredible sides in living memory as his Barcelona side passed and probed all opponents into oblivion.

Guardiola is a coach with a clear sense of self and it was apparent early on that the plan was to move the tactical game model lock stock and barrel from Catalonia to Bavaria. This plan was further suggested by the recruitment at the German side prior to Guardiola’s first season as the coach was intent on signing the young Spanish midfielder Thiago from his previous side. Thiago was seen as the heir apparent to Xavi as the engine of the Barcelona side and his departure for Bayern felt like a changing of momentum at the Spanish side.

Gradually, however, Guardiola found that the German culture of counter-pressing when out of possession was prevalent throughout the whole league. This meant that the passing angles that Barcelona had used to progress the ball through the opposition defensive structure was no longer as clean as it needed to be. Indeed, even the smallest sides in the league were willing to face off against Bayern and press then incessantly as a means to defend as far from their own goal as possible.

This point is, for me, the key in Guardiola’s coaching career as we saw for the first time that the Spanish coach had the courage and ability to adapt his game model. The heart of the matter was that Bayern needed a way to assert more control over the game in order to prevent the opposition from pressing to win the ball back and then launching quick transitions in order to overload the Bayern defensive block. In order to do this Guardiola came across an interesting tactical tweak that needed the support of two of the most tactically intelligent players in the Bayern squad, it just so happens that these players were both fullbacks.

Guardiola began to ask Phillip Lahm, the right-back, and David Alaba, the left-back, to move inside into the half-spaces when Bayern were in possession. They often saw themselves flanking the ‘6’ at the base of the midfield in the 4-3-3 system that Guardiola continued to prefer. This inverted movement saw Bayern able to progress the ball through pressure much more cleanly and they created a platform from which the rest of the team could launch attacking movements. From the moment that the concept of inverted fullbacks became so integral in the Bayern game model we saw Bayern begin to fully dominate under Guardiola.

In this article we will look at different situations in which using inverted fullbacks can allow your team to control and dominate the centre of the pitch. This will show how these players can aid and support the ball progression as well as how they can be used to disrupt the defensive line of the opposition. 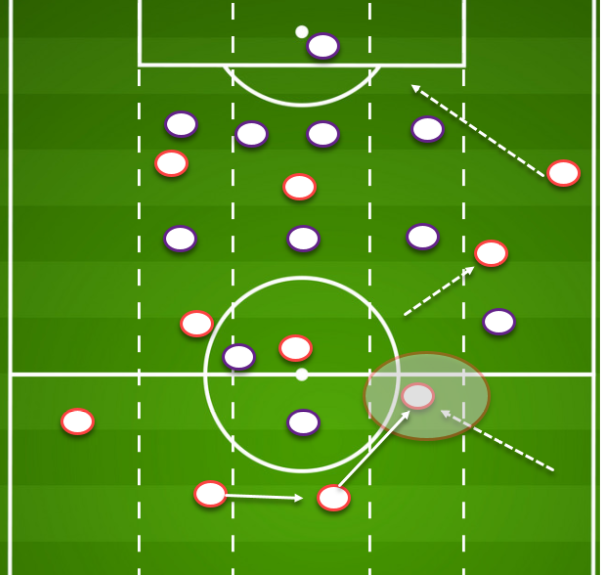 First of all we will see one of the most prevalent examples of a fullback moving into an inverted position across the 2019/20 season. This was, of course, the movement of the Liverpool right-back Trent Alexander-Arnold (TAA) into the half-space. In a sense this is a movement that has its roots firmly in the decision of Guardiola to ask his Bayern fullbacks to make a similar movement.

The Liverpool coach, Jurgen Klopp, also decided to prioritise this movement from TAA because he wanted to give his Liverpool side more control of game situations in which the opposition were unlikely to force the issue and were happy to sit in a deeper defensive block.

In an interesting twist, Klopp was, of course, coaching in the Bundesliga when Guardiola arrived in Germany and Klopp’s Borussia Dortmund side were one of the foremost proponents of counter-pressing in the German game.

TAA is a fantastic ball player and great progressor of the ball and as such Klopp wanted him to see more of the ball in the attacking phase. In order to successfully utilise this movement, however, Liverpool would need to ensure that they still maintained width on the right-hand side. Otherwise the opposition would drop into a narrow defensive block on that side and any advantage they had gained in moving TAA into the half-space would be lost. Normally, this would result in the wide attacker staying wide to provide width. Liverpool though have Mohamed Salah in that position and the Egyptian has a clear preference to attack inside. Instead, Klopp asked Jordan Henderson, who was playing as the right-sided ‘8’, to sacrifice himself in making runs outside to provide width in the attacking phase. 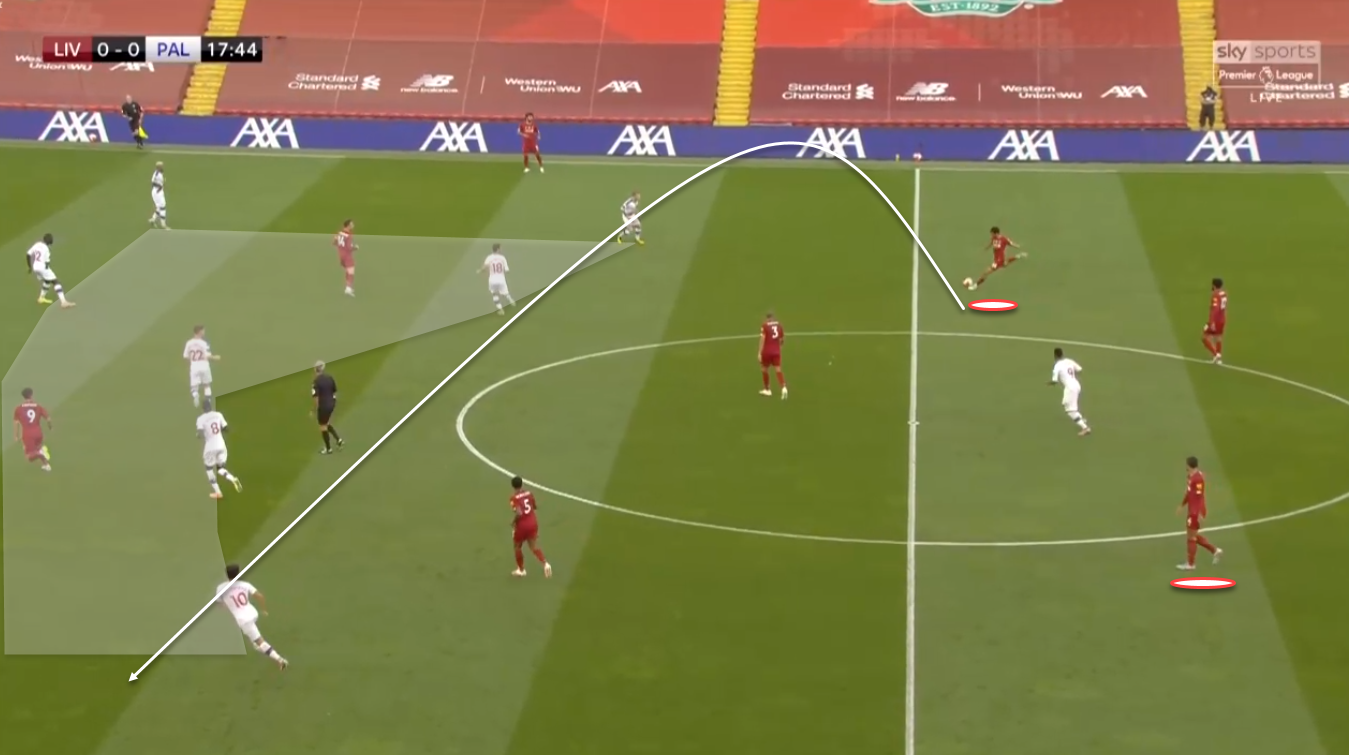 We see the effect these movements have above as TAA is able to take possession in the half-space against a Crystal Palace side who are looking to sit in a deeper defensive block. The young England international is then able to use his passing range to play a long diagonal pass that accesses the space at the far side of the defensive block. 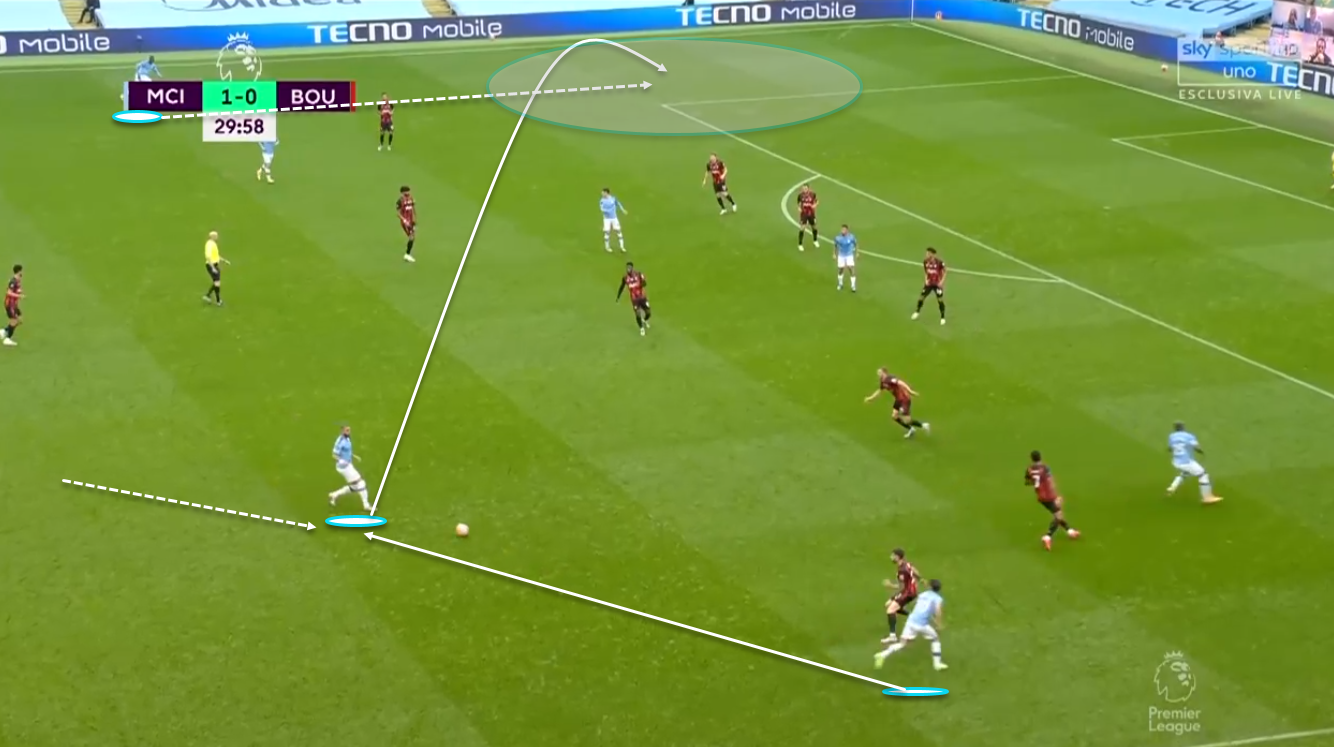 We are still seeing similar patterns from Pep Guardiola, now of course the coach of Manchester City, and here we see their right-back, Kyle Walker, receiving a pass in the half-space before looking to play the same diagonal pass to exploit space that we saw above from TAA. Indeed, under Guardiola it is fair to say that Walker has developed his game to the point that he is barely recognisable from the player who moved to Manchester City from Tottenham Hotspur. At that point Walker was a strong if one-dimensional right-back who relied on pace to get around the outside. Now he is a more tactically nuanced player altogether. 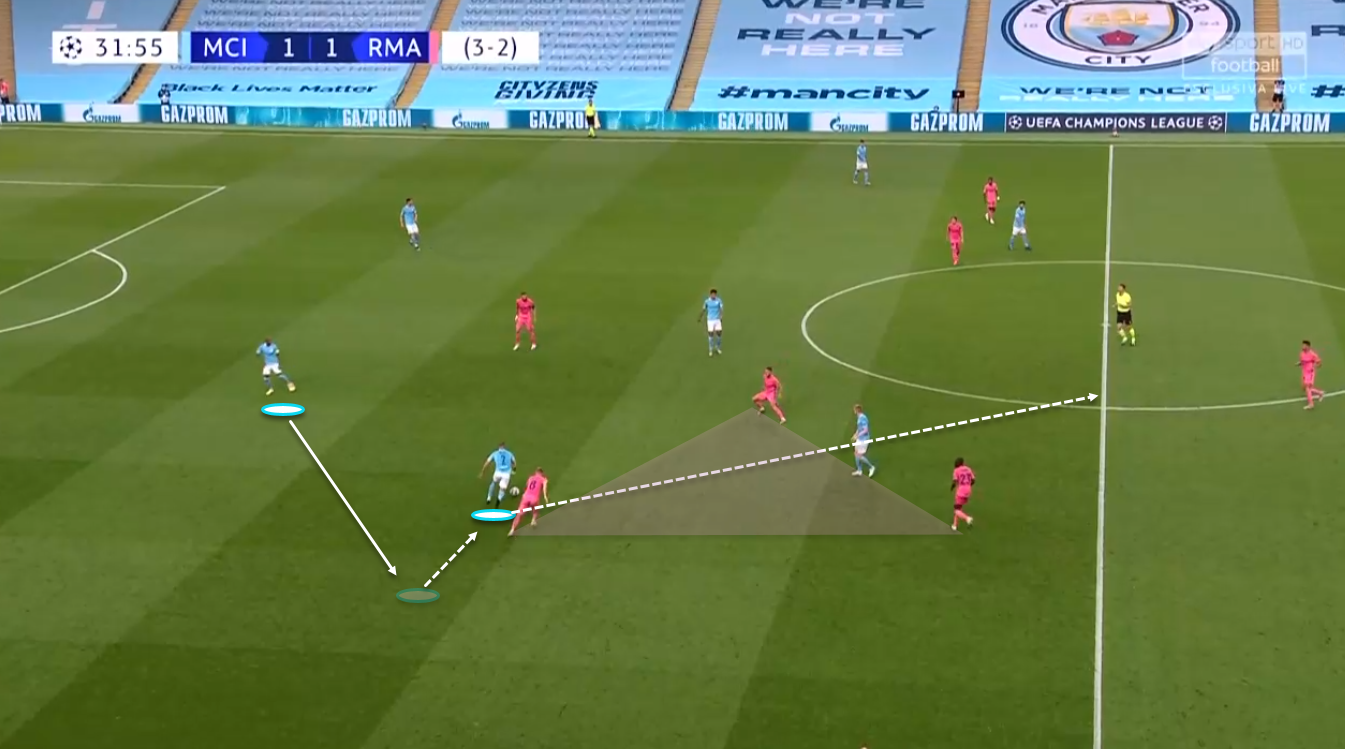 Indeed, when receiving the ball in an inverted position we see Walker pose a dual threat. He can play the diagonal switches that we saw above but he can also control the centre by driving in possession through a group of opposition players. We see an example of this above from Manchester City’s Champions League knockout match at home to Real Madrid. As Walker received possession he drove through a group of three midfield players. This puts City in a position of real positional superiority and helps them to control the centre and therefore the game. 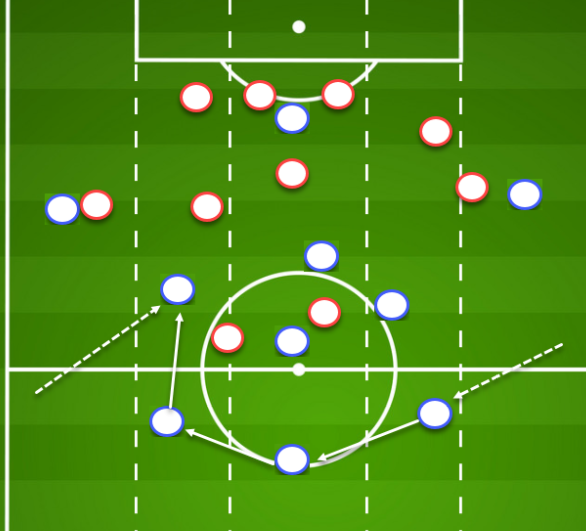 There are other times in which a fullback making an inverted movement can help with ball progression without the ball being switched into space as they provide opportunities to create numerical or positional superiorities over the opposition. We saw one such example in a recent Premier League match as Leeds, under Marcelo Bielsa, used Stuart Dallas as an auxiliary midfielder in possession of the ball against a difficult to break down Sheffield United side.

Bielsa is, of course, one of the most innovative coaches in football and he is known to favour rotations of this type in order to create opportunities for his side to progress the ball cleanly into the final third of the pitch. In this example Dallas played constantly in the central areas as Leeds were looking to attack while Luke Ayling, normally a right-back, also moved into the half space to form a back three at the base of the Leeds attacking structure. 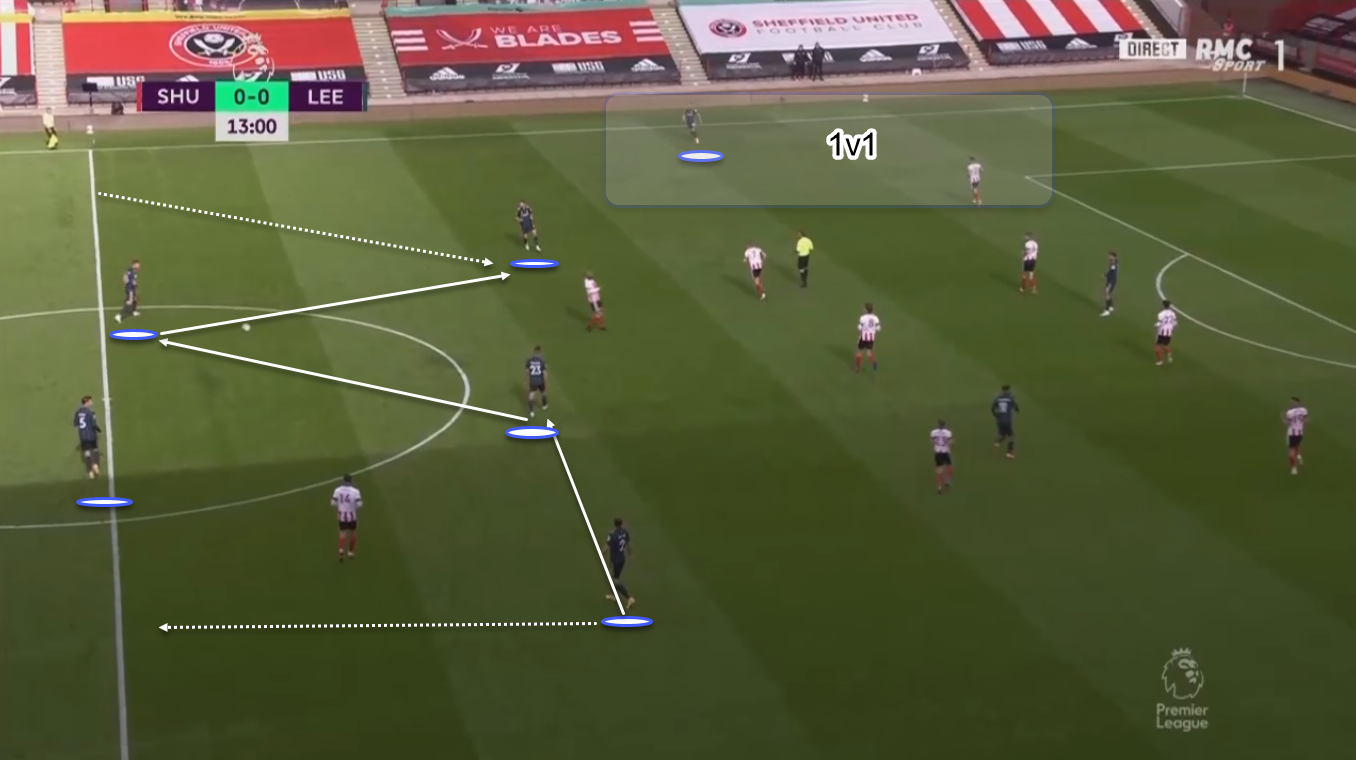 We see an example of this movement and how it aids the ball progression above. Leeds are building out and Sheffield United are not pressing aggressively and have adopted a low to medium block. This means that Leeds need to create a base from which they can attack into the final third.

The ball is initially with Ayling on the right and he passes the ball centrally before dropping back into a deeper position as a part of a back three. The ball is then rotated across and eventually finds Dallas who has made a movement from the left-hand side to occupy the half-space. This movement means that the ball can be effectively played around the midfield line of the defensive block and Leeds are able to progress the ball cleanly into the final third. There is also, however, another consequence of the movement into central positions from Dallas as Jack Harrison, the left-winger, was left isolated 1v1 in the wide space. 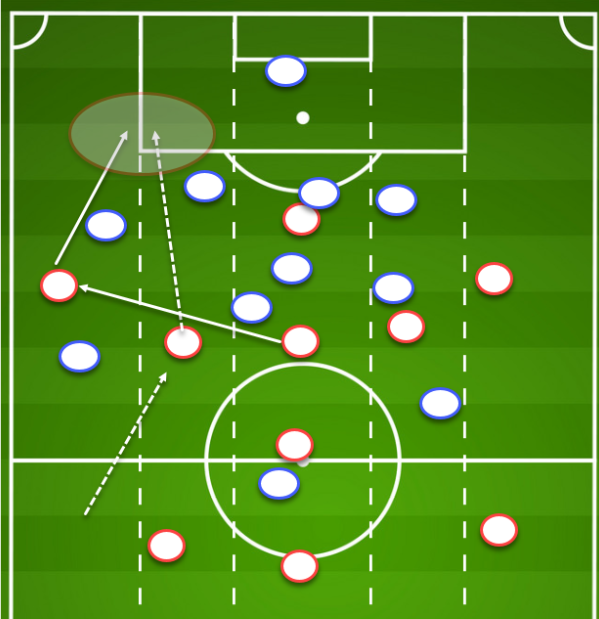 Finally we will consider the attacking potential that fullbacks can offer when moving through the half-space and breaking through the opposition defensive line unexpectedly. The above image was taken from the match at the start of the 2019/20 season between Fulham and Arsenal in the Premier League. Under Mikel Arteta we have seen Arsenal implement several tactical concepts that he saw used when working as an assistant to Pep Guardiola and Manchester City. It should come as no surprise then that the use of inverted fullbacks has been one of these.

In this instance the fullback was actually used in the half-space as a vertical weapon to break through the centre of the opposition defensive line and to create chaos and uncertainty. 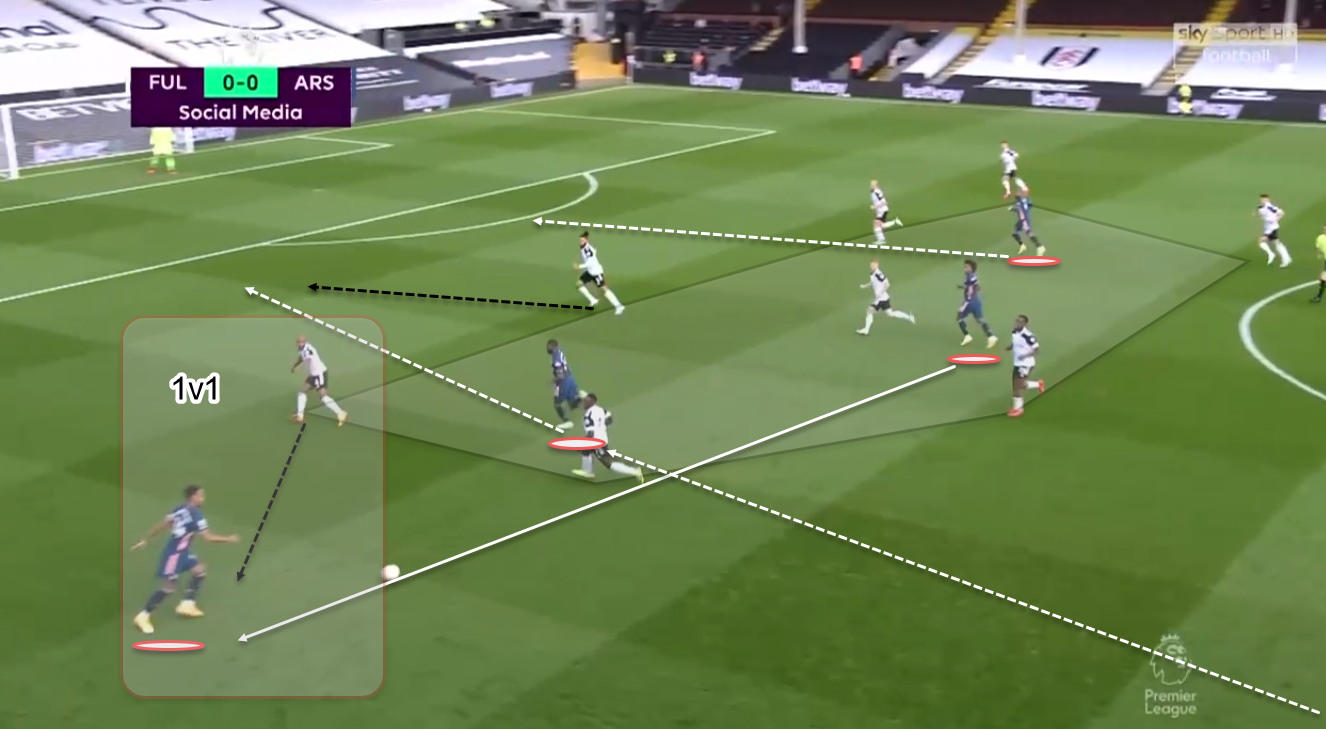 We see it in action here as William is initially in possession of the ball for Arsenal in central areas. Arsenal are attacking in transition and as such the Fulham defensive block is not set. The pass out to the wide position finds Pierre-Emerick Aubameyang and the Gabonese forward is initially in space as he receives the ball. There is an inverted run from Aisnley Maitland-Niles (AMN) from the left-back position and he makes a third man run that penetrates beyond the Fulham defensive line. This run gives Aubameyang an opportunity to isolate 1v1 against an opposition defender but it also drags one of the Fulham central defenders across and this creates space for Alexandre Lacazette to attack diagonally into the opposition penalty area.

There is no mistake in that the examples used have all come from coaches with a similar view on controlling the match in the modern game. Pep Guardiola, Jurgen Klopp, Marcelo Bielsa and Mikel Arteta are all deep thinkers who understand how to use space on the pitch to their advantage. There are, of course, other examples of coaches who are looking to emulate this use of inverted wingbacks but none of these quite get the execution right.