The French first division, Ligue 1, is a top league within world football, mostly featuring stars of the future in the early stages of their development, ready to take the world by storm. While these diamonds in the rough continue to grow and draw attention from the eyes of viewers, older and more experienced players have travelled around the football sphere.

Take Téji Savanier as a case in point. The 29-year-old central midfielder has circled the French football circuit, playing with Nîmes in both Ligue 1 and Ligue 2 from 2015 to 2019 before joining Montpellier located in the south of France. At his current club, Savanier has been moved around positionally, starting as a deep central midfielder in a midfield two and now playing as a number 10 at centre stage, conducting the creative orchestra in the attack.

Téji Savanier’s technical quality has been on display within French football for quite a while, regardless of him playing in mid-table and not playing for the likes of PSG or other European giants Manchester City and Real Madrid, but his name may come into question or not even be considered when discussing the top midfield talents within the France. This tactical analysis and scout report and scout report will delve into Téji Savanier’s main qualities that he showcases weekly.

The main attribute that allows Téji Savanier to excel within this Montpellier team tactics is his ability to take the ball past opposing players. Savanier can do this by combining quick touches of the ball and immense body orientation which allows him to swiftly change direction and catch the opponents off-guard. What also grants Savanier the extra edge when attempting to dribble past a player 1v1 is his capability to utilise different skills when appropriate as he can move, push, and drag the ball in congested areas when lacking support from teammates.

Savanier’s ability to escape pressure unscathed aids Montpellier’s ball progression and proficiency to retain the ball. Overall, Montpellier lacks the quality to take initiative and control the game, with them averaging 50.0% possession, ranking 10th in the league. Possession is not quintessential but important to a certain degree to create passages and to reach the overall goal: scoring. Obtaining a player like Téji Savanier that can slalom through a pack of players and beat the press while carrying the ball vertically into the final third demonstrates how much of a major asset the Frenchman is to his team.

Here is a perfect depiction of Téji Savanier’s ball manipulation in action vs FC Lorient. Savanier receives the ball to feet at the touchline located to the left of the pitch. As soon as the midfielder takes his first touch out of his feet, three Lorient players turn their attention towards him as he is now the ball carrier. In this situation, Savanier can skip past the two defenders in front of him and exit into the space represented by the orange arrow. 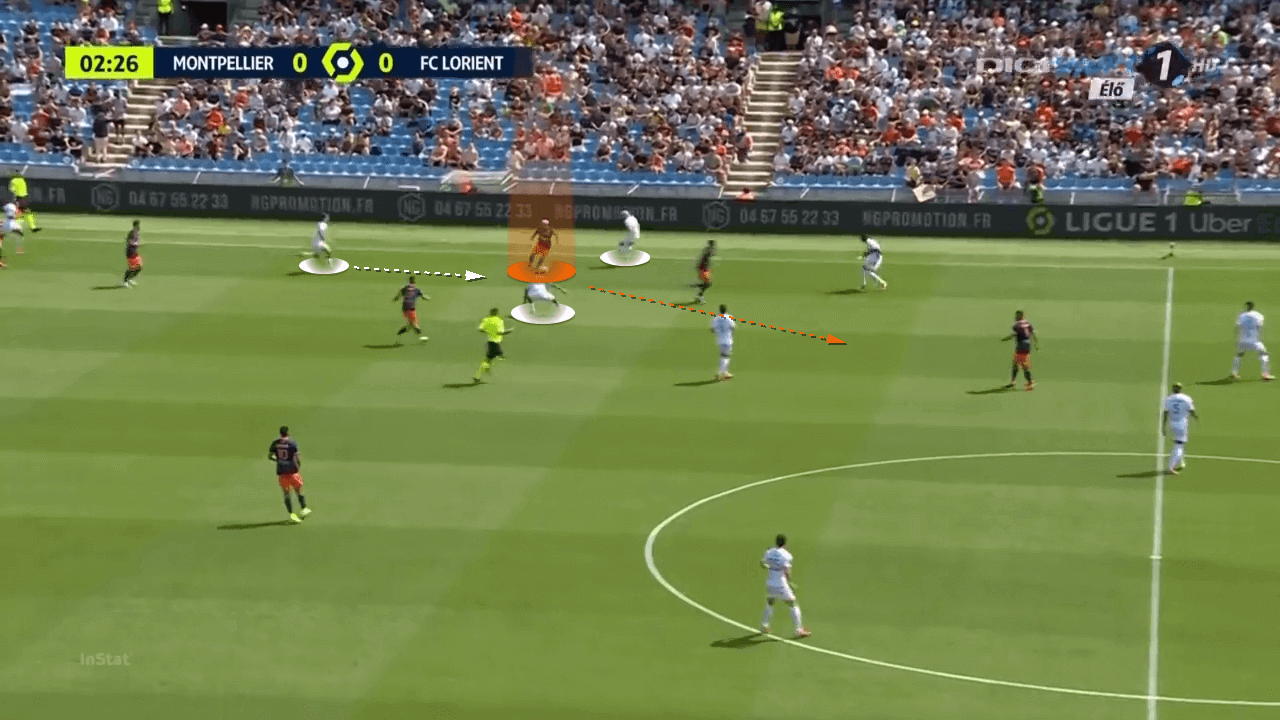 Another similar sequence arose when Savanier was again surrounded by three Lorient players upon receiving the ball. The Montpellier midfielder’s mind is quick and astute. He was able to take full advantage and play through pressure. 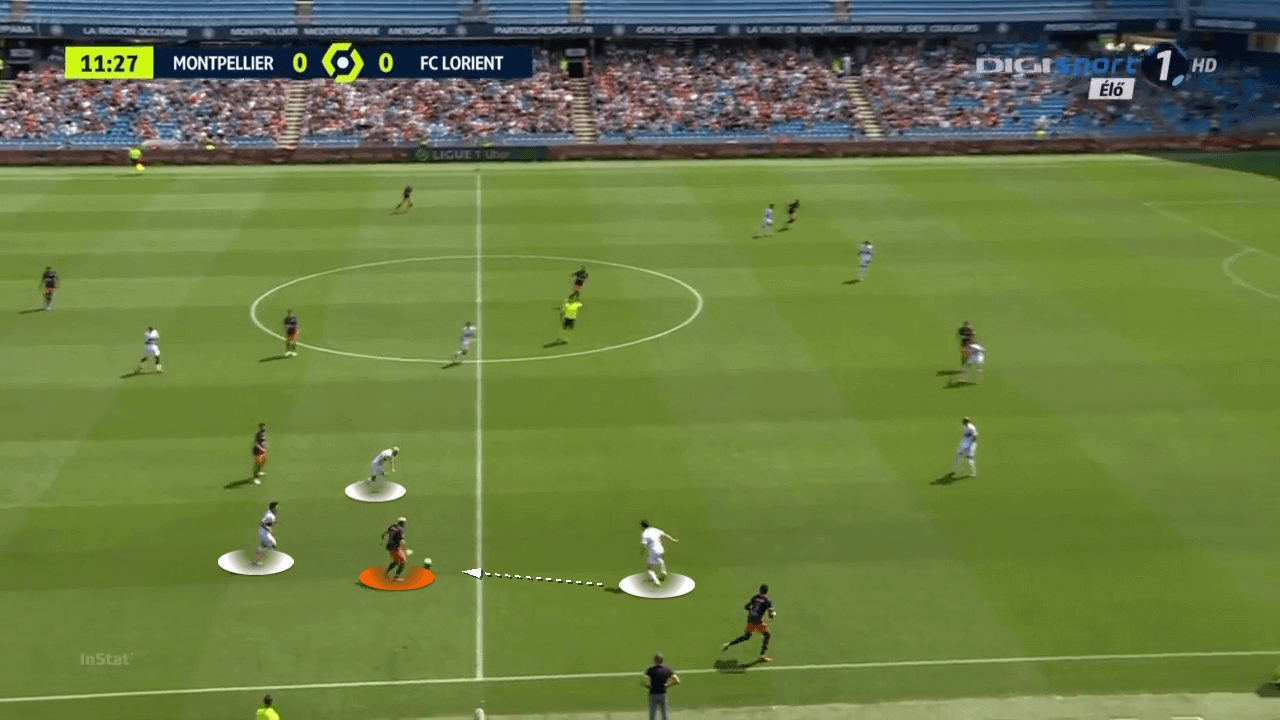 As Savanier begins to run forward, a defender closes the space between them and applies pressure. Within such a condensed space, Téji Savanier can chop the ball around the defender and grant himself space to find a pass out wide.

Range of pass and Spatial Positioning

As mentioned prior, Téji Savanier is adept at beating the press through his dribbling prowess and technical skill. Simultaneously, Savanier uses nearby space to give himself time which allows him to process and as a result, make the best possible decision regarding his next action.

Téji Savanier possesses the ability to read space which guides his sense of positioning and the optimal places to receive the ball and during these actions he exhibits excellent receiving skills. When Montpelier have possession but Savanier is not the player with the ball at his feet, he is prone to dropping deep into spaces located in-between the defensive line and midfield line to assist build-up play and as he moves into these regions, he begins to scan and look over his shoulders for possible pressure.

Savanier has an instinct when receiving the ball, to face the opposition goal to move the ball forward. Additionally, Savanier displays variations within his receiving irrespective of whether he’s located in tight, closed spaces or with room to roam. He can take the ball down with his chest, knee, instep, and left foot as well as the right.

As well as variations regarding his receiving, Téji Savanier can deliver different types of passes as he can pass the ball at long distances and play as a makeshift quarterback while also being capable of interplay with teammates as he possesses quality bounce passing which allows him to pass and move into space.

Here illustrates a perfect example of Téji Savanier’s expansive passing range. The Frenchman is positioned on the right-wing within the middle third of the pitch. With his incredible understanding of space and the positioning of his teammates, he manages to find a man on the opposite flank who is making a wonderful blind-side run and deliver a half-volley cross-field ball which allows the player to keep in stride and run through on-goal. 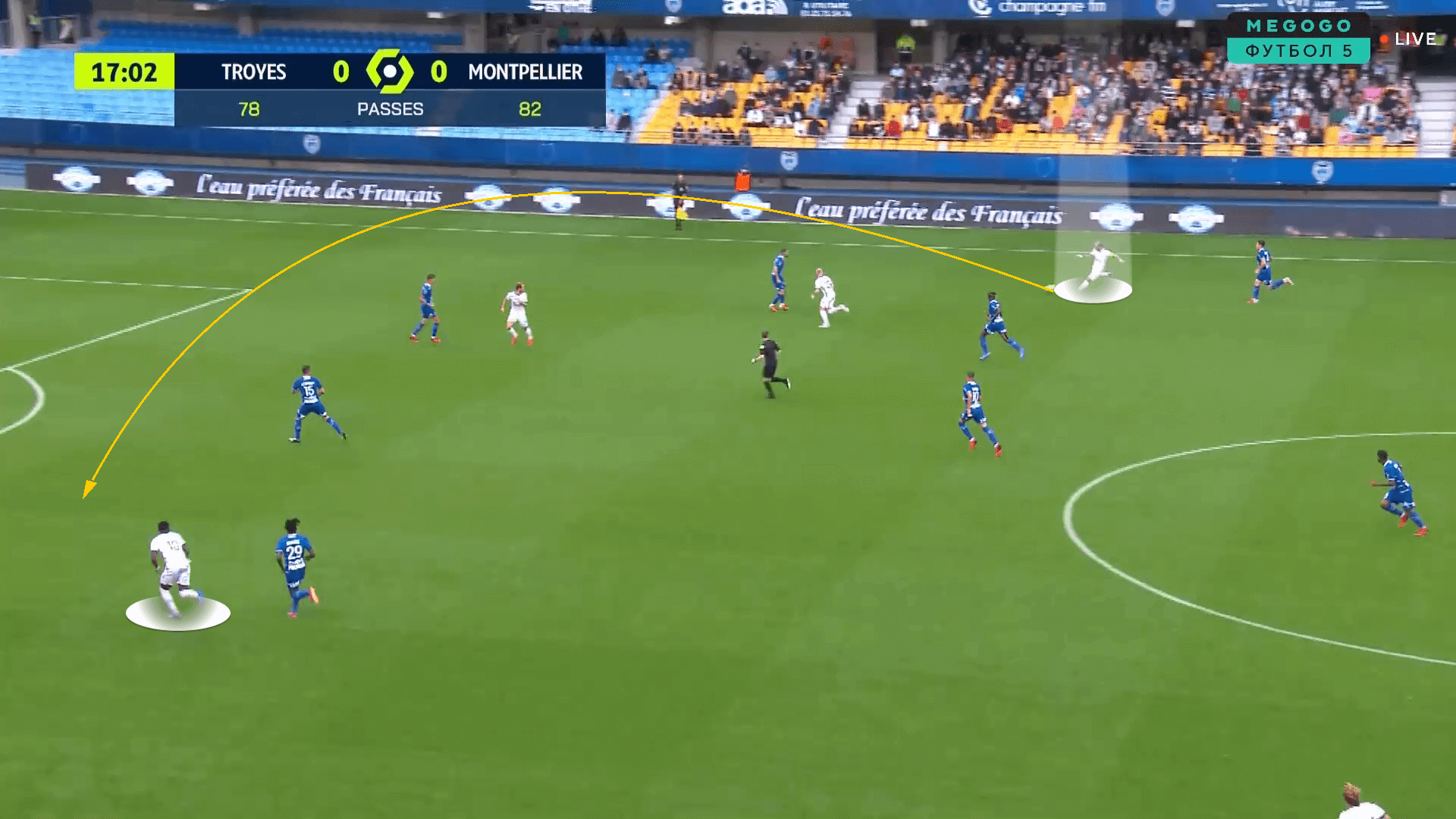 Téji Savanier is a forward-thinking player; not to say that he cannot contribute to slow and calm football but by nature, he is an accelerator who quickens tempo in Montpelier’s play. This thrust can be seen through his rate of progressive passing as Téji Savanier is excellent at finding teammates in-between the lines in open spaces.

Here, Savanier has dropped deep to facilitate play and move the play forward. As he picks up the ball, he notices his number 12, Jordan Ferri, in-between opposition lines in clear space. Savanier can generate perfect weight on the pass which meets Jordan Ferri perfectly in the middle as the pass matches his run. 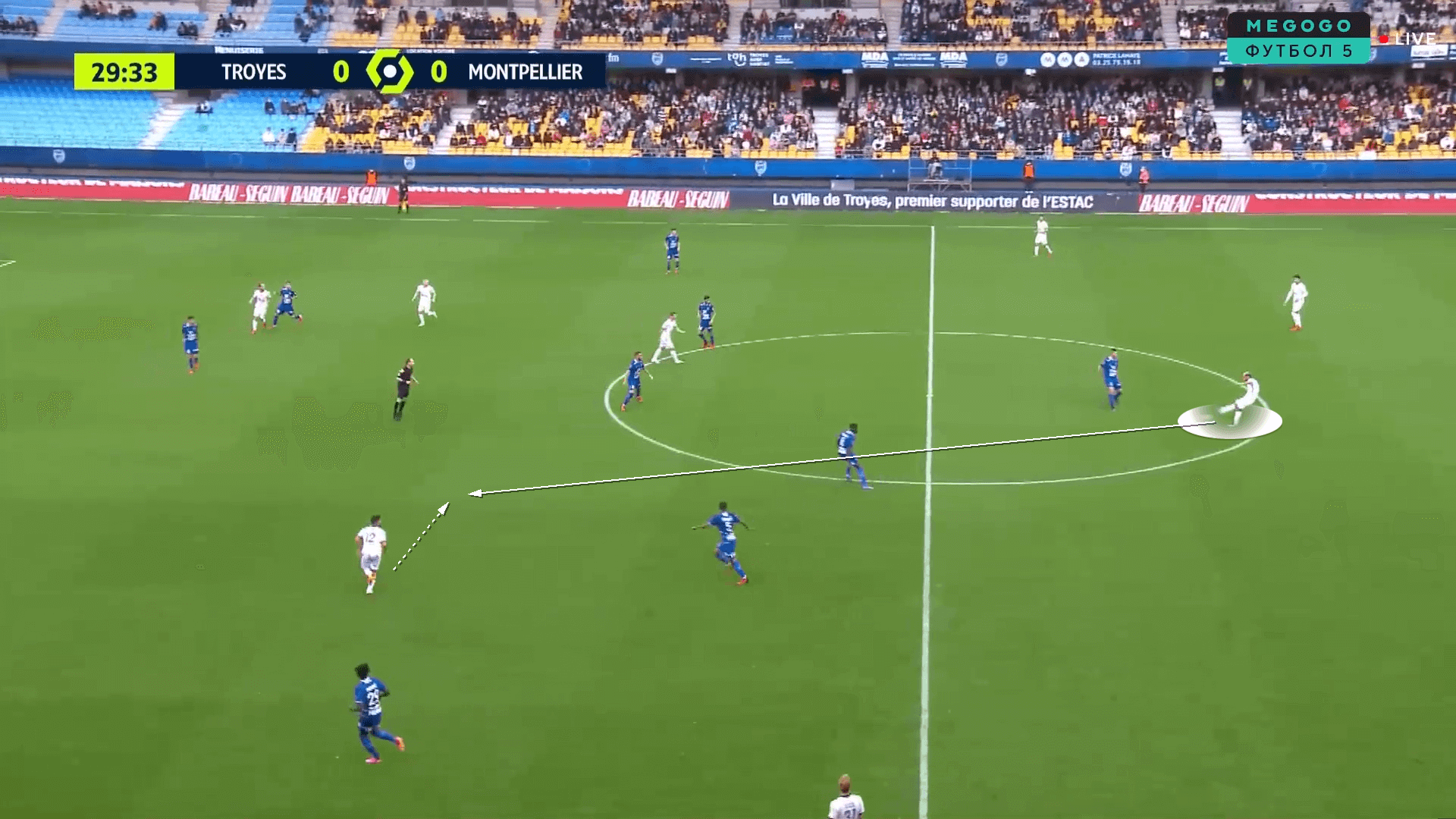 Another element of his forward-thinking nature is his shot creation within the final third. His speciality is crossing from an array of different locations and angles. Below, we can see a set-piece situation where Montpellier have decided to play the corner short. The ball eventually finds Savanier in the right half-space. He then directs a perfect cross with the outside of his boot, showcasing his versatility when utilising techniques when appropriate and the ball eventually lands perfectly in the path of a teammate.

What makes this sequence even more impressive is that Savanier was able to cross a superb ball with the correct arc while being pressed by oncoming opponents. Another notable point that should be raised is Téji Savanier’s body control within this picture. He maintains a straight back and is not leaning over the ball, which would not allow him to get the correct bend on the ball. 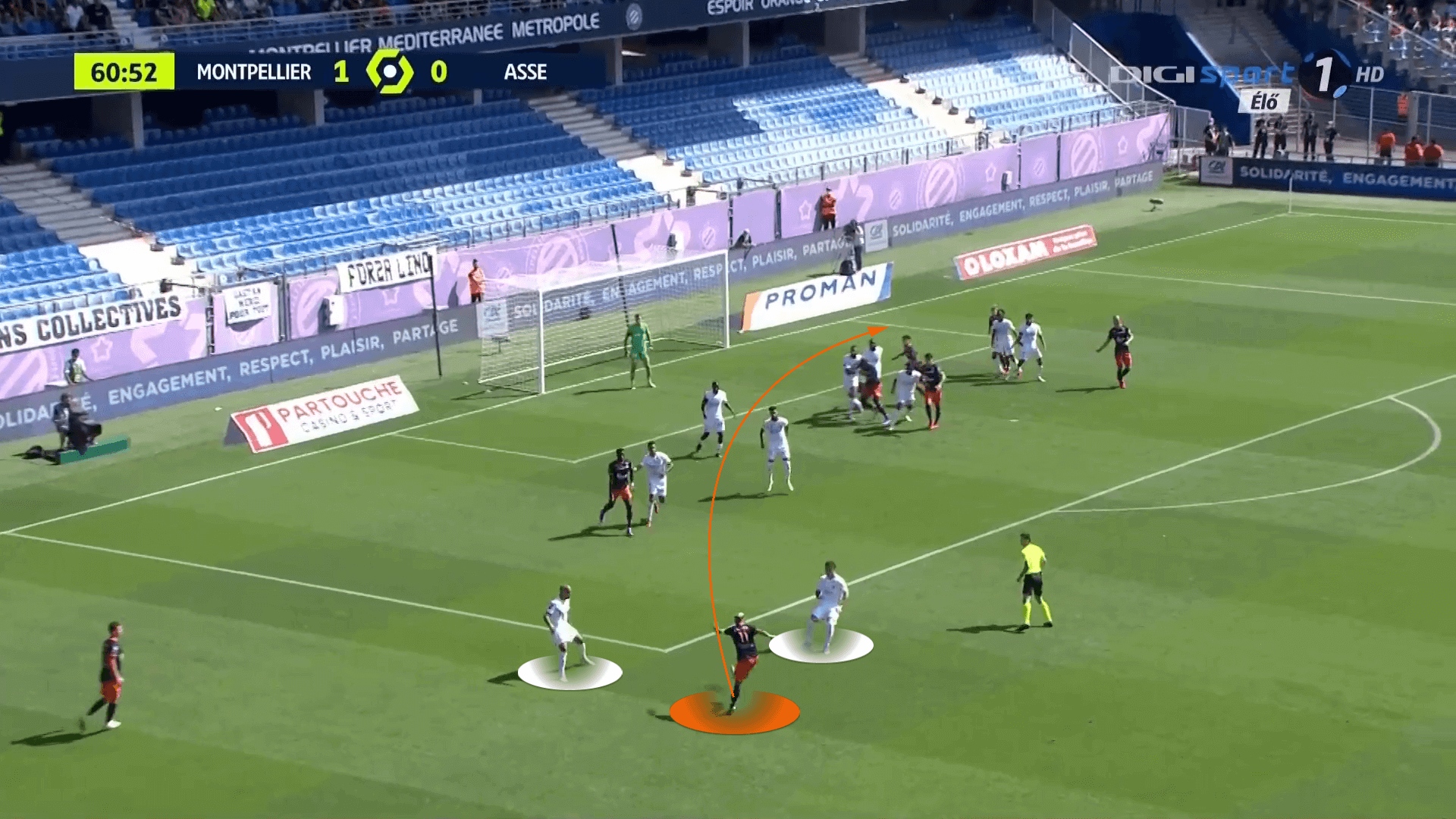 It is clear to see that Téji Savanier is the heartbeat of his team, whether it is dictating play from deep positions or being the creative fulcrum within the final third. Saying this, he is not just limited to his attacking qualities, as Savanier can produce defensive actions when Montpellier are out of possession.

An interesting finding when observing Savanier’s defensive actions is where they are located. The heat underneath shows the areas Savanier likes to do most of his defensive work. It is clear to see that marauder when trying to retrieve the ball but has a fondness for the right-hand side within the middle-third. 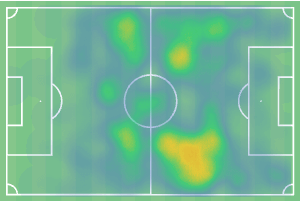 Against Lille, Savanier recognises a good time to press as two Montpellier players are positioned in-between the Lille midfielders, which limits the passing options of the player in possession. 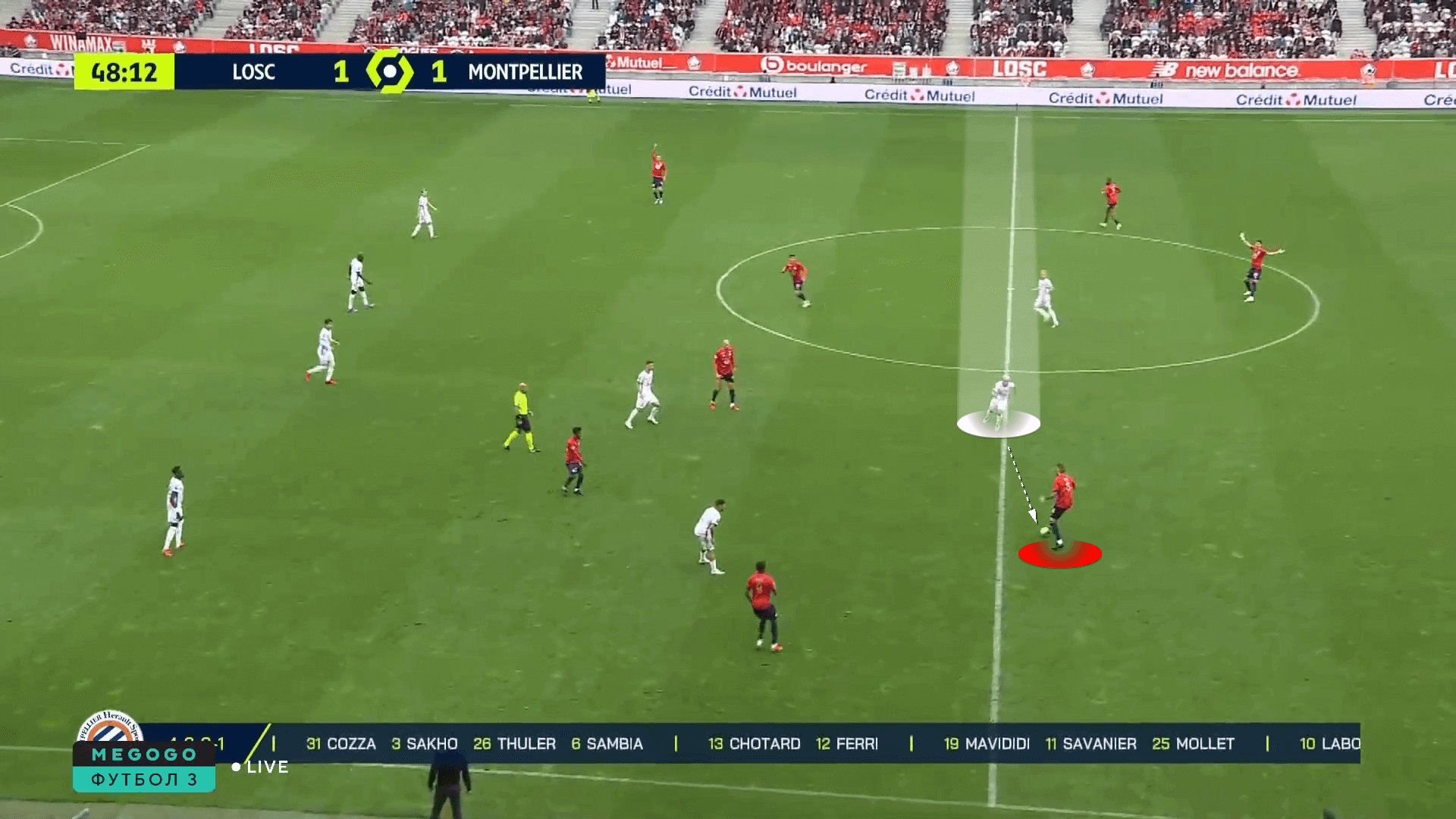 Savanier can snap into a tackle and steal the ball and lead a counterattack forward. 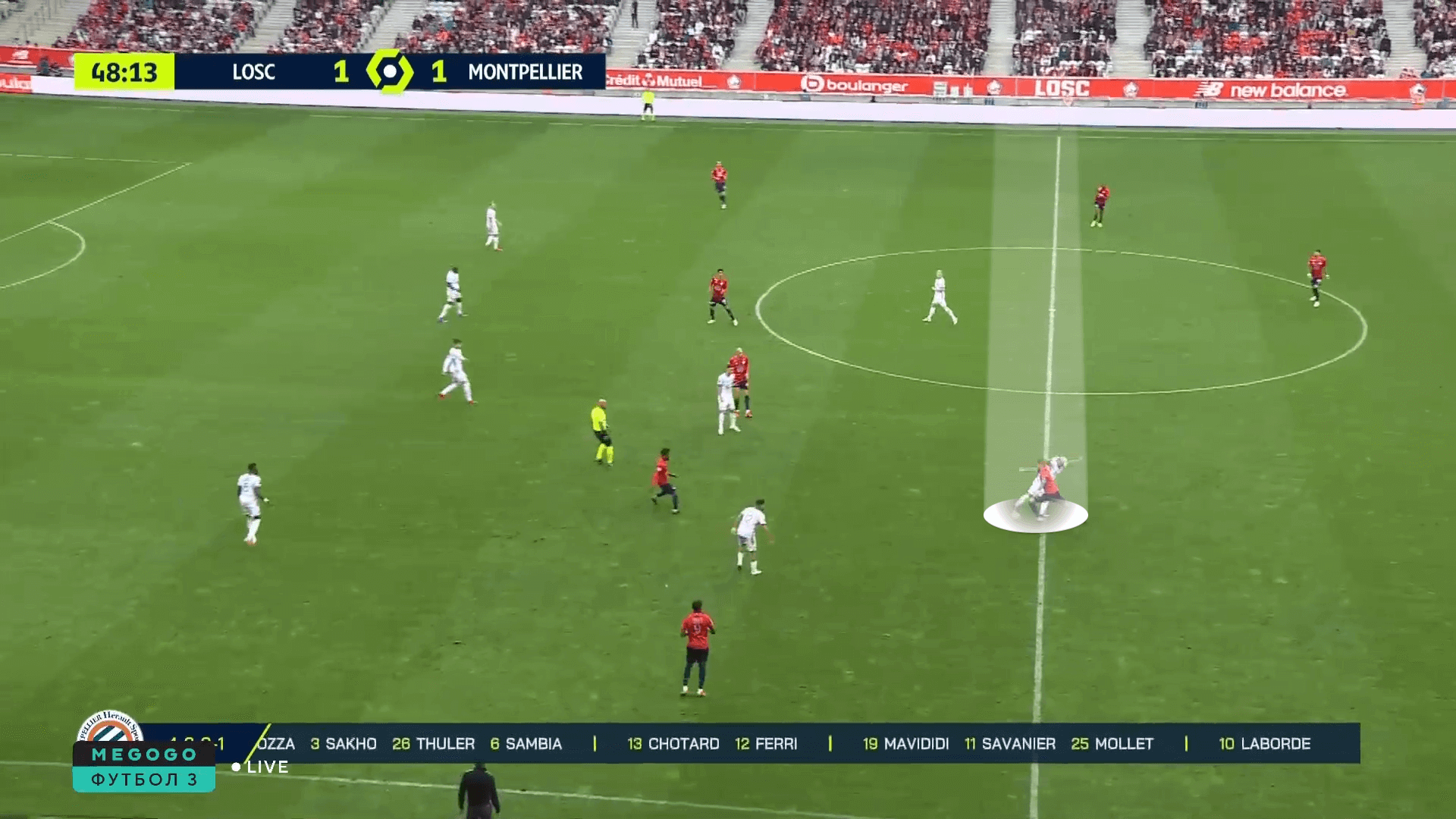 With a league full of the stars of tomorrow, a player of yesteryear is shining at the forefront of French football. Téji Savanier has collated a footballing body of work that spans over several years and within both Ligue 1 and Ligue 2. Savanier’s combination of attributes is what makes him such an interesting player. He is tenacious without the ball and immensely clever on it, as he possesses great control of his body which allows him to beat defenders, ability to pass and receive in multiple ways and he eases Montpellier’s ambition of moving the ball through the thirds with his reading of space when picking up the ball. Savanier’s game is multi-faceted and is the force behind the teams he has been a part of and regardless of the number of trophies he has won being quite low, his legacy in France should be considered at an all-time high.