Victory in a football match depends 50% on luck and 50% on the skills of the coaches and players. The aim of every team is to increase the influence of skills and to reduce the influence of luck. There are a lot of usual movements and rules on how to play, but it is also true that if you play in a conventional way, your opponent will be able to predict your game structure. “Thereare a lot of usual tactical movements. If you want to notice something new, you just need to look for a deviation”, said Rene Maric, the head coach of Borussia Monchengladbach who is also renowned as a tactical innovator. This is true, because, for example, if a team plays in a standard 4-3-3 system, it will be set up in a 4-4-2 in the defensive phase and something like a 3-4-3 in the attacking phase. The aim of this analysis is to give you some thoughts about how to increase the effectiveness of the 5-3-2 basic scheme in defence and attack. Let’s look at our tactical analysis.

There are a few typical attributes that coaches usually look for in footballers when intending to set their sides up in such a system:

● three tall central defenders with good ball-playing ability to progress the ball through the defensive movement of the opponent and break high pressing traps or defensive zonal structures;
● two fast wing-backs to support the attack and also drop into the defensive five-man line when needed;
● a couple of forwards, it can be two tall and powerful centre-forwards or one powerful forward and one small creative player. The midfielders are ideally blessed with great technical skill and the ability to make progressive runs to support the attack;
● The three central midfield players are quite important, as they will have to cover a lot of ground and will be key during all phases of play

It is no secret that the 4-3-3 and 3-4-3 basic schemes are used a lot. Also, it&#39;s very important to remember that the game has different phases and there is no one constant scheme throughout the entire game. 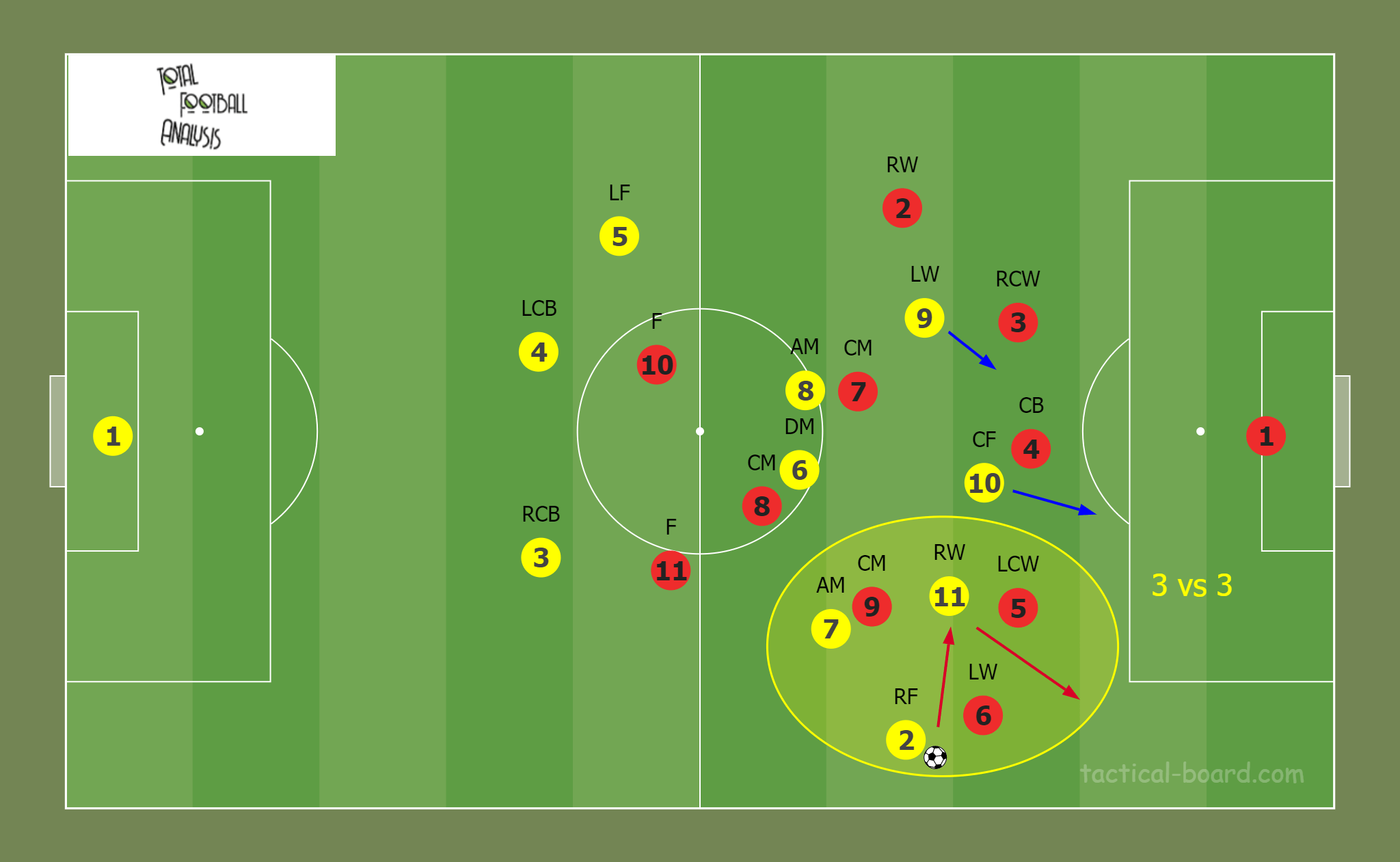 Let’s look at how it can be useful to change the usual mindset of using three tall and not very fast central defenders. What do we know about wingers? Usually, they are fast technical players who either make inverted movements into the centre or go to the flank and cross. Against teams which are playing with a back four, there is always the chance of being outnumbered on the flank, and so the wide central defender usually will have to go out to help the full-back in that area.

Only powerful and wealthy clubs have an opportunity to buy high-class central defenders. Center-backs at that level are able to compete with fast opponents using their speed and intelligence. But if teams do not have such players in their squad, only tactical changes can help you to win. The main idea is to try and balance out skills as much as possible . You have to potentially try and improve your defenders in terms of their mental attributes, to deal with such situations.

However, every coach can also choose and add players with special qualities to their lineups. Thus, why can’t a team set up with four wing-backs on the pitch in such a situation? They usually have good speed and stamina and are able to cope well in their individual duels. This will mean that the opponent’s wingers and full-backs (let’s imagine a 5-3-2 vs a 4-3-3 in the attacking phase of the 4-3-3) will play against at least two fast players. When we use tall central defenders in the 5-3-2 scheme, there will is an advantage for the opponent in that area, because he has two fast footballers against one fast and one slow footballer. When we use two wing-backs, there will be no such strong advantage on the flank. This idea can lead to these situations:

– when the opponent attacks down the flank, there will be 2vs2 isolation, where you have two fast players; so, it’s harder to use dribbling and fast movements to create something dangerous;
– the team will be able to set into their rest defence quicker, and will also be able to recover quickly in transition;
– the build-up phase becomes quite interesting as well, as we will see next

Let’s look at this theory through the RB Leipzig vs Istanbul Basaksehir game in the UEFA Champions League recently. Julian Nagelsmann used a similar structure, with wing-backs in the back three. There is one difference between these two ways of using wing-backs in the defensive line. RB Leipzig’s coach added one wing-back to the centre, while our idea is to use two. Also, we shouldn’t forget that this idea is mostly suitable for teams playing against stronger opponents with fast attackers. Let’s imagine that Willi Orban is the right wing-back and continue our analysis. The main aim is to show how this idea will work in real game situations. 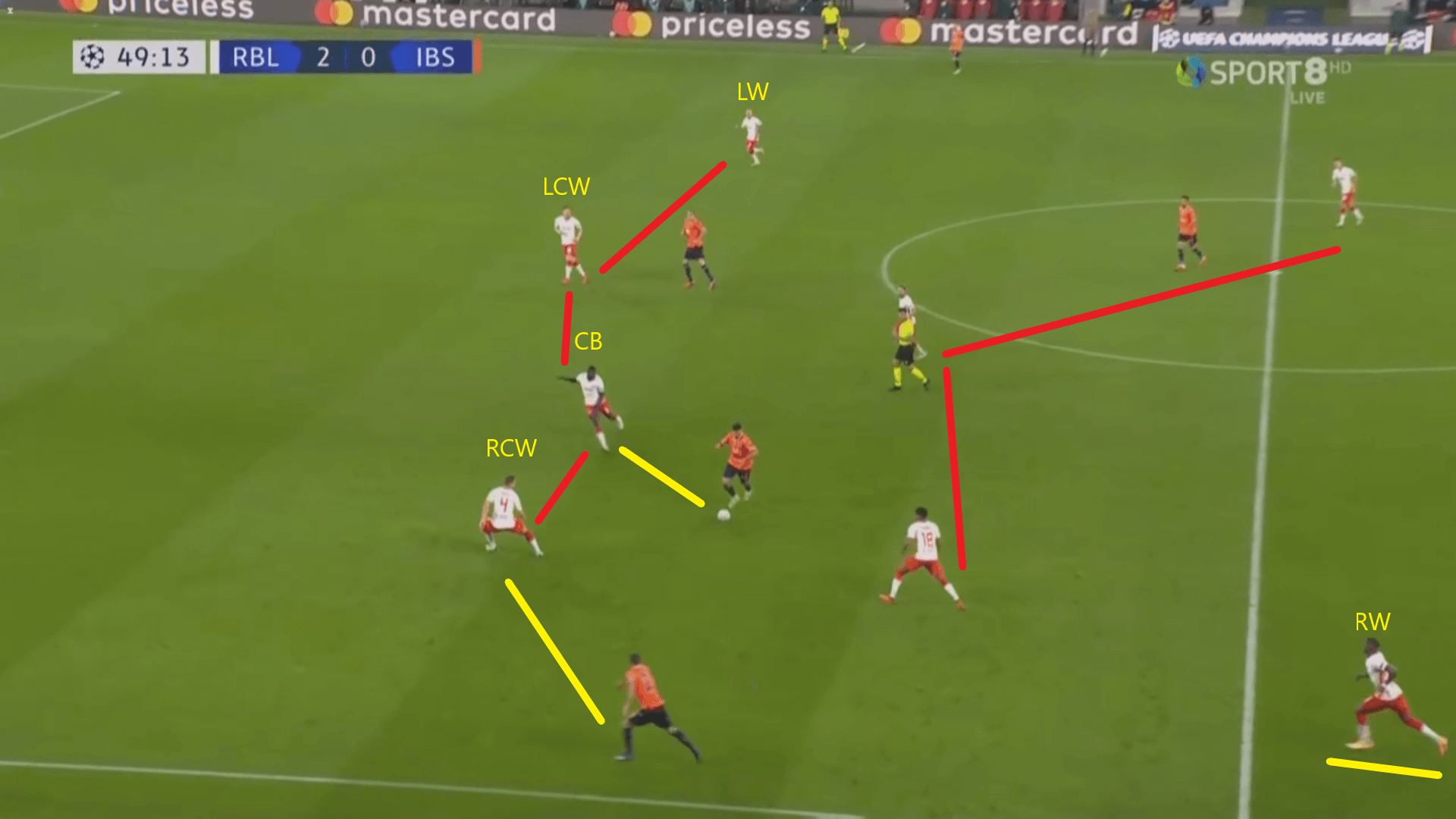 Are there some disadvantages of using this idea? Yes, of course, if used without a good analysis of the squad and its attributes. For example, there could be hesitation at set-pieces. How will the defense be organized? What about physical and height differences? As we know, a lot of wing-backs are not very tall. Such problems can be solved by adding two tall defensive midfielders or two tall forwards. Each situation requires a particular solution. 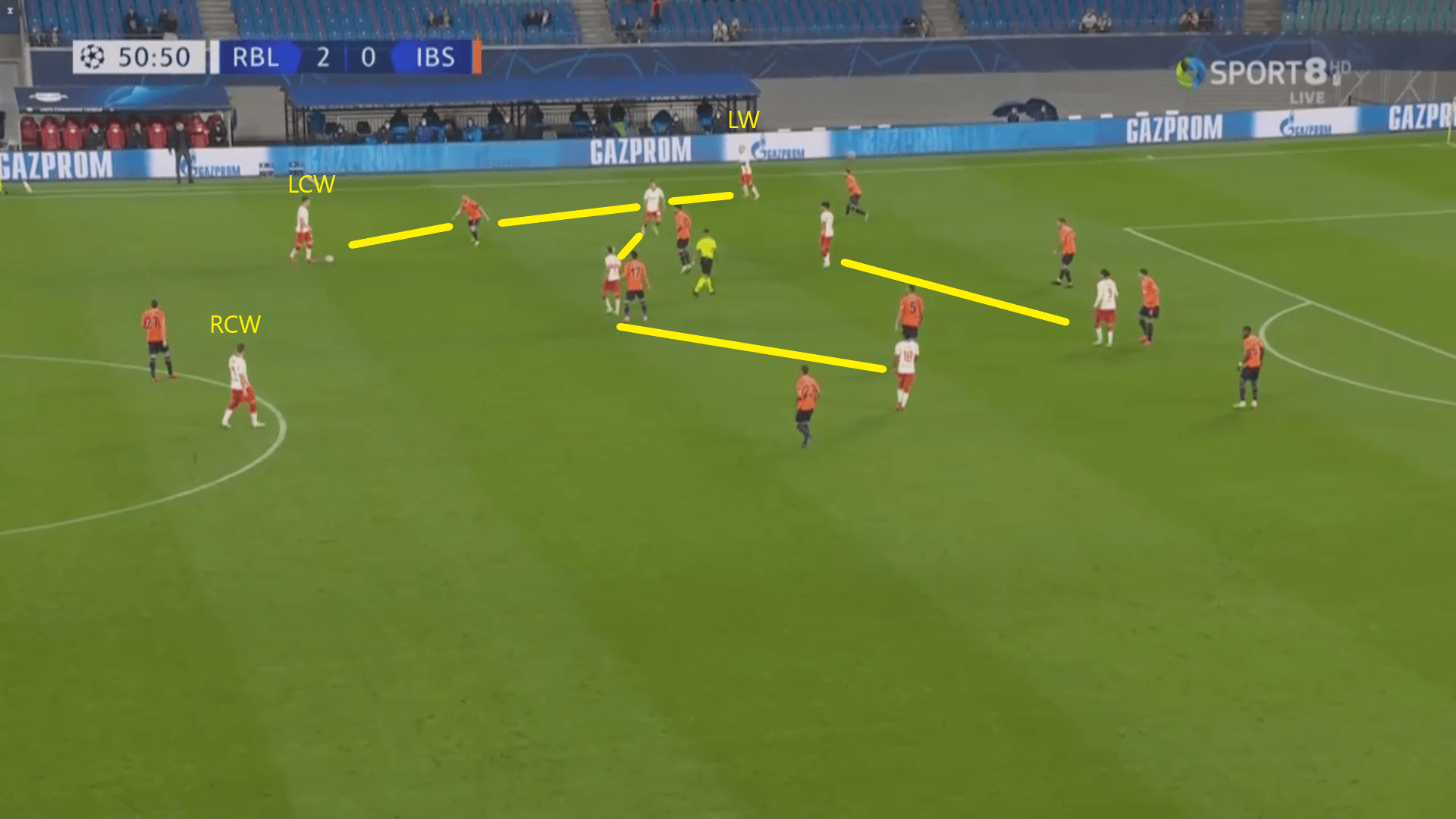 Let’s imagine the team as having a 5-3-2 structure during the build-up. As usual, the wing-backs go wider, to make the space bigger and attract opponents, away from the centre-backs. It is interesting that sometimes the left or right central defenders go forward through the defensive structure of the opponent. That will be another advantage of using wing-backs. Fast players with good dribbling skills can do progressive runs better than tall centre-backs. 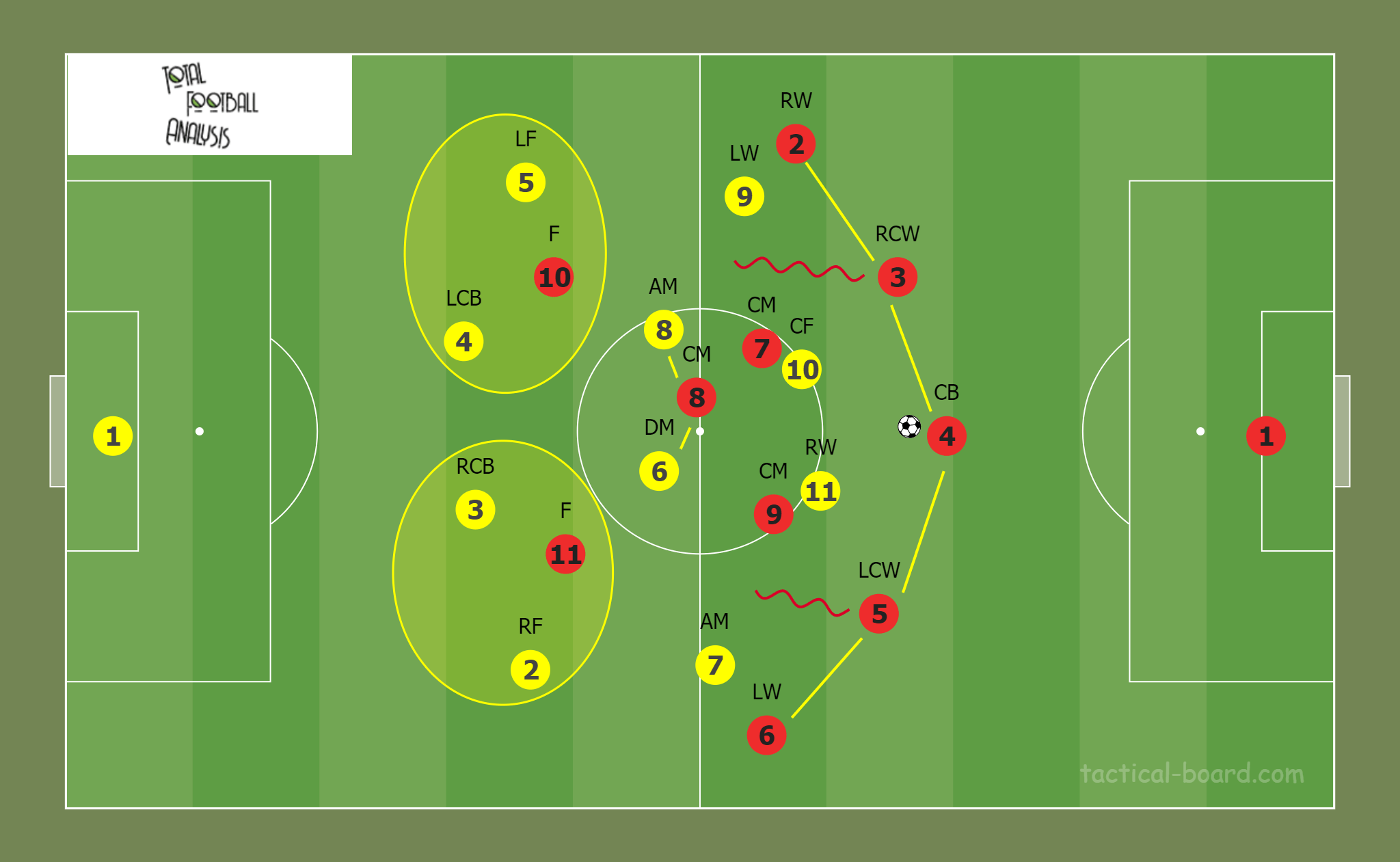 The situation that the picture shows is simple enough. Two forwards are forcing four defenders to stay narrow. Both wingers are closing the left wing-back and right wing-back. The attacking midfielder and defensive midfielder are standing in the centre to close activity. Also, there are two players trying to break the build-up. The two forwards are creating a great advantage, converting the situation into an 8vs6 on the other side. So, we can use the best quality of our central wing-backs. 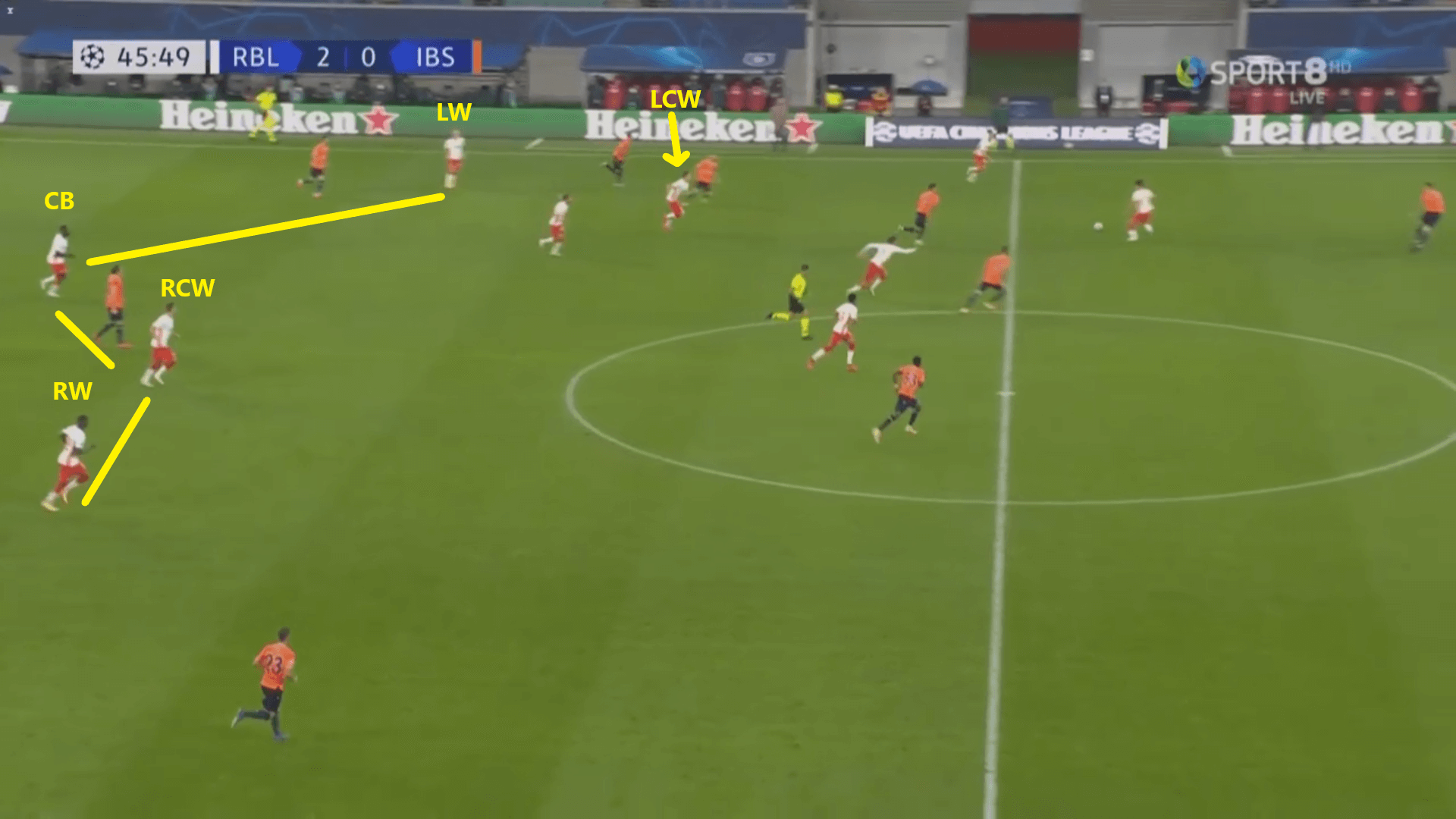 The other point to analyze is the defensive line structure when the central wing-backs will go forward to support their team’s attack. The defensive line has an opportunity to turn into a four- man line in order to prevent problems arising from the opponent’s counter-attacks. 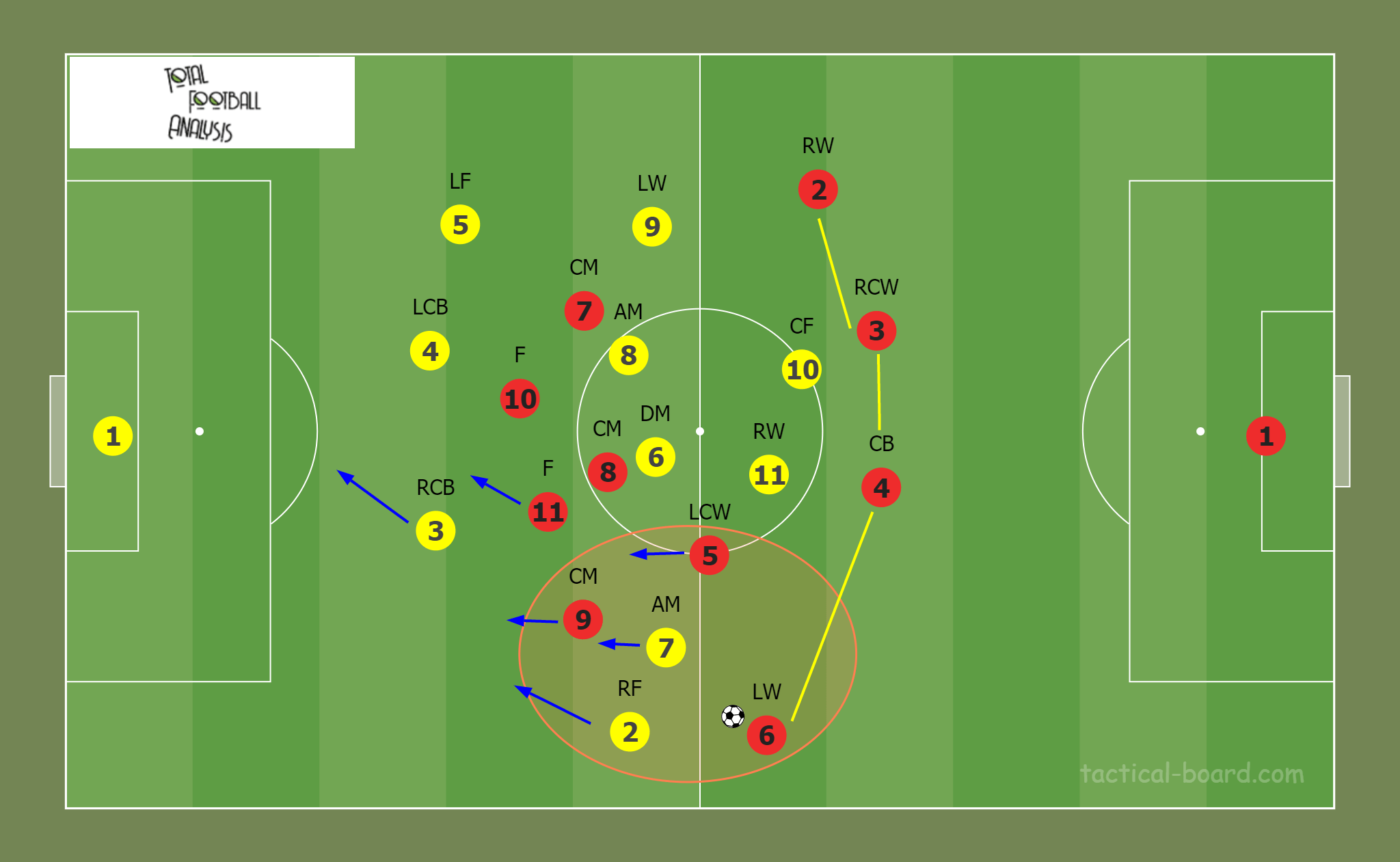 The last thing to focus on is returning to the scheme. As was said earlier, central wing-backs will run faster than tall central defenders. It’s not a secret that when you play at a high level, a few seconds or only one moment can be decisive, and thus this will help the team return to their shape much quicker during transitions.

To conclude, it’s necessary to say that different teams have different squads. That’s why every coach should make a decision independently. The idea of this analysis is to give every coach or analyst thoughts about how to increase the power of the five-man defensive line, especially when the opponent has high-class wingers and full-backs. 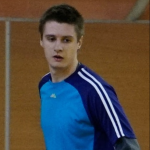