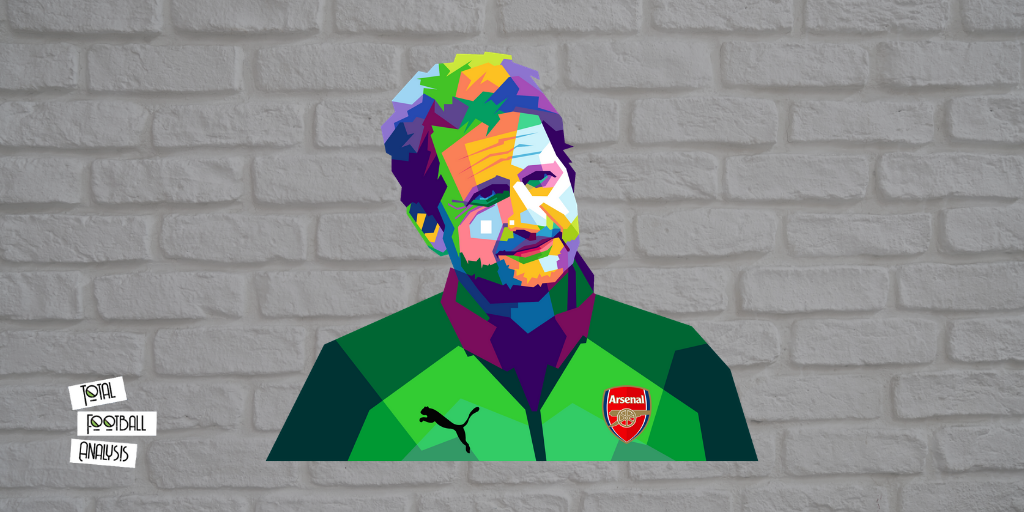 The growth of the women’s game in recent years has been meteoric. Helped by the positive performances of the England national team in international competitions we have seen support and sponsorship increase year on year as the FA women’s super league has gone from strength to strength. While the likes of Wolfsburg and Lyon continue to dominate at European level we have seen the likes of Chelsea and Liverpool in particular impress over recent seasons. Arguably, however, the most exciting team in England at the moment are Arsenal. Coached by the Australian-born Joe Montemurro the North London side play an exciting brand of attacking football with definite shades of Spanish and Dutch models shining through. This has led to us, at Total Football Analysis, identifying Joe Montemurro as one of the coaches to watch as we enter 2020.

Born in Australia Montemurro played professionally in Europe with Potenza and Treviso in Italy but he never progressed beyond the lower reaches of the Italian game. As a coach, Montemurro has spent the majority of his career with various clubs in his native Australia but he also attended the famous Coverciano coaching academy in Italy. There he graduated with the likes of Gennaro Gattuso and Simone Inzaghi. Whilst there Montemurro completed a dissertation questioning whether you had to have played the game at a high level to become a top coach. He concluded that a top-level playing career was not essential and since then he has gone a long way to proving this conclusion.

Montemurro’s coaching career in Australia culminated in the coaching role at Melbourne City, part of the City Group, there he won the league title while going the entire season unbeaten and we began to see elements of positional play in his game model.

When Arsenal were looking for a new coach in November 2017 they turned to the Australian to implement his style of play at the club. Since then they have barely looked back. Montemurro favours a pressing style when out of possession and uses overloads and isolation along with vertical combination play to overwhelm the opposition defensive block. Indeed, there are similarities between the game model used by Montemurro at Arsenal to that used by Pep Guardiola at Manchester City in the men’s game.

As ever we will consider Montemurro through a tactical lense as we look to show why we think he is one of our coaches to watch in 2020. This tactical analysis will provide an insight into the coaches game model.

One of the most effective and simple concepts that we see from Arsenal under Montemurro is their method of overloading one side of the field to attract the opposition defensive block towards the ball before then switching quickly to the other side where they have a receiving player in space.

In this case, the receiving player tends to be the fullback on either side of the field as the wide forwards move inside to occupy either the half-space or even the central area. This creates space for the Arsenal fullbacks to move high into space that is often unoccupied. Montemurro tends to favour a 4-3-3 system with Arsenal and both wide forwards display a tendency to move inside to try to combine and interact with the lone striker. As these wide forwards move inside the opposition fullbacks will tend to follow them in and thus the defensive block of the opposition becomes more narrow and compact. If you were looking to play primarily centrally to force a breakthrough then this could be a problem but Arsenal deliberately forces this defensive action before then playing quickly to the wide areas and then looking to bypass the defensive block down the outside. 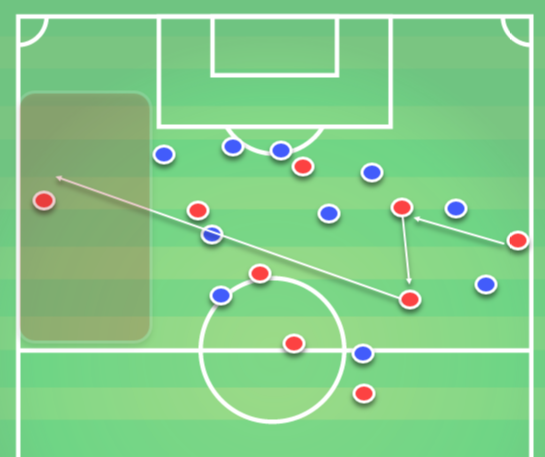 We see an example of this above as Arsenal (red) have possession against the opposition (blue) and the ball is originally out on the right-hand side of the pitch. The ball moves quickly from the right-back into the right-sided forward, who has occupied the half-space. The ball is then set back to a deeper midfielder who has space.

As you can see as soon as the deeper midfielder picks up possession there is space on the left side of the field that can be exploited by a quick diagonal pass. When this pass is played the receiving fullback is in space. There is only one opposition player. The fullback, who is positioned to make a challenge and to engage the ball. Even then though the Arsenal player is in a dangerous 1v1 position and can attack down the outside of the opposition defensive block. 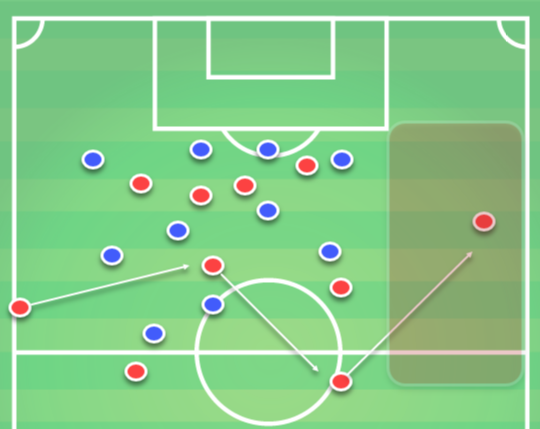 In the example above it is important to note that Arsenal are happy to commit three or four players on to the highest line in order to force the opposition back. As they do so they open up spaces elsewhere that can be exploited and used to attack the defensive block.

This time the ball moves effectively from one fullback to the other. The left-back starts the move and plays diagonally to the midfielder. This pass pulls the far side defenders even closer to the ball as they move to cover the centre of the field. The ball is then set back to the far side central defenders and he is able to play first time out to the right-hand side. Once again the player who receives the ball has space to advance into and he will attack the opposition defensive block down the outside.

As we have already seen Montemurro favours a system that sees the wide forward move towards the centre of the pitch. As we have discussed above these movements create space in the wide areas that can be used. There is also another implication in these kinds of movements as they allow Arsenal to combine in quick interplay in order to find a way through a compact defensive block of the opposition.

With the Dutch international pairing of Vivianne Miedema and Danielle van de Donk, in particular, these moments of rapid passing interplay are extremely effective at exploiting any spaces that have been left centrally by the opposition. 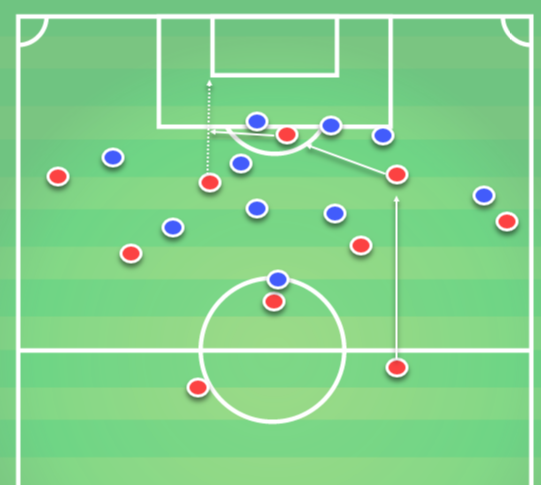 We have already seen above that Arsenal are not afraid to press more and more players onto the higher line and to combine this with movements from the fullbacks that see then move into advanced areas. This tends to lead to Arsenal having positional superiority over their opposition in the final third.

Under Montemurro Arsenal are comfortable playing out from their back either in the build-up phase or in more established phases of possession when they recycle the ball back to maintain possession and switch the angle of the attack. Here we see one such example with the ball coming back to the right-sided central defender who then looks to play a quick vertical pass into the feet of one of the forward players. As the ball travels forward it is then moved inside to the feet of the aforementioned Miedema. The Dutch international is exceptionally dangerous and it is not unusual to see at least two defensive players marking her tightly. She then immediately shifts the ball to the left side where her compatriot Van De Donk is moving from a deeper position. The midfielder takes possession in space in the penalty area and is able to strike on goal from a strong position. 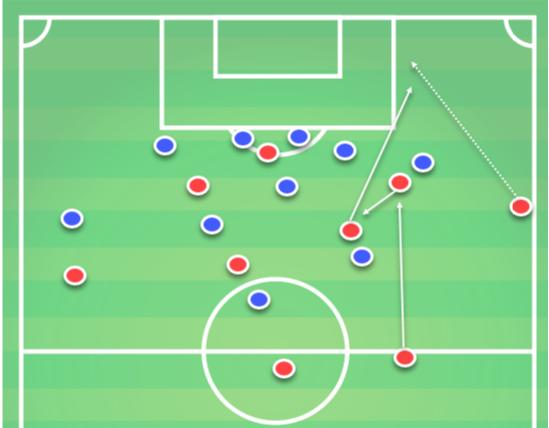 These moments of interplay are also used by Arsenal to create openings for the fullbacks who move into advanced areas of the pitch. We see one example of this above as the ball is again played vertically from the central defender into the feet of the right-sided attacker who has moved into the half-space. This time she shifts the ball back slightly into a deeper position before the ball is then played through the defensive line into the feet of the right-back who is moving higher and looking to get in behind the defensive line.

While the game model of Montemurro is perhaps most impressive in the attacking phase there are still elements out of possession that are very strong. First among those is the way that Arsenal press the ball when out of possession. 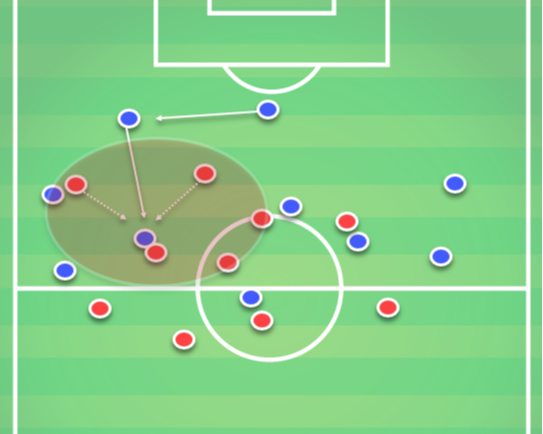 We see one such trigger here. It is interesting to note that when the opposition are looking to build out Arsenal tend to be positioned in close woman to woman coverage. There are few comfortable passing options available to the player in possession and in the end, the pass is played into the midfield despite the fact that the receiving player is closely covered. As soon as the player takes possession when facing her own goal there are two advanced Arsenal players who will collapse back onto the ball in order to try to force a turnover in possession. 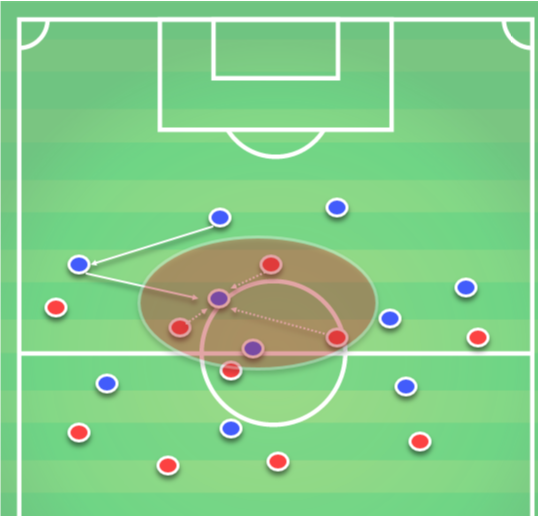 A similar situation here as the ball is circulated wide in the first instance and then back into the centre. As soon as the player in the centre receives the ball, and again she is facing towards her own goal, the press is triggered with three Arsenal player converging on the ball from different angles in order to force a turnover and win possession of the ball.

With the tactical side of the Women’s game constantly evolving and improving there is little doubt that Joe Montemurro is at the front of this drive. The Arsenal coach has, of course, displayed an interesting game model but that can only take you so far. His ideas still need to be transmitted to the players on the pitch who can then put into practice what they have learnt on the pitch.

There are some who feel like Montemurro may be the first coach from the women’s game to make the transition into top-flight men’s football but in a period when the Arsenal men’s team are struggling the performance of the women’s team is giving the Arsenal fans something at least that they can be proud of.