The Premier League top six have long been poaching stand-out performers from the rest of the league. It has been an effective hunting ground for them, as they can find players who are of proven quality, good potential, and capable of putting up the results consistently. Players like Sadio Mané, Georginio Wijnaldum, Matt Doherty, Harry Maguire, Ben Chilwell, Diogo Jota and many others have made the switch to the bigger clubs in the League.

The “smaller clubs” have to either give in to the demands of the players and the asking club, to liquidate an asset who may never arouse an equivalent high price, or hand the player an increased wage contract to keep him at the club. In mathematical terms, the selling club either makes a lot of money or loses it, as they get a huge windfall and get that player’s wages off the books (make a lot of money) or they keep him by giving him an increased wage contract (lose the windfall and pay more to keep the player). It could either be a masterstroke or a blunder when looking back to it in retrospect.

In this data analysis, we take a look at the players’ data and statistics who could earn a big-money move next summer. We will take a look at four positions in particular in our analysis – defenders, midfielders, wingers and strikers. 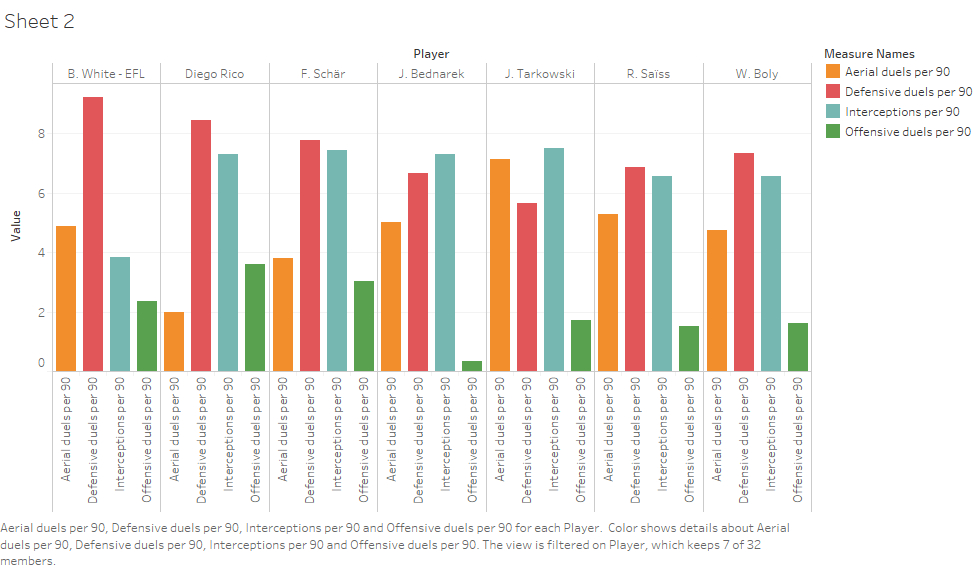 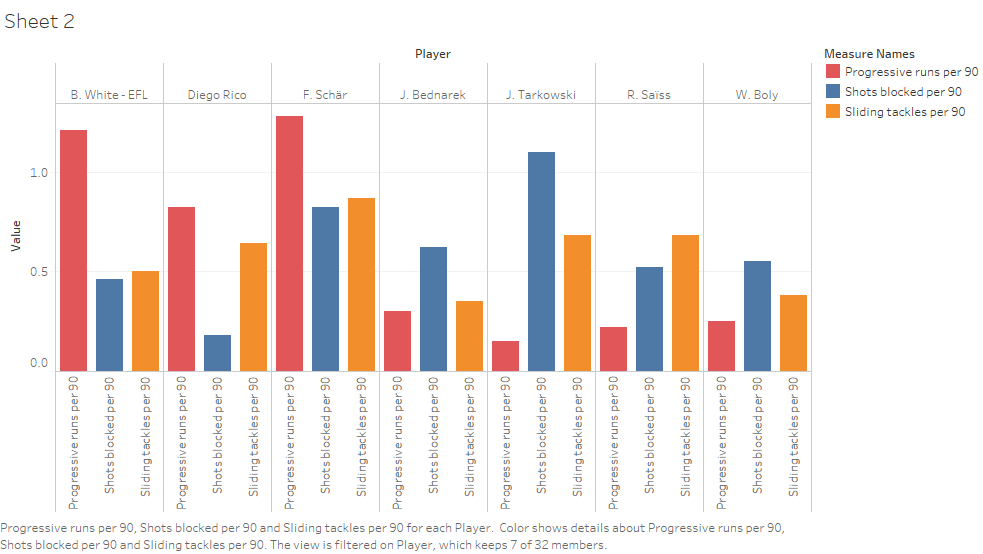 After a slow start to his senior career back in his homeland, he would have been surprised that he earned a move to Southampton in the Premier League, but it seems like the gamble that the club took, to invest in a young prospect and wait for him to fit the mould in the long run, paid off.

In a haphazard 19/20 season where Southampton were looking destined to go down to the Championship after the first half of the season, and when they started to pick up the pace, COVID-19 threw everything into the air. But still, the club managed to achieve a strong end to the campaign. 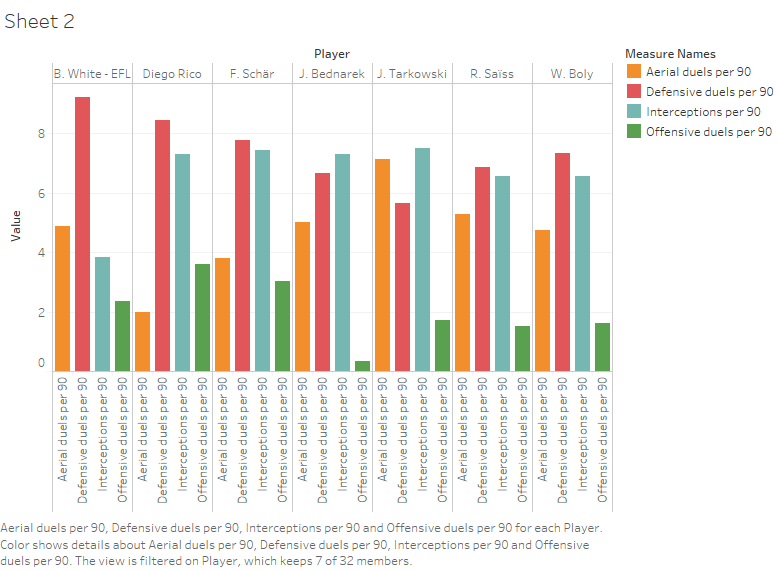 While much of the headlines would feature his teammate – Danny Ings – Bednarek was one of the most solid and consistent Saints players. He made 11.97 successful defensive actions in 19/20 and it looks like he is set to maintain that number, if not improve on it in 20/21 as he is currently producing 11.87. 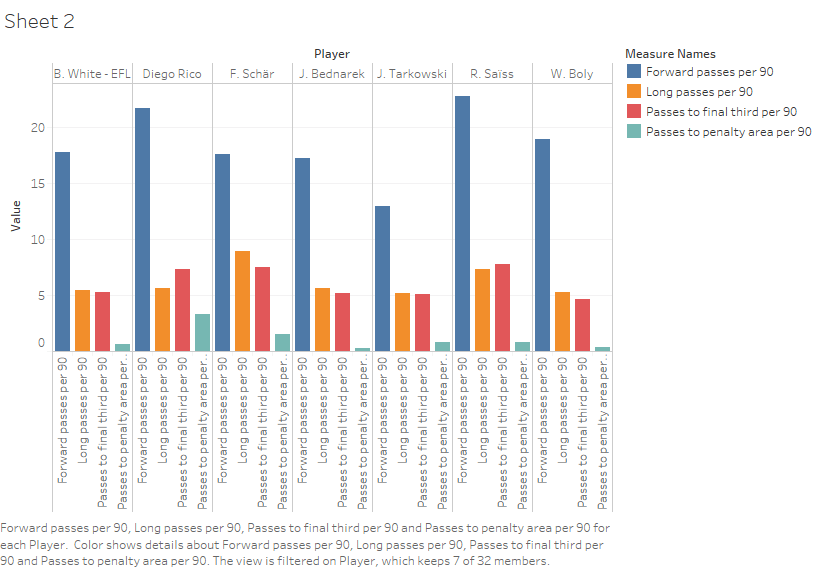 One of the fan favourites at Elland road, Kalvin is a rare find in the current game, given that the role of a defensive midfielder or a destroyer has never been more in-demand. Not many players exist in the current market who possess the game intelligence, the tenacity, the physicality, and the finesse to portray a ‘DM’ role as a flamboyant one.

Under Bielsa, his tactical, technical as well as physical acumen have reached a level where any big club across the globe would be queuing up to land his signature. Even though the season is just five gameweeks in, Phillips is completing 15.23 successful defensive actions per 90, which will fall, but he got over 10 per 90 in the Championship across the whole season, so there is every reason to believe he can match that number this season, if not improve on it. 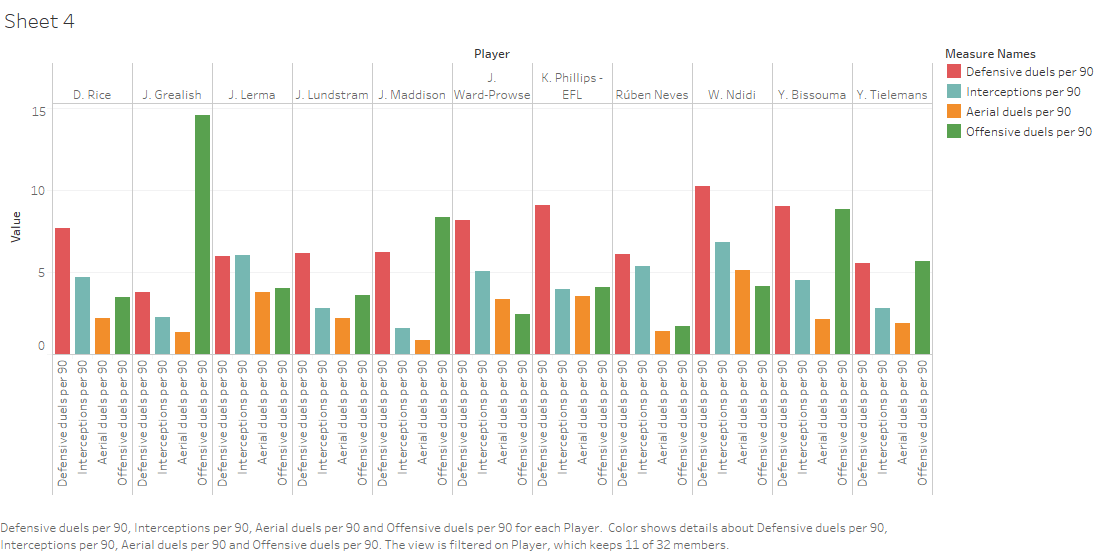 He recorded 3.83 touches in the box in 19/20 playing for a side who dominated possession every week from defensive midfield, so it wouldn’t be too farfetched to assume that he won’t recreate those numbers playing for a more dominant side, as he also attempts 6.33 offensive duels/90 in 20/21 so far. 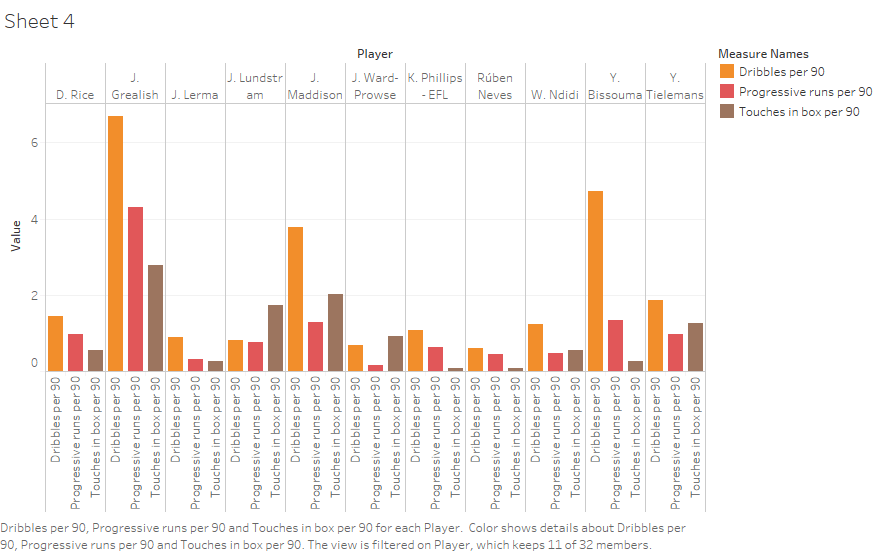 One of the various youth academy graduates of the famed Saints academy, Ward-Prowse has been a vital part of the first team since 2013/14. He has been groomed by his club to be a model professional, and that isn’t the only reason why he is looked up to by the Saints fans. After all, he is a technically capable footballer with good ability on the ball and the intelligence to adapt to the game off of it.

Prowse is developing into one of the prime candidates in the England set-up for a midfield spot, but has often been overlooked for bigger names, the same treatment Jack Grealish has undergone until recently. Even after a solid season in 19/20, where he contributed seven goals and assists, expected stats predict that he should have had closer to 14, double of what he produced.

And it’s not just his creativity that is something admirers look for in him. So far in 20/21, he has completed 10.99 successful defensive actions per 90, and is attempting seven defensive duels per 90. He passes the ball into the final 3rd seven times per 90 and attempts 7.48 progressive passes per 90. On top of that, the midfielder intercepts the ball 6.08 times per 90, which is up from 5.04 per 90 from last season. Not a spectacular dribbler, with just 1.17 attempted per 90, he is a late arrival in and around the box, rather than the one who gets the ball up there.

With a decent, if not underrated, grip on both his attacking and defensive duties, it’d be hard to understand why a European club won’t attempt to poach him. While he is still widely under-appreciated because he can become a midfield general for any side who is willing to take a chance on him, take a look at his former teammate, Pierre-Emile Højbjerg and his success. 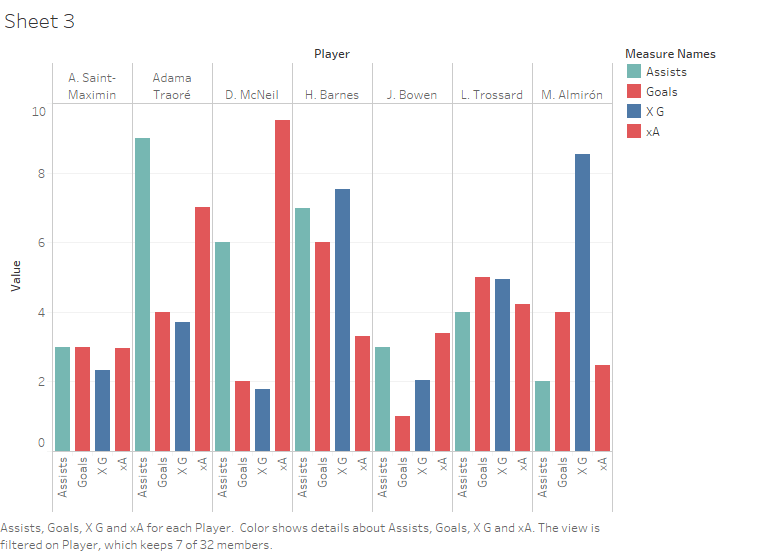 After a successful spell with Hull, Bowen looks to have set his sights on proving his worth at the top level after securing a move to West Ham in January 2020. Critics would have been thinking that he still needs a season or two to adapt after taking a big leap from a Championship relegation battling side to a Premier League relegation battling side – where there is no margin for even a thought of a mistake – but Bowen has been proving them wrong after finding his feet so far in the campaign. 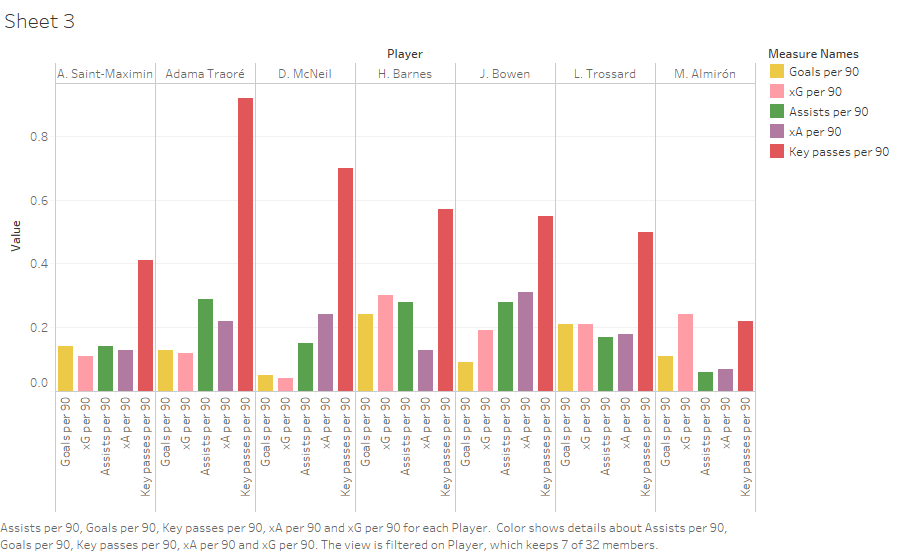 We would predict him as a standout performer, who could be the catalyst for West Ham finally attempting a genuine top six siege if the rest of the team doesn’t let him down. With three goal involvements already to his name in the first few weeks, Bowen was outstanding against Leicester and is registering 0.56 expected goals and assists per 90. He is completing 3.59 successful attacking actions per 90 in 20/21 so far as well, which suggests that he could fit into a pressing side, or defend from attack set-ups quite comfortably as he also makes 3.08 interceptions per 90 and 6.41 successful defensive actions per 90. 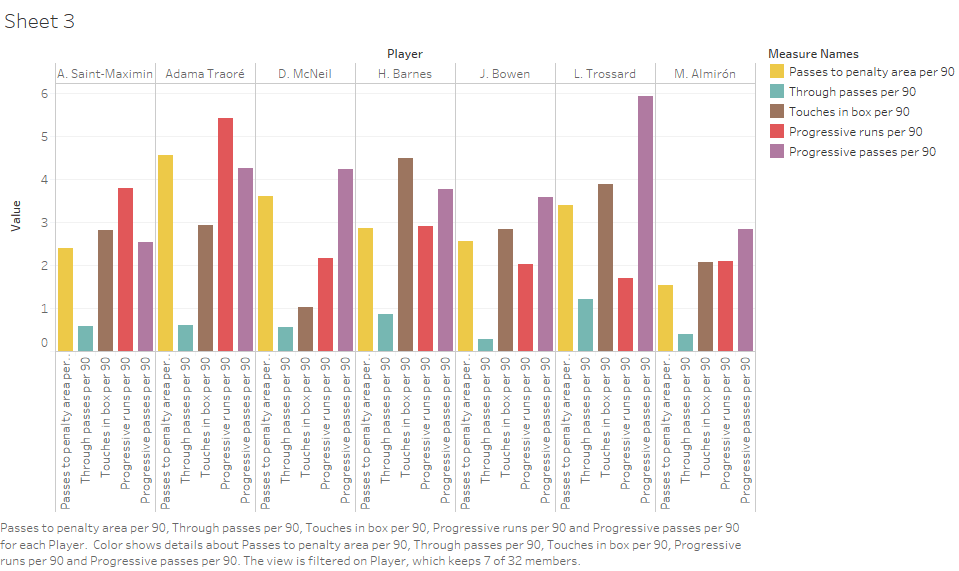 He is, however, not adept in the air as he only attempts 1.79 aerial duels, but with 4.62 dribbles attempted per 90, 2.31 progressive runs per 90, 3.85 touches in the box per 90, and 8.72 offensive duels per 90 so far, attacking seems to be where he’s most comfortable. There exists every reason to believe that he could be a genuine star in the Premier League within a season or two. 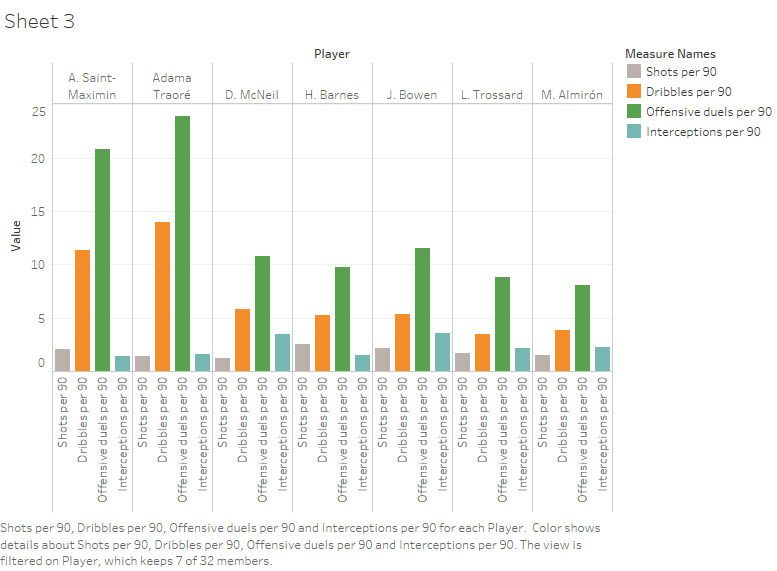 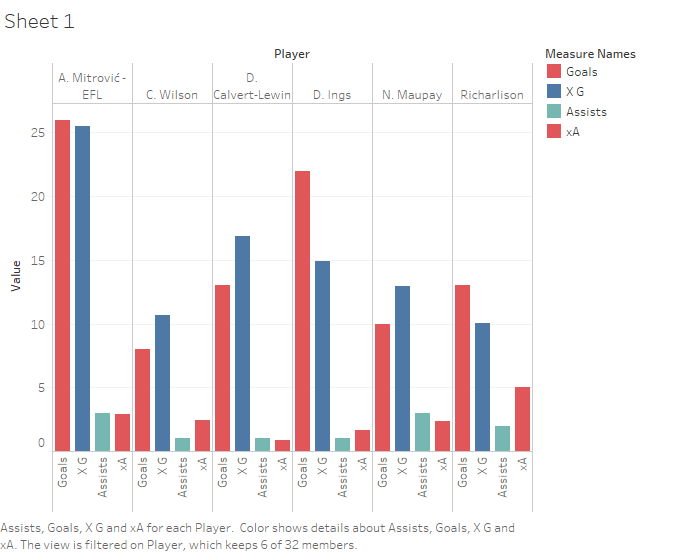 Neal has undergone a very diverse footballing education, having already represented clubs like Nice, ASSE and Brentford before he finally joined Brighton in 2019. His posture and stature suggest that he is the one to go a very long distance in domestic and international football, as he has the pedigree as well as the attitude to get there. 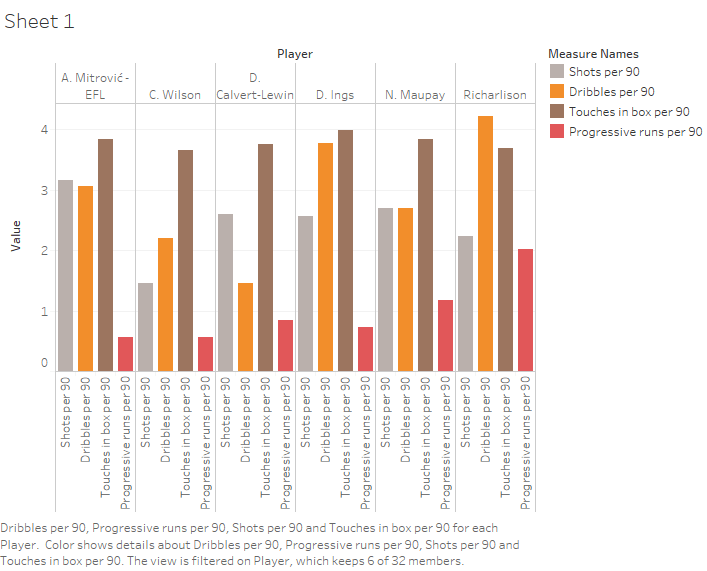 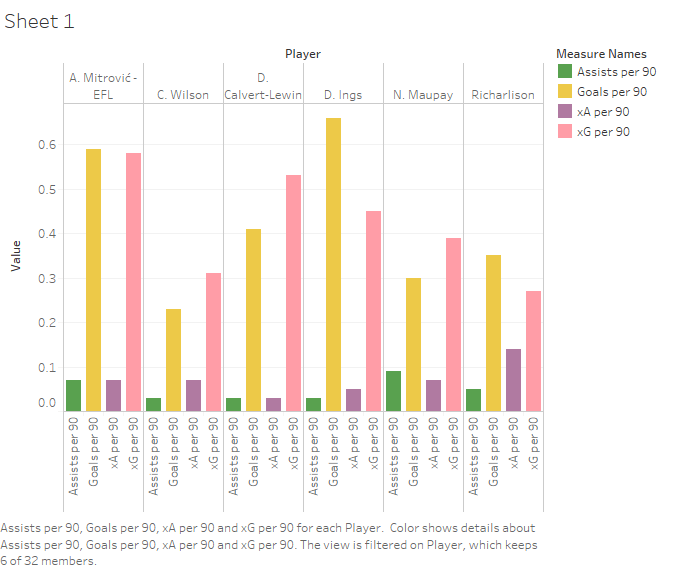 Not a defensive forward particularly as he completes 2.97 defensive duels/90, 3.43 aerial duels per 90, and just 1.37 interceptions per 90, but it’s his attacking stats where he quite easily explains why he is so good as we expect him to be. Maupay takes 2.51 shots per 90, and attempts 10.96 offensive duels, indicating that he is a forward who likes to bully his opponents into submission and is a character that one either loves or hates. With 6.33 successful attacking actions per 90 and 3.83 touches in the box per 90 in 19/20, it would be wise to keep an eye on him as his positional versatility makes him a very explosive asset. 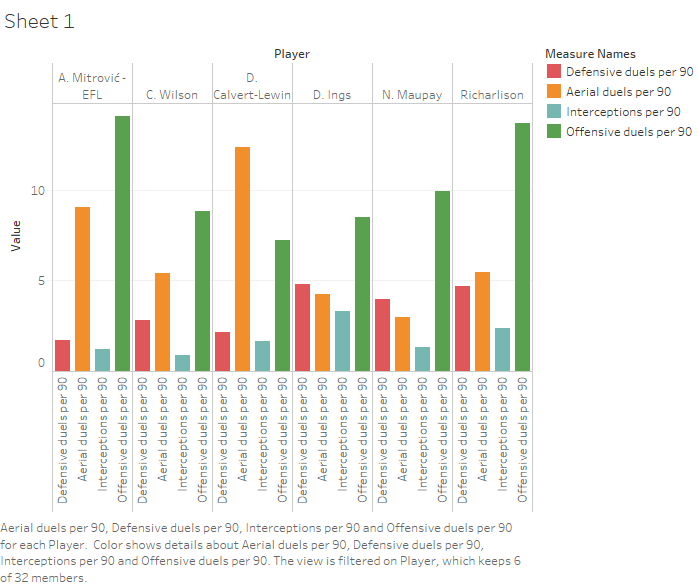 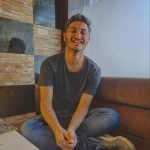