On the deadline day of the 2020 winter transfer window, Manchester United surprised the footballing world by signing Odion Ighalo from Shanghai Shenhua, on loan, to replace the injured Marcus Rashford. Many fans around the world questioned and even doubted this uncanny draft. Six months down the lane, most of them have renounced their words and have been praising the impact of the striker. This led to an extension of his loan deal on the 1st of June, beyond the current season till January 2021.

In this scout report, we will be analyzing his attributes and also the tactical analysis of why he has performed well for the team.

Since the departure of Romelu Lukaku last summer, United lacked an imposing figure in the forward line that could terrorize the defences with their strength and power. Ole Gunnar Solskjær’s philosophy of drilling the team with youth and having a modern-day striker along the likes of Aguero, Firmino, etc prompted Lukaku to set his sights towards Inter Milan. But Ole’s experimentation of Martial as a striker has had mixed success. Coupled with that Rashford’s mid-season injury provoked Ole to bring in an experienced striker with a different play style to that of Martial’s. Let’s start the analysis.

With a strong physique and a great upper body strength, Ighalo fits the role of a classical number-9. With this body strength comes the ability to hold the ball and bring in teammates into play. His efficient use of back-to-goal has been an impressive attribute of his. 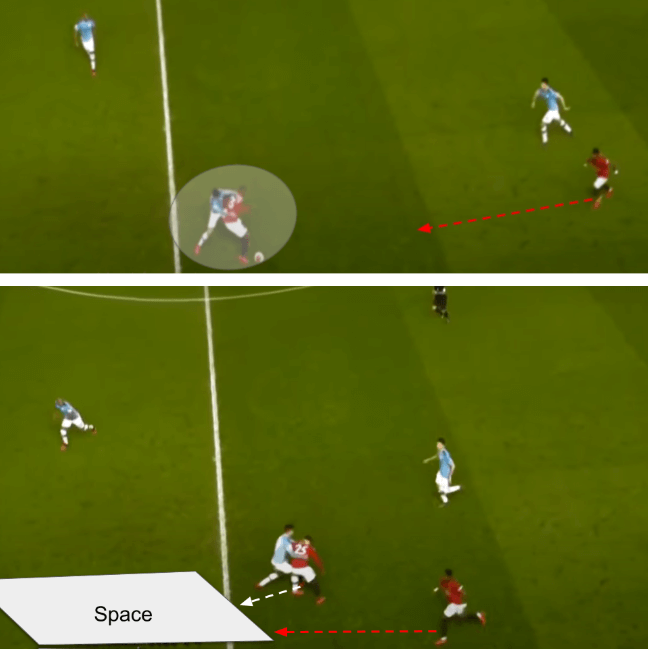 In the example above, we can see Ighalo dragging Manchester City‘s Cancelo out of his position by receiving the ball (first image). He protects the ball with his body and sees Fred making a run into the space vacated by Cancelo. He simply lays it for Fred, who has acres of space to build-up. At times he has linked with Fernandes in this way by using his strength to lay-up a shot assist. His ability to hold-up also allows him to win fouls in dangerous regions or to help his team keep possession in dying moments. We can see an example of that in the image below. 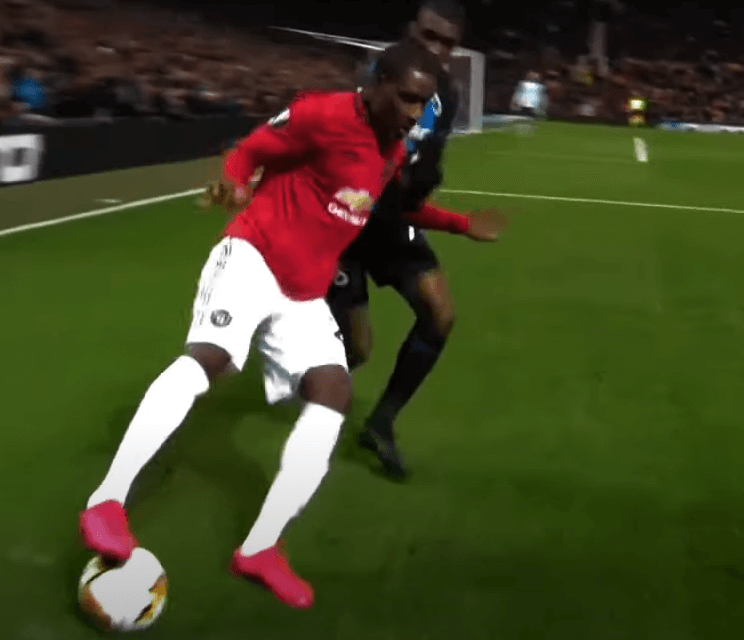 He also uses his body strength well to beat opponents and progress the ball. In the image below, Ighalo chases the ball and he is supposed to contest with a Derby player to win it. He eventually uses his upper body to give him the upper-hand in the challenge. The derby player effectively loses his balance and falls, hence giving Ighalo to carry the ball. 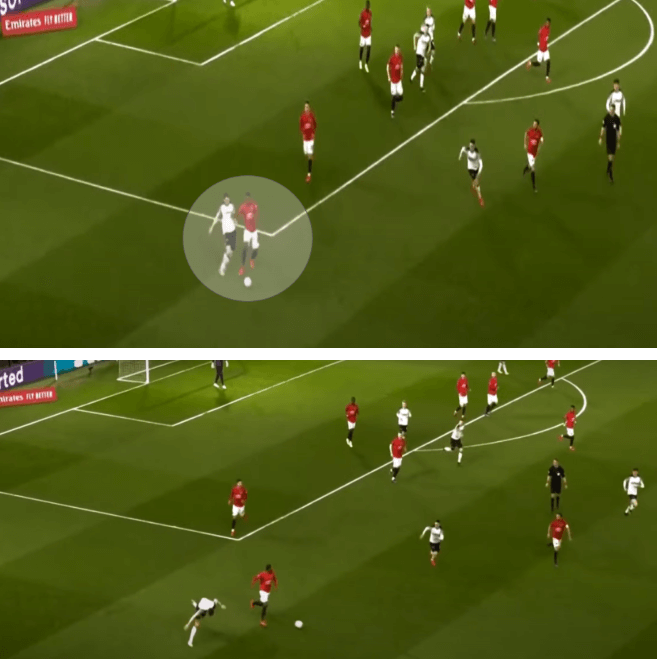 In another example below, this time Ighalo has to fight for the ball with 2 opposition players. He engages in a physical battle with one of them and also has to keep in mind to take the ball past the second one. He uses his upper body to win the ball first and then beats the other player by moving the ball in the other direction. This has taken two opposition players out of the equation giving United the edge in the build-up. 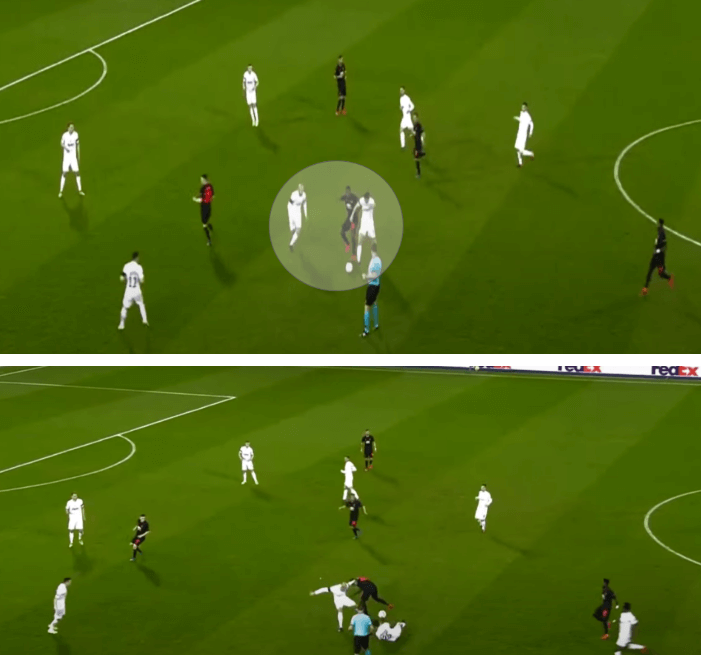 Well, he also makes good use of his ability to create scoring opportunities. In the image below, he holds the defender with his strength and meets the cut-back from Mata to score an easy tap-in. If United decide to play a much more direct approach, with their tactics, they can make full use of his strength. 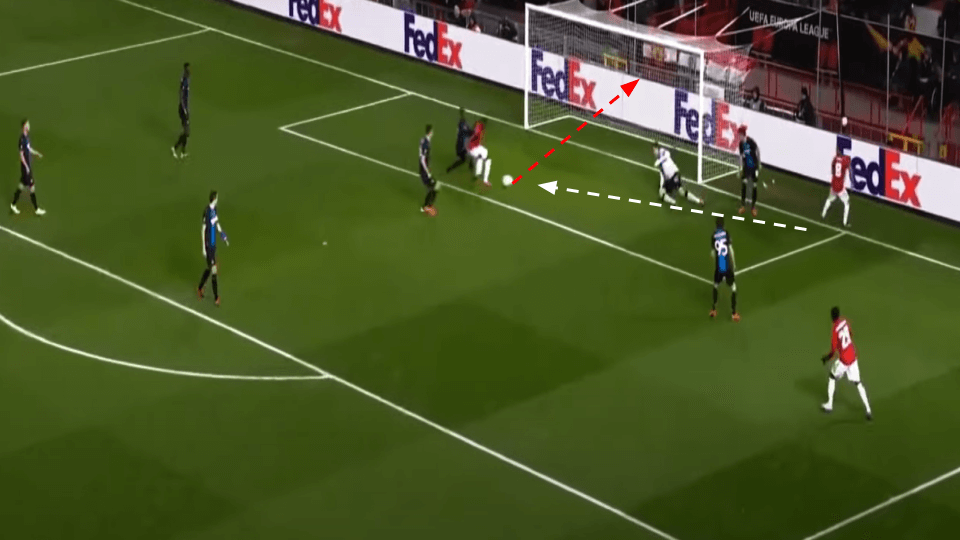 In the image below, he can receive the ball and hold it up from the defender. Immediately he makes a turn, which gives him a sight at the goal and an opportunity to score. This is something that we have never seen from someone like Martial or Rashford this season. 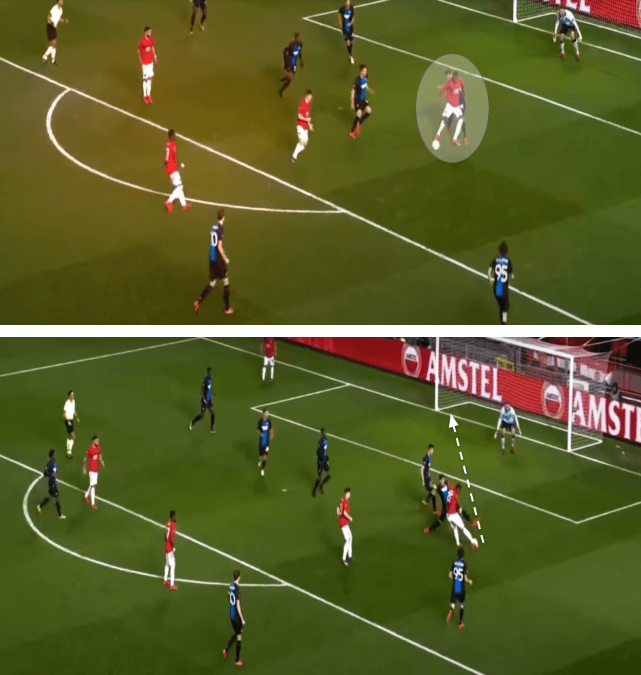 Manchester United for many seasons had to endure the sloppiness of Romelu Lukaku on the ball. Although a great player, his poor first touch has irked many sections of the fans and has derailed United’s ball progression. This is one of the reasons why Ole decided against making him a first-choice striker ahead of Martial. In comes Ighalo, with a similar build to that of Lukaku but with a much better technical ability with the ball. In the image below, beats Benjamin Mendy with ease. 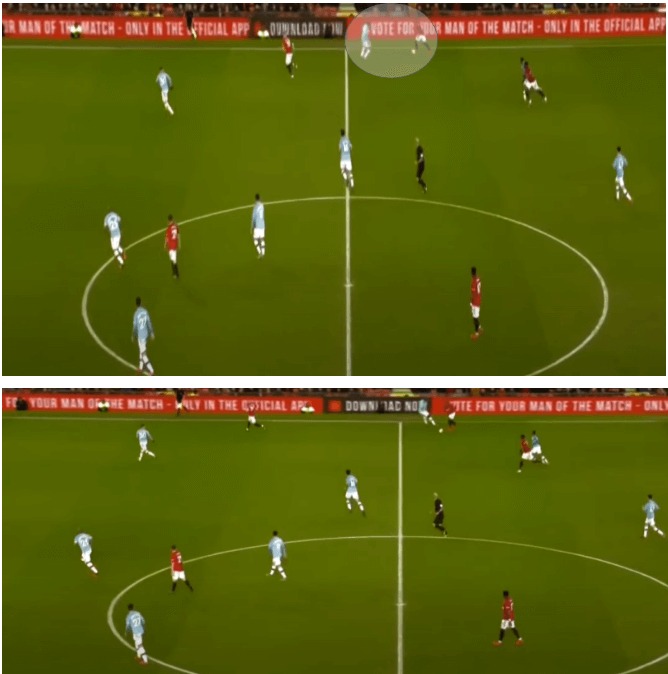 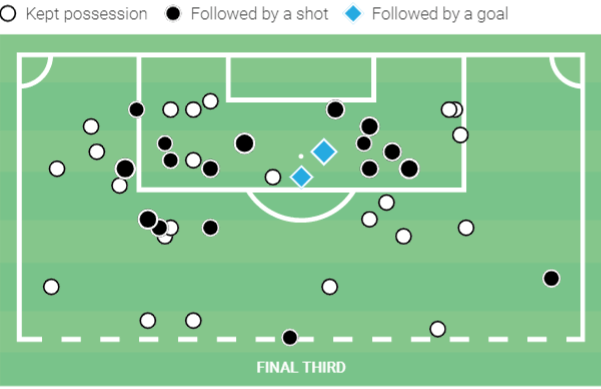 Although most of them are from an inferior Chinese Super League, we must note that for someone of his build, dribbling doesn’t come as naturally as it does. Let’s see another example of his first touch resulting in a goal. Bruno Fernandes plays a lob pass to Ighalo (circled), he takes the ball with his right foot. He immediately sees the defender coming to intercept the ball so he juggles it a couple of times to the other side and makes space for himself to score a goal. 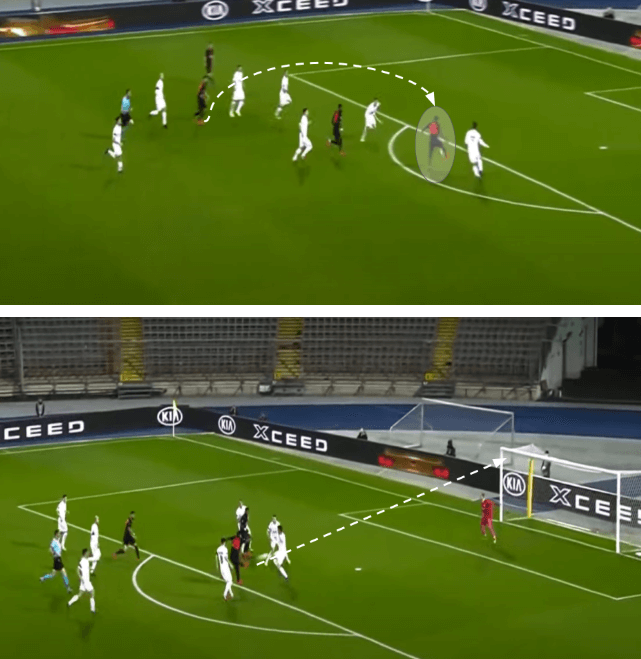 His signature move is to fake the opponent by looking to change the direction of the ball when they go for a tackle. In the example below, we see him trying to pass the ball to his teammate getting into the box. When the defender goes for a tackle, he immediately switches his direction and dribbles past him. 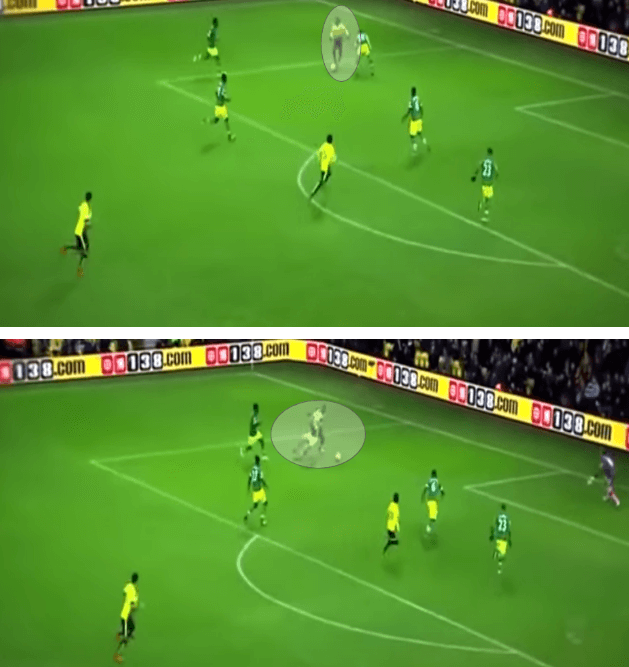 In the example below, he does it with his left foot against quality opposition in Manchester United when he was with Watford. 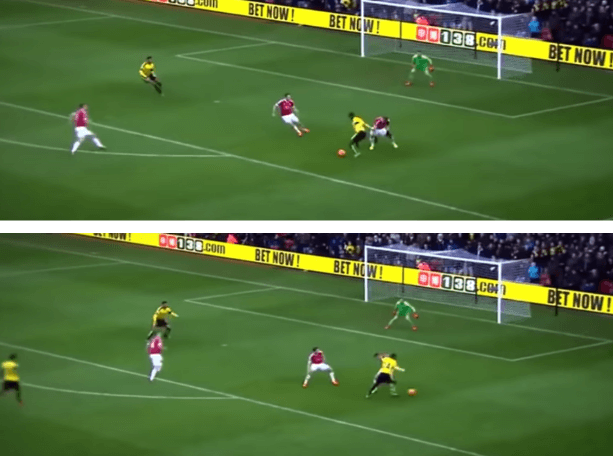 Despite being labelled as an old-school number-9, Ighalo has often drifted to the wings to help his team build-play. His ability on the ball that we have discussed in the previous section gives him liberty to take-on defenders progress the ball forward. We can see some yellow marks in the left-wing and few marks even in the right-wing. 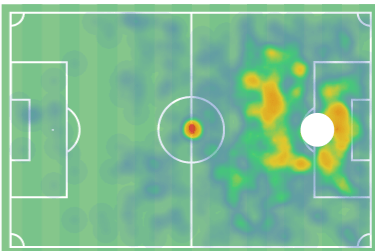 He drops into the midfield to help United gain a numerical advantage there and help them progress the ball. Along with that he also drags a defender or two out of position creating holes in the defence. In the Europa game against LASK, he did something similar to this. After dropping into the midfield, he creates a huge space in behind the defence. This paves way for Dan James to make a run into space and he threads a ball to him. Dan James goes on to score. Someone like Rashford will be much more benefited with such actions during the season restart. 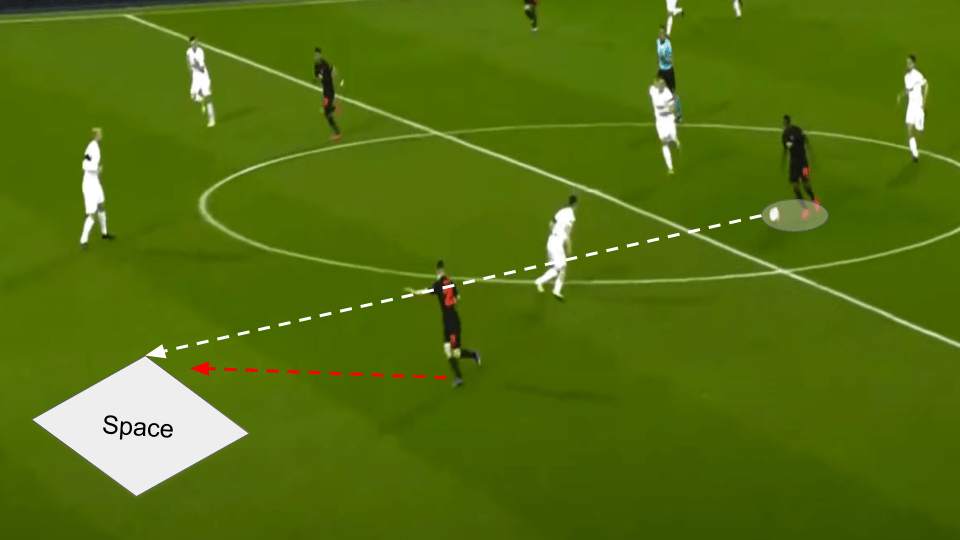 In the image below, he takes the ball into the half-space during a counter-attack. After occupying there, he drags the attention of 3 opponent players. He is now in a position to play a pass in the space at the edge of the box. Had Fred made a run into the space indicated by the arrow, he could have had a goal-scoring opportunity without anyone marking him. 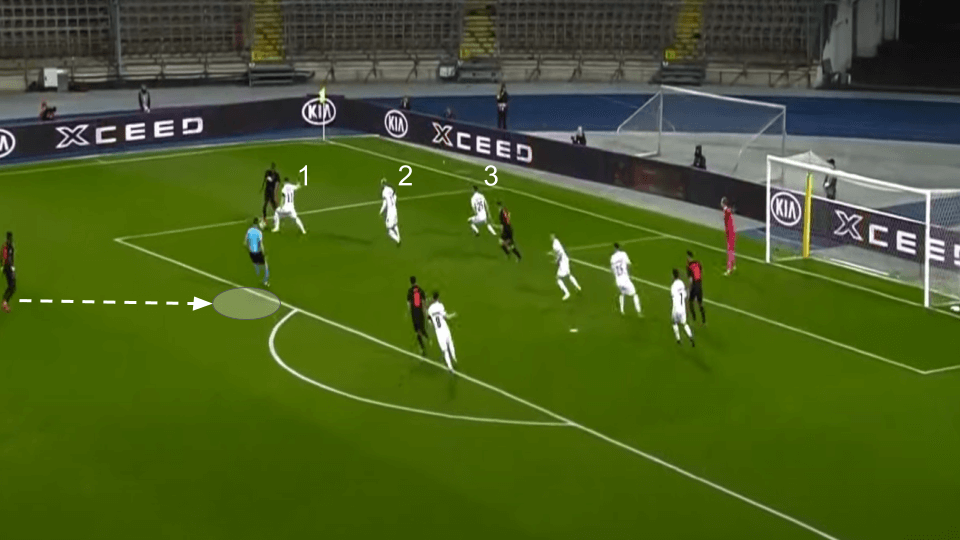 Presence around the box

Like we have discussed before, Ighalo is not static and does not wait for the ball to come at him. He makes constant movements in and around the box. The usual criticism going around with Martial is that he does not move a lot to open spaces. Ighalo gets into these positions and helps his team to build-up and create scoring chances. Mata and Fernandes, in the images, are free waiting for his cut-back.

His penalty area deliveries map indicates that he likes to move into the half-space and deliver the ball. The delivery map below is only at his time with Manchester United. He likes to carry the ball a lot into the box where he has carried it 16 times. He has also attempted 14 passes with 9 of them accurate.

Certainly not a natural finisher like Harry Kane or Jaimie Vardy, but Ighalo is someone who regularly makes runs into the box and occupies space to score goals. 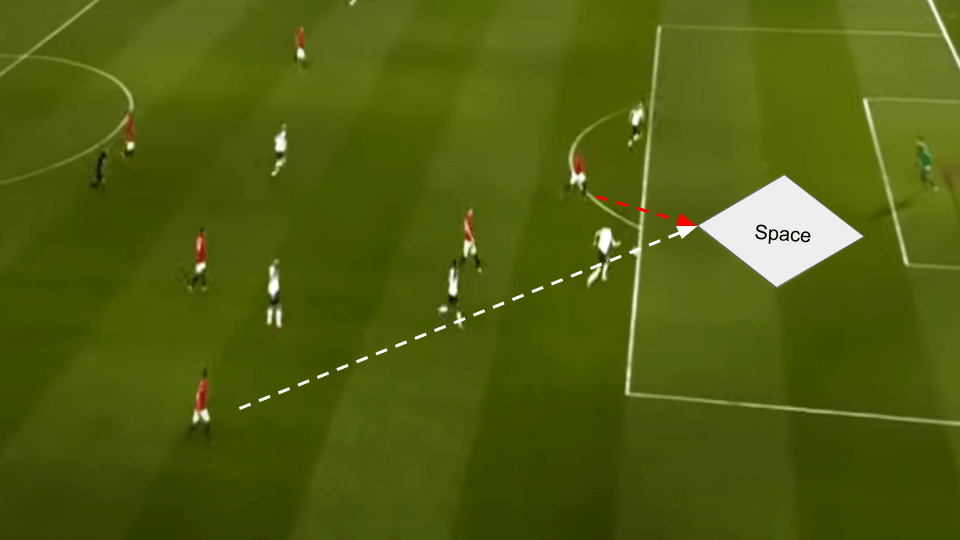 His combination with both Juan Mata and Fernandes has been impressive in this short stint. He goes into the space inside the box for their cut-backs after playing a neat one-two with them. They have already assisted him a total of 3 goals, with Mata claiming 2 for his credit. He has also assisted few of their shots by linking-up with them (5 shot assists worth 0.56 xG). 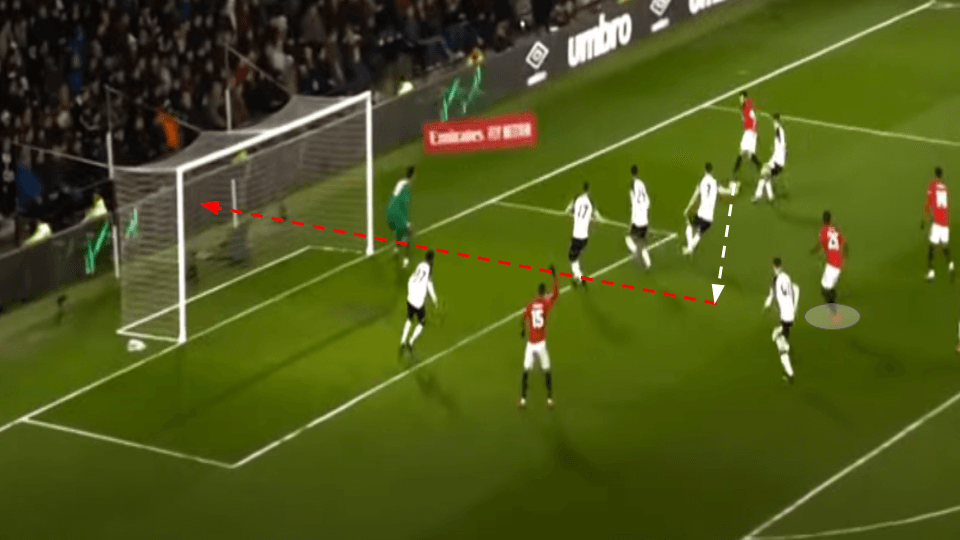 Though he makes good runs into the box occupying space, he has sometimes failed to escape his markers. At times, the defenders have found it easy to mark his movements when he does not try to trick them by making curved runs. Like in the example below, he goes into the box along with the defender Mechele. Mechele marks him tightly so he could have made a curved run to escape his marker.

After discussing his abilities, it’s time to compare him with the only other striker that United have had, Anthony Martial. We can see their radar charts below that compares both of them. Metrics associated with forwards like xG, xA, conversion rate, etc are used. 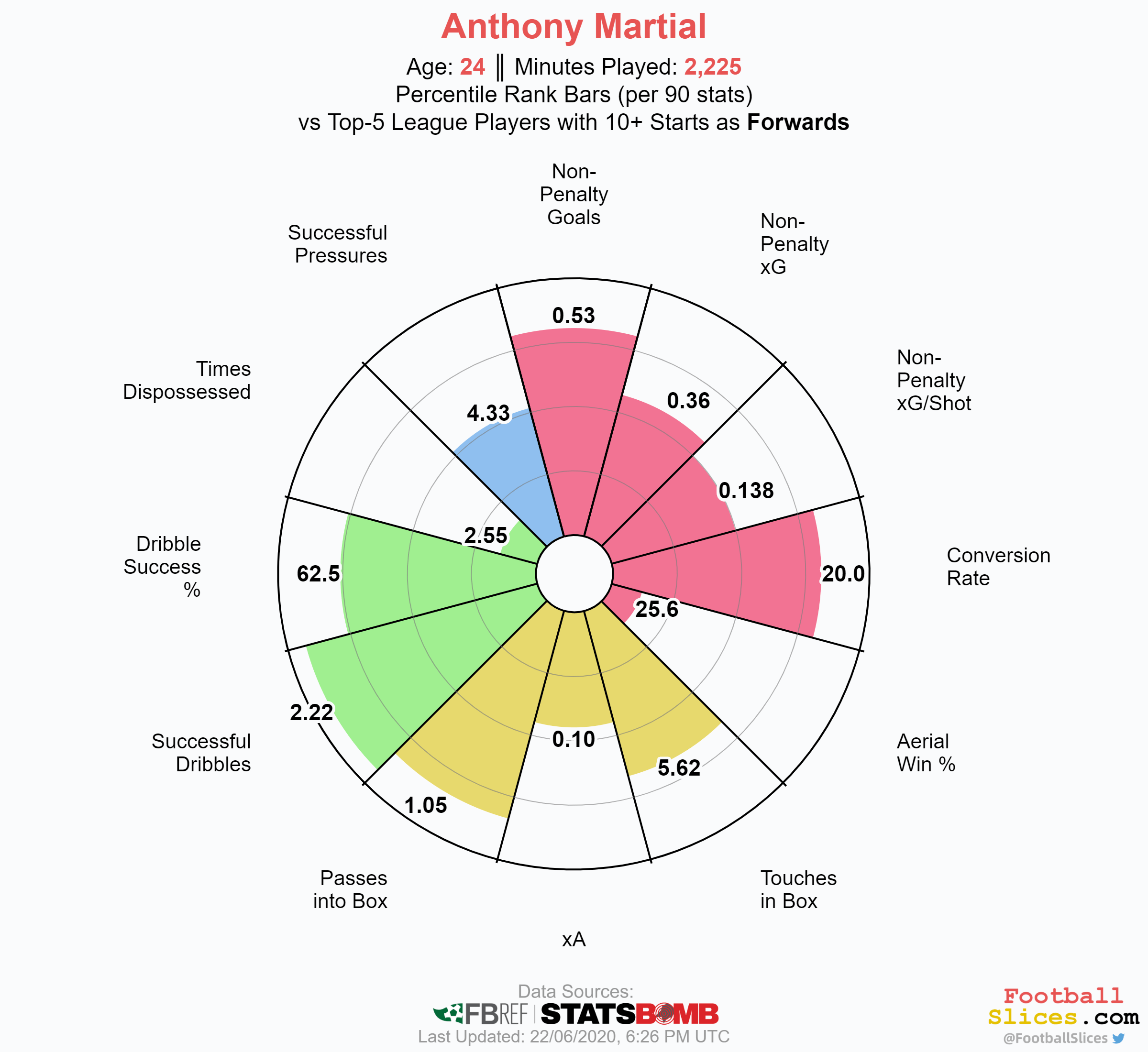 The data considered is taken from Premier League and Europa League this season. Also, all the metrics are converted to per 90 to remove the number of minutes played bias. From the chart, we can see that Ighalo has taken much more shots and has superior non-penalty xG of 1.07 than Martial (0.36). He also yields an xG per shot of 0.223. But Ighalo does not seem to be a better finisher than Martial. While Martial has over-performed his non-penalty xG by scoring 0.63 goals/90, Ighalo has underperformed significantly by scoring just 0.73 goals against an xG of 1.07. The fact that Martial has a much better conversion rate of 20% against Ighalo’s 15.4% seems to prove that indeed he is a much more natural finisher than Ighalo. 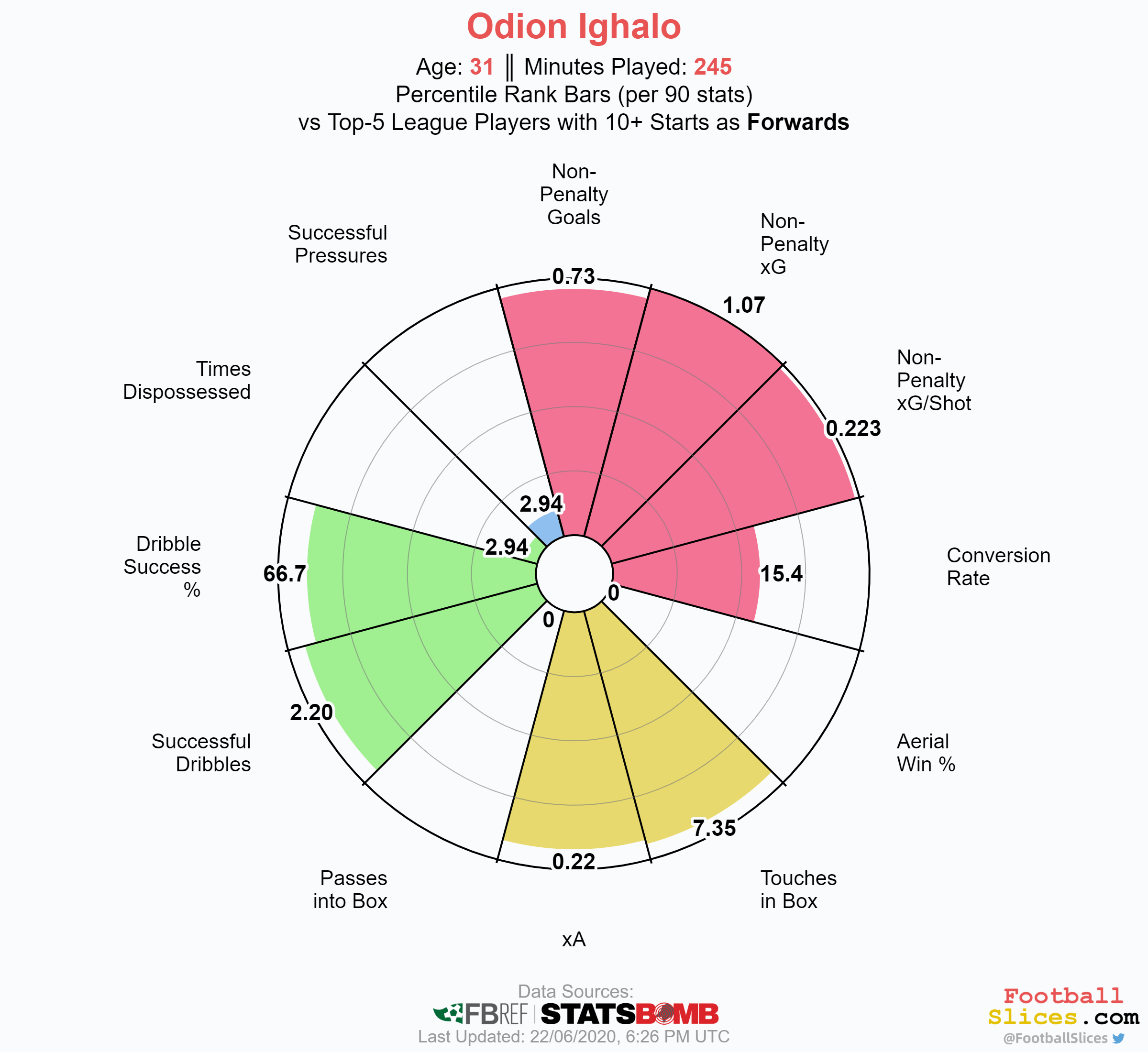 As said before, Ighalo is not just a goal threat. He offers much more to the table. He has a better xA value (0.22) than Martial (0.1), showing his playmaking abilities. Also, he made more touches inside the box/90 than Martial, proving that he is much more mobile and likes to get into the box. Another issue with Ighalo is that despite having a strong physical presence he has won very few aerial duels. His aerial duel win percentage is 42.8%, which is more than Martial’s but still less considering his physicality and strength.

Ighalo has performed exceedingly well than most of them expected him to. Brought in as a cover for Rashford till the remainder of the 2019/20 season, his hard work has won the hearts of many United fans. This deservingly led to a contract extension until January 2021. If he does maintain his consistency and help United to a spot in the UEFA Champions League, he might be offered another contract renewal. But only time will answer that. As of now, his rise from the CSL to the PL at this stage of his career, playing for the club he supported since his childhood, has been nothing short of a fairytale.