Noni Madueke is a young English forward who currently plays for PSV Eindhoven in Eredivisie. This scout report will contain a tactical analysis on Madueke’s attributes and his playing style. Madueke has already impressed this season as an integral part of the PSV squad, having scored eight goals and made eight assists in 24 appearances in all competitions, at the time of writing.

The youngster joined PSV from the Tottenham Hotspur youth teams in July 2018. He is of Nigerian origin and is therefore eligible to play for both Nigeria and England. He has been a part of the England age-group squads from the U-16 to U-18 level.

In this analysis, we will see why Madueke is generating a lot of ‘buzz’ this season, and with Brexit forcing English clubs to look for more homegrown players, he could be a target for multiple Premier League clubs in the summer.

Noni Madueke is an 18-year-old forward, standing tall at 188 cm, who can play across the front three. He has had some quality performances when playing on the right-wing, as well as a centre forward for PSV this season. Madueke is a left-footed player, which explains his tendency to move to the right flank before coming inside, as can be seen in the heatmap – 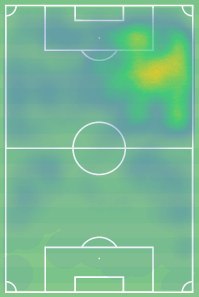 Based on PSV tactics Madueke usually played as a centre-forward, but as stated earlier, he has a tendency to drift to the right flank. Since he is left-footed, he often tries to cut inside to shoot, and he avoids using his right foot too much. Given his age, it is already quite impressive that Madueke is able to have an impact in the final third, and we will now have a more detailed analysis of his strengths, weaknesses and traits.

In this section, we will take a look at Madueke’s movement in the attacking phase and how he gets into promising situations. 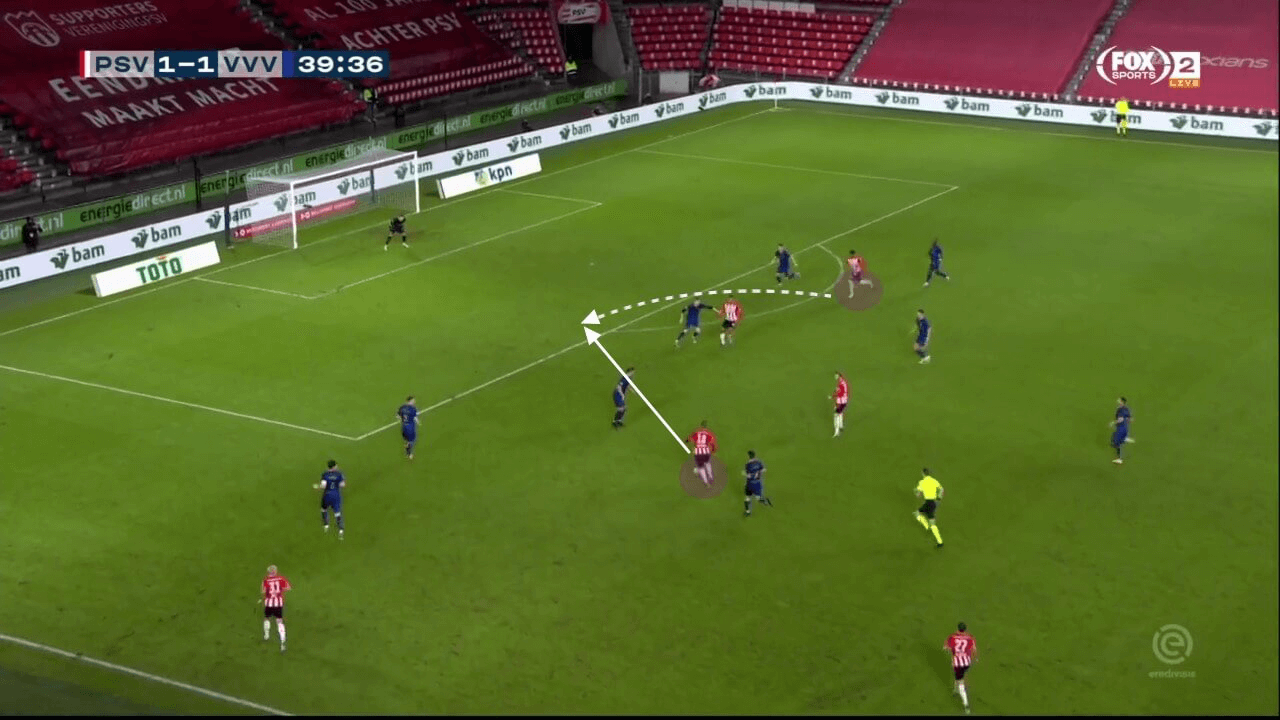 In this image, we can see how Madueke makes a run in behind the opposition defence. The 18-year-old makes a curved run between the full-back and centre-back into the penalty area. This type of run is something that he will have to make more often because when he plays on the right-wing he usually looks to receive the ball to feet. However, when he plays on the left side it is harder for him to cut inside which leads to fewer touches on the ball and more off the ball movement. The next example shows how he moves when playing on the left. 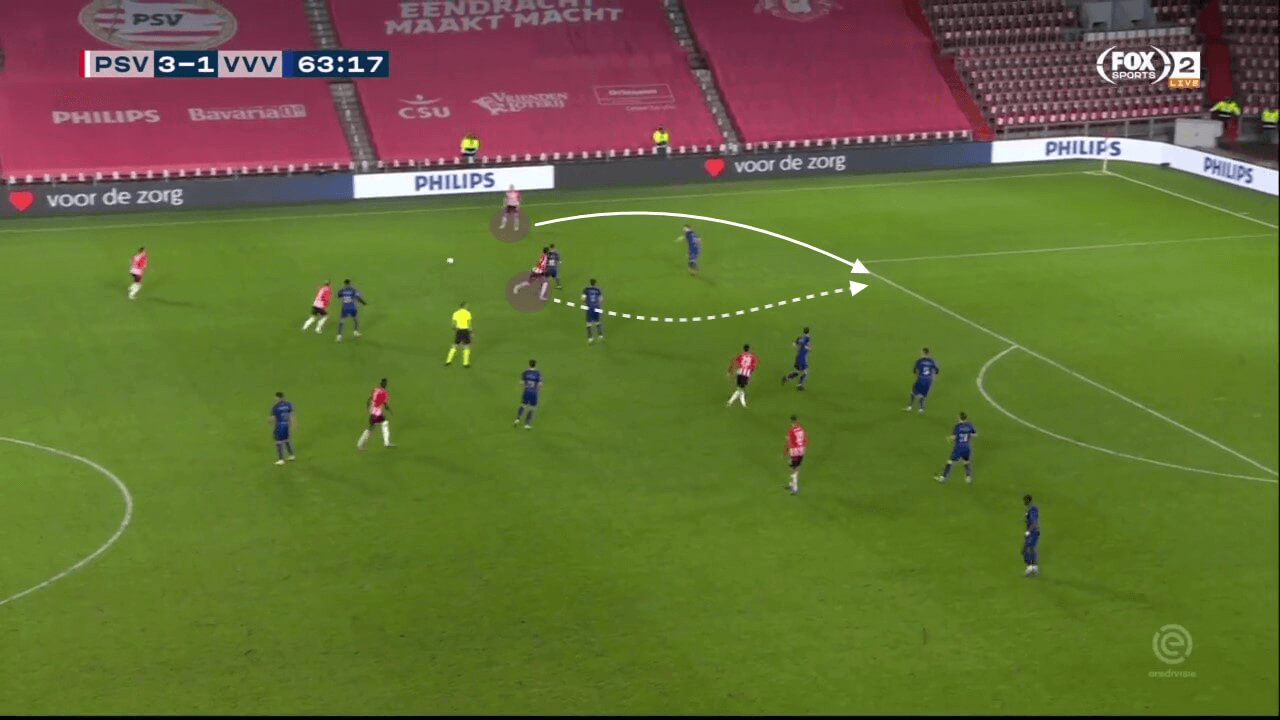 In this situation, Madueke received the ball on the touchline and made a run towards the centre. After passing to his teammate in midfield he continued his run towards the opponent’s penalty area. When the midfielder passed to the left-back, Madueke instantly started an underlapping run into the open space behind the defence. His long-legged running style makes it difficult for the opposition to keep up with or stop his runs, especially when he gets up to full pace, and this is an advantage that can allow him to get into promising positions.

The next two images will show us how dangerous Madueke can be in transition. 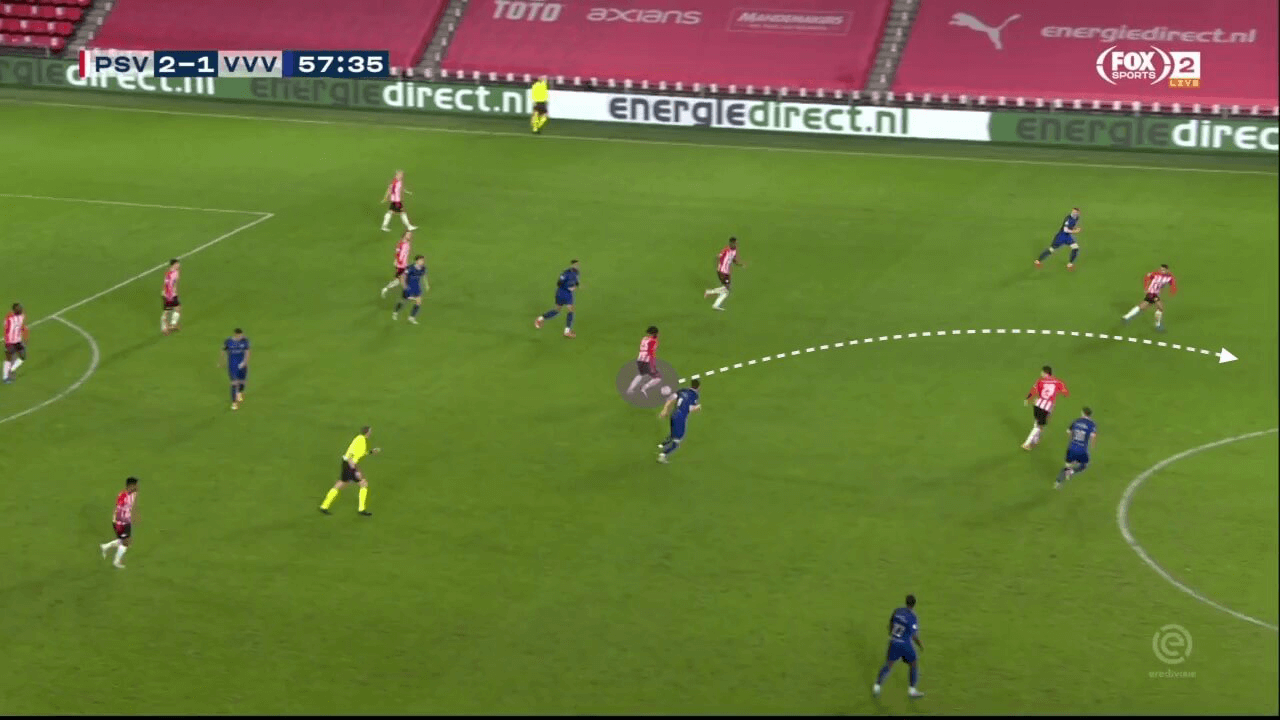 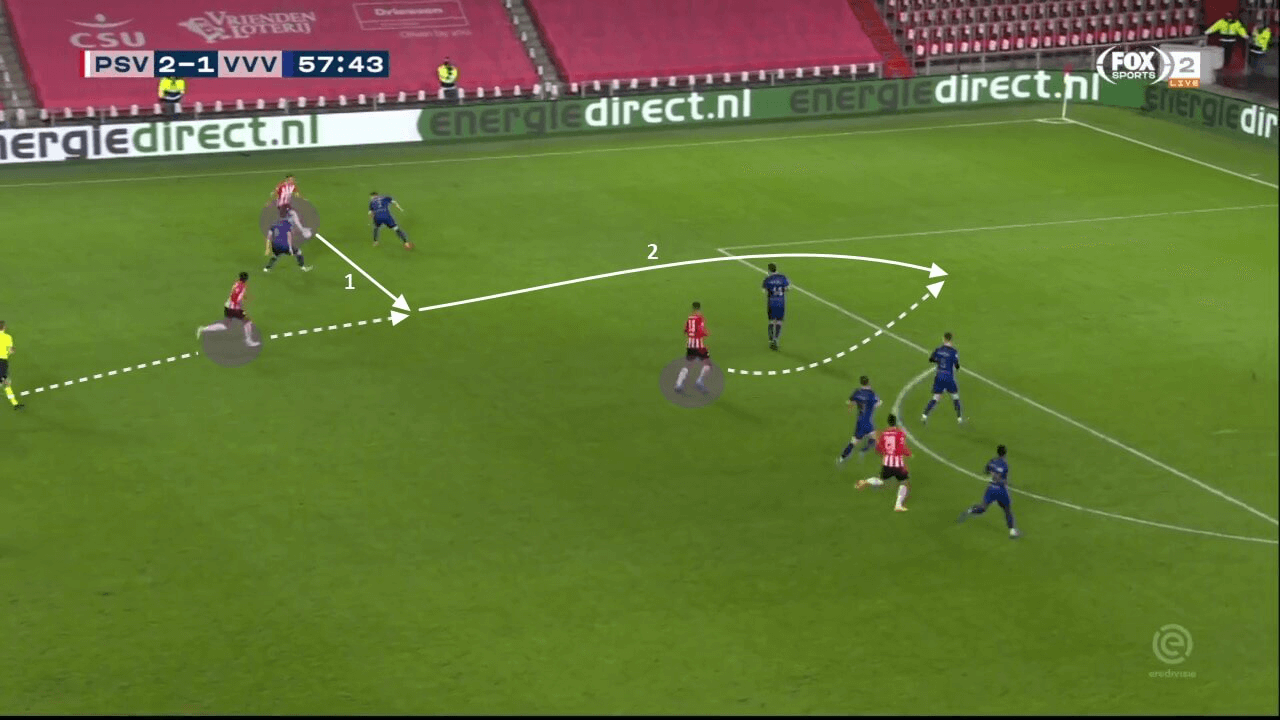 His teammate on the wing attracts the attention of two opposition players, which creates a lot of space for Madueke to receive the ball. His teammate passes towards Madueke and the opposition centre-back has to step forward to close him down, which opens the space behind him. Madueke recognises this open space and instantly makes a through pass for the centre-forward, putting him in a 1v1 situation with the goalkeeper.

The last situation in this section shows us Madueke’s spatial awareness, not only when receiving the ball, but also to exploit space in the opponent’s defence quickly by making the right pass. He likes to receive the ball in the half-space between the opposition lines. Most of the time this leads to him turning onto his stronger foot to move inside with the intention to shoot. 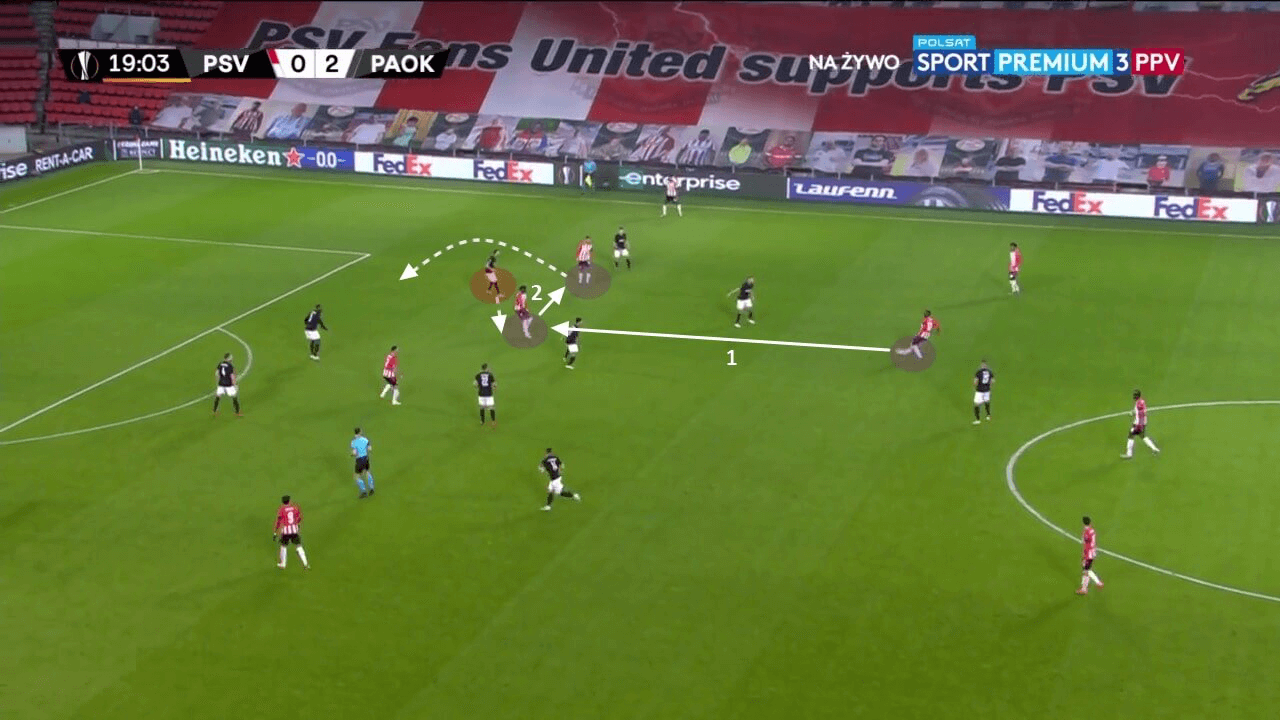 In this situation he gets the pass from his teammate which draws the opposition full-back, who was marking his teammate, towards him. Madueke shows good awareness of his surroundings and makes a quick pass to his teammate who progresses with the ball into the penalty area to set up a good goalscoring opportunity.

In this section, we have shown a few examples of Madueke’s movement and spatial awareness. He can be very dangerous with his runs behind the defence and these are the type of runs he should tend to make more often.

After looking at situations where Madueke makes an impact without the ball, in this section we will evaluate his actions when he is in possession of the ball. In the example below, we will see the most common situation when Madueke receives the ball in the opponent’s half on the right side. 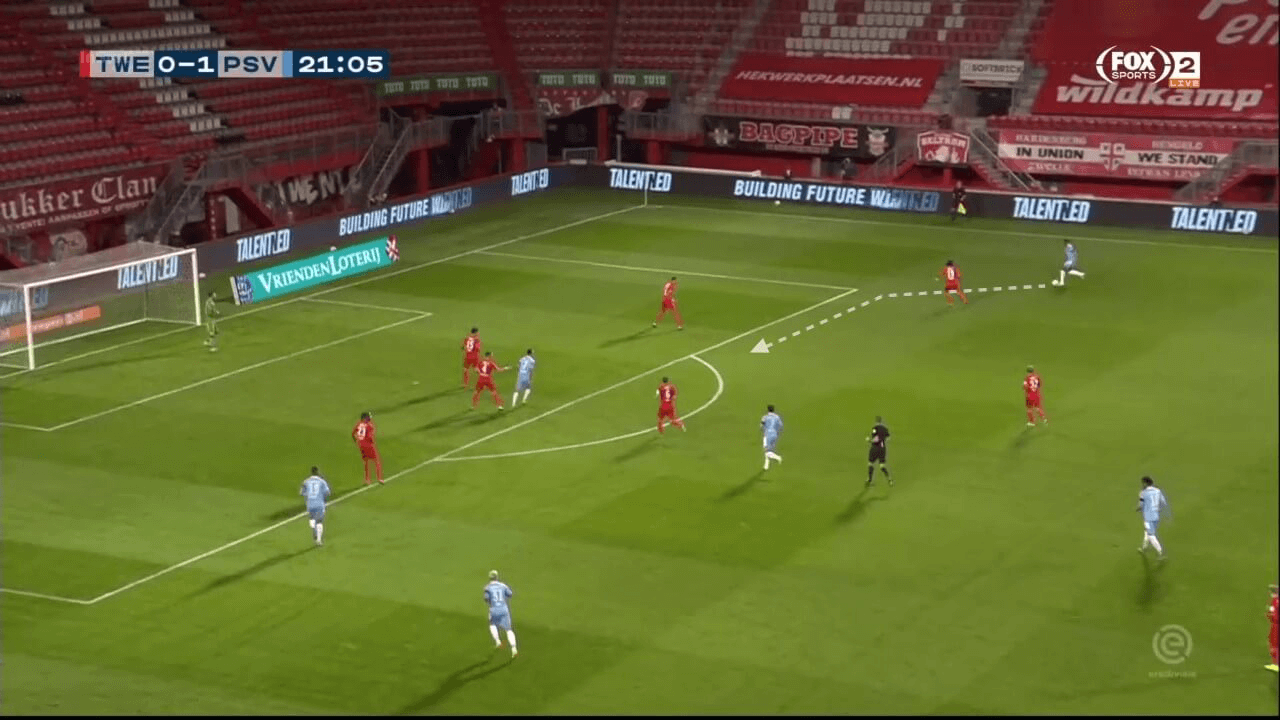 Madueke likes to receive the ball to feet when out wide, from where tends to cut inside on his stronger left foot. Here, he makes a direct run towards the defender, trying to draw him into a tackle, before suddenly accelerating and changing direction towards the central space. Madueke’s close ball control allows him to move the ball onto his left foot quickly before attempting a shot on goal. Given his height, his ball control at pace is at a high level, which gives him an edge in these situations. 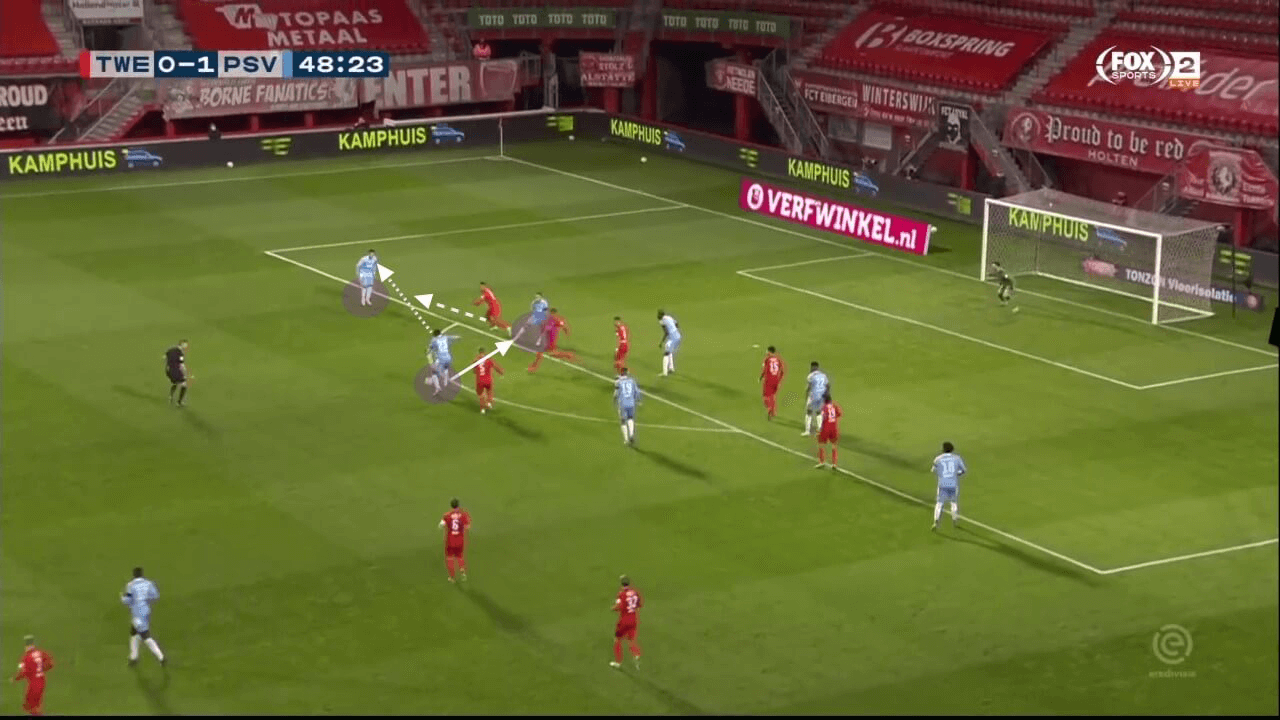 In this situation, he positioned his body to make it seem as though he was going to pass outside to the player to his left. The way he adjusted his body tricked the opposition full-back who tried to anticipate the pass and intercept it, but this movement opened up space between him and the centre-back. Madueke then decided to make a vertical pass rather than a lateral pass, which put his teammate through on goal. Madueke’s quick thinking in this situation shows his high football IQ and his ability to adjust quickly to developing situations on the pitch. 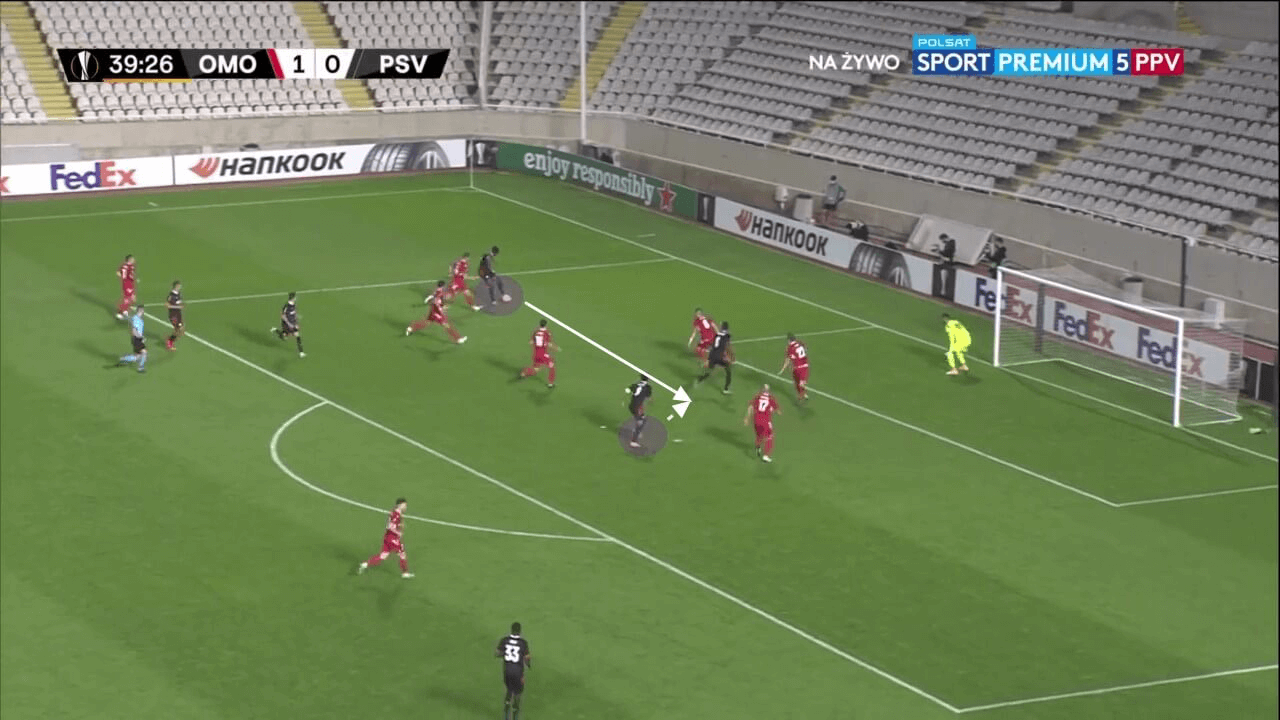 In the last image in this section, we can see another situation in which Madueke created a chance for his teammates. In this situation he carried the ball into the penalty area from the left, and created space for himself before attempting a cut-back to his teammate. Madueke made a high-quality pass between four opposition players towards his teammate who scored from this situation.

In these situations, Madueke usually looks for a low cross into the six-yard box, but in this case, the cut-back was the right decision.

Given Madueke’s age, the impact he has made already shows that he is a highly talented youngster. However, there are certain aspects of his game where he has to improve. We mentioned his trait of avoiding using his right foot, and this makes him predictable, especially when dribbling. The example seen in the next image is something that happens frequently with Madueke. 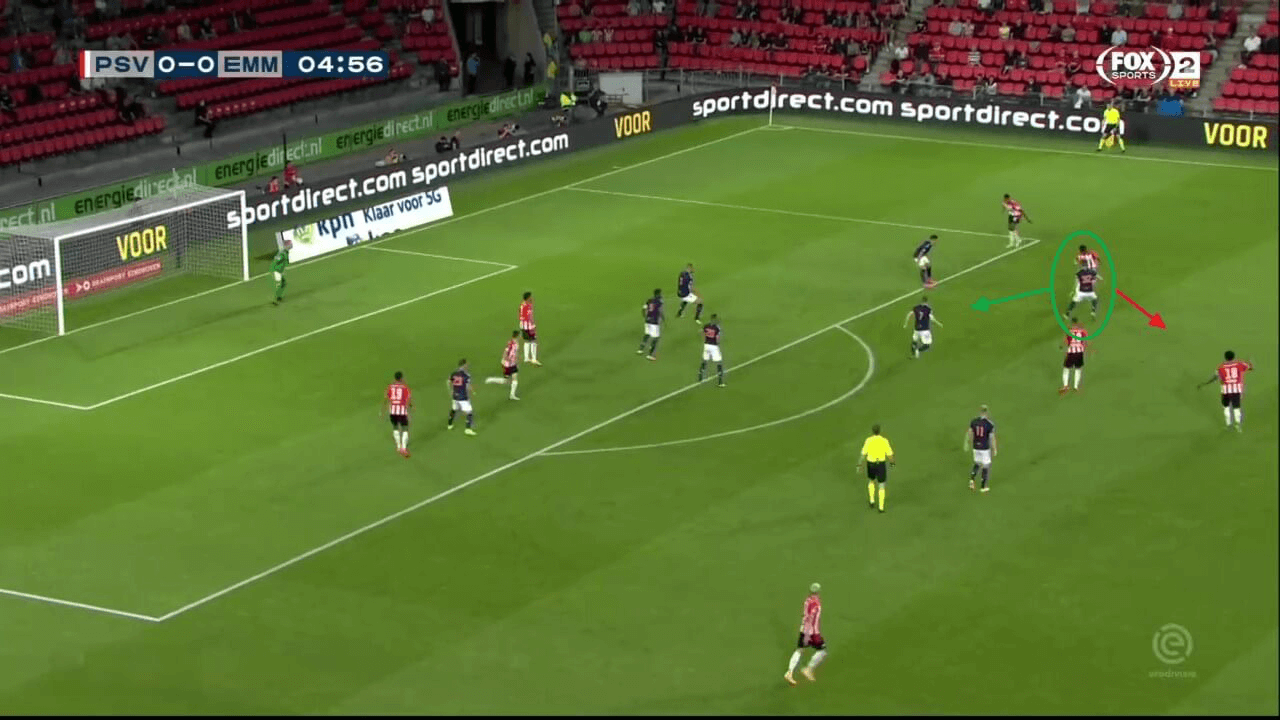 In this situation, he is pressed by the opponent, which leads him to make a poor decision. His tendency to go to the left gets him in trouble because he moves away from the opposition goal and that move has a low-quality impact even if it is successful. He loses the ball here, and it leads to a counter-attack for the opponent.

It is clear that going to his right would be a smarter decision as he would have potentially created a 2v1 with the opposition full-back and could pass to his teammate who is positioned just inside the penalty area. Improving his decision-making in certain situations, as well as improving his weak foot ability, which would allow him to go either way when dribbling, are two areas which can add a lot to his game.

He is also selfish sometimes, and he could potentially have had even more assists if he tried passing to his teammates in better positions, but this is a part of the development process for him and with experience he will make better decisions in the final third.

Defensively he is active and tries to press the ball carrier when he is close to him. Sometimes he rushes into duels which can be a problem if he mistimes the tackle. His pace and long legs provide him with the attributes to cut out passing lanes and intercept passes, while he has the physical attributes to be an effective contributor without the ball.

Through this analysis, we have evaluated Madueke’s offensive qualities since he has shown his ability to impact games through goals and assists this season. It is clear that he has high potential, and his physical and technical qualities make him one to keep an eye on for the future. Having already had 16 goal involvements this season, the youngster should be looking to kick on and try and reach 25 goals and assists this season, which would represent a superb tally for an 18-year-old, and create even more attention on him during the summer window.