Despite the COVID-19 pandemic, Inter Milan could be one of the big players in the transfer market this summer. The reason for this is impending revenue in the hundreds of millions that await Inter in the sale of Lautaro Martínez and Mauro Icardi.

Icardi will play for the French top club Paris Saint-Germain next season again. They pulled their buy-option after being extremely satisfied with his performances during the loan. Martínez, on the other hand, is still in the focus of all international top clubs such as FC Barcelona or Manchester City. Real Madrid is also said to be interested in the Argentine striker.

In return, the Milanese have to look for a replacement for their attacking department. Matheus Cunha has therefore been in the focus of the Nerazzurri for two years already. Because the fluctuation in the Inter offence requires external reinforcements after this season, the Serie A club is said to have inquired again at Cunha’s management.

In general, however, it is also clear that even if Martínez remains, another alternative is needed for the offence if Inter wants to play for the title next year again. Finally, Alexis Sánchez, currently on loan from Manchester United, is likely to leave the traditional club and therefore, a void.

Cunha just chose Hertha BSC Berlin as his new club in winter. Despite everything, there are already rumours about the striker. Inter Milan is said to have listed the Brazilian for years – and now the interest seems to be ridiculously huge.

Certainly, the reasons for this are Cunha’s latest achievements in the dress of the “Alte Dame”. In this tactical analysis, we will analyse Cunha’s role in the system of the German capital club. At the same time, this scout report is used for comparison with Inter’s superstar Martinez. Furthermore, this analysis shows how the Brazilian fits into Antonio Conte’s tactics.

Role in the system at Hertha BSC Berlin

Under head coach Bruno Labbadia, Hertha BSC is lined up in a 4-2-3-1 formation. This helped to stabilize the defence and provides the team with a balanced position play. In this system, Cunha played on the left-wing predominantly. Nevertheless, he has much free space to fill. As you can see in the map below, he plays centrally. Therefore, he changes positions with his teammates in the offensive line. Especially his connection with the two strikers Krzysztof Piątek and Vedad Ibišević should be mentioned here. Often, they drop deep to provide space for Cunha when in advanced positions. 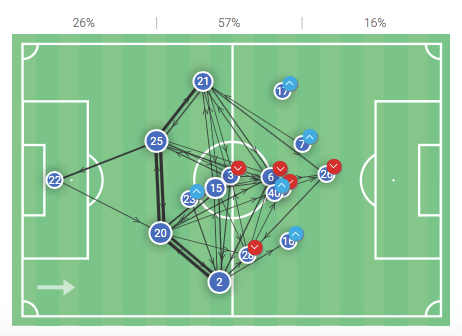 Labbadia´s precursors Jürgen Klinsmann und Alexander Nouri lined their team up in a 3-5-2 formation. There, Cunha played as one of the two forwards in front of the five-men midfield. Again, his link-up play with Piątek was extremely important for Hertha´s tactics as Cunha dropped a bit deep and Piątek played in a more advanced position during the match. 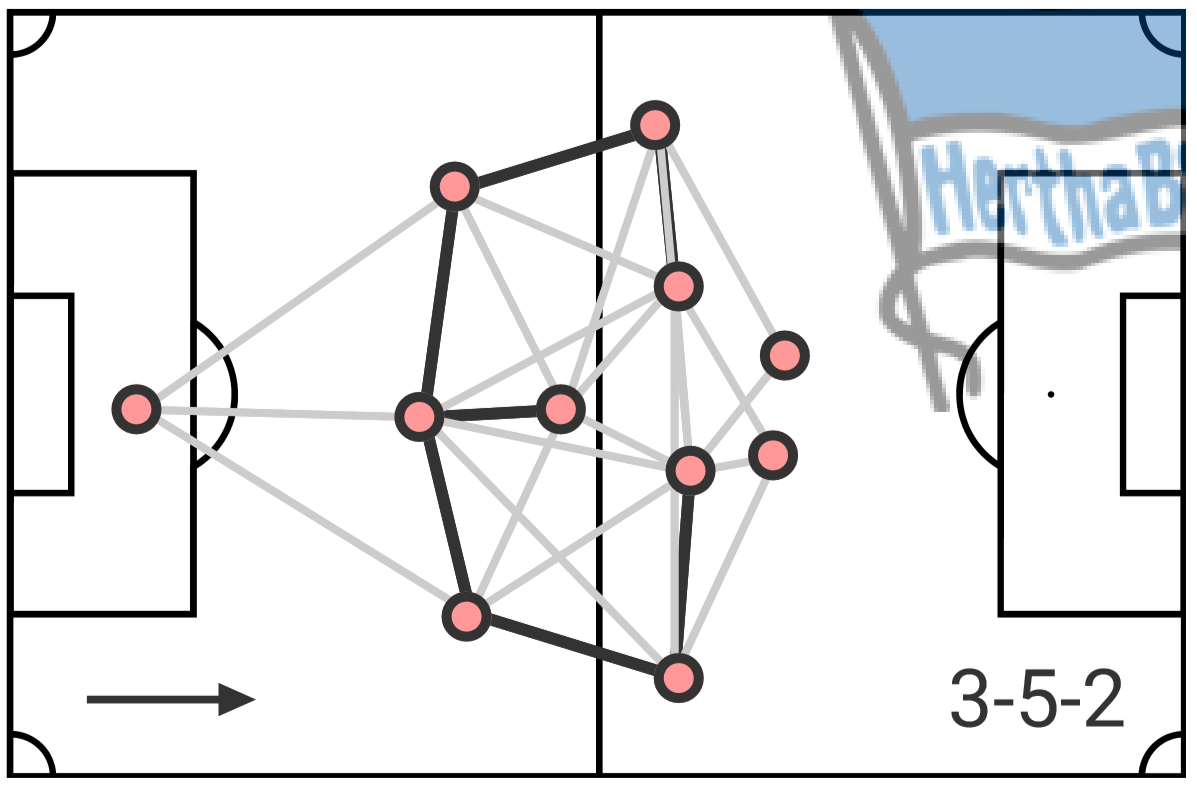 Role in the system at Inter

That is why Cunha might have no problem with the system Inter play under Conte. The Italian head coach lines up his team in a 3-5-2 as well. At the moment, Lukaku and Martínez play as the two forwards and their link-up play is one of the best in elite football. With Martínez looking almost certain to move on from Inter this summer, Cunha seems like the obvious replacement. Therefore, he could come in to play Martínez´ role as a wide forward in Conte’s 3-5-2 shape. 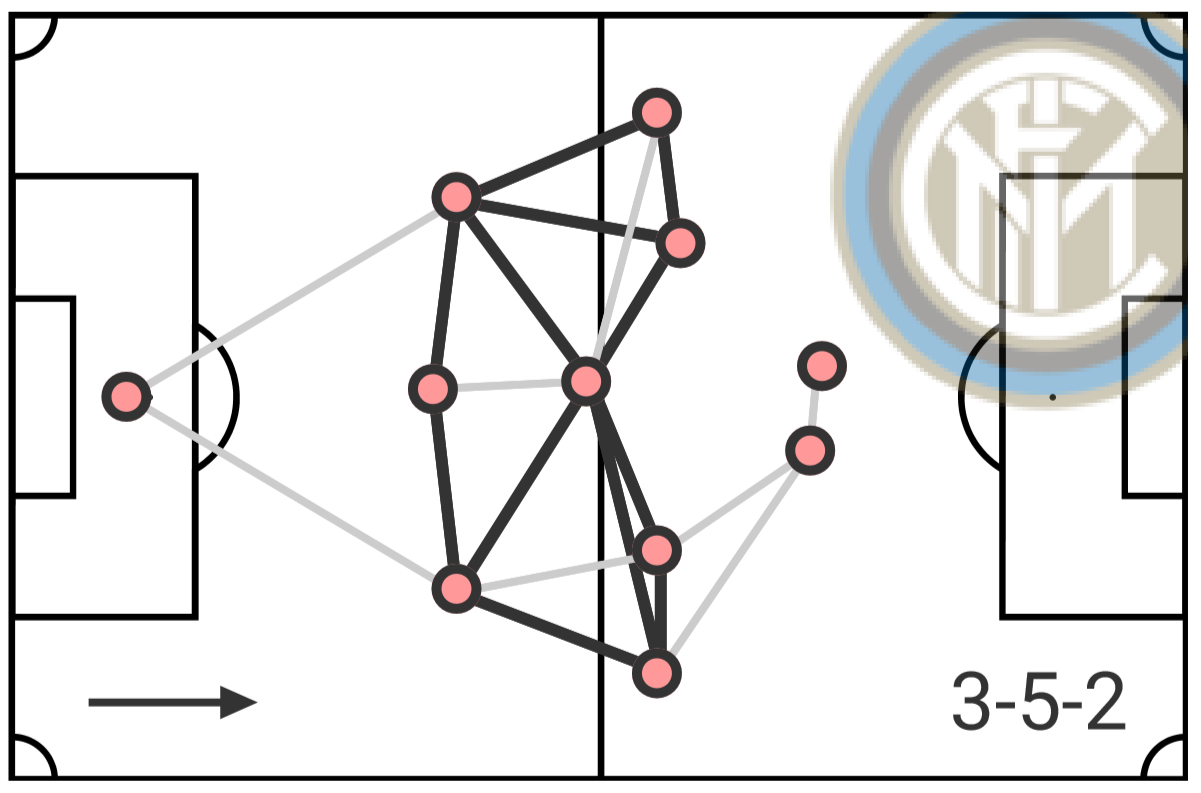 Besides Martínez´ and Cunha´s offensive roles in their teams´ systems, they help in the build-up play. Therefore, they are very active and drop deep into spaces between the opponent´s offensive and midfield line. Then, when they receive the ball, they have time and space to turn and initiate an attack with their brilliant overview and technical ability.

In the following image, Martínez drops deep in between the opponent´s offensive and midfield line to receive the ball in Inter´s own half. 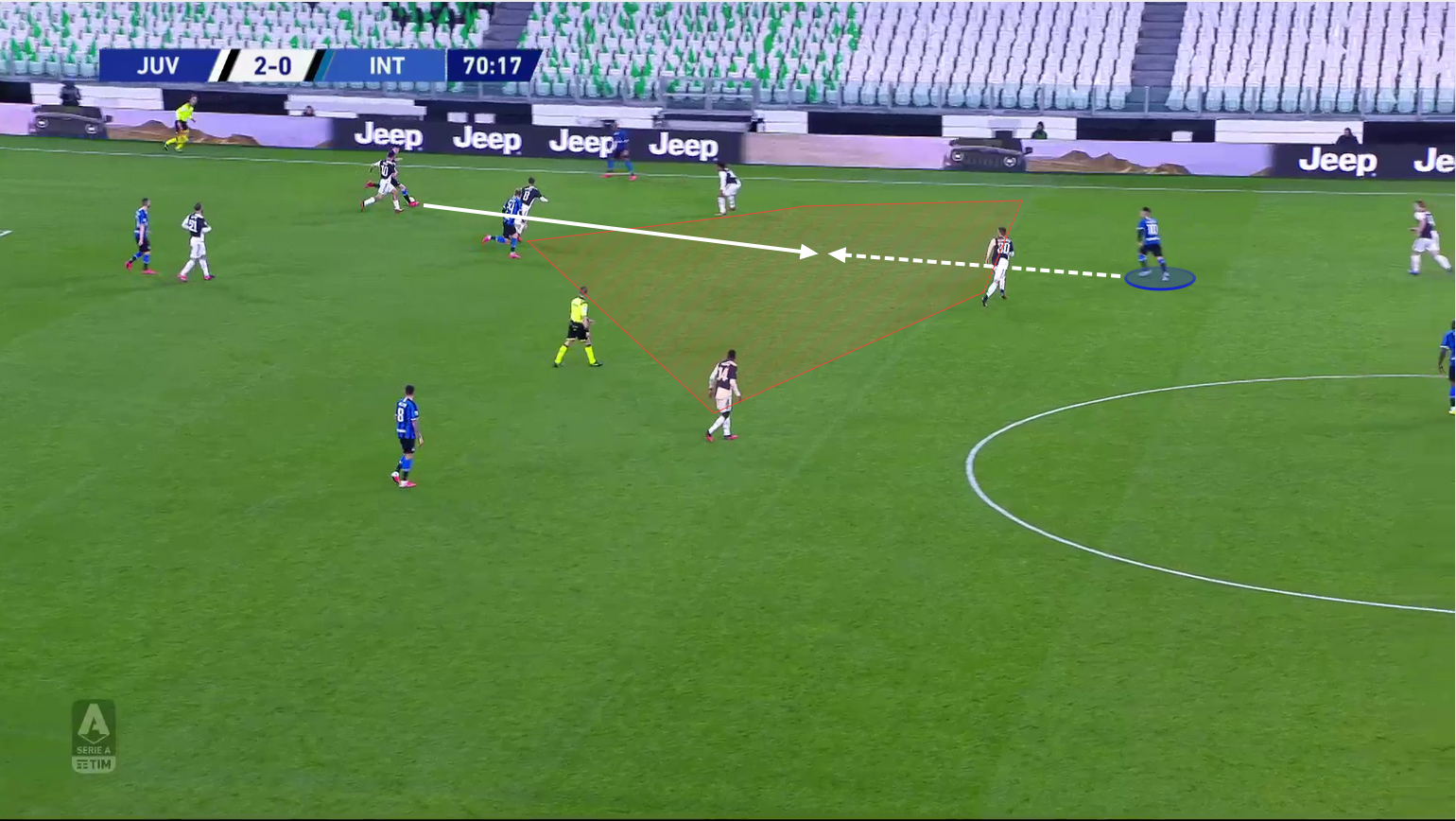 Afterwards, he can use the space and time to find an efficient passing option like in the example below as he is playing a long-range pass in behind the defence to set up Lukaku. 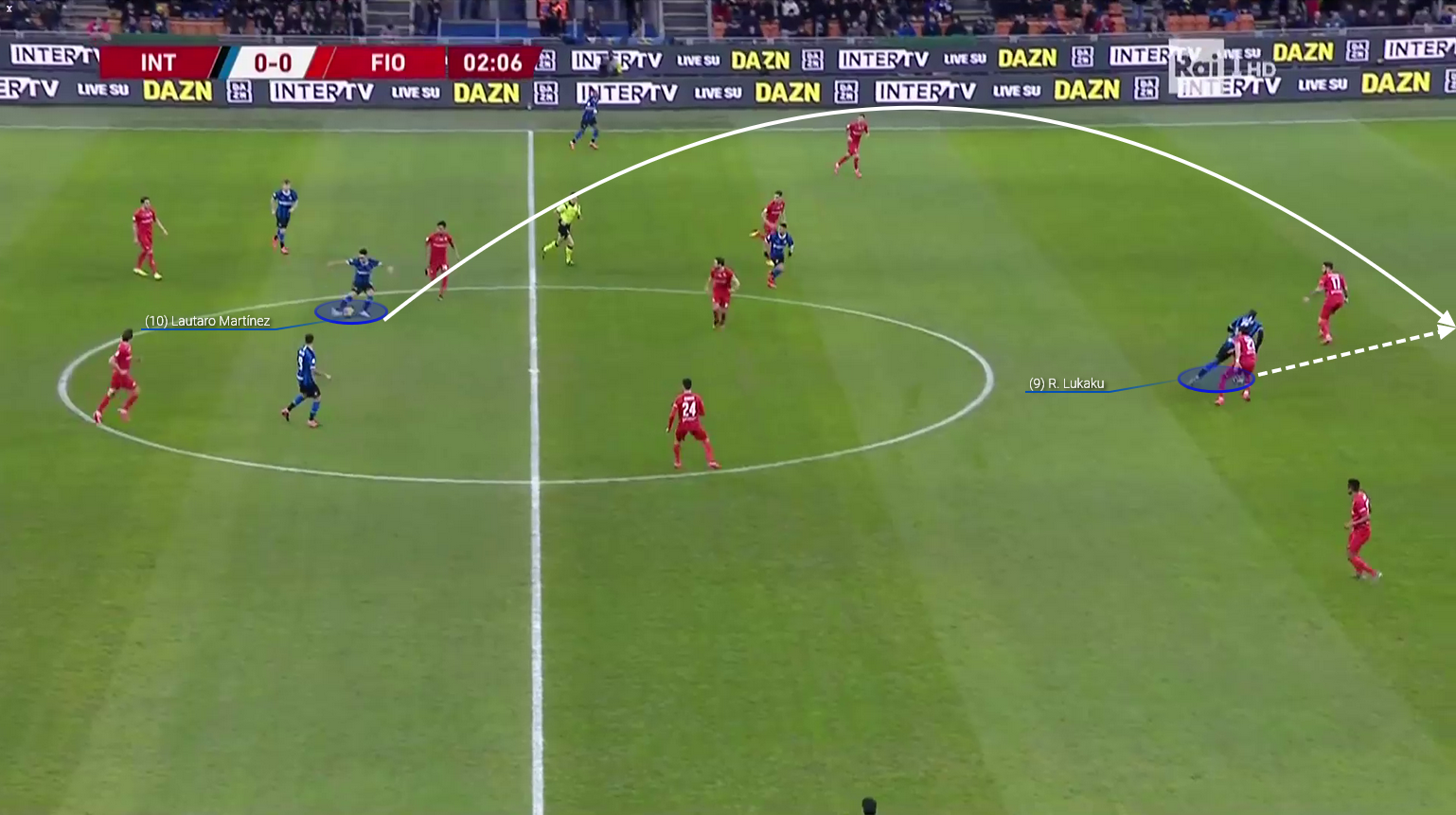 Cunha is used to making this kind of movement as well. In the example below, he drops very deep between the opponent´s offensive and midfield line to help in Hertha´s build-up play. 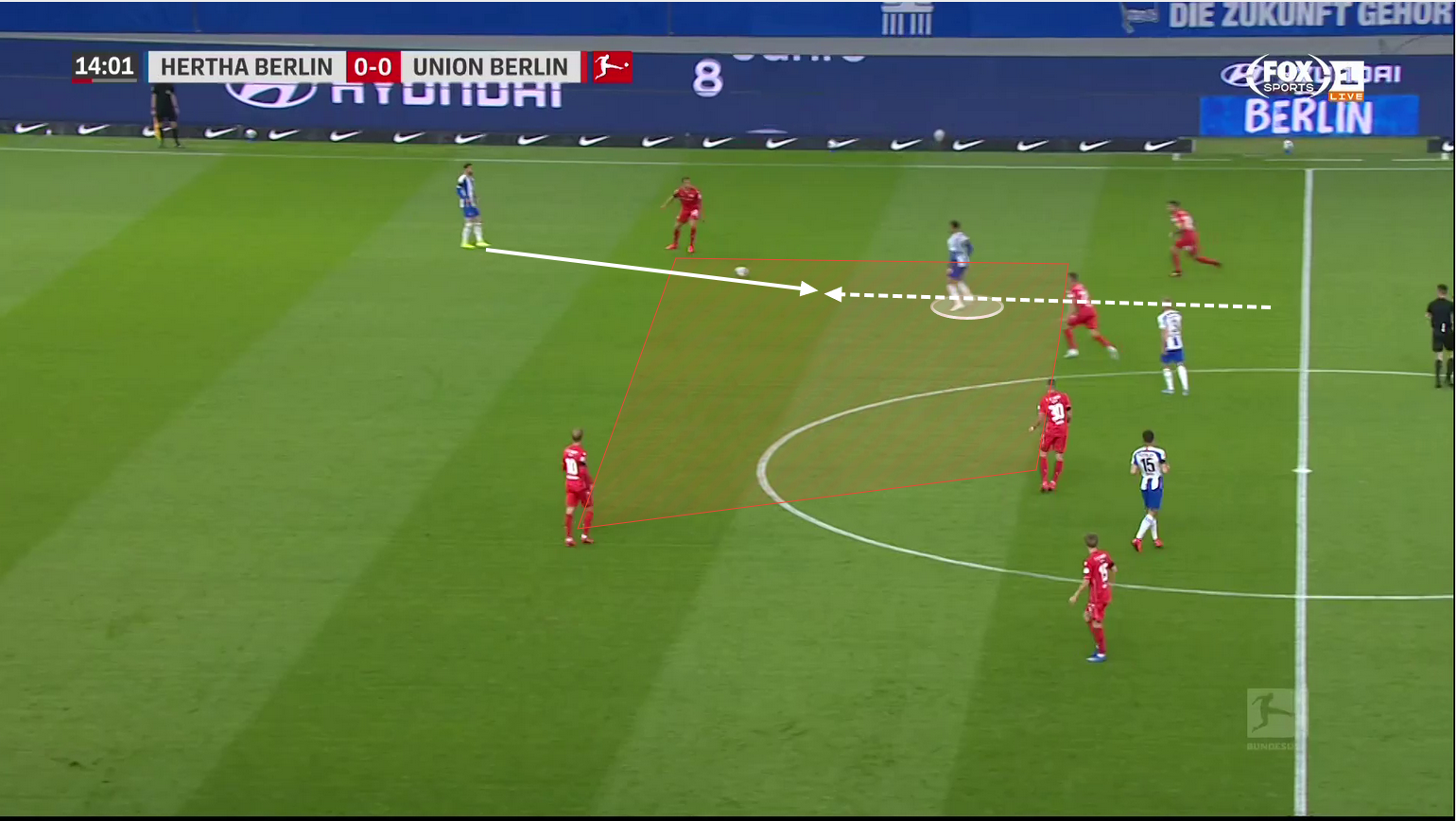 In the next image, we can see Cunha playing a similar pass in behind the opponent´s defensive line out of his deeper position on the pitch. 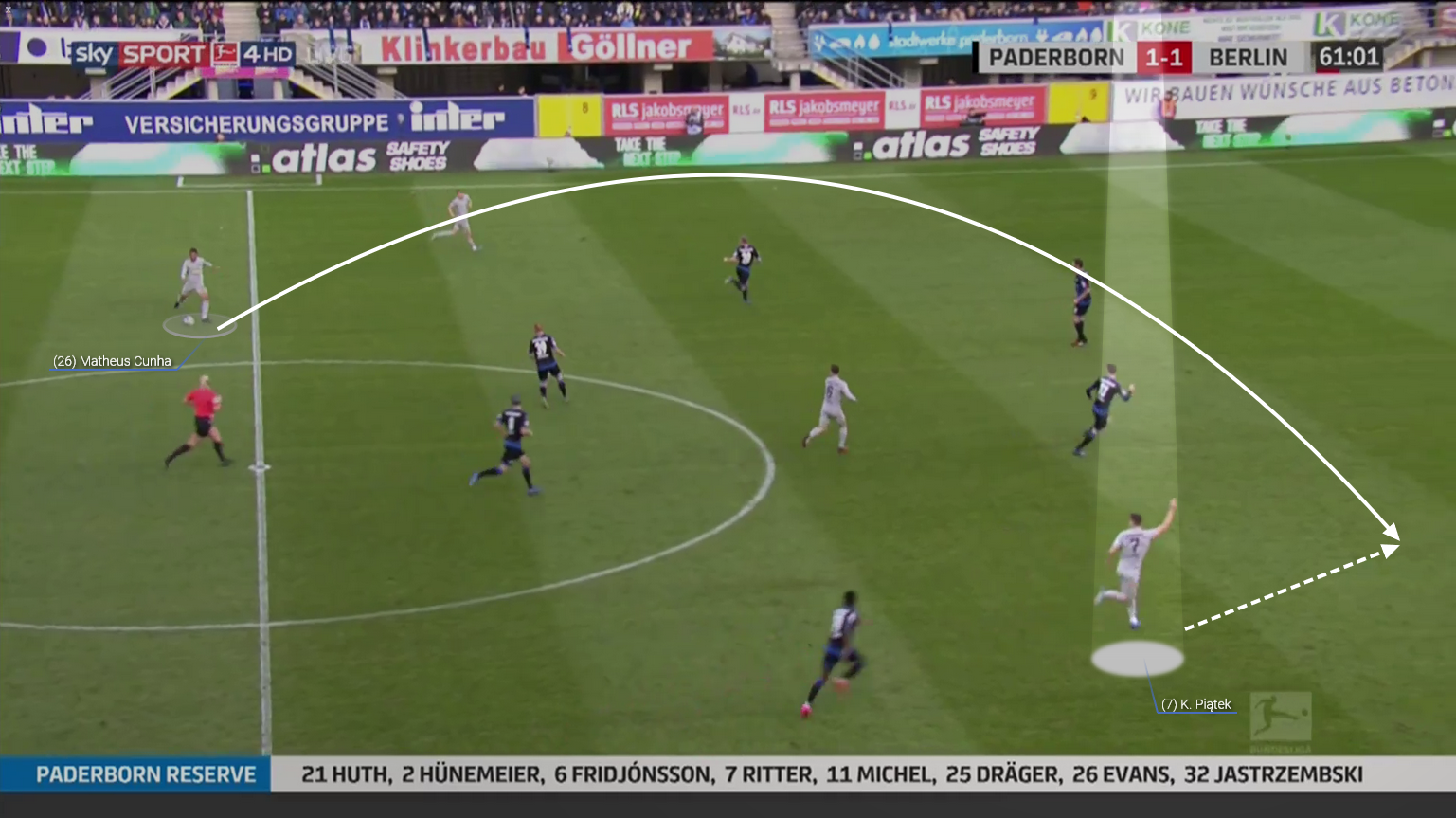 Both players are the playmakers in their system playing like a false 9 as a hybrid out of a striker and a central offensive midfielder. By dropping deep, they open up spaces in the opponent´s defensive lines which their offensive teammates can use to get into an advanced position. Knowing about their technical ability, their teammates are looking for Cunha and Martínez to provide passing options during the whole match. In fact, most of Inter´s attacks are initiated by Martínez whereas most of Hertha´s attacks are initiated by Cunha.

The young Brazilian loves to attract several opponents to provide space to his teammates. Once, his teammates recognize the free space and start a run to fill them, Cunha plays a smart and well-timed interface pass to break the opponent´s defensive line. 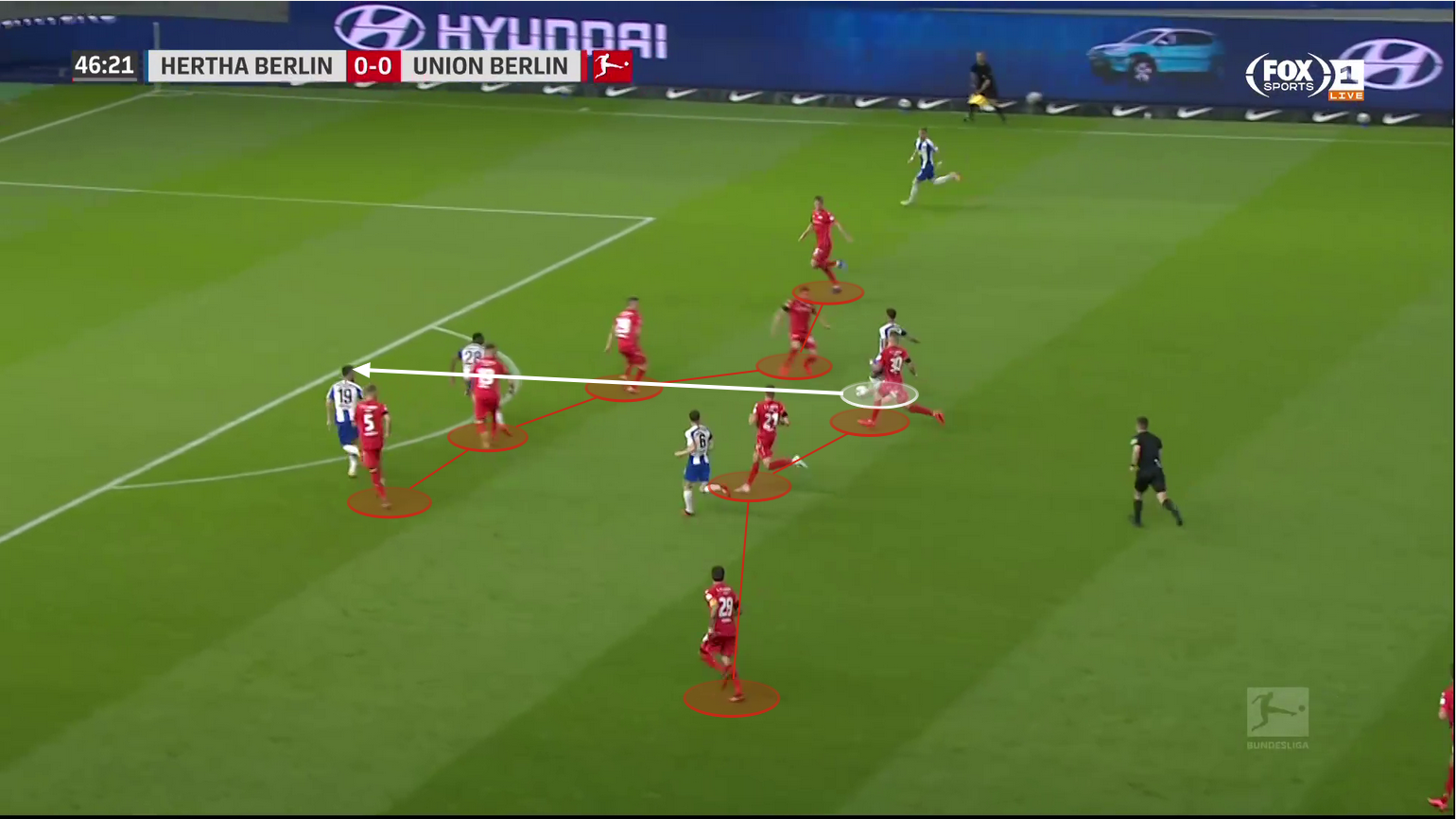 Even if Cunha is facing the opponent´s midfield line as it is the case in most counter-attacks like in the image below, he has the composure and the overview to play a perfect-timed interface pass. So, he breaks the midfield line as well as the defensive line with just one pass. 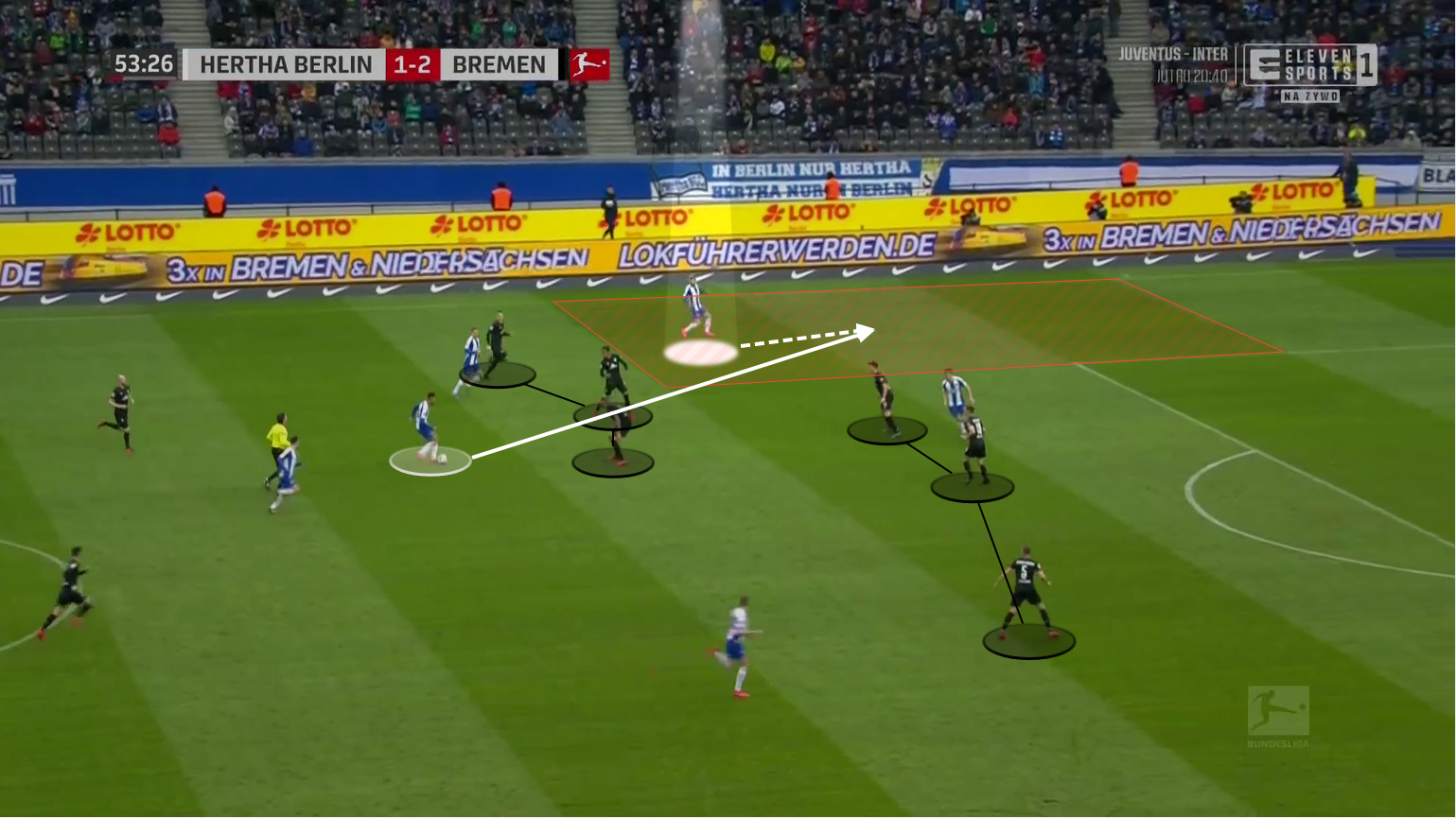 Even in situations in which Cunha has not much space and time on the ball, he uses his technical ability and his overview to create a goal-scoring opportunity for his team. In the image below, he plays an interface pass into free space within the opponent´s penalty box using a chip-ball. This is a procedure, not many players can initiate as not many players are that technically gifted. 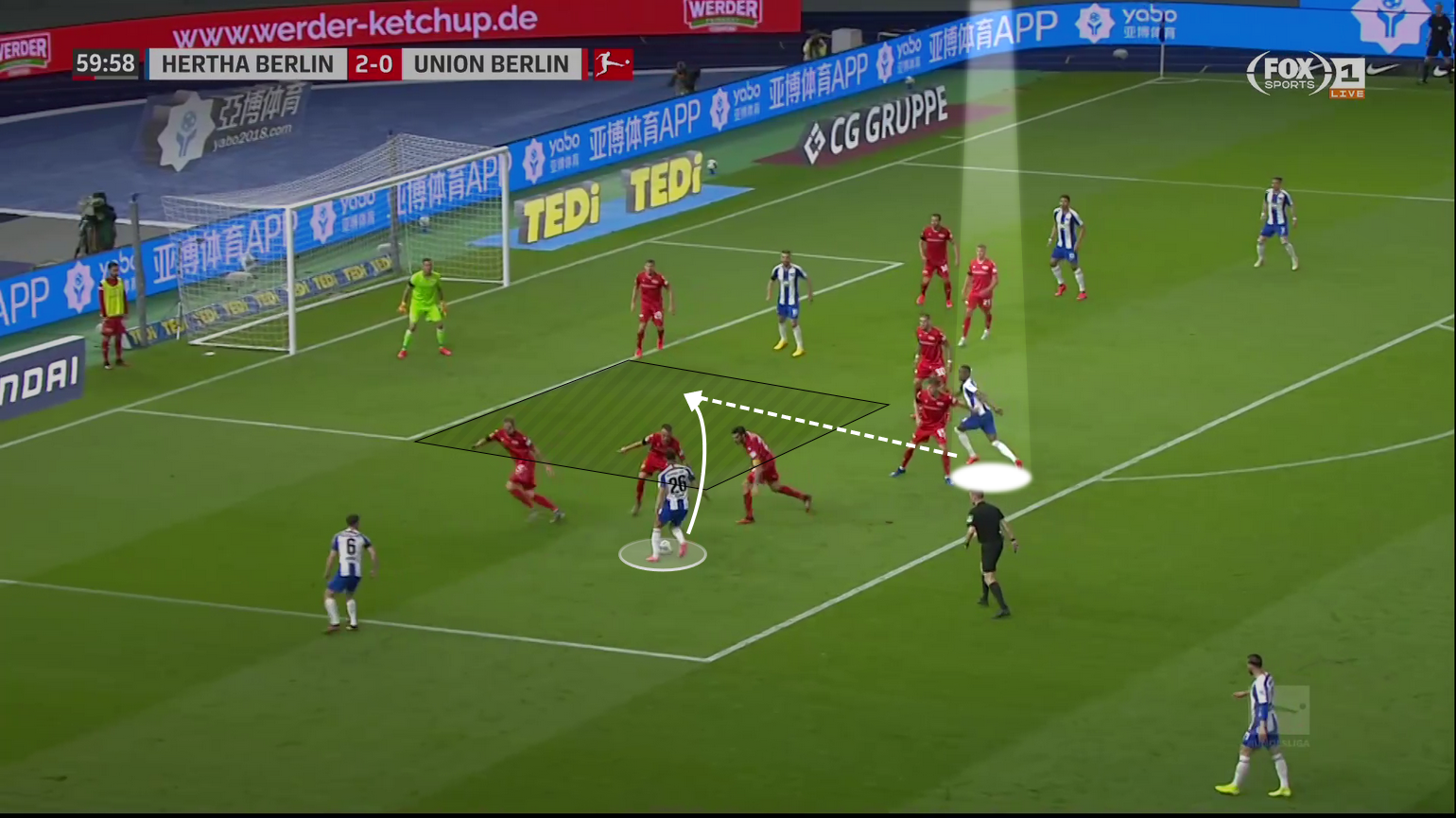 However, that pass reminded me of a pass made by Martínez some months ago in a similar situation. The Argentine had not much space and time on the ball but used his overview to chip the ball into a dangerous area within the opponent´s penalty box. Here, you can recognize the similar playing style both are used to play. 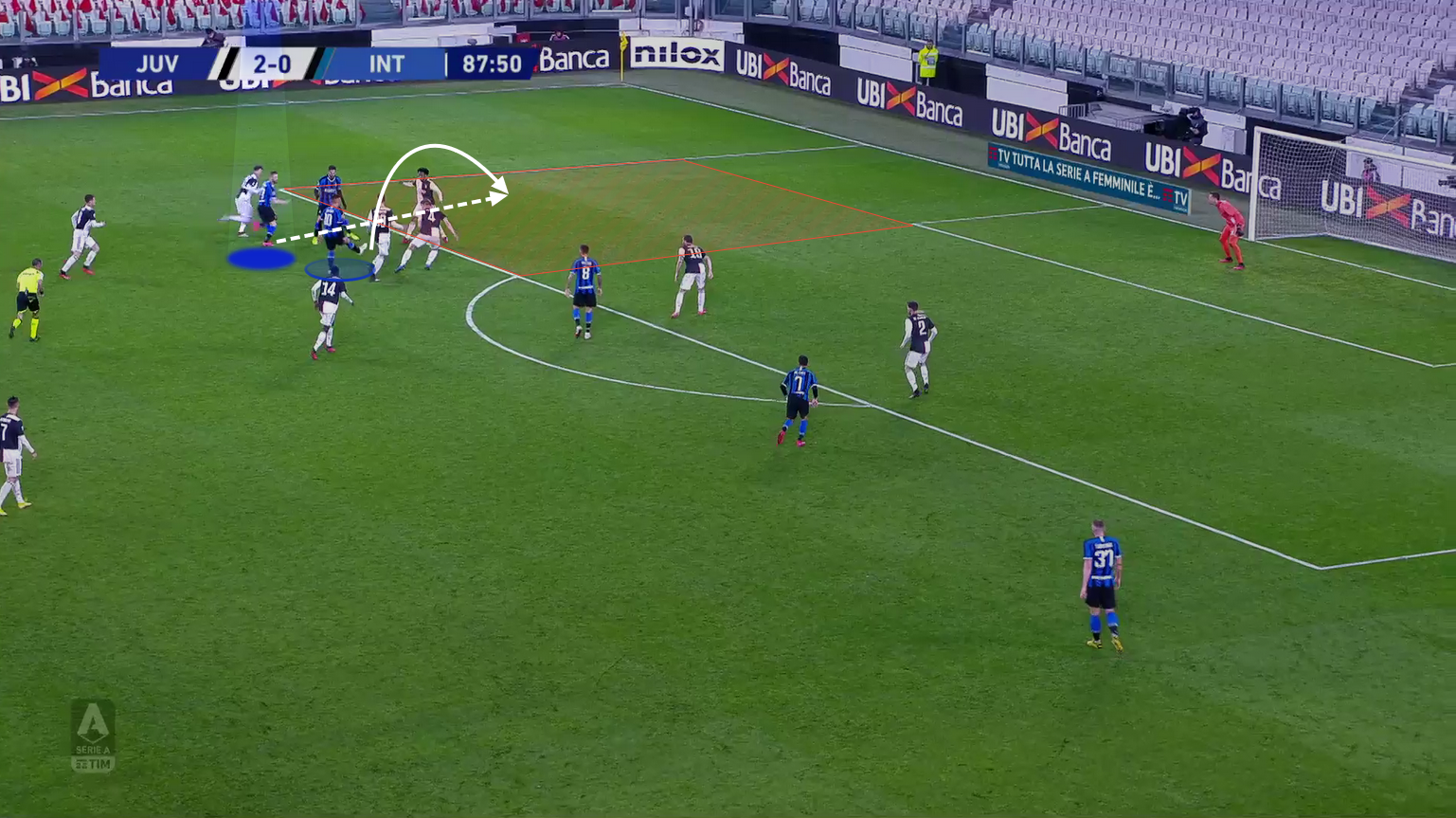 As already mentioned, Martínez´ link-up play with Lukaku was an essential factor for Inter´s success in the 2019/20 season. This is a regular feature in Conte’s system, with the midfield three in this 3-5-2 system often staying deep due to the structure of the formation, the two-striker formation allows for combination opportunities in the higher areas of the pitch. Out of possession, they are able to provide options for one another, while trying to look to break forward or look to hold up play until the rest of the side has had the time to move forward. In possession, the two upfront work together and take care of the other’s movements as they look for space.

Martínez has thrived in this system this campaign and Inter have reaped the rewards of it. Between him and his usual partner in Romelu Lukaku, they have amassed 42 goals and 10 assists for the Italian side and therefore they were involved in 52 goals directly. On top of these numbers, they are constantly involved in the build-up to about every goal Inter score, with and without the ball.

In the image below, you can see that both outstanding forwards are on their own. This is the case in such situations as Inter´s transitions are extremely intensive for the midfield and the wing-backs who, therefore, cannot contribute to every attack. That is why Martínez and Lukaku have to use their link-up play to create a goal-scoring opportunity. Often, Martínez is more a kind of assistor and Lukaku the player who looks for a shooting option. On the other hand, Cunha practices that link-up play perfectly with Piątek or Ibisevic as well. However, since Cunha arrived in Berlin last winter and due to the pandemic, there were not many matches to prove this link-up play with numbers. Nevertheless, if you watch matches of Hertha BSC, you will see that the forwards connect brilliantly. In most situations, Cunha drops deep to receive the ball and plays an interface pass to Piątek/Ibisevic as you can see in the image below. 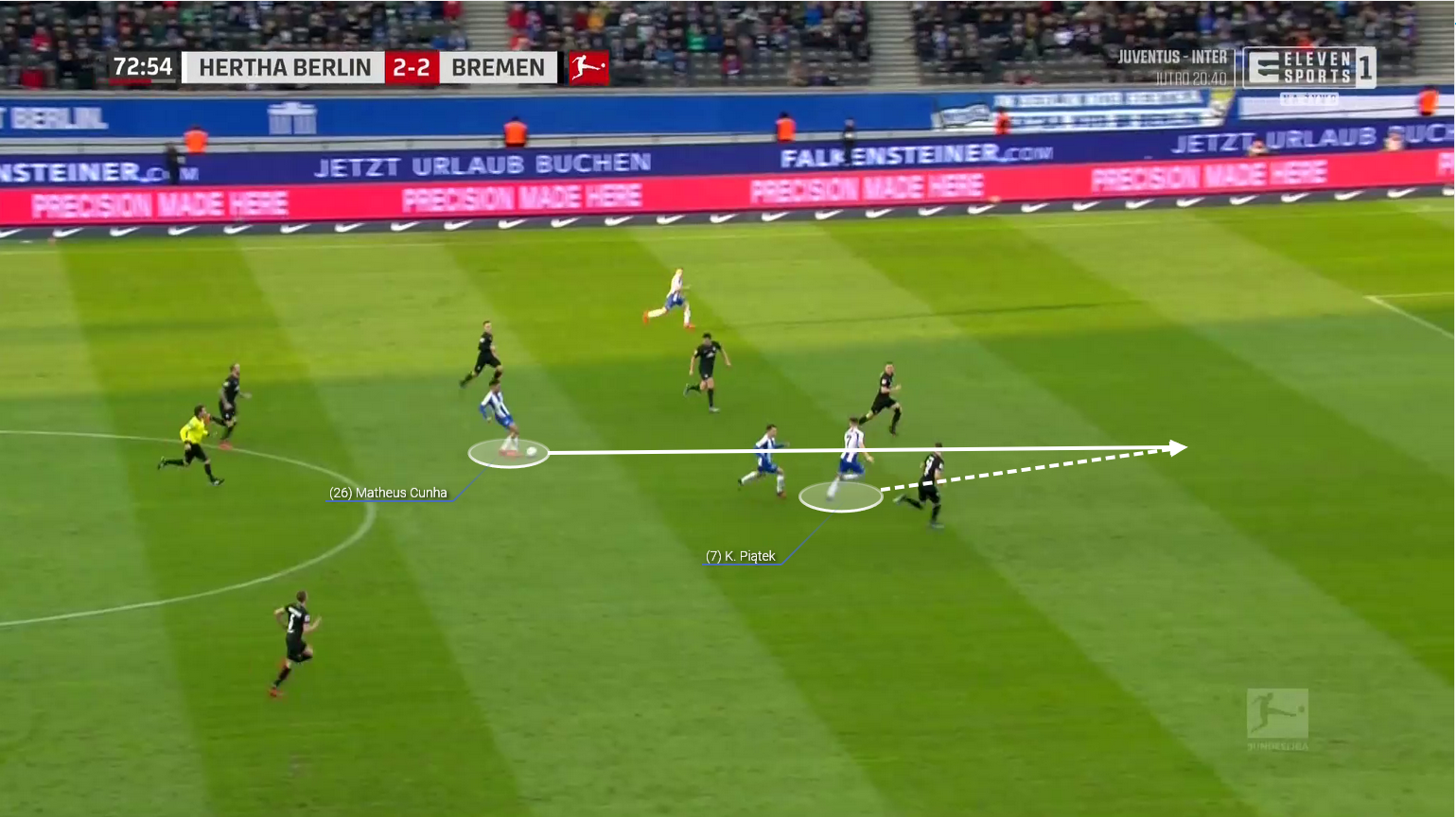 Both players are working very hard for their teams. In the maps down below, you can see their ball recoveries. It is outstanding that both have nearly the same amount of recoveries as Cunha won the ball back 102 times and Martínez 98 times. In fact, Cunha recovers the ball more often (4.44 per 90 minutes) than Martínez (2.74 per 90 minutes).

Their work rate is another reason for their similar positioning on the pitch during the match. In the heat maps below, you can recognize both to position themselves in the same areas most of the time.

In the Bundesliga match against his former club RB Leipzig, Cunha showed another ability which might have convinced Inter to buy him as he played part in a five-man defensive line out of possession. So, even as Martínez will stay at Inter, Cunha could be an interesting player as an offensive-thinking wing-back. However, Cunha´s best position is in the front line or in a central offensive midfield position. 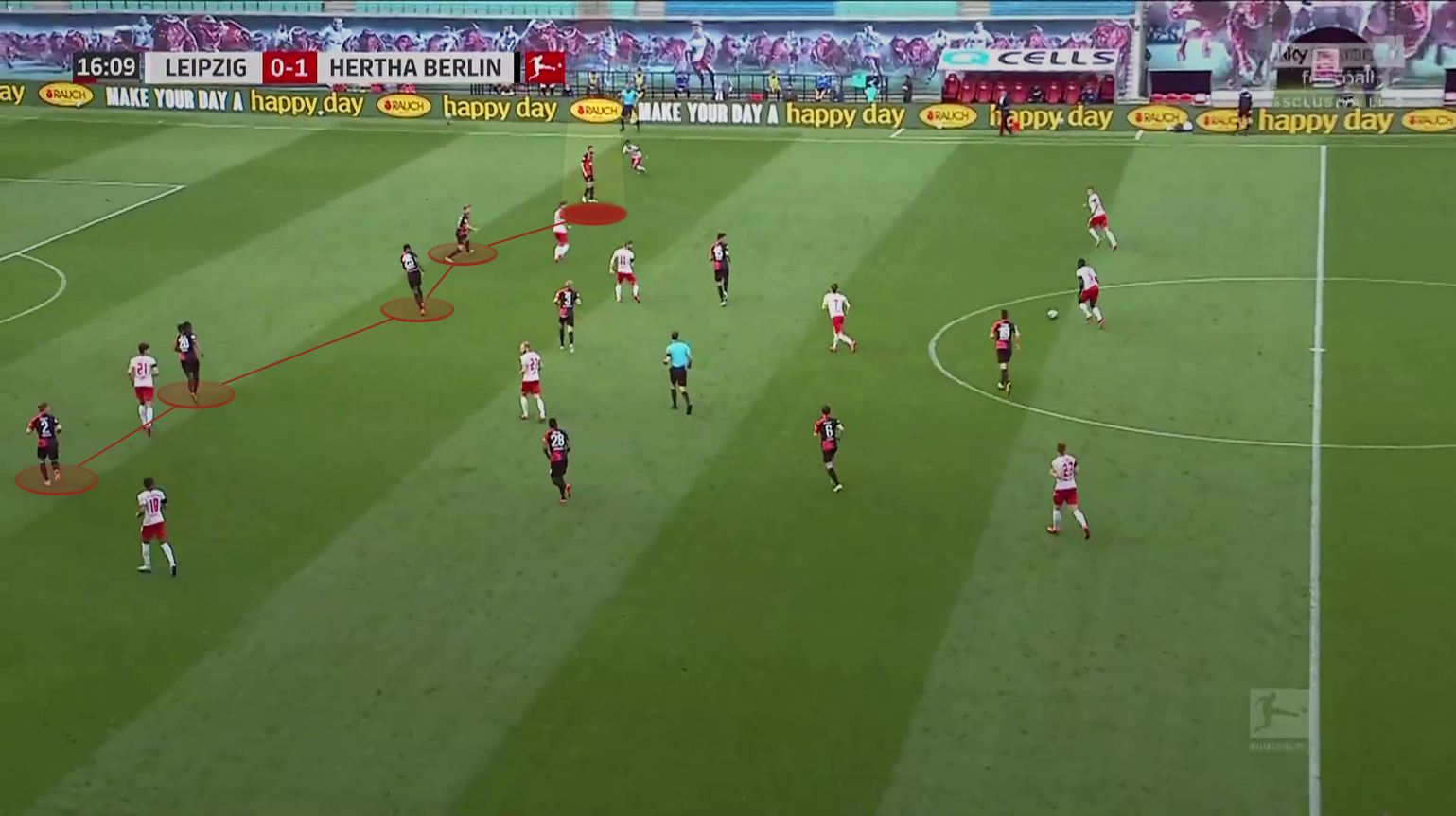 After taking a closer look at both players´ playing style, which is remarkably similar, you will see that their statistical profile is similar as well. Therefore, we will focus on their goal-scoring ability. Martínez has a lot more touches within the penalty area (6.2) than Cunha with 3.51. However, since Lukaku is typically forward with lots of touches within the penalty box as well, Cunha might give Inter more flexibility and opportunities in the attacking phase. Furthermore, Cunha is the Bundesliga player with most shots on target (4.44) and therefore, he sets the opponents´ goalkeepers more under pressure than Martínez. Concerning their xG and goals scored, both players have similar stats which is not surprising as we already recognized their similar playing styles. 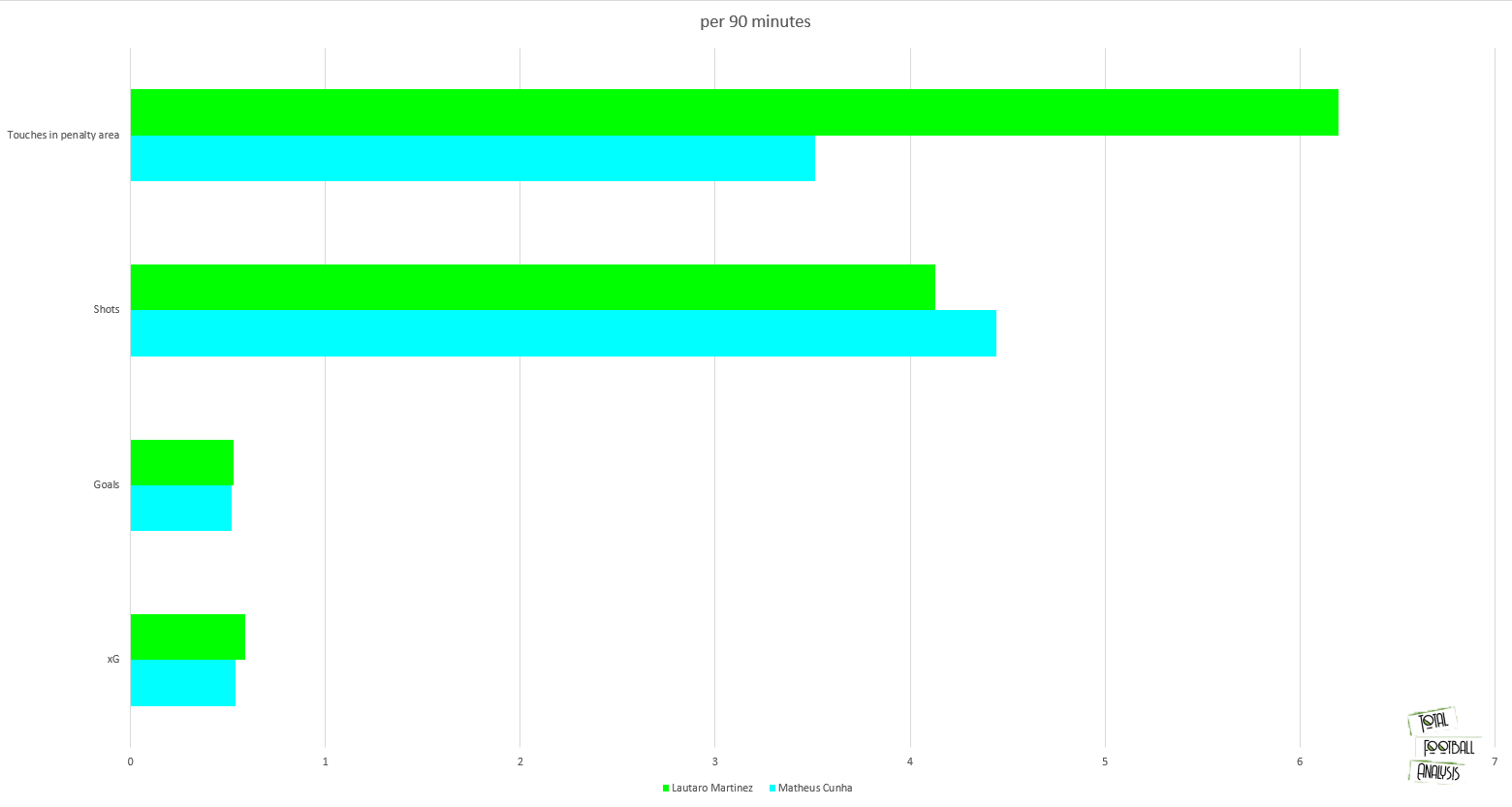 Cunha would definitely fit into the Conte system at Inter, but he would first have to get used to the new environment, the pressure and the link-up play with Lukaku. His stats are extraordinarily good and remarkably similar in comparison to the ones of Martínez.

However, there are some factors that are against a move to the club in northern Italy. Cunha just moved from RB Leipzig to league competitor Hertha BSC in January for a transfer fee of 18 million euros. In the capital city of Germany, he made an extraordinarily good start with four goals and two assists in his first seven matches. Furthermore, Hertha is not dependent on income from player sales due to the entry of investor Lars Windhorst and Cunha’s contract is valid until 2024.