When a teenager who has played fewer than 20 senior matches gets a lot of attention from top clubs and coaches, it is undoubtedly an indicator that he is an extraordinary player. Two coaches who play modern pressing football had been fighting for his signature in the summer, and in the end, Julian Nagelsmann won the battle against Marcelo Bielsa for the talented defender. RB Leipzig paid 16 million euros plus bonuses for the youngster and he became the biggest outgoing transfer for a defender from 1. HNL. Of course, he stayed on loan at Dinamo Zagreb because both RB Leipzig and Joško Gvardiol himself are aware that he needs more experience in senior football before stepping on the Bundesliga pitches each week.

In this scout report, we will try to present what Gvardiol has to offer and why he was in such demand in the summer. This season he is a crucial first-team player and he has started in all eight matches in the European competitions for Dinamo Zagreb. We will also mention how he would fit into RB Leipzig’s tactics in the future and areas where he could potentially improve.

We will start this tactical analysis with the player overview section.

Gvardiol is an 18-year-old defender who is 185 cm tall. He is left-footed and his natural position is centre-back. However, the young defender is also capable of slotting in the left-back position and that’s where he spent most of the current season because Dinamo’s main option Marin Leovac had issues with injuries and fitness. We can see on his heatmap where he mostly performed his actions. 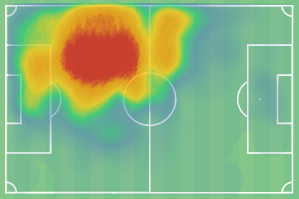 Even though he mostly played as a left-back we can see a lot of his actions in the half-space position from where he often makes progress towards the opponent’s goal. Knowing that RB Leipzig play with a three-man defence, it is natural to expect Gvardiol competing for the left centre-back position which is where he feels most comfortable. He is already on a high physical level, showing both strength and pace with good aerial ability. If we add that he has a high level of aggression and reads the game well, he is ideal for high pressing systems.

Gvardiol compared to U21 defenders in top five leagues

In this section we will compare Gvardiol to the U21 defenders from top five leagues with at least 400 minutes played this season. We used both centre-backs and full-backs for this comparison because Gvardiol played both positions this season. In the scatter graph below we can see defenders compared through two metrics: successful defensive actions per 90 and PAdj interceptions. 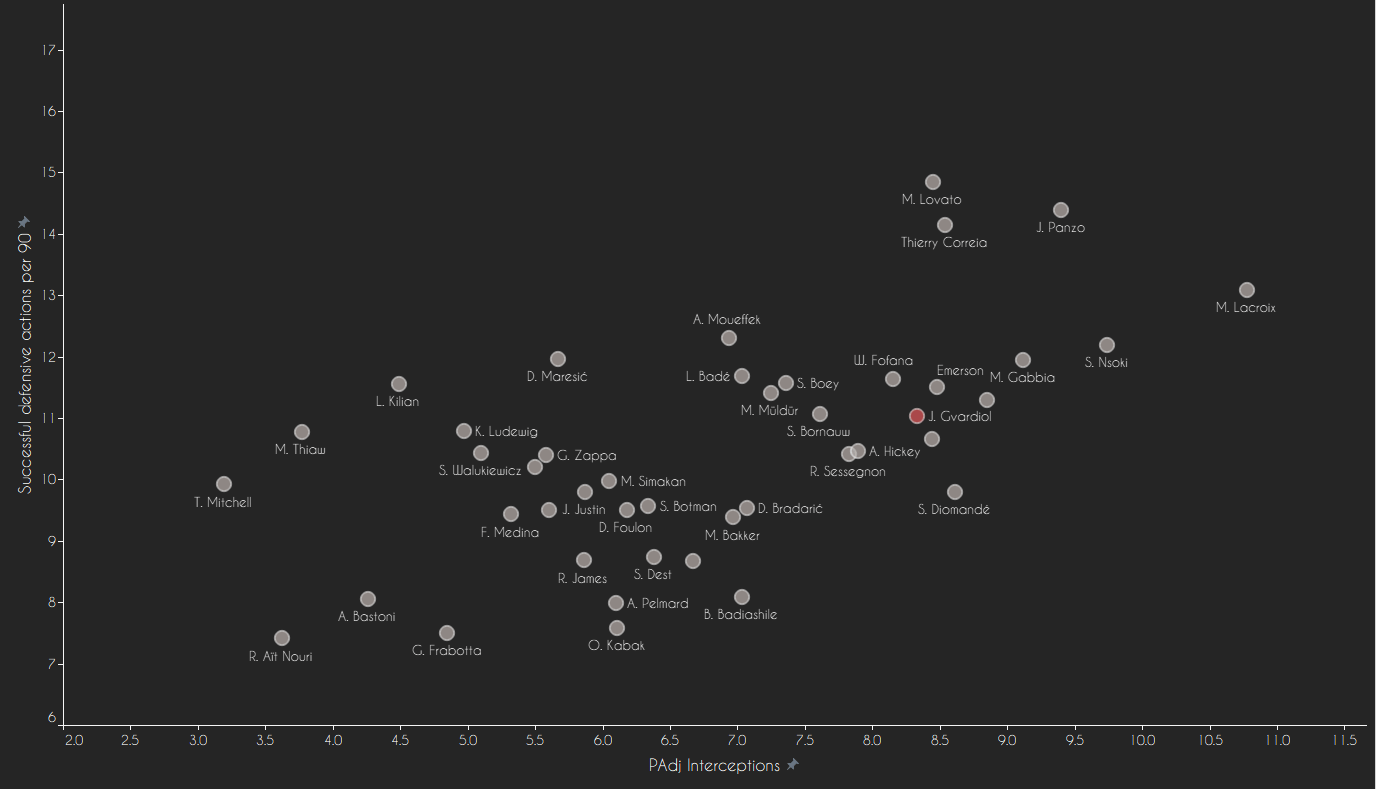 Gvardiol is marked with the red dot and he looks really good in both metrics. He is similar to Wesley Fofana who made a good start in the Premier League at his new club Leicester City. There is of course the difference between the quality of the leagues, but the data accounts for European competitions as well where Gvardiol played most of his games this season. He made 11.04 successful defensive actions per 90 and averaged 8.33 PAdj interceptions. These numbers show that he is active in the defensive phase and that he reads the game well. In the next graph, we will take a look at his aerial and defensive duels success rate to determine how he copes with opposition players. 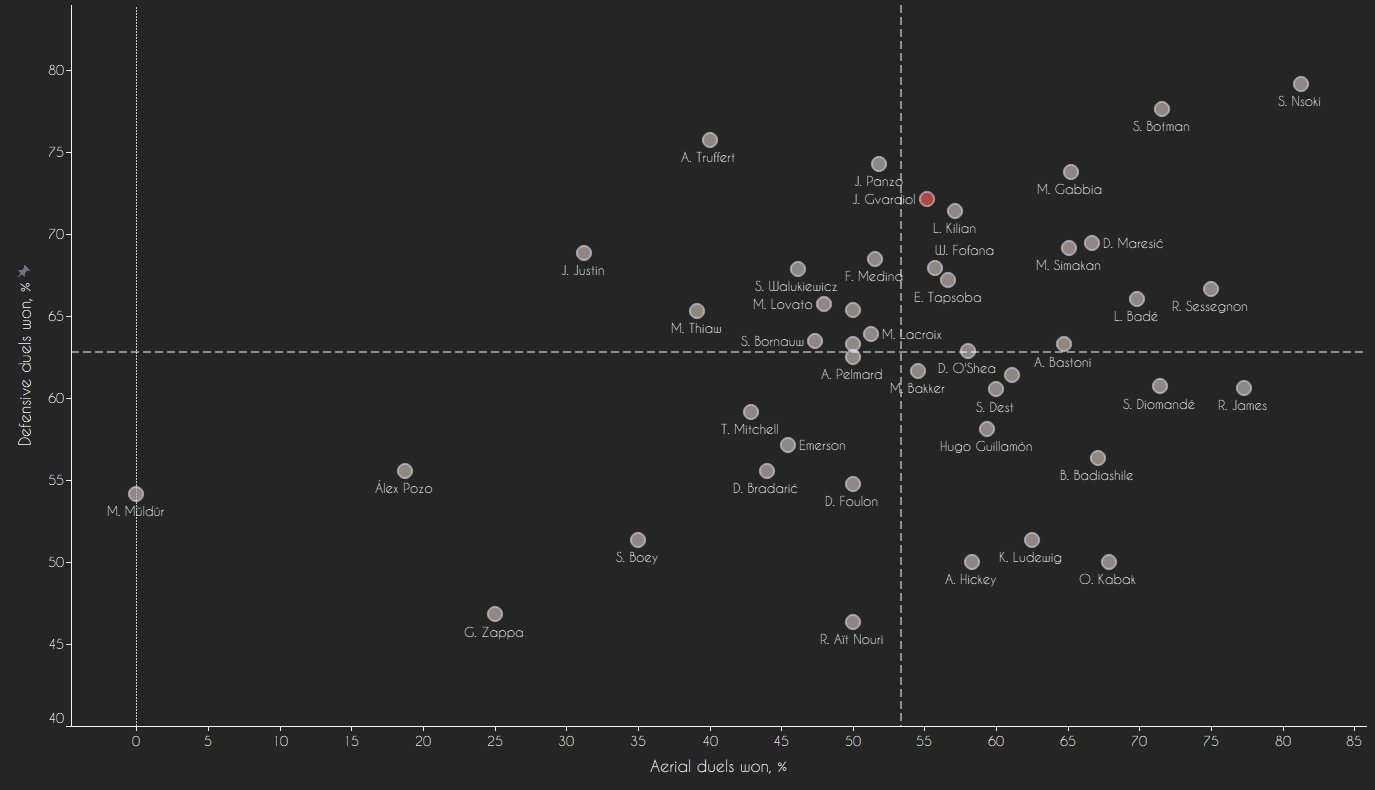 As we can see Gvardiol is above average in both metrics. His aggression and timing are the qualities which allow him to have 72.13% success rate in defensive duels, which also ranks him 6th compared to the other U21 defenders. Gvardiol wins 55.17% of his aerial duels which is just above the average and even though we will mention that he has quality heading, his positioning before aerial duels is something he could work on to be even better in the air.

The last scatter graph we will evaluate before going to the pure tactical analysis consists of progression data. With progressive runs and progressive passes per 90, we will see how big of an impact he has in the team’s build-up play. 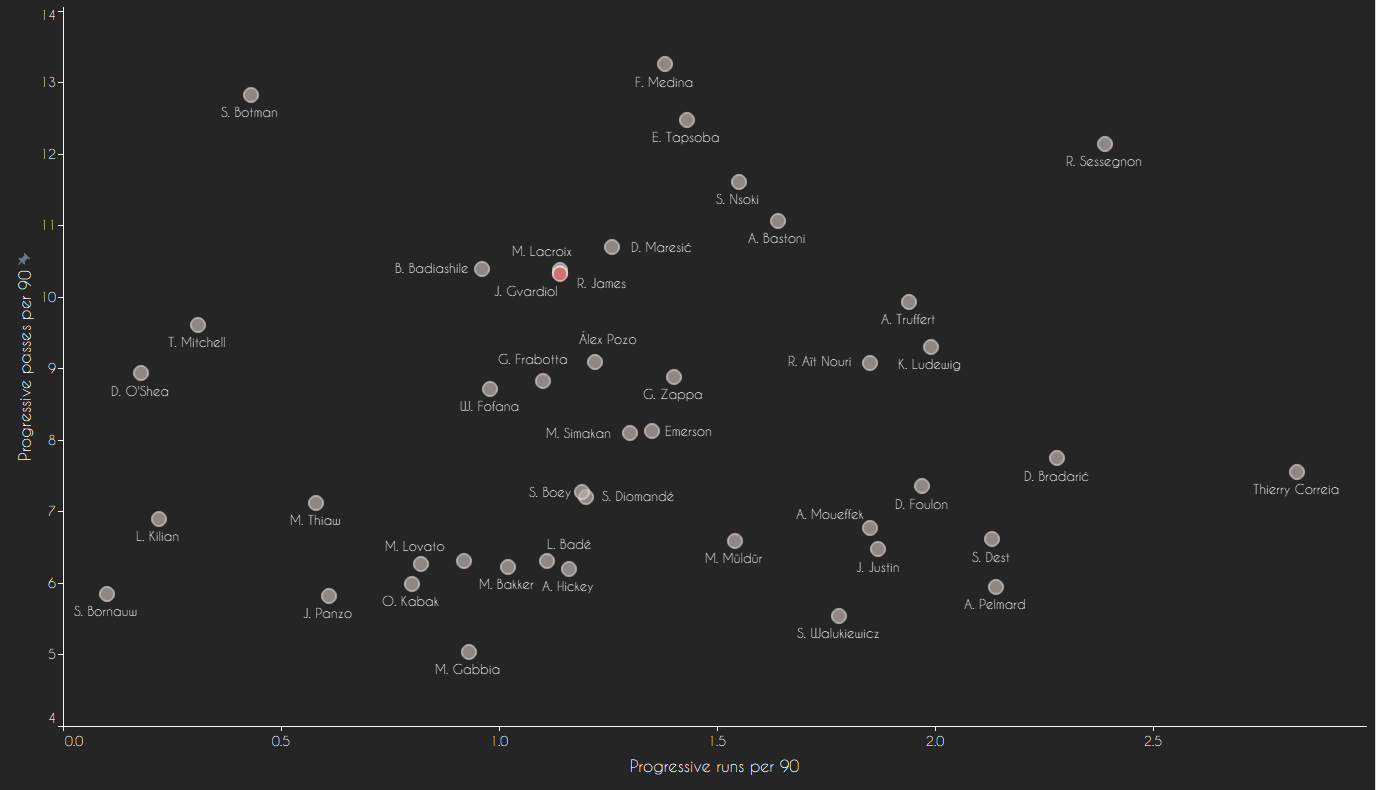 Gvardiol is positioned very high in progressive passes, attempting 10.32 per 90 with an accuracy of 73.87%. His ball-playing skills are surely something that got the attention from top clubs’ scouts. He makes 1.14 progressive runs per 90, which we predict will rise over time. He overlaps on this graph with Reece James and Maxence Lacroix who are both playing an important part in their teams’ build-up.

Because ball progressing is something that is needed from a modern centre-back, next we will evaluate Gvardiol’s impact in that area.

Gvardiol possesses great vision and plays firm, precise passes. These qualities are in demand especially if you are a left-footed centre-back. Not only does he make the build-up faster, but also his teammates know that when he has the ball they can make runs behind the defence because he has the ability to find them in those positions. Below is one example where he attempts a chipped ball over the defence. 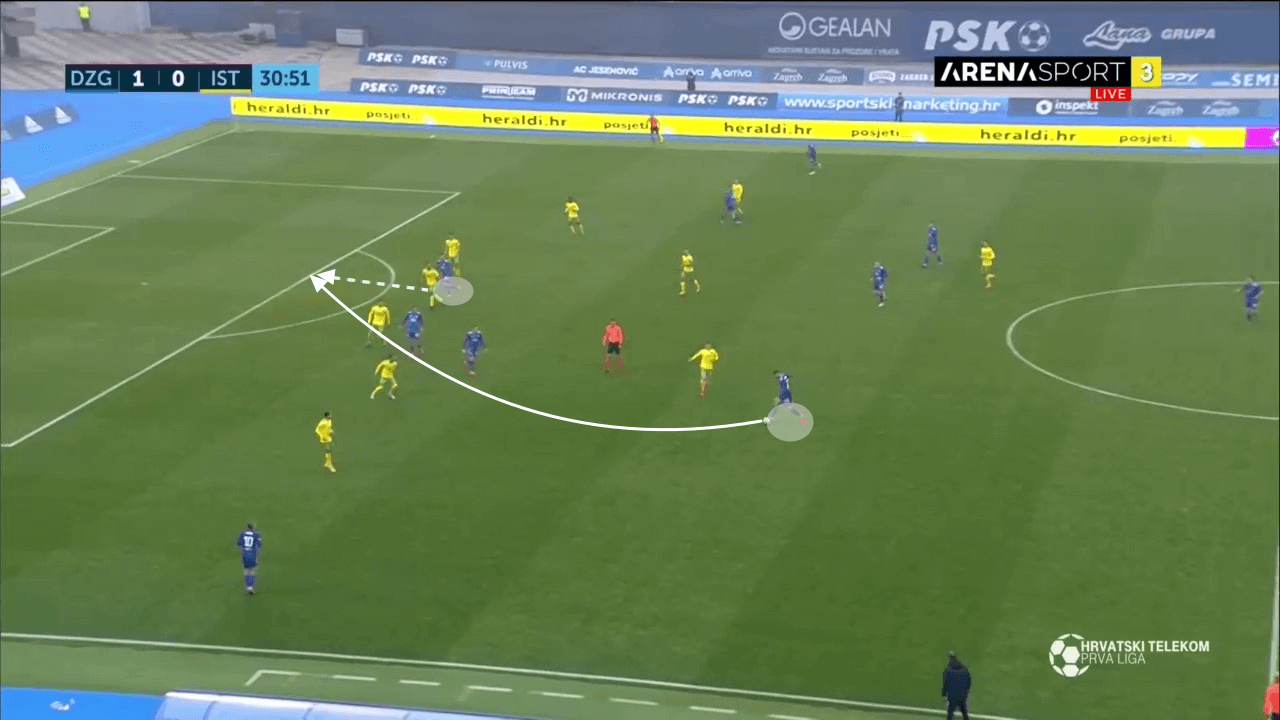 Gvardiol received the ball in the middle third and made a short run forward. At the same time, his teammate made a run towards the defence to signalise that he wants the ball behind the backline. Gvardiol saw his teammate’s run and has enough confidence in his passing ability to attempt that pass rather than playing wide in this situation.

Speaking of his great self-confidence when in possession of the ball, the young defender is press resistant and showing calmness at such a tender age. We will rarely see him clearing the ball blindly when he has possession because he always looks for an open teammate. The example below shows how he thinks under pressure in most situations. 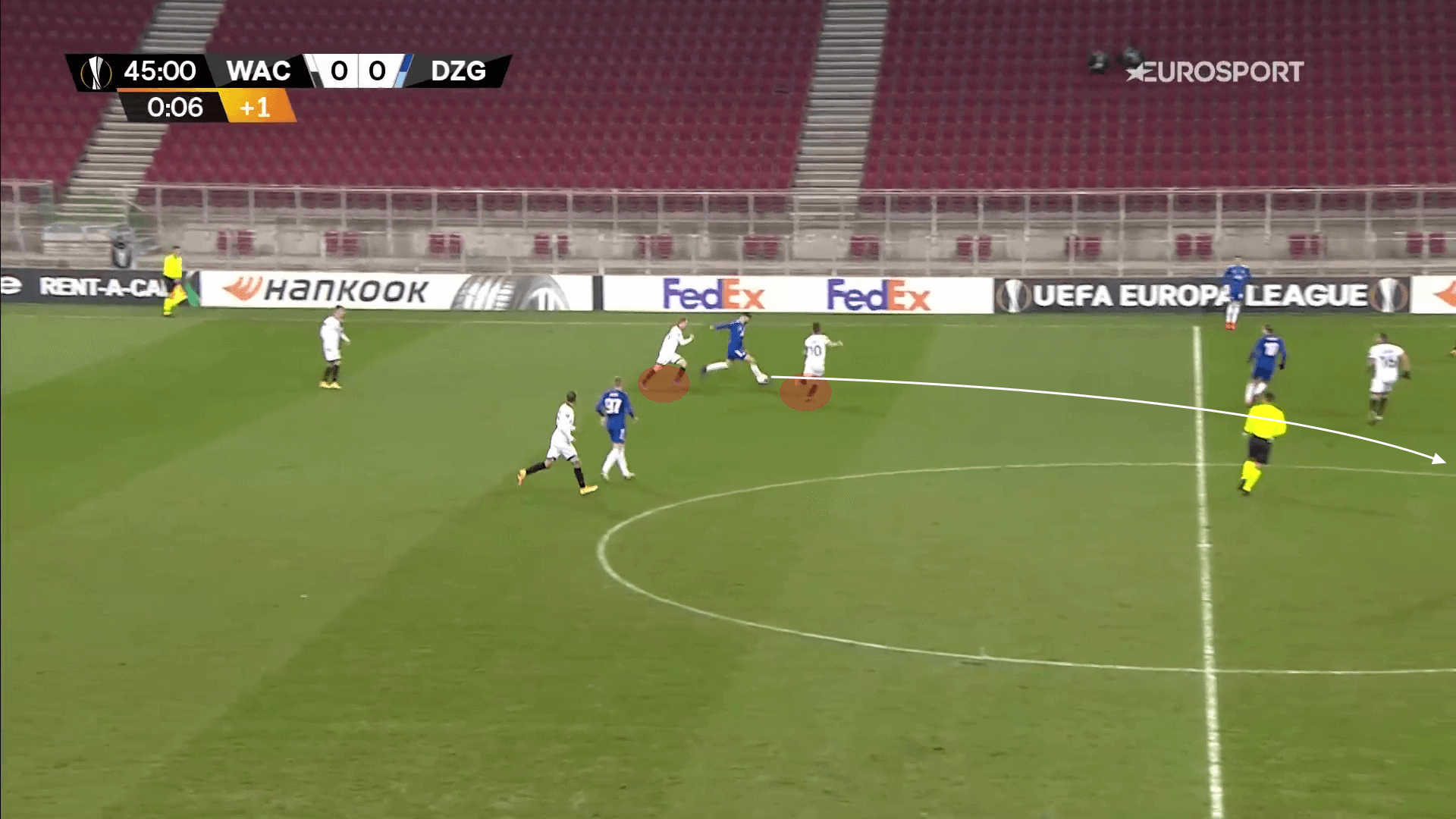 Above, Gvardiol had made a run from the left side towards the middle, getting around one player and shortly after that, a second opposition player arrived to close him down. We can see that behind him is the player he bypassed but he is still trying to recover and push Gvardiol. Even though he is pressed by two players, he keeps his composure and attempts a successful progressive pass towards his centre-forward. What is important here is that he is aware that if he played to the left or to Lovro Majer (the number 10 in front of him), he wouldn’t make such an impact with this action. However, making a pass towards the centre-forward takes out five opposition players and shows that he made a quality decision.

We already said that his teammates know that they can expect quality passes from him and below is another situation which will support that. In this situation, Gvardiol’s long-range passing is on point. 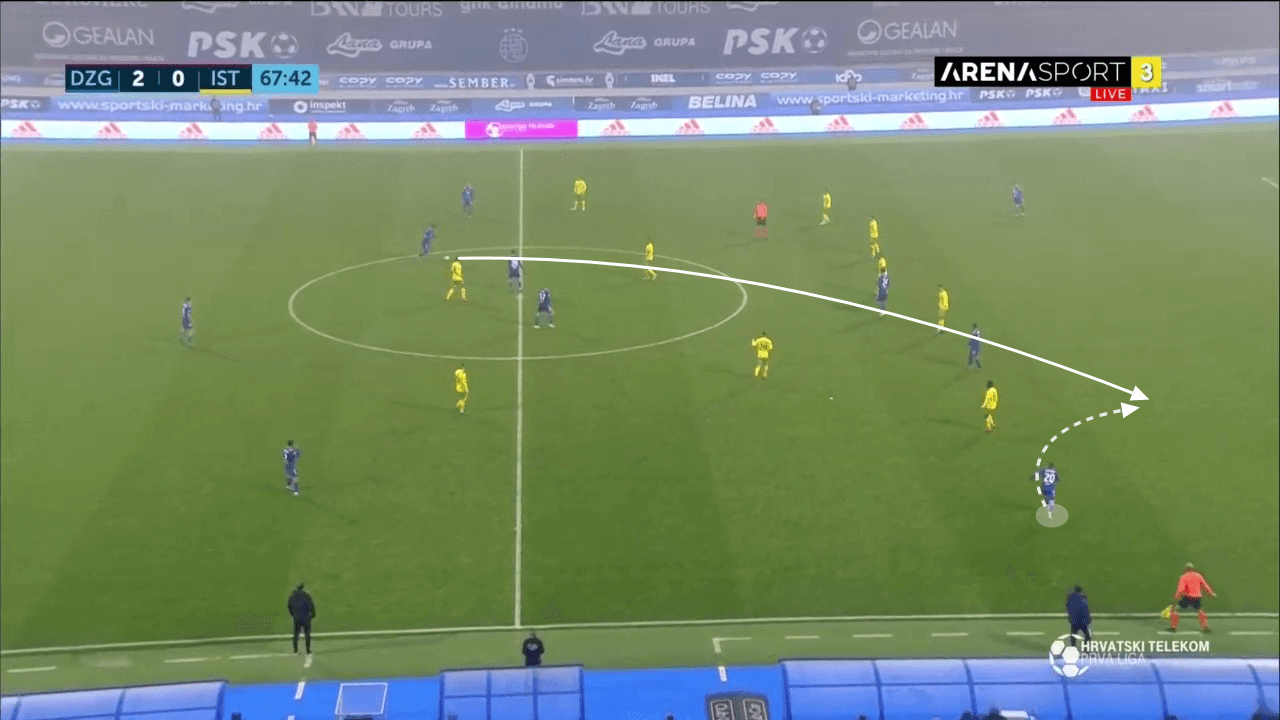 As we can see, the opposition defensive line stands high even though they don’t apply pressure on Gvardiol who has the ball. It is a big mistake by the opponent because Gvardiol has the ability to play the ball over the defence and into the space behind. Lirim Kastrati makes a diagonal run into the open space and Gvardiol successfully finds him behind. Even though an opponent in this situation doesn’t apply pressure on him, given his composure on the ball, he could be the option to avoid high pressing by the opponent and start a dangerous attack with a direct ball over the high defensive line.

The last situation in this section is also connected with his defensive work, and it is about his aerial ability. With experience and better positioning, he will win more aerial duels but what matters now is how he performs them at this moment. 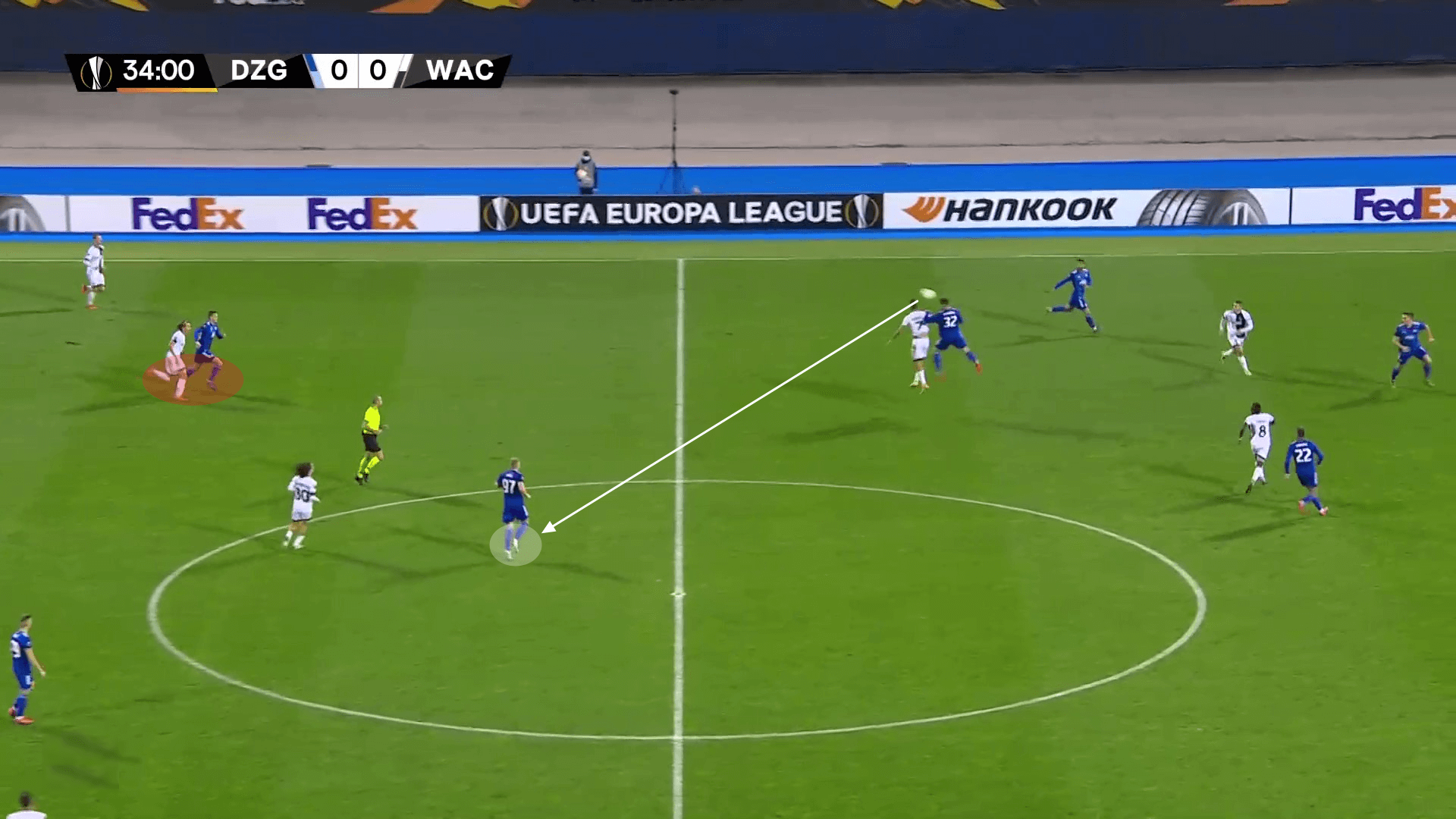 What Gvardiol does impressively is finding his teammates after his defensive aerial duels. For teams that tend to attack and control the game, this trait is important. Most of the defenders only look to win aerial duels without looking where to attempt a header, which could lead to dangerous attacks if the opponent collects the rebound. In this particular situation, Gvardiol makes a header towards Kristijan Jakić who is open as their deepest midfielder in most of the situations, and he often plays those headers towards him. That way his team can start a counter-attack catching the opponent on the wrong foot. If he played a pass towards a player marked in red, it would be dangerous because that player is under pressure immediately from his marker who is close to him.

Out of possession – defensive ability

After going through his passing qualities, we will now take a look at his defensive abilities. In the example below, we will see how he anticipates the opponent’s move. 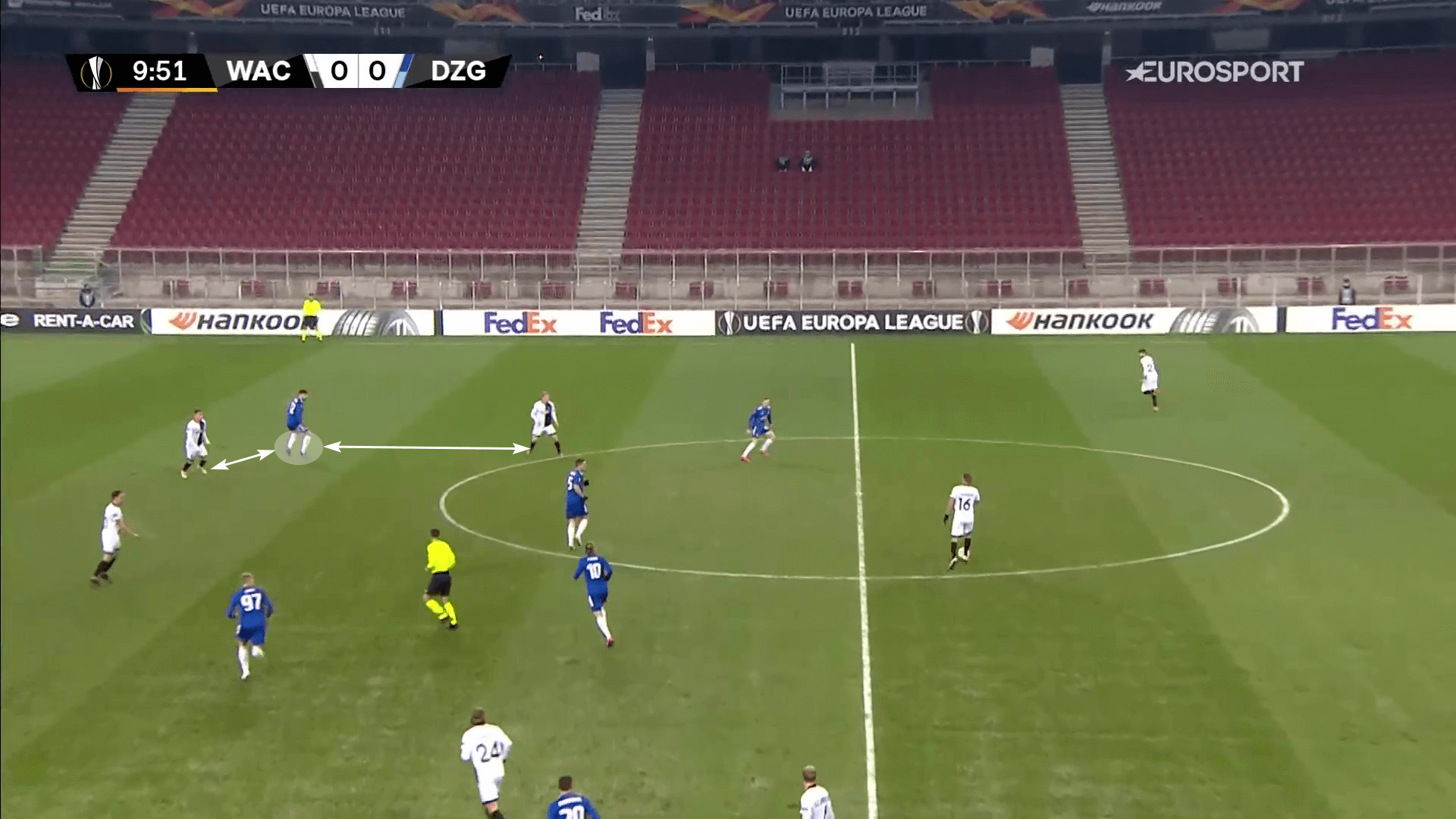 Wolfsberger number 16 is the ball-carrier and looks to play the pass forward. We can see that in the area close to Gvardiol there are two players who offer to receive the pass. What Gvardiol does smartly in this situation is that he doesn’t engage any player aggressively, positioning himself closer towards the opponent who is closer to the goal and waits for the move by the ball-carrier. 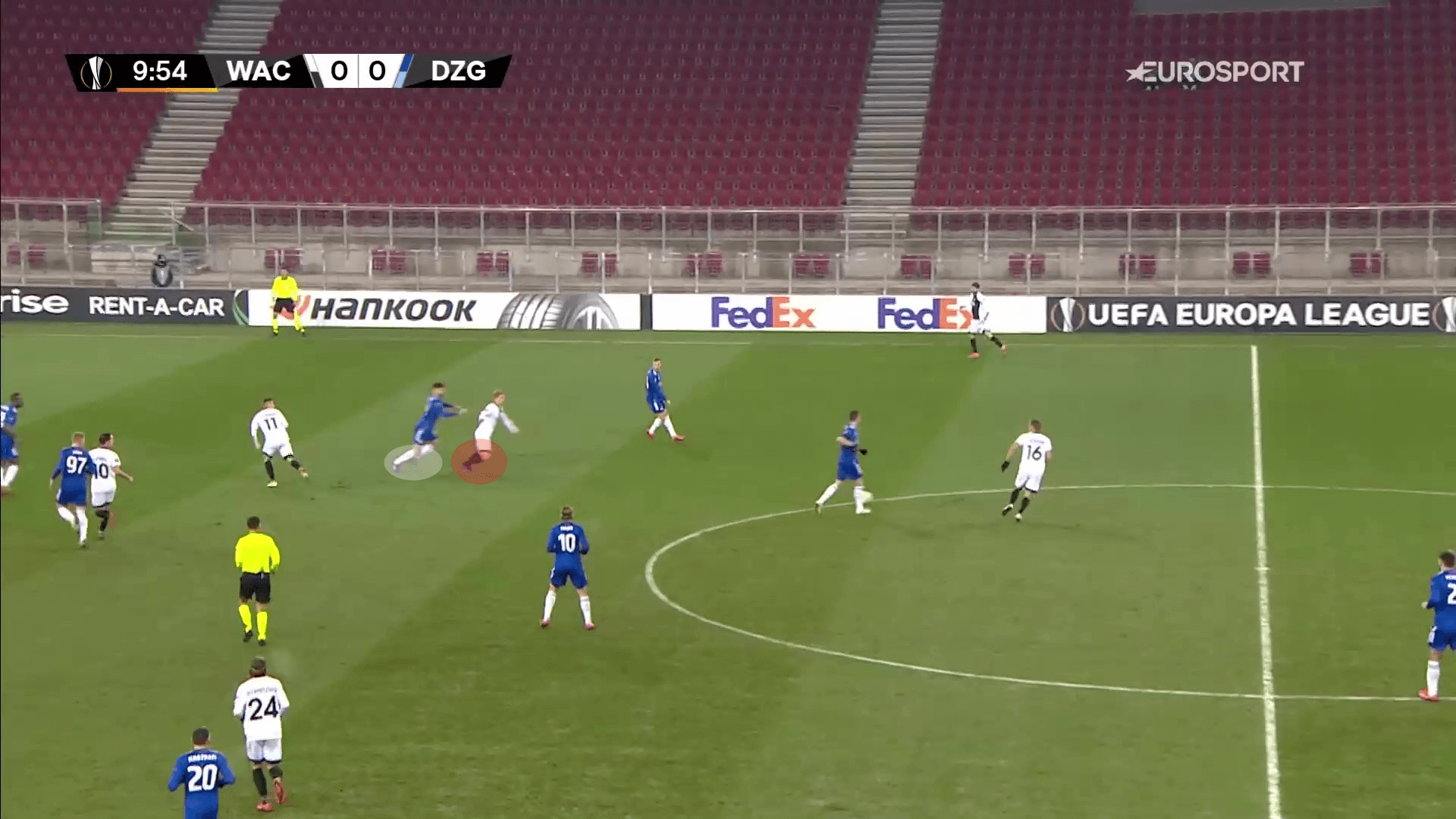 At the moment of the pass, Gvardiol accelerates, quickly putting pressure on the receiver and successfully tips the ball with his foot to dispossess him. Aggression and quality reading of the game help him react at the right time.

In the example below is the situation where Gvardiol does a great job to prevent a goal-scoring chance from a counter-attack. 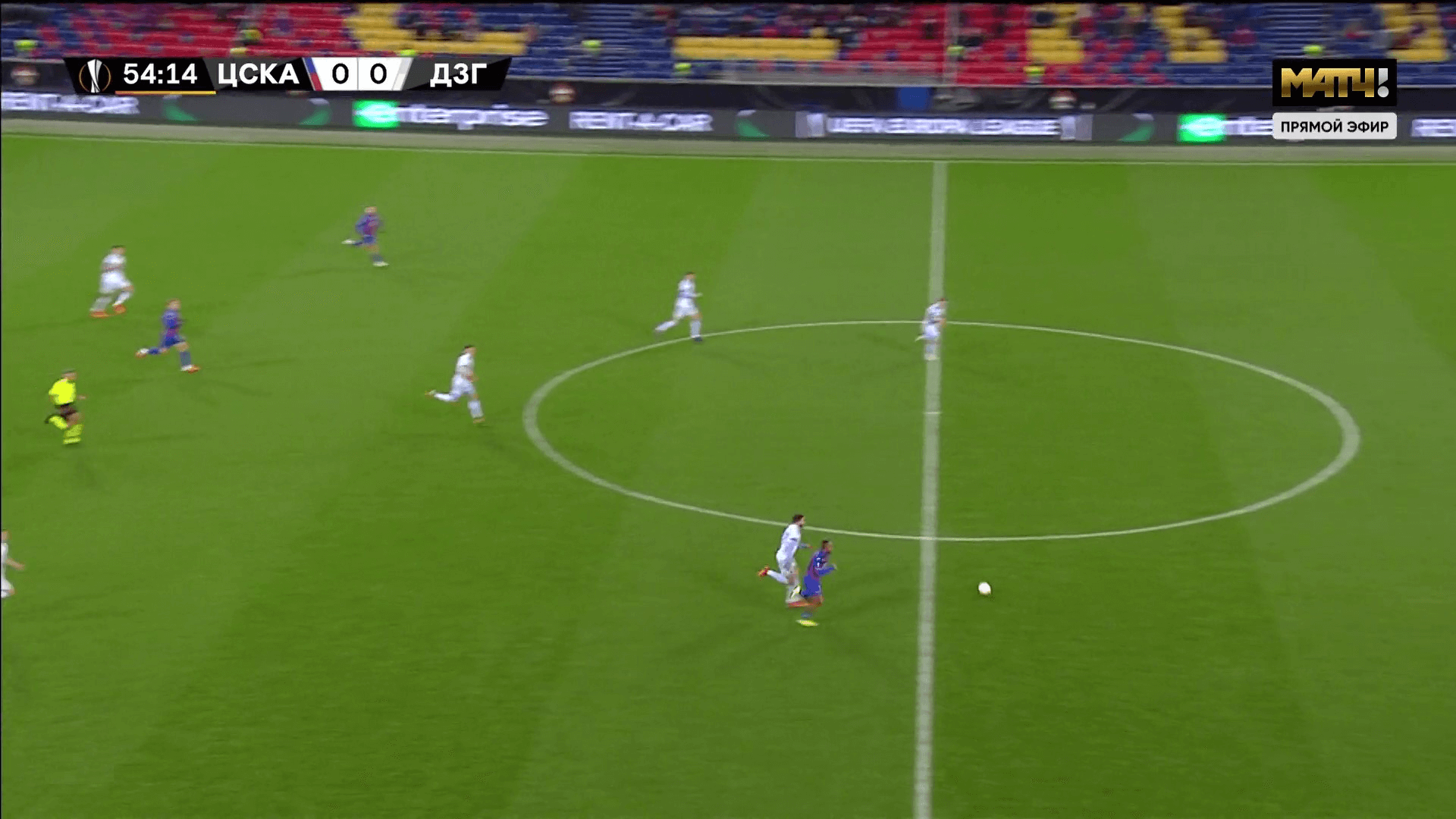 In the image, it is clear that Dinamo don’t have any players in their half and the opposition is counter-attacking as the CSKA Moscow player plays the ball behind their defence. We can see that Chidera Ejuke has an advantage over Gvardiol, especially because he had already reached his maximum pace at that moment. 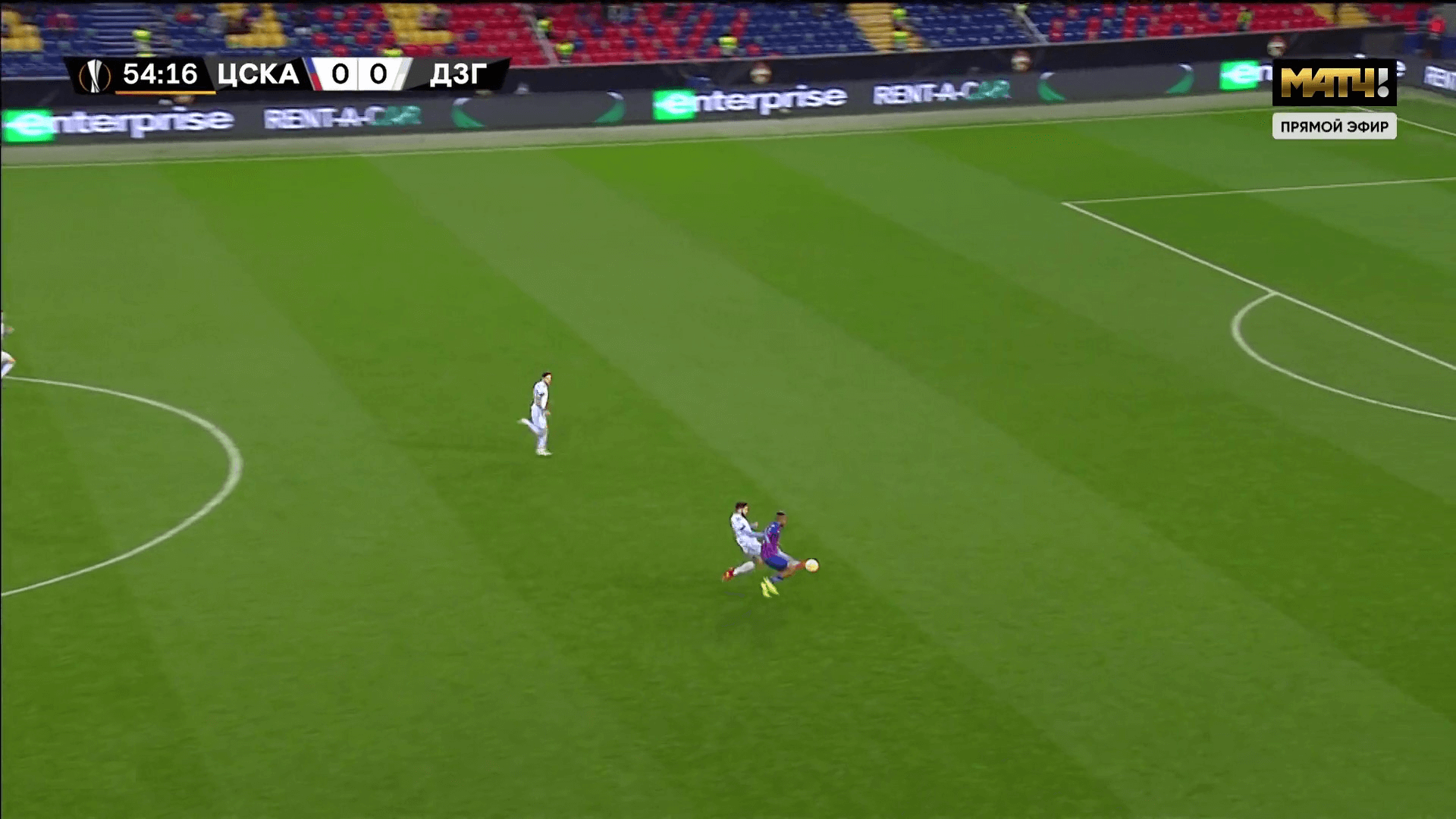 Ejuke is a very fast winger, but we can see that Gvardiol manages to catch him and makes a perfect tackle to dispossess him. Gvardiol can cope with fast forwards which will help him adapt to the Bundesliga and Champions League football in the future.

The last situation we will evaluate in this section is how Gvardiol looks in 2v1 scenarios. 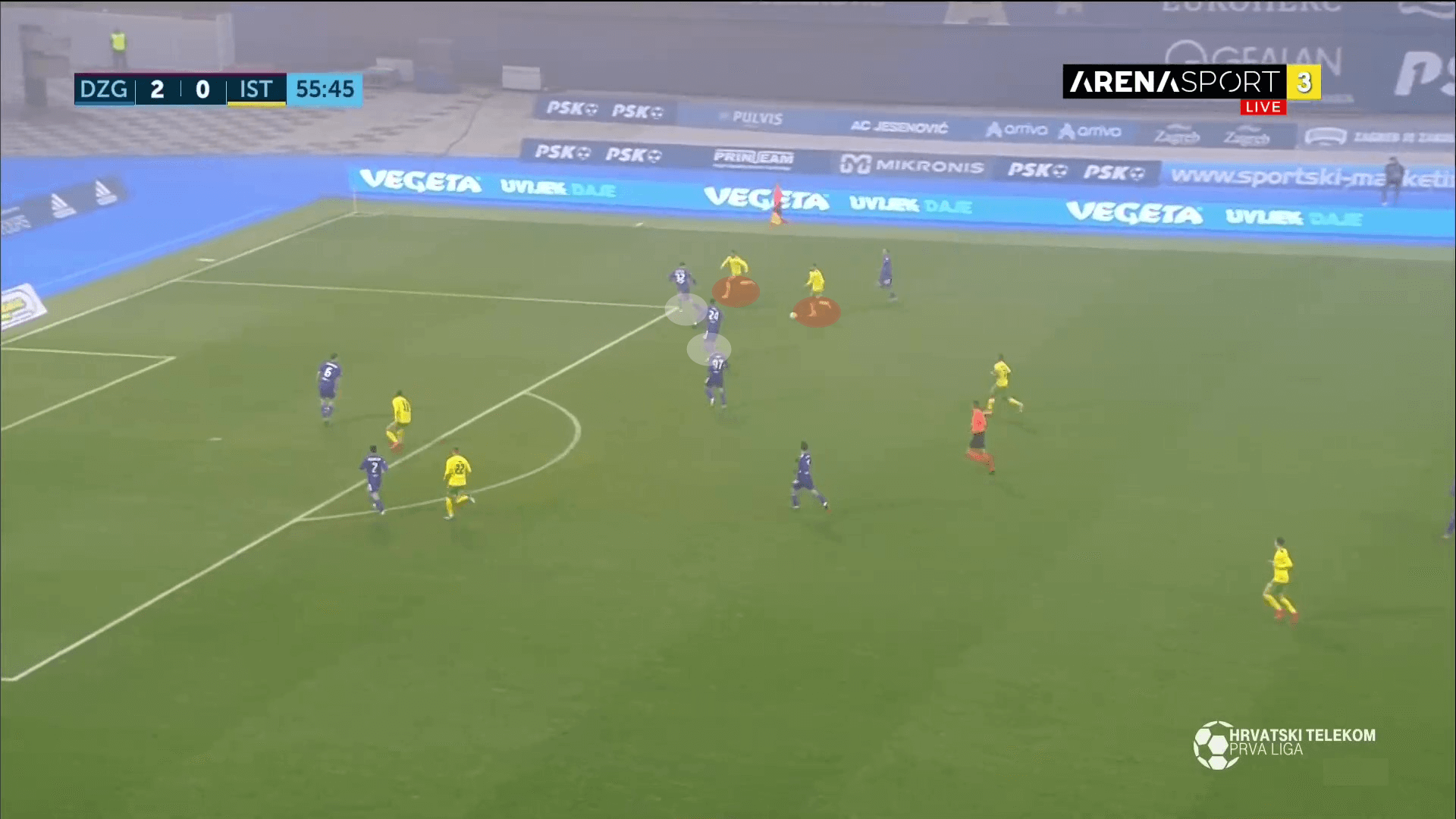 Final remarks and prediction for the future

Gvardiol possesses everything he needs to become a star, but only if he keeps his focus and determination. His defensive qualities can improve, but most of the improvement will come through experience. On the other end, his contribution in the build-up and composure on the ball are a rare sight amongst the young defenders. Gvardiol’s physical attributes are already on a high level, showing both quickness and strength which makes him suitable for any league.

Going through this analysis which consists of data analysis and tactical analysis we can definitely conclude that Gvardiol has a bright future. There is already talk that RB Leipzig could bring him back from loan in January which would be massive for him as they want to add depth since they had qualified for the Champions League knockout phase while also competing for the top places in the Bundesliga. It wouldn’t be surprising if he gets a call for the Croatian national team for the European Championship, but he will also participate in the U21 European Championship for their U21 team.

A lot of people doubted Gvardiol but there will be plenty of chances for him in 2021 to prove them all wrong. However, for us, there is no doubt he is a top talent and that he is destined for top-level football.