Jahkeele Marshall-Rutty, the 17-year-old Canadian, is on his way to becoming one of the best in the world. He was named in The Guardian’s list of the world’s best young talents, which is a list of 60 players who they deem to be the top upcoming talents of the next generation. In this scout report, in the form of tactical analysis, we will be looking at this young teenage sensation and investigating what are his best qualities and tactics that make him a standout teen.

Marshall-Rutty came through the ranks of Toronto FC and at 15, became the youngest player to sign a first-team contract for Toronto FC. The 17-year-old, who stands at 175cm, is a right-footed attacker with a strong mentality and is still evolving to become one of the best. 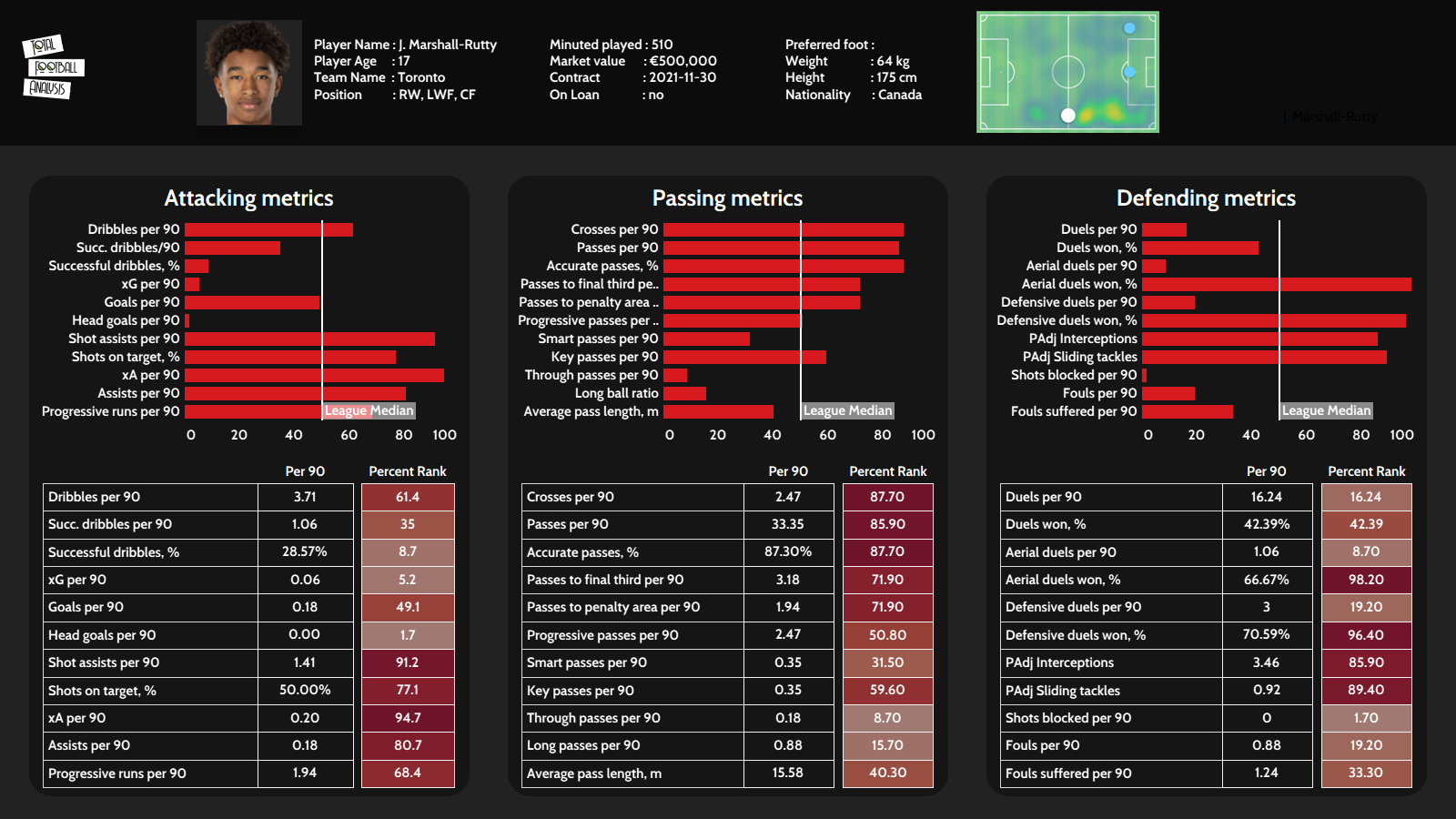 He’s a versatile player who can comfortably play on either flank or as a striker. The player consistently plays for Toronto in the MLS and Toronto II in the lower division. From his player profile, using his numbers from Toronto II, we can see that Marshall Rutty has been impressive in terms of his passes, with very good percentiles in shot assists, xA per 90, passes and their accuracy.

His numbers are also good in the defensive phase of the game, with very good PAdj interceptions and tackles. Although he’s got low involvement in both defensive and aerial duels, we should see that his success percentage is very good in both.

His ability to create space is one good example to showcase the maturity in his game. Despite being 17 years old, Marshall-Rutty displays some very good examples of creating space for himself in the attacking third. 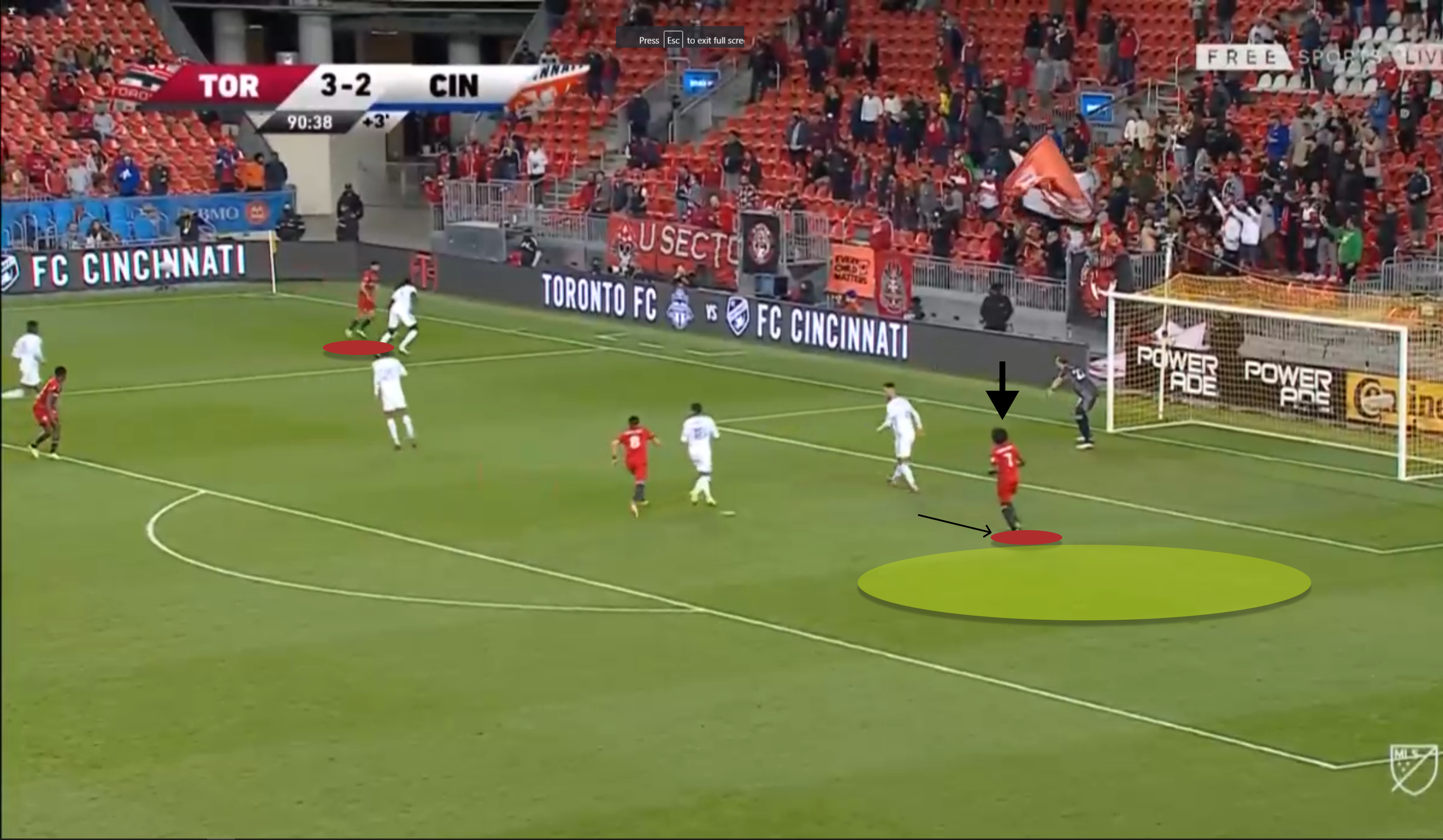 At the time of the cross, just like in the image, Marshall-Rutty initially stays with the defender, giving them a sense of control over the situation. Just when the defender feels comfortable and shifts focus to the ball, Marshall-Rutty is intelligent enough to slowly withdraw from his initial position and occupy the space behind to gain an advantage at the time of receiving passes.

In similar situations on the flanks, he utilises his pace to create space for himself to penetrate further. Even then, Marshall-Rutty is smart enough to deceive his opponents and gain an upper hand in such situations. 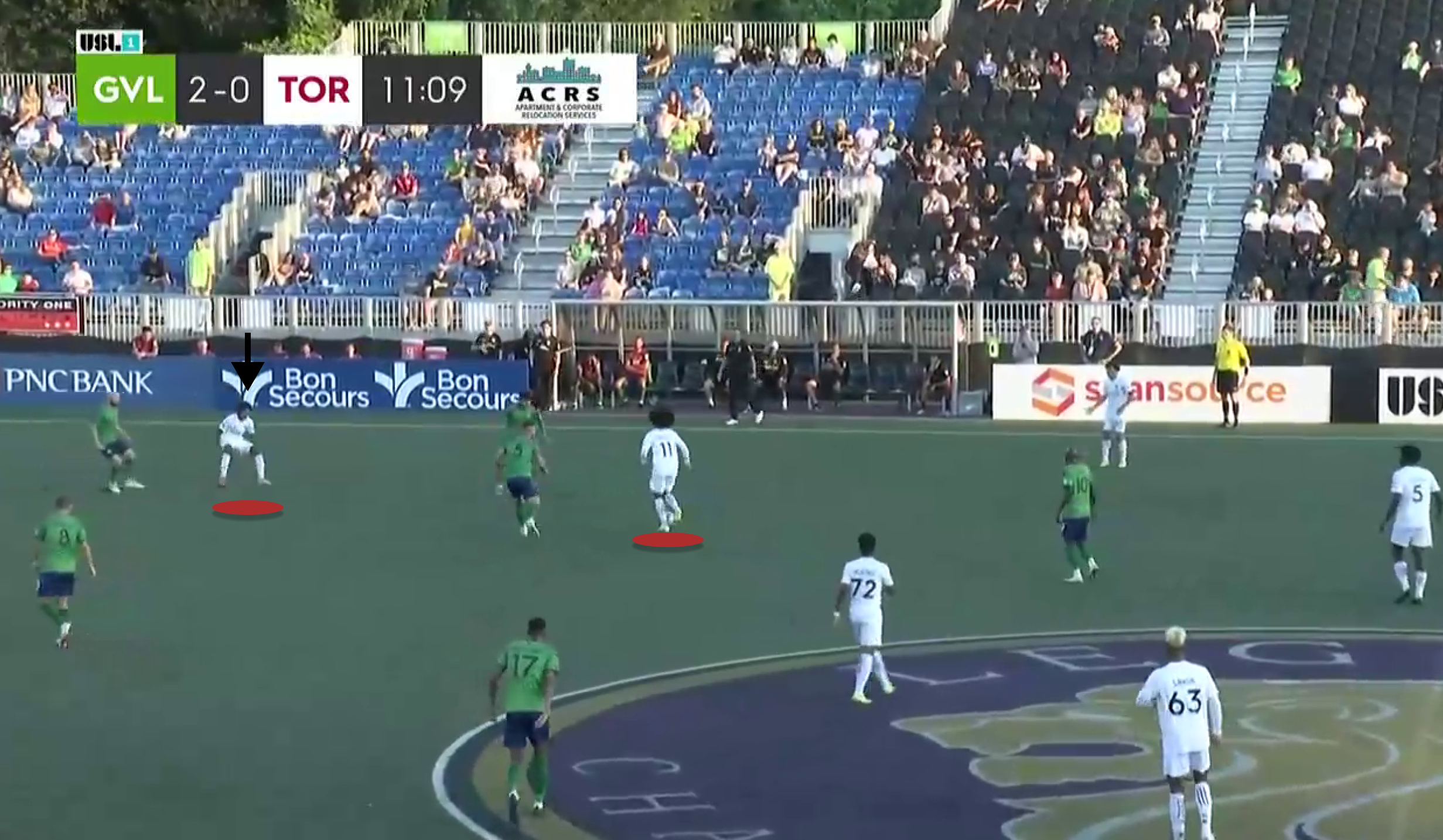 Influence and impact in the attacking third 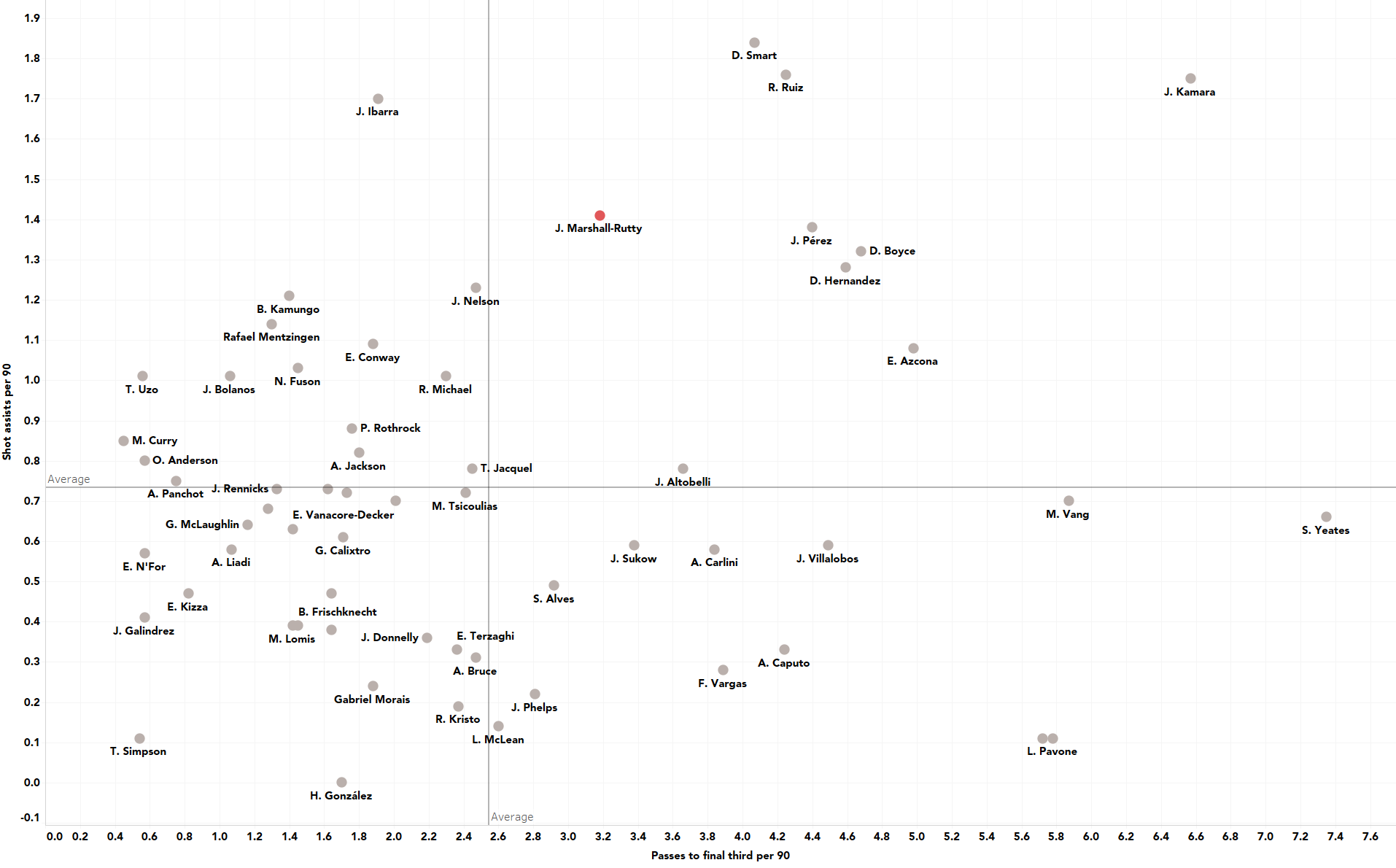 Marshall-Rutty is the kind of player whose numbers are less in terms of goals and assists but plays a huge role in influencing the attacking play through off-the-ball movements and passes. From the scatter, we can see that Marshall-Rutty (plotted with a red dot) is comfortably above average in both the metrics taken into account. He stands at 1.41 shot assists per 90 while also attempting 3.18 passes into the final third per 90 in terms of progression.

Since the 17-year-old has very good vision, he’s able to assist his teammates very well and influence the game by making sensible passes and runs. 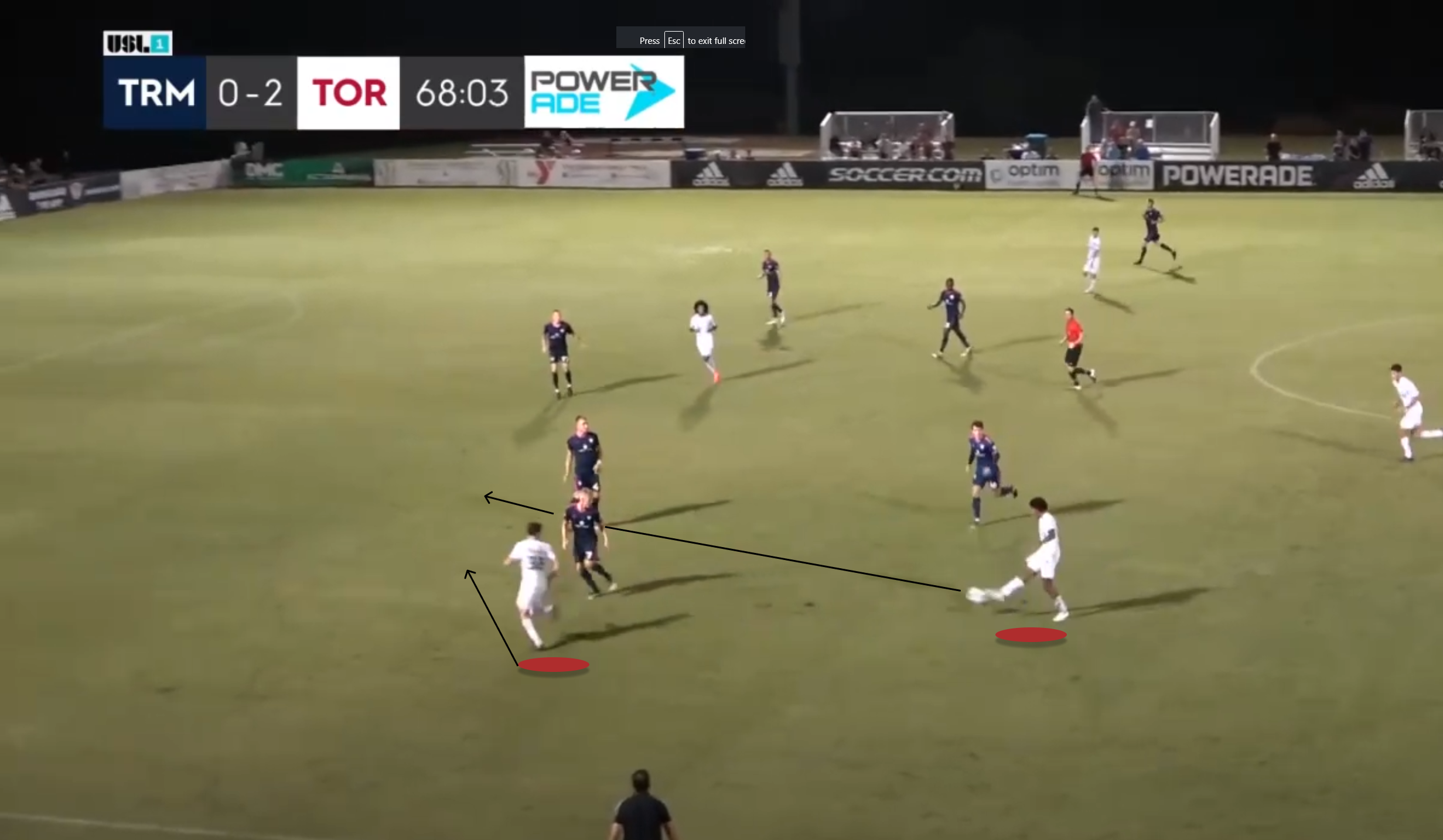 Since he’s very good at identifying spaces, he’s not only able to create space for himself but also for his teammates, who he routinely sets up in goal scoring positions. One good example is his performance in shot assists and he also holds an average value of 0.20 in expected assists, which is pretty high in the league. In the image, we can see Marshall-Rutty making a line-breaking pass. He also acknowledges the run from his teammate by timing the pass right.

The same happens with his off-the-ball movements in compact spaces. As we saw in the earlier section, he is able to create space for himself to stay ahead of the defender. 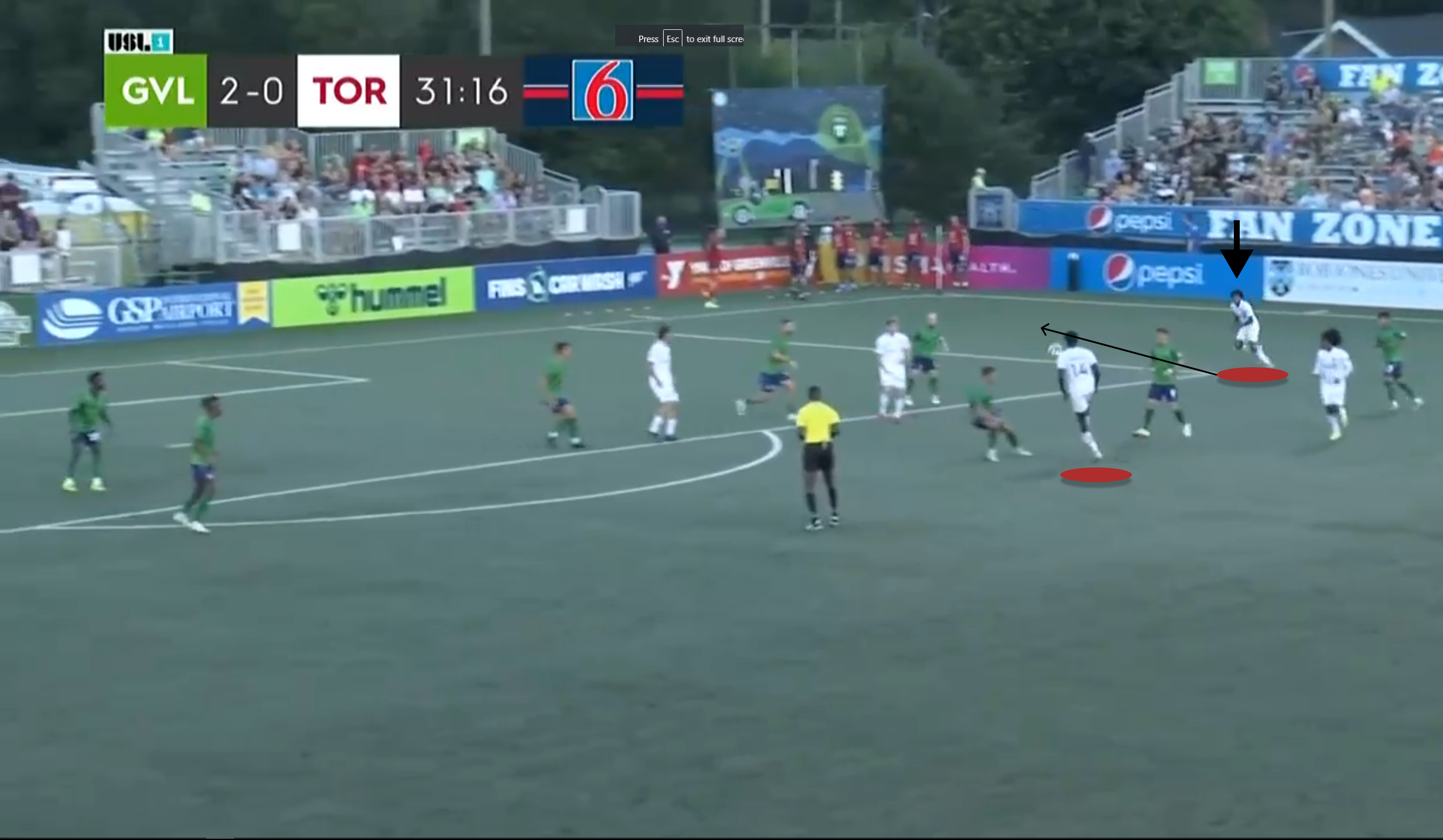 From this match situation, we can see how he isolates himself and cuts in suddenly to receive the ball near the flank. Since he has a good technical ability, he’s even able to take on defenders before making the final pass.

What he does after getting into the right place is what makes him stand out. He looks to create opportunities. Since he gives himself enough space and time, his crosses can be very accurate and threatening. 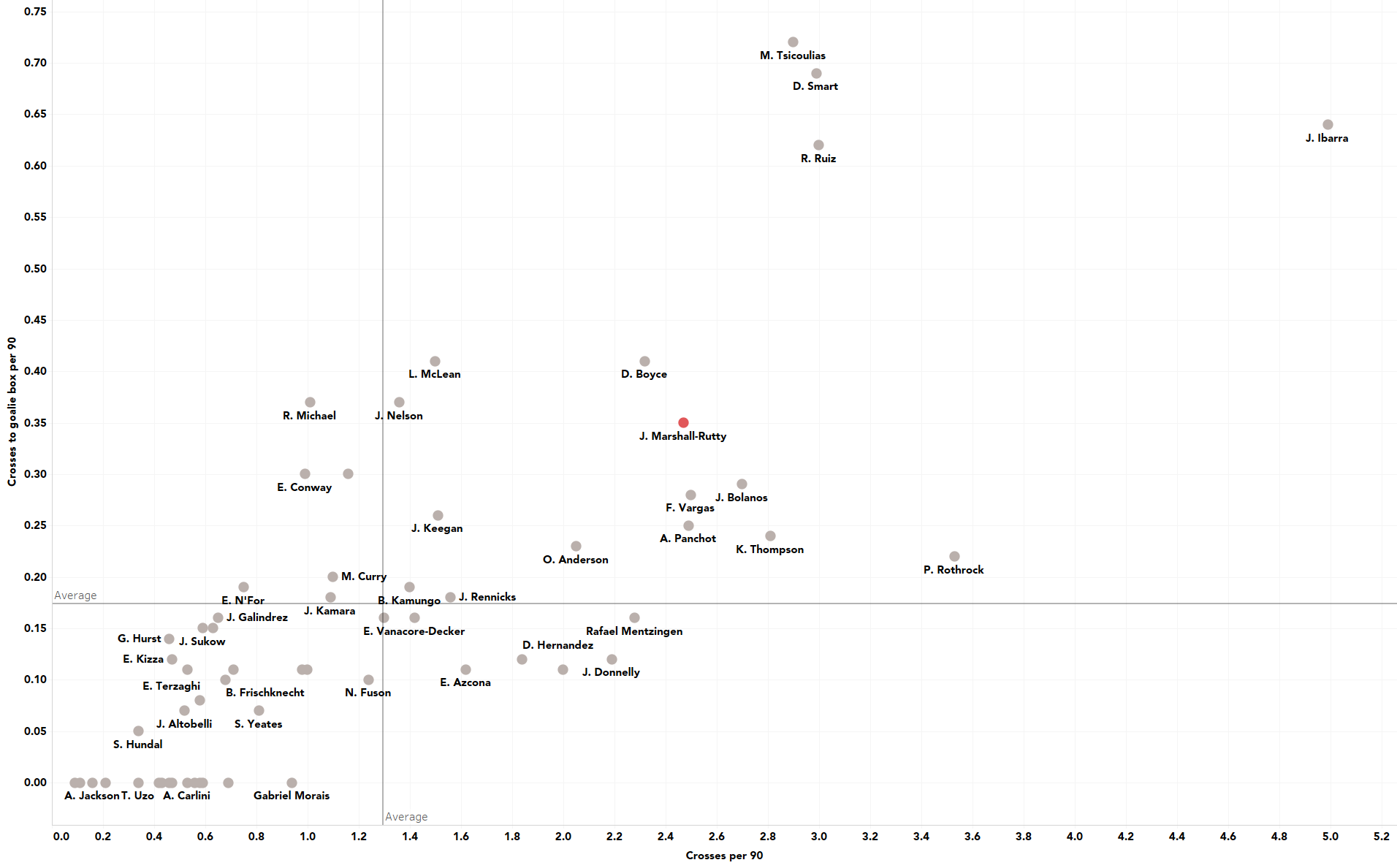 The scatter plot is to depict how dangerous Marshall-Rutty’s crosses are. Without any doubt, we can easily spot him in the top right box of elite performers in both metrics. He averages 2.47 crosses per 90 with an accuracy of 36% and 0.35 of his crosses ending in the opponent’s penalty area.

Apart from this, he offers support by acting as an option in the attacking third.

Acting as a support 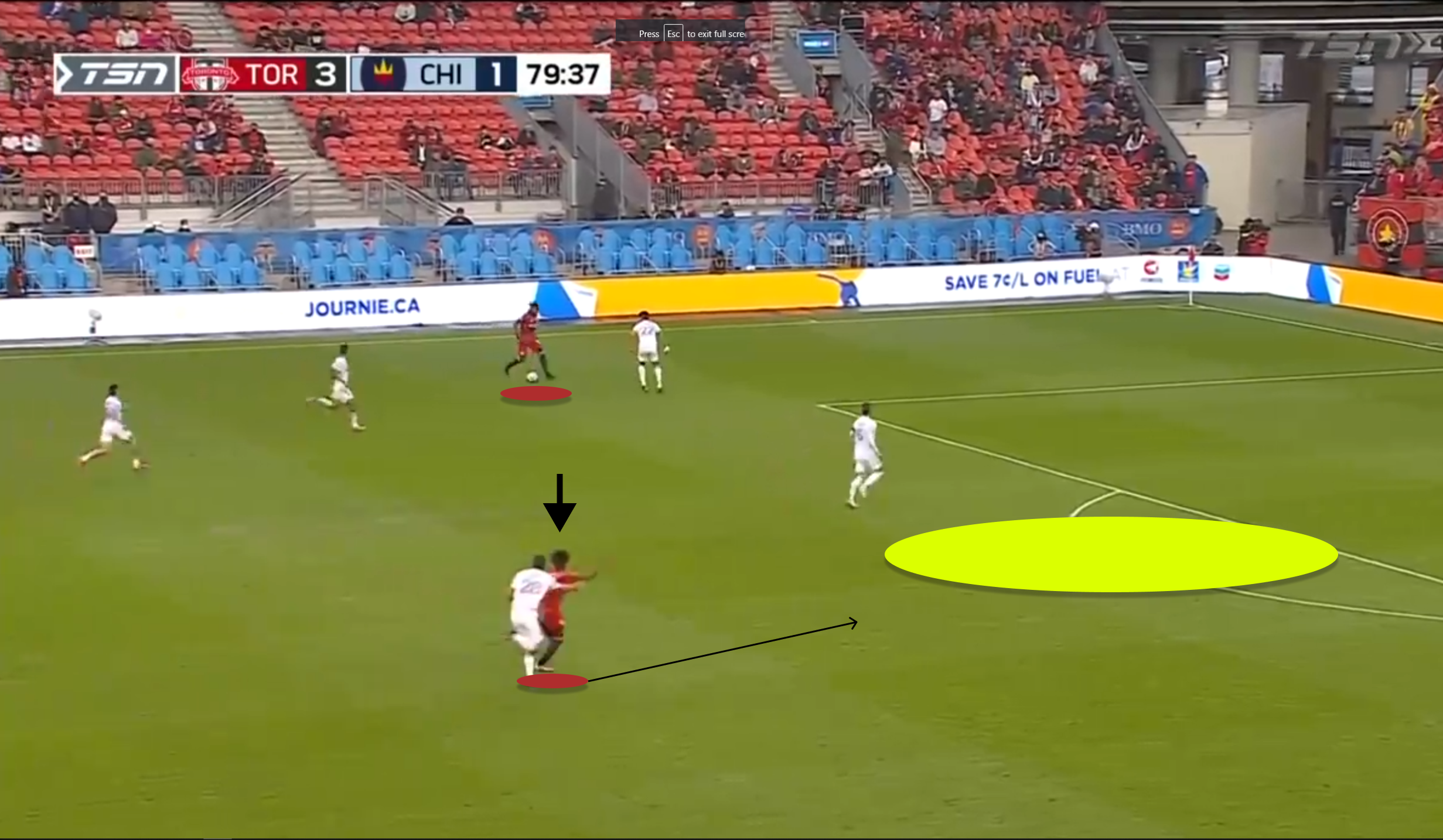 Since he has a very good pace, he acts as a key player in the transition to attack. By being able to attack the defenders quickly and by giving them no time to react, he’s able to quickly cover the distance in a short time and act as an option in the final third. At times, he’s also used as a decoy to distract opponents. In the picture, we can see that he’s sprinting into the free space right in front of the penalty area, whereas the defender is finding it hard to catch him due to the difference in pace.

In the defensive phase too, Marshall-Rutty plays an active role and is a reliable defender. Although his involvement in defensive duels and aerial duels stands at 3 and 1.06 per 90, he has a very good success percentage in these duels of 70.59% and 66.67% respectively. 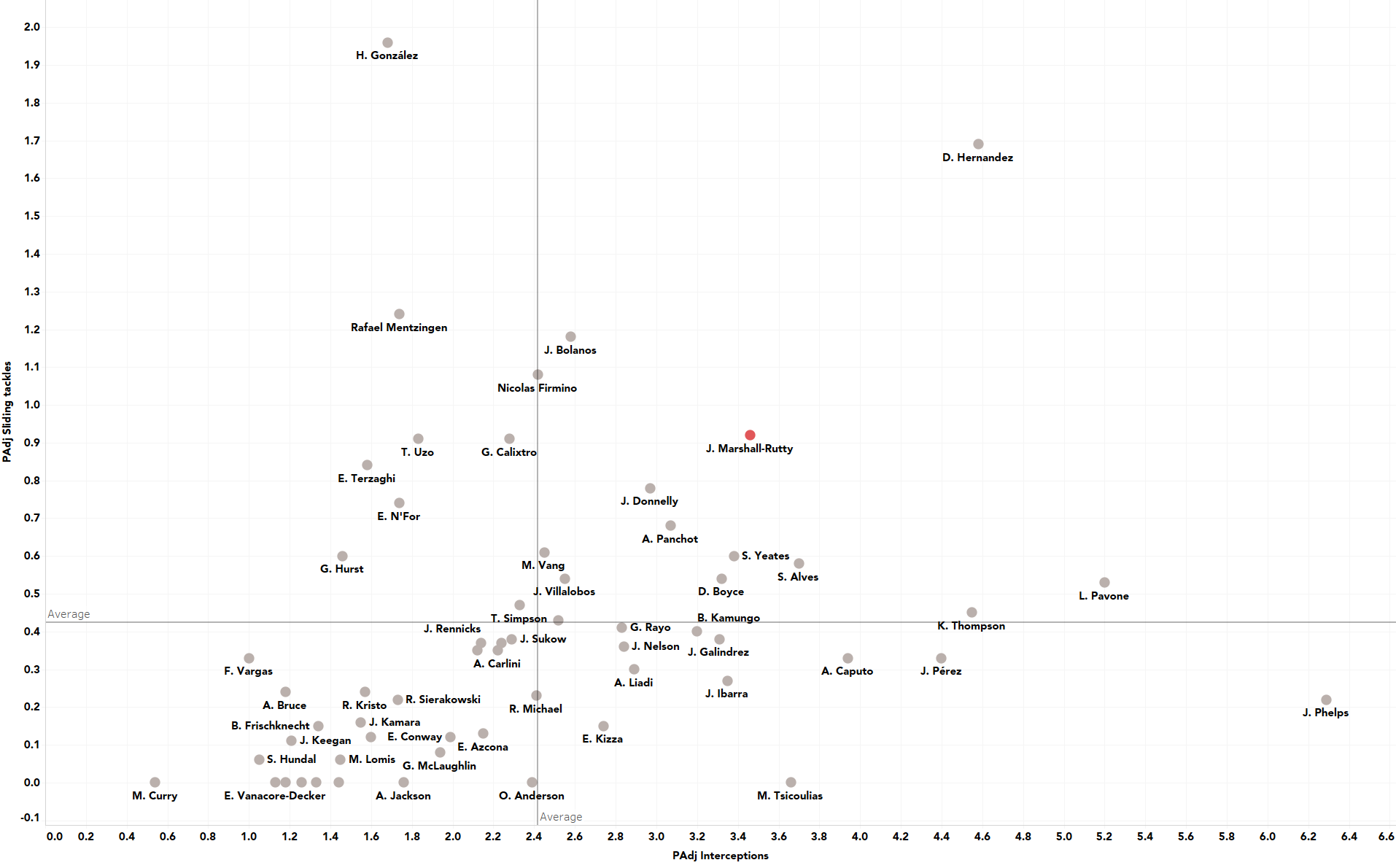 To further support the case that he’s a reliable defender when without possession, we can see his numbers in PAdj interceptions and PAdj sliding tackles. Both are above average with 3.46 and 0.92 per 90, respectively. The fact that he’s present in the top tight grid indicates that he’s among the best performers in terms of these defensive metrics taken into account.

In this analysis, we saw Marshall-Rutty still has a long way to go and grow but he possesses a strong technical ability and a strong mentality. UCL winners Bayern Munich and European giant Manchester City are already eyeing this young sensation and there’s no doubt there’ll be a race to get his signature in the near future.

He could be another player from Canada to mark his foot on European soil. The player still needs to improve his final passes and goal-scoring ability. Once done, Marshall-Rutty can turn out to become one of the best wingers in the world. His versatility in playing gives him an edge over other wingers. With a lot of time ahead, there’s no doubt he can nourish himself to become one of the best in the world.