Jadon Sancho left Manchester City in the summer of 2017 after being emitted from Pep Guardiola’s preseason squad due to a contract dispute. He then joined German powerhouses Borussia Dortmund on deadline day. Since then, he became one of the most dangerous attackers on the planet, as seen by the stats. Sancho finished the 2018/2019 campaign as the top assister in the Bundesliga, meaning he had created one more assist than Lionel Messi in La Liga and just one fewer than Eden Hazard, who was the best creator in Europe’s top 5 leagues last season.

Since his contract in Dortmund expires in 2022, this year could be the last chance to get a lot of money for the Englishman. That is why Dortmund are reported to sell Sancho this summer for more than €100 million. But is Sancho worth this amount of money? Let us discover this in the following analysis.

In this tactical analysis, we’re going to be discussing why Jadon Sancho is perfect for Solskjær´s 4-2-3-1 tactics at Manchester United.

It is widely accepted in Dortmund that Sancho won’t be at the club forever. As you will see in this scout report, the perfect move for the former Manchester City man will be to return to Manchester as he is likely to join Solskjær´s Manchester United.

From a simple transfer policy point of view, Sancho fits both United´s desire for stellar names and Solskjær´s policy of bringing in young, hungry domestic talent. A player of Sancho´s talent won’t come cheap and he would likely be the most expensive sale from Borussia Dortmund.

Therefore, Sancho will probably be eclipsing Ousmane Dembélé´s €120 million move to Barcelona. Football, especially in the Premier League, is becoming more and more like American sports in that there is no value in top transfers. If you need a player, you simply have to pay those eye-watering fees.

Sancho is a classical winger – a player that holds the width in the final third before looking to dribble on the inside or the outside, hitting the byline, and then getting a cross into the box. Therefore, he uses his close control, agility, and acceleration.

Sancho plays traditionally on the right-hand side, looking to beat the full-back with combination play, a run behind, or even on the dribble before delivering the ball. 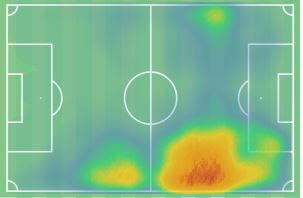 He can also play inverted on the left, cutting in before playing a pass or cross. In modern football, the top wingers have become the main goal threat for their sides with the likes of Arjen Robben, Cristiano Ronaldo, and Lionel Messi, or more recently, Mohamed Salah and Raheem Sterling. All of these players operate from those wide areas. They play inverted which means that those who are left-footed play on the right and the right-footed ones play on the left, so they can cut in and shoot.

But Jadon Sancho is different. Sancho is right-footed and whilst he has played on the left for Dortmund as well, his best football has been on the right wing.

But if he comes to Manchester United, how would he fit in? This season, Solskjær has primarily lined Manchester United up in a 4-2-3-1 formation. That system transitions to a 3-2-5 formation in attack with an emphasis on attacking with width and pace in the final third. 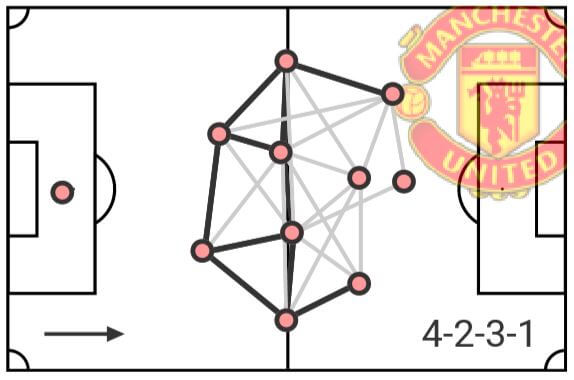 Sancho would simply slot straight in on the right wing. The England international is excellent in holding his width and sticks to his task. Even if it means isolating himself from the game at times, he understands that stretching the pitch creates more space for his teammates to operate in.

The image below provides you with an example. Guerreiro has the ball on his feet looking for a passing option. Because Sancho stays wide on the byline, Paderborn´s Pröger can cut the passing lane. On the other hand, there is lots of space for Hazard now. Hazard can receive the ball without pressure. Therefore, he turns and passes to Sancho with one contact. 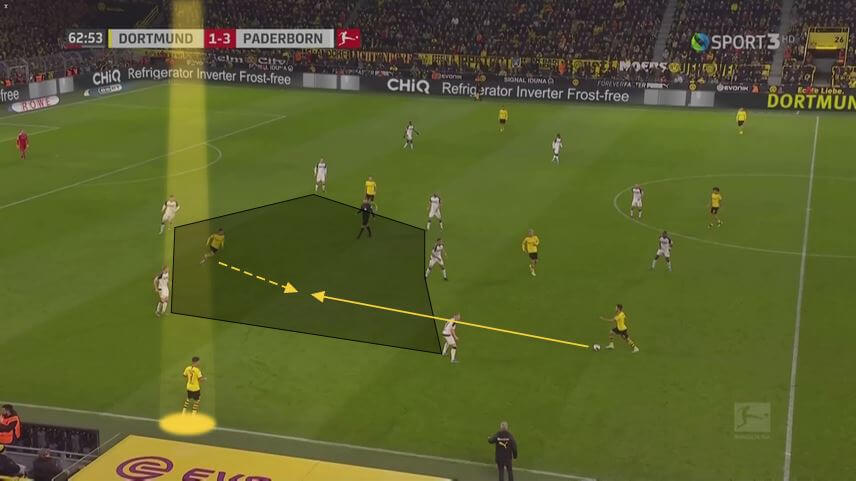 What is unusual about Sancho is that when he gets into the box, he tends to look for a pass rather than a shot. In the 2018/2019 campaign, Sancho could have been more selfish in front of the goal.

In the following image, you can see Sancho within the box against Leverkusen. He has lots of space to shoot and is free in front of the goal. Nevertheless, he sees Reus standing free and ready to shoot the ball in the back of the net. 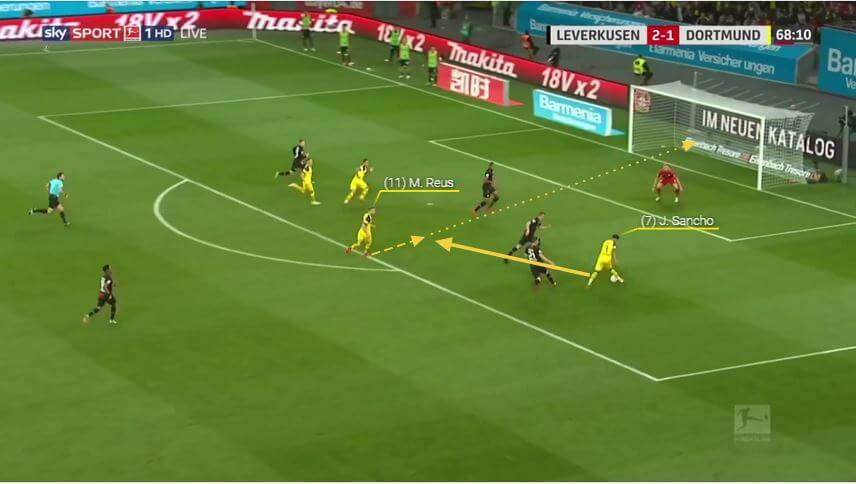 Nevertheless, that is not to say that he is goal-shy, after all, he still managed to score 12 Bundesliga goals. This is more than any Bayern player except Robert Lewandowski throughout the season. Sancho added that ruthlessness to his game.

Furthermore, holding the width also creates more 1 vs. 1 opportunities. That is something Sancho, again, excels in. Last season in the Bundesliga, Sancho averaged 5.5 dribbles per game (the same as Eden Hazard). He completed 61% of them which is a better stat than Lionel Messi’s 60%.

What this means to Manchester United is that when attacking from wide positions, opponents either have to leave their full-backs to do a 1 vs. 1, or they need to shift and cover. If they leave a 1 vs. 1, you can expect Sancho to get past his man 60% of the time.

And, if they shuffle over, his decision-making and his eye for a pass mean that he can exploit the space. That will help encourage Paul Pogba with those late surges from defensive midfield, or if Pogba is in number 10, to create from that area.

Manchester United are sorely lacking a creative wideman like Sancho. They have got wide talent in the first team with the likes of Martial, Rashford, and Greenwood. But they are all goal scorers – centre forwards playing out wide.

However, when transitioning to the 3-2-5 formation, the wingers hold the width in Solskjær’s system and Sancho is perfect for this role. 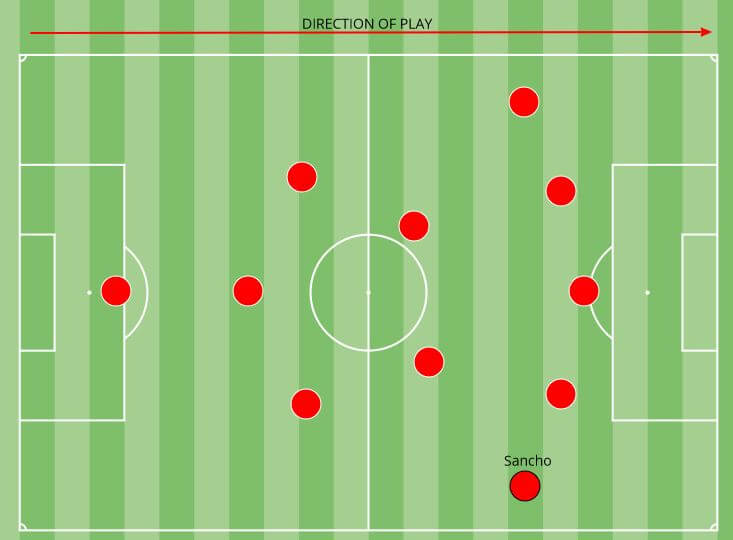 Solskjær´s attacking system also relies on the forwards making runs in behind. That is something, as previously mentioned, that Sancho excels in. There is also Harry Maguire´s long-range passing which is something we have not seen enough of from Manchester United yet. At Leicester City, Maguire loved the long pass out to Ben Chilwell.

If Sancho is able to run in behind, he could be found by Maguire with a long ball over the top. In an area where ball-playing centre-backs are the norm, we have seen long balls catching oppositions out with their centre-backs picking up the full-backs running in behind.

We have seen Sancho make those runs for Dortmund. An example is when Mats Hummels picked up Sancho running into the box, who then set up Marco Reus to get a shot away. That will provide another weapon the opposition will need to stop.

The interesting aspect of this is that it’s not a run from out to in, but rather it’s more of a run that continues with that width. Sancho makes straight runs from that right wing position.

The following images show Sancho dribbling straight on the right wing into the box after he received a long pass. Because he is already past two defenders, one centre-back is forced to step out. This movement creates a lot of space in the penalty area and Reus can score another goal. 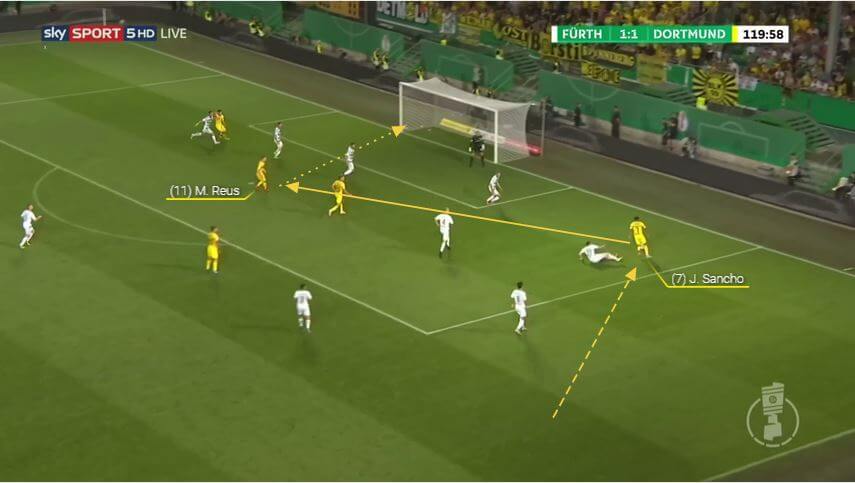 This procedure stretches opponents in another way. As mentioned before, centre-backs move out to that area to go and close that down. If the run is in behind a full-back, it is a real issue in the penalty area. United could then create an overload in that central position through Maguire to Sancho to Rashford.

Sancho is an incredibly intelligent forward as well. Adding to that, he has the ability to use his intelligence to cheat defensively and save his legs by covering the passing lanes. We have seen that in the last few seasons with Dortmund, Lucien Favre left Sancho higher up the pitch in an aggressive counter-attacking position and this, in fact, had led to Sancho´s assist for Paco Alcácer in the German Super Cup.

Bayern were in possession and being pressed heavily by Dortmund. Therefore, Sancho takes up an aggressive position covering the backwards pass and when the pass is played, Sancho is able to intercept the ball. 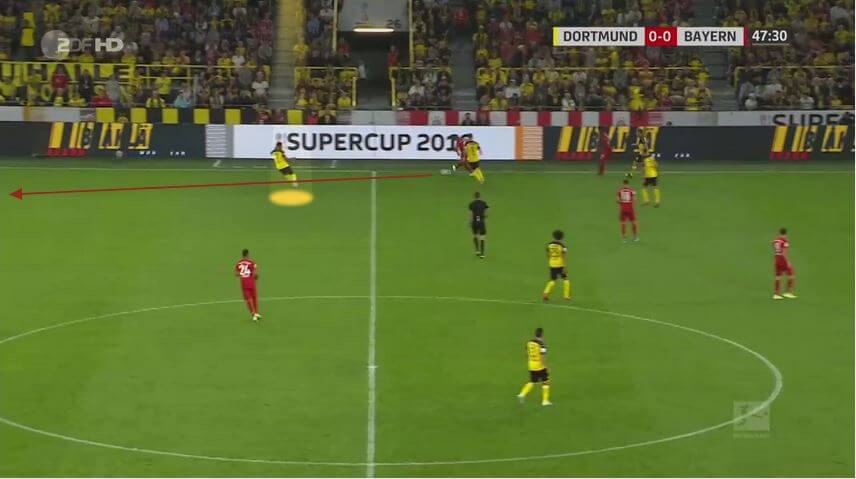 He drives at the defence, beating Boateng before nutmegging Thiago and beating Tolisso to set up Alcácer to finish. That showed his unbelievable technical ability once again. 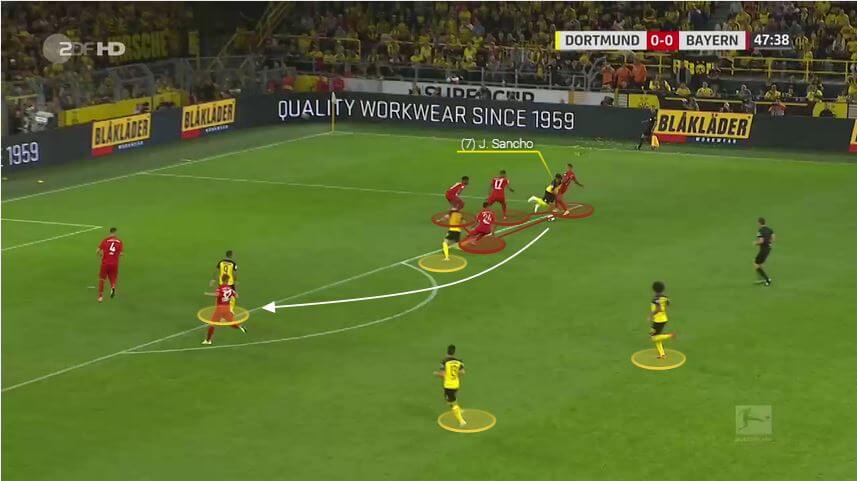 This aggressive positioning is something we saw under Solskjær last season – leaving the forwards in attacking positions ready to counter-attack. Sancho would fit right into this.

Finally, Sancho would help United´s other forwards in the decision-making. For Dortmund, Sancho consistently arrived late to the back-post, scoring 65% of his goals for Dortmund from that back-post area.

In a Bundesliga match between Dortmund and Leverkusen, Sancho used this method of movement brilliantly. Diallo played as Dortmund´s left beck and took a cross to the back-post. Sancho had lots of space and time to hit the ball and scored another goal. 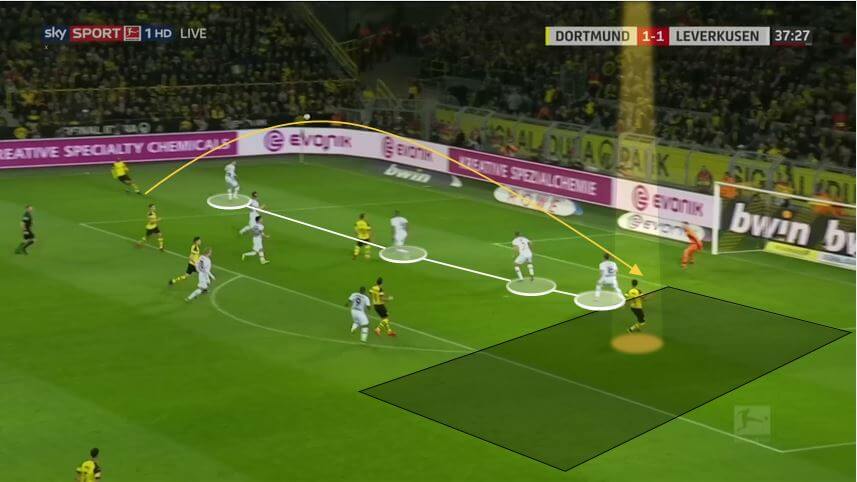 For Manchester United, his teammates will be fully aware of that in the final third, knowing that Sancho would arrive late at the back-post to finish.

Again, in United’s attacking shape the ball could start with Sancho before changing the point of the attack by switching out to the left. United’s left winger will then have a 1 vs. 1, could attack the opponent and fire the ball to the back-post, in the knowledge that Sancho will be there. It would be reminiscent of a typical Manchester City goal, the type that Raheem Sterling frequently scores.

Sancho´s spark in the final third could also take the burden off Paul Pogba in creating something out of absolutely nothing. In Dortmund´s 3-1 win over Cologne, the Black-and-yellows were 1-0 down. With a corner, Sancho received the ball short, took it onto his left foot, and buried it into the bottom corner (even though the whole Cologne team were defending). 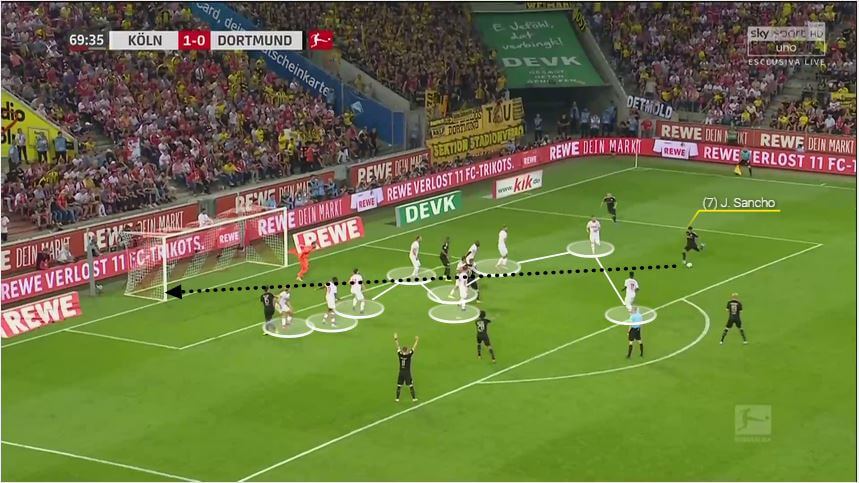 That is something Manchester United could need – adding another variation to those corner situations.

And on the point about creating something out of nothing, Sancho has incredible composure inside the penalty area. 48% of his assists for Borussia Dortmund have come from passes into the box. Sancho is incredibly good in his decision-making in the final third (especially in the penalty area).

If Jadon Sancho were to join Manchester United, he would take the team to a totally new level. United could finally have their new number seven for the next ten years – a number worn by the likes of George Best, Bryan Robson, Eric Cantona, David Beckham, and Cristiano Ronaldo.

The young winger has the potential to be a future Ballon d´Or winner and so he is definitely worth the market value of €120 million. In Solskjær´s future plans, Sancho could play a key role and Manchester United could start a new golden era again. The potential is already there. Just imagine: Rashford, Greenwood, Martial, Wan-Bissaka, Bruno Fernandes, Pogba – and soon Sancho. This would be a legendary squad playing in the Theatre of Dreams.