Werder Bremen and Borussia Dortmund have both had very different seasons, and therefore have very different goals going into the closing stages of the season.

Werder Bremen are of course looking to stay in the Bundesliga, finding themselves falling further and further away from the rest of the pack down the bottom end of the table. On the flip side, Borussia Dortmund are looking to keep up with RB Leipzig and Bayern Munich in the chase for the Meisterschale at the top of the table. So for very different reasons, this game was a must-win for both sides.

This tactical analysis gives an in-depth analysis of the tactics used by both sides in this Bundesliga clash. 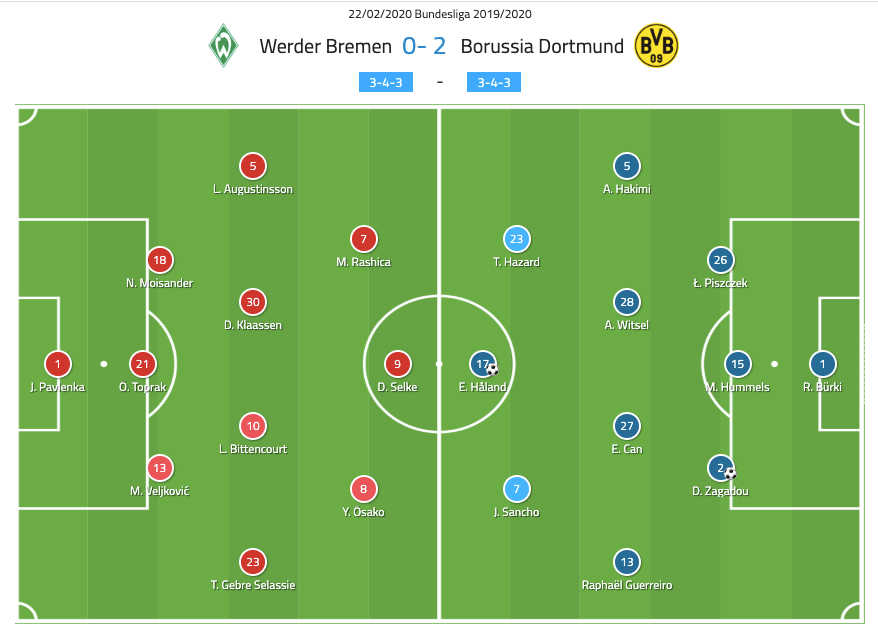 Both sides fielded 3-4-3 formations as expected. For Dortmund, there was no space in the starting lineup for Julian Brandt or Manuel Akanji with Emre Can and Dan-Axel Zagadou each starting in their positions respectively.

For Werder Bremen, following their 3-0 loss to RB Leipzig, Leonardo Bittencourt dropped into central-midfield, whilst Davie Selke led the line and Yuya Osako was pushed to the right side of the front three. Ömer Toprak came in for the injured Kevin Vogt, and Ludwig Augustinsson started with Marco Friedl dropped to the bench.

How Dortmund look to create space for Haaland

When you have a goal-scoring phenomenon leading your attack it makes good sense to provide him as much opportunity to use his strengths as possible. Seeing how devastating he has been in his time at Dortmund already when given space in behind to attack, teams are now sitting deeper against them and ensuring there is less space behind their defence for Haaland to run into. However, Haaland is big, strong, and can finish given any amount of space anywhere within 25 yards, as Paris Saint-Germain will no doubt testify from last week’s Champions League “Round of 16” fixture.

Something we have seen plenty of from Dortmund in their back three is where their two central-midfielders will drop deep as the back three look to play out. In doing so they can support in ball circulation, whilst also leaving plenty of space behind them. As Dortmund stretch the opposition press, their back three can play directly into the feet of their centre-forward, who can drop a little deeper himself and receive the ball to feet. Dortmund also do this when the ball is further up the field, particularly when the back three have it just inside the opposition half. Again the midfield will drop deep and ensure that Haaland has lots of space to receive the ball, but more importantly, has as few defenders around him as possible. 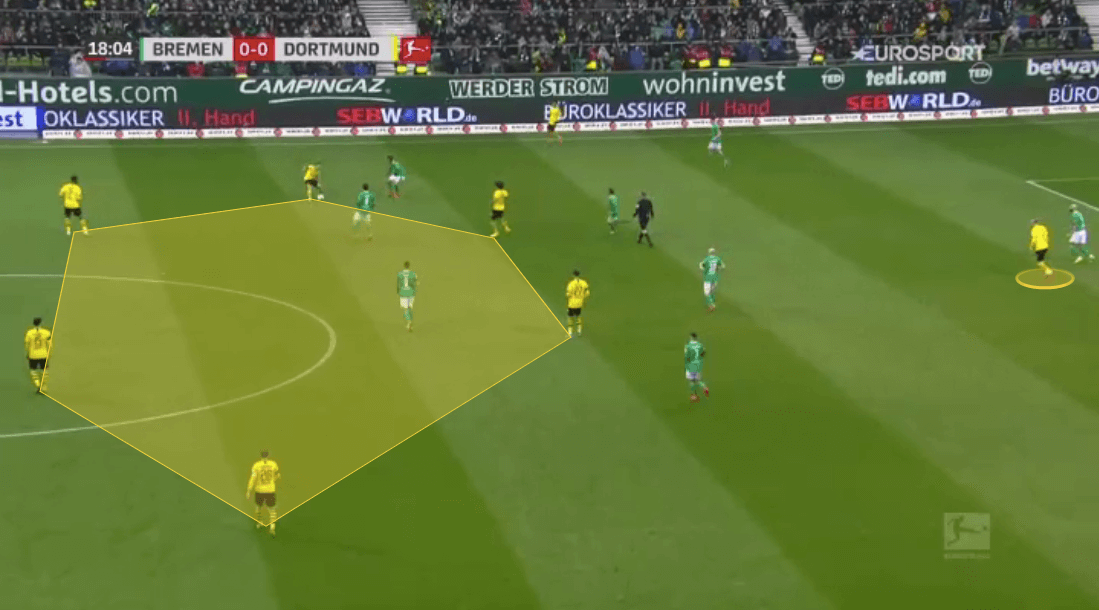 One of the advantages of the back three is it allows Lucien Favre to use his two wing-backs, Raphaël Guerreiro and Achraf Hakimi, who can be so devastating in attack. As they provide width in attack, it allows Sancho and Hazard, or Marco Reus when fit, to play in the half-spaces. However, in this game, we saw Raphaël Guerreiro, in particular, playing a little deeper than usual at times as the image below demonstrates. We can also see in the image how wide Hazard is in this phase of play. 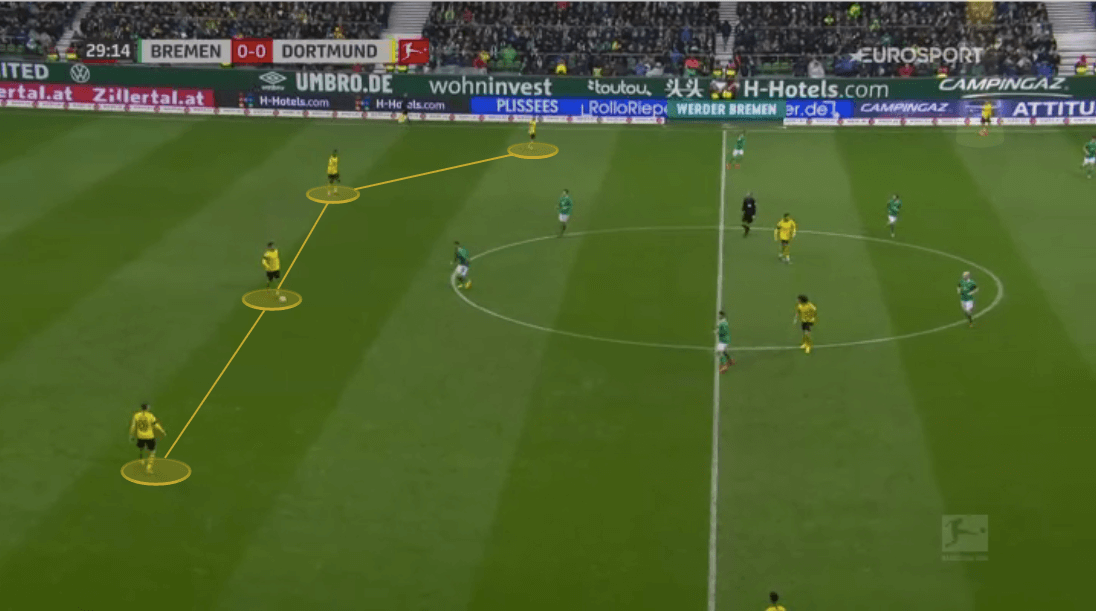 We can see how much higher Hakimi is playing than the left wing-back, and in periods we saw Dortmund take a back four formation whilst in possession. In doing this it meant that Bremen’s press came further forward, most notably down Raphaël Guerreiro’s left side. This provided space for either Hazard or Sancho, depending on who was operating on that side at the time, to stay wide and isolate themselves against the Bremen wing-back.

Throughout the game, we saw at least one of these wide forwards give far more width than perhaps we’d usually see, and that was to give Haaland lots of space to run into.

There’s an example below as, despite Hakimi being in a high and wide position, Sancho is operating in the same space. By receiving in this position, however, we can see how stretched this has made Bremen’s defence and how much space there is suddenly for Haaland to receive the ball in. 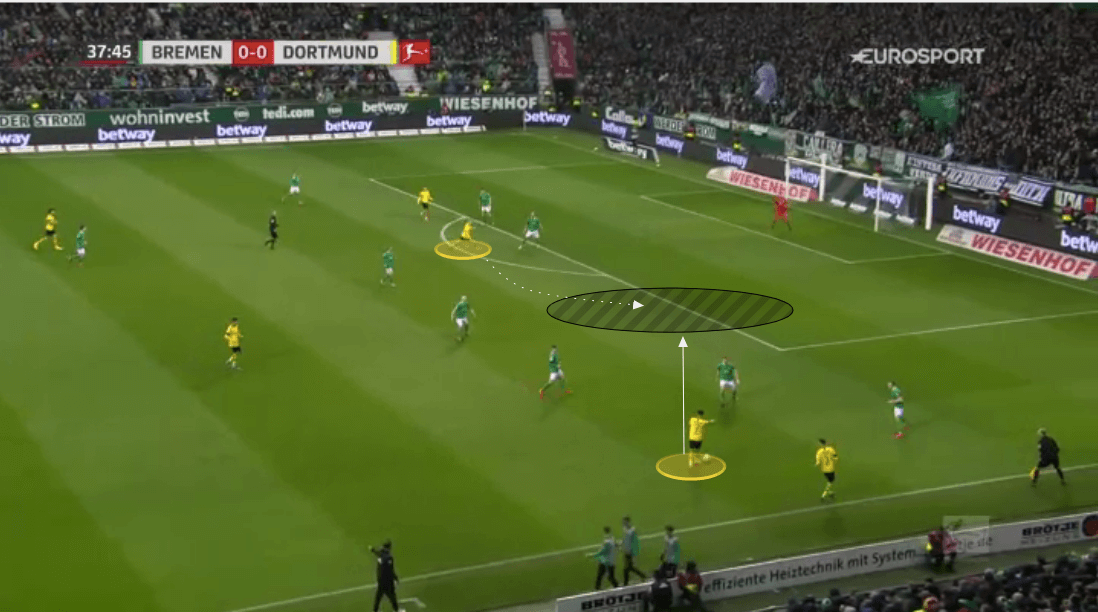 How this tactic led directly to a goal

It was Dortmund’s second goal which came from attacking the space created by Dortmund’s wide forwards playing so wide.

Favre clearly wanted space for Haaland to attack pull-back crosses, and this width in their attack provided lots of this. He came very close to scoring from such a pull-back cross in the 52nd minute, where he was able to latch onto such a cross which was played to the top of the 18-yard box. The image below shows how all three of Dortmund’s attackers in the box are positioned towards the centre or back post and therefore there is lots of space for Haaland to move laterally towards the ball. 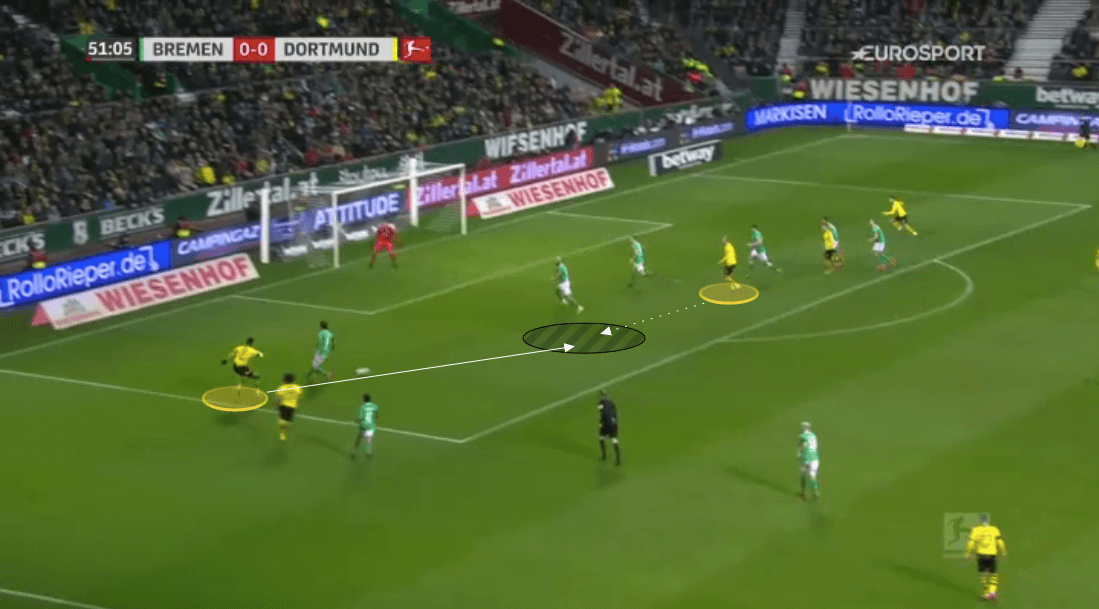 Fortunately for Bremen, he missed the target, however, and the second time this chance arose, he took it.

The image below highlights once again the space left between the wide forward, Sancho in this case, and Haaland. Hakimi is in possession and could easily have looked to play Sancho in that space, however, the positioning of the Bremen defender means there was a risk to this pass, and any such pass would likely see Sancho enter into a foot race with the defender. 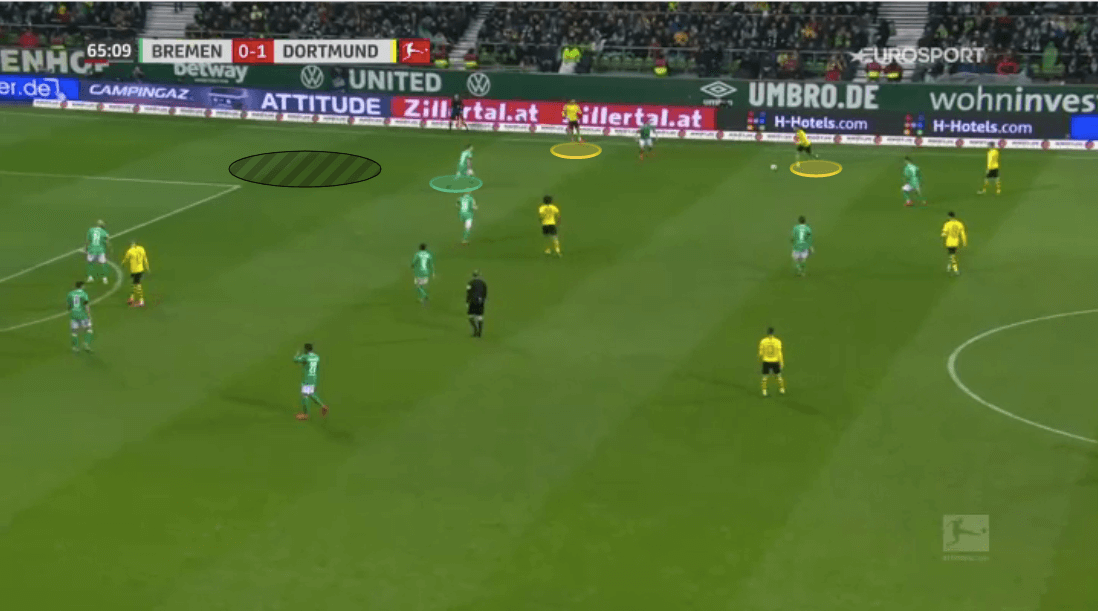 Hakimi showed patience and understood Sancho’s wide positioning meant he could make a run into this space himself, whilst playing a pass to move the Bremen defender out of the space. We see this below as Sancho now has possession. Hakimi is able to attack the space in behind the Bremen defenders following Sancho’s pass. 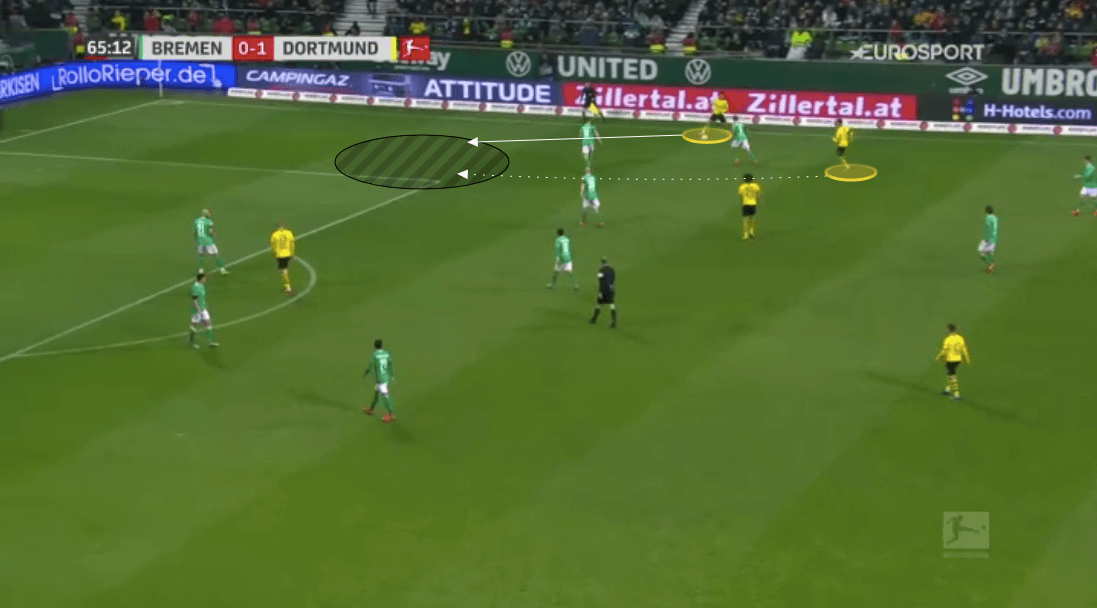 It is at this point that we see a similar scenario from 14 minutes earlier. Haaland initially darts towards the goal to create enough space for him to receive the pull-back cross. As he makes his run toward the ball, Hakimi pulls it back and Haaland is able to finish, stealing enough space from the defence to receive the pass. 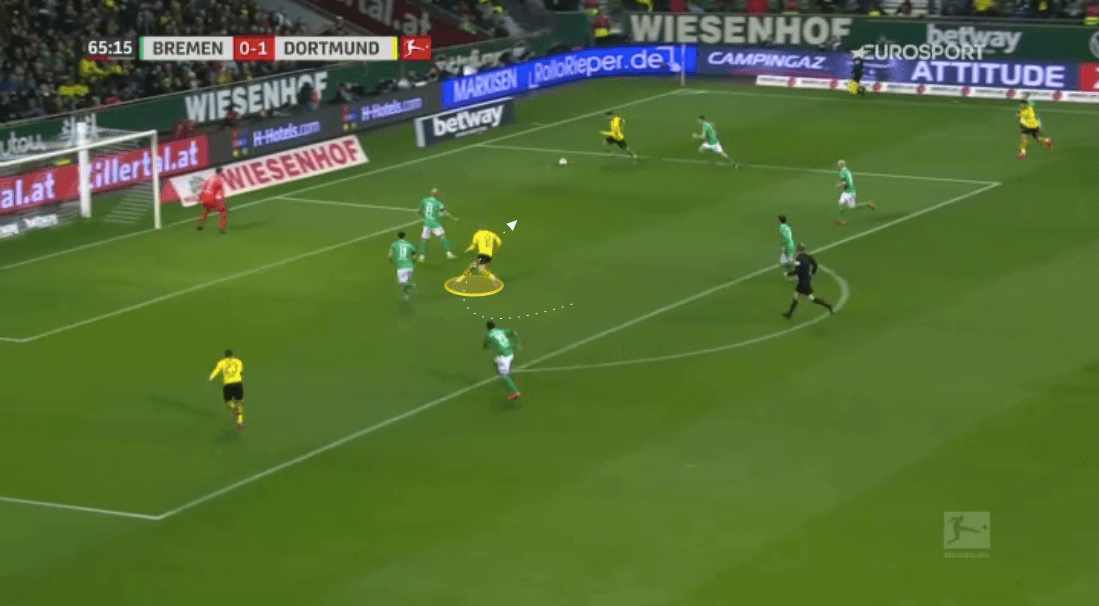 Bremen were particularly focused on attacking the left flank. This may have been down to identifying Hakimi and Łukasz Piszczek as an area to attack, or perhaps it was down to Raphaël Guerreiro’s deeper positioning on the other side, as mentioned earlier. 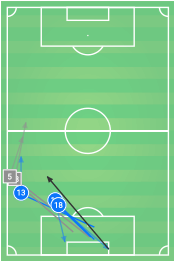 Nevertheless, all of Jiri Pavlenka’s short passes went to Bremen’s left side as we can see in the image above.

Bremen looked to hit crosses from the left side, with all of their crosses in this game coming from that side. Augustinsson and Rashica combined for eight crosses between them from the left side, managing three successful crosses between them. But whether this was just the wrong approach, or whether Dortmund defended admirably from this side, the image below shows how despite having 14 positional attacks from the left flank, Bremen mustered a total 0.02 xG from these. From the right side we can see despite half the amount of positional attacks, they managed a 0.51 xG from attacks on this side. 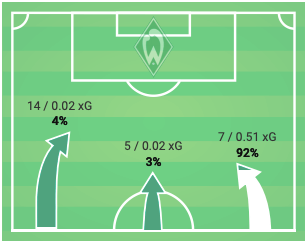 Despite having far less possession than Dortmund, with just 36%, Bremen continued to look to use Florian Kohfeldt’s preferred way of using passing football to break down the opposition defence. With the ball in the opposition half, their back three were positioned inside, and should the ball be cleared by Dortmund, they were quick to jump on the ball and recycle possession, as we can see in the image below. 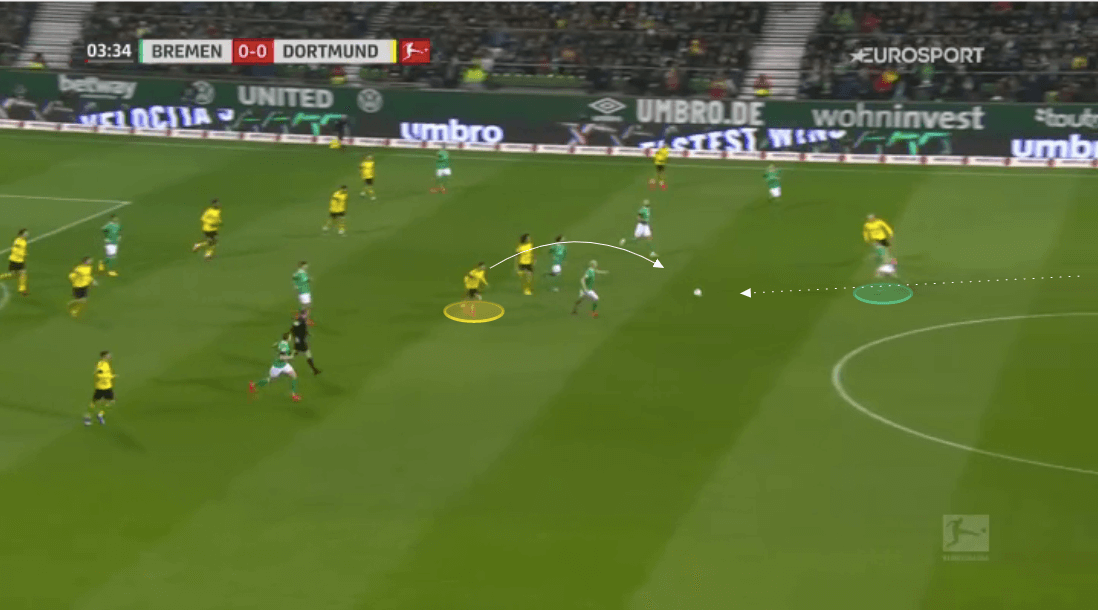 However, Dortmund dropped deep as a unit, and Haaland would drop well inside his own half, as they sought to protect central areas in particular. Dortmund’s advantage in defending this way is that their front three possess such pace that they can transition into attack so quickly, and by luring Bremen’s back three forward in these phases, there was of course space behind them to attack if their midfield and defence could rescue the ball and play forward quickly. 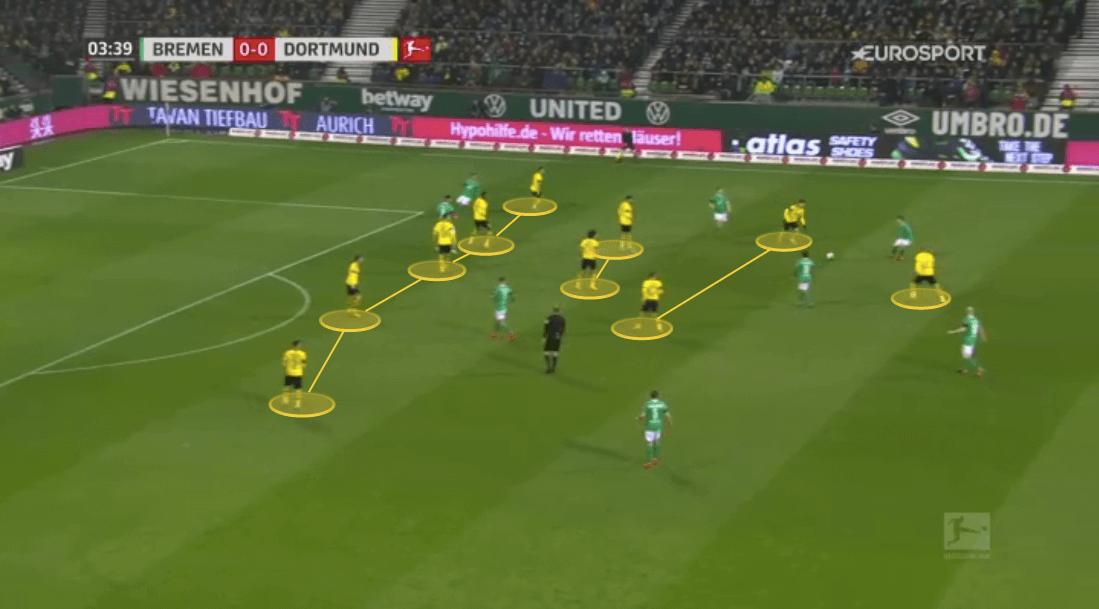 Due to Dortmund dominating in possession, Bremen obviously defended for a lot of the game. Their pressing shape was interesting as they looked to nullify the threat of the Dortmund wing-backs, whilst also protect central areas.

Bremen didn’t press with any intensity, their 14.9 PPDA over the course of the game backing this up.

When Dortmund had the ball inside their own half with the back three, Bremen would maintain their 3-4-3 shape, with the front three sitting in front of Can and Witsel, looking to prevent Dortmund from passing centrally. 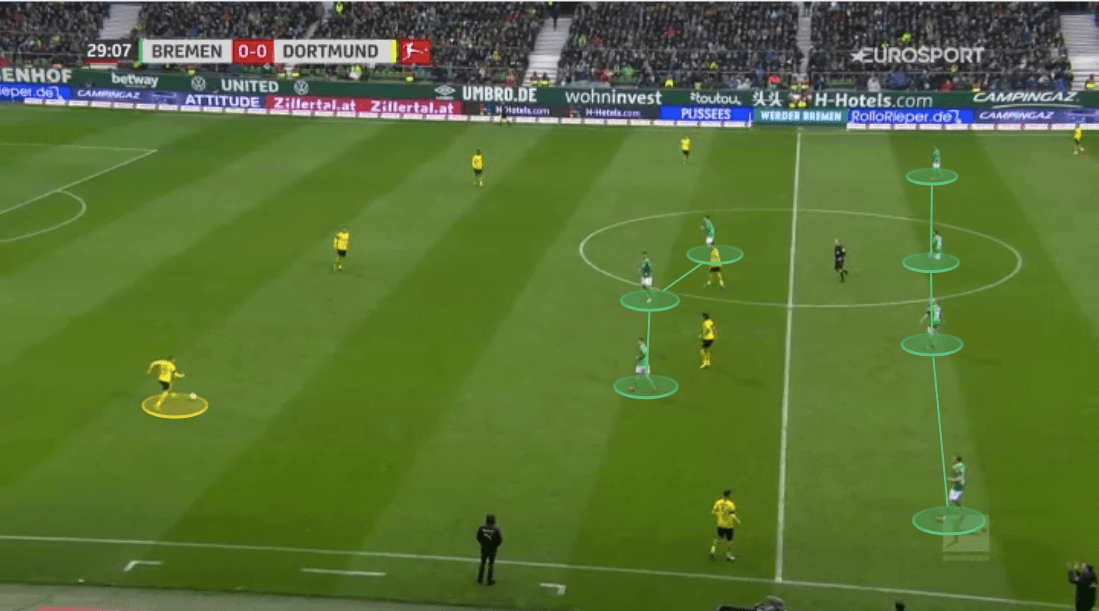 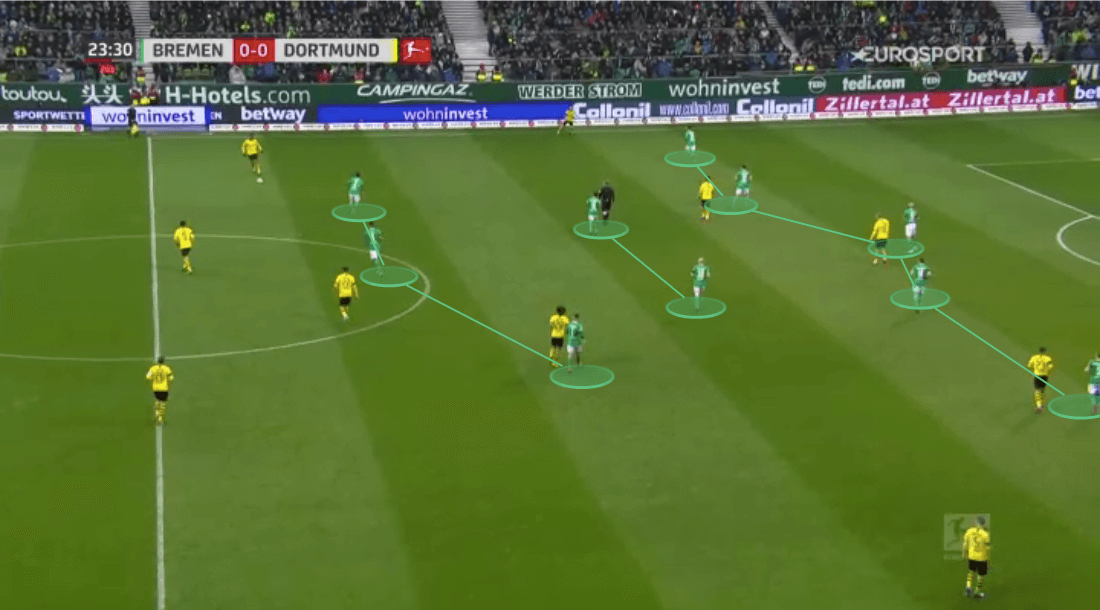 As mentioned earlier, Raphaël Guerreiro dropped deeper, often giving Dortmund a back four shape in possession. By doing this he looked to give Sancho space on his left side. As they passed into the left wing-back, Theodor Gebre Salassie would push forward, and Rashica would drop into midfield, ensuring they still only had a front three and again protected the central areas. 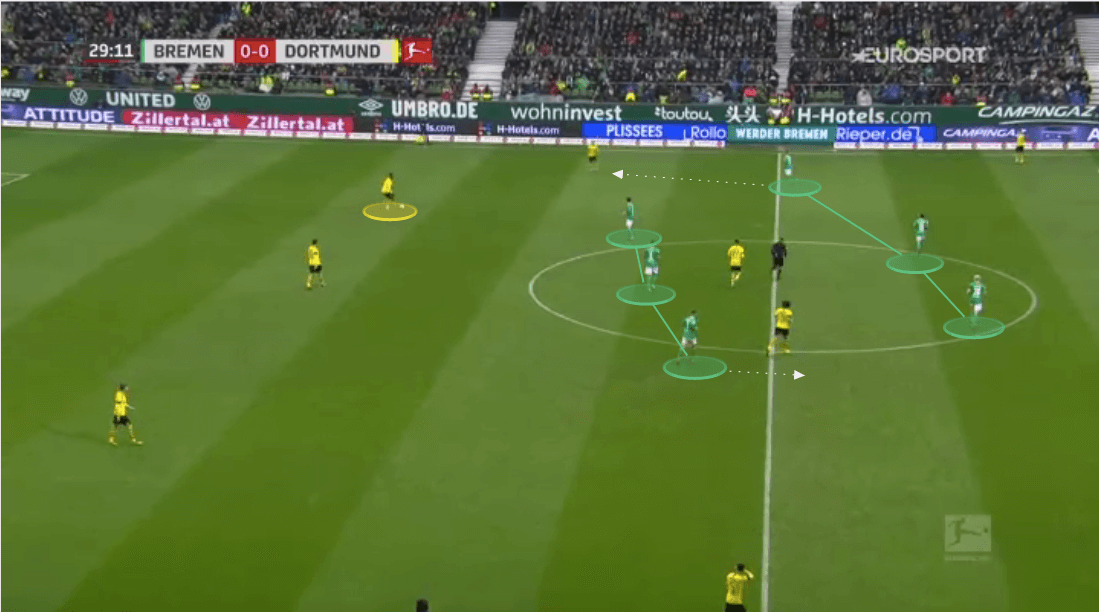 Despite a cagey first half, Dortmund were deserved winners based on their second-half performance. The xG graph below shows how Dortmund (black line) took their two big chances in the game.

In their next five league games, Dortmund will play two of their title rivals, Borussia Mönchengladbach and Bayern Munich, so they can’t afford to slip up in games such as this where they were expected to win. And that they didn’t, as they ended up going back to Dortmund with all three points courtesy of a 2-0 win.