Ligue 1 has been a hotbed of footballing talent over the last few years, with hordes of young players coming through at various French clubs before going on to make their mark elsewhere in Europe. One of those players is Ibrahim Sangaré, who moved from Toulouse FC to PSV in the Eredivisie last summer, following Les Violets’ relegation to Ligue 2. This move came as a bit of a surprise to many in the footballing community, as the Ivorian midfielder was expected to move to another top European league, with reported interest from clubs in the Premier League and La Liga. Many subsequently put this down to a perceived lack of ability on his part, but that is certainly not the case. Due to his physical stature as well as his nationality, Sangaré has been compared to Yaya Touré on occasion, but while the 23-year-old has a long way to go before he can match those claims, he has been playing well for PSV this season, and is showing why those comparisons may not be too outlandish. This tactical analysis piece will look at the Ivorian’s attributes, strengths and traits, and gauge whether he could be in line for a step up to a bigger club sooner rather than later.

Before looking at in-game examples to get a sense of the 23-year-old’s style of play, it is important to consider some key statistics and metrics, in comparison with other Eredivisie midfielders, to understand what he is good at. These statistics have been taken from Wyscout, unless stated otherwise, while we have only considered midfielders who have played at least 1000 minutes in the Eredivisie this season to provide a decent sample size for these comparisons. 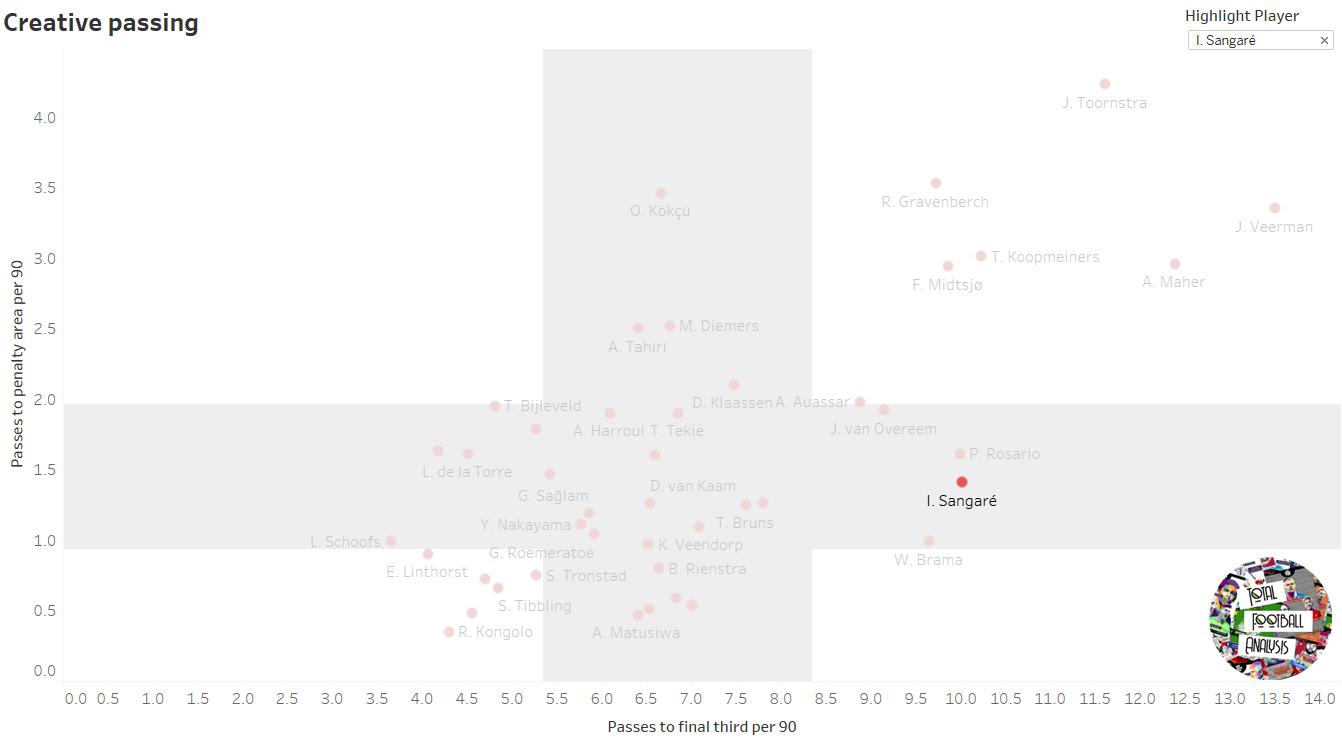 Our first chart looks at the ability to pass into dangerous areas frequently, through passes to the penalty area and passes to the final third per 90. Sangaré is well above the league average for the latter, while being around the average for the former. This shows that while he does make passes in dangerous areas, he is a lot less likely to be the one providing the final ball – it is far more likely that he will recycle possession, or provide the pass before the killer ball is played. 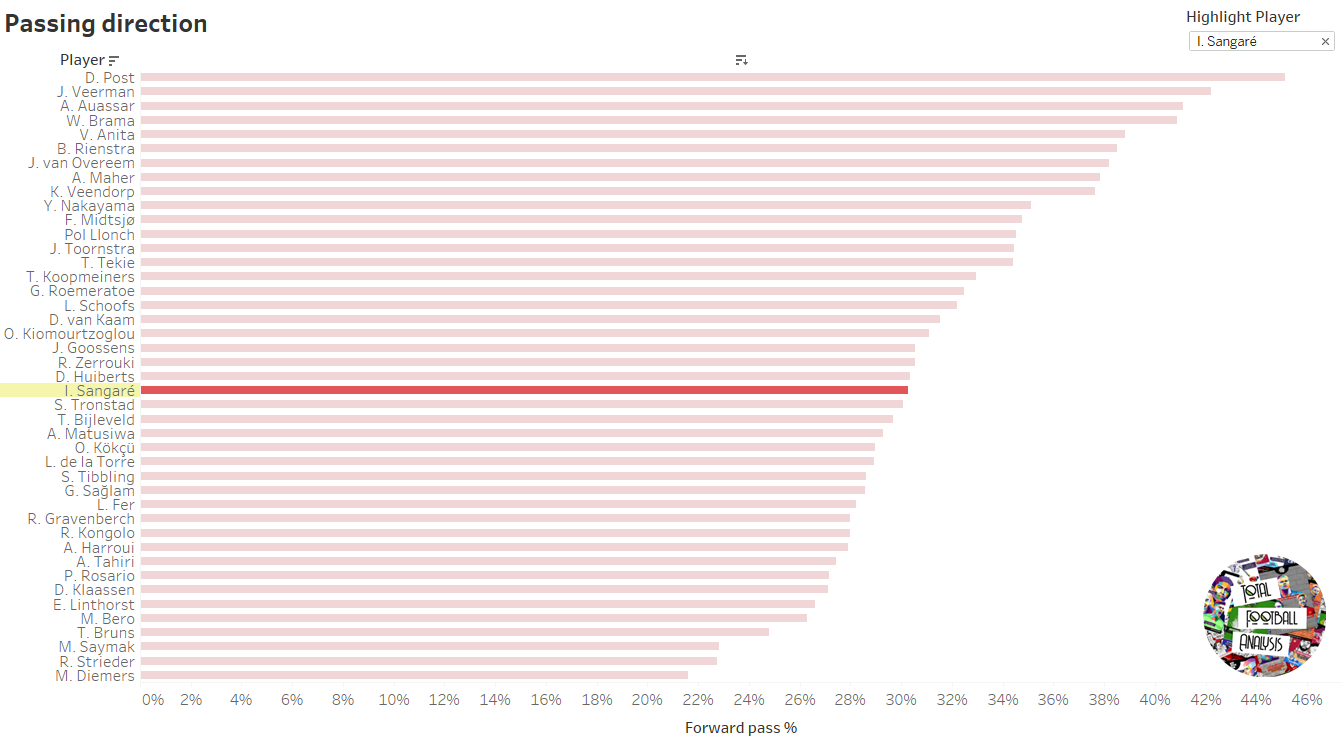 This is borne out when we look at the next chart, which considers the percentage of passes that are played forward by these players. Sangaré has averaged around 30% for this, which again reinforces the idea that the Ivorian will primarily try to keep the ball moving and control the tempo where needed, with the occasional pass forward to try and set up attacks where possible. His overall pass accuracy of 87.06%, allied with the other stats we have seen, is an indication of a player who will largely try to play safer passes, but is not averse to trying more creative and difficult passes when the opportunity presents itself. 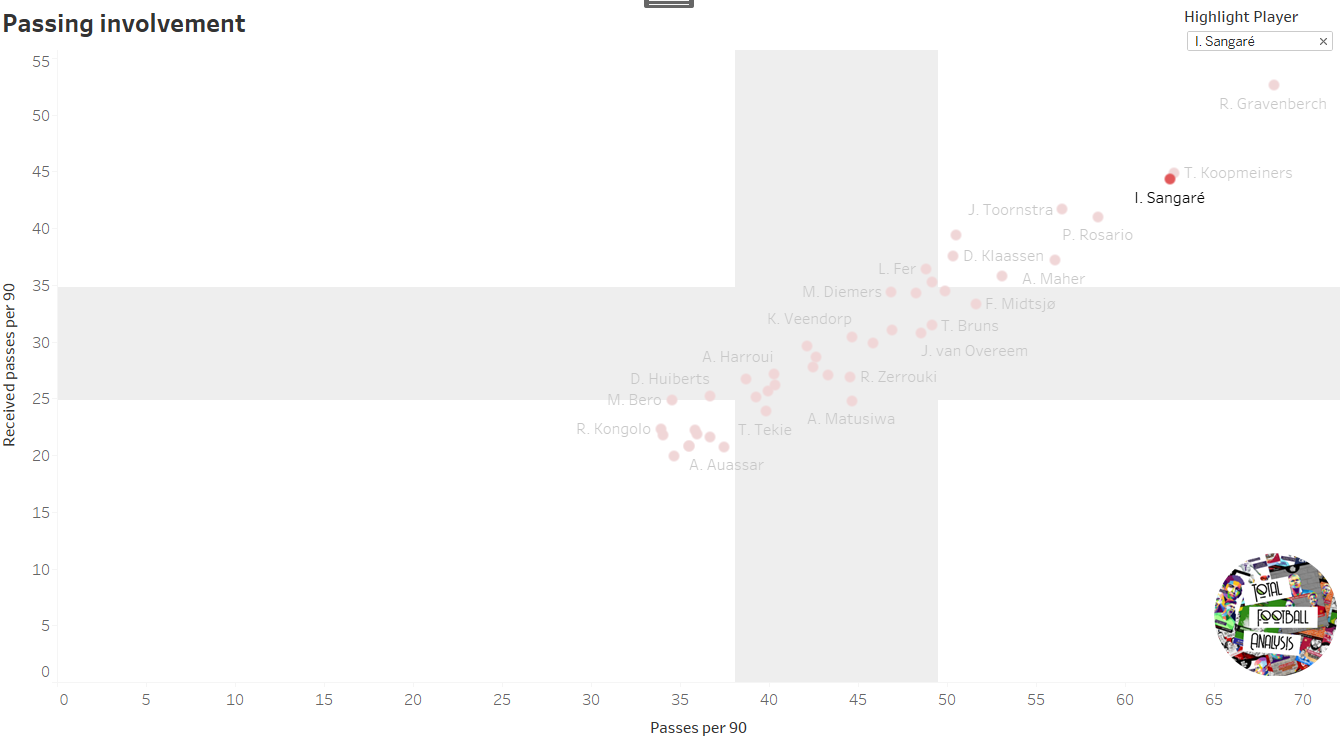 The next chart looks at how involved a player is in their team’s overall possession, by plotting the number of passes they receive, and the number of passes made by them, on a per 90-minute basis. It is immediately obvious that the Ivorian is one of the most involved players in the league by these metrics, and this is further proof that he has been central, quite literally, to PSV’s plans this season. 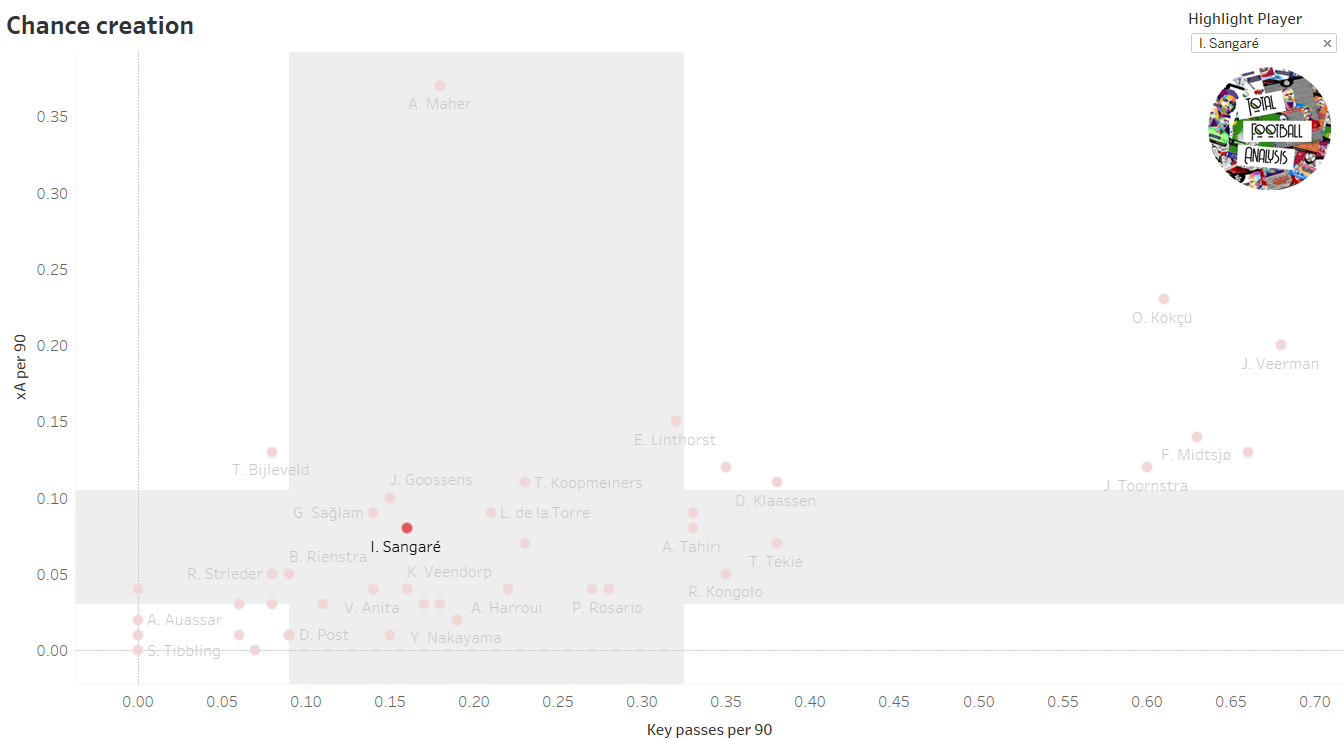 This plot further emphasises this – it looks at key passes and xA per 90, as an indicator of a player’s creative output. Sangaré is around the league average for both of them, which, once again, shows how is certainly not expected to play a primary role in PSV’s chance creation. 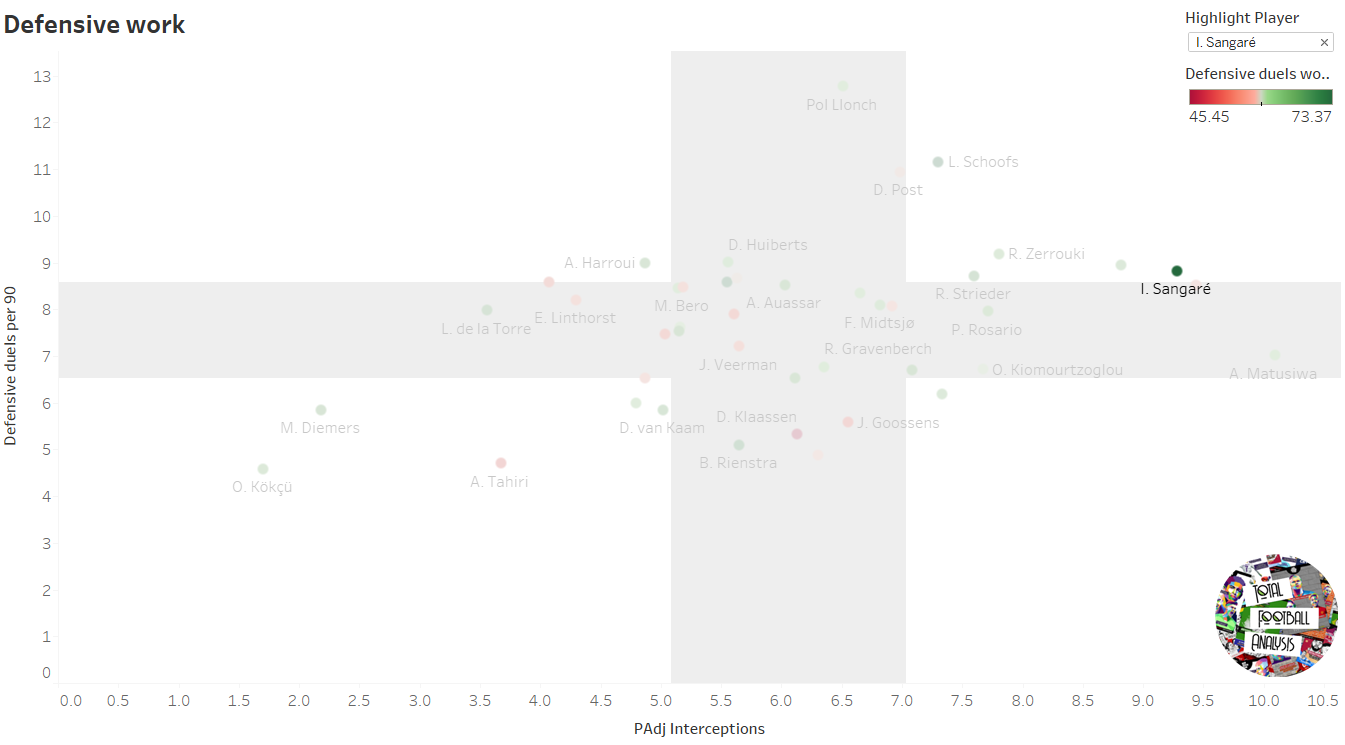 Our last chart in this section considers the player’s defensive style, by looking at defensive duels and possession-adjusted (PAdj) interceptions, while the colour of the plot indicates the success rate for defensive duels. The 23-year-old is one of just four players in our selection who are well clear of the league average for both metrics, and he also has the highest success rate for defensive duels in our selection, with 73.37%. Thus, Sangaré is heavily involved when PSV do not have the ball, and he has been quite good at winning duels and regaining possession for his side.

These charts show how the Ivorian is excellent when out of possession, while largely staying safe with his passing, playing the occasional creative or line-breaking pass when possible.

We will now look at in-game examples to get a better idea of these attributes, both in and out of possession.

Sangaré is a 23-year-old central midfielder, who is primarily right-footed, weighs 77 kgs and is 6’3” tall. These physical characteristics, combined with his skill both on and off the ball, make him an excellent player in the middle of the park, capable of fulfilling multiple roles. 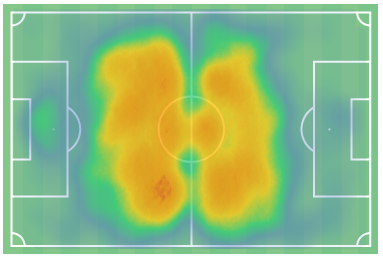 His heatmap for this season shows how he has occupied the middle third for PSV, also getting out to the flanks when needed to support attacks as well as provide defensive cover. He has been fielded on either side of PSV’s double pivot, as well as in a three-man midfield on occasion.

Sangaré plays the simple passes frequently and well, with a remit to keep the ball moving and retain possession, especially in his own half. He also looks to switch play from one side to the other in order to change PSV’s point of attack, although these are usually conservative passes that find the full-back rather than being played over longer distances to the winger, as the next couple of examples show. 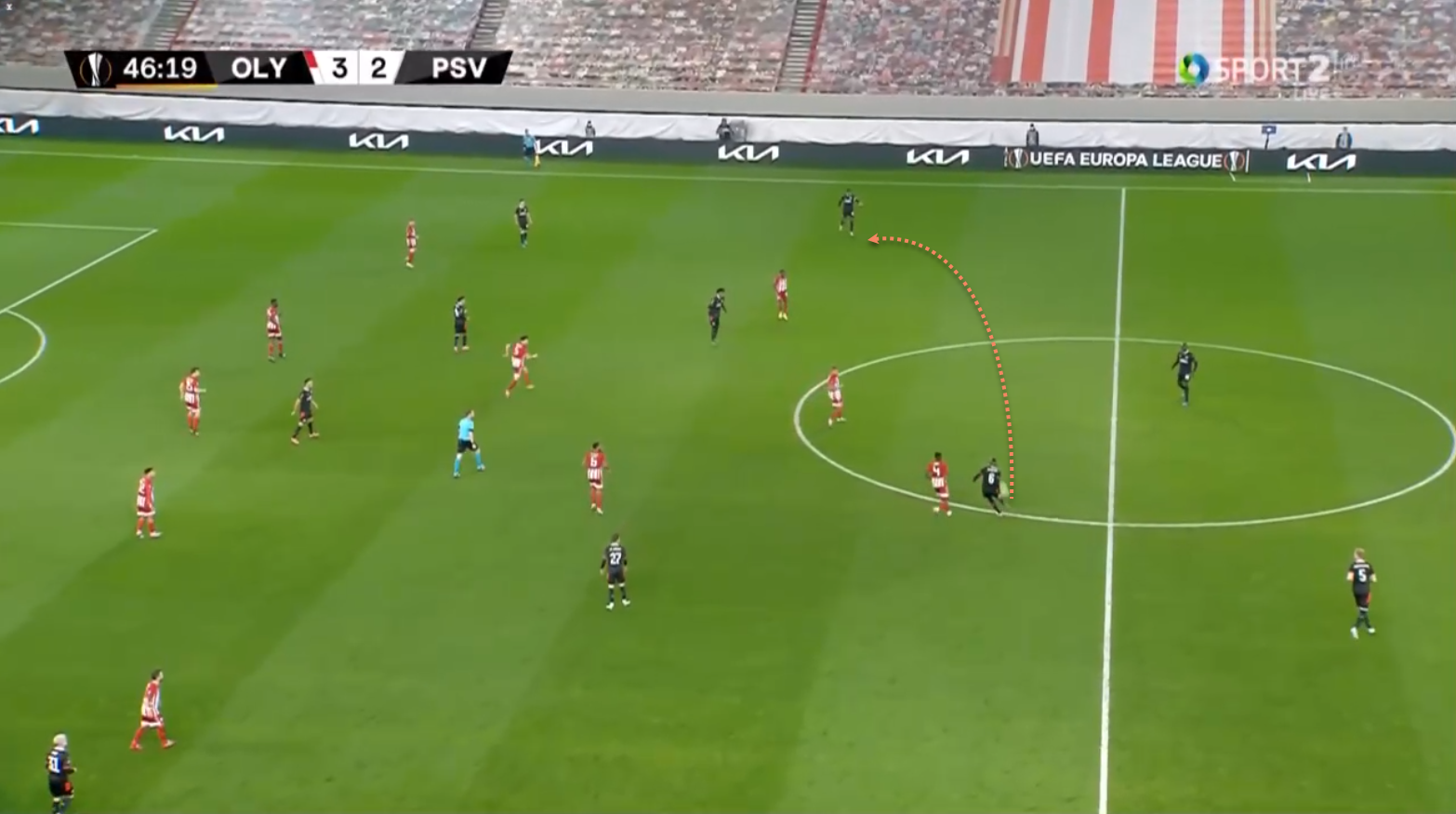 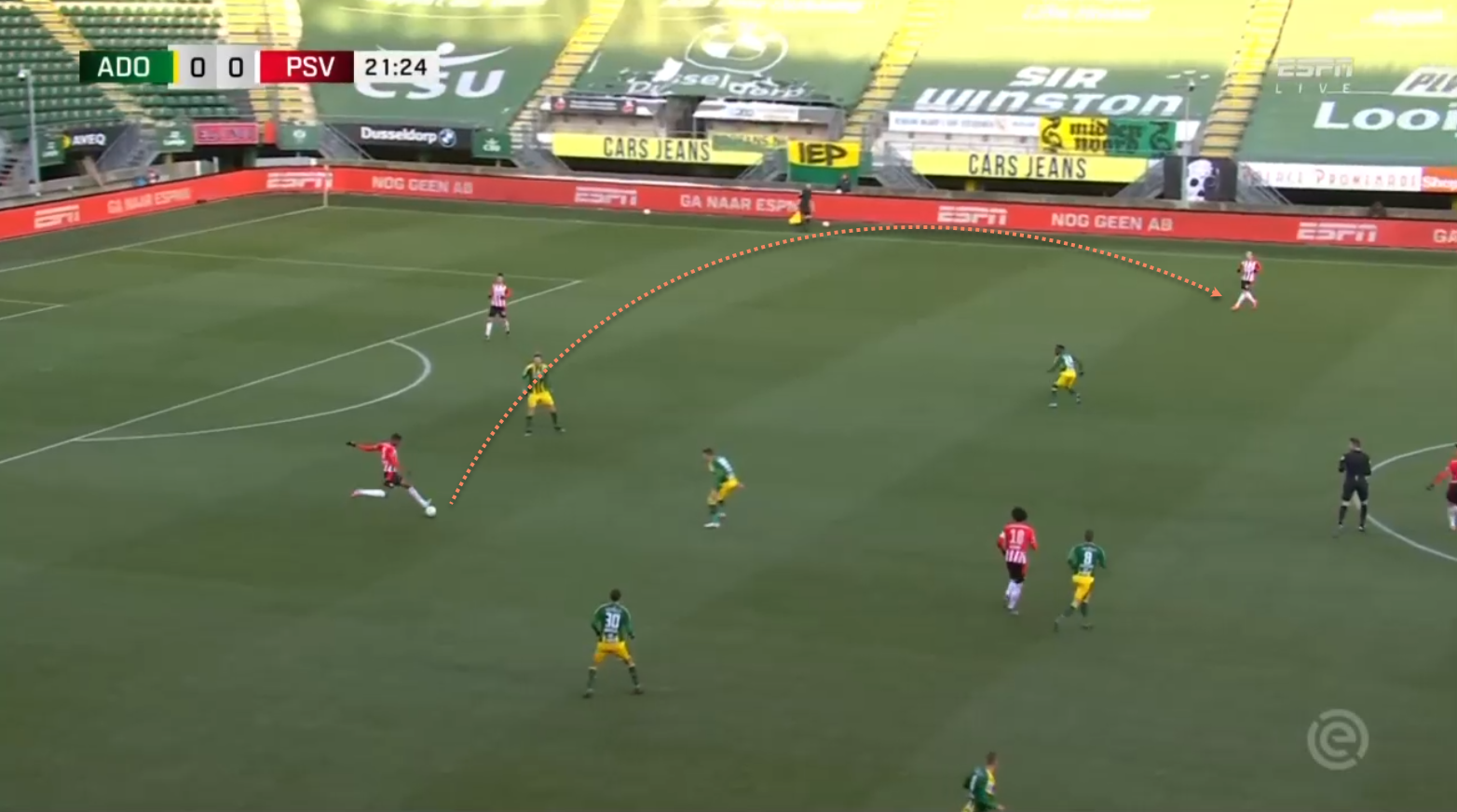 One of his strongest suits is his agility and skill on the ball to get away from onrushing players and run into space. Sangaré is adept at opening his body up to receive possession on his back foot, to give himself more space and create more angles to release the ball, while he can also leave opposition players wrong-footed with a sharp turn. The 23-year-old often utilises these attributes in his own half to get away from pressing opponents, which makes him a crucial part of PSV’s attempts to play out from the back. 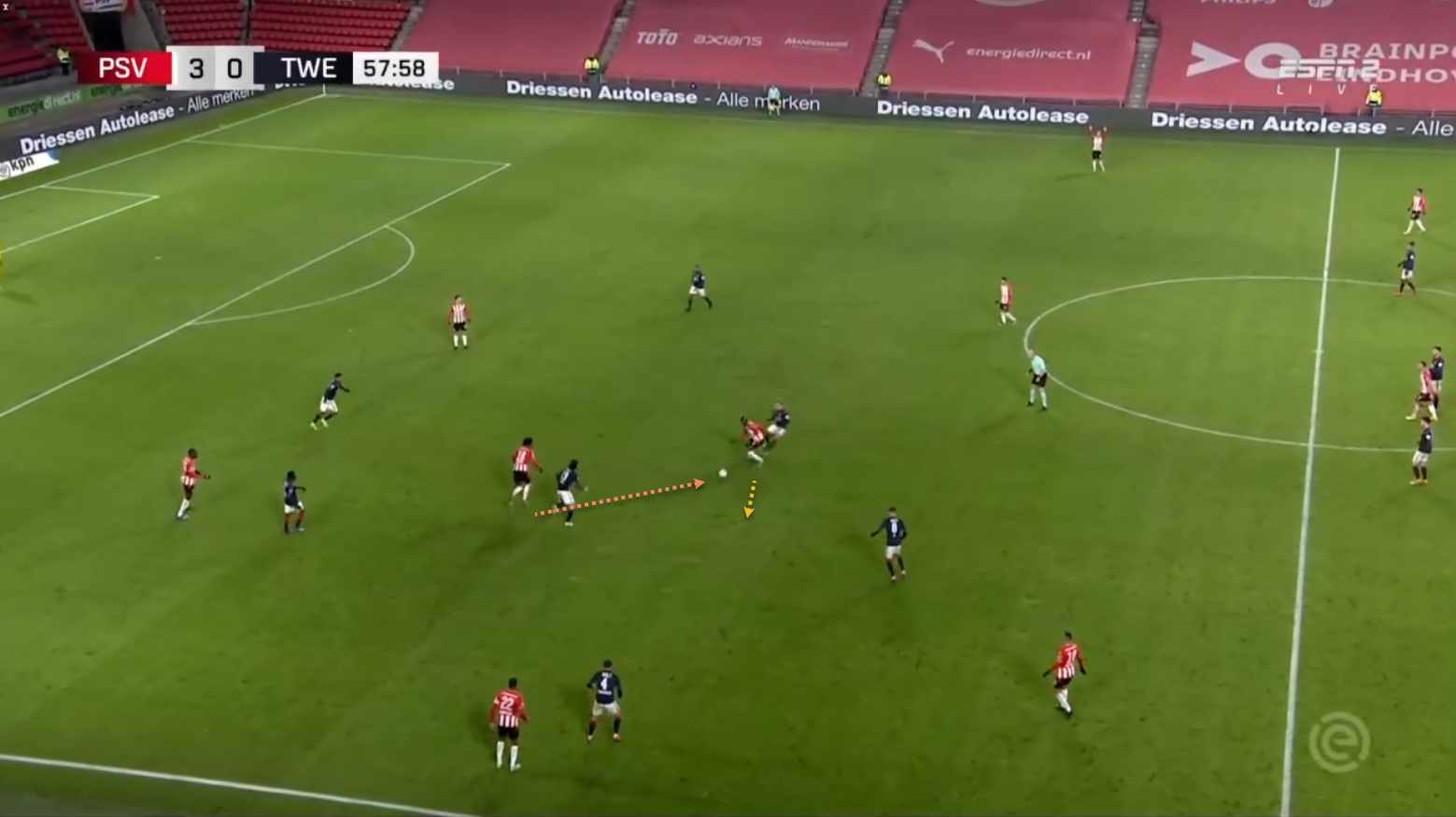 Here, Sangaré plays the ball with the outside of his right foot to knock it into space and away from the opposition player at his back. 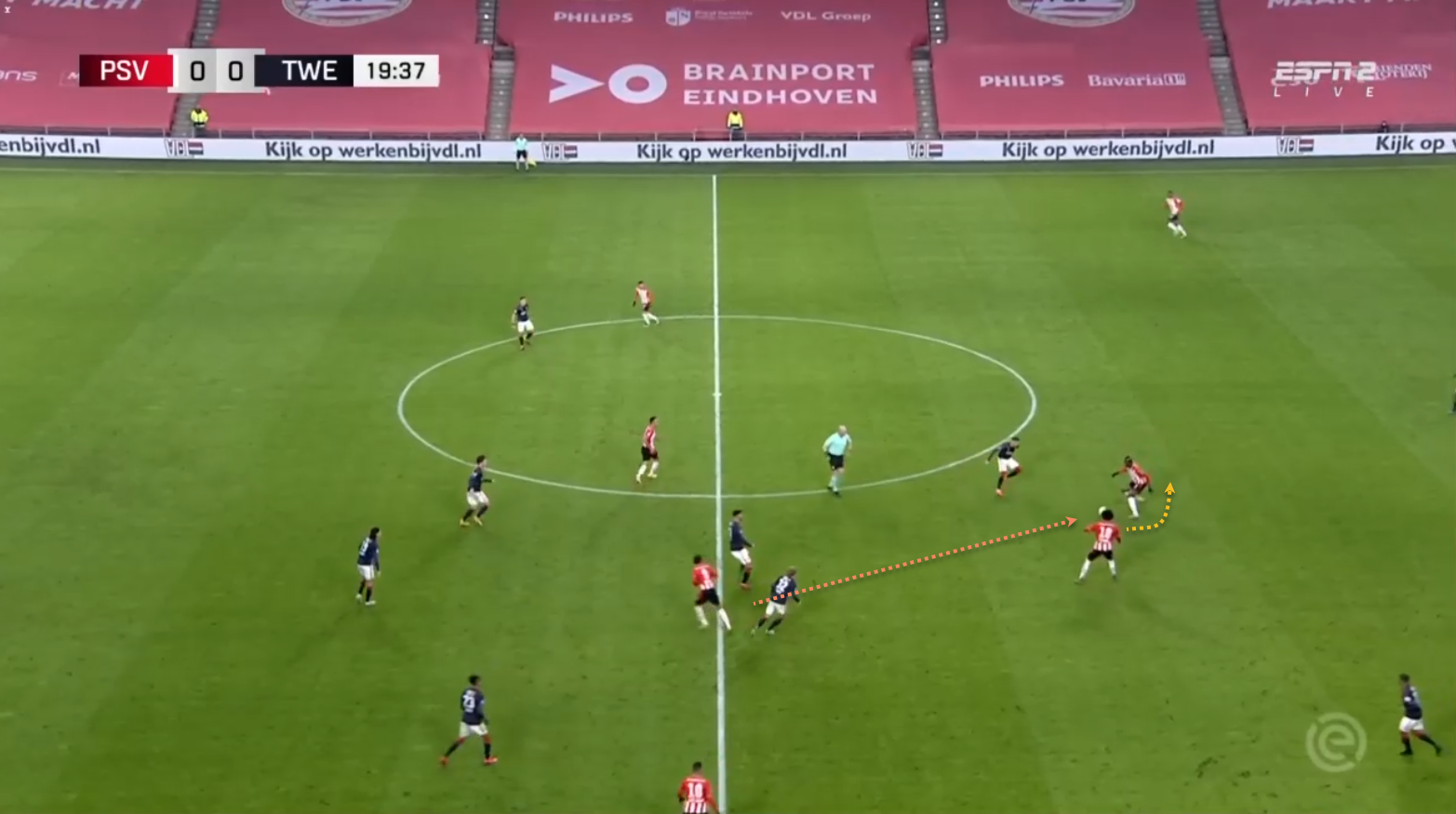 Just before he receives the ball here, Sangaré opens his body up and turns, fooling the Twente player who was rushing to press him. 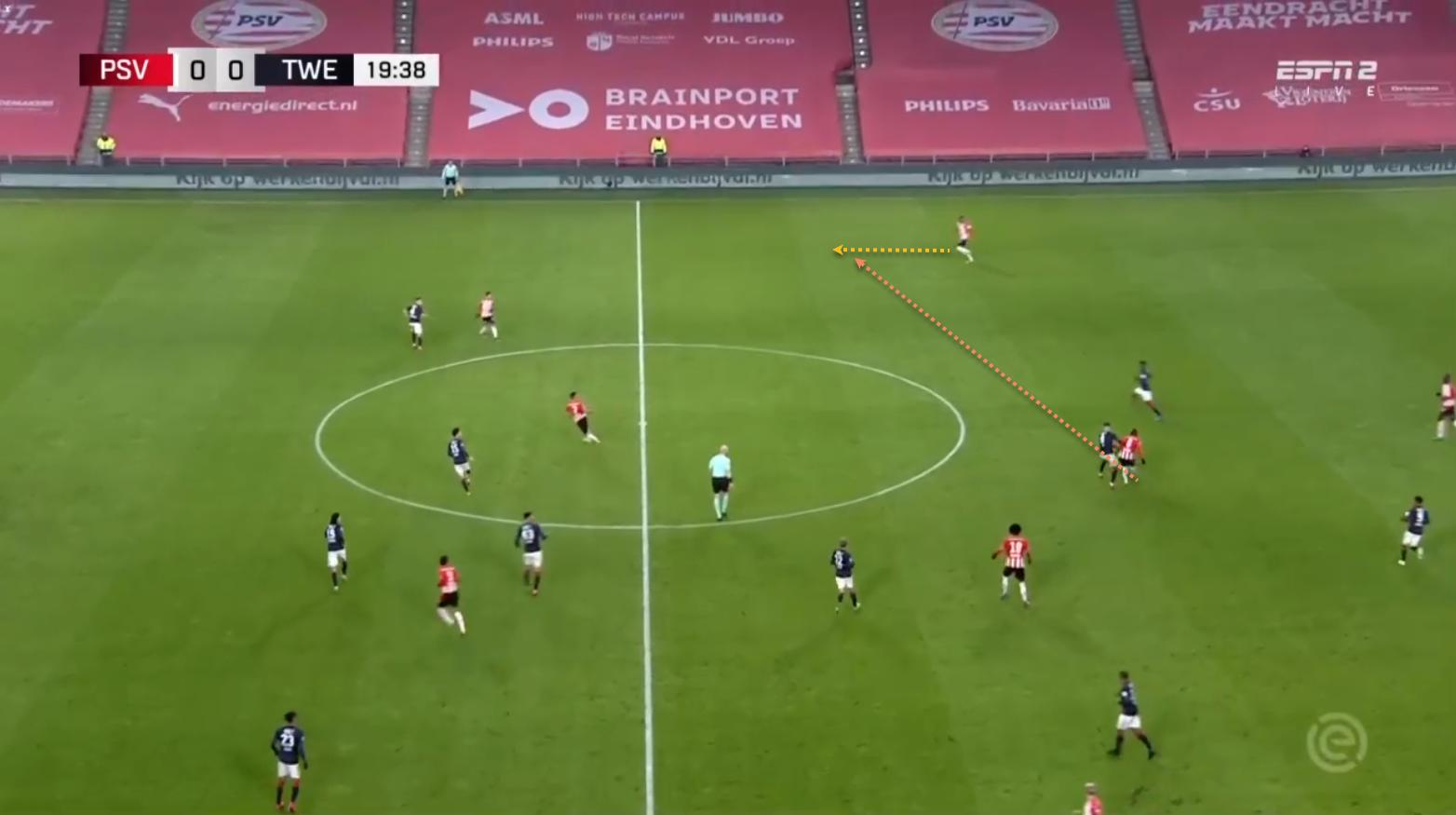 Having found space, he is then able to play the ball out to his right-back.

This excellent ability to glide away from opponents and leave them wrong-footed, combined with his passing, can help open up opposition teams. 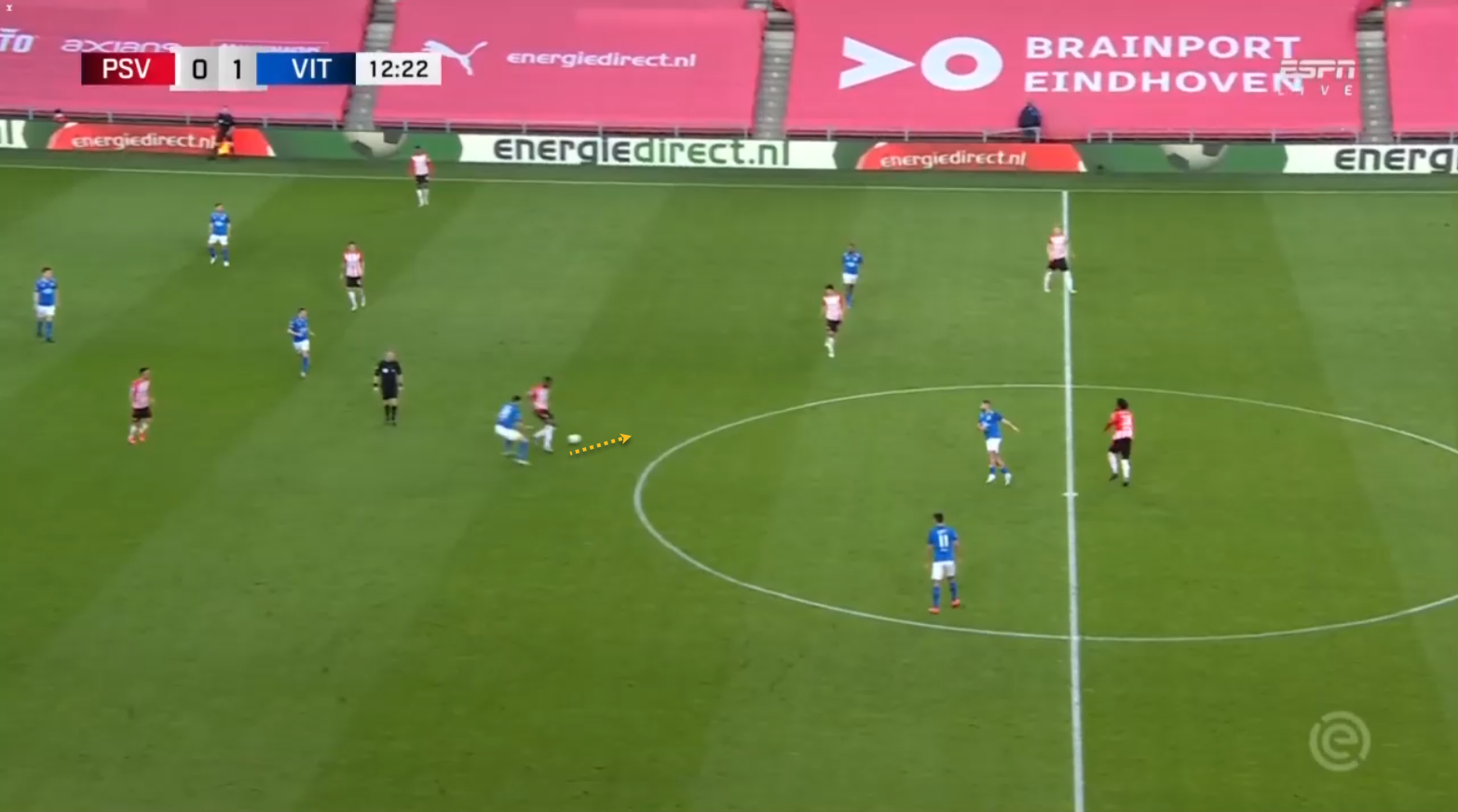 Sangaré moves the ball to the right when he receives it, drawing the Vitesse player in. 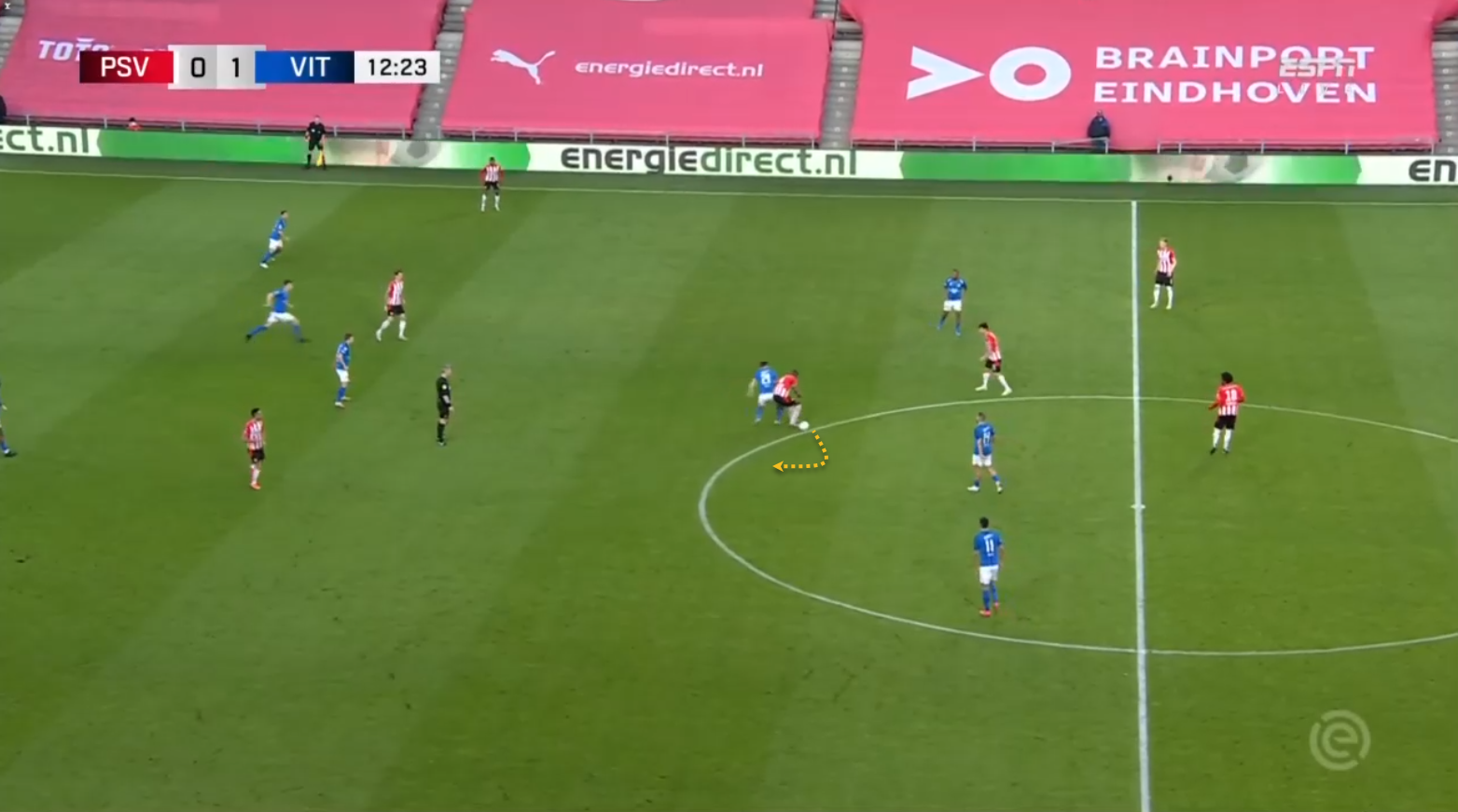 He then uses the outside of his right foot to shift the ball back to the left, turning in the process and leaving his marker behind. 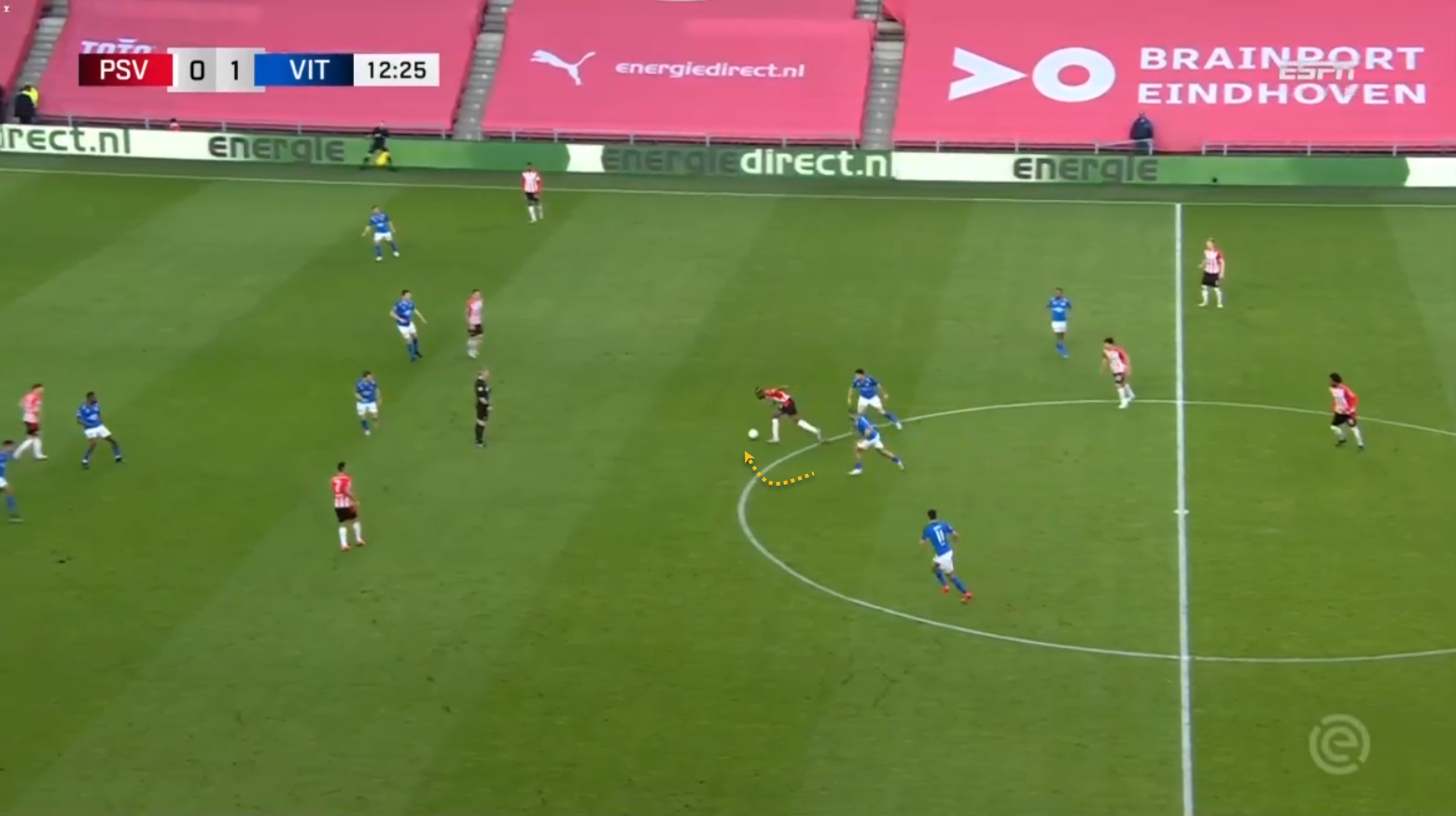 A final flourish sees him turn once again, with another player attracted towards him, to get away and into space. 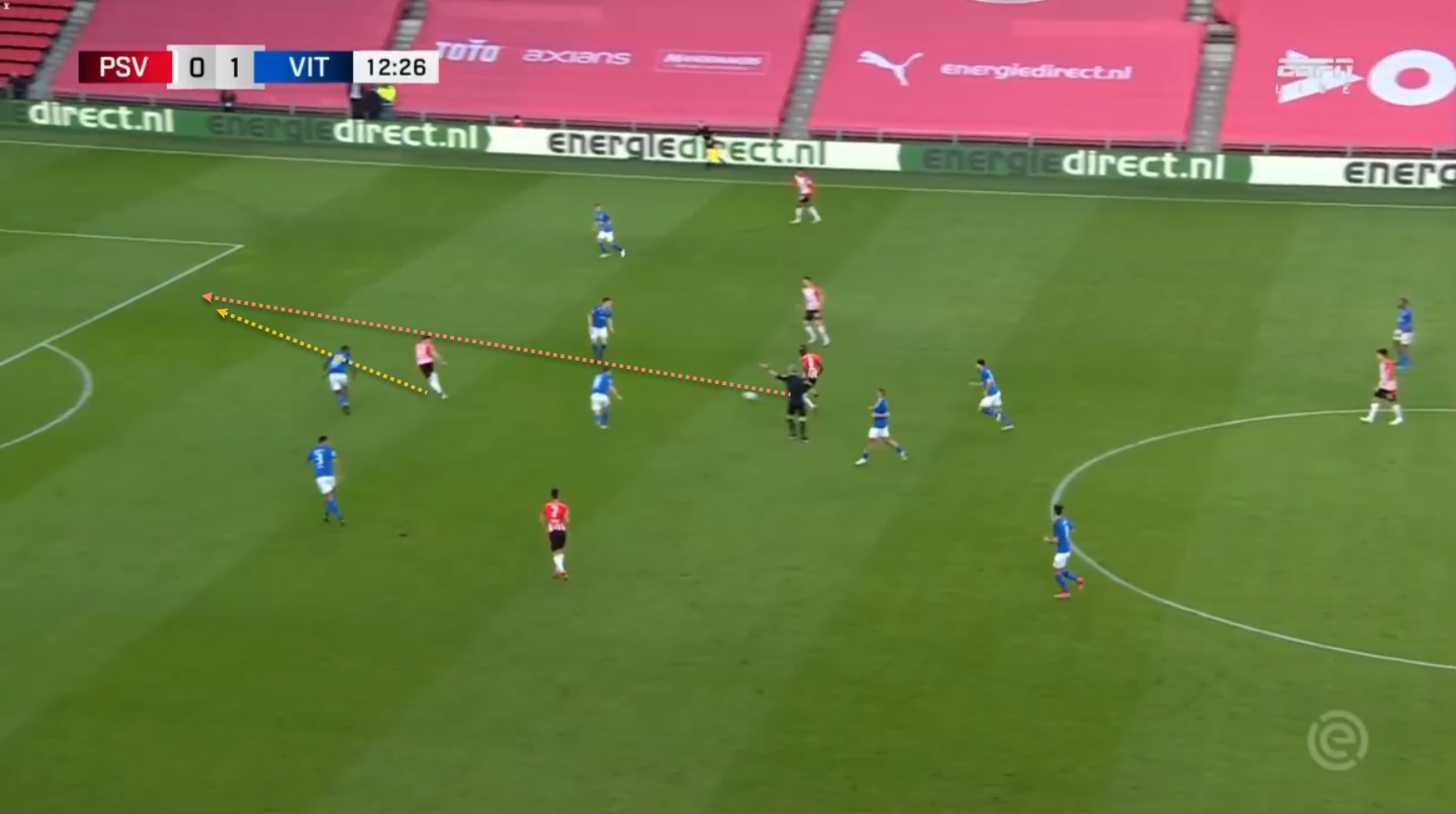 From there, he is able to play a good pass into space for his striker to chase. 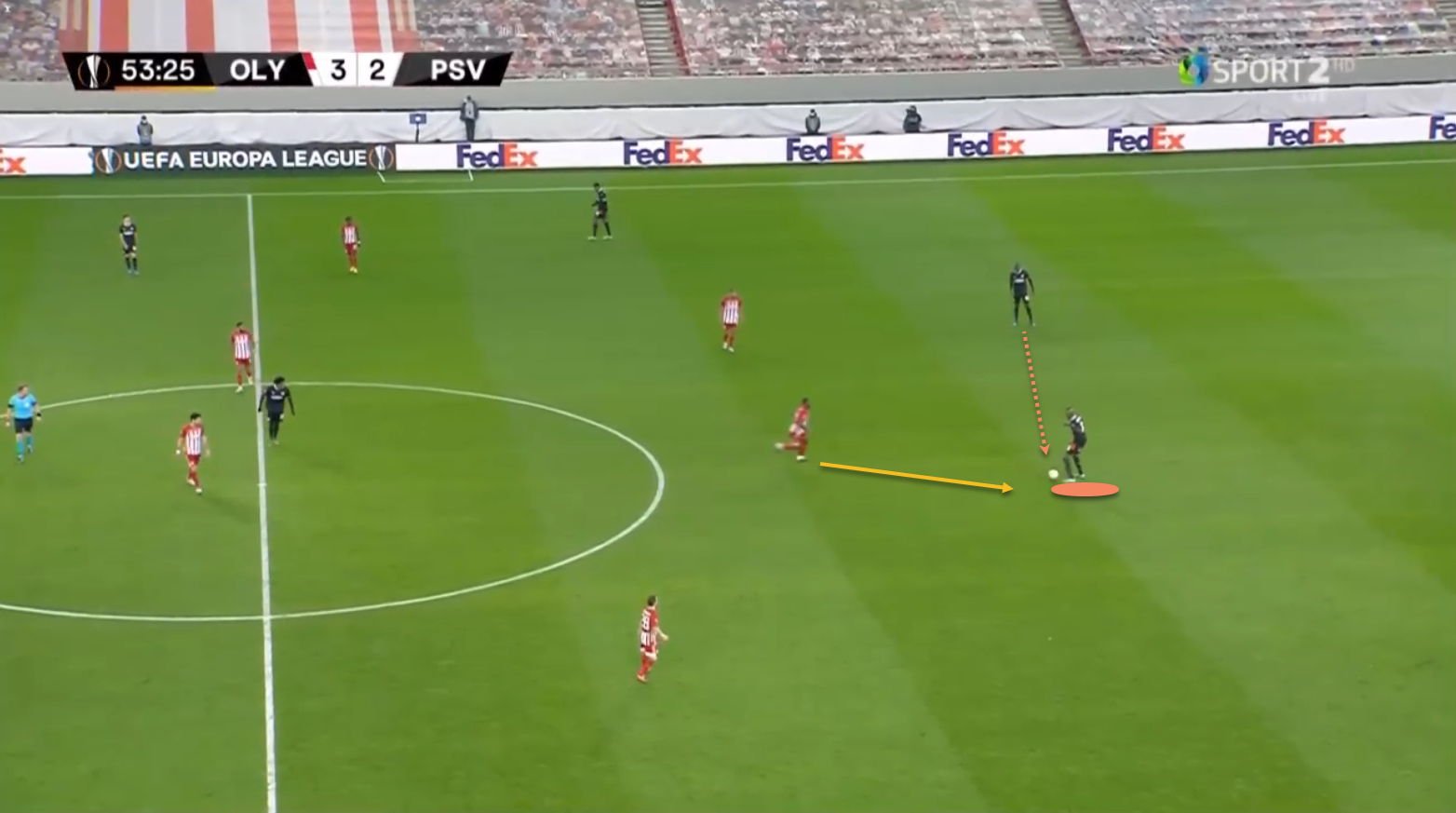 This example sees him in his own half, receiving the ball from his teammate, which immediately triggers the opposition player’s press towards him. 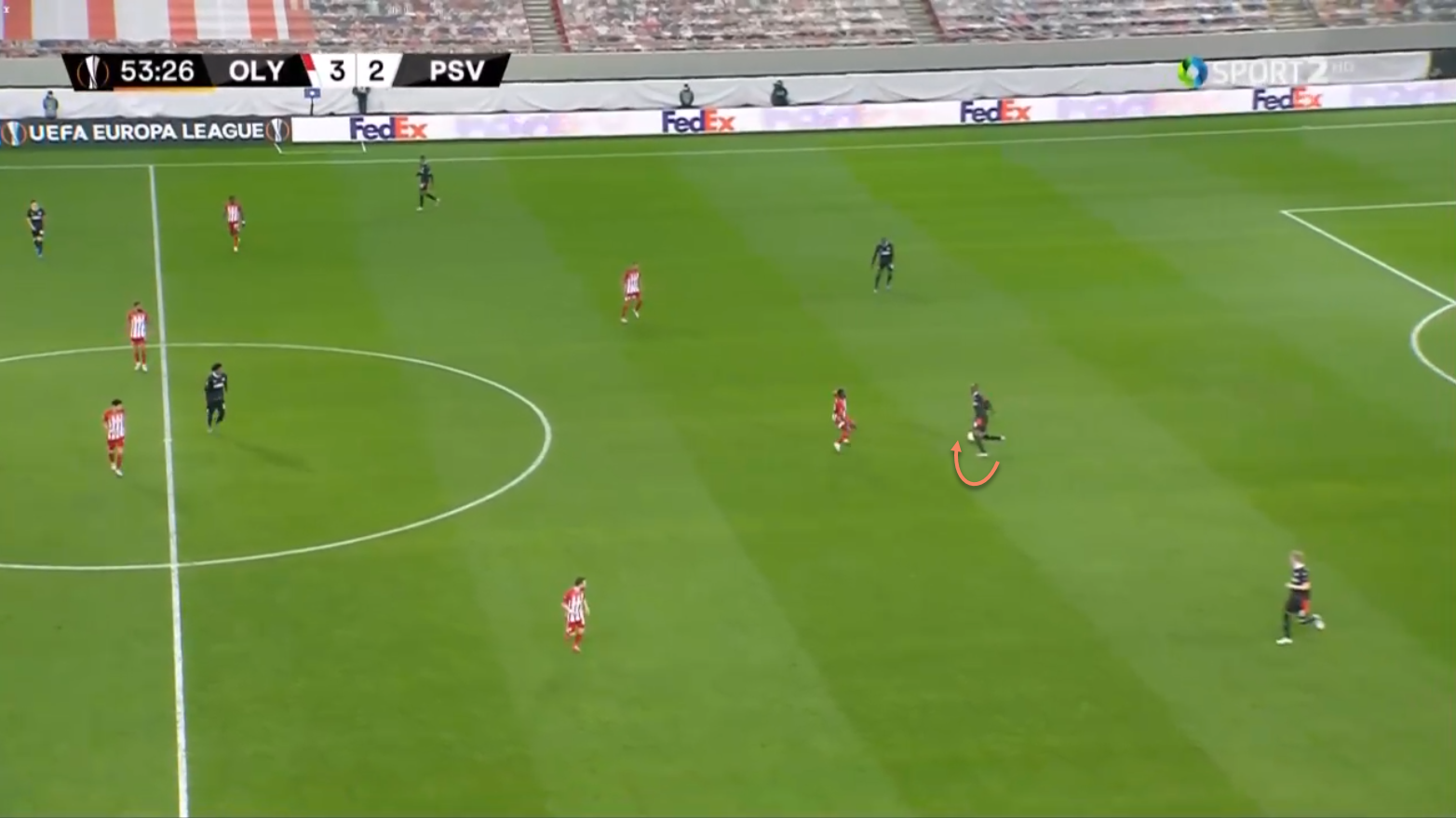 Having received the ball on his left foot, he waits for the player to close in before shifting it to his right, which puts his opponent off-balance. 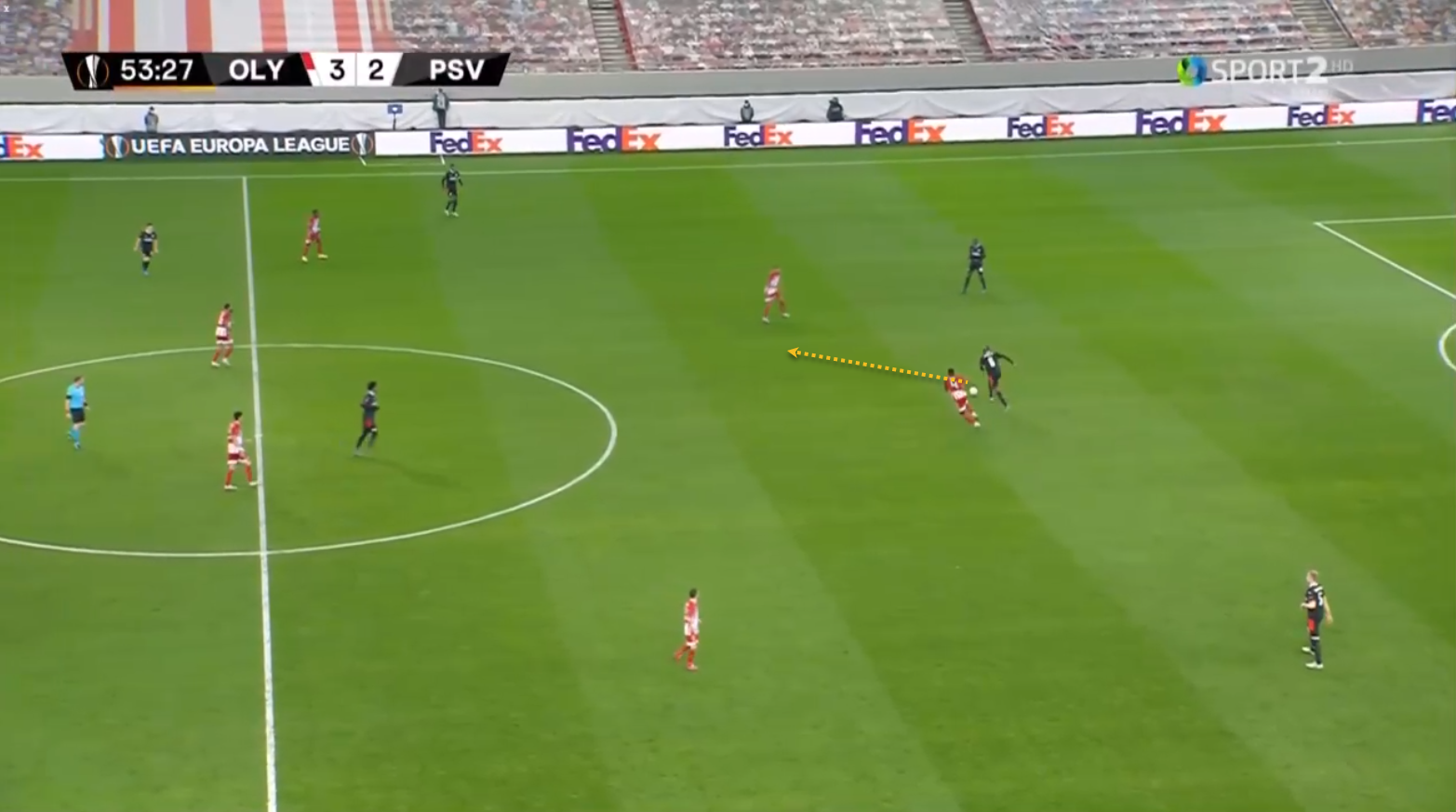 Once again, this gives him the space to drive into on the ball… 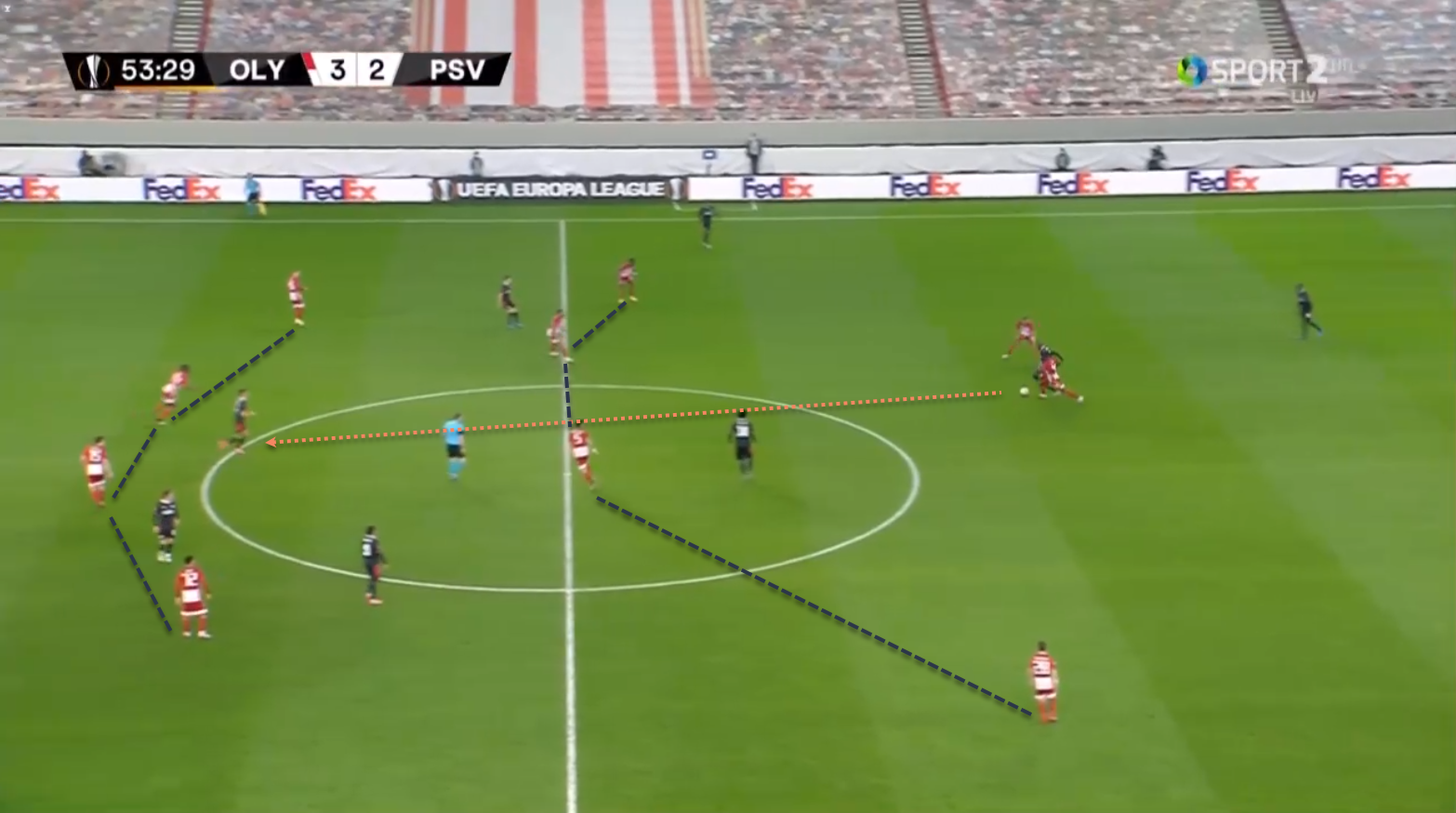 …from where he plays a good pass through the lines to the PSV striker.

This sequence of images shows Sangaré’s ability to attract players towards him and then go past them, which means that he is subsequently in space. The Ivorian attempts 2.39 dribbles per 90 according to Wyscout, with a success rate of 62.7%, and this is undoubtedly one of his strongest attributes.

Sangaré is far from the finished product at this moment, especially in possession. The 23-year-old can give the ball away on occasion, misplacing relatively easy passes, while he can also pick the wrong passing option on occasion. Nevertheless, he is good enough most of the time to keep possession well, while, as we have seen, he is extremely dynamic and press-resistant, which allows him to move into space frequently before moving possession on.

Sangaré is certainly a big part of PSV’s defensive system, as he largely stays in the defensive and middle thirds of the pitch, and is therefore one of the first players to engage with the opposition in the event of an opposition counter-attack. As with his work on the ball, he does need to improve this side of the game as well, but he has largely done a good job of protecting his defence this season. 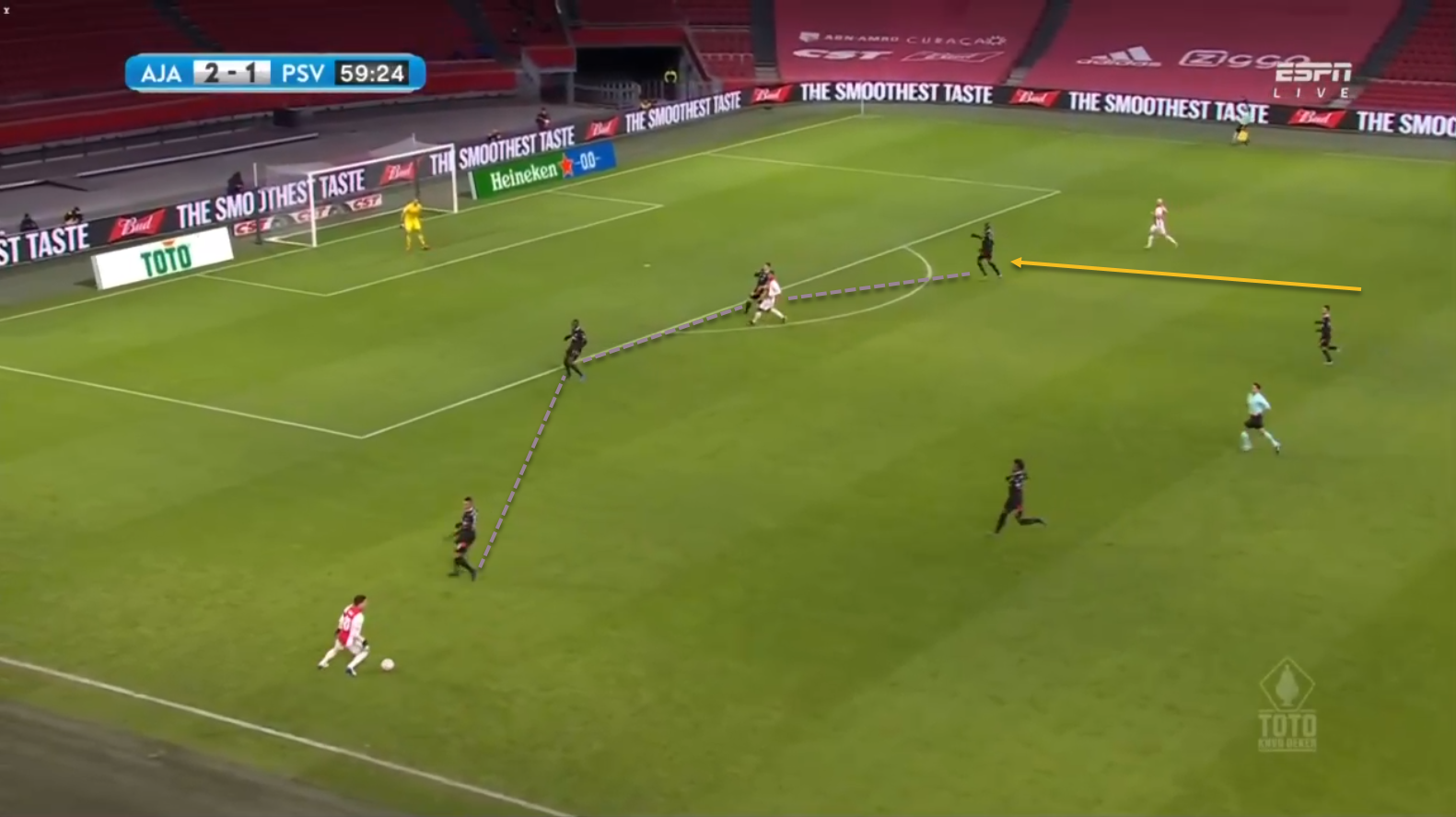 Here, he can be seen filling in at left-back during an Ajax counter-attack, having dropped in from midfield in the absence of his teammate who was caught upfield. This trait is often seen, with the Ivorian dropping into the backline on multiple occasions when PSV are left short-handed in such situations.

Another side of his game that must be mentioned here is his aerial ability. Standing at 6’3”, he is more than capable of holding his own in aerial duels, and can therefore often be found in the PSV box to defend crosses when the opposition have sustained spells of possession, and are trying to cross frequently. He is involved in 4.22 aerial duels per 90, with a 66.4% success rate, which is quite handy and has helped PSV on multiple occasions this season.

Additionally, he has good positional sense, especially when needing to defend the box from wide deliveries, and is able to block opposition players through his positional sense and cover shadow. 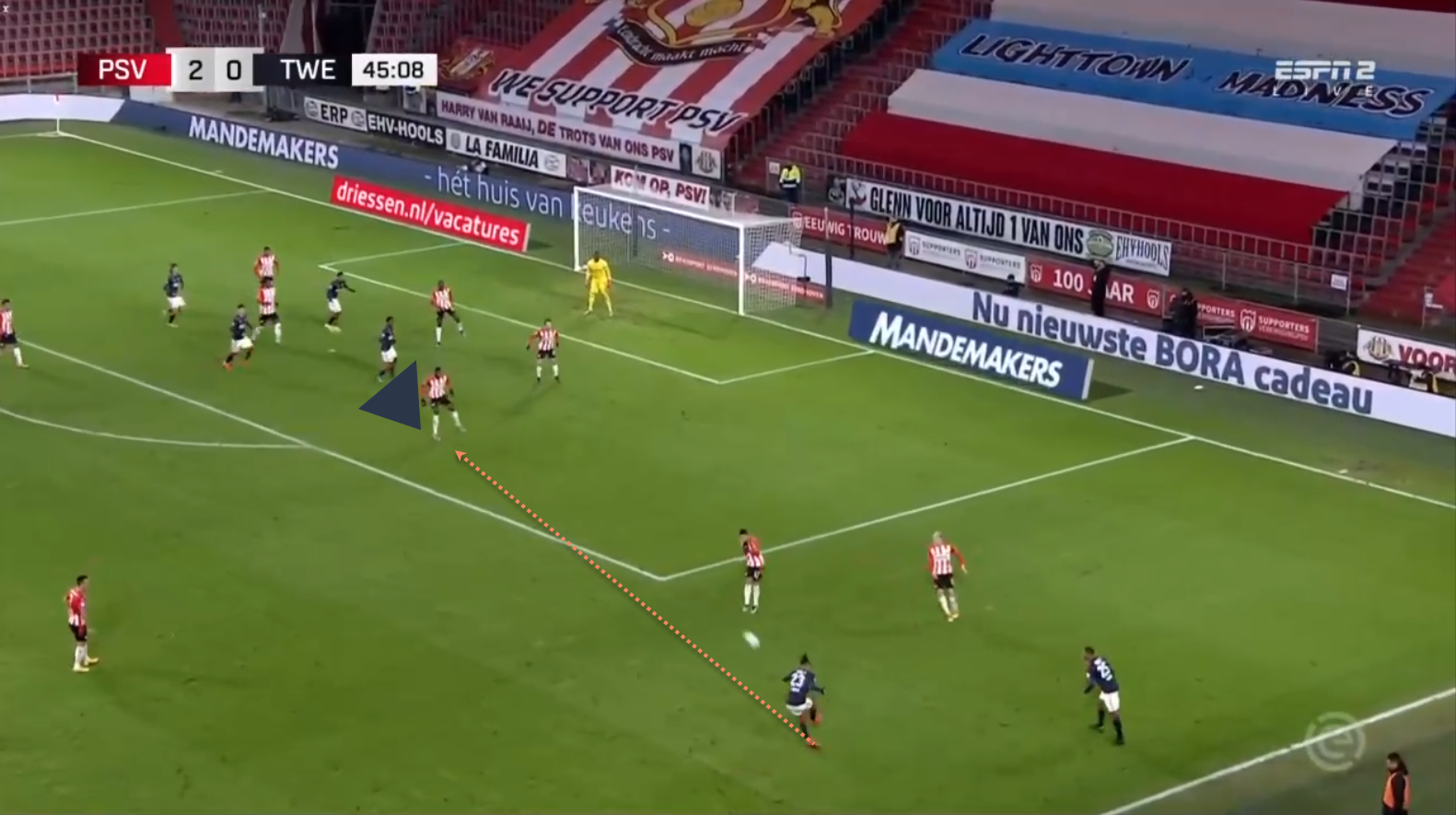 When Twente send the ball into the box from the right, Sangaré has positioned himself in front of the Twente attacker, and is therefore able to intercept the cross. 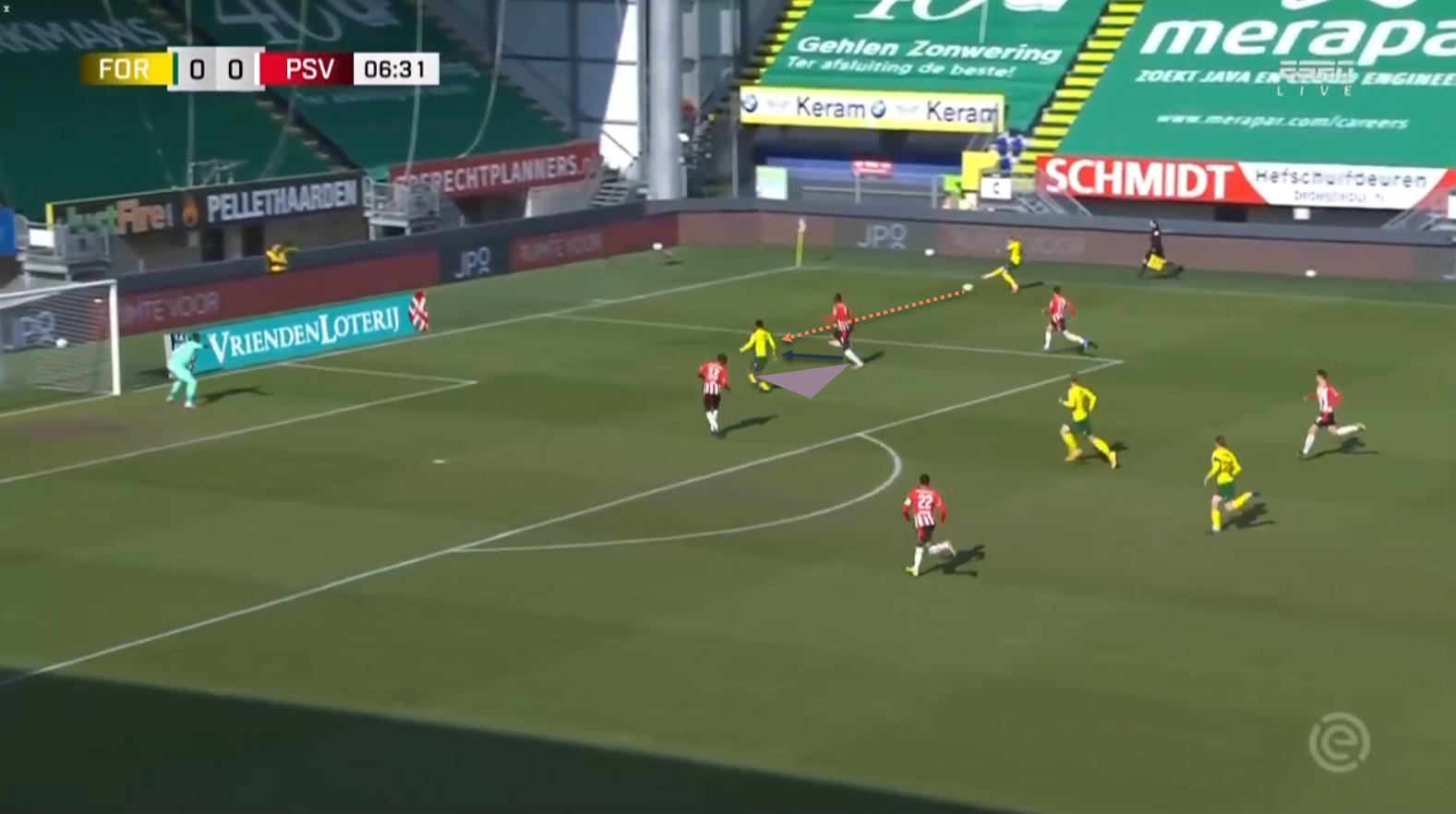 A similar scenario – Sangaré once again cuts out the cross by being in the right place and blocking his opponent with his positioning. 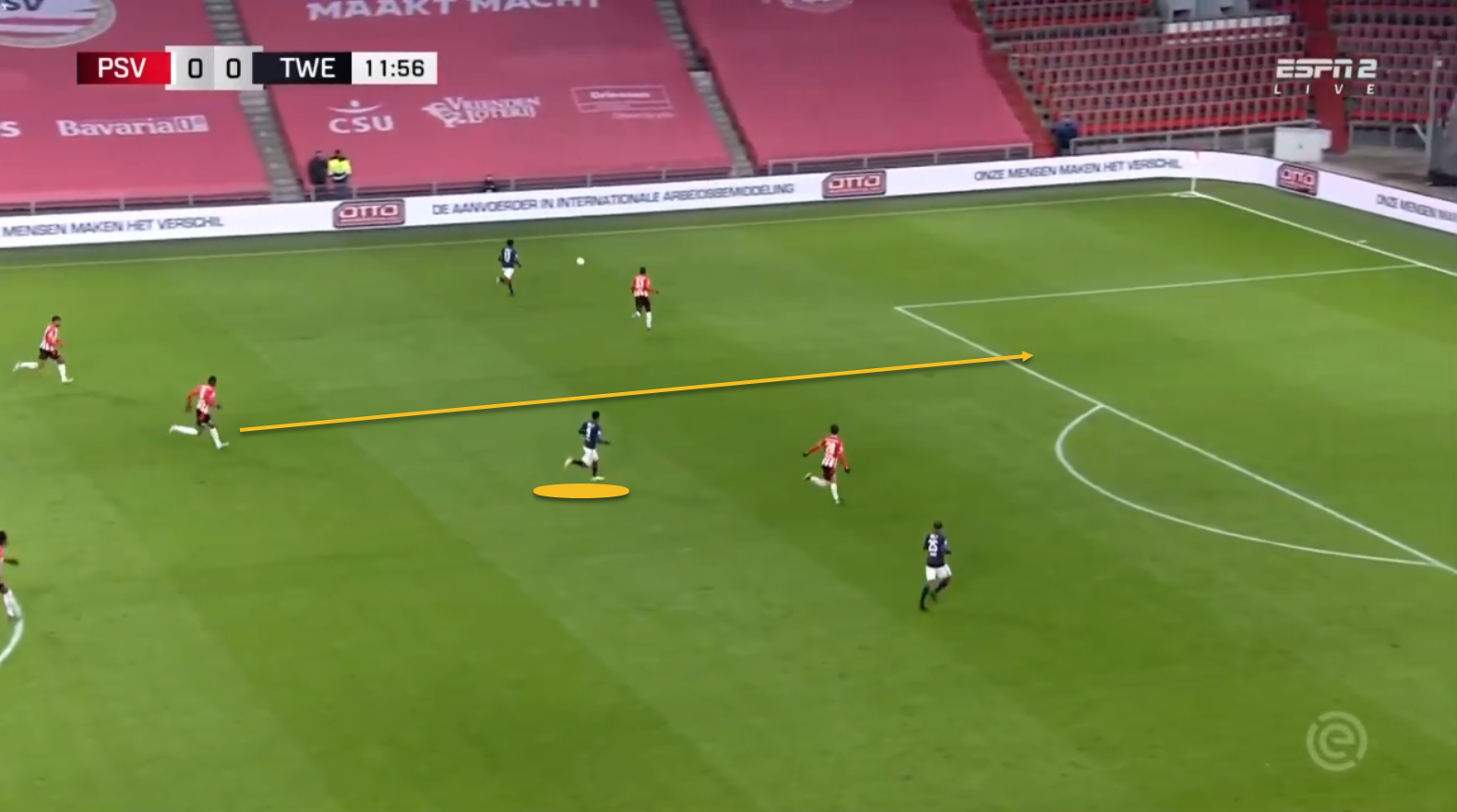 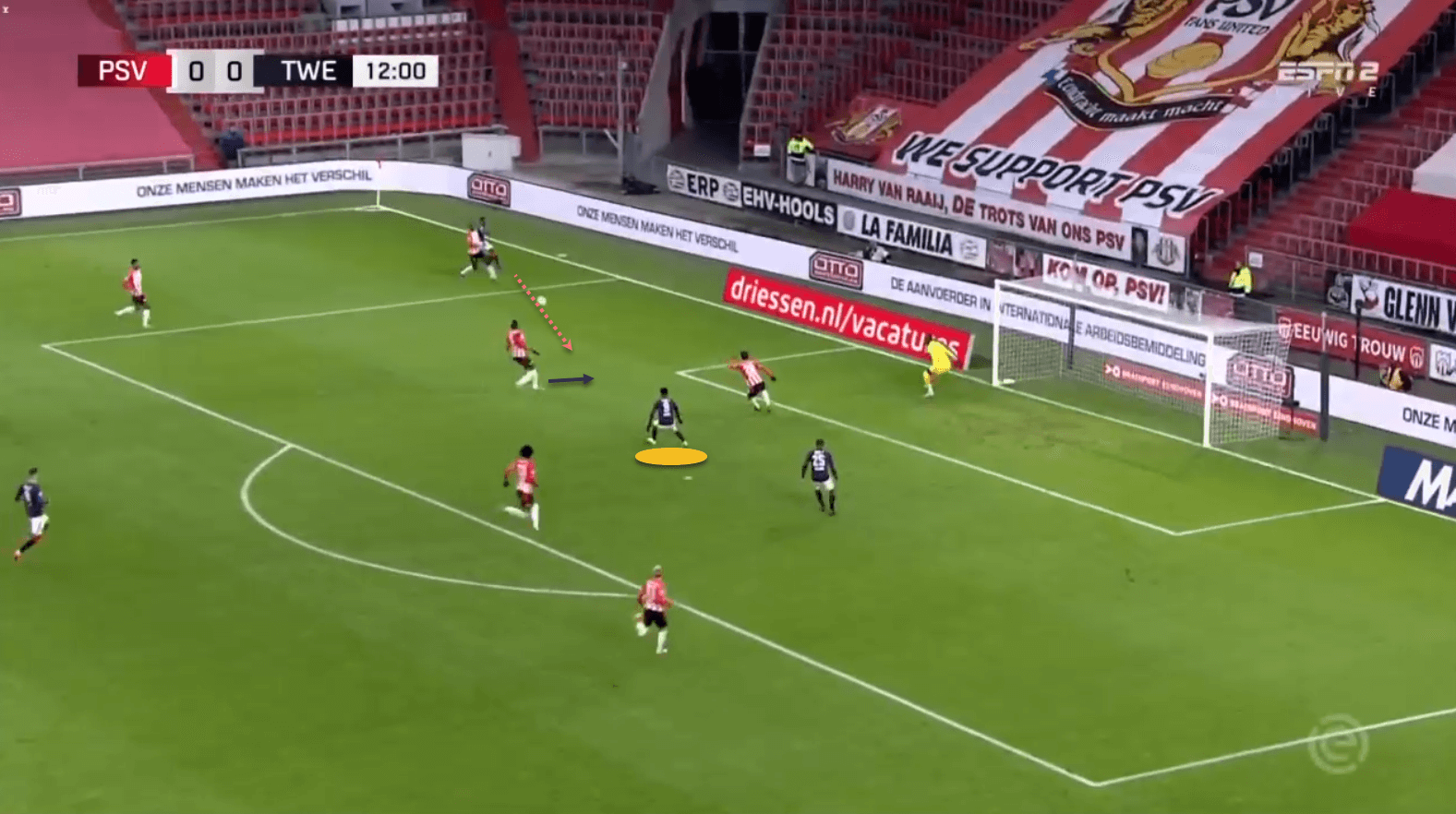 The Ivorian makes a brilliant recovery run here, and is therefore in the box to intercept when the cross is played towards the highlighted player.

The 23-year-old is extremely athletic and physical, which allows him to get back in this manner when PSV need bodies at the back. As stated earlier, he does still need to improve his defensive instincts and positional sense, but he still has time to get better at this side of the game.

Ibrahim Sangaré is an extremely capable midfielder who is having a good season for PSV. He has a good blend of physical and technical attributes which allow him to be used in range of midfield roles, and while he has some work to do on certain aspects of his game, there is no question that he has the potential to be an excellent midfielder in one of the top European leagues in a few years. Do not be surprised to see him linked with a number of clubs this summer, but we expect him to stay put in Eindhoven and continue his development for now. 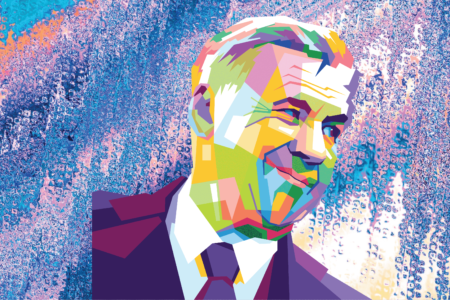