French football has a long history of creating multi-talented midfield players, from the likes of Michel Platini and Jean Tigana through to Patrick Viera and Zinedine Zidane we have seen the country produce players who patrolled the middle of the park with a mix of dogged tenacity and outstanding technique. Now we see the likes of Paul Pogba continuing this legacy with the excellent Tanguy Ndombele waiting for his chance in the wings. The melting pot of French society however also sees a number of young players come through that star for the countries either of their birth or that of their parents.

This is the case for Ibrahim Sangare, the Toulouse midfielder who was born in the Ivory Coast before making the move to France as a youngster. The midfielder made his first-team breakthrough two years ago as an 18-year-old but it was not until the 2017/18 season that he was able to make a significant impact on the first team. Used primarily as a defensive midfielder in the initial stages of his first-team career, he quickly became one of the top tacklers in his position in the French league and opponents found him exceptionally difficult to dribble against in central areas. This season so far has seen Sangare not only build on his defensive output but add a more attacking aspect to his game. Still only 20 the young midfielder is still an exceptional defensive prospect but he has also added the ability to resist the opposition press whilst in possession of the ball as well as the ability to dribble past opposition players. If Toulouse are to have the opportunity to close the gap at the top of the table to PSG then the emergence of players like Sangare will be key.

Physically, Sangare is everything that you might want in a modern central midfielder, standing at 6ft3 he uses his long limbs to hold opposition players off and to manipulate the ball through and around opponents. He also boasts the technical ability to control and manipulate the ball in tight areas of the field as his side enter the attacking phase. In the defensive phase of play, Sangare covers space exceptionally well across the width of the field as he moves to cover for his full-backs who move into high areas of the field in the attacking phase. He is also adept at pressing quickly when the situation arises. Indeed in the defensive phase, we have seen Sangare perform a similar role to the one that the Brazilian midfielder Fabinho adopted at AS Monaco before his move to Liverpool.

In this article, we will take a deeper look at the strengths of Ibrahim Sangare.

For all that Ibrahim Sangare is an effective defensive player who performs well at the base of the midfield unit he also displays an excellent range of passing that can allow his side to access space at either side of the field quickly and effectively. He is still raw and he can make the wrong decision from time to time but whenever Sangare receives the ball his first thought is to look to play the ball into forward areas and to take the game to the opposition. 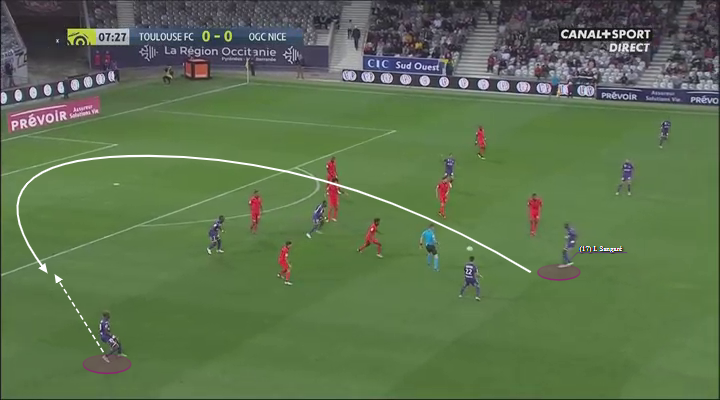 Here, Sangare receives possession following a poor clearance by the opposition as Toulouse start their second phase of play. It is interesting to note that Sangare is very much the central player in the attacking structure from Toulouse and he holds the deepest midfield slot as the controlling midfielder.

As soon as the ball breaks out to Sangare, we see him look to make an immediate first-time pass clipped to the left side where his side has a player in space that can easily attack the edge of the Nice penalty area. In this example the decision making from Sangare is correct, he has read that the defensive block is shifted more over to the Toulouse right with the wide player on that side marked by an opposition player. The man on the left side though is completely free. 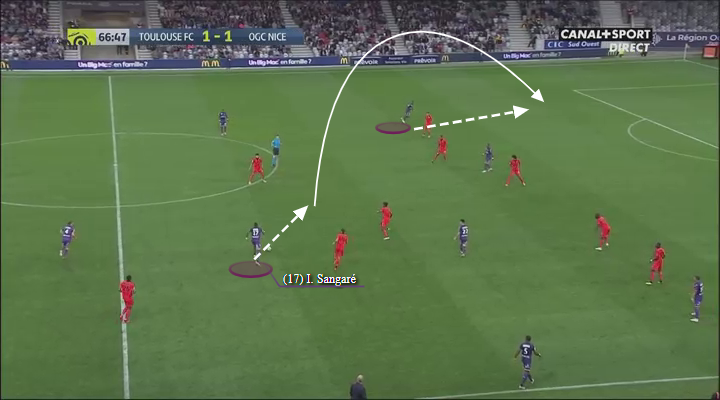 Once again in this example, we see Sangare utilise his excellent passing range in the match against Nice. When he takes possession of the ball, the opposition is actually in a strong defensive position with a five-man defensive line and three midfield players between ball and goal. We see Sangare take the ball and drive centrally essentially occupying all three central midfield players for Nice who are forced to move to engage Sangare to stop him driving past them.

This initial burst, however, is designed to create time for the attacking players to make their runs into space. As he drives forward the far side wide player starts to make a run to get in behind the defensive line, which is relatively high for the orientation of the ball, as the player in question makes the run forward Sangare is able to lift a perfect pass into his path despite that fact that he is already moving forward at speed.

With this passing range and ability, it makes it very difficult for opposition teams to understand how to play against Sangare. If you stand off of him, then he can find the passes to unlock deep defences. If they step out and engage, however, then Sangare has the dribbling ability to beat one or two defending players in quick succession.

To succeed as a top-level central midfielder in football today, though, you need to be able to do more than just play longer passes out to the wide areas when in possession, you need to be able to use the ball intelligently. This season has seen Sangare develop his game intelligence to such a point that he now carries a much greater threat when in possession of the ball with his ability to pick apart tight and compact defensive structures. 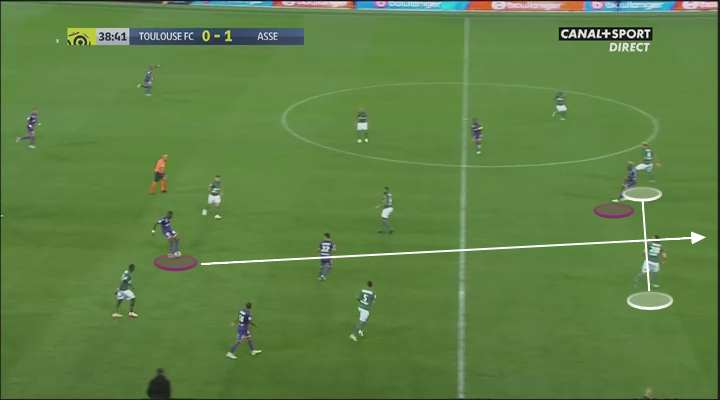 In this example, we see Sangare in possession of the ball in his own half with the opposition midfield in front and two forward players in position to press the ball quickly. There are shorter passing options for Sangare but he quickly identifies that the forward has a favourable position on his marker as he is on the near side shoulder.

A quick driven through pass gives the forward the chance to spin and run in behind the defensive line with the forward eventually entering the penalty area and having a shot at goal. 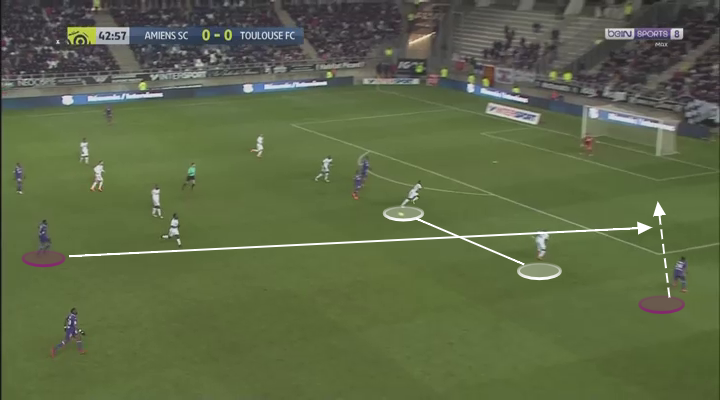 Once again in this graphic, we see Sangare in possession of the ball at the edge of the final third with eight opposition players in between the ball and the goal. The quality and decision making on the ball from Sangare is such that when the opposition midfielders standoff and allow him space to operate in we see the pass played at an angle between the full-back and the central defender for the Toulouse wide player to run on to in the penalty area.

As we touched upon previously, Sangare was an excellent defensive player in 1v1 situations when he first made his breakthrough at first-team level. Since then, however, he has become more and more effective in these situations when in the attacking phase. His size and speed make him a significant threat when carrying the ball towards the final third and he has the capacity to engage and beat opposition players with relative ease. We should not though concentrate only on his physicality as he also possesses the technical capacity to manipulate the ball in tight areas. 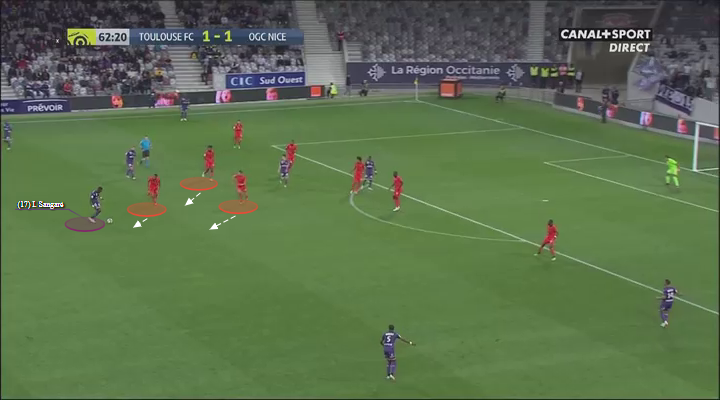 Here, we see Sangare pick up possession of the ball in the central area. He has options wide with both full-backs moving forward into higher areas to support the attacking phase. As soon as he takes possession, however, we see three opposition players move in to engage the ball and apply pressure to Sangare.

The Ivorian midfielder is not easily pressured and, indeed, his ability to stay on the ball under pressure makes him an important part of his sides attacking play. As the three players from the opposition shift across, Sangare uses their momentum against them and cuts the opposite way. With this simple movement, he takes the first two opponents out of the game completely and he is then able to engage and beat the third midfielder. 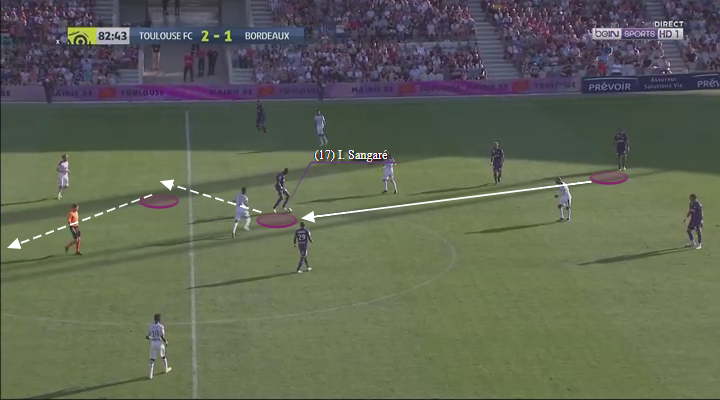 This time, Sangare takes possession of the ball in his own half facing his own goal and with an opposition player applying pressure from behind. The Ivorian midfielder is so strong, however, that he is able to roll away from the first challenge to then engage the covering midfielder in the Bordeaux half.

When the covering midfielder moves to engage Sangare, we see him use his pace and power to push the ball past the opponent and burst past him into the opposition half.

It is already a matter of when rather than if Sangare moves from Toulouse to bigger clubs. He has already been linked to the likes of Monaco and Lyon in France as well as RB Leipzig in Germany, all three of which are known to be amongst the best clubs in the world when it comes to talent identification. His skill set is also extremely well-suited to the English game and it would come as no surprise for me to learn that English sides have Sangare firmly on their radars when the transfer window next opens.