Speaking of Hammarby IF, many could recall that this is a club that is owned by AC Milan player – Zlatan Ibrahimović. Compared to league leader – Malmö FF or the Allsvenskan champion – Djurgårdens IF, clearly Stefan Billborn’s team did not have the best start of the season.

In the early stages of the season, Hammarby only ranked around ninth to 12th despite having some familiar names in the team, for example, former Liverpool U18 player – Alexander Kačaniklić. However, Billborn and his coaching staff smartly shifted the formation to a back three in recent games, obtaining remarkable results, including beating top teams on the table.

In this tactical analysis, we dissect how the 3-5-2 formation has helped Hammarby to climb to the seventh of the league. There are some intriguing tactics from Billborn that are worth paying attention to.

Hammarby played in a back four, mostly a 4-2-3-1 for most games, proportioned at 57% after 17 Allsvenskan games. By contrast, they played with a back three for only 15% of the game time, but the opponents were Djurgårdens, IFK Norrköping and IF Elfsborg.

Probably missing Muamer Tanković, who was trying to land on Serie A and Kačaniklić was also a factor that led to the change. The improvements were clear, seven points from these games and only lost to IK Sirius.

The only metric that dropped was the average possession of the team, from 53.69% to 50.46%. It was understandable as the opponents were tougher in these games. The positive changes of the indexes are suggesting that the offensive quality of Hammarby has improved under the new system.

This image is the preferred lineup of Billborn with a back three. Some players are regular starters, including the centre-backs, midfielders and the right wing-back – Vladimir Rodić.

The left wing-back could be either Tim Söderström or Dennis Widgren, and the signing of Mohanad Jeahze would provide the team with an additional option at that position. Gustav Ludwigson started most games as one of the strikers, but his partner changed because of injury or tactical reasons. Paulinho, Adbulah Khalili, and Aron Jóhannsson all had the chances to play.

Using a back three has helped Hammarby to increase the numbers in the development phases when attacking. More players were available at the midfield or in the central third, hence, the ball circulation was stronger. This is supported by stats, as Bajen’s average passing length was 18.97m with this new system, while that was 20.16m before – more short passes were used. And, as a result, the average shot distance also improved, from 18.34m to 16.76m. It is suggesting the quality that Hammarby entering the final third is better, hence, they could shoot closer from the goal.

The attack would develop from the wide centre-backs, mostly of the left. The wing-backs were attacking asymmetrically, as Rodić (#11) would be staying closer to the attacking third. On the contrary, the left wing-back was relatively deeper to help the build-up.

By ball circulations, I refer to the ability to move the ball across vertical halves by passing, relating to the availability of the central options for the wide players. As suggested by the passing map of the games against Elfsborg and Djurgårdens, the passing links between the left wing-back and the midfielders (A. Khalili and Darijan Bojanić) were strong. Also, the centre-backs exchanged many passes.

There are some common attacking patterns in the team. Most of the attacks developed from the left flank given the closer proximity of players. The wide centre-back – Mads Fenger would connect the left wing-back by a simple pass. Variations were needed depending on the opponents. For example, it would be even better if Fenger could carry the ball forward, being able to affect the positionings of the second defensive line. In those cases, A. Khalili was often pushing high or roaming his position, leaving open spaces for Fenger to dribble into.

After connecting the left wing-back, he could immediately release a forward runner if possible. It would be A. Khalili, who made double-movements and served as the unmarked third man. Or, the ball-near striker would attack the spaces ahead of the left wing-back, like Ludwigson supporting Widgren below. 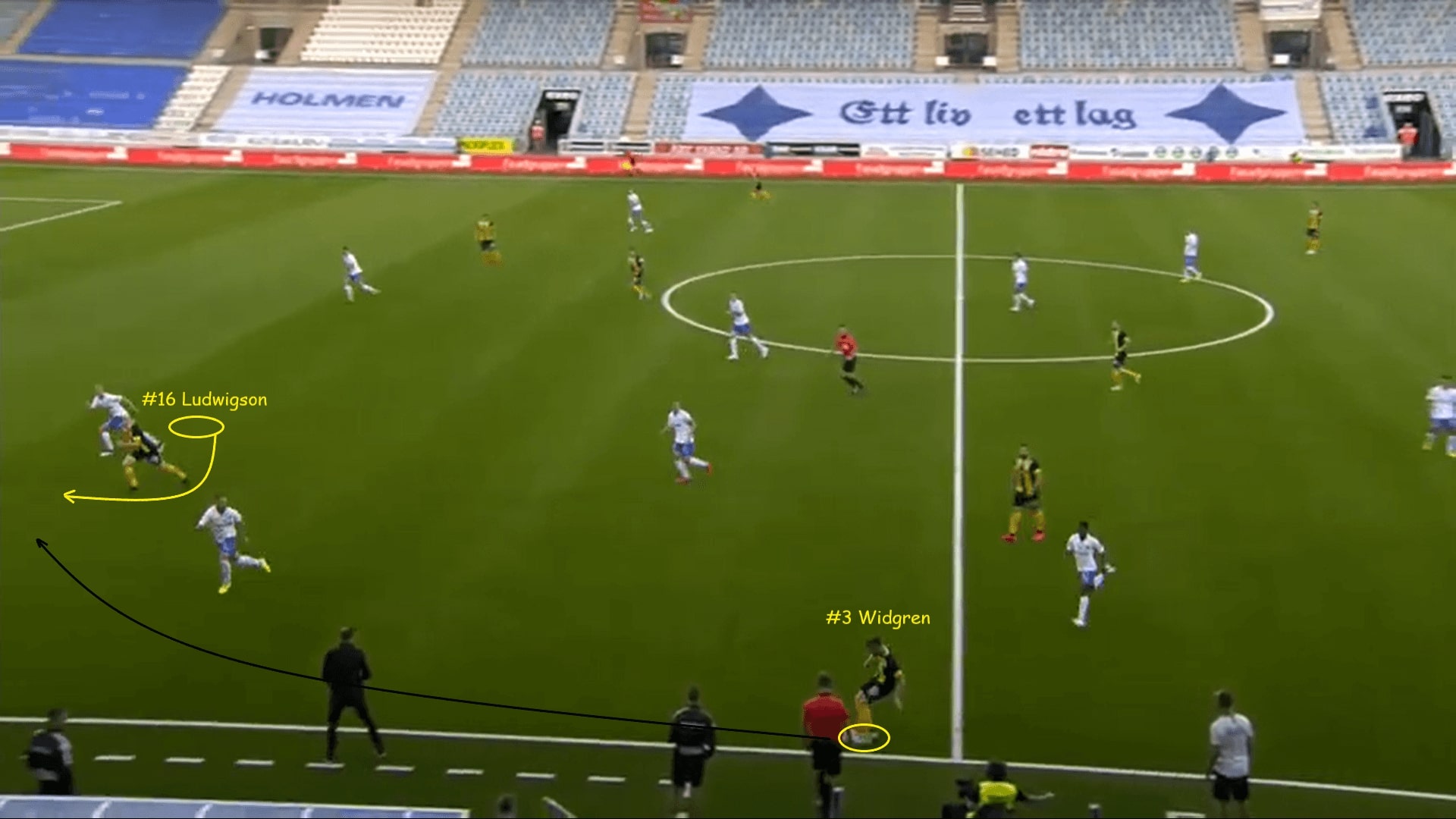 However, there were some details that Billborn’s men should pay attention to. Since the left wing-back always dropped to provide a passing option for Fenger, his body was closed, and the ball was going to his right foot. Sometimes even the pressure was not arriving at the back, but the same situation occurred, like the below example.

This closed body and limited visual information perceived were adversely affecting the next move. Apart from losing the ball from the potential blindside pressure, the left wing-back tended to play to the central option, even though it was risky and suboptimal. Usually, this supporting player was travelling laterally, with a marker at his back. The defending team could regain the ball near the Bajen penalty box. 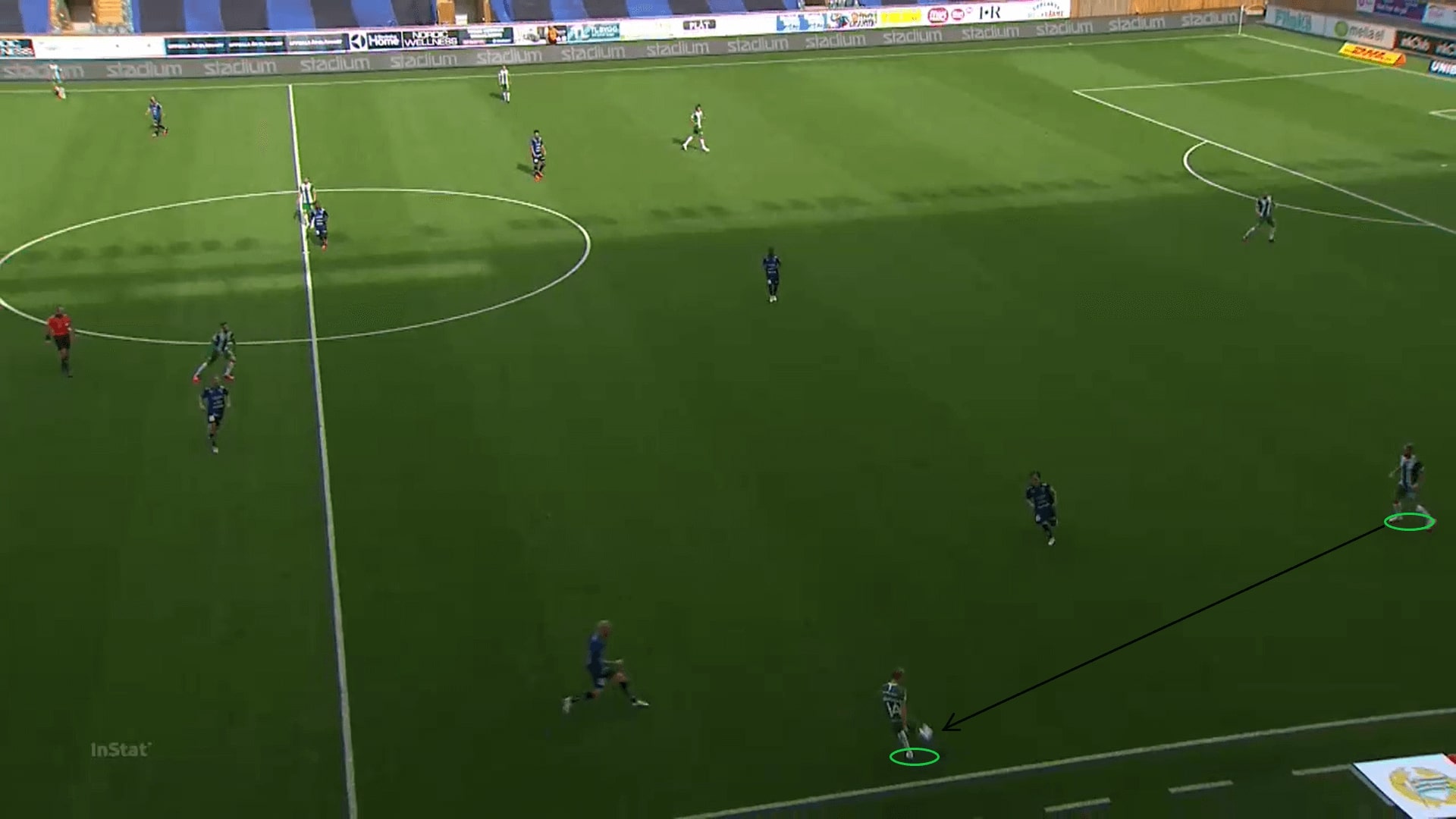 Comparatively, Hammarby were more direct on the right flank, if not using the below pattern to construct. Joachim Björklund likes to bring the ball forward as well. But the passing options would be limited since Rodić moved high very early. Sometimes the carrier has to pass long and direct to try releasing the runner behind the line.

In some better cases, they attacked with a pattern that aimed to release Rodić in the offensive third. The ball-near striker would move diagonally towards the ball, while Rodić knows he should run forward. Then, Hammarby could attack with the diagonal passing lane, using the right wing-back as the third man. Ideally, all these moves were done within first-touch, the opponent would not be able to anticipate, let alone react. 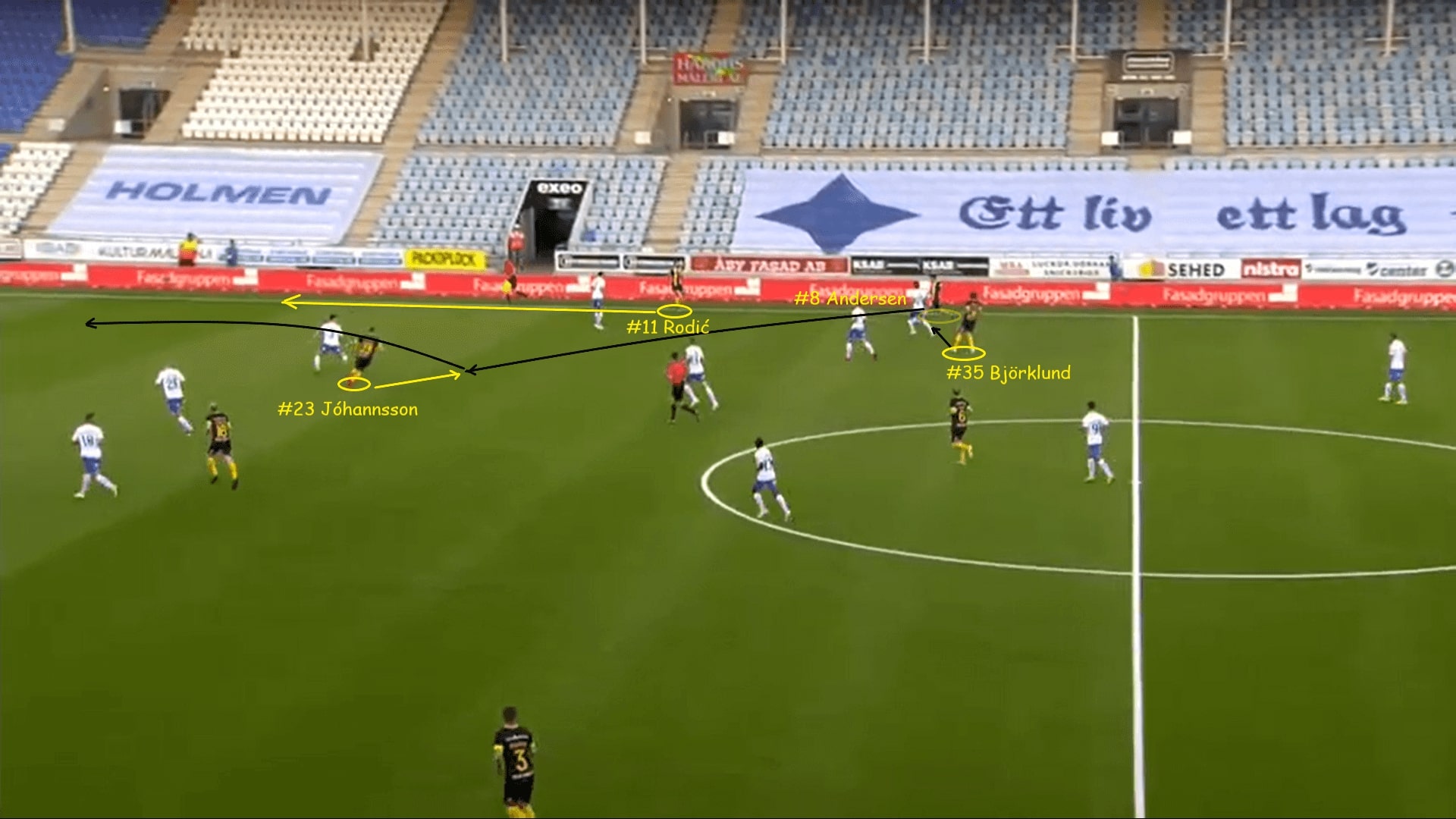 Rodić is a really good player in the offensive third. He is quick, also strong in 1 v 1 situations. Leaving him alone in zone 18, you could expect a cross is coming from the 26-year-old Montenegro player.

Therefore, Rodić is important to Hammarby’s attack. The below radar graph of the player has clearly outlined the key aspects – strong at dribbles per 90 and crosses per 90, which are 4.64 and 5.02, respectively.

Given the complexity and unpredictability of the game, the above patterns might not appear automatically. Therefore, it was of the essence to make those momentums to happen. The midfield trio of Hammarby rotated a lot to create spaces and passing options around the ball.

A very basic setup would be – Bojanić moving forward, Jeppe Andersen coming laterally or diagonally to the central zone, A. Khalili dropping if needed. The below scenario was the result after rotations.

When Bojanić was going forward, his marker was likely to follow given most teams in Sweden defended in a man-oriented approach. Spaces in this region were free for another player to use, which was Andersen in this case. Since the passing lane to Söderström was very narrow, Fenger played the ball to Andersen. This was a part of the ball circulation, and potentially developing into an attack from the above patterns.

During the process of rotations, the defending players might be disguised. The decoy movements were very useful to open passing lanes, reaching a free player. In his example, Nahom Girmai Netabay followed Andersen, who made an outward movement to the wide zone. Spaces were opened at the centre for Bojanić to drop into, who now was a free player. It was too late for Girmai Netabay to react, even though the marker recognized the real intention of the passer. 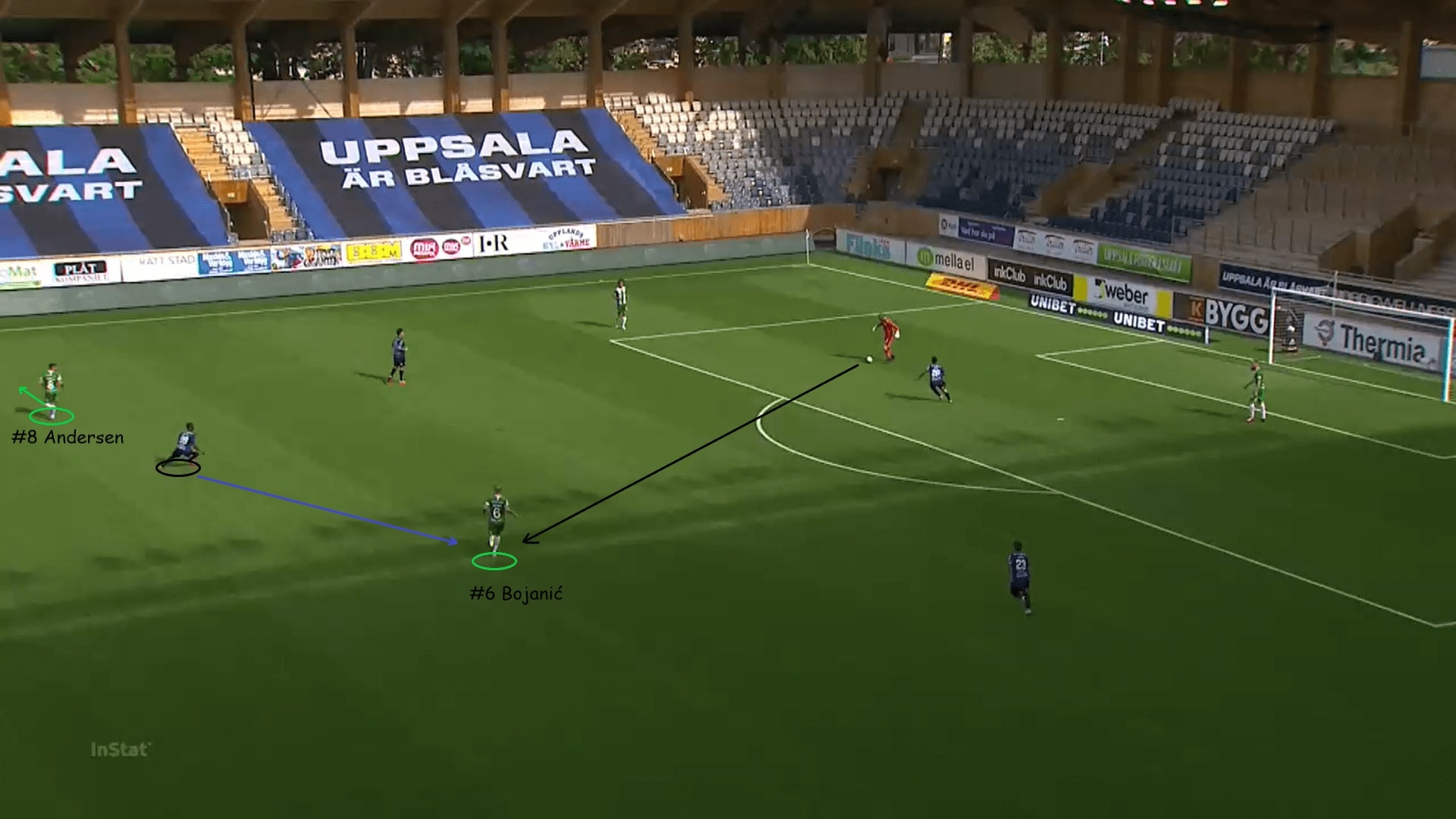 If the defending team does not close the central receiver initially, this player could turn and face the opposition goal, picking a runner as he wished. Comparatively, A. Khalili was the best choice to play the penetrating passes.

Facing a back four, Hammarby had a slight advantage since they have two strikers to manipulate the centre-backs. The outward-curve move was very common, like how Jóhannsson did below, it created individual separations against the centre-backs. Consequently, Ludwigson was in a 1 v 1 in the central position, but A. Khalili did not pick him out. 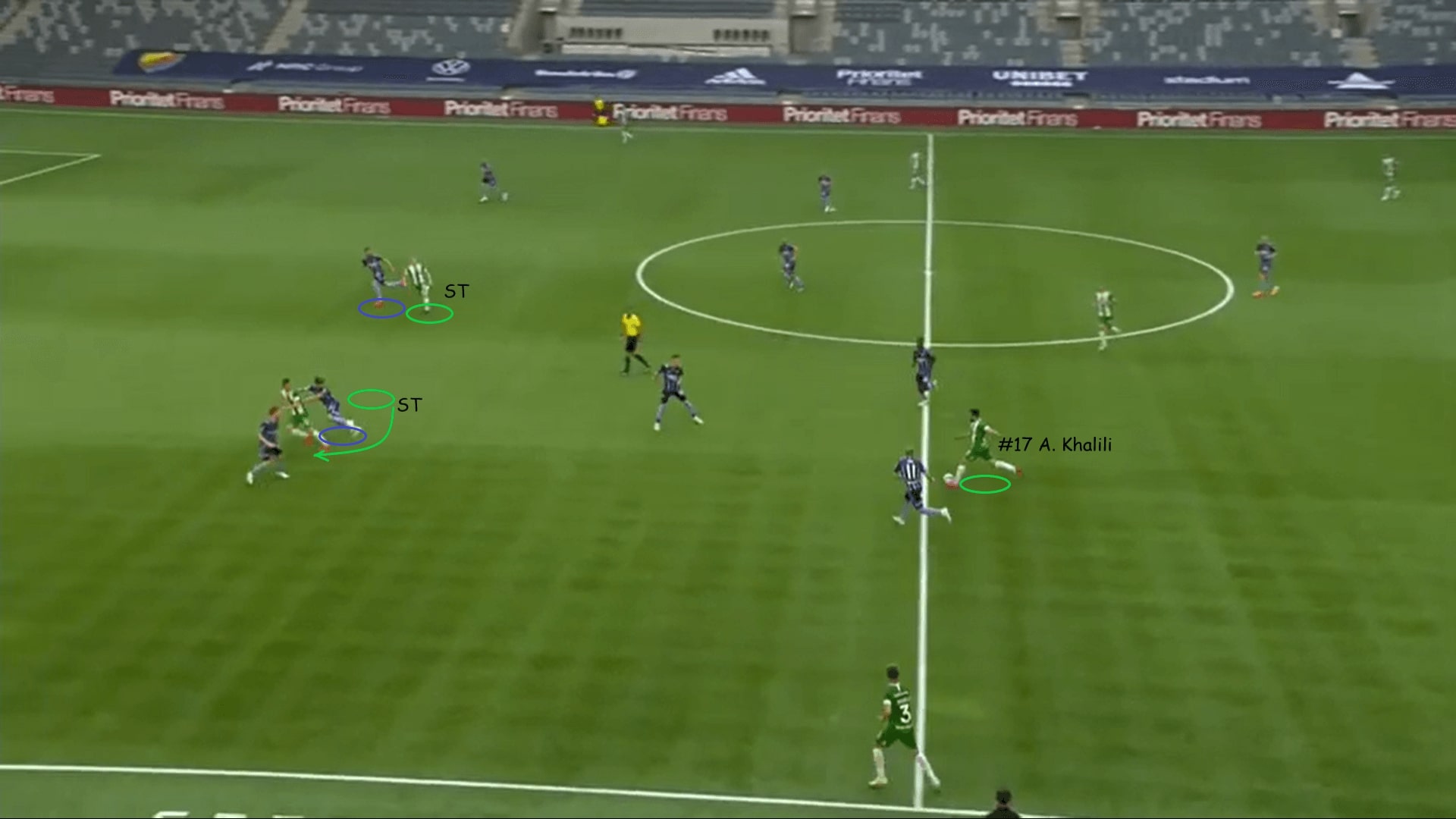 Another detail of the Hammarby that I liked a lot was their use of acceleration runs. The players must communicate with each other, such as verbally shouting or pointing where the ball goes to. The aim was to help the midfielders to receive the ball when moving, not in a static condition.

This was important as a variation of the attack. If the midfielder received the pass statically, the marker could press from the blindside and the attack was difficult to develop. If the midfielders were moving to the destination to the pass, the dynamism was strong – many follow-up actions could be done, such as no-touch turn, which could shake the marker off. This was a very useful habit that all Hammarby midfielders were used to.

Also, such a constant move also offers blindside dropping movements, the marker was difficult to defend until the last moment. A. Khalili loves to do this. 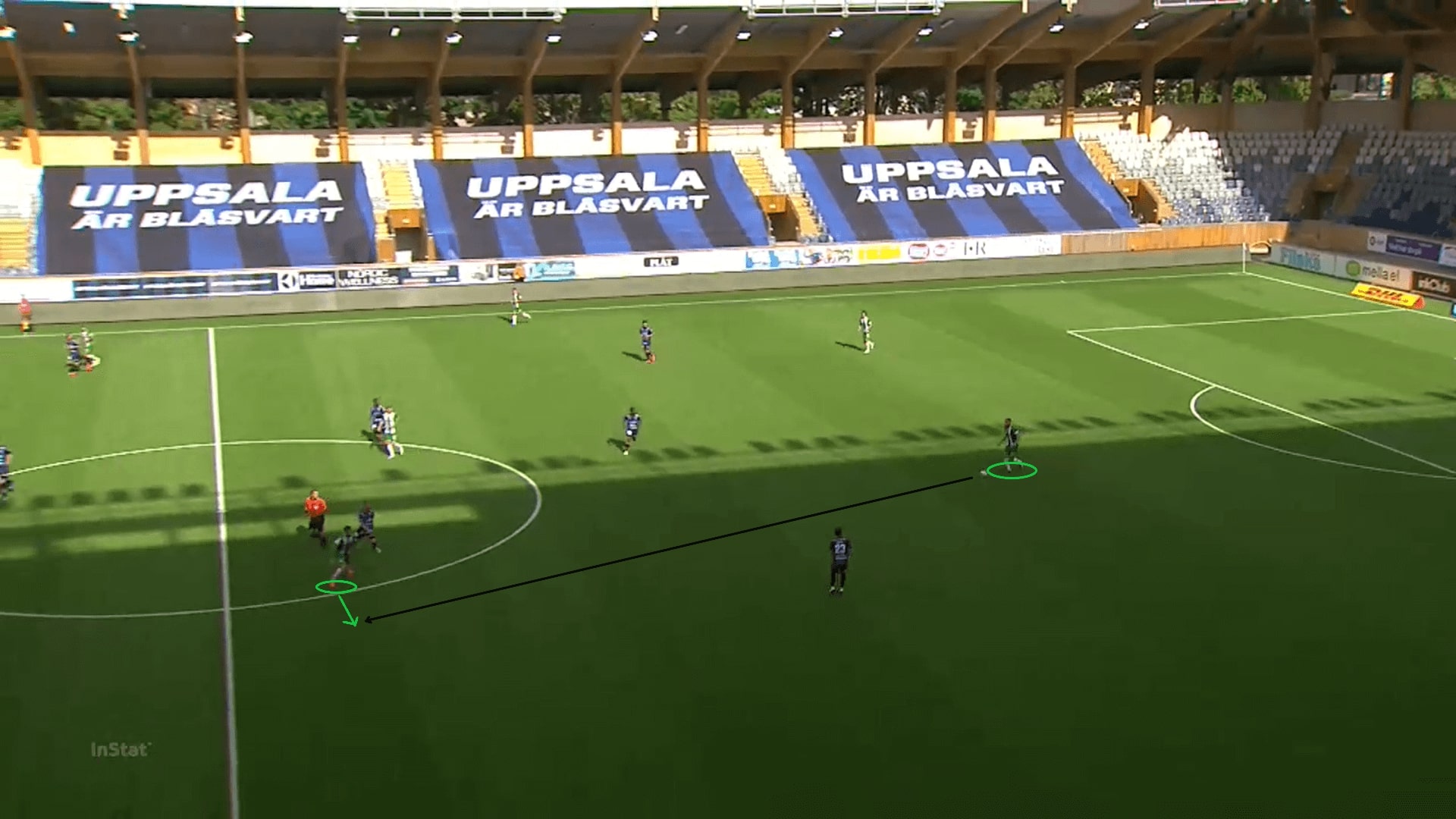 Crossing and attacking the penalty box

Since the attacks of Hammarby developed at flanks as explained in this scout report, crossing plays a huge part of their game. First of all, I want to talk about the individual movements of strikers more. The likes of Ludwigson always makes outward-curve runs to attack spaces behind defence, the route was on the blindside of the defender. It was a difficult move to defend. 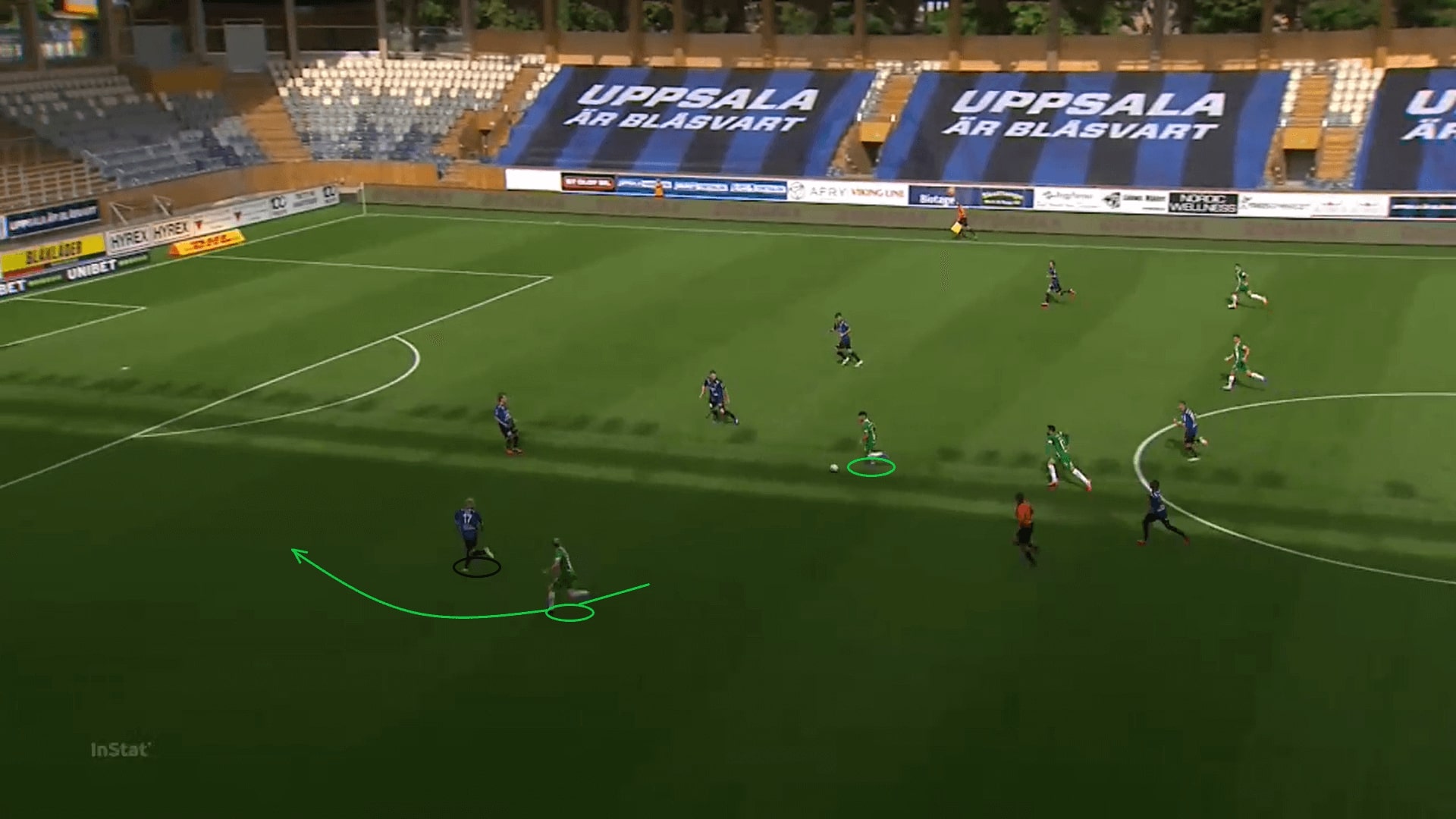 When attacking the penalty box, usually, at least two to three players were available, sometimes four. These included the strikers, a midfielder (often A. Khalili) and the right wing-back if the ball was coming from the left. The behaviour of Rodić to attack the box could be a secret weapon of the team. Since the right wing-back was arriving from the far side, the last defender would not be able to see his run – it allows countless ways to attack the goal.

If the delivery came from the right, it was simple, probably only the strikers were the targets. It was because Rodić was strong in seizing the moment in the 1 v 1, with his pace, there was not much time for the rest to follow-up.

The strikers were likely to attack depth, such as Ludwigson would go near to the six-yard box. The rest depends on the time available, sometimes A. Khalili is lurking nearby the penalty spot. 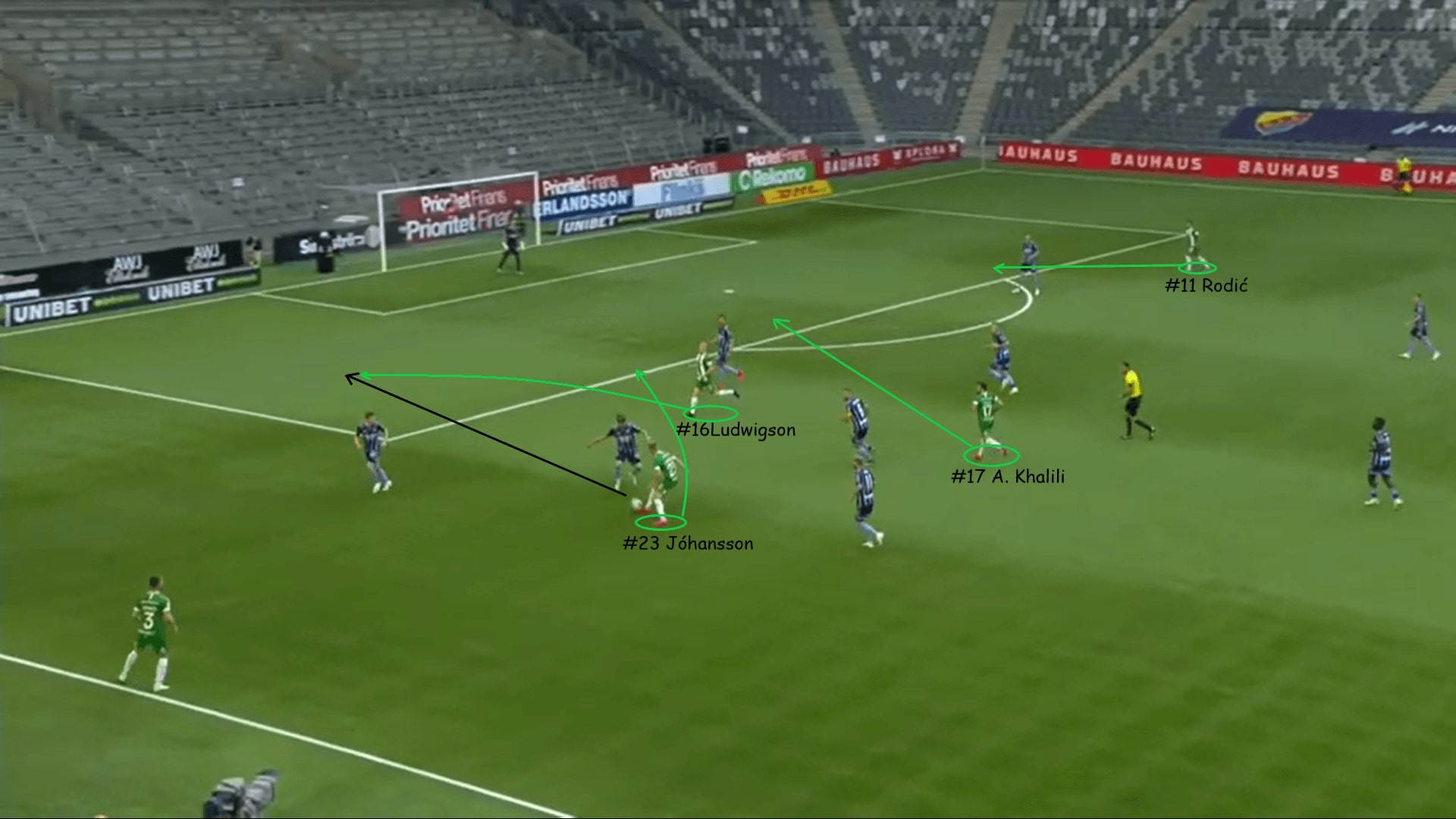 However, Billborn’s side would need to control the transitions better if they were attacking the box with the aforementioned way. A potential issue was the rate of the remaining midfielders to follow-up, sometimes Andersen and Bojanić were yet to push higher to pick the second balls, where spaces between these lines would allow the opposition to counter.

For example, the area outside of the penalty was controlled by two Elfsborg players, and the region was simply too big for only Andersen or Bojanić to cover. The deepest midfielder in the image was isolated, a simple one-two or wall pass could nullify the lone counter-pressing action. 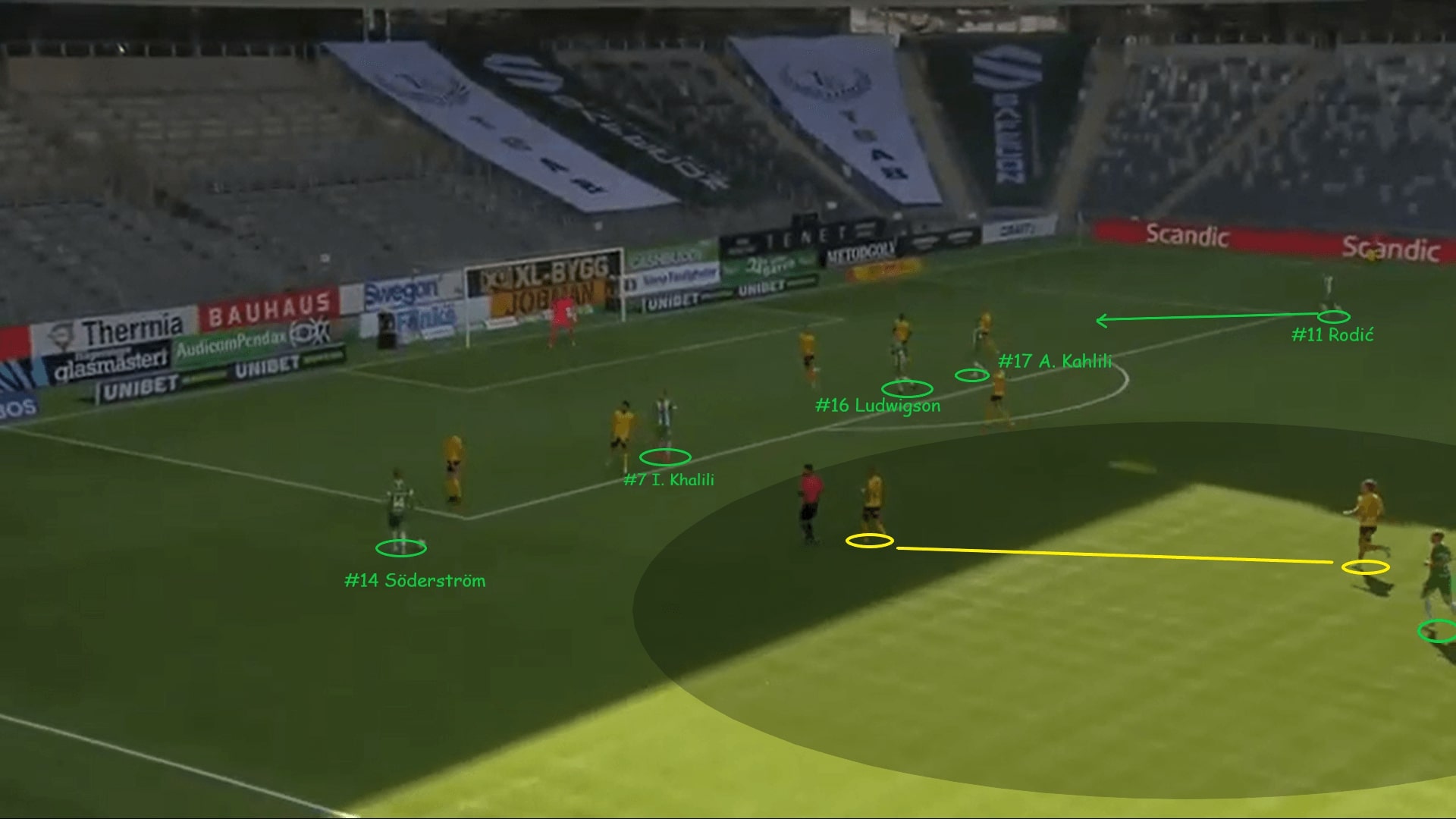 Despite all the compliments on the attacking system of Hammarby in the above analysis, the tactics were not perfect. In fact, the workability also depends on the opponents, the intensity of pressure confronted. For example, Billborn’s side was more direct against Sirius, an aggressive pressing team.

With Tanković rejoining the team, I am not sure whether Billborn would continue to use this system regularly. Given all the above arguments on the pros and cons, there should be sufficient reasons to support the 47-year-old head coach to do so.