After 16 Allsvenskan matches, Helsingborgs IF were at the bottom of the league table with only 13 points. Under the former Aston Villa player – Olof Mellberg, the team conceded 27 goals already, more than any other teams in the Swedish top-tier.

In this tactical analysis, we are dissecting the defensive approach of Helsingborgs this season, what has caused their vulnerability to protect their own goal? How to exploit the defence of this team? You will find the answers in this scout report.

Under Mellberg, Helsingborgs played in a 4-4-2 formation. The press was largely man-oriented in this shape with a medium-low engagement line. The average PPDA of the team was 12.89, ranked 12th in Allsvenskan and suggested the defensive approach was comparatively passive.

Mellberg wanted his team to protect the central areas initially and deny the build-up from developing there. The strikers tended to stay at the centre or around the opposition pivot, overloading the area and invited the opponent to attack flanks. In this image, the strikers were on the pivot, allowing the opposition defenders to play without pressure. 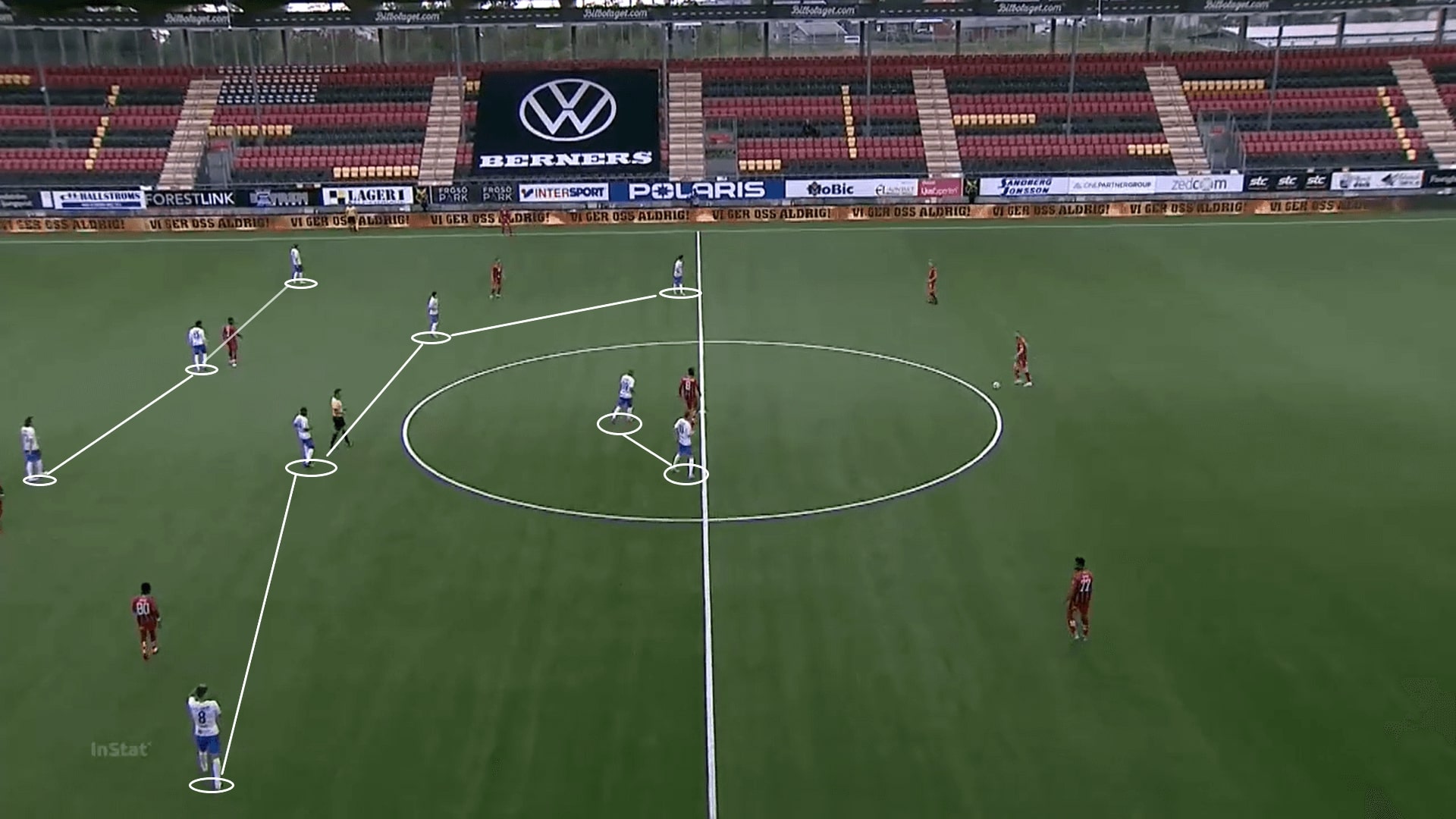 The pressing trigger was usually a behaviour that put the ball to either vertical half of the pitch. This could be a wide pass or the ball-carrier himself dribbling into that region, and the pressing began from here – the striker would chase the ball while the remaining teammates man-marked options nearby the ball.

In this example, the carrier dribbled forward and triggered Rasmus Jönsson to press. Meanwhile, Mohammed Abubakari (CM) and Armin Gigović (RW) marked the opponent corresponding to their positions. This approach would speed up the play as the pressure was coming behind the ball, while the carrier lacked options to circulate the ball, hence, the attacking team lost the tempo and it was difficult to control the rhythm. When everything increased the speed, it was more difficult to play a good pass or make a good decision.

However, there was also an unsolvable issue in a pure man-oriented pressing scheme. The attacking team could easily manipulate the defenders by behaviours such as off-the-ball movements and positionings. Helsingborgs tended to react instead of anticipating and trying to double-up the carrier. When the opposition midfielder and left-back did not move towards the centre, Abubakari and Gigović were kept away from the ball. Spaces were opened for the carrier to dribble into and this attack ended up in their defensive third. 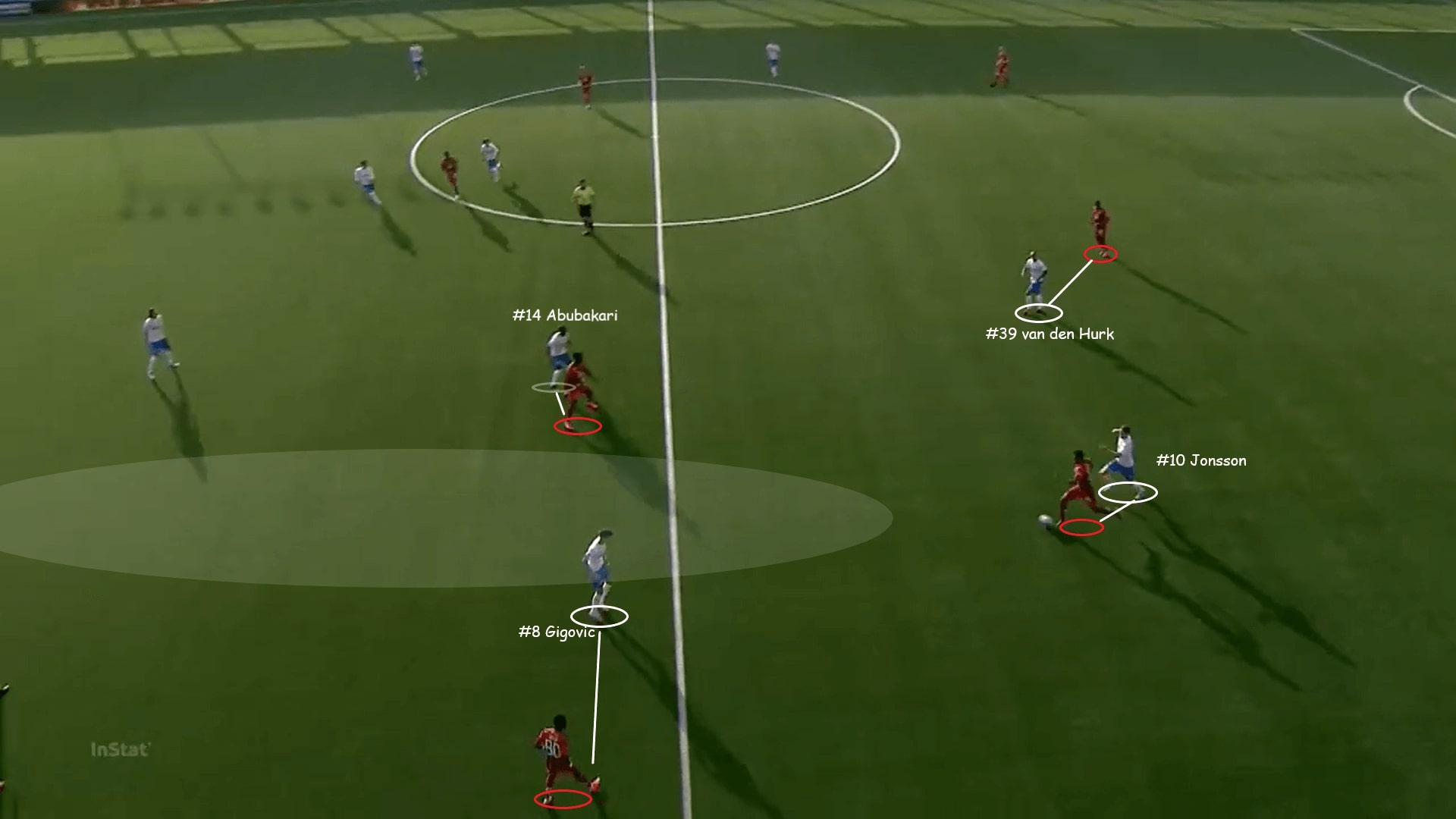 A variation was shown here, if Helsingborgs set their first line high, the centre-backs of the attacking team could spread wide to separate the strikers. To cope with this situation, either midfielder of the team would push higher to join the press.

In this example, Brandur Hendriksson Olsen moved higher to press the opposition between his strikers. 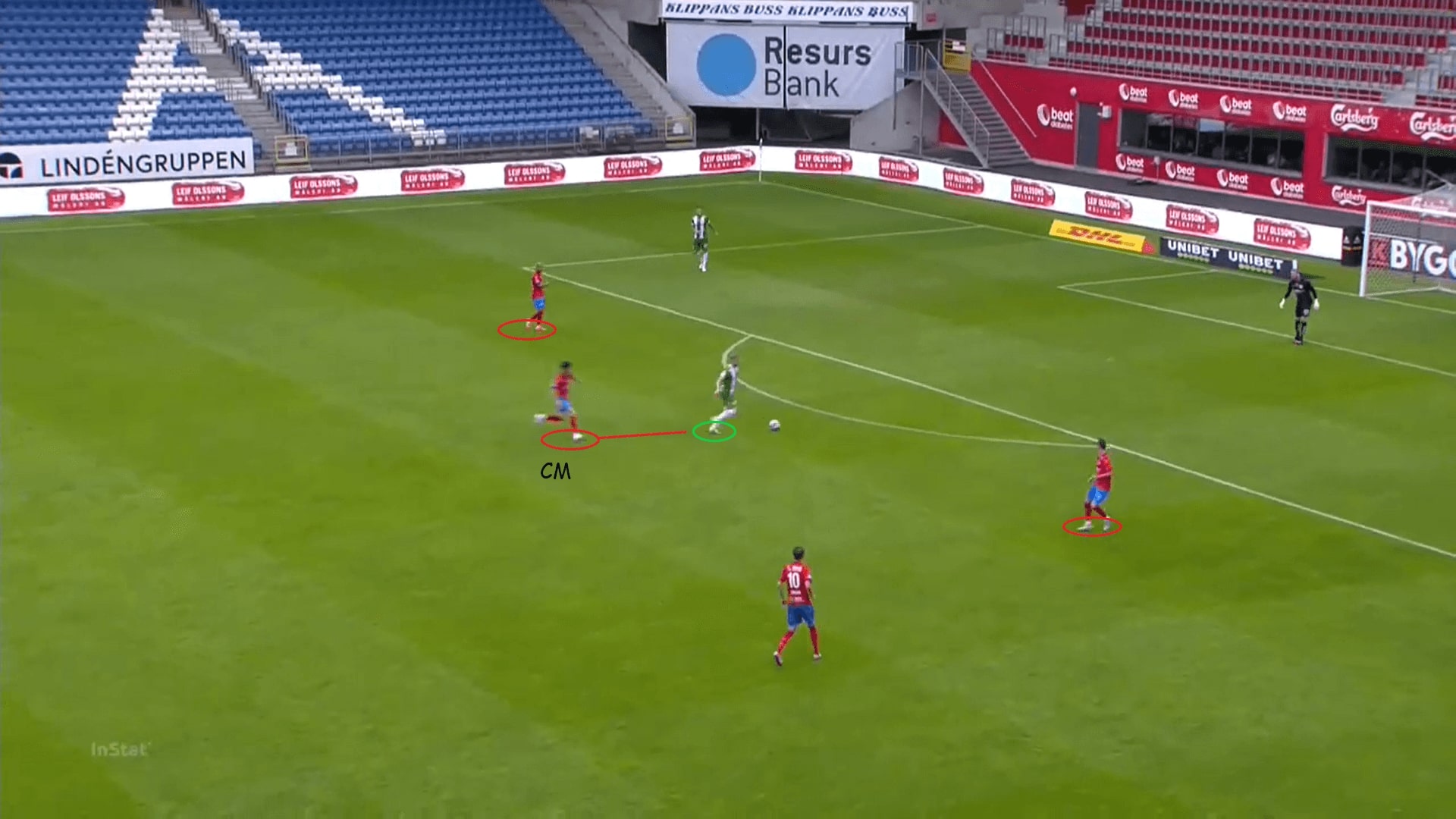 Since the pressing scheme and orders to players were pretty straightforward, it was not difficult to break the block. The spatial awareness of the midfield duo was not strong when a midfielder stepped up, his partner tended not to provide the defensive cover. Consequently, spaces appeared within the block, all the attacking team needed was to exploit those areas.

In this example, Hendriksson Olsen pushed higher to support the first line, but Abubakari stayed deep. The midfield was full of free areas as highlighted, when the attacking team played the ball into the region, it was difficult for Abubakari to cover the entire region, simple combinations could bypass the pressure. 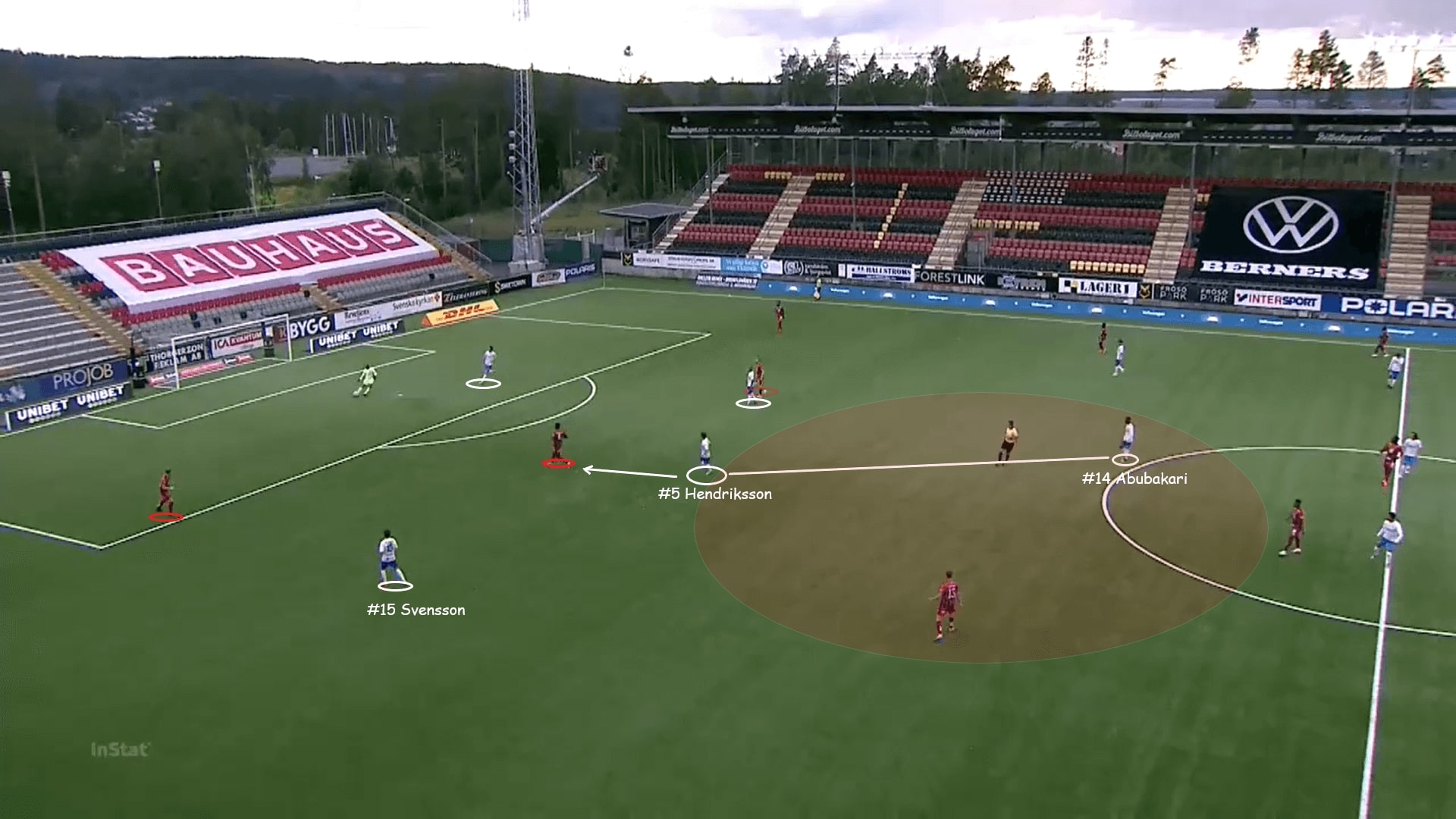 When defending against a back three, Helsingborgs faced some issue regarding the duties of the players. In order to reach numerical equality, a player must support the strikers. If the ball was moved to the wide areas early, the wingers would be attracted to the ball early and push to the first line – Max Svensson in this example.

As a result, the shape turned to a temporary 4-3-3, the left-winger was isolated and unable to cover spaces behind him. The attacking team might further pin and manipulate the positions of Helsingborgs’ full-backs by placing a winger high, so the highlighted region was opened initially. 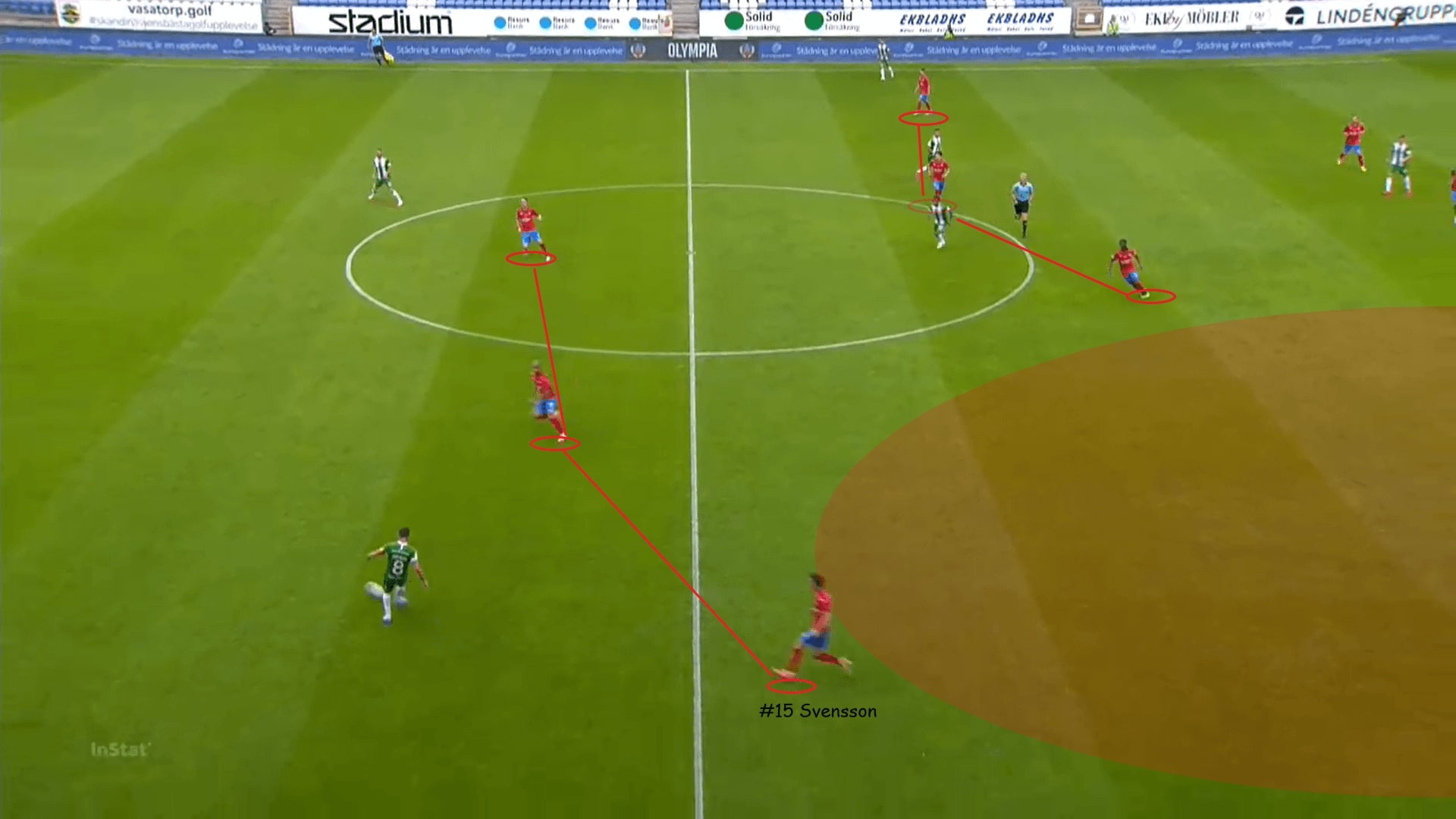 For another instance, if the attacking team intended to open the half-spaces in the build-up, they could use the full-back or wing-back to occupy the Helsingborgs wingers. Svensson was pinned below and Abubakari was slow to cover the opened spaces.

Without instant pressure on the ball or on the corresponding target, the opponents might feel easy to play the out-balls to break the lines. It was attributed to the pressing trigger as explained, although the carrier was nearby the striker, the press would not begin until it entered the region as suggested (bypassing the first line). 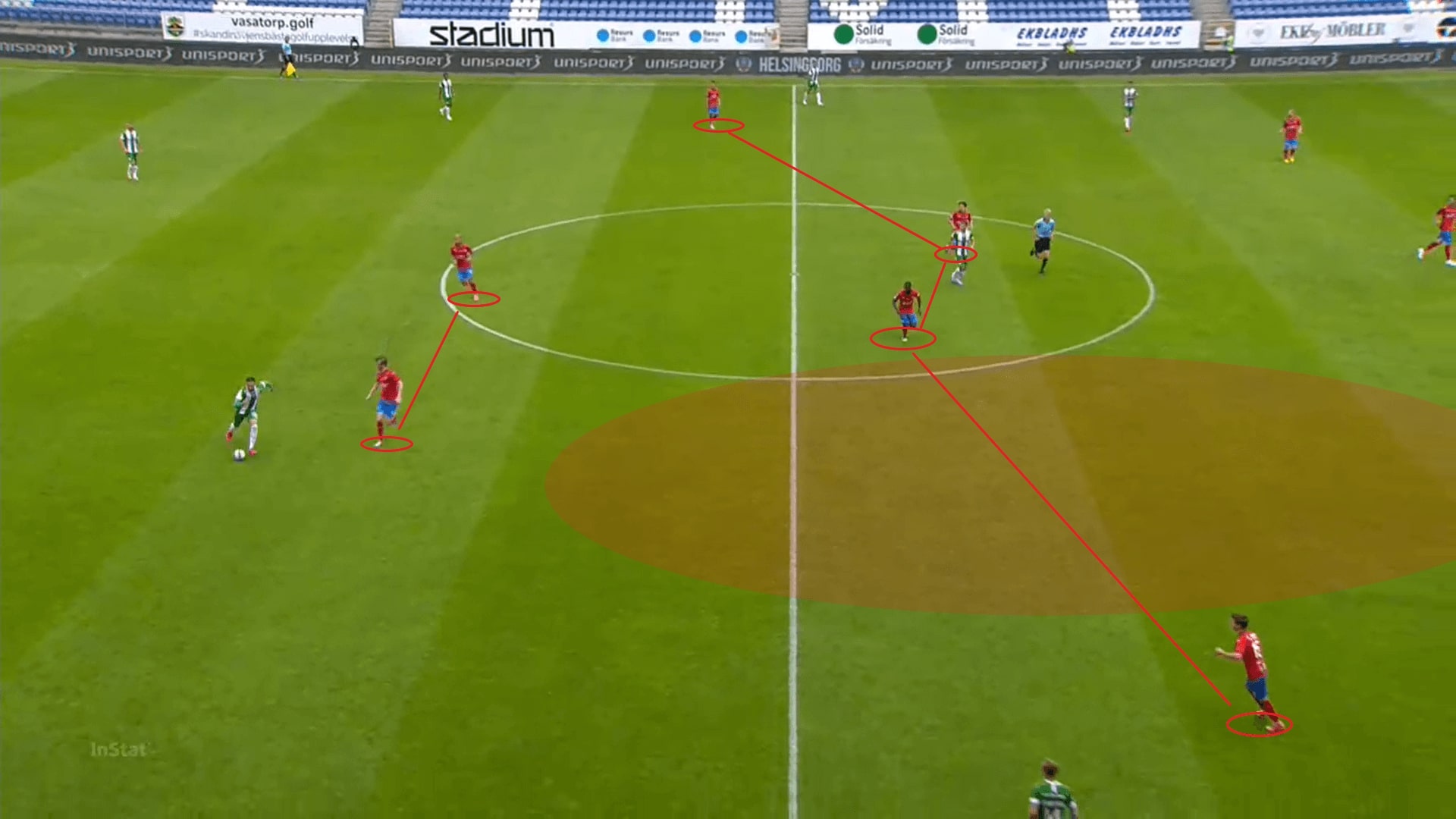 Another issue of the 4-4-2 formation was the vulnerability against a midfield trio (4-3-3, 4-diamond-2, 3-4-1-2 etc.). Helsingborgs would suffer a 2 v 3 numerical deficit against these teams because of several reasons in the setup.

The first was the use of the gambling player  – Svensson. The left-winger of Helsingborgs was often out of the shape slightly, leaving himself with spaces, so he could initiate a counter-attack by dribbling forward during the transitions. Another reason was because of the man-oriented scheme, players were pulled away by the opponents’ movements. When the attacking team intended to create an overload on the Helsingborgs midfielders, they could open spaces at the centre by keeping the Di Röe full-backs or wingers wide. For example, the attacking team bypassed the midfielders by finding the player behind them.

Also, neither Martin Olsson nor Mix Diskerud has the aggressiveness and defensive awareness to cover the midfielders. In this situation, Olsson might need to push higher to control the free player, but this was not the habit of the former Blackburn Rovers centre-back. 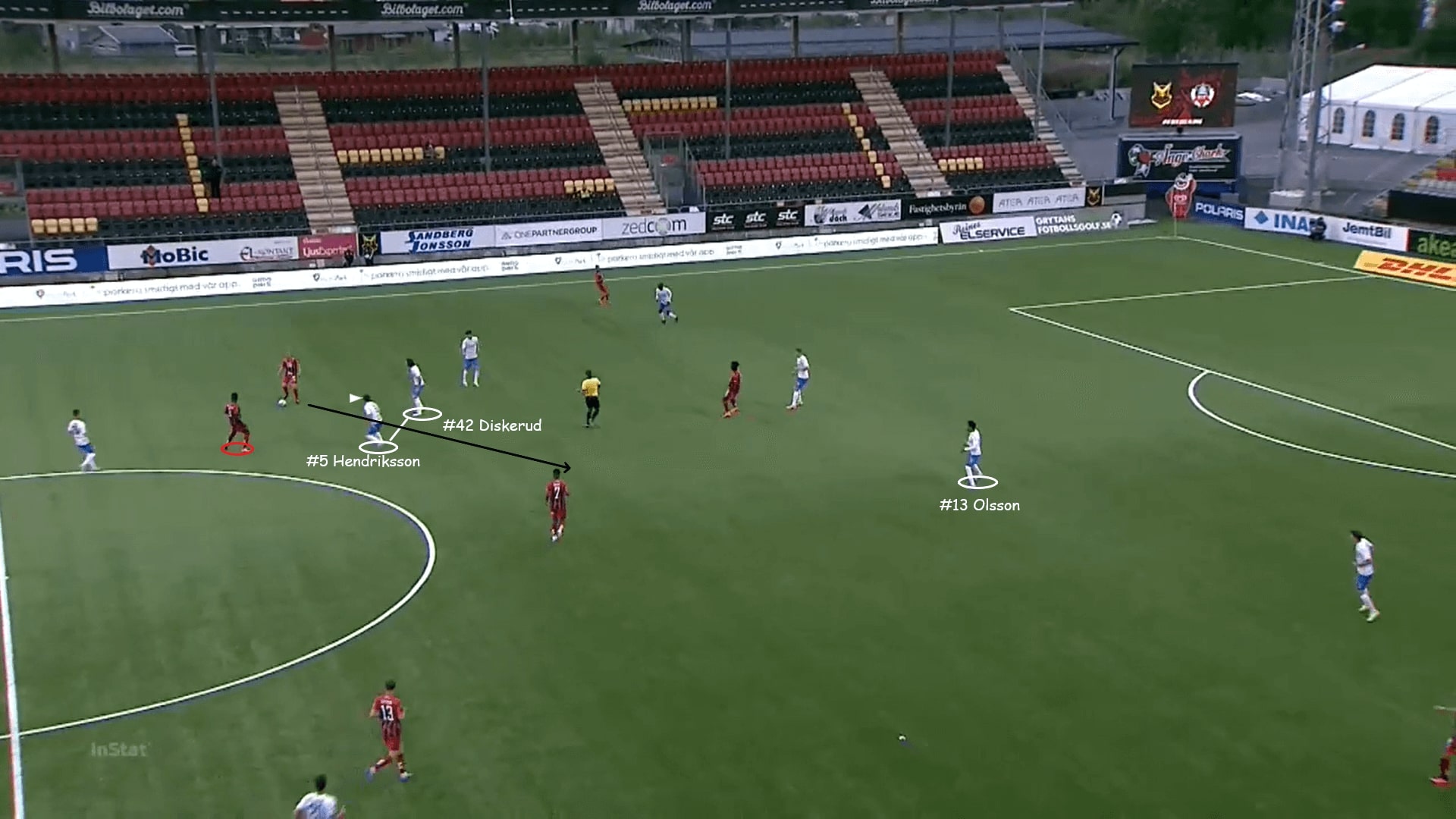 Sometimes the attacking midfield trio does not have to exist prematurely, some flexible attacking team could create this numerical superiority temporarily by rotations or carrying the ball forward.

This was how Malmö attacked Helsingborgs at the Stadion. An example was provided below – Jo Inge Berget carried the ball forward trigger a midfielder out of position, while Ola Toivonen suddenly appeared at the blindside of Gigović to provide a passing option. 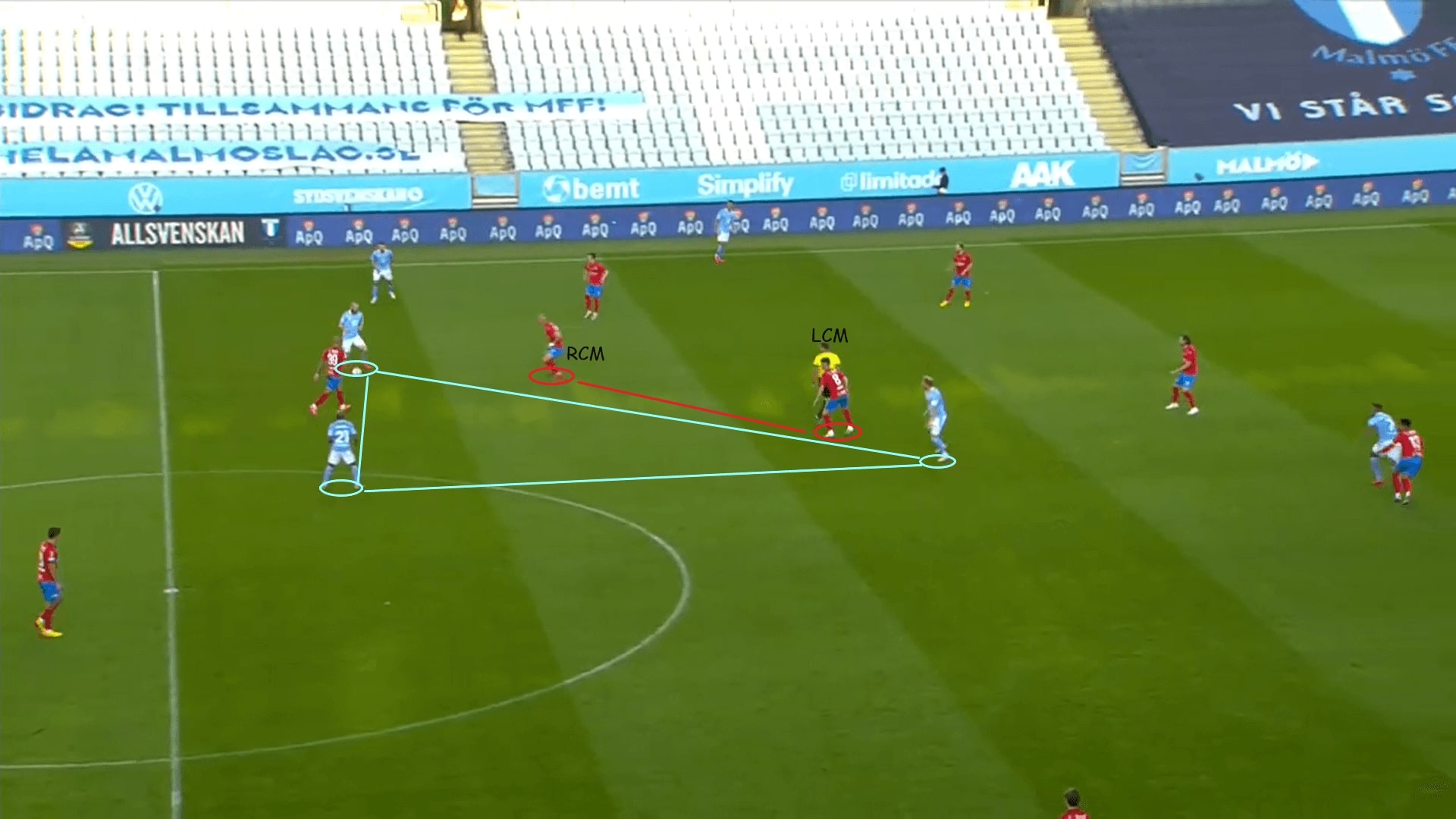 The last method we are showing to exploit the man-oriented system of Helsingborgs combined the strategies above – spatial awareness of the midfielders, exploiting the wide players, manipulation of positionings and movements.

Here, Svensson was easily bypassed because the pressure would not be applied that high. The wide player received the ball and the full-back was often late to the target (they are aware of spaces behind). An off-the-ball diagonal movement has easily drawn Hendriksson Olsen away, the midfielders stretched as Abubakari did not move simultaneously, while Olsson was focusing on the wide movement as well. It was too easy to access the dangerous player in zone 14. 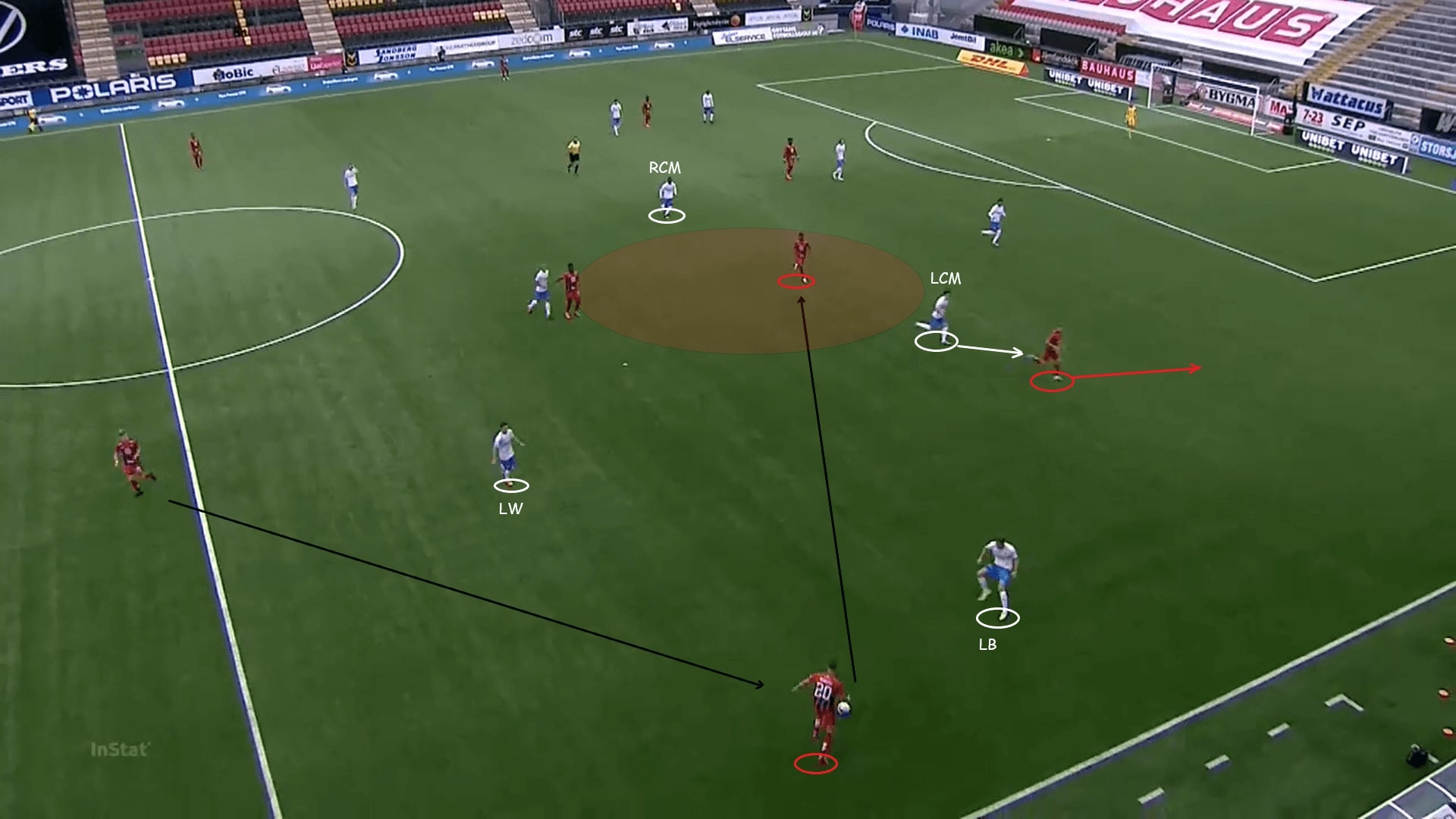 Considering pressing high was not the strength the team, as dissected in the above analysis – there are countless ways to exploit a man-oriented system. Therefore, there were also numerous occasions that Helsingborgs were defending with a low defensive block, setting the last line nearby the penalty box.

However, the defence was not solid in general, some old habits appeared in the pressing also appeared in the low block. Again, there were attacking teams trying to manipulate the Helsingborgs players by movements and positionings, sometimes the defensive shape became a 6-2-2 as the wingers also joined the last line. This practice has undoubtedly hindered the counter-attacks of the team. Even regaining the ball, it took a long distance to attack the opposition goal, and the team lacked a very strong dribbler to do the job.

From a collective standpoint, only the original back four in the defensive line would move as a unit. The wingers tended to ball-watching and seldom adjust their positions accordingly. As highlighted, the half-spaces were relatively large and the attacking team could potentially exploit by runners into the region. 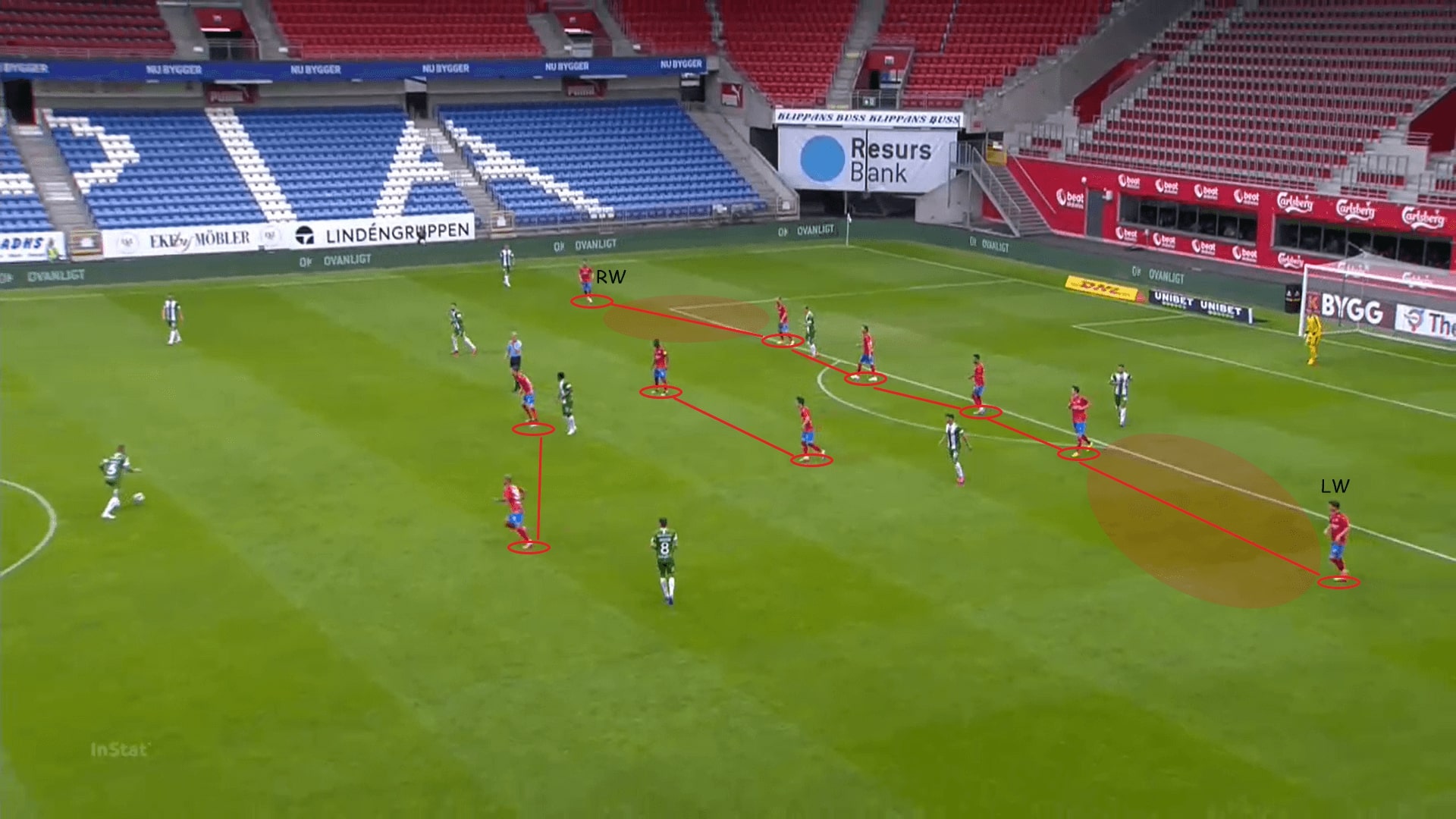 The man-oriented scheme has also led the team defending passively. Simple movements could tear the midfield line apart and find a passing option. Without the aggressive and reliable defensive behaviours of the defenders, the attacking team could find themselves creating the opportunities close to the goal.

In this example, a passing lane was easily opened because of a decoy run. The Helsingborgs players merely reacted, while the right-back did not step up to follow the dropping player (though it was understandable, or else Diskerud was isolated).

The confusion came from Abubakari and Olsson’s communication. If the left centre-back has moved a step forward and the passing lane was narrowed, was it necessary to move a midfielder towards that target? 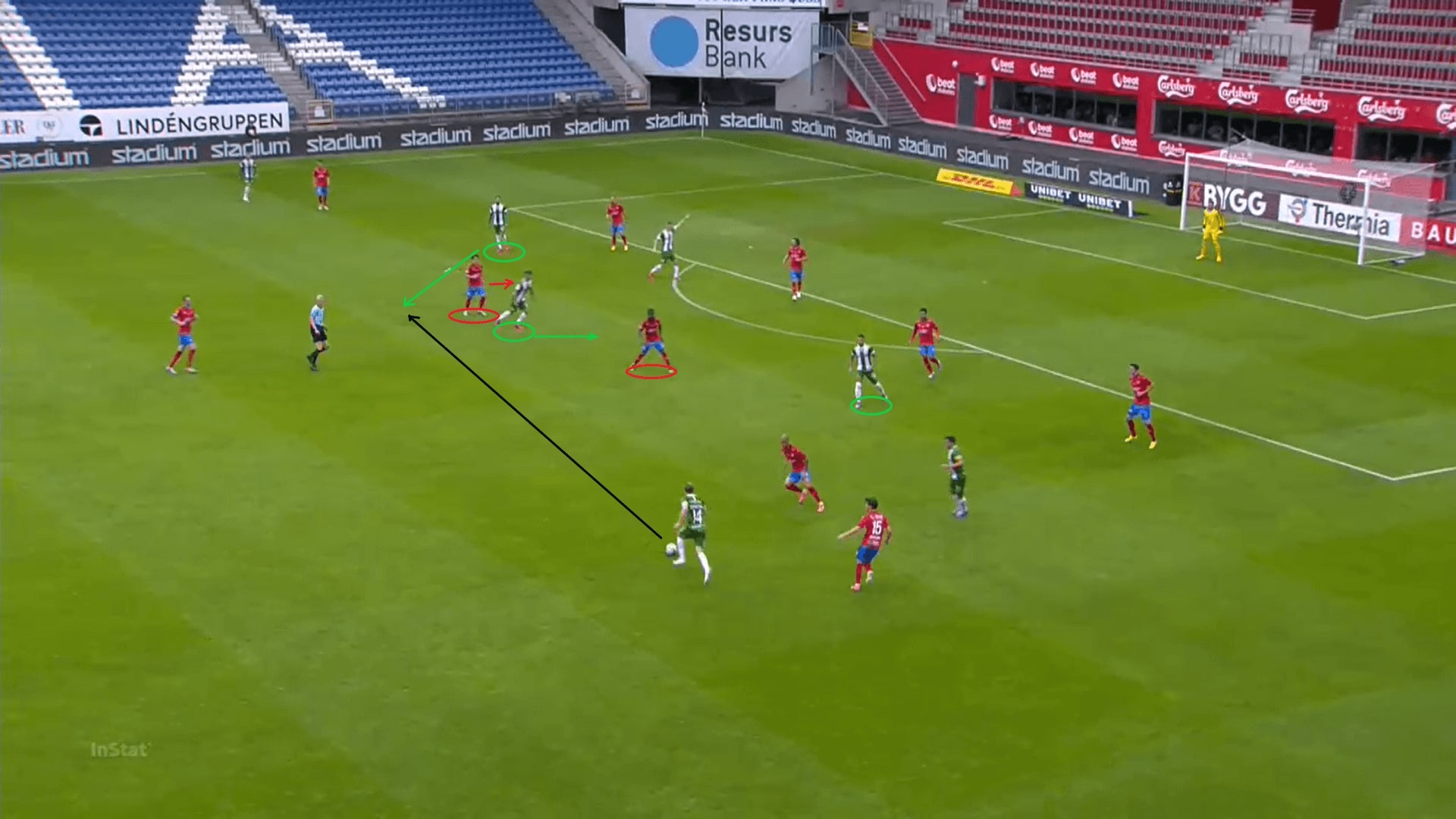 The attacking team could also generate a free player near the penalty box through movements. Using positional superiorities could occupy two defenders by one player. Here, Hendriksson Olsen followed the runner while Ravy Tsouka’s attention also went to the same player. This was far from ideal as one attacking player was affecting two defenders.

Since the level of pressuring intensity was seldom high enough to trouble the carrier like Gigović distanced himself from the ball instead of forcing into a duel by sprinting. The attacking team could pick the target at the half-spaces. 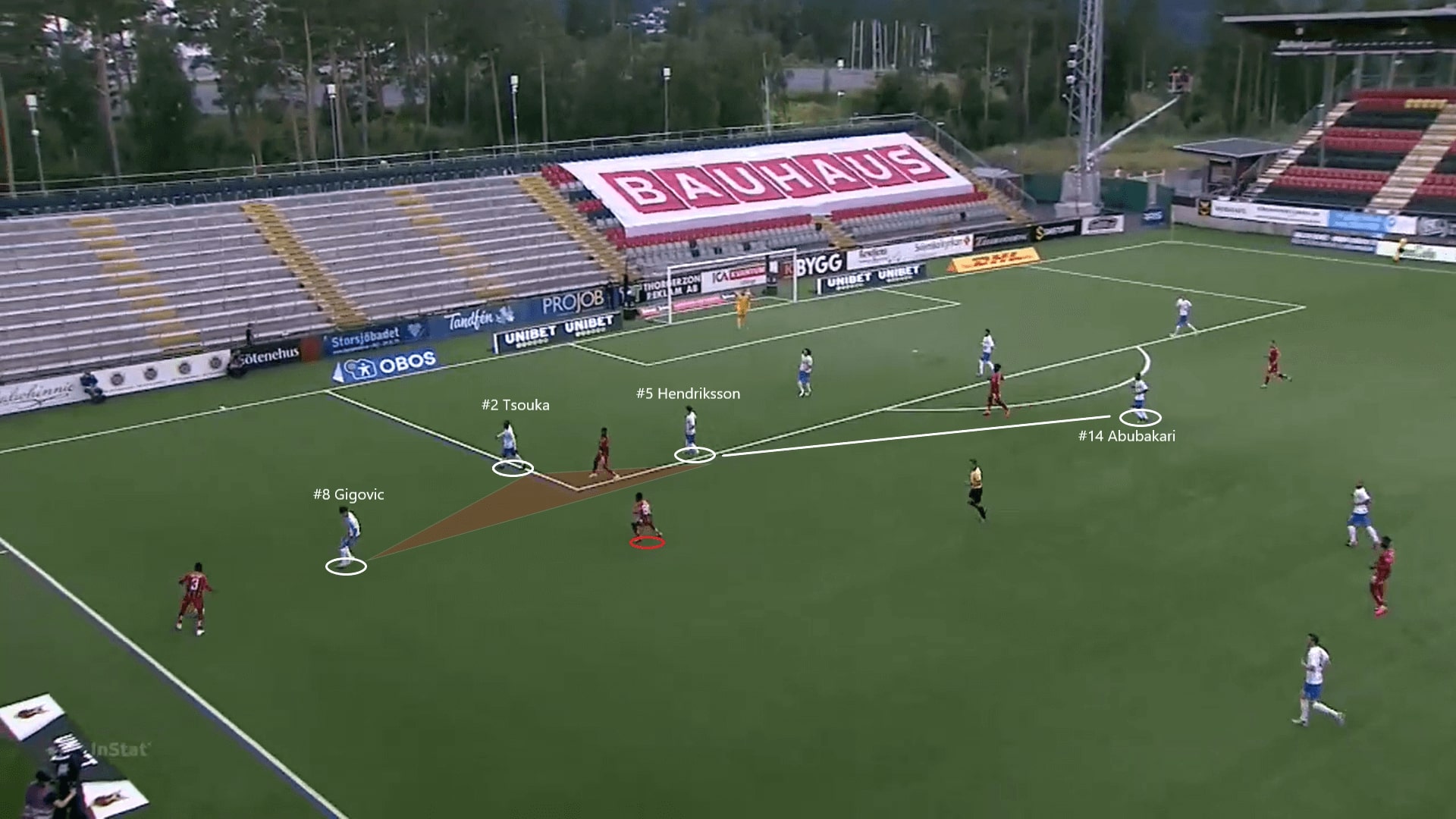 We also picked Diskerud as the subject of analysis, he is a good player on-the-ball, but not as a defender. The former Manchester City man was not used to defend as a centre-backs, several of his defensive habits were worrying.

The right centre-back was often being caught ball-watching instead of defending his ground or marking the opposition. It was related to his defensive awareness, conceivable since he was not a defender before.

The below image was a clear example. Even the runner went in front of Diskerud, the American player still has his attention on the ball and did not track the run, despite the target was going to attack the goal. 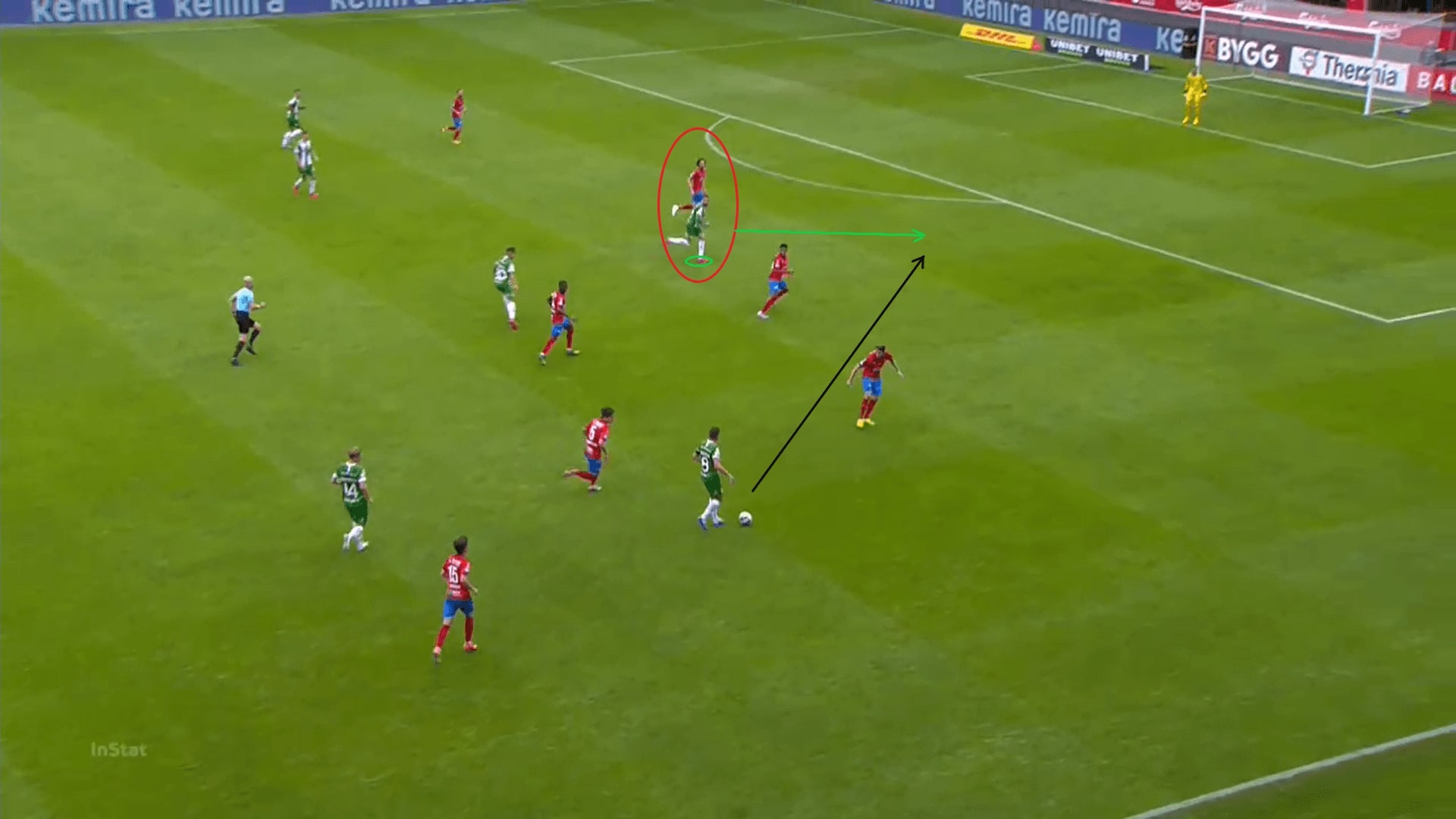 In cases like this was dangerous to Helsingborgs – Diskerud was being isolated. Given the man-oriented system, and Olsson tended to move wider to cover the left-back (as a chain effect of the gambling player – Svensson), simple wide movements could leave Diskerud being isolated

As an example, this was how Malmö created the momentum, by the diagonal-outward movement of Toivonen. Consequently, Isaac Kiese Thelin was in a 1 v 1 against Diskerud.

Also, Diskerud did not show enough aggressiveness as a defender. Recalling the Kiese Thelin last goal against Helsingborgs, Diskerud could have done better by narrowing the shooting the angle of the striker. 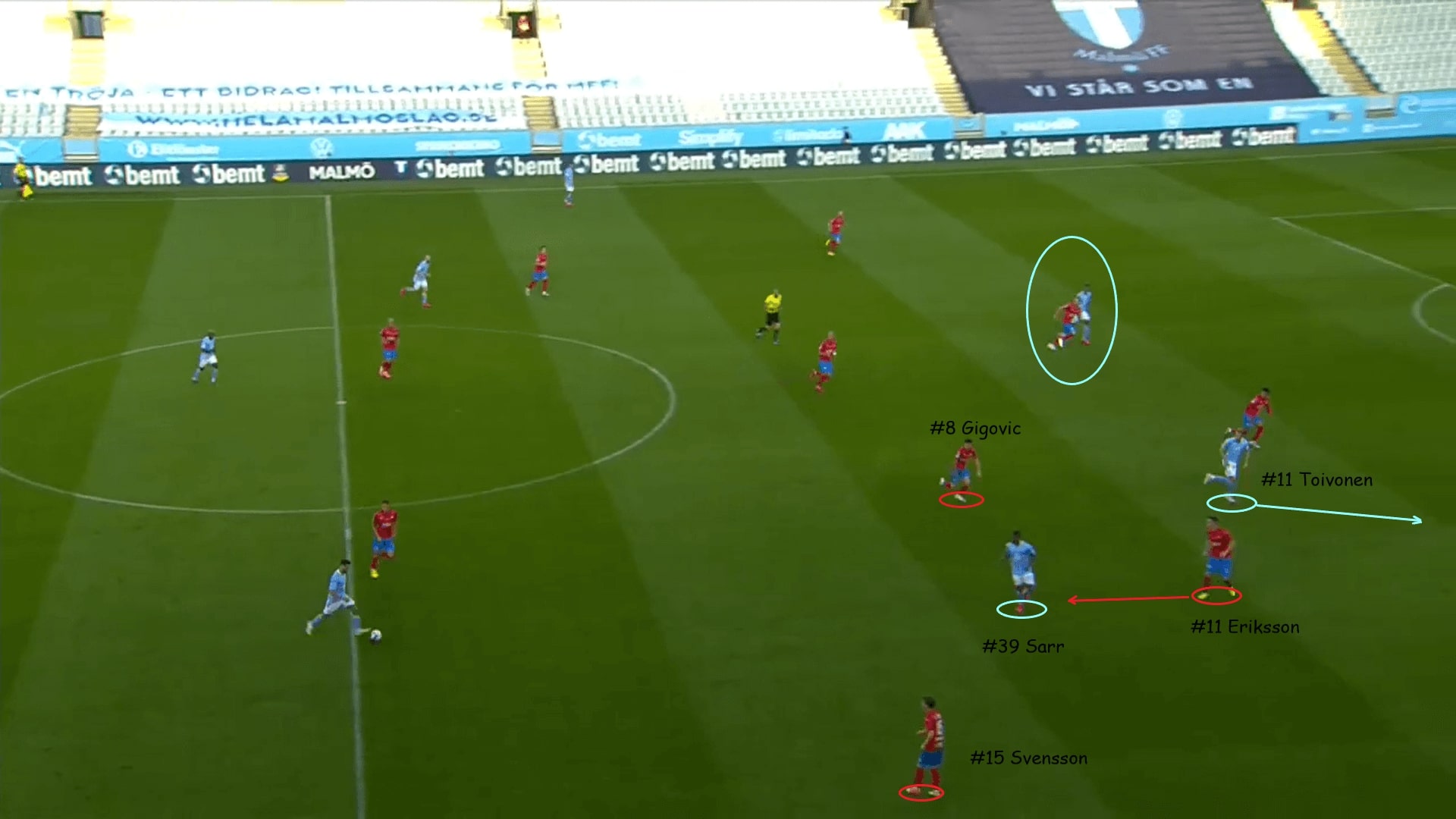 Helsingborgs already conceded 27 goals (16th) this season, also recorded 25.6 xGA (15th),  in the remaining fixtures, they have to improve the performance defensively. Diskerud has been a decent passer in the team, but it seems the defensive side of his attribute was not enough as a central defender.

Maybe Mellberg has the defensive tactics in his mind to boost the team, but he has to do it as soon as possible.