In the Super League 2019/20, Young Boys Bern are currently sitting in second place only due to a worse goal difference than St. Gallen. Under head-coach Gerardo Seoane, they use some interesting strategies such as high attacking full-backs, a narrow structure and a lot of crosses.

In this tactical analysis, we are taking a closer look at the tactics deployed at Young Boys Bern. Therefore, we will unveil the offensive as well as the defensive system of head-coach Seoane at Young Boys.

Young Boys usually set up in a 4-4-2 system with high full-backs and a deep double pivot during the attacking phase. The wingers will mainly occupy the half-spaces as can be seen in the positioning and passing network from their game against FC Sion below. One of the two forward players acts in a playmaking role in possession and is therefore usually positioned deeper creating a 4-2-3-1 shape. 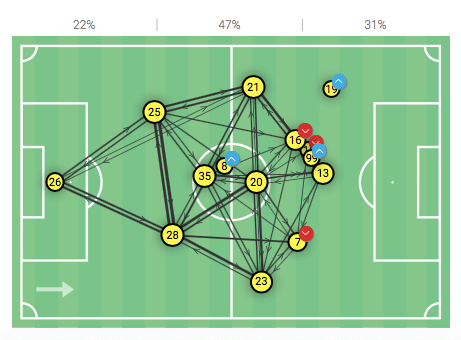 Depicting their style of play, Young Boys seem to follow a similar philosophy as we see from most of the RB sides. They create heavy overloads in central areas and only provide the maximum needed width. Sometimes, it even feels as if the width is neglected and a loss of the ball is tolerated just to make sure to counter-press with a lot of centrally positioned players and to keep the tempo of the game as high as possible.

With a lot of verticality provided by the high positioned attacking department which occasionally threaten the space behind the backline with deep runs, Young Boys can also tear the opposition apart vertically. This opens up space for the pivots of Seoane’s side to win and control second balls after having played the ball long in order to start a new attack.

The initial spacing during the build-up phase is as displayed in the next image. In the first build-up phase, the wingers will occupy the half-spaces or flanks and the full-backs initially stay in a deeper position. The double pivot occupy the pivot space together. That forces the opposition to move out with two central midfielders to actively press. If they do so, Young Boys could overplay the pivot space and directly play to their attacking department. Most of the time, the opposition will not risk to commit two of their centre-mids forward which allows Seoane’s team to play to either player of their double pivot with the help of a slightly diagonal staggering as one can see below. 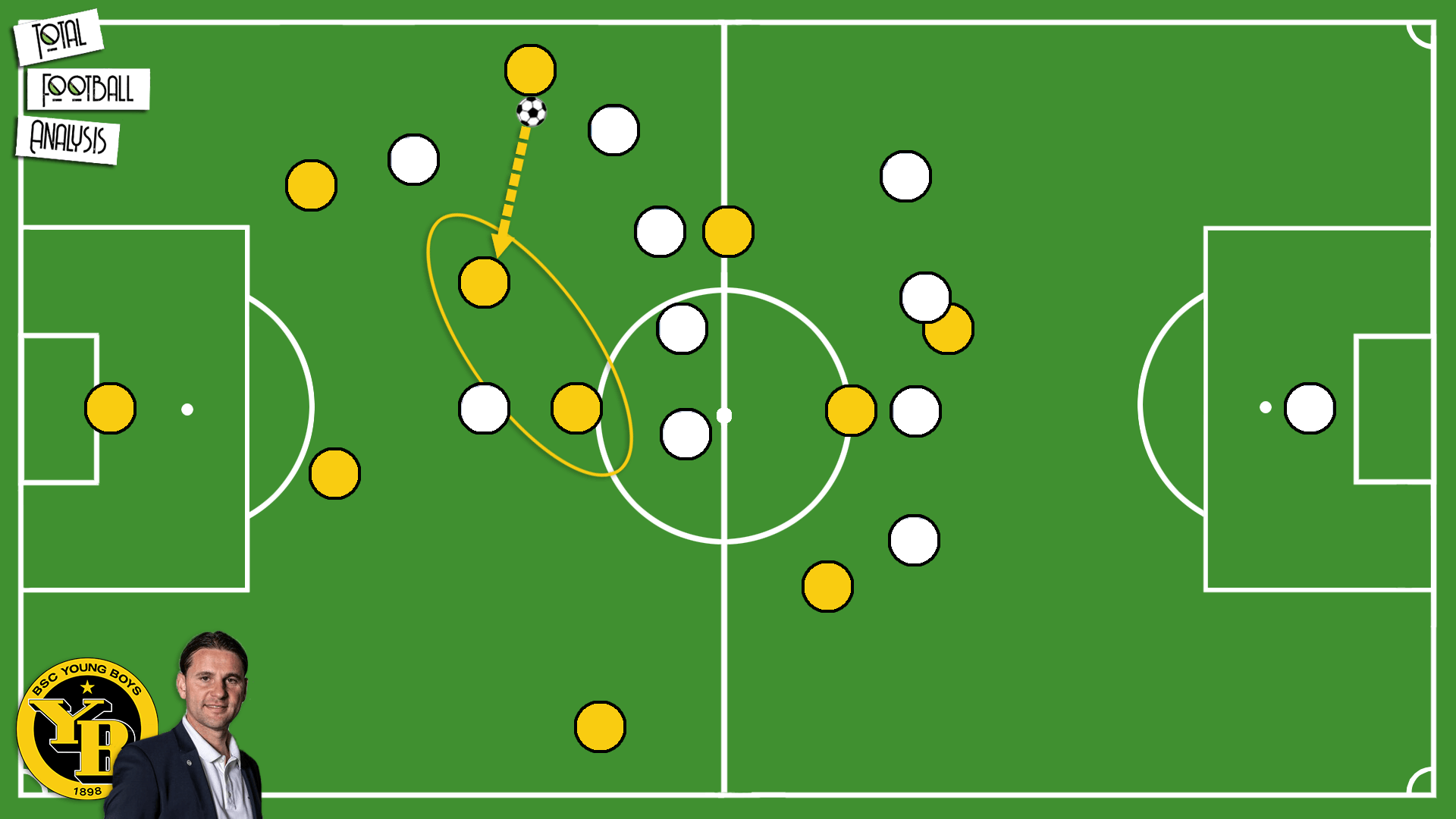 Once the ball has been progressed up into midfield or when Young Boys win the ball back from the opposition, the full-backs will be the only players to provide width and move high up the pitch.

The attacking players occupying the half-spaces and the centre will not only keep their positions. Instead, they will provide fluidity by interchanging their positions and situationally dropping into midfield to attract the opposition midfielders or offer a passing option for the player in possession.

However, an issue that sometimes appears and which is connected with their idea of spacing is that their full-backs can be pressed on the wing with only a few passing lanes available. Below, we can see their right-back being pressed without a short passing option available as the space in the half-space (marked in red) is not occupied. In such situations, the only outlet often is the long line pass which is unfavourable as it is simple to be defended, especially if the opposition full-back is already marking the winger as in the shown scenario. 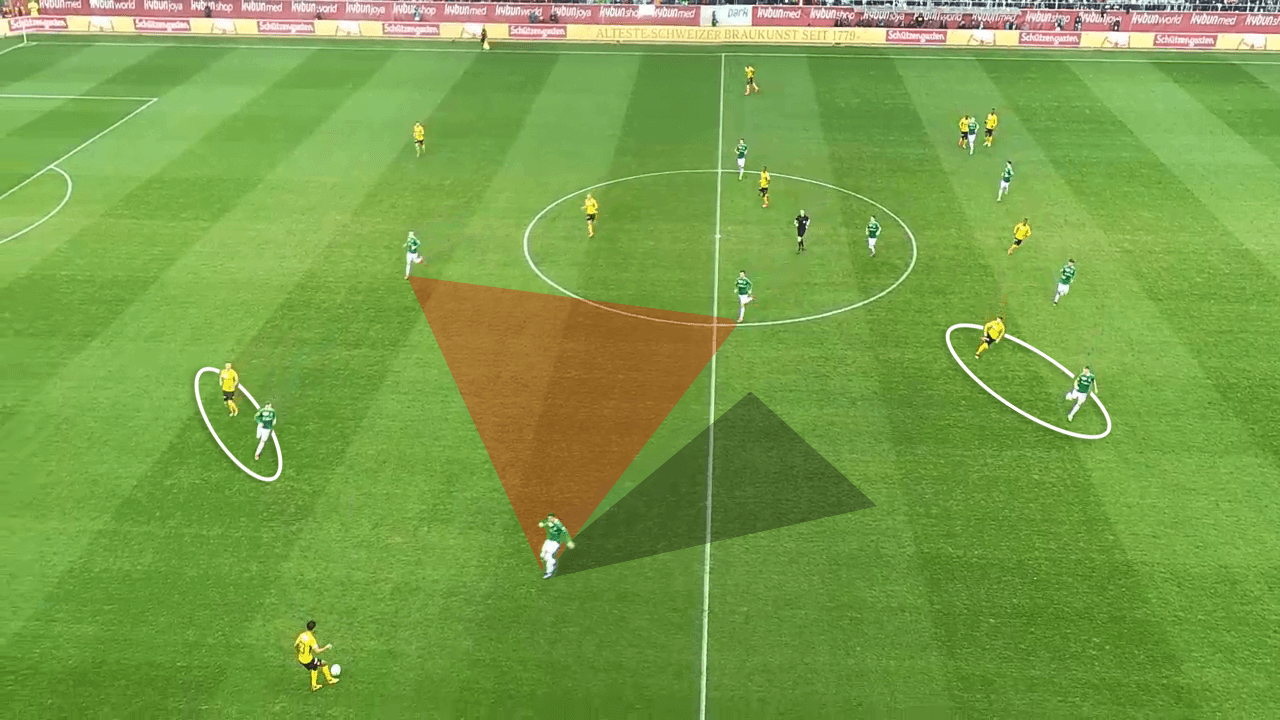 One of the most obvious things about Seoane’s Young Boys is the high positioning of their full-backs during the attacking phase. Through their overloads within the centre and the half-spaces, Young Boys can occupy the opposition defensive lines centrally and therewith open up space for the full-backs out wide. The following image highlights how narrow Young Boys’ attacking structure is and how this creates space out wide. 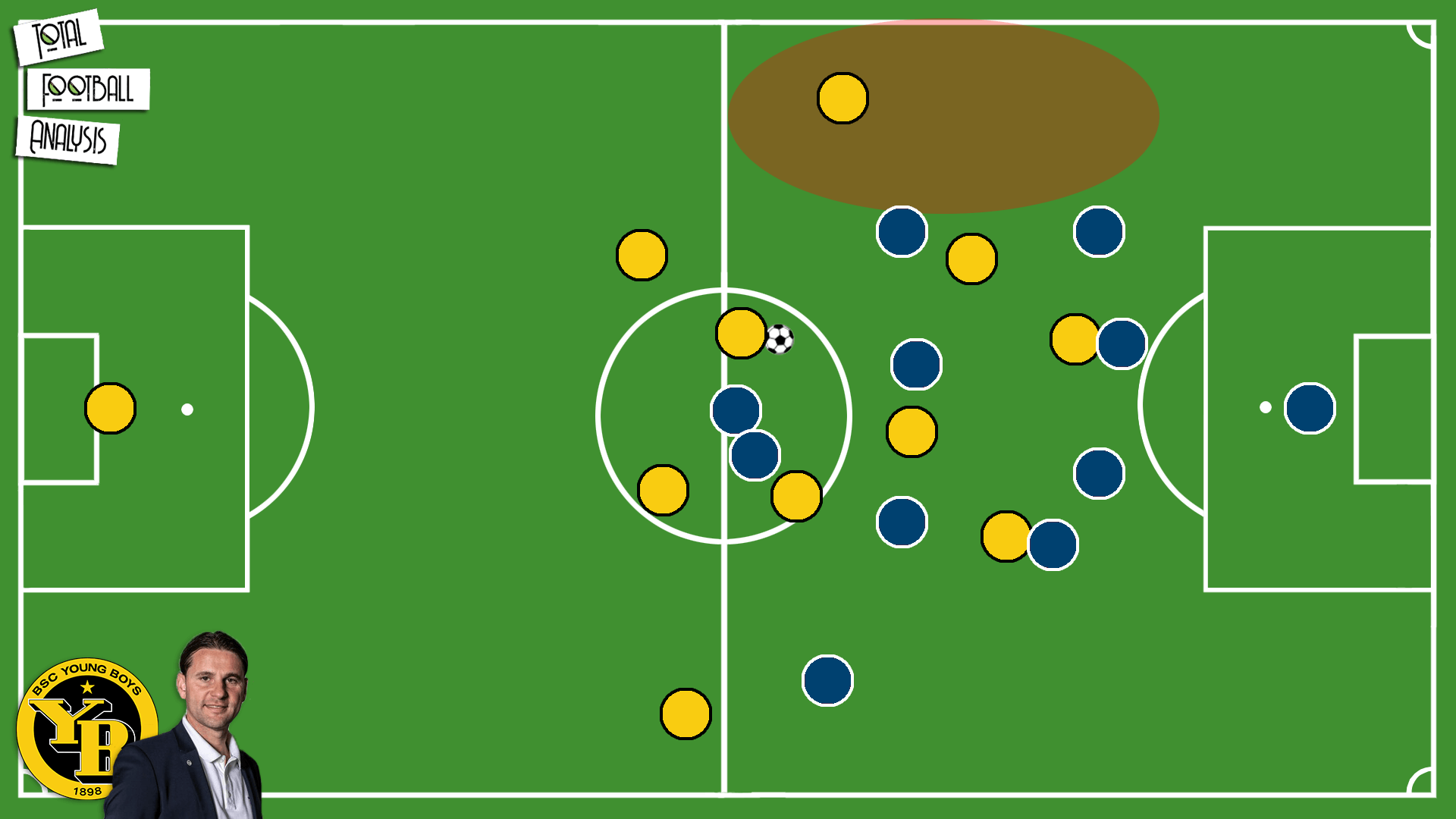 To have both full-backs simultaneously attacking high up the pitch obviously has consequences on the other players. Only a few sides allow both their full-backs to move up the line at the same time as it would leave the centre-back pairing exposed at the back. In the case of Young Boys, however, they balance these movements with their double pivot mainly acting in deeper areas. This often forms a box-like 2-2 structure in the centre like illustrated in the graphic below. 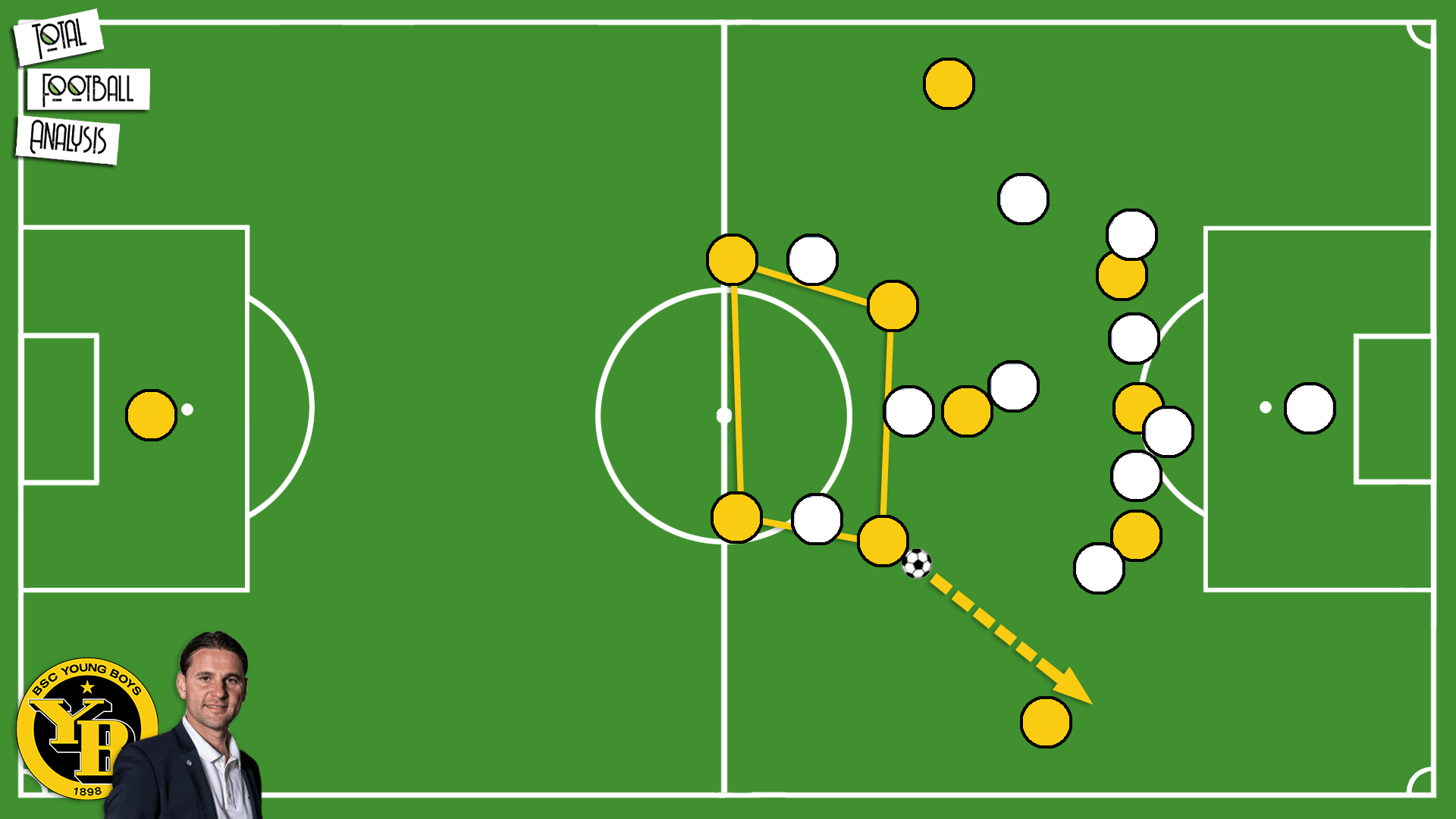 That way, they provide defensive cover. In case of a ball loss, Young Boys therewith have enough players at the back and especially in the central channels which pose to be the most important ones during transition moments as they are closer to the goal than the flanks. 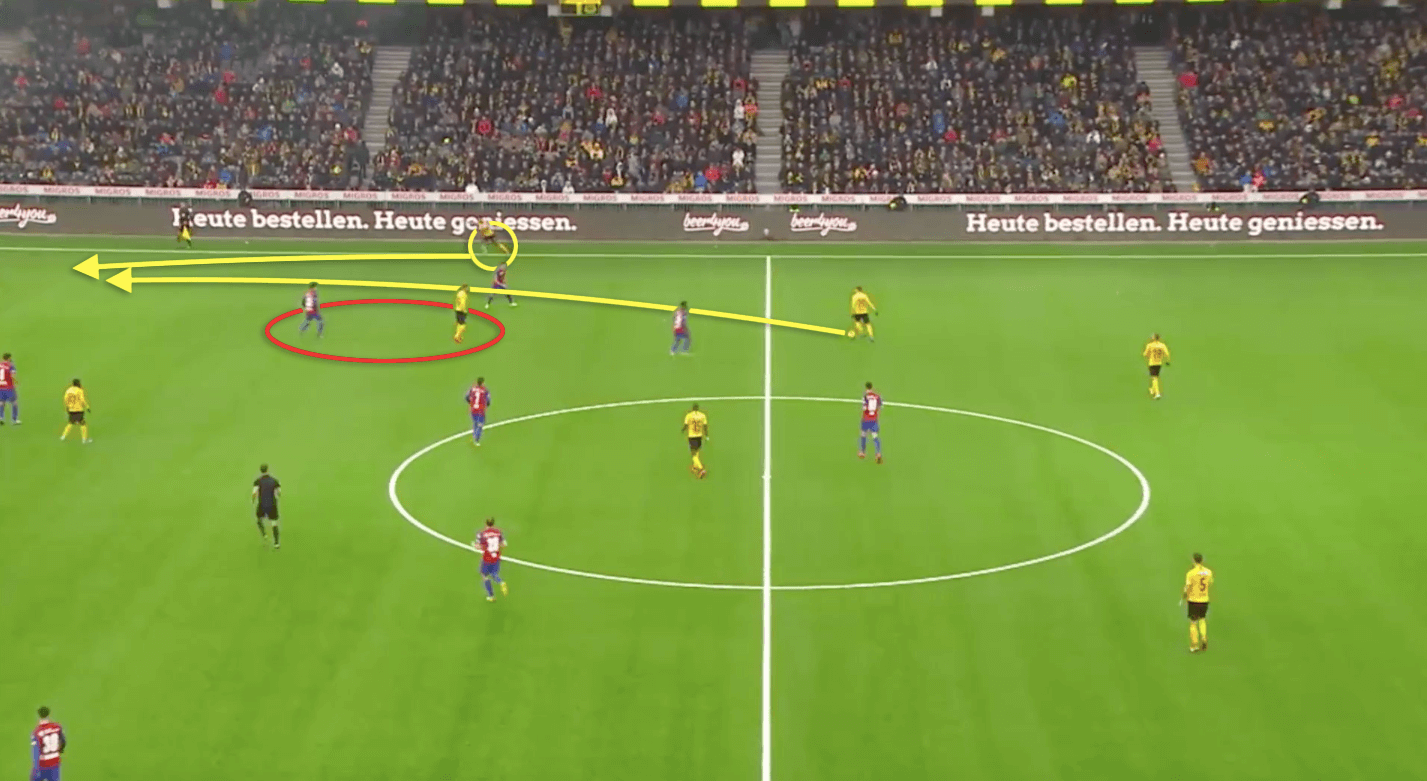 As the wingers are positioned within the half-space and the full-backs often progress that high up the pitch that they sometimes receive the ball out wide in an even higher position, the wide forwards will use underlaps to attract opposition players. Depending on the reaction of the opposition, they will then either send in a cross or use the underlap to get into the box with short pass combination play. As the next image shows, two forward players are ready to attack the box while Young Boys’ full-back is in possession of the ball on the wing. The underlapping run of his teammate creates space to cut inside and put in a cross. 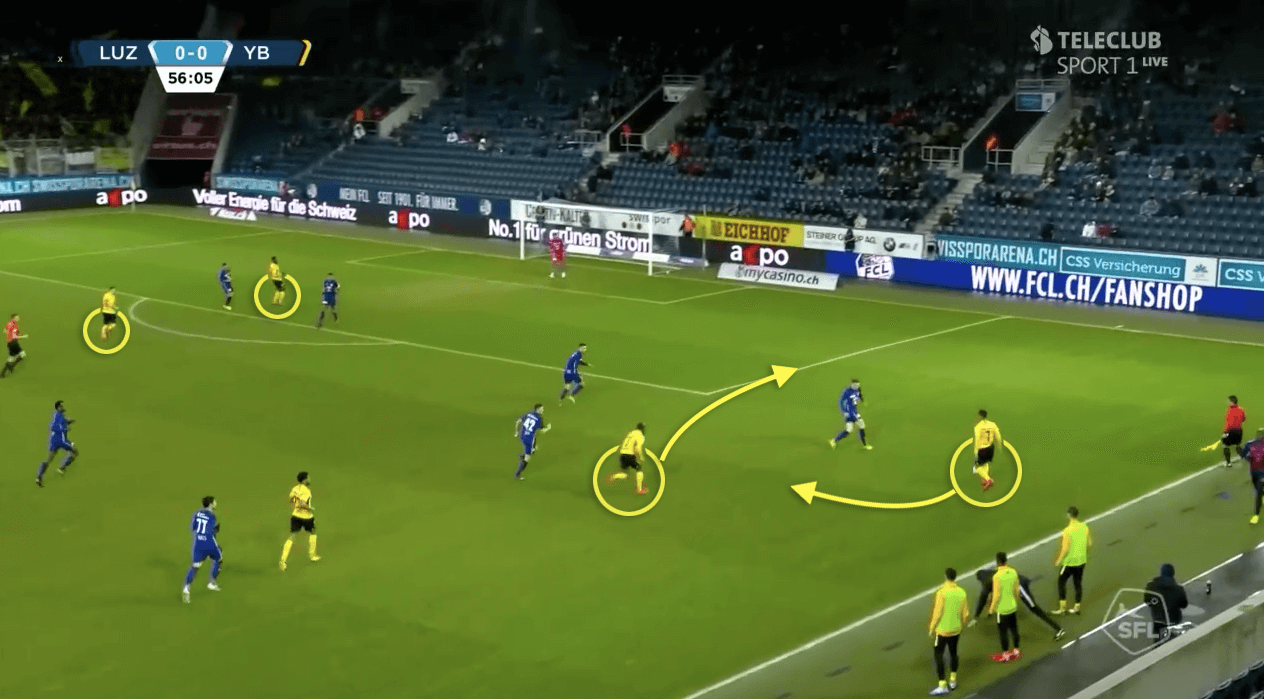 In terms of chance creation, Young Boys highly rely on their crossing from wide areas. With 22.18 crosses per 90 minutes, they do not only rank first in the Super League by far, but also provide an extremely high value compared to the international top sides. In the top five leagues of Europe, only Bayern Munich cross more often with a value of 22.96 per 90 minutes. Pep Guardiola’s Manchester City as the second-ranked side, for instance, put in slightly less crosses than Young Boys with an average value of 21.92 per 90 minutes.

The accuracy of Young Boys’ crosses, however, cannot keep up with the values of the absolute top sides. 32.2 % of the crosses find a teammate, which is not overly impressive compared to the 37.8 % of current leader Atalanta B.C. in this category. Nevertheless, given the high amount of crosses, an accuracy rate around one third is still a decent value. In the following, we take a closer look at the tactical background of these stats and examine Young Boys’ chance creation through crosses.

As their attacking trio is positioned very narrow, they can constantly threaten the opposition box which allows Young Boys to send in crosses at any given time.

And Young Boys often do not attempt to get to the endline to send in their crosses. Instead, they will cross rather early. As a consequence, the opposition defence is not being supported by the midfielders which leaves them with a numerical equality when defending in the box. Occasionally, Young Boys can even outnumber the opposition defenders in the penalty area such as in the case below where they created a 4v3 in the box. This often results in a free player at the far post. 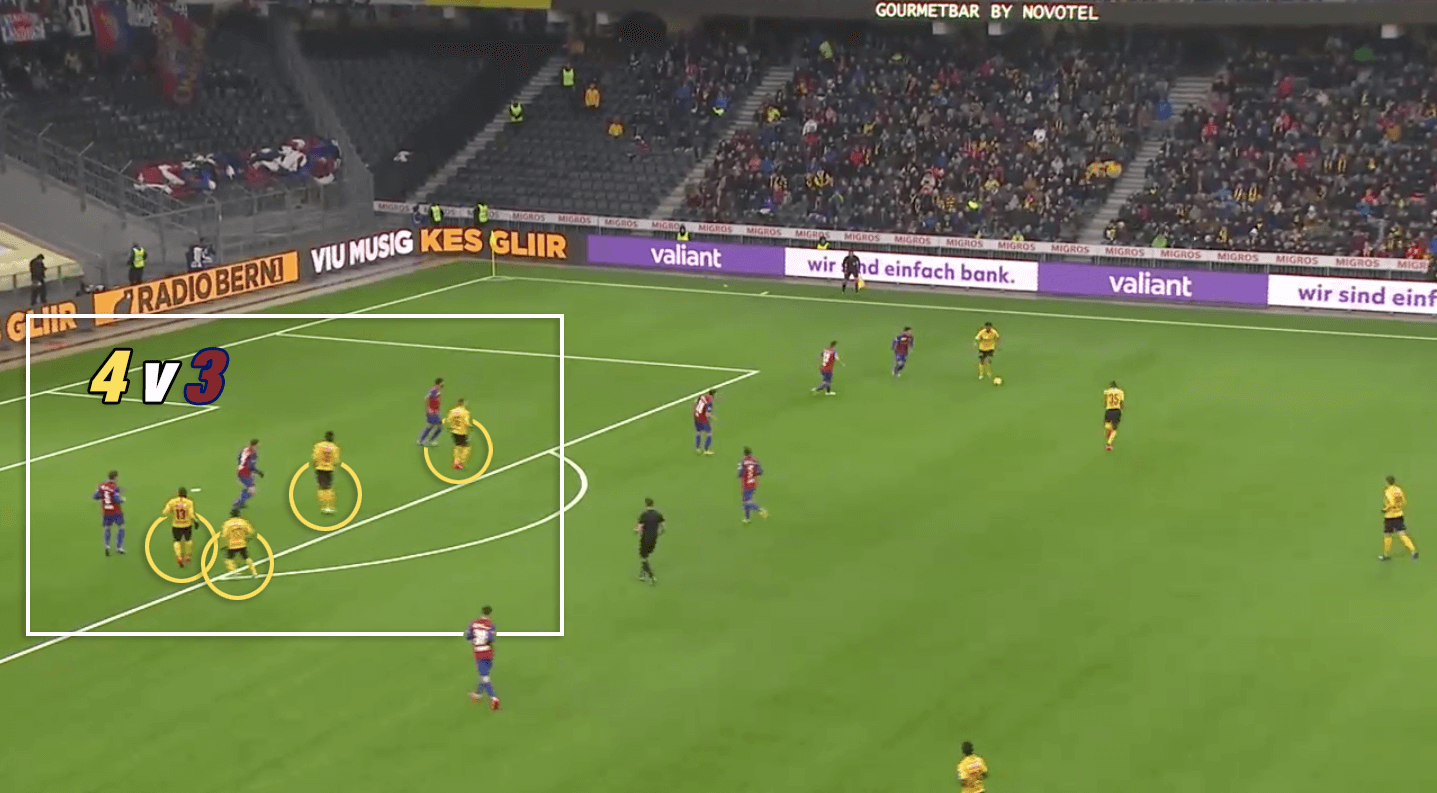 In addition to that, crossing early holds the advantage that there is space behind the defence. As a result, it is possible to attack this space with forward runs and with the right timing, these runs can create a positional advantage over the opposition defenders who can only react to the attackers’ movements. In the situation shown below, Young Boys can put in a cross into the space behind the back line and create a promising scoring opportunity that way. 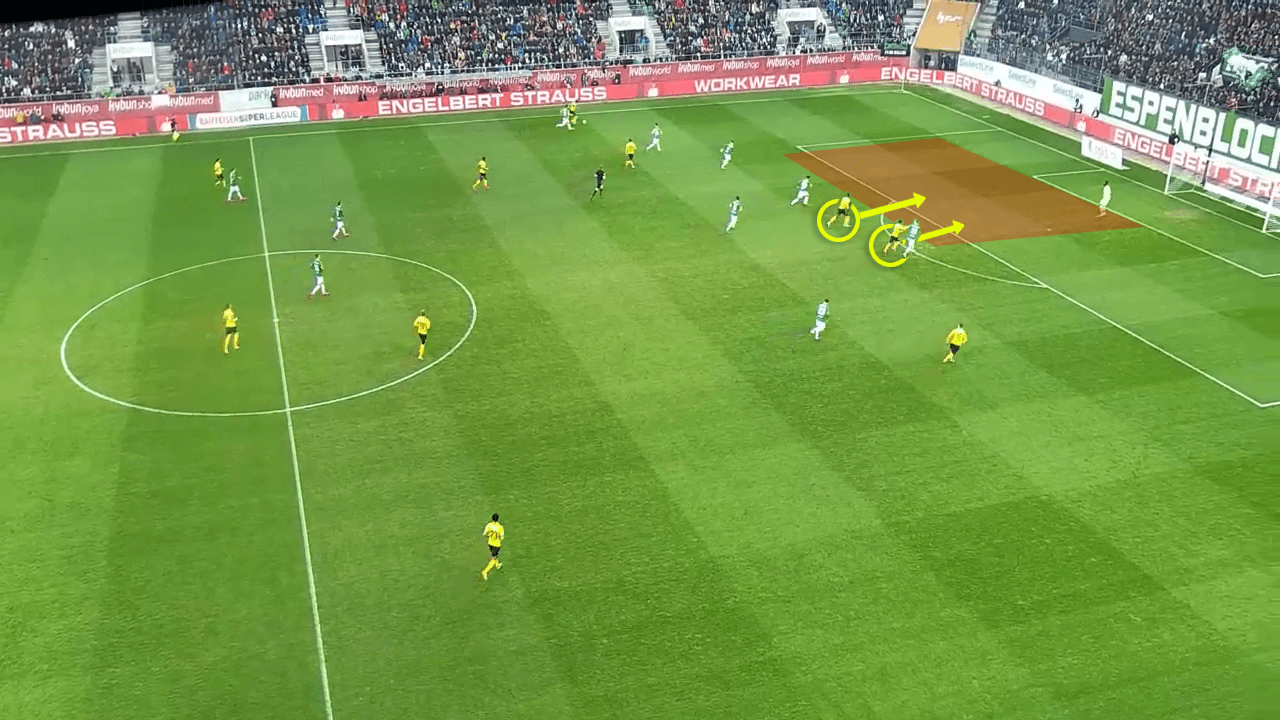 Once having reached the final third, their attacking players move into the penalty area very early, though. That sometimes leaves the wide player outnumbered on the wing. As a result, in the displayed situation, the ball-carrier fails to put in an accurate cross. 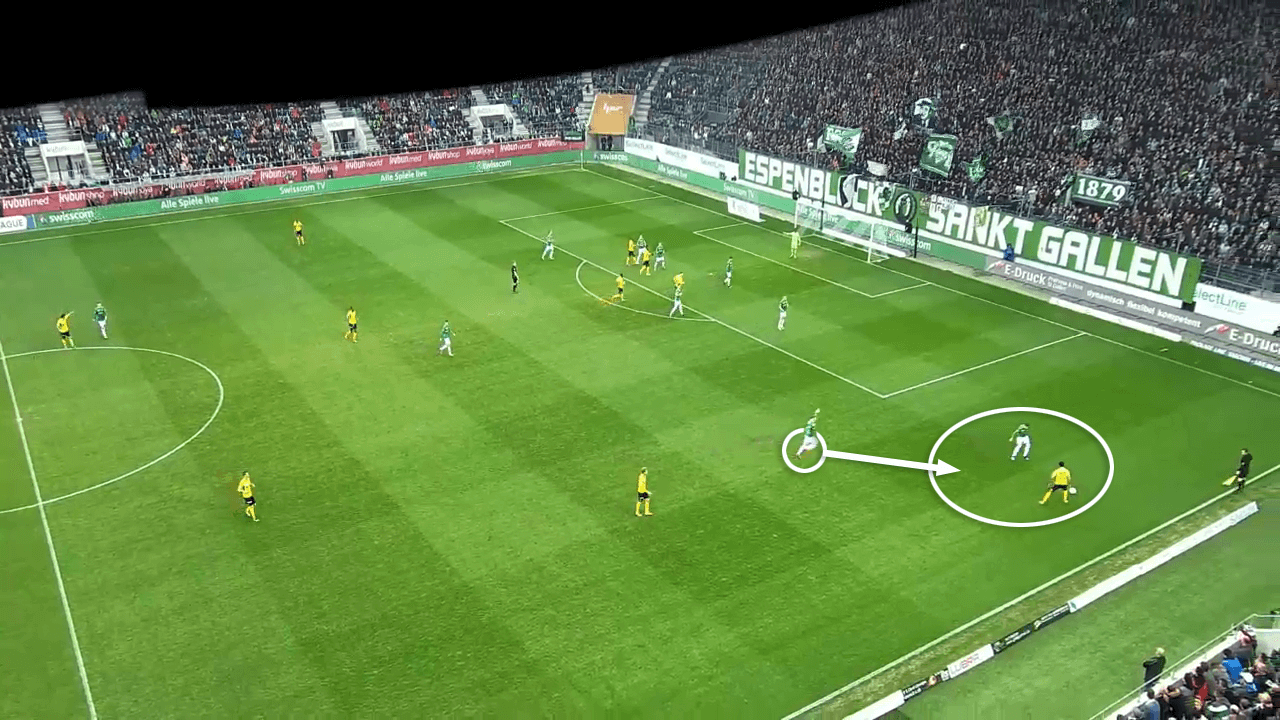 In general, Seoane’s side attempt to actively press and force the opposition to play long balls or imprecise short passes which they can intercept. With a PPDA value of 7.64 (passes allowed per defensive action), they press their opponents with a very high intensity in the opposition half.

Together with the defensive midfielders in front of the central defence, Young Boys are well set up to control the long balls played by the opposition. In the image below, one can see how the centre-backs form a triangle with one of the pivots and control the long ball. This enables Seoane’s to recycle the opposition long balls to own possession phases which lends Young Boys a true dominance. 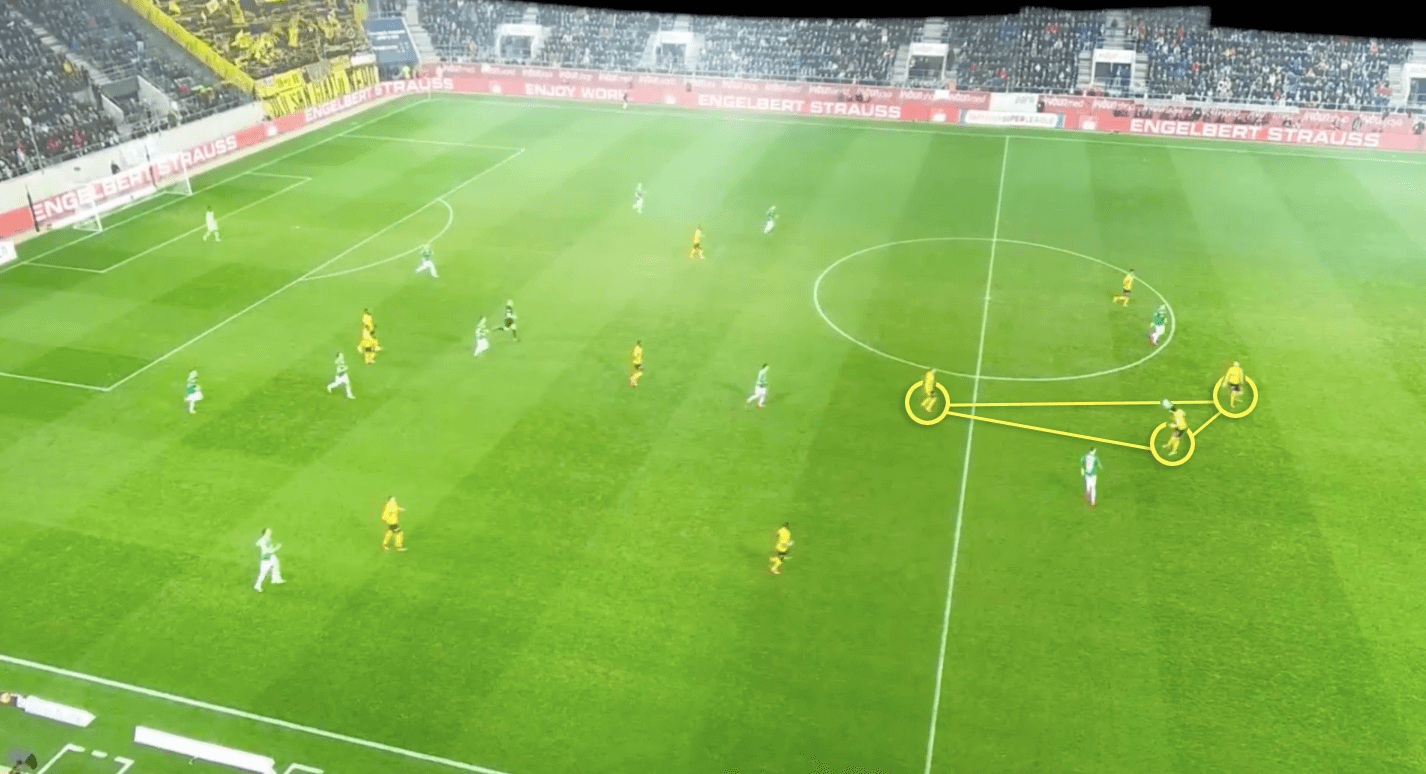 To press the opposition up front, Young Boys will use their basic 4-4-2 formation. Nevertheless, the shape will change depending on the ball position in order to ensure that they have the needed staggering to apply pressure on the ball-carrier but still provide enough cover behind the pressing player.

One of their pressing traps is the pass to the full-back. After Young Boys shut down passes into central midfield, the opposition will only have the option to play the ball to either full-back. What happens when the ball is played to the full-back can be seen in the next graphic. The winger will move out to press using his cover-shadow to prevent a pass inside. Meanwhile the ball near the striker cuts off the back pass while the ball far one prevents the opposition from switching sides. 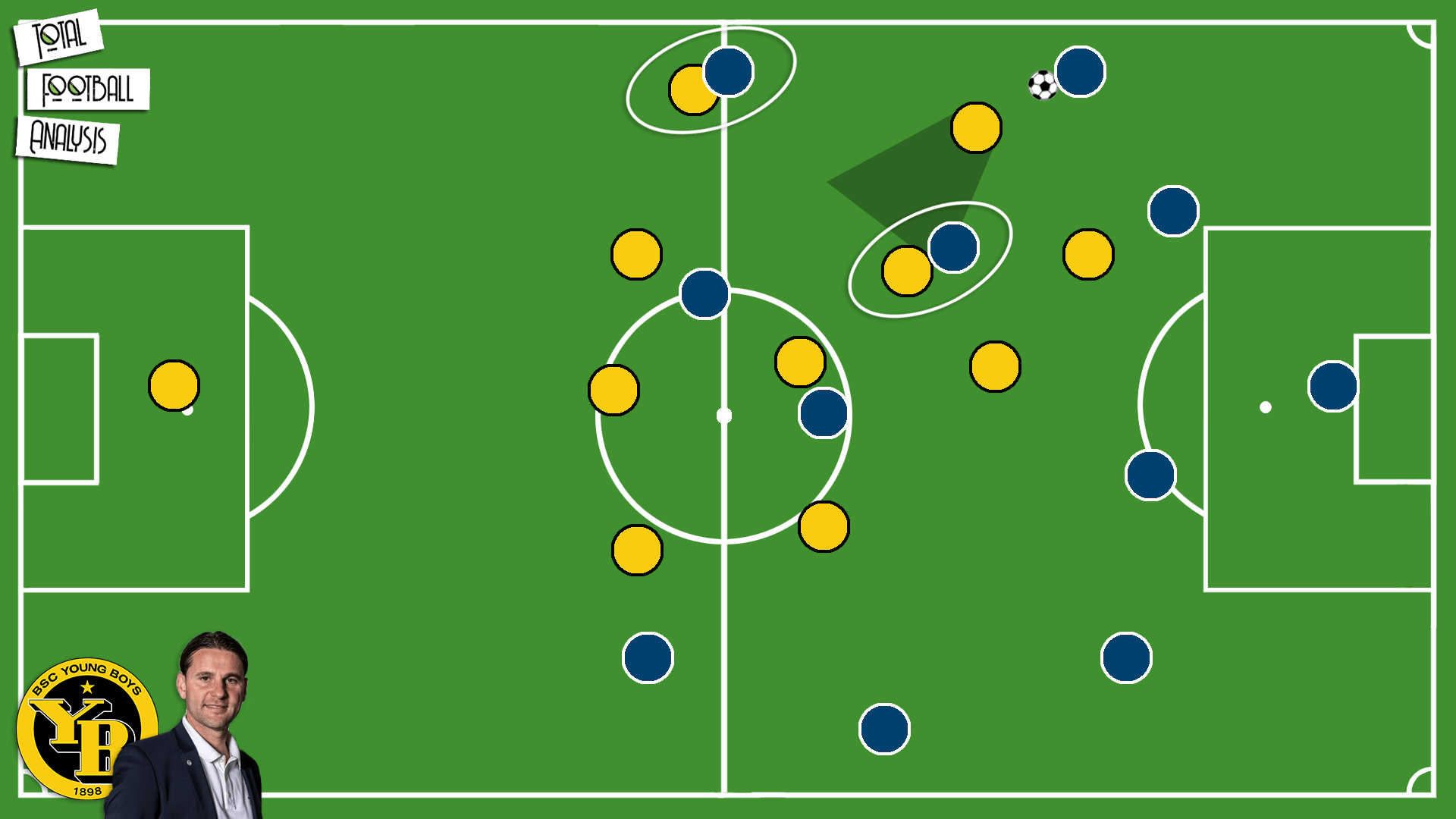 Their narrow attacking structure also allows for quick counter-pressing. As displayed in the next image, Young Boys lost the ball but quickly counter-press with an extremely narrow shape. This enables them to win back the ball immediately. After regaining possession, they quickly switch play towards their free full-back on the far side. 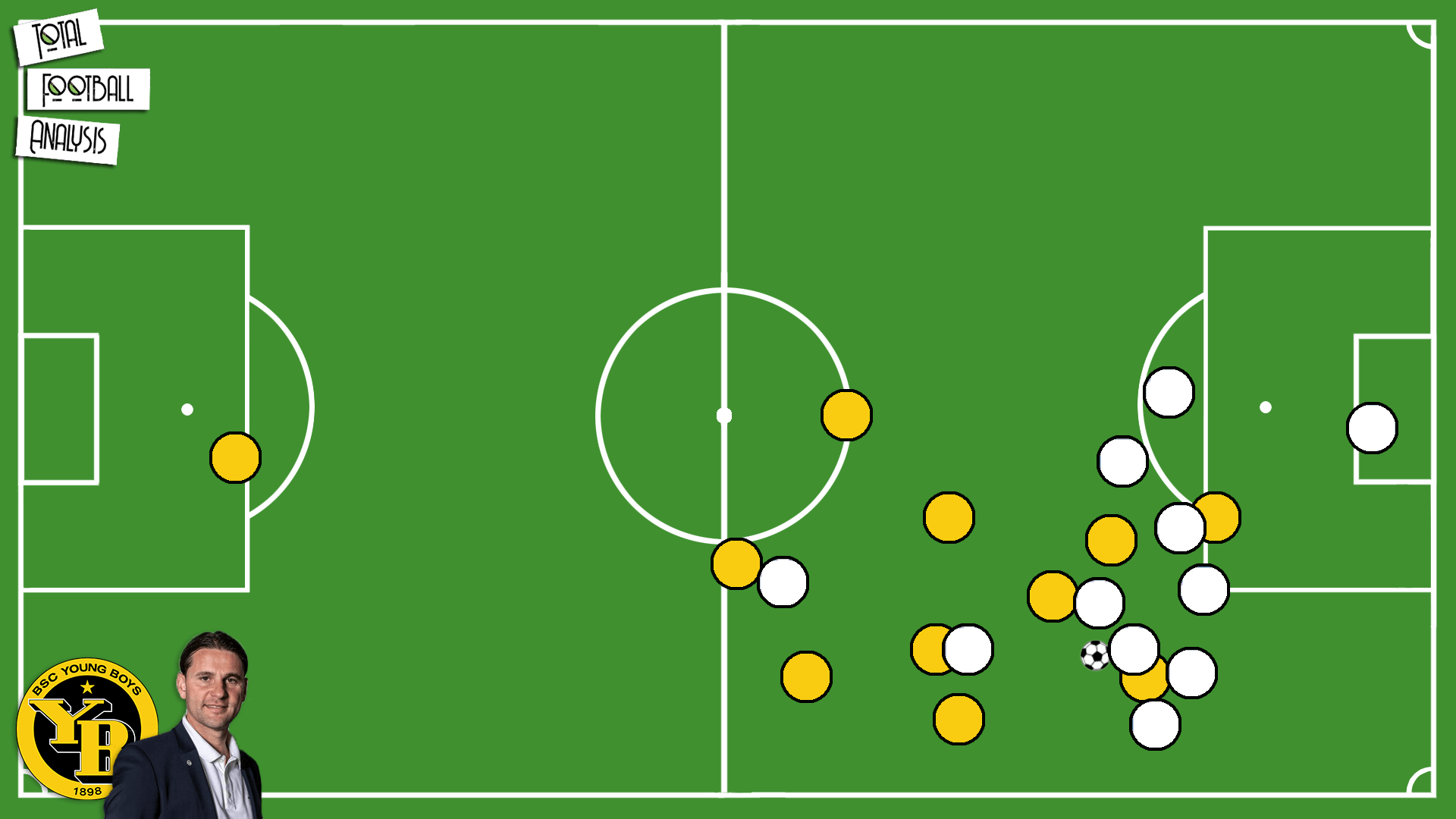 After losing the ball, Seoane’s side usually shifts towards the ball quickly. Note how they then make sure to prevent the opposition from playing forward in the next image. Through shutting down all possible passing lanes by using the cover-shadow and pressing the ball-carrier, they try to achieve the same as with their pressing during the defensive phase. Young Boys want their opponents to play imprecise short passes or long balls which they can then use to possess the ball for themselves again. 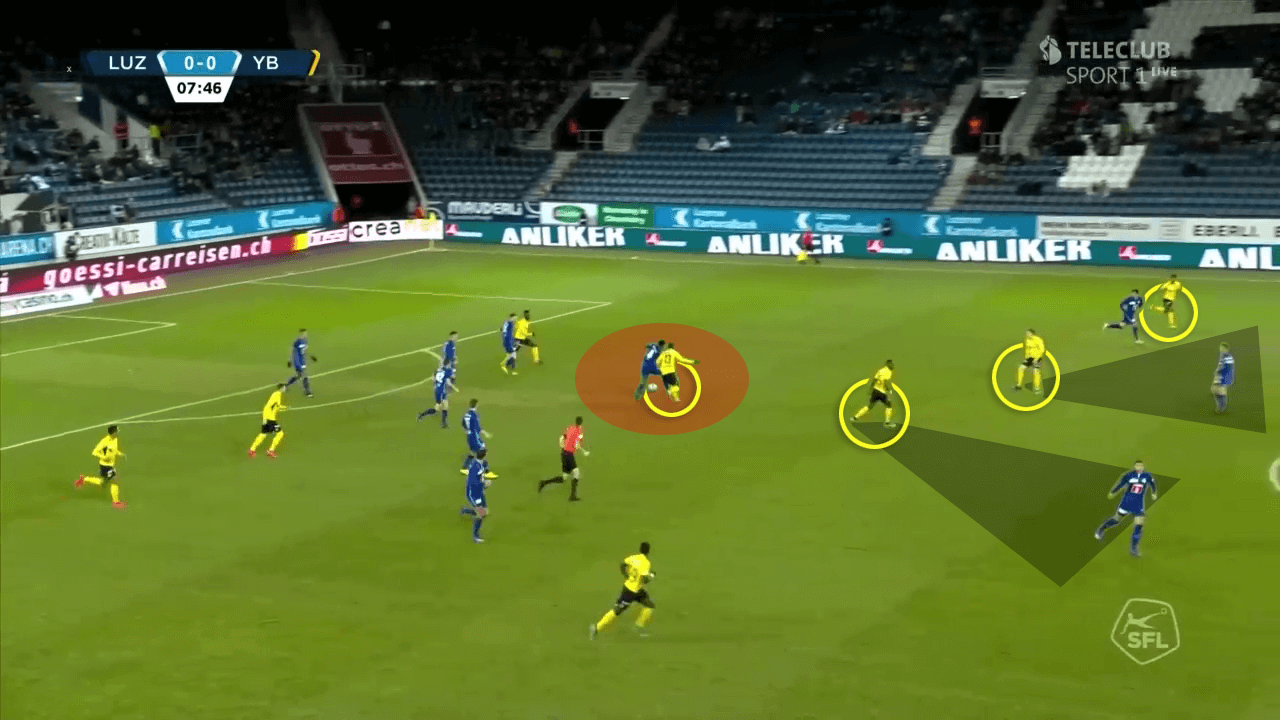 All in all, Young Boys are a dominant team that like to possess the ball, attack through the wings and actively press the opposition with a high intensity.

Different to other sides that overload the central areas, though, Young Boys mainly use them to create space out wide as explained in our analysis. With their attacking full-backs they can then progress up the pitch and threaten the opposition defence with crosses. Due to the high tempo, Seoane’s Young Boys are entertaining and definitely worth a watch.