The QNB Stars League is one of the fastest-growing leagues in the world. With local talents coming through the ranks and European immigration at an all-time high, QNB Stars League has definitely started to elevate its level. In addition, the league is also home to some aspiring managers who are bound to be at top European clubs in the near future, take former Barcelona man Xavi for example, which makes the league tactically appealing as well.

Continuing our coverage of this thriving league, that is aiming to achieve Asian dominance, this data analysis will focus on the use of data and statistics to find the best attacking midfielders in Qatar’s QNB Stars League.

The analysis will take eight metrics into consideration to analyze various offensive aspects listed below:

1. Dribbling: The domain will take into account dribbles attempted per 90 x dribbles success percent. These metrics aim to identify midfielders that prefer to dribble and will examine their technical abilities by comparing the percentage of dribbles completed.

2. Ball Progression: This domain will be about finding midfielders that are able to progress the ball forward, via progressive runs, progressive passes, or both.

3. Effective chance creation: We’ll look across four different metrics like xA per 90, passes to penalty area per 90, smart passes per 90 and key passes per 90 to examine midfielders that stand-out creatively.

4. Goal-scoring ability: Under this domain, we’ll look at midfielders that are effective in finishing and are able to score goals.

After examining all these domains, we’ll look at three midfielders that stand-out offensively among the 65 midfielders used in this analysis. 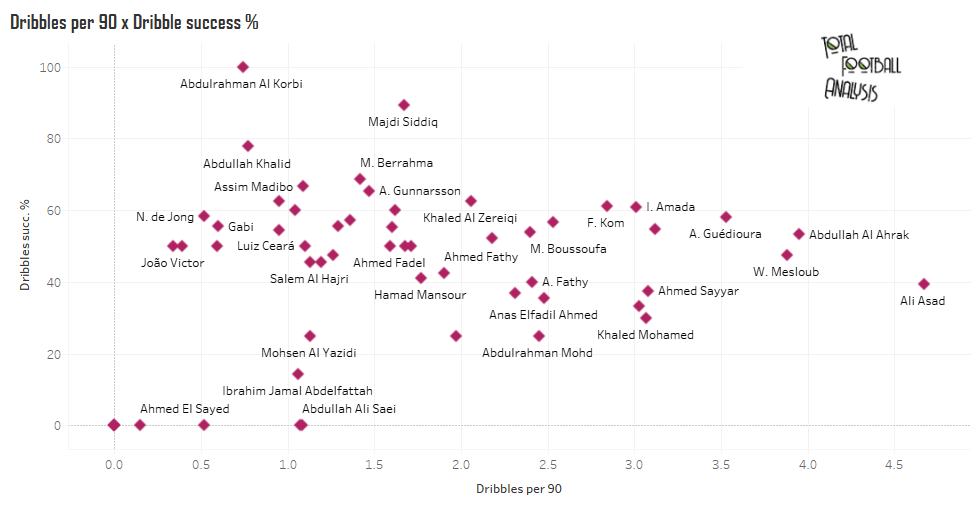 Looking at dribbles attempted per 90 and percentage of successful dribbles, we aim to find midfielders that can beat players and make runs to facilitate the forward line. One name that immediately stands out considering the dribble success percentage is Abdulrahman Al Korbi. Since the sample size for Korbi is too small (only 84 minutes played), we’ll take him as an anomaly. Considering a fair amount of minutes played (700+ minutes), we’ll take a few names that look balanced. Walid Mesloub, Mbark Boussoufa, and Ibrahim Amada are the midfielders that seem to be very good in this domain.

In terms of most dribbles attempted, Al Sadd’s Qatari midfielder Ali Asad comes forward. Asad attempted more 4.67 dribbles per 90 but his success rate was below 40%, making his final product weaker than the three midfielders mentioned above.

In this domain, we’ll find players that were good at progressing the ball during the 2019/20 QNB Stars League. Since we’ve used progressive runs per 90 and progressive passes per 90 as our metrics, we’ll divide the players into three categories:

In this domain, we’ll look at the midfielders that are able to create chances and produce assists more effectively. First of all, we’ll take key passes (described as “a pass that immediately creates a clear goal-scoring opportunity for a teammate who in turns fail to score” by Wyscout) per 90 and smart passes (“a creative and penetrative pass that attempts to break oppositions’ defensive lines to gain significant advantage in attack”) per 90.

Dheyab Al Anabi’s name sticks out at the top if we look at passes to penalty areas per 90, but we’ll consider him an anomaly as he’s just played 84 minutes in total. Looking at the efficiency, i.e, xA yield relative to passes in the penalty area, the same set of midfielders already mentioned above come in front. Boussoufa, Mesloub and Al Ahrak’s xA per 90 figures stand out. Boussoufa’s xA per 90 figure of 0.22 is equal to Mesloub, but Mesloub’s passes to the area per 90 is lesser than the former’s, making him more efficient. Abdullah Al Ahrak’s xA per 90 is 0.16 and his pass accuracy is relatively higher in comparison to Boussoufa and Mesloub’s passing accuracy towards the penalty area.

Ali Asad places himself in the elite list under this domain as well. One new addition to the list is Al Rayyan’s Abdulaziz Hatem, who averages 0.15 xA per 90 and has been an important part of Al Rayyan, playing 2200+ minutes this season. 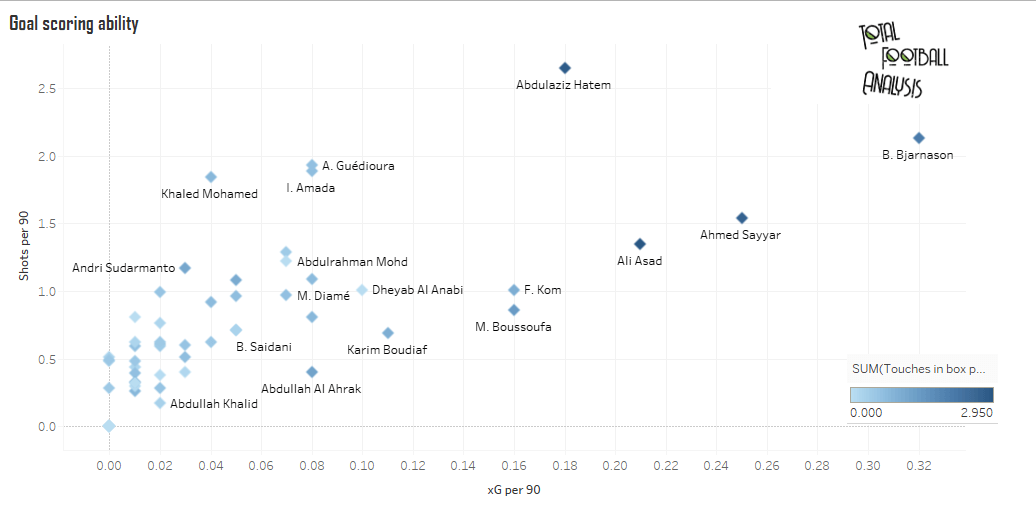 In this domain, we mainly look at two metrics, shots per 90 and xG per 90. This will help us to know the quality of shots that each midfielder takes and how much the midfielder is involved in the shot-taking process. Similarly, the darkness of points gives us a hint of how much a midfielder touches the ball inside the opposition box.

Abdulaziz Hatem, the same midfielder that we pointed out for xA yield, takes the highest number of shots among QNB Stars League midfielders. The fact that his xG per 90 is still relatively lower indicates that he takes shots which have a lower xG value. We will exclude another stand-out, Ahmed Sayyar of Al-Sadd, as he doesn’t fulfil our criterion of 700+ minutes of playing time.

However, we have another Al Sadd representation here – Ali Asad. He yields 0.21 xG per 90 taking 1.4 shots per 90 and was heavily involved inside the box, as per the scatterplot above. This briefly shows Ali Asad’s ability to get into a better position and take a shot.

Now that we’ve analyzed all our domains, we’ll shortlist the top three midfielders that stood out in our analysis.

QNB Stars League undoubtedly has some fine midfielders at the Asian level and is seeing the rise in number as time goes by. However, this data analysis looked at the midfielders’ qualities only statistically and not tactically- meaning this was a brief and rough overlook to start the scouting process. Based on this data analysis, we will continue to keep an eye on Qatar’s domestic league to produce scout reports which will be more detailed and will keep an eye on several other crucial aspects to recognize players’ overall performance.