Finding the best centre-backs in the Segunda Division – data analysis

With the Segunda Division 2020/21 season kicking off, I thought it’s important to know the players to look out for! Hence starting from the back, I decided to look at the centre-backs who were outstanding in their previous season based on their stats. In this data analysis, we will try to find out the best centre-back purely based on data and statistics. The analysis is going to be on target and we will only look at the key features corresponding to a successful centre-back.

To begin with, we first remove the players who were promoted to LaLiga as we are trying to find the centre-backs to look out for this season in the Segunda División and will only look at players who have played a minimum of 800 minutes. As mentioned earlier, we would only look at the key features and shortlist accordingly.

The scatter plots would have four boxes, out of which we would only be looking at the top right corner box which typically means the best in both the metrics we took and they’ll be in red dots while the rest will be in blue. Since many of them would have made it to the top right corner, we will again divide the box into four, and look at the right top box which means they are best. We would also only look at the stats who are in the final right top corner box, while the others will be noted. We would only look at the players who keep occurring in our shortlists and would neglect players who have performed well in only one set of the metric. 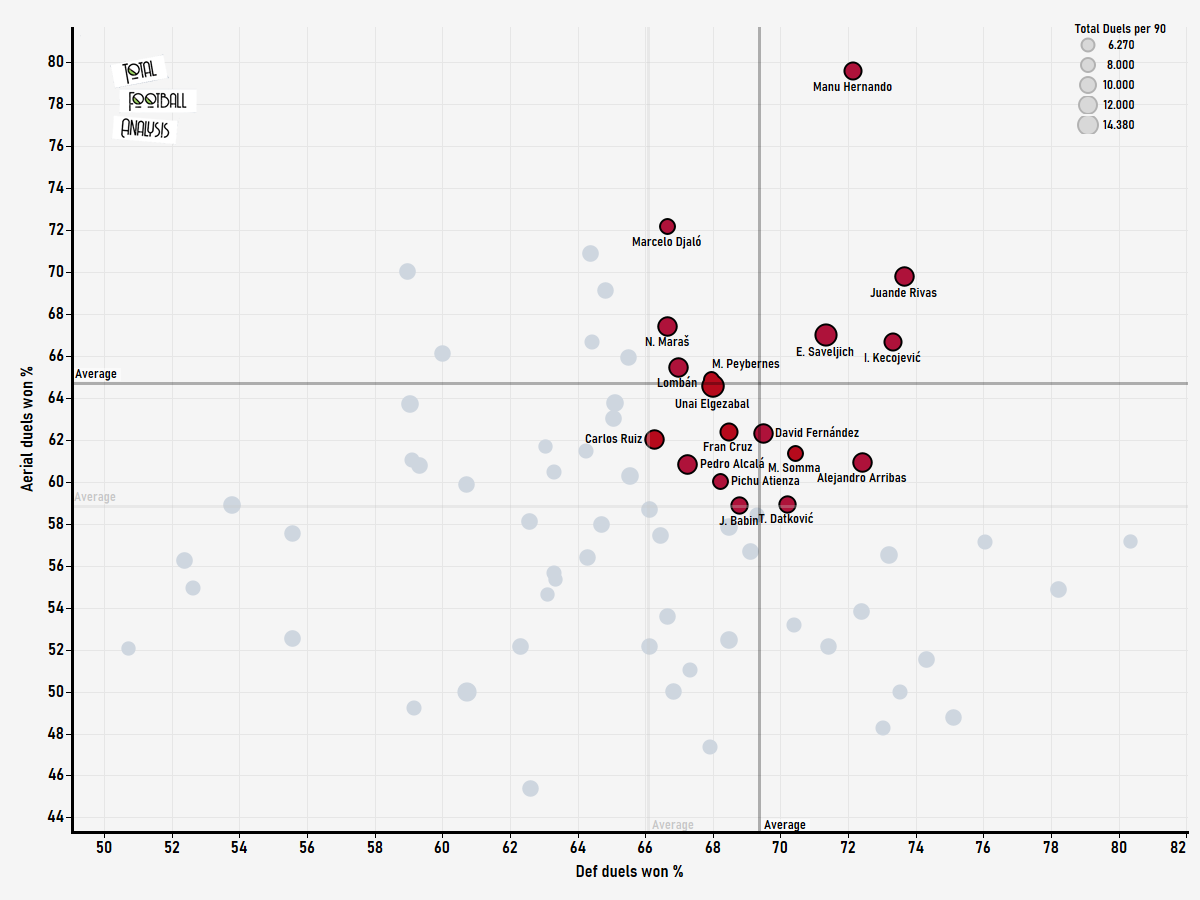 A bunch of players have made it to the top right column, but only four have progressed to the extreme right corner. On top of the list stands the 22-year-old Manu Hernando a loanee from Real Madrid (third tier), sees success in 79.95% of his aerial duels and 72.15% of success in his defensive duels while he involves himself in as much as 9.12 duels per 90. The next player to be noticed is Juande Rivas, who has the highest success percentage of 73.68% in defensive duels while his victory in aerial duels holds a success percentage of 69.77% while he participates in 10.25 duels per 90 on an average.

The remaining two players in our shortlist for this first section are Esteban Saveljich and Ivan Kecojević. Both being experienced players enjoy 67.01% and 66.67% success in aerial duels respectively while their defensive duels success also holds a similar percentage of value 71.36% and 73.33% respectively. It’s to be noted that Saveljich involves himself in 13.87 duels per 90 which is quite impressive while Kecojević involves himself in 9.16 duels per 90.

Moving on with our analysis, we would now look at a few more defensive attributes of these players. 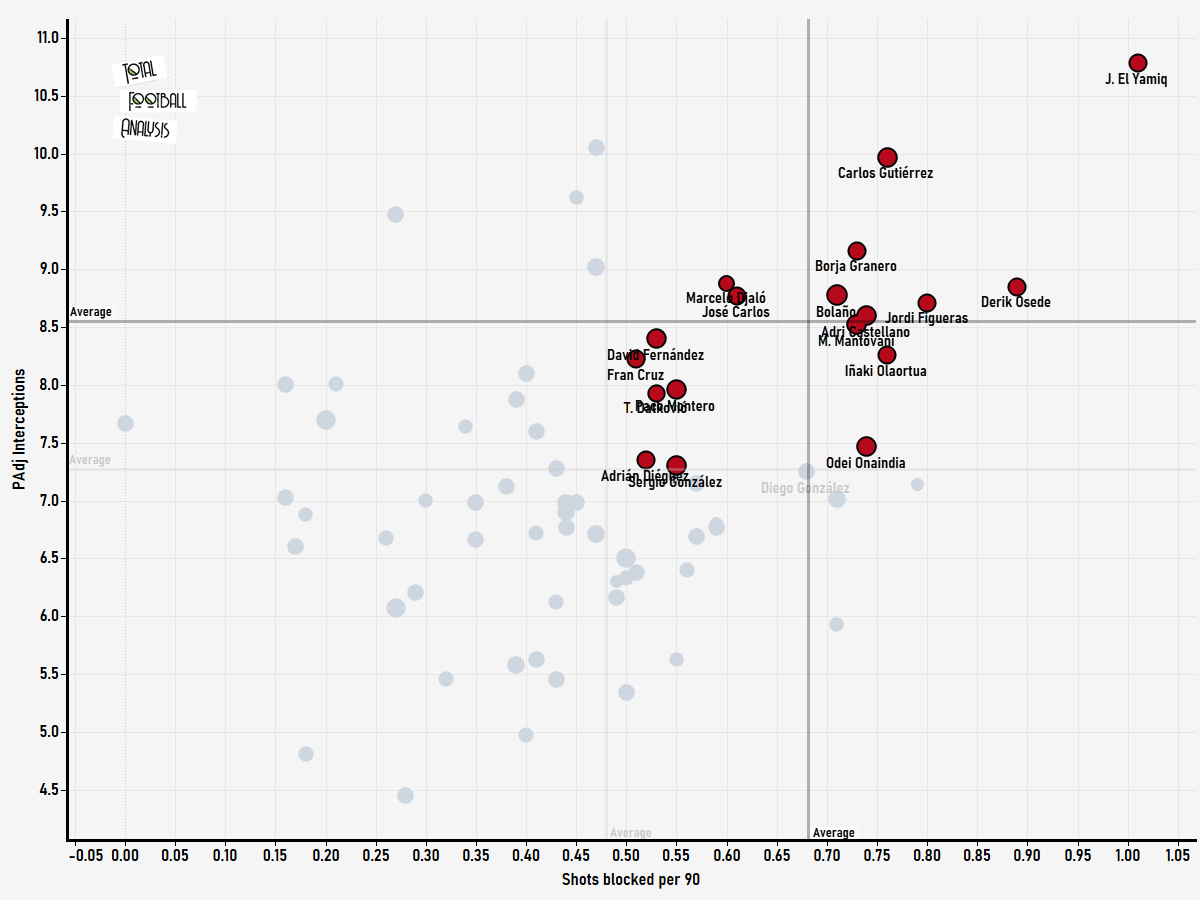 Jumping into the next criteria we can find a lot of players making it to the elite list when compared to the previous scatter plot. Also one should notice the fact that these are a new set of players in the elite list and four players from the previous section haven’t made it this time. Beginning with Jawad El Yamiq who clearly seems to be a standout player on an average block 1.01 shots per 90 and intercepts 10.78 passes per 90. The second-highest interception is made by Carlos Gutiérrez who intercepts as much as 9.97 passes per 90 and blocks 0.76 shots per 90.

Borja Granera has the next highest interceptions per 90 (9.16) and when it comes to shots blocked per 90, he stands at a value of 0.73. Derik Osede stands second highest when it comes to the number of shots blocked per 90 (0.89) and intercepts as much as 8.85 passes per 90. Bolano, Jordi Figueras, and Adri Castellano are almost clustered together in the scatter plot, with their shots blocker per 90 value being 0.71, 0.80, and 0.74 respectively while they intercept as much as 8.78, 8.85, and 8.71 passes respectively.

Upon getting a good overview of the players defending abilities, we will now try to look at their passing and progression abilities. Modern football demands a defender who not only defends well but is also confident when on the ball and is capable of influencing the teams to attack through some vital passes. Keeping this in mind, we will now look at the centre-backs who make more progressive passes per 90 than lateral passes.

In the below scatter plot, we have look at the progressive passes and their accuracy while the radius of each circle indicates smart passes by the player per 90. 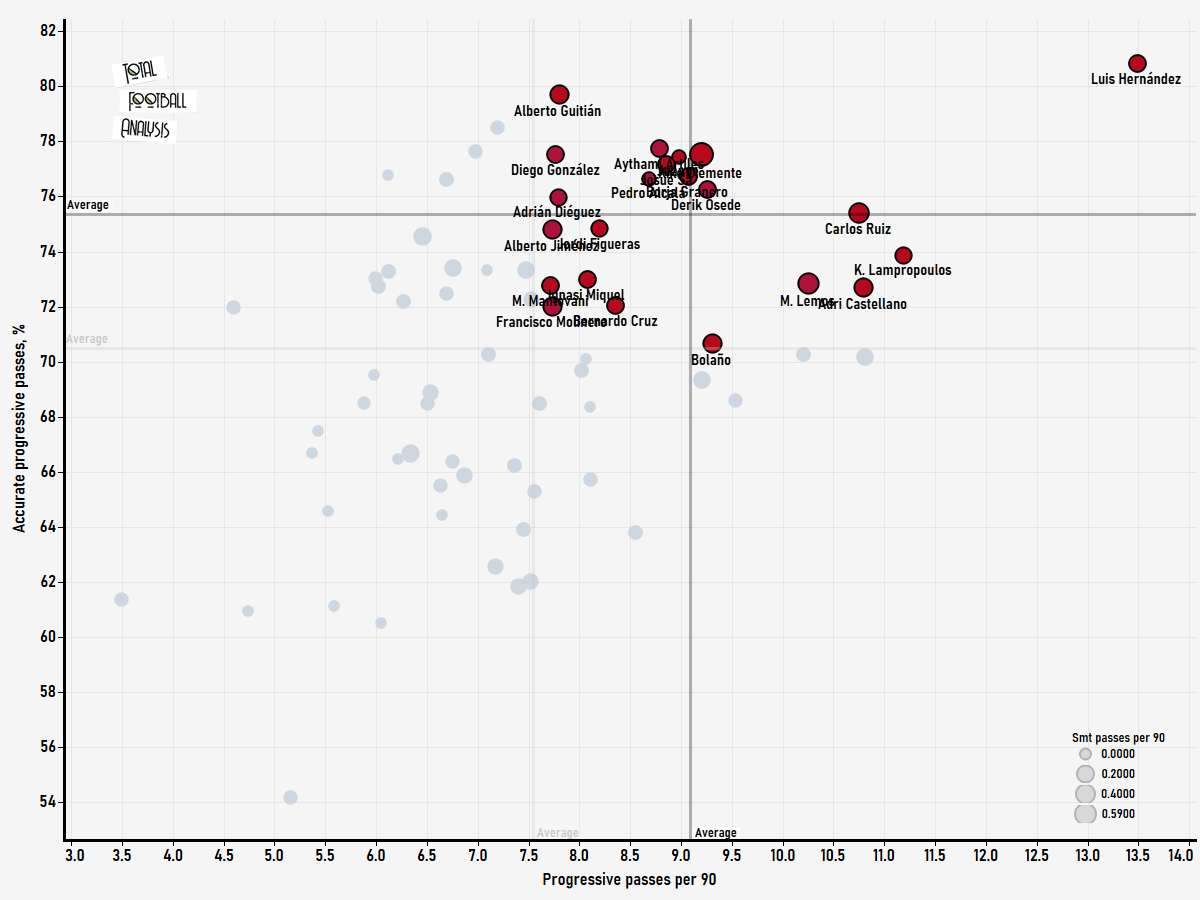 Luis Hernandez is a surprise inclusion to our list and stands out in this particular section. He makes as much as 13.49 progressive passes per 90 with very good accuracy of 80.83%. He also makes 0.10 smart passes per 90. The remaining three are Carlos Ruiz, Kike Clemente, and Osede who have successfully made it to the elite list and are only a few values away from the average. Ruiz who makes the second-highest number of progressive passes(10.75) among these four has an on average accuracy rate of 75.41% and also makes 0.18 smart passes per 90.

Osede and Clemente are very nearby situated and tend to share a similar style of progression. Osede makes as much as 9.26 progressive passes per 90 with a success rate of 76.25% while the number of smart passes he makes is quite less with a value of 0.08 per 90. On the other hand, Clemente also makes a similar number of progressive passes as Osesde with a value of 9.20 but has a higher success rate of 77.25%. The number smart passes he makes per 90 is something that has to be noted as it tends to be the highest among the remaining with a value of 0.59.

Before jumping into our next final part of our data analysis, by now we should have noticed that there’s no particular trend in these important attributes, meaning there is no a particular defender who stands out in every metric, but rather there are different players who excel in different attributes of the game. This although makes our conclusion a bit hard, this is something very interesting to look at. From an analyst point of view, it really means this league isn’t dominated by a single player, and especially it would become a huge base to scout from due to the different versatility these players hold. Sticking on to the motto on why we started to write this data analysis we can still spot players like Marcelo Djalo, Osede, Ruiz who have been a few of the players who have been on the best performers in at least two out of three of our sections so far.

In this final section of the analysis, we would try to analyse the attacking nature of the centre-backs. We wouldn’t look at the goals they scored, because that depends on the team’s strategy during corners and set-pieces, so instead, we will try to look at their influence in the attacking third with their passes. 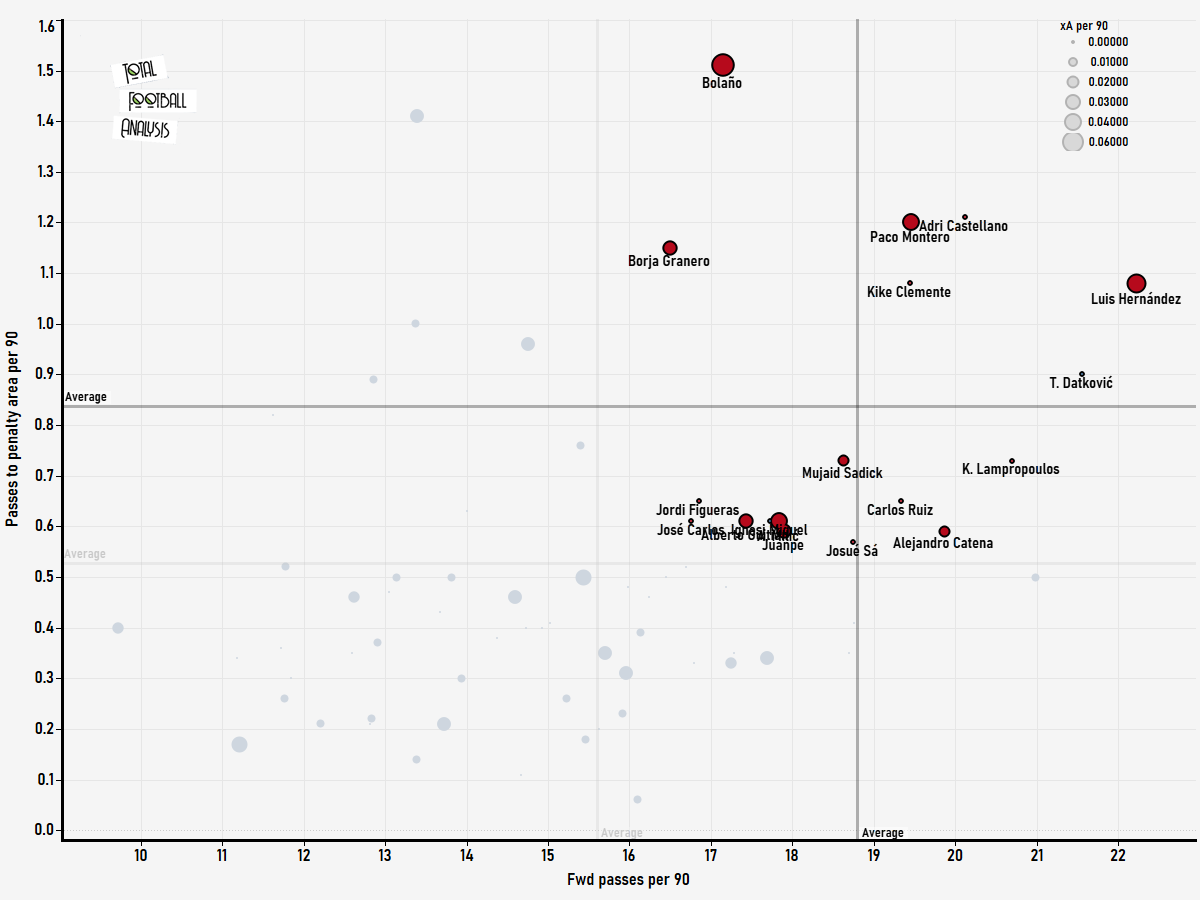 Looking at the scatter plot, we can clearly understand what the axes are and the radius of each circle indicates the expected assist by the player per 90. Five players have made it to the elite list among which Clemente and Hernandez are the two names that sound familiar to us. Like our previous section, here also Hernandez leads the pack in the number of forward passes per 90 with a value of 22.23 while his number of passes into the penalty area per 90 stands at a value of 1.08 per 90 whereas his expected assist value is quite high when compared to the rest with a value of 0.04.

On analysing these statistics of the centre-backs, it really is difficult to conclude the best as they all have their own departments to excel in, but purely judging based on data, the standout players from our analysis would be Hernandez, Clemente, Bolano, Osede, and Ruiz. I would conclude stating these player has the players to look out as these players have been consistent throughout our analysis. Even if they hadn’t made it to the elite category in every single section, they still have made it to the best performer category. The main reason would be for them to be in the list would because of their reliability and consistency in various metrics which helps them to be one of the best centre-backs in the Segunda División.

I would conclude this data analysis by stating that the above-mentioned players are the ones to look out for and also by stating that Segunda División is a league with a bunch of talent and players with a promising future. Definitely these players have the potential to compete in the top European leagues such as Serie A, Ligue 1, etc if moulded properly. 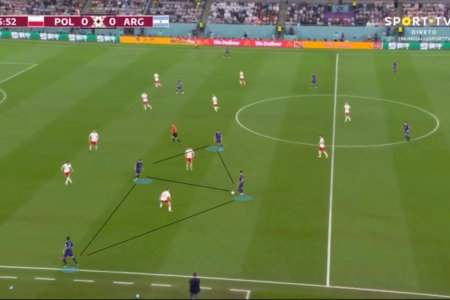 FIFA World Cup 2022: Why stopping Depay and Messi will be key for both The Netherlands and Argentina in this huge quarter-final clash – tactical preview

One of the most awaited quarter-finals in this World Cup is The Netherlands versus Argentina, where the Dutch will be […]