Following Spain’s disappointing exit at the 2018 World Cup, Gerard Piqué confirmed his international retirement and wanted to focus on ending his career at Barcelona. His long-time national centre-back partner, Sergio Ramos, will be 35 when the delayed European Championships come around next year, leaving suggestions that this will be the last major tournament for the captain. As a result, the Euros are not only an important competition for Spanish football as whole, but for Ramos also.

However, Spain have struggled to fill the Piqué void following his retirement – finding the perfect partner for Ramos has proved troublesome. With youngsters Pau Torres and Eric García being called up to the squad for this month’s internationals, we can conclude that Luis Enrique is still undecided on who should partner the Real Madrid legend at the Euros next summer. In this data analysis, I will consider the possible candidates and use statistics to conclude who should be playing next to Ramos at the Euros next year.

Raúl Albiol (34) has made 56 appearances for La Furia Roja since 2007, but just three at major tournaments. He played 36 times in La Liga for Villarreal last season.

Iñigo Martínez (29) has started five times for Spain since the summer of 2018, though he was not included in the squad to face Ukraine and Germany this month.

Diego Llorente (27) has improved every season since joining Real Sociedad in 2017 and himself has five international caps.

Nacho Fernández (30) made just six league appearances in an injury stricken 2019/20 campaign. However, with 22 Spain caps to his name, his quality cannot be denied.

Marc Bartra (29) played 30 times for Real Betis last season and was busy at the back for a lot of it. He has 14 Spain caps but has not started a game for them subsequent to the 2018 World Cup exit.

Mario Hermoso (25) made his Spain debut in November 2018 and has played four further matches for them since. He played in just under half of Atlético Madrid’s league matches last season.

Pau Torres (23) impressed for Villarreal last season, playing 34 times. He has just one international cap but was called up to the squad for the September fixtures.

Unai Núñez (23) has just nine international minutes to his name, but made a strong finish to last season with Athletic Bilbao.

Eric García (19) enjoyed a breakout season for Manchester City least season and was called up to the September squad by Enrique.

What is Enrique looking for? 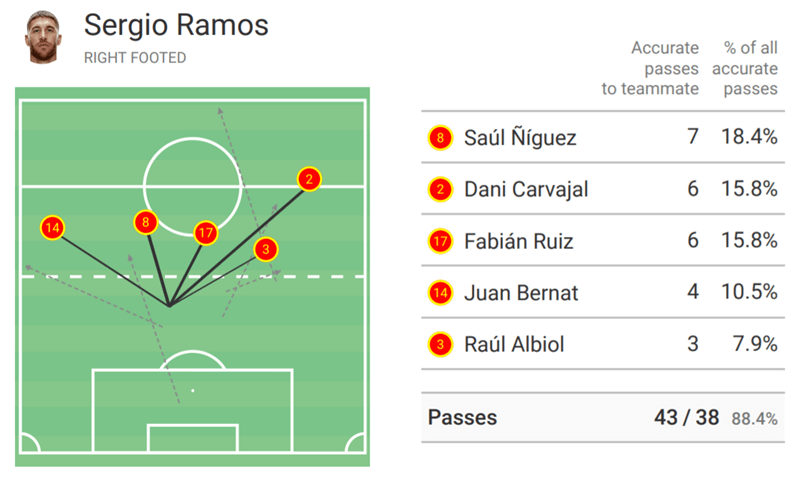 Spain likes to press high and intensely, as displayed by their PPDA of just 7.6. However, should the opposition beat the press, centre-backs need to be mentally and physically quick to combat a counter-attack. They should be prepared to attack loose ball duels and engage in aerial duels should the ball come over the top. Intercepting the football also will nullify any counter-attacks. In his last five international matches, Ramos made 11 interceptions – the second most of any Spain player – and also engaged in 23 aerial and loose ball duels, more than any other defender. Spain’s final third recovery map below exemplifies their desire to win the ball back high, but placing it next to the aerial duel map displays the need for centre-backs to be alert should the opposition evade the press.

Finally, during rare periods of sustained pressure, it is important the centre-halves retain focus and shape. It is key for them to execute defensive duels and recover possession as much as possible, but it is the timing of and success at which they do so which determines how well they defend. Ramos won 67% of his defensive duels in Spain’s last five matches, and Spain’s defensive-third duel map is displayed below. With three centre-backs at the top of the list for duels, we can conclude their importance for the central defender.

For Enrique, centre-backs are not only there to defend, but are key in building up play and also in transition. With an awareness of this, I will now begin to compare data from the domestic campaigns of our candidates from last season. I will map them against Ramos also in order to provide a transparent comparison.

It is important for Spain’s centre-backs to keep the ball effectively. They build their attacks from the back and seek to dominate possession in matches. By mapping their accurate passes per 90 against their losses per 90, we can evaluate how well our candidates keep the ball.

More impressive however are the figures posted by García of Manchester City. Of the eleven men, he averaged the most accurate passes per 90 in the league last season with 69.57 and the least losses per 90 with 5. Although part of this can be explained by City’s style of play, the figures are brilliant nonetheless. For comparison, in his last five international appearances, Ramos averaged 6.45 losses per 90. García’s passing figures in the Premier League last season are shown below.

Owing to the amount of men they commit forward, Spain are occasionally liable to counter-attacks. It is the job of the centre-halves to prevent these counter-attacks from manifesting and ultimately ensure defensive solidity. It is likely that the centre-backs will be faced with loose ball duels and aerial duels when they are threatened with counter-attacks, so the next diagram compares the success of the candidates in these areas.

Quickly regaining possession can form the basis of a counter-attack. While Spain don’t often play counter-attacking football, counter-attacks can still be a force going forward, especially when you consider the quality Spain possesses in attack. By mapping interceptions against passes to the final third, we can consider how well our candidates perform in transition.

Nacho averaged 6.69 interceptions per 90 in La Liga last season. While he only made 4.78 accurate passes into the final third per 90, his overall pass accuracy for the season was 86.9%, showing his ability still to keep the football.

Llorente and Bartra are the only candidates below average in both aspects: Llorente with 5.3 accurate passes to the final third and 4.44 interceptions per 90 and Bartra with 5.32 and 5.22 respectively.

Most importantly, centre-halves must be confident defenders, with an ability to hinder opposing attacking threats. By mapping the recovery figures of our candidates against their successful defensive duels, we can conclude which men are more defensively sound and can stop the opposition from developing their attacks.

Marc Bartra is the standout man here, he embarked upon the sixth most defensive duels in La Liga last season, and his success rate of 68.5% means that he won 4.53 defensive duels per 90. He also recovered possession 11.53 times per 90 last season, this is more than Ramos’ figure of 10.62, and the only men in our dataset who beat it are Núñez (11.84) and Martínez (11.9). Martínez is also above average in defensive duels won per 90 with 3.71, showing his defensive capabilities.

The other man who posted figures above average in both is Torres. Despite attempting only 4.97 defensive duels per 90 (the 39th most of all La Liga defenders), his 75.57% success rate ensured he won 3.95 defensive duels per 90 last season. He also averaged 10.3 recoveries per 90, which is a solid figure. A lot of his duels last season were won out wide as he travelled there to cover high full-backs. This is something he would have to do at Spain also, and no doubt something that Enrique has looked at.

Upon watching García, one is not struck with a sense of defensive certainty. With just 3.04 defensive duels won and 7.39 recoveries per 90, the statistics corroborate with our aesthetic assumptions. Mario Hermoso won the least defensive duels per 90 of our candidates with 2.83, and his recovery figures are also sub-par, with 9.59 per 90.

The table below contains the four players with multiple positive mentions from the four factors. The intensity of the colour signifies the ability of the candidate in that area. The darkest red is the highest grade the candidate could achieve, while the lightest is the opposite. It is here that we dismiss Mario Hermoso, Raul Albiol and Diego Llorente. Also, Nacho Fernández and Eric García will be discharged, but if these men perform consistently next season, they should not be completely ruled out.

Martínez made 40 starts for Athletic Bilbao last season, and despite finishing eleventh, just four teams conceded less goals than them. While he is not a ball player as such, Martínez has displayed competence on the ball throughout his career and earned seven competitive appearances for the national side. Although he will be 30 when the Euros come around, he is showing no sign of slowing down. His experience will only serve to bolster his impressive personal defensive record, and given a good run in the side next to Ramos, there is no reason why he could not fill the void left by Piqué adequately.

Bartra was incredibly busy defensively in a sub-par Real Betis side last season. He engaged in the 10th most aerial duels and 6th most defensive duels of all La Liga defenders last season, with 5.98 and 6.61 respectively per 90. While Betis did not defend well as a unit last season, it is clear that individually Bartra is up to the defensive standards required at the top level. Although he made his international debut back in 2013, Bartra has only made four competitive appearances for Spain. He has proved that he is a versatile defender and the data presented paints him as a solid candidate to partner Sergio Ramos next summer.

In his first ever La Liga season, Torres impressed all onlookers and ultimately earned a call-up to the national team for the friendlies this autumn. He has just 29 international minutes under his belt, but there is no doubt that he is up to the standard required. Having played over 3000 league minutes, last season was a huge step in his development. While he is already an adept passer of the football – making the 11th most passes of all La Liga defenders last season (with an accuracy of 87.24%) – Torres still has some work to do if he wants to become a defensive stopper of Piqué’s calibre. He has many years to develop this aspect of his game however, and another season of top flight European football would undeniably prepare him for a major tournament call-up. With Ramos ageing also, Torres has the potential to be not just a short-term Piqué replacement for the Euros, but a long-term solution for Spain when Ramos too retires.

Last season was a great season for Núñez’s development. His 26 appearances for Athletic Bilbao were impressive, and his high recovery figures (11.84 per 90) attested to the desire with which he plays the game. Despite the occasional defensive struggle, Núñez is a solid defender with excellent ball retention capabilities. With a more experienced head next to him, there is no question that Núñez has the quality to play at an international level, especially in a Spain side keen to keep the ball and structure attacks from the back. However, Núñez appears more of a long-term option. He played far less league minutes than the other candidates did last season, and would benefit from more high-level experience before a major tournament call up.

Overall, this analysis showed that Spain have varying centre-half options for next summer’s Euros and beyond. What’s important before a major tournament however is building a partnership. Cases can be made for any of the players I have studied, but the key aspect of defensive success is the cohesion of the unit. Individually, the data showed that Torres, Bartra and Martínez have what it takes to cut it at an international level, but what will be imperative to Enrique is how well these men perform next to Sergio Ramos and in a Spain shirt. Should Enrique desire a more possession-focused option, Torres would be my recommendation. However, if he requires someone with more solid defensive capabilities, both Bartra and Martínez would be feasible options. 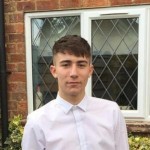 Student of Politics and Economics from the UK. A big Arsenal fan who enjoys writing about and analysing football. Follow my Twitter @ben_rowe4