It is true that the FAWSL has just started and players have played only three matches and some did not even start. However, carrying out a data analysis on the active forwards of the 2020/2021 FAWSL season will give some insight into the actual players’ characteristics based on the existing data and on their recent performances.

Also, with the coming of some world-class forwards like Alex Morgan and Christian Press, and the existence of some other experienced and talented players like Vivianne Miedema, Ellen White, Bethany England, Sam Kerr, Rachel Daly and more, it would be very interesting to know which ones have performed best during the last period.

This will help us know what we can expect from them in the near future. Also, analysing the different aspects of these forwards’ performances would allow us to identify the most significant traits and the less tangible ones of each player.

We will start this analysis by looking at the percentage of shots on target based on the number of opportunities that each player had. This is fundamental for spotting these forwards’ hunger for goals and shooting accuracy as well.

Excellent forwards should make the best out of each opportunity and aim at shooting on target whenever they happen to be positioned in a shooting position. And one of the differences between excellent forwards and less excellent or average ones is the ability to shoot on target more often and to avoid missing a lot of shots in order to increase scoring chances.

In this regard, and as you can see in this domain, some players get more opportunities than others but not all of them exploit these opportunities in a good way.

Except three forwards who get circa one to two opportunities per match, all the other forwards shoot with a percentage that is no less than 45%. And the majority are higher than the average, which is a positive indicator for FAWSL’s forwards.

Sam Kerr heads the list with 61.3% of shots on target, while Lauren James, Brooke Chaplen, Jane Ross, Valérie Gauvin, Rachel Daly, Christen Press and Vivianne Miedema are all above 55%.

The one exception however is Simone Magill who gets only 1.2 opportunities per match and has a shooting on target percentage of 62.2%. And this shows how this player has the skills and determination to shoot on target even when she does not get a lot of opportunities. 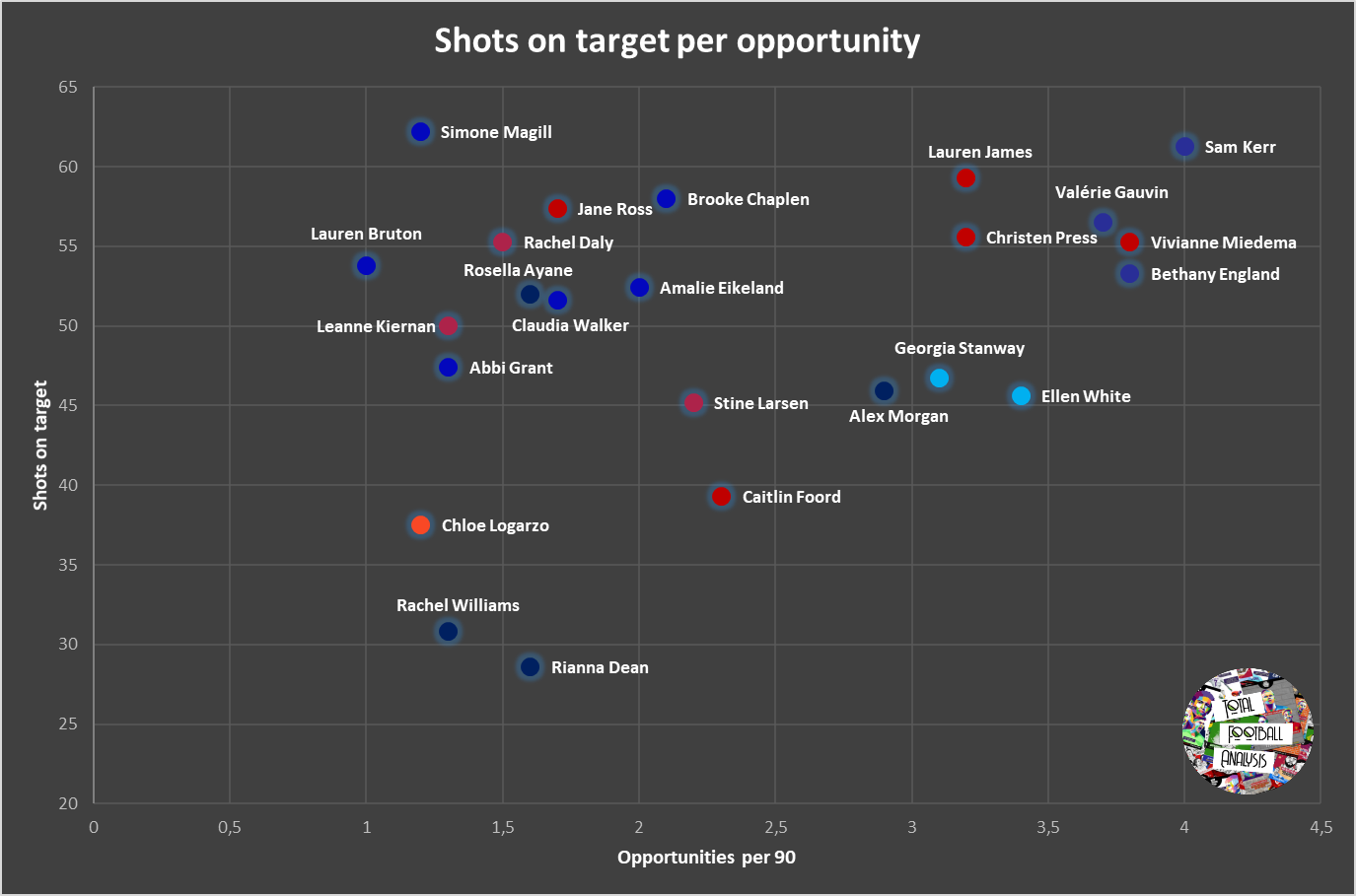 It is also very important to know who are the best goal-scorers in the league by measuring their goal-scoring percentage along with their shooting on target percentage. Through this, it is easier to spot who shoots on target but does not score a lot of goals and who is a really clinical finisher when shooting on target.

Miedema is way above the others with 27.6% in goal-scoring, while Jane Ross, Christen Press, Lauren James and Sam Kerr are just below her. But Ellen White here makes the exception since she is the player who shoots less than the others on target but has the same goal-scoring percentage as them. 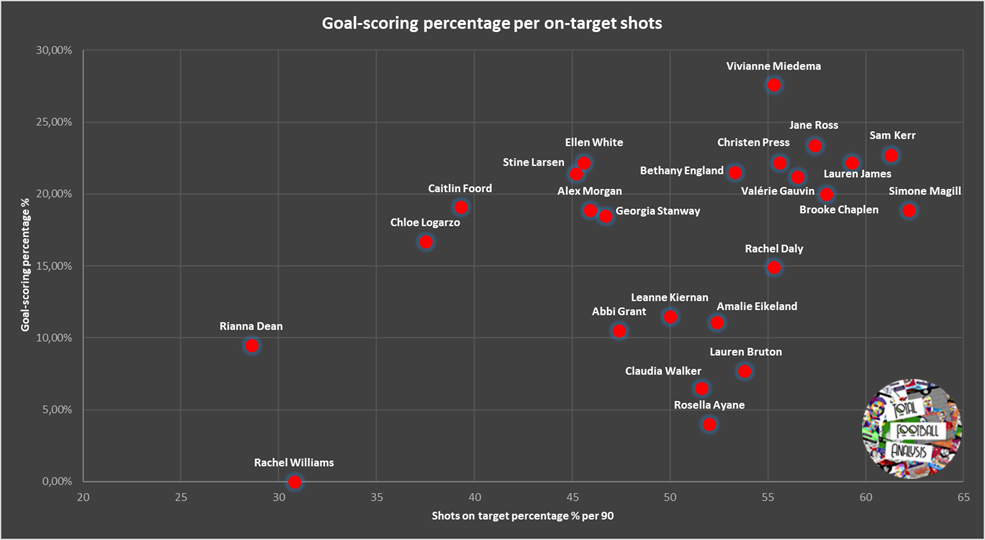 In today’s football, forwards are not only asked to score goals, they are also required to have some passing skills and a sense of teamwork. In games where these forwards are tightly marked for instance, they need to be good with their feet, play as deep-lying forwards and provide the other players who are joining the attack with key passes.

And these kinds of players are smart and usually help their teams with assists if not with goals. In FAWSL, Stine Larsen stands out as the player who provides accurate key passes to the box more than any other forward in the league.

While Bethany England and Lauren James are also very good in making those passes inside the box, Viviane Miedema and especially Alex Morgan are the ones who make smart passes the most while also providing 66.70% of these passes accurately to the penalty area. 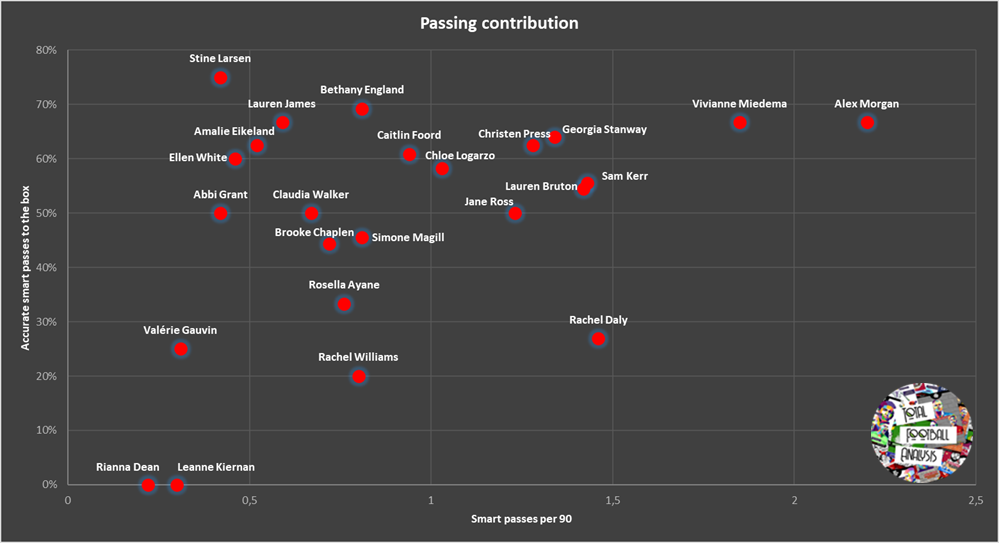 Most teams nowadays rely on dribbling skills and all players, including goalkeepers, need to be capable of doing it competently. For forwards, dribbling helps them in creating gaps for shooting or in escaping past defenders.

And at the same time, forwards find themselves obliged to dribble when they get in one on one situations. This also applies to counter-attacks when they are required to create something out of nothing against one, two or three defenders while waiting for teammates to join the attack.

Therefore, these individual skills are becoming more and more necessary for all forwards and efficiency in doing this role has never been easy since defenders are usually intelligent in reading body-movements and in anticipating the actions as well.

So according to the statistics, Lauren James is by far the best dribbler amongst FAWSL’s forwards with 76.80% dribbling duels won out of 8.1 one on one dribblings per game. Bethany England, Sam Kerr, Caitlin Foord and Christian Press are all excellent in winning dribbling duels too, with 74.50%, 73.90%, 72.80%, and 72.10% respectively. 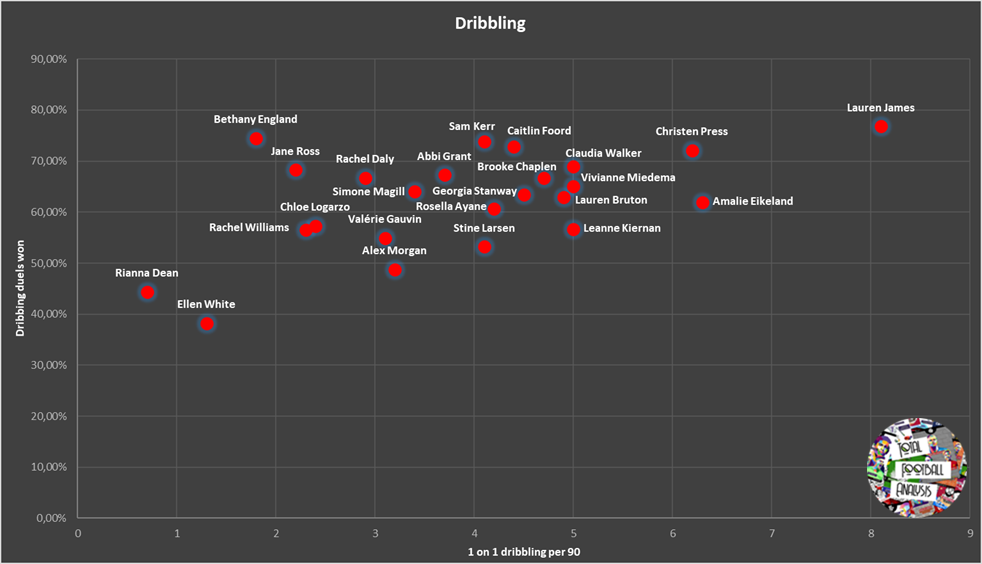 Just like there is a target man role in men’s football, women forwards also play this role. They can serve as a station for winning balls against defenders in the final third before passing to teammates or resorting to individual solutions.

This role obviously requires physical abilities more than anything else. Good timing, intelligent body usage against defenders and tactical awareness are also key characteristics that target women need to have in order to excel in this role.

In fact, not many forwards in FAWSL possess these traits but Sam Kerr stands out as the one who fits this role the most since she is very good in aerial duels with a percentage of 57.50% duels won per 90. Apart from Kerr, only Valérie Gauvin is winning 50% of aerial duels while the other forwards are all below 50%.

And this shows that the majority of teams do not really rely a lot on the physical abilities of forwards and they rather prefer ball possession, short passing and dribbling to break down defences instead of long balls and aerial duels. 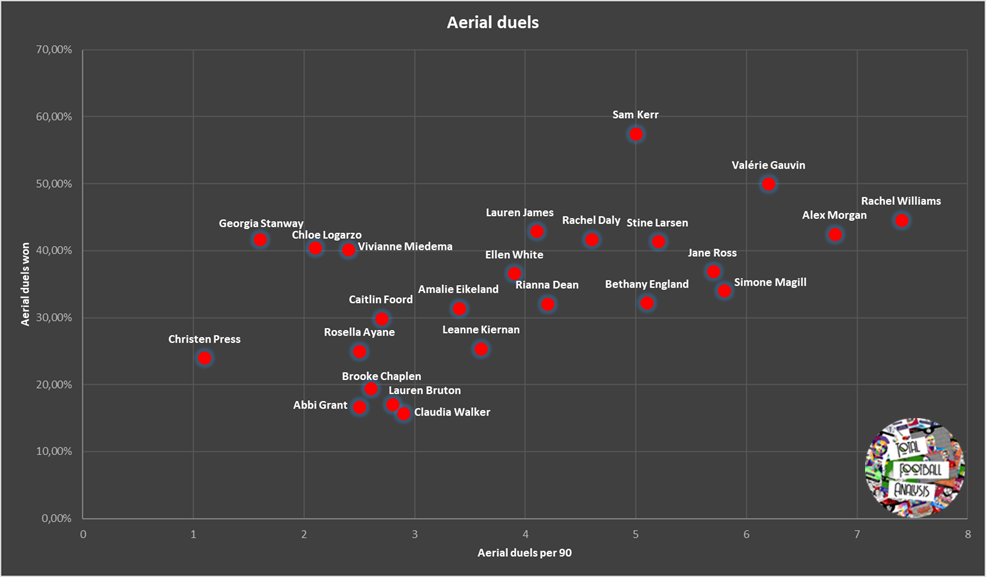 In addition to the previous traits, the defensive side of things should be looked at as well to determine who is efficient in pressing and in helping when the team struggles to keep possession or plays with a low defensive block and chooses to wait for the opponents to attack. In these cases, forwards constitute the first line of defence and are asked to disturb the build-up play of the opposition.

And nowadays, almost all forwards are asked to play this role as well with the exception of some. In the FAWSL, we can see that Alex Morgan is the best in terms of winning defensive duels with a 23.30% percentage even though this data is taken from her NWSL matches.

Simone Magill is also very good at defensive duels with 23% won. Also, Chloe Logarzo, and to a lesser degree, Amalie Eikeland and Georgia Stanway, are the ones who make more interceptions than the other forwards per match. 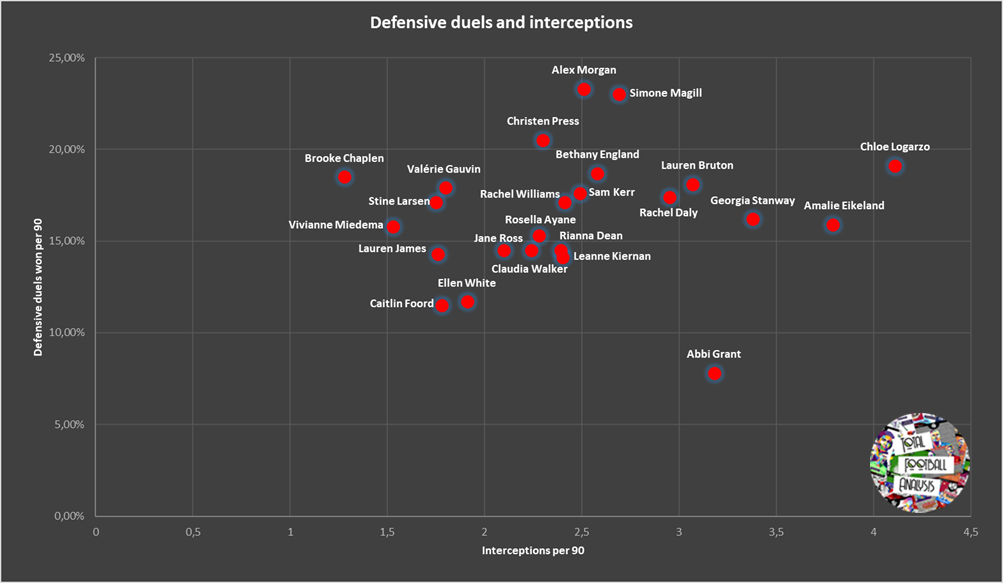 Based on the above data and on players’ performances during this last period, we have shortlisted the players who are excelling in the majority of these statistics to show who are the best performing players in the actual moment.

Scoring 16 goals last season and already four in the 2020/2021 FAWSL season, Vivianne Miedema can be considered as the best forward in FAWSL at the moment since she is the one who scores goals more than anyone else in the league, with an 1.80 xG this season and and average of 2.00 goals per 90.

And this shows how this Dutch forward is vital to Arsenal’s lineup. In addition to scoring goals, we saw earlier that Miedema is also an excellent passer who provides a lot of accurate key passes in the box per match, which is very important when facing defensively tough teams.

Although she was struggling to score at the beginning of this season, Sam Kerr is a key player at Chelsea and she holds some of the best numbers in the league mainly in terms of the number of shots on target and aerial duels won. She scored two goals so far this season but her 1.63 xG per 90 compared to her 1.16 scored goals per match tells us how she really needs to be more consistent in scoring goals.

The American star who has just joined Tottenham is also one of the forwards who could do very well this season since she has skills, vision, key passes as we saw above, defensive contribution and ability to finish the action in an appropriate way. Therefore, we expect to see a lot of goals from her this season even though she will need some time to adapt to her new team’s tactics as well as her new roles.

Forwards who can be surprisingly excellent this season

This year could be the year of breakthrough for Lauren James since she has proved her talent recently. And if she continues to perform in a good way and exploit her physical strength in the best possible way, she can improve her goalscoring stats.

She can also become a much more fundamental player at Manchester United despite the arrival of Christen Press who can also help her with experience. James is currently the forward who dribbles the most in the league and with success, and she also has excellent passing and shooting stats.

Even though she was not getting enough playing time in the last few games, this experienced forward knows how to find the net and how to get the best out of opportunities in the penalty area. It is true that she is not as powerful as she used to be in 2017/2018.

Yet, she can still be a clinical finisher for Manchester City this season since the team doesn’t have many other options up front except her and Georgia Stanway who has switched to play on the left wing recently.

According to her recent excellent form, Magill is becoming a very useful forward for Everton this season since she can finish games and win points for her team by scoring and providing key passes. She is a player who shoots on target so often even when she doesn’t get a lot of opportunities and passes. All that is needed now is consistency in goal-scoring to become a clinical finisher for her team and a more valuable player.

In fact, Magill is also very important to Everton defensively since she makes a lot of interceptions and wins a lot of defensive duels per game. And that’s extremely important for her as a forward and for the whole team.

Apart from the mentioned players, many other forwards are playing very well and can become among the best in the league in no time. Names like Bethany England, Georgia Stanway, Stine Larsen, Rachel Daly, Christen Press who is about to start playing with Manchester United, and other young and hot prospects who are still developing their skills are all able to become some of the best in the league if they keep improving and play with determination at all times.

It is also fair to say that FAWSL is now becoming the league with the best performing forwards in Europe and perhaps in the whole world, and the competition between these forwards is starting to become more intense.