The Copa America 2021 went on despite the COVID crisis and the uncertainty around some of the squads as players had tested positive. Argentina didn’t allow this to distract them from their goal and triumphed in the tournament, making Lionel Messi’s dream come true after a 1-0 win over Brazil in the final.

While Emiliano Martínez stole the show with his outstanding performances throughout the competition, there were other players that impressed for their countries and deserve the praise.

Apart from the well-known players that play for the top European teams and that had high expectations placed upon them, there were some surprising displays from players that didn’t waste the opportunity to show their quality.

In this tactical analysis, we are highlighting six players that were among the best performers for their countries by looking at their displays for both club and country and underlying their strengths in the form of scout reports.

We’re starting off with one of Argentina’s defensive gems, Cristian Romero, who helped the team in conceding only a couple of goals in their four games. Martínez wasn’t the only hero in their squad as Romero’s performance in the right centre-back position in their 4-4-2 formation was key for the team both defensively and in attack.

He helped the team in retaining possession and in progressing the ball, averaging 90% pass accuracy. He was also solid defensively, supporting the team with recoveries and rarely losing the ball. This helped the team in executing their tactics well and increase their confidence. Romero won 60% of the defensive duels he was involved in, which stopped their opponents from creating goalscoring opportunities on many occasions. 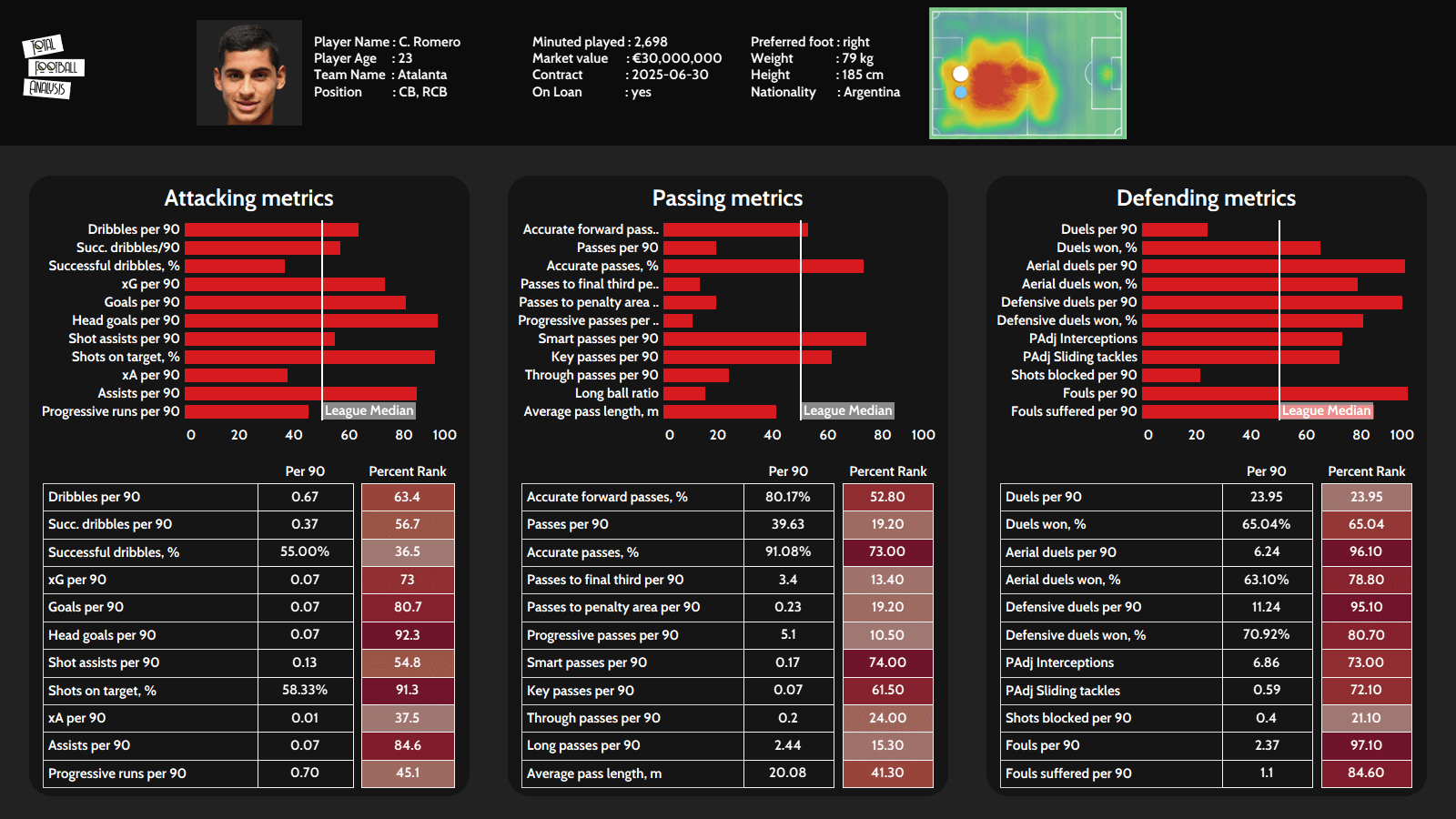 His performance wasn’t a surprise as the 23-year-old impressed for Atalanta last season too. He showed consistency fitting Gian Piero Gasperini’s back three strategy well and providing the team with the needed defensive support in their risky attacking strategy. As shown in his player profile, he excelled in many metrics compared to the average in his position in Serie A. He was more involved in the team’s attacking actions than the average centre-back.

While his involvement in retaining possession and passing wasn’t as impressive, his passing accuracy percentile was much higher than the median in the league, which gives the team more confidence.

As shown, his defensive metrics were outstanding as he was making more PAdj Interceptions per 90 than the average player in this position, which was very important for executing Atalanta’s possession-based approach.

Romero was a loanee at Atalanta and his future is still uncertain as Juventus are yet to decide if they will keep him in their squad for the upcoming 2021/22 season. With their central duo of Giorgio Chiellini and Leonardo Bonucci moving closer to retirement, Massimiliano Allegri needs to consider giving Romero a chance, as he could bring the needed stability without being unnecessarily risky in his actions.

Giorgian De Arrascaeta played as an attacking midfielder for Uruguay and increased their creativity and efficiency in the final third. He wouldn’t only move around the strikers centrally but also go out wide and support the team’s attacking actions with crosses.

His most occupied areas were both half-spaces as he would use his positioning to pressurise the opposition out of possession and also to create goalscoring chances in possession.

The team heavily relied on creating chances through their crossing attempts and he contributed to that perfectly by completing 4.33 crosses per 90 on average. He would also provide a direct threat and shoot 2.16 times on average per game.

Whenever he wasn’t in a good position to shoot, he would support his teammates in their attacking efforts. 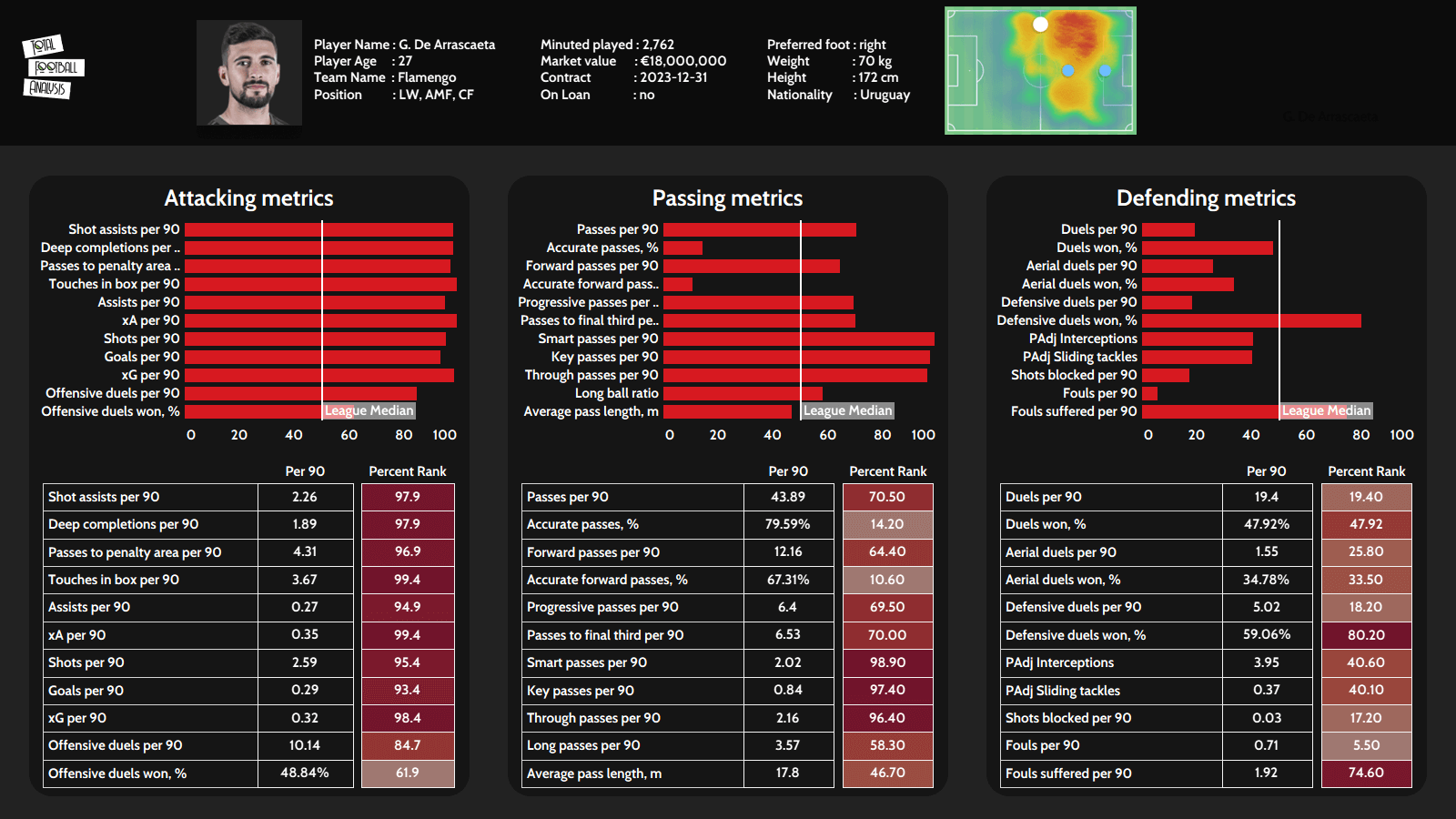 The 27-year-old plays for Flamengo in Brazil, where he’s deployed in a much more versatile role. Last calendar year he was used as a winger, as an attacking midfielder, and even as a centre forward. As his player profile shows, he was very successful in his attacking actions and has increased the team’s creativity levels.

He scored eight goals and assisted nine more last season. He performed better than the league average in each attacking indicator. He had 3.67 touches in the box per 90 on average which helped him in producing 2.26 shots per game and increasing the team’s efficiency in front of the goal.

He reads the game well and was often a target for the opposing players, which he used very smartly to win fouls for his team. He is experienced in taking set-pieces which is very beneficial for Flamengo.

One of the players that impressed the most in the tournament was Luis Díaz who represented Colombia. He was mainly used as a left-winger, although he had to switch to the right-wing on a couple of occasions.

His Copa America journey didn’t start as planned, being benched in Colombia’s first game and earning a red card in the final minutes of their second fixture. The coach though had faith in him and Díaz redeemed himself, finishing the competition with four goals of the team’s total of seven.

He averaged 2.12 shots per 90 with an impressive 61.5% success rate. He managed to create these chances through his control and dribbling abilities, attempting 8.48 dribbles per game, which helped in neutralising his markers.

With his movement up and down the flank, the 24-year-old also actively supported the ball progression, averaging 3.42 progressive runs per 90. The team relied a lot on their counter-attacking actions where his pace and control were very useful. 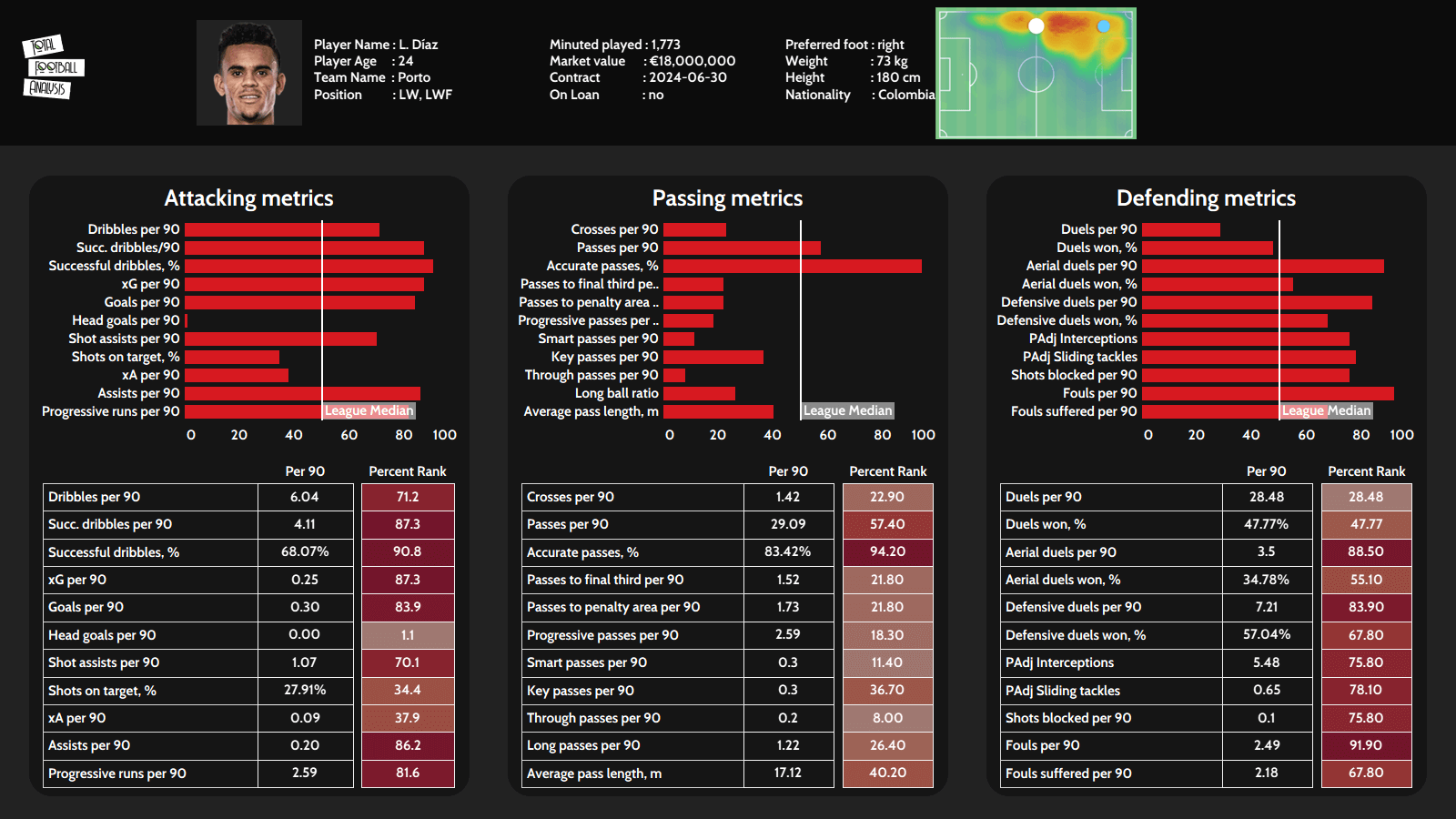 Díaz performed well for his club side Porto too. He had a higher goal contribution compared to the average in his position. As shown in his profile, he had scored and assisted more goals than the league median, while also contributing with accurate passing.

His defensive performance has also been decent as he has supported his team’s actions out of possession more compared to the other wingers in the league. The player has been linked to Roma, but his agent confirmed that there are no official offers yet, despite an increased interest.

Pervis Estupiñán played as a left-back for his country Ecuador and supported the team well in their ball progression and helped them in creating chances with his frequent crossing. He was mainly involved in the actions in the opposition half and averaged 5.87 crosses per 90 which supported the team in their efforts in front of goal.

He used his dribbling abilities to hold on to the ball and progress it through the flanks which increased Ecuador’s efficiency in the final third.

He didn’t neglect his defensive responsibilities though as he was solid in his own half, but his greatest contribution was his involvement in pressing. He averaged 3.91 recoveries in the opposition half per game. 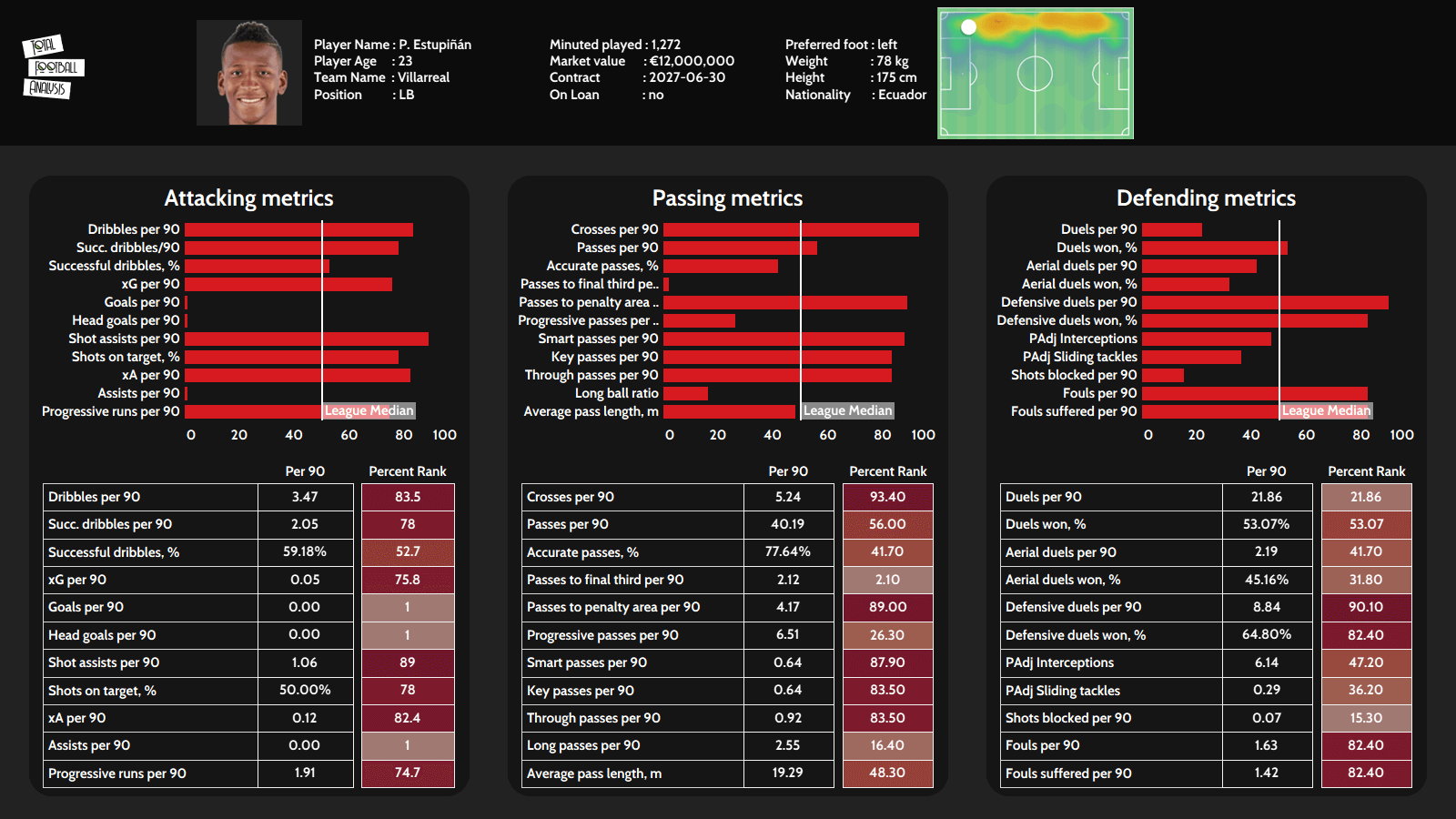 Estupiñán was part of Villarreal’s Europa League title-winning squad, playing a huge role in their journey. As his profile shows, he has contributed to ball progression and to the team’s creative movement up front better than the league median.

He has completed more crosses per 90 than the average player in his position and has also shown more creativity with his smart passes and through balls. As mentioned, his dribbling has helped him in his attacking movement and to complete 1.91 progressive runs per game. That performance has earned him Chelsea‘s interest in signing him.

Matías Viña represented his country Uruguay playing as a left-back. He was key in advancing the ball with his movement up and down the flank. Reaching the final third with an aim to cross the ball has supported the team’s strategy of creating chances through crossing. They averaged 21 crosses per game, where Viña played his part with 3.28 crossing attempts per 90.

He was more valuable defensively as he was rather successful in his challenges. His 8.44 recoveries were very important for the team’s performance during transitions and for them to stop the opposition from creating chances. Uruguay have conceded 6.4 shots on average per game. 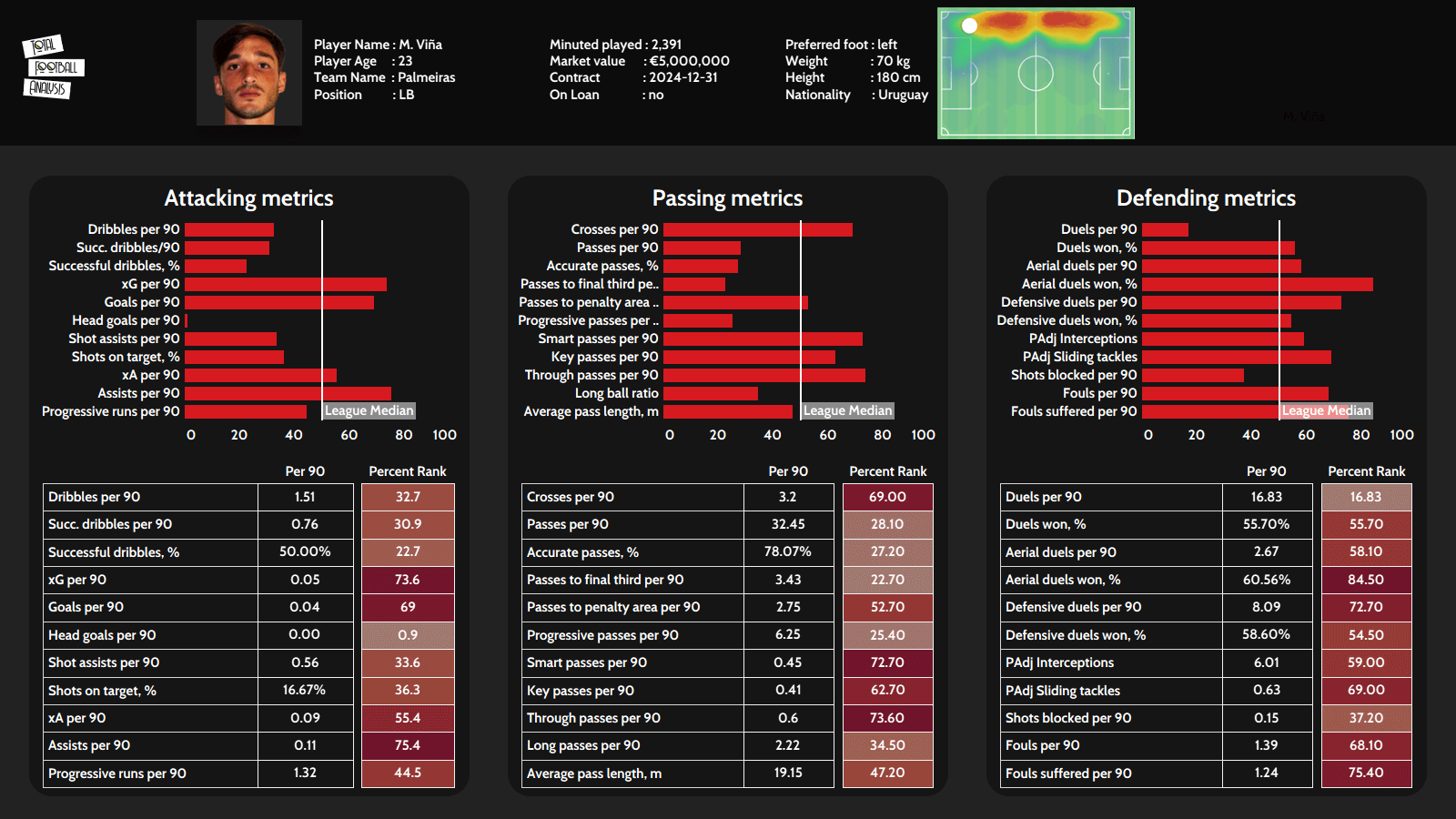 Viña also plays as a LB for his club Palmeiras. The 23-year-old’s defensive performance is underlined by his club data too. As his profile shows, he has been more successful in his defensive challenges than the average player in this position in the league. He has made more PAdj Interceptions on average per 90, while also having better success rates in his defensive and aerial duels.

According to some reports, the player is close to a move to Jose Mourinho’s Roma as they are looking for a replacement for Leonardo Spinazzola who will be out until the end of the year due to an injury.

Wilmar Barrios played in multiple positions for Colombia this summer. He was employed as a defensive midfielder, and as both left and right central midfielder. He was equally important for the team in each position thanks to his passing abilities. Barrios’ support in progressing the ball has been crucial for the team’s attacking actions. He was part of the main passing links in Colombia’s efforts to retain possession and build-up.

His 69.2% success rate in his defensive duels provided the team with more solidity at the back and supported the highly positioned defensive line. He has also added 8.88 recoveries per game. 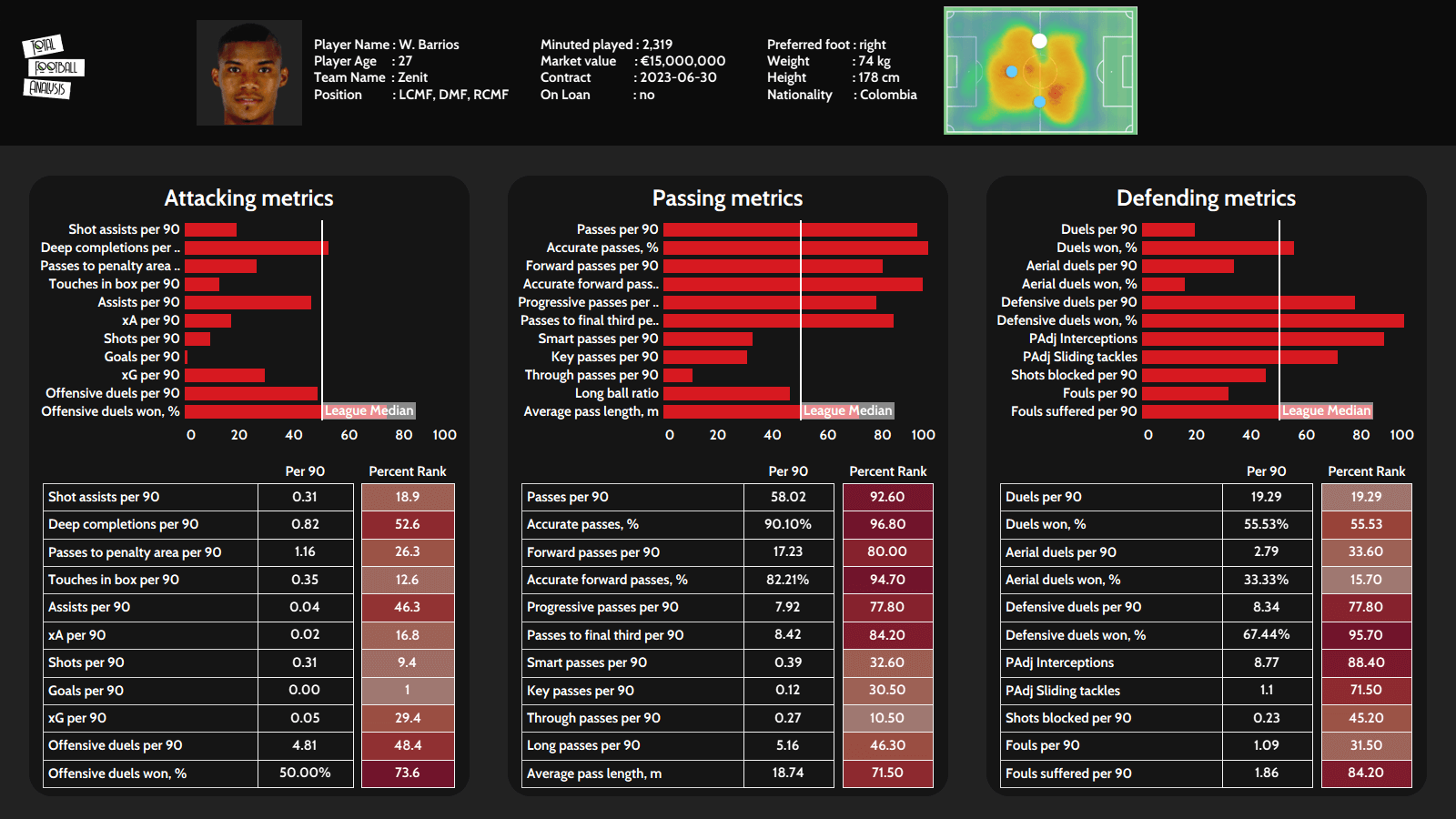 His contribution to the build-up is underlined by his club data too. He has a pivotal role for Zenit St. Petersburg where, as shown in his profile, he excels in passing. With 90.10% pass accuracy and 8.42 passes to the final third per game, he performs better than the average player in his position in the league.

He has also shown consistency in defensive actions, performing better in his challenges than the league median, while also completing 8.77 PAdj Interceptions per 90 in efforts to stop the opposition from creating chances.

These have been just a few of the players that impressed in Copa America 2021. While the best performers were expectedly players like Messi and Neymar, there were others that went unnoticed in the light of their team’s performance. As our analysis showed, some of the above six players have been recognised and included in the Best XI of the tournament, but their influence hasn’t really been talked about.

All of them showed the same consistency both on club and country-level which underlines their qualities even more and should bring them some exposure before the end of the summer transfer window.