Earlier this month I was invited onto Total Football Analysis’ Bundesliga Podcast to help provide insight into who I thought some of the standout performers in the league were from a goalkeeping perspective. I quickly accepted the invitation before realising that I haven’t watched German football for a long time. So, this led to a long process of downloading hours of footage and taking pages of notes.

During this research, I found myself impressed with many of the goalkeepers on display in the league. Borussia Mönchengladbach’s Yann Sommer, Bayern Munich‘s Manuel Neuer and RB Leipzig Péter Gulácsi were naturally the shot-stoppers that impressed me the most. But, there were also goalkeepers that made me ponder. Especially goalkeepers that did so well in certain scenarios, but found themselves struggling in others.

In the last magazine, I attempted to introduce coaches to the concept of integrating futsal style saves into their goalkeeper’s tool belt. Futsal style saves can often be the difference-maker when a goalkeeper is attempting to prevent goals during 1v1 situations or scrambles in the box.

And when I analysed each goalkeeper’s style, I found many of them calling upon these types of saves brilliantly. One goalkeeper who I found myself particularly impressed with was Alexander Schwolow. The SC Freiburg goalkeeper denied opposition players on multiple occasions by utilising split saves, spread saves and block saves.

However, despite his ability to call upon these skills effectively during games, there were certain areas of Schwolow’s game that he can improve, specifically in regards to the techniques pulled from more traditional goalkeeping styles. This tactical analysis will, first, break down the areas of Schwolow’s game that stand out, before providing insight as to how the goalkeeper can improve other aspects of his game.

The split save is a technique used by goalkeepers to reach low driven shots that would otherwise be difficult to reach with their hands. A taller goalkeeper, in particular, might have trouble getting their hands down to stop a shot that is low and close to their body.

This technique is one used by Schwolow regularly to reach shots that are driven low and to his side. We can see an example of the German utilising this technique against Fortuna Düsseldorf. As he is recovering across his net, the shot comes in low to his right. With no time to get his hand down, Schwolow sticks out his right leg, straightening it into the path of the ball. We can see this sequence below. 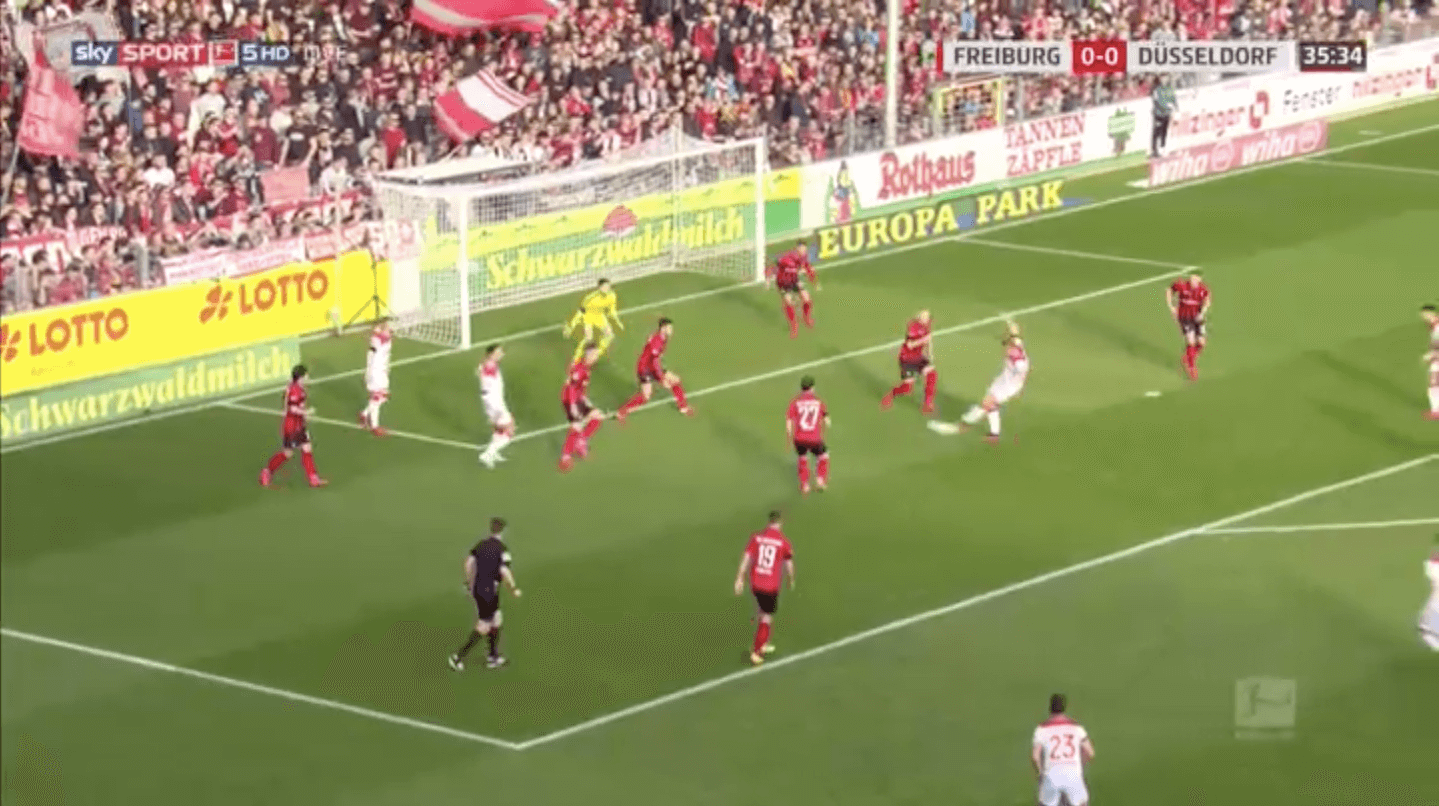 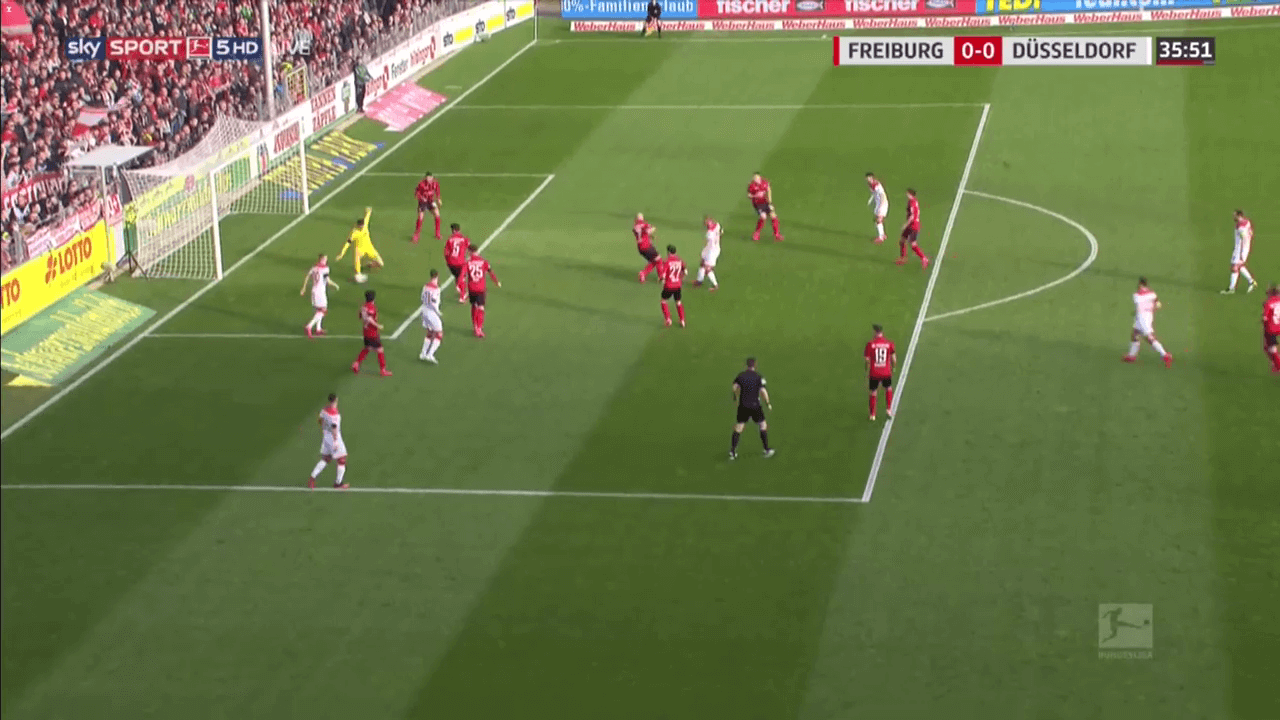 Had Schwolow attempted to reach the ball with his hands, there is a good chance he wouldn’t have made the save.

What makes the utilisation of this save type useful in this scenario is that he is in the process of changing direction. Because he is moving across his goal line, to react to the pass, Schwolow isn’t in a natural set position. And, because the shot was hit in the opposite direction of his movement, the use of the split save was his best chance at saving the shot.

Had the shot been across his body, and into the far side of the net, there is a chance that Schwolow could have stepped into the path of the shot and made a more traditional save.

Another technique that Schwolow, and many other goalkeepers, use is the spread save. The spread save can be used to take away as much of the net’s surface area away from the shooter as possible. Usually called upon in situations where it is clear and obvious that the shooter is taking a shot, the spread save is more of a proactive save type, as opposed to the split save’s reactive nature.

Generally, as a rule of thumb, goalkeepers attempt to be the last player to make a decision when defending a shot. For example, a goalkeeper wouldn’t dive before a shot is taken otherwise the shooter could simply hit the ball in the other direction. This is true during 1v1 scenarios as well, where a goalkeeper will attempt to stay set until the last moment, reacting to either the shooter’s shot or the shooter’s attempt to take the ball around him with a heavy touch.

The spread save, on the other hand, is one of the few scenarios when a goalkeeper will make the first decision. Well, sort of, at least. While the goalkeeper might commit to the spread save before the shot is taken, they will likely only do so when they are confident that a shooter has also committed to taking a shot.

We can see an example of this below. This scenario also came from a match against Fortuna Düsseldorf. After denying Kenan Karaman during a 1v1 scenario, both players quickly react to the ball that spills into the middle of the 18-yard box. Schwolow knows that Karaman is going to shoot, so commits himself to the save, by throwing his entire body into the path of the expected shot. 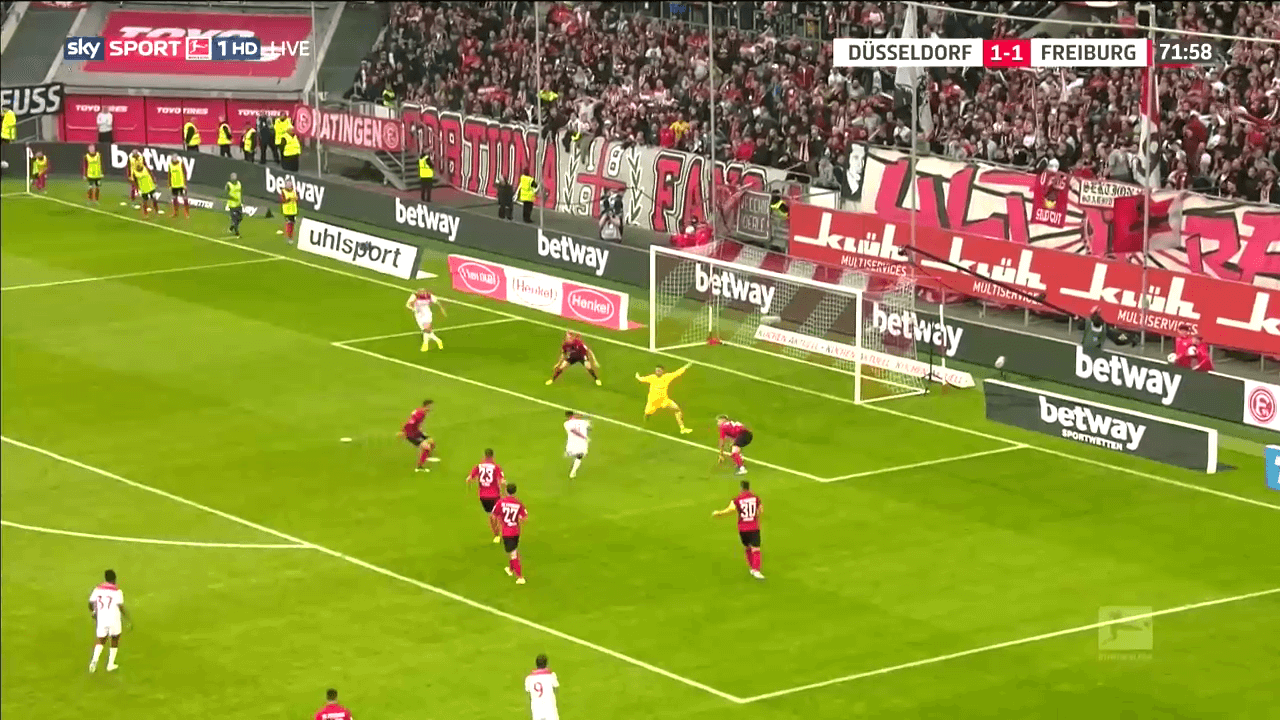 Any attacking-minded player or coach will notice, from the above image, that Karaman still has an opportunity to score from this scenario. And others, who have seen the full highlight, will know that his shot actually misses Schwolow and sails over the crossbar. However, just because the goalkeeper doesn’t actually make a save doesn’t mean that his attempt at making a save isn’t effective.

Having a goalkeeper throw his entire body into the path of a forward’s shot can be very off-putting, and, can in many cases, lead the forward missing the shot completely. This scenario highlights Schwolow’s ability to utilise this technique effectively in a moment of desperation.

The block save, as I stated in my last magazine piece, is a technique utilised by goalkeepers who wish to take away as much of the net’s surface area while maintaining a certain level of mobility. If you look at the spread save in action, you can see that the goalkeeper loses all mobility as soon as both feet leave the group.

If done correctly, the block save allows the goalkeeper to keep both feet on the ground while keeping their surface area large. We can see an example of Schwolow using this technique against TSG 1899 Hoffenheim. With Hoffenheim’s Moanes Dabour barreling down on his goal, Schwolow sets himself in the block save position to take away as much of the net as possible. 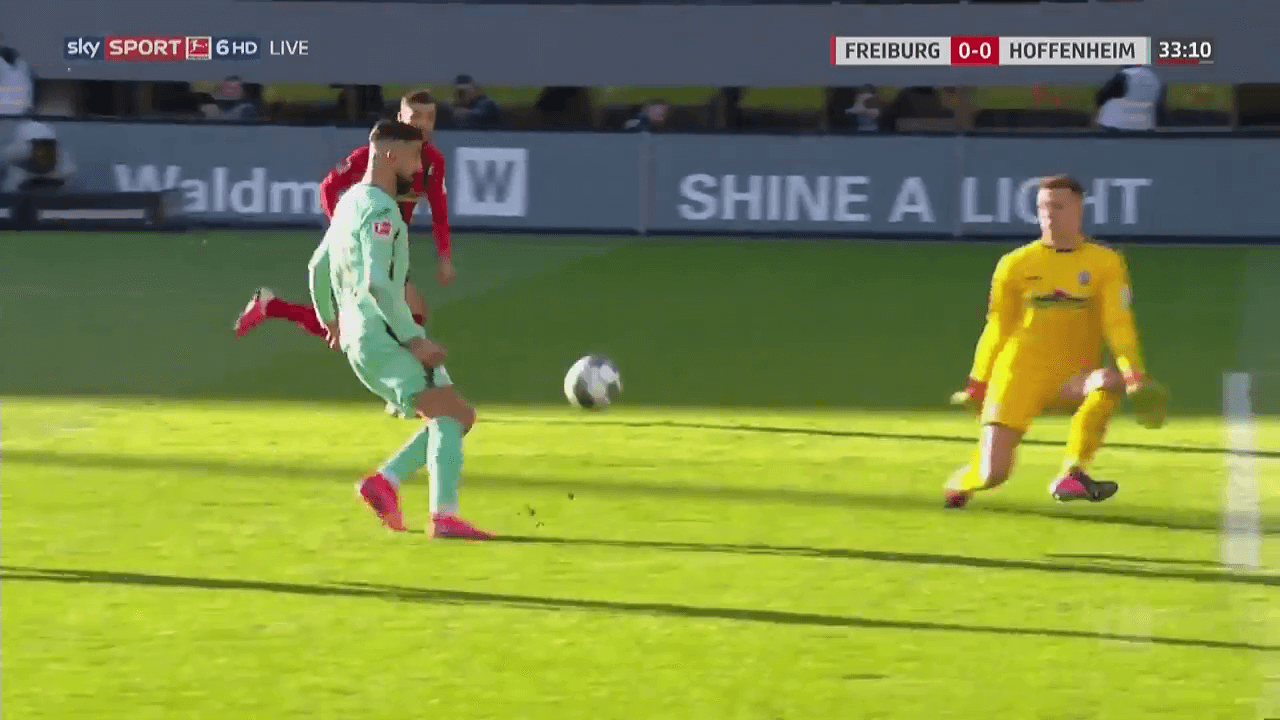 Dabour, realising that there is limited space for him to shoot at, attempts to scoop the ball over the German shot-stopper. However, Schwolow is able to swing his arm up and make a convincing clearance out to the side of his box. 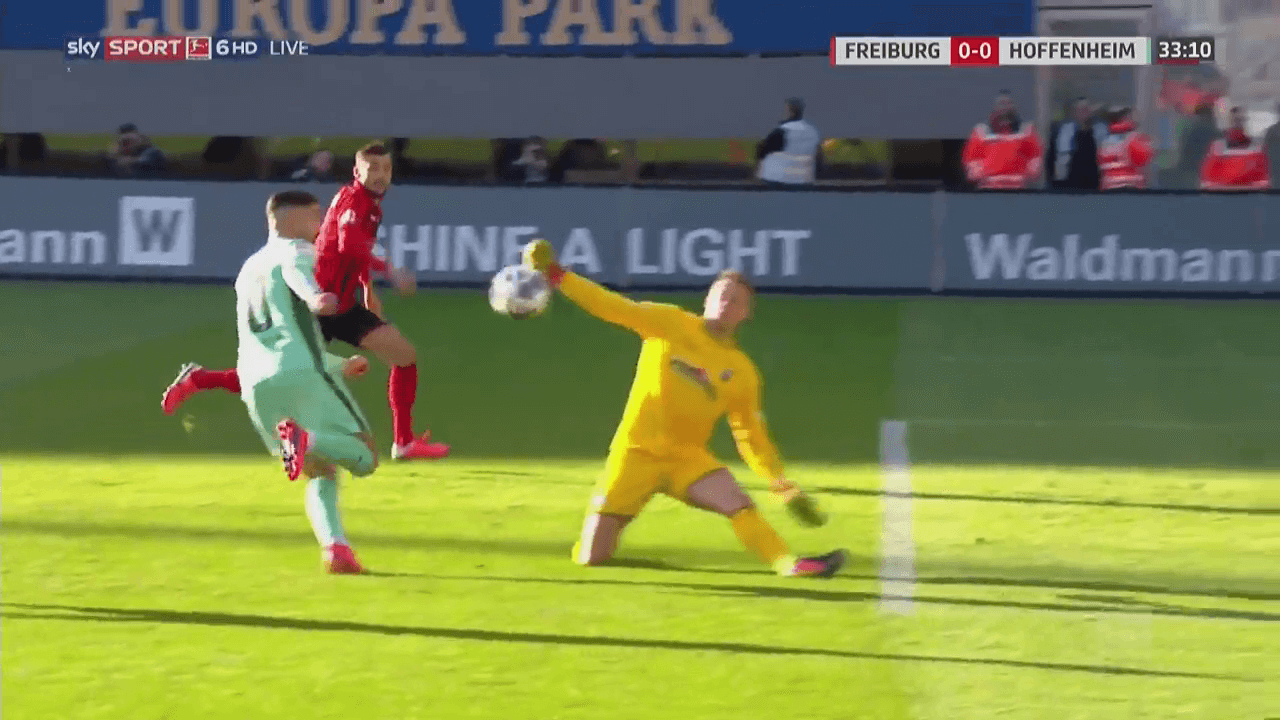 The benefits of this technique over the others we have talked about is the increased mobility. A goalkeeper may call upon this technique when they want to take away as much of the net as possible, but want to stay on their feet in case the attacker takes another touch. This type of save is especially useful when defending the net from an attacker on an angle, who may be forced into attacking the touchline and taking a shot.

We can see from the second screenshot that Schwolow hasn’t kept both feet on the floor, allowing his back knee to drop. This actually takes away mobility from the goalkeeper but could be a result of him reacting to the scooping shot.

The block save is the one technique I saw the least out of from Schwolow, so if you want to know more about it I encourage you to go back and read my piece from the last magazine.

Schwolow clearly has a lot of ability when recalling various futsal skills during matches, many times with high success rates. However, upon reviewing some of the goals Schwolow conceded, there were some obvious areas for improvement.

One of these areas is Schwolow’s ability to prevent the need to make a second save. What I mean by that is, when making a save, does Schwolow have the ability to either a) catch the ball, or b) parry the ball into an area where it is in no threat to his goal. A goalkeeper’s first priority is to make the save, however, reducing the ability for the opposition to capitalise on a rebound should also be a concern for goalkeepers.

When reviewing some of the goals Schwolow conceded this season there were a number of times when opposition players were able to capitalise on rebounded shots. In these instances, Schwolow made the initial save, however, his block pushed the ball back into a dangerous area that could easily be snapped up by a praying attacker.

We can see an example of this from the scenario below. When Freiburg were playing FC Köln, Schwolow made a good save down to his left. However, the goalkeeper was unable to catch the ball, pushing it into the path of Jhon Córdoba, who easily passed the ball into the back of the net. 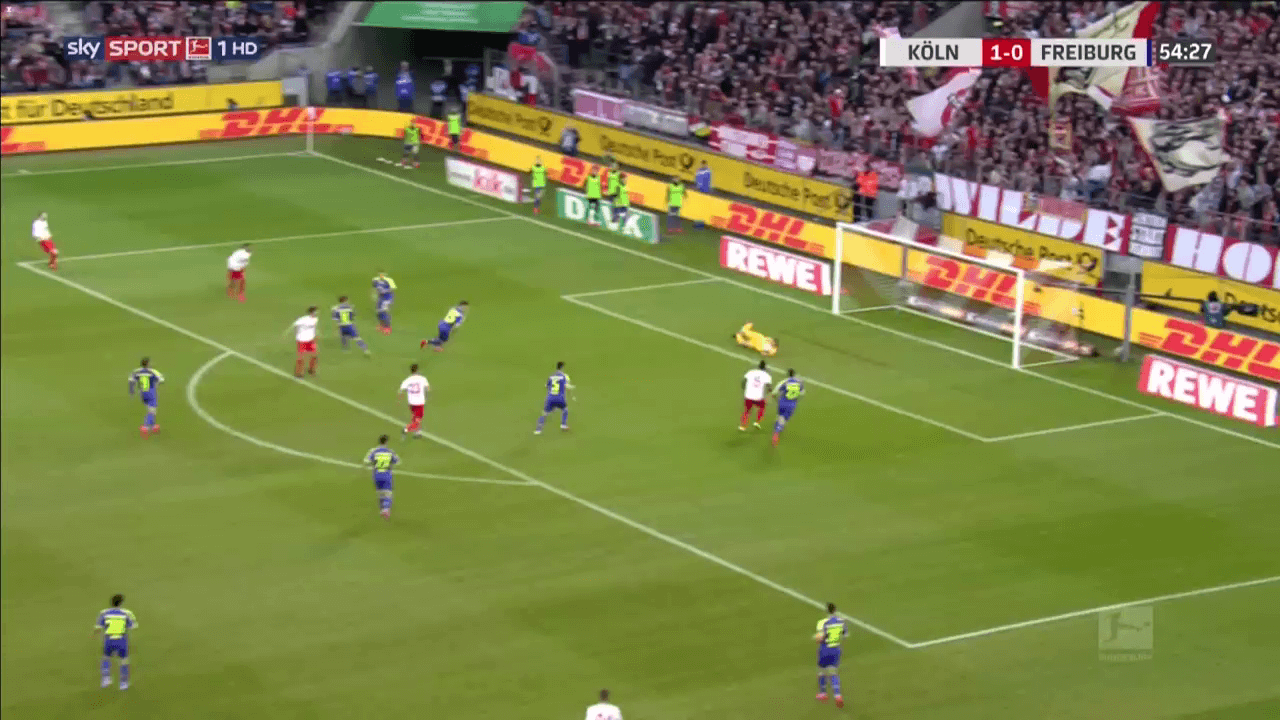 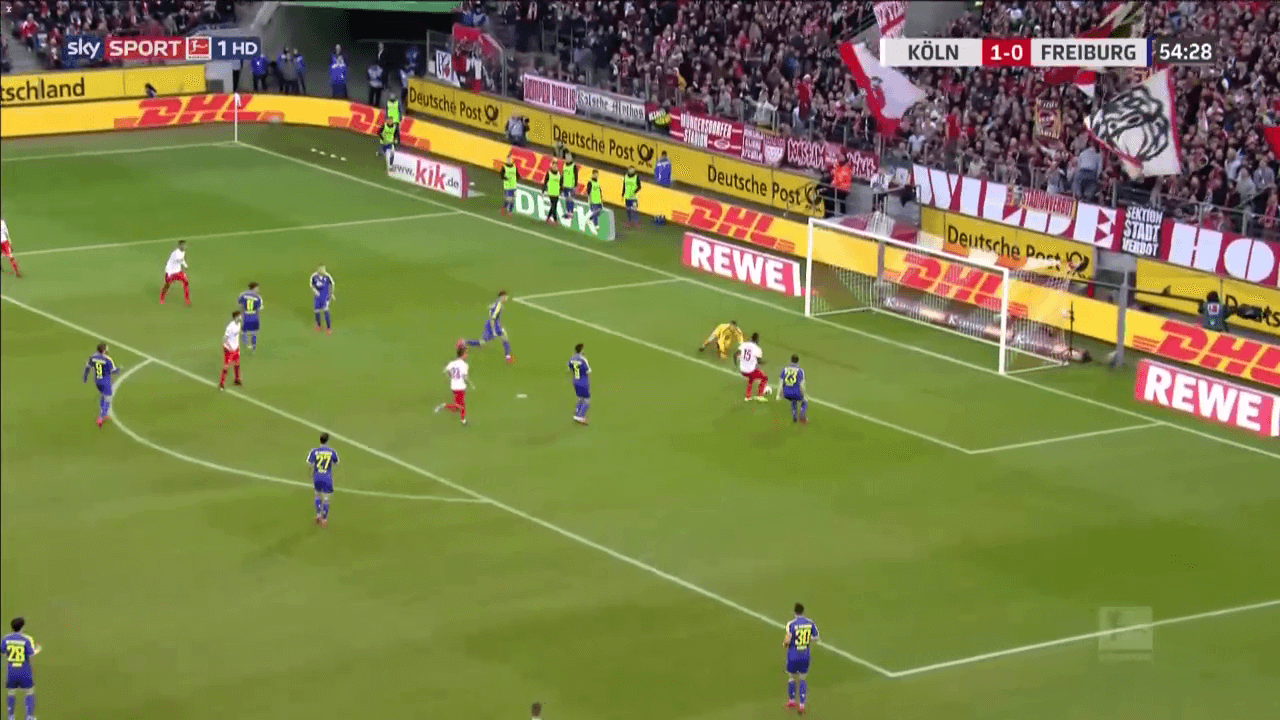 The first save was down to his left, with him collapsing to make the save, instead of pushing out into an extended save across the floor. This limits Schwolow’s ability to push the ball around the post, as his momentum is mostly going down, not out.

As a result, it is vital that he keeps a hold of the ball in this situation. So, what could the goalkeeper do to ensure there was a different outcome? One potential solution is to examine the shape of Schwolow’s hands. It is clear from the path of the ball that he hasn’t gotten his hands fully around the ball, allowing it to roll away from his body.

Another potential solution would be to use his feet in this instance. As we discussed earlier in this analysis, making saves that are low and close to the goalkeeper’s body can often be difficult to make with the hands. That is why we see many modern goalkeepers use their feet in these scenarios. The use of feet allows goalkeepers to quickly make the save while ensuring that the ball is cleared out of the box and to relieve the pressure building within their box.

In the scenario above the distance and speed of the shot should allow Schwolow time to get down and make the save with his hands, however. And while fingers should definitely be pointed at the goalkeeper for his inability to hold the ball, defender Dominique Heintz is also culpable for failing to track his man.

A goal scored by SC Paderborn 07’s Christopher Antwi-Adjei during Freiburg’s 2-0 loss against the side also highlights Schwolow’s inconsistencies at making saves that are low and close to his body. In this scenario, questions can also be asked of Schwolow’s decision making.

So, while Schwolow has shown in many circumstances that he has the ability to pull off some incredible saves utilising different techniques, he has also shown that he has made some costly decisions in the past.