As we all know now, the UEFA Euros 2020 is moved one year back and will take place in 2021. Considering this, we will have to wait one more year until we get to see one of the most interesting tournaments in the world of football. 2016 it was Portugal who won the tournament which took place in France. The team around the superstar Cristiano Ronaldo surely didn’t show spectacular performances but that doesn’t matter as, in the end, they won the tournament.

They were in the group with Iceland, Hungary and Austria. Before the Euros 2016 started, the Austrian national team were for some people one of the secret favourites to win this tournament and, in Austria itself, the people also thought that this European championship could be something big.

However, the team of the Swiss head coach Marcel Koller drew against Portugal and lost to Iceland and Hungary what means they finished in the fourth place and got knocked out. One year after the tournament, they didn’t expire the contract of Koller as they would just do so if Austria were able to qualify for the World Cup 2018 in Russia.

In this tactical analysis in the form of a scout report, we’ll focus on the most important points which Foda changed since he took over the position as a head coach of Koller.

Adjusting to the trends of the Austrian Bundesliga

Austria had a 6.88 PPDA which was the lowest (passes per defensive actions) of all teams who were part of the European Qualifiers. They had the 13th highest value for average possession (59.6%), an above-average value for passes per minute with 15.3 and were the team with the third-highest value of challenge intensity (duels, tackles and interceptions per minute of opposition possession) behind Italy and Switzerland with 6.9. Of course, these are just numbers for the average values per 90 minutes for Austria in their 10 games against the other teams of group G, but still, you can clearly see a certain idea how Foda wants to play football.

Also, you need to keep in mind that with Poland, Israel, Slovenia, North Macedonia and Latvia they had not an outstandingly hard group. Anyways, they were able to get 19 points out of their 10 games and due to that successfully qualified for the Euros 2020.

The stats which I mentioned already above tell that Foda wants to play an active and dominant style of football. In this tactical analysis in the form of a scout report, we won’t look detailed at the tactics and the principles of the German head coach, but I’ll talk about three points which he does different compared to Koller and the first point are the basic tactics.

Under Koller, the team also wanted to show entertaining and offensive football, but sometimes you had the feeling that there was not a clear plan and philosophy behind that. Foda detected and understood which new trends developed in the Austrian Bundesliga. That’s no huge surprise as he was himself part of Austria’s top-flight as he was until the end of 2017 head coach of Sturm Graz.

And the direction in which the football in Austria develops is clear: active, offensive and intense football. When we just look at the four best sides there are currently in Austria with RB Salzburg, LASK Linz, Rapid Vienna and Wolfsberger AC, we can clearly see this development. Of course, all four teams haven’t got the same style of play, but their basic idea of football is similar and especially the pressing and counter-pressing are for every team important. 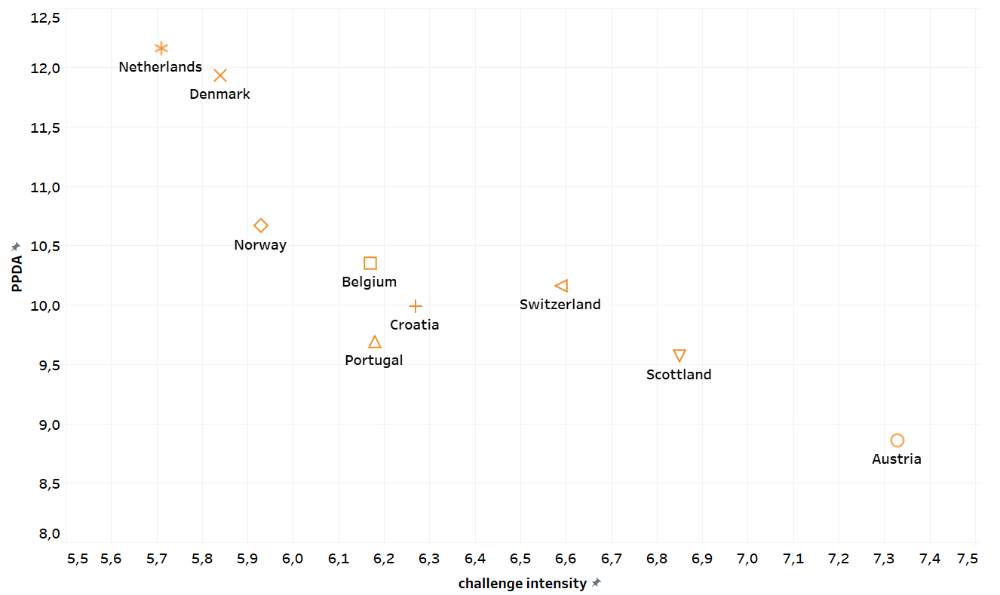 We can clearly see that Austria has for both metrics the “best” values as PPDA is the lowest one while for challenge intensity the highest. That tells us that an aggressive and intense style of defending is quite common in Austria’s top-flight.

Now, we look at the line-ups which Foda chose in the three out of the last four games in the Euro Qualifiers (we don’t count the last one as they already were qualified and due to the fact that he rotated much). In every single game exactly six out of the 10 outfield players of the starting XI currently play or have played for RB Salzburg within the last couple of years. This means that they are used to this intense style of play.

Considering this, the German coach understood that the majority of his players either play in the Austrian Bundesliga or did so within the last couple of years and are used to these tactics. Of course, you also need to mention that within the last two or three years the league, especially Salzburg, has produced some serious Austrian talents. Foda has probably the best Austrian squad within the last 10 or 20 years, but still, you need to put these players together in a good system with the right tactics and he did so as we can see in the stats at which we looked in this first section of the scout report. Next, we will investigate how he uses his two star players: David Alaba and Marko Arnautović.

The role of David Alaba

The 27-years-old already played 72 games for the Austrian national team and is not just the best Austrian football player of the last decade but surely also the most variable one. He became one of the best left-backs at Bayern Munich where he also sometimes plays as a centre-back as he did in several games in this season. In truth, he was at the starting point of his career defensive midfielder and made several appearances in the central midfield for Austria (under Koller he played especially in the central midfield).

However, you always had the feeling that Alaba plays way better for Bayern than for Austria. Many people say that the reason for that is that at the Bundesliga champions he has better teammates who put him on a higher level. That is surely one part of the story, but the most important one is that he rarely was able to make the most out of his abilities in the central midfield when he played for Austria.

Currently, it seems as Foda found a way to get out the best of the Austrian. The German head coach always lines his team up in a 4-2-3-1 formation with Alaba on the left-wing, two defensive midfielders with a high work rate, Marcel Sabitzer behind the lone striker Arnautović and both wingers have a lot of freedom as they have full-backs behind them who provide width and often push forward. In the graphic below, we can see their line-up for the game against North Macedonia and the typical movements of the players. 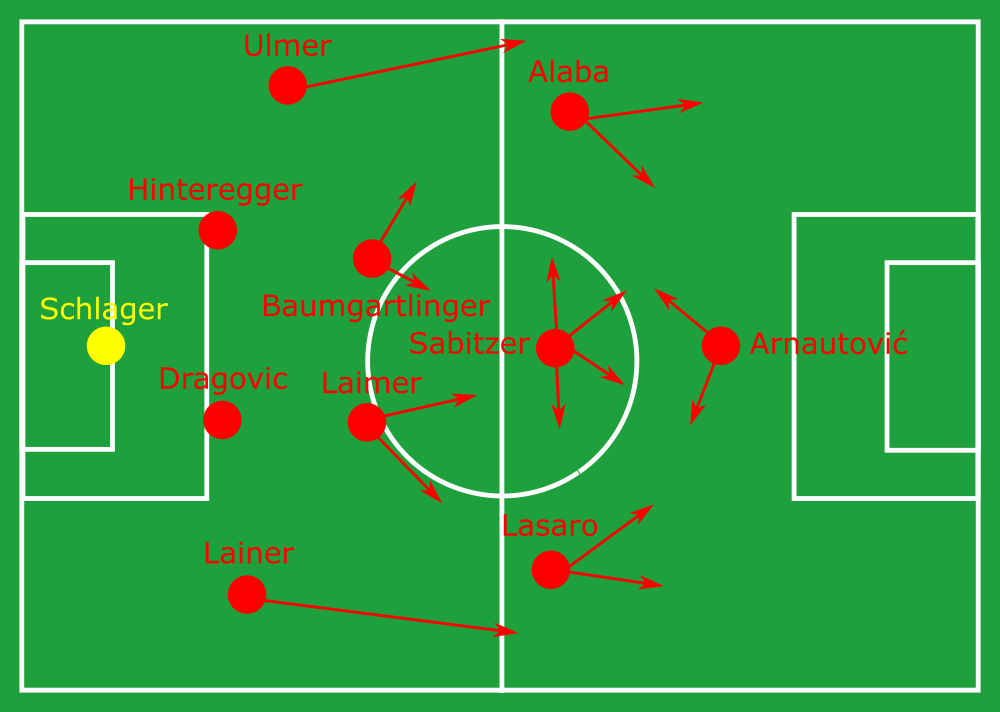 So, since Foda is a  huge fan of the left-back Andreas Ulmer and mostly lets him play on the left side of the back four, Alaba has as the left-winger a player behind him who permanently pushes forward and provides width. This allows the Bayern Munich player to look for free spaces in different areas of the pitch as he can leave his usual position due to the movements of Ulmer.

Additionally, you have with Alaba and Valentino Lazaro two players on the wing who play for their clubs mainly as a full-back and a wing-back respectively. Considering this, they have good defensive abilities and are also aware of their defensive duties. When you combine that with a central midfield made of Sabitzer as the offensive midfielder and a double pivot made out of Julian Baumgartlinger and either Stefan Laimer or Stefan Ilsanker it’s hard for the opposition to even overcome the midfield five.

Marko Arnautović: Between genius and madness

The 30-years-old forward was never a player who worked incredibly hard for his team and this will surely not change within the last few years of his career. However, the Austrian perfectly fits into the tactics and the system of Foda. At first glance, this is probably surprising as even though Arnautović has undoubtfully a great technique and a solid shot, you wouldn’t expect that he fits into a team which press aggressively as he’s a player with a low work rate.

The solution of Foda is to let him play as the single striker in the 4-2-3-1 while Koller often used him as a left-winger. Anyways, often the problem occurred that the left-back received no support from the 30-years-old since he rarely ran back to help the defence.

In Foda’s system, Arnautović’s main task during the pressing is to cut off the passing option back to the central defender when the ball is played wide. He rarely puts pressure on any opponent, but just positions intelligently to take out the passing option into the centre while Sabitzer (who always plays as an offensive midfielder), the wingers and the defensive midfielders execute the actual press.

Also, in the situations when Austria put pressure on the opposition at about the halfway line, the forward stays higher to take a break and also to be then an option for a forward pass as soon as his team won back the ball. In the shot below we can see a perfect example as he stays upfront while his teammates execute the press at about the height of the halfway line. 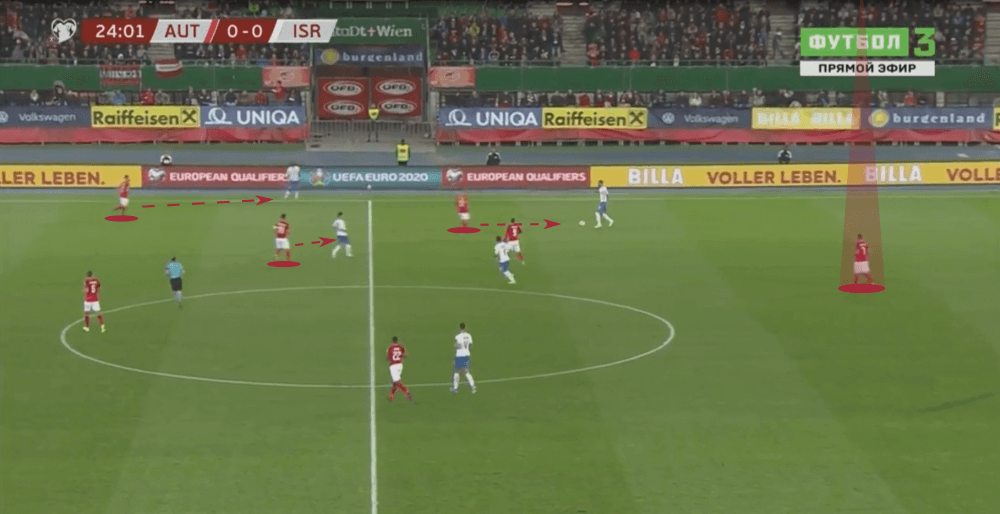 Also, Foda found a solution to get the most out of Arnautović during the attacking phase as he and Sabitzer work well together. RB Leipzig’s central midfielder is one of the most complete players of the Bundesliga and compensates with his work rate the laziness of Arnautović. But also, during the build-up and the creation of goalscoring chances, these two harmonize as both are extremely flexible.

In some moments Arnautović drops deeper and a winger, Sabitzer or even a defensive midfielder run forward to position in the central area higher up the pitch and in the next situation the forward is positioned in the penalty box to wait for a cross. This flexibility helps almost all players of Austria since Sabitzer, Alaba, Lazaro, Laimer and several others are all players who are defensively and offensively strong. Besides, all of them can play in several positions and often use different movements throughout the game to always occupy different spaces.

Considering these aspects, we can conclude that Foda does it the right way as he gives Arnautović a lot of freedom, which he needs, but included him in some way in the pressing tactics and the other offensive players are so variable that they can react on the movements of the forward.

To put it in a nutshell, the German head coach slightly changed the tactics and for that he orientated after the football which is played in the Austrian Bundesliga. Additionally, he was able to combine this style of play with the strengths and weaknesses of Austria’s two best players.

On the other side, I’m not sure how long we will call these two the best players of Foda’s team as especially Sabitzer and Laimer have become incredibly good within the last couple of months. It will be interesting to see how the Austrian national team will develop within the next year as they await Euro 2021. Maybe they will be again among the secret favourites, but this time they will probably prove it.