After nine months without international action, fans of the US men’s national team were finally able to get a glimpse into the future. Head coach Gregg Berhalter called up a squad of young Americans based in Europe, so as not to disrupt the MLS playoffs back stateside. Drawing 0-0 against Wales in Cardiff, they took on fellow CONCACAF rivals Panama in an international friendly.

The Panamanians have been able to play a few more fixtures since football has restarted. Playing a series of games against Costa Rica, they had just lost 1-0 to Japan. New coach and former Barcelona player and Spanish international Thomas Christiansen has been able to use these friendlies to see what his players are capable of.

At the end of the night, the American young guns blitzed Panama with an electric offensive display. This tactical analysis will look at how the US picked apart the opposition, and how the Panamanian attack exposed some of the Americans’ faults.

Berhalter went with the usual formation employed by the Americans recently. Caen striker Nicholas Gioacchini was given his debut at striker, and he was flanked by Borussia Dortmund wonder kid Gio Reyna and Ulysses Llanez. The midfield trio of Weston McKennie, Tyler Adams, and former Arsenal academy product Yunus Musah retained their starting roles. 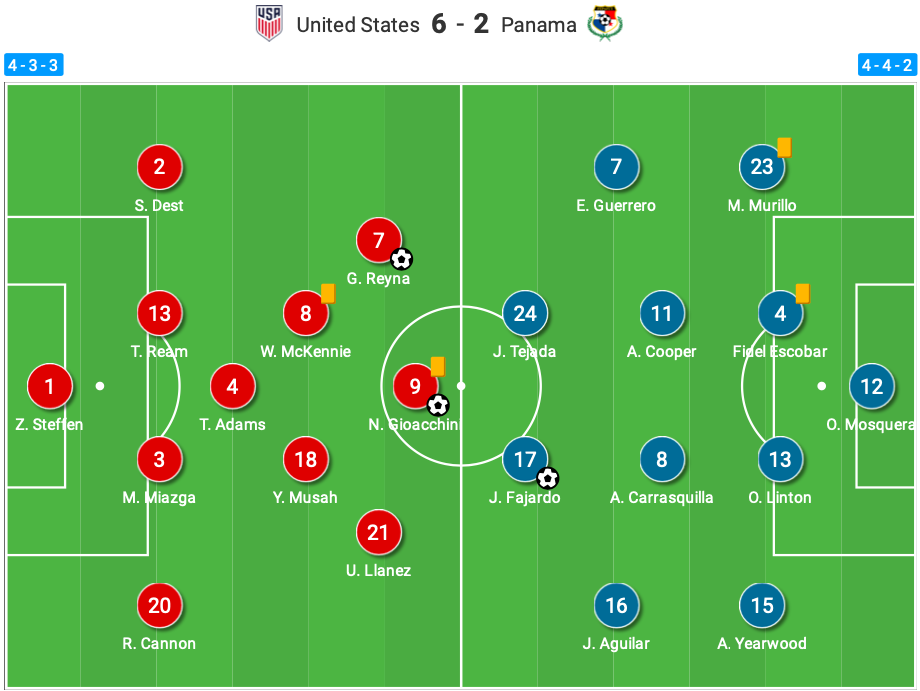 Los Canaleros had a relatively inexperienced squad for this friendly. The international retirements of Panamanian greats such as Luis Tejada and Gabriel Enrique Gomez have left big shoes to fill. They were also not able to count on Roman Torres or Anibal Godoy due to their respective teams participating in the MLS playoffs.

Panama in the attack

Los Canaleros primary form of attack was looking for the two strikers through crosses, or combination play. The Panamanian forwards would rarely be on the same line when in possession. Oftentimes, one forward would position himself between the two centre backs. In the image below we can see how this simple tactics disoriented the American central defenders. 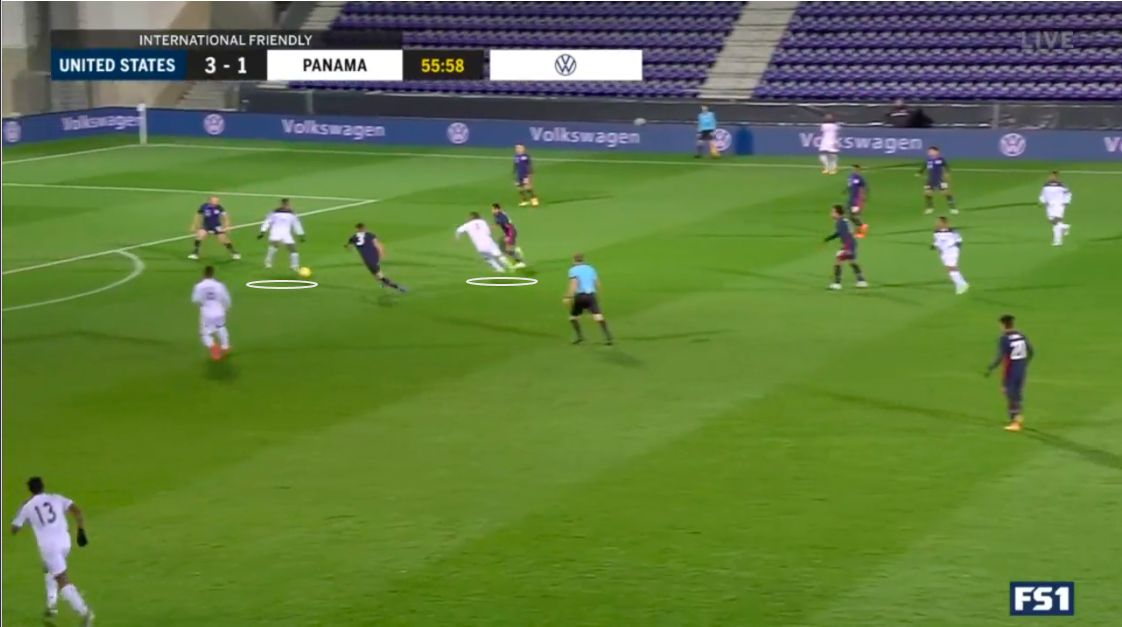 The other forward would play off of his partner’s movements. Since Fajardo is positioned higher, Torres sits just underneath in a pocket of space. One striker is a target while the other receives the drop. Combined with crossing, Los Canaleros were able to use this movement to score their goals.

Using their opening goal as a reference, we can see this movement in action. Picking up after a long pass wide, left-back Yearwood has time and space to look up before his cross. We can already see Fajardo positioning himself in Miazga’s blindside. Tejada’s movement has pulled Ream away from his defensive partner, isolating Fajardo with Miazga. 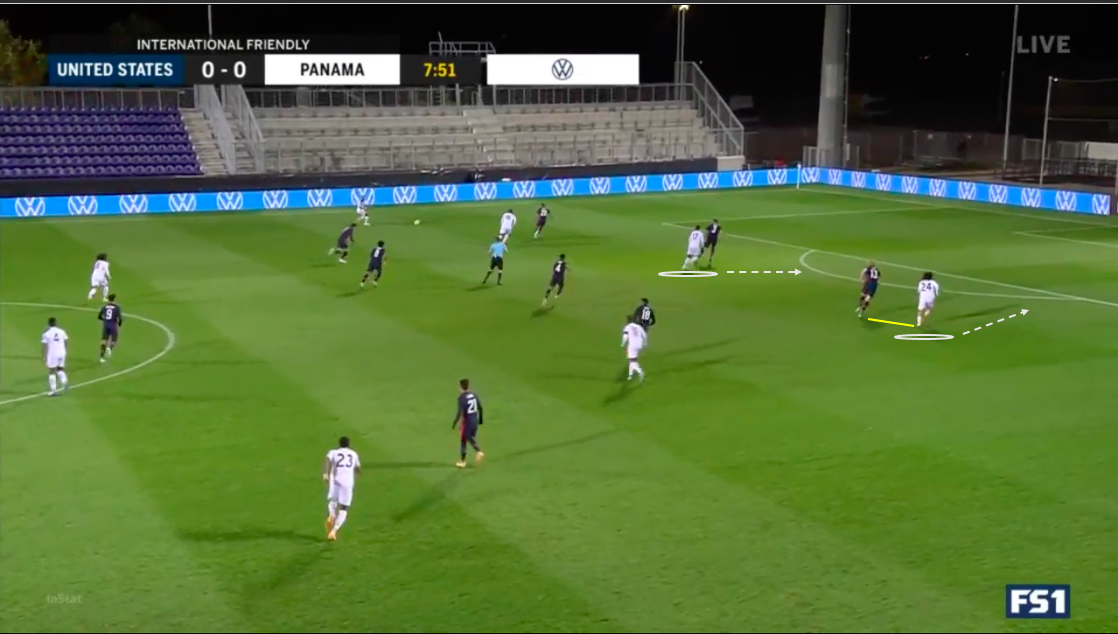 Fajardo continues his run in Miazga’s blindspot and is able to remain unmarked with Ream still marking Tejada. The Panamanian striker coolly steers his header past Manchester City’s Zach Steffen. 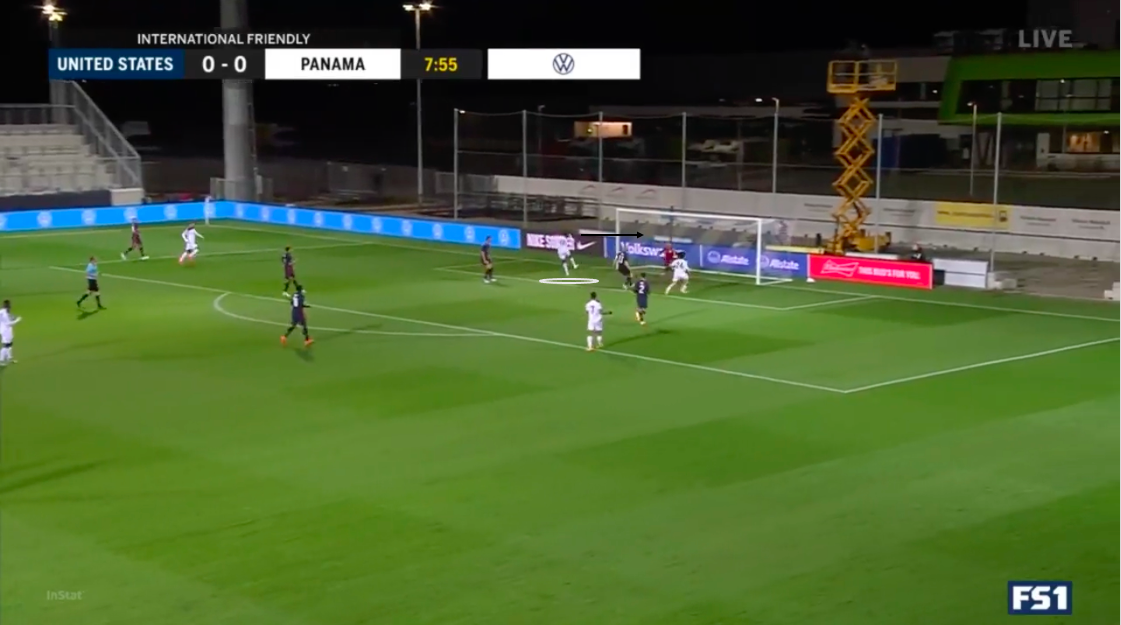 In the following section of the analysis, we will take a look at how this movement was a problem defensively for Ream and Miazga.

For the most part, the USMNT were able to use their offensive phase as a sort of defence against the Panamanians. With a commanding 70% possession in the first half, the Americans were rarely troubled defensively. When they did not have the ball, they pressed Panama heavily. As we can see below in the analysis of their pressing intensity, the US were able to maintain their defensive intensity throughout the first half. 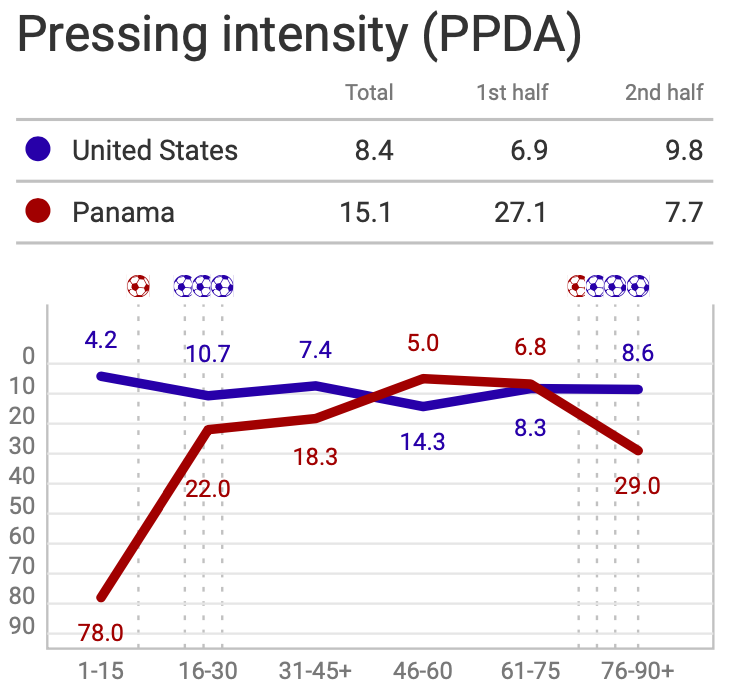 Defensive faults for the Americans

The Achilles heel was the partnership between Ream and Miazga. Panama’s two goals were a direct result of a disconnection between the pair. We have already seen how in the build-up to the first goal, Miazga lost his mark as a result of ball watching. There were instances where both lost positional discipline and were also pulled out of position. 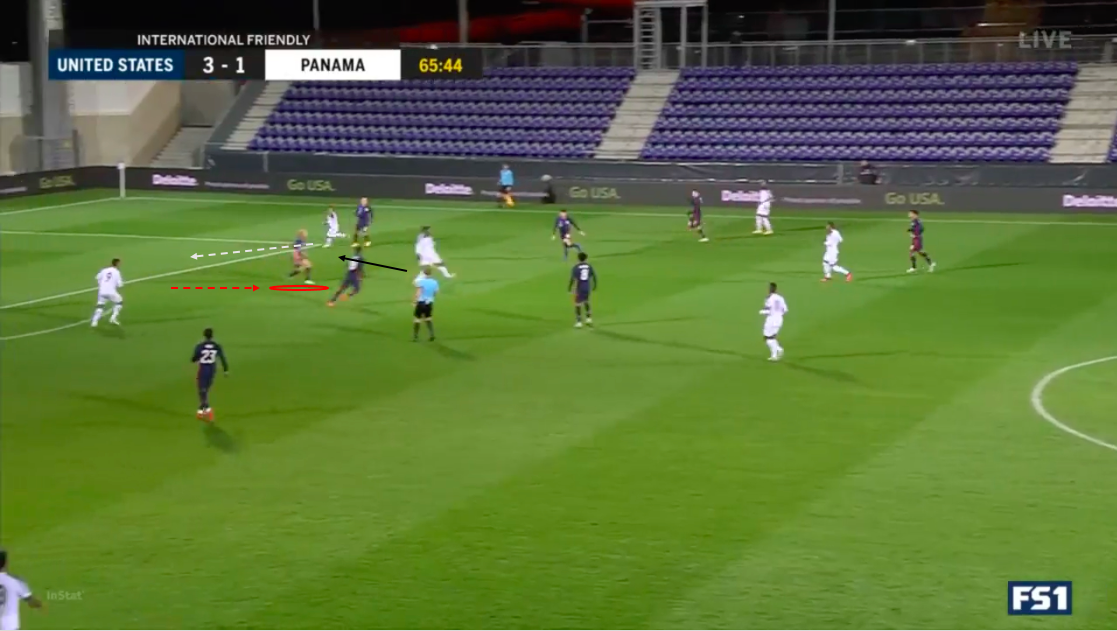 Los Canaleros would look to exploit the gaps in behind. In this example from the second half, we can see Ream stepping to close down a Panamanian midfielder. The Fulham defender doesn’t quite arrive on the Panamanian’s first touch. 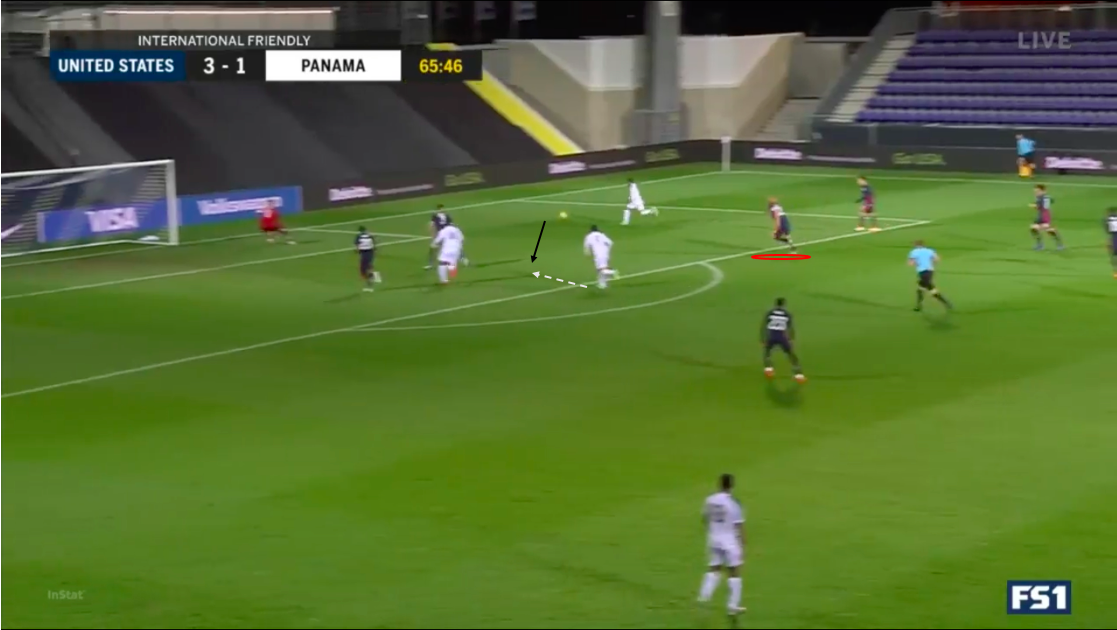 The attacker is able to flick the ball past Ream to his right-winger, who has timed his run to beat Dest and remain onsides. The Panamanian winger now has acres of space inside the penalty area, where he is able to cross. Although the subsequent shot is not on target, a more clinical forward is able to punish this sort of defending.

The final example is in the buildup of Panama’s second goal. As we see Ayarza dribbling forward, Fajardo is again positioning himself between Ream and Miazga. Miazga then decides to step across from the right, putting himself in front of Fajardo. 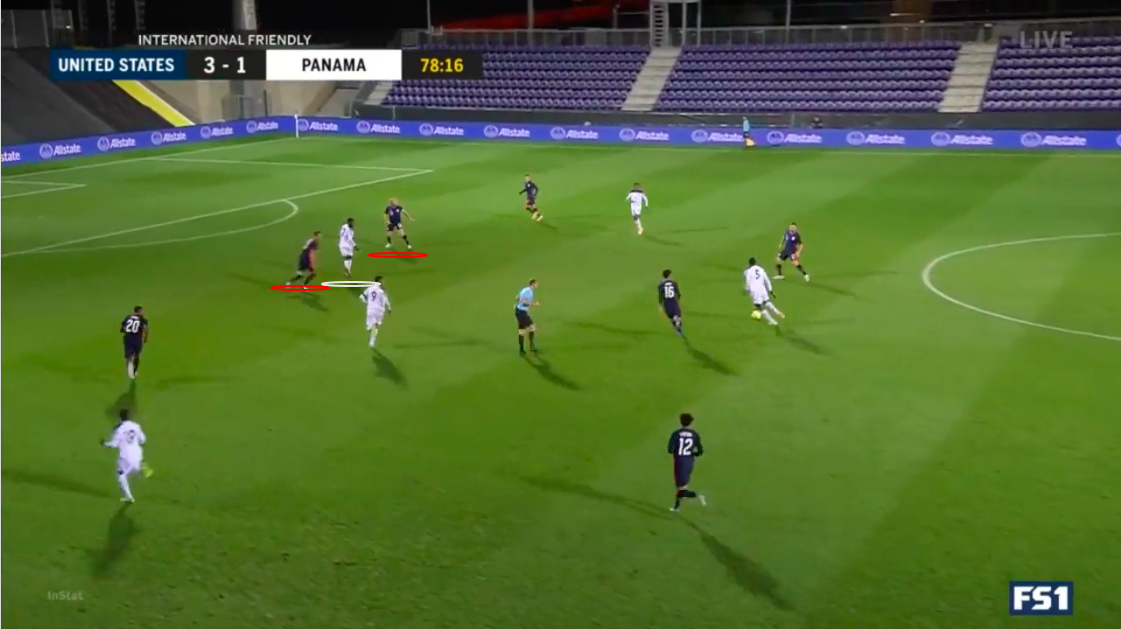 After Johnny puts in a tackle, Miazga remains in front of his defensive line. Ream also remains ball watching, and this focus on the actions in front of them has blinded them to Torres and Fajardo. 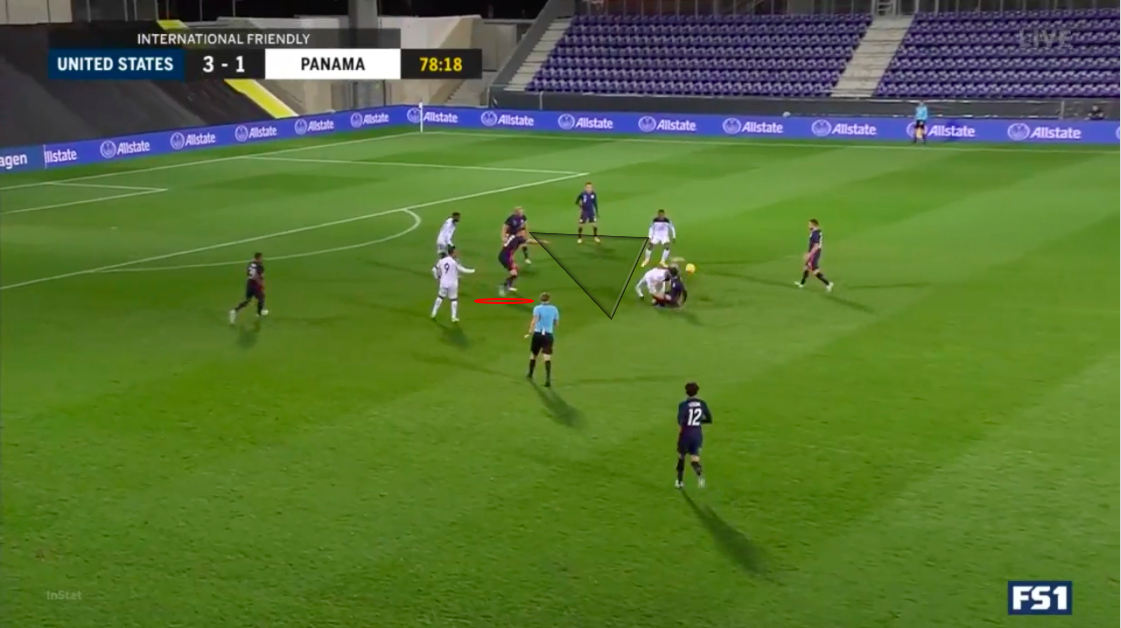 Browne is able to react quickly and clip a through ball between the Americans, who are immediately beaten by Fajardo.

Los Canaleros defended in a slightly passive 4-4-2 for the first half. Referencing the pressing intensity analysis from before, they were able to increase their intensity from 27 passes per defensive action in the first half, to 7.7 in the second half.

Their aim was to congest the middle with two defensive lines of four, while the forwards looked to play predictable and keep the attackers from switching. This defensive tactic forces the opposition to play around the defensive block. Below we see an example of their low block in action. 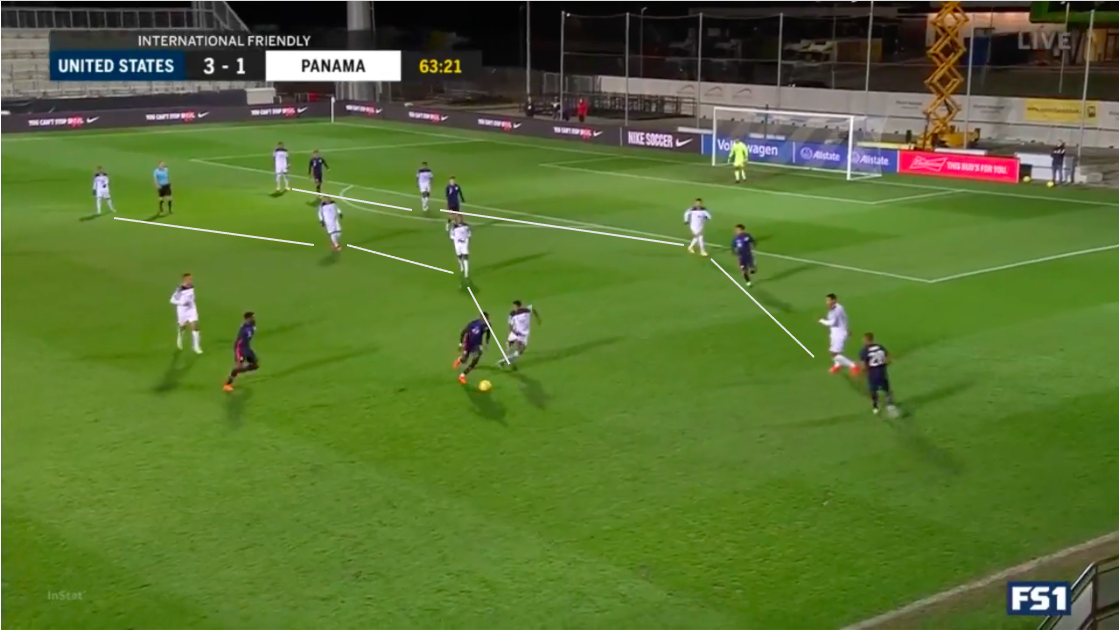 The main problem with their low block is the lack of compactness. Normally the opposition forwards would not be able to have so much space between the defenders. This allows the attackers to play through them with more ease than they should. 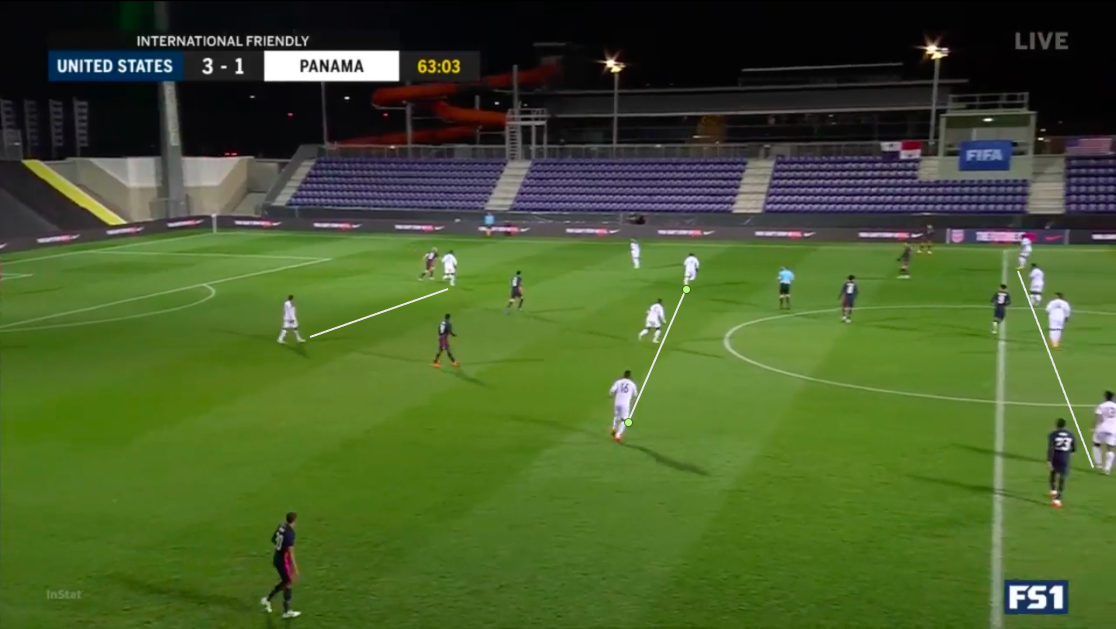 This problem also extended to their middle block. The Panamanian defensive lines were disconnected, allowing the Americans to play through them at will. Using the example above, we can see that they are maintaining their defensive shape. However, the spacing between the lines and the defenders allows Ream to skip the midfield line to his intended target.

While the young Americans were in a 4-3-3 on paper, their attacking structure was entirely different. With Dest and Cannon pushing higher up the field, Reyna and Llanez were able to drift inside to the halfspaces. We can use the analysis of their passing combinations to see their average positioning. 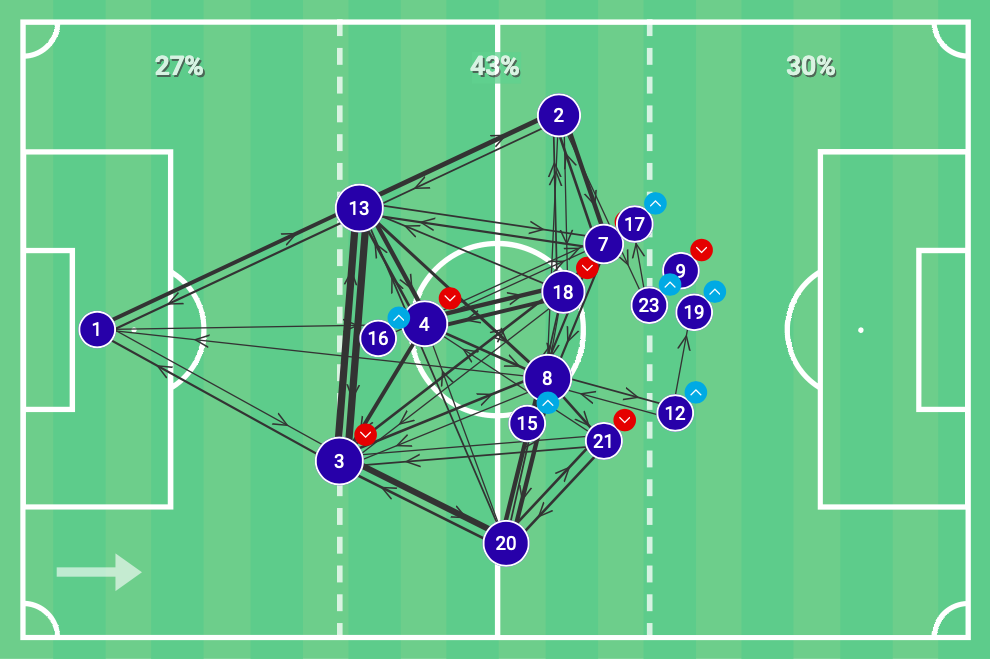 Using the same graph, we can also see which players kept the tempo for Berhalter’s side. The amount of touches is indicated by the size of the dot. Knowing this we can tell that play flowed through McKennie and Adams.

The tactics that were able to get the goals the US were creating numerical advantages on the flanks, and movement off of the ball to disorganize the opponent. Below we will take a look at an example of each to better understand how the US was able to get through.

In the build-up to the third goal, Dest is holding the ball up after a corner was cleared. Seeing as Adams was his only option he passed the ball back to the Leipzig midfielder. 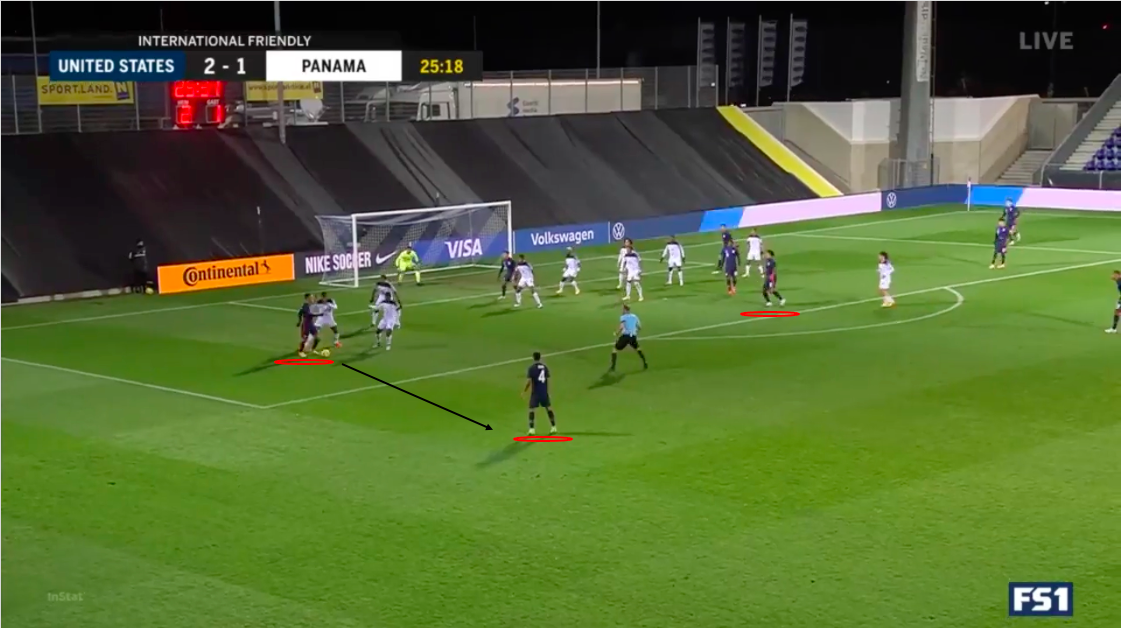 As Adams shapes up to cross the ball back in, McKennie makes a diagonal run. Executing a reverse pass, Adams is able to find the Juventus midfielder behind the defensive line. 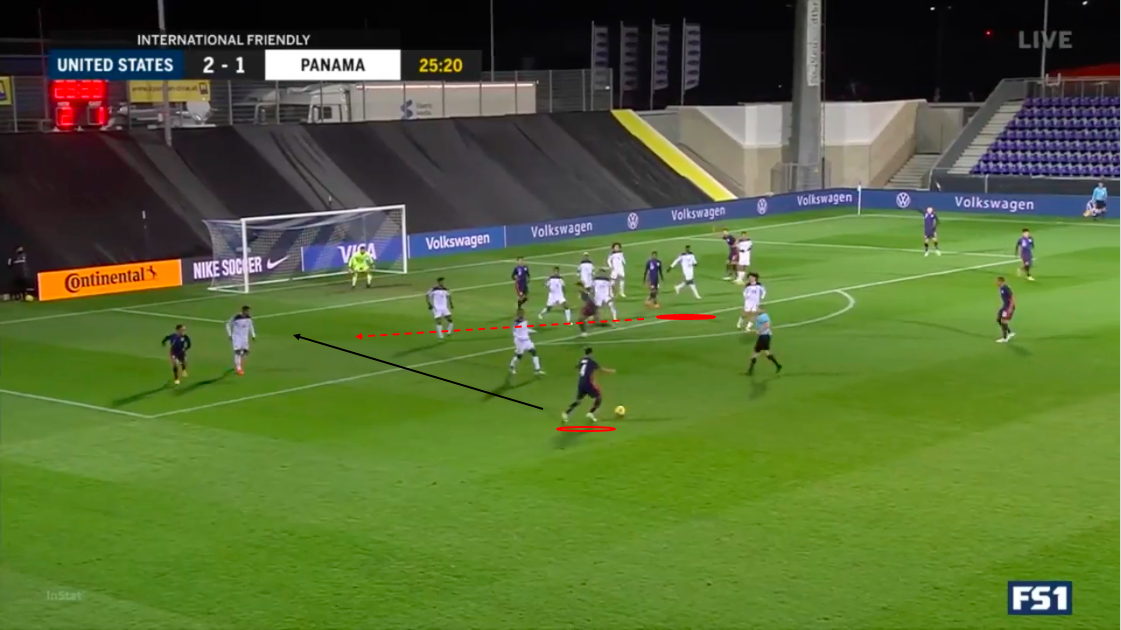 McKennie then digs out a cross to the back post, where Miazga heads a pass back to Gioacchini, who scores his second. 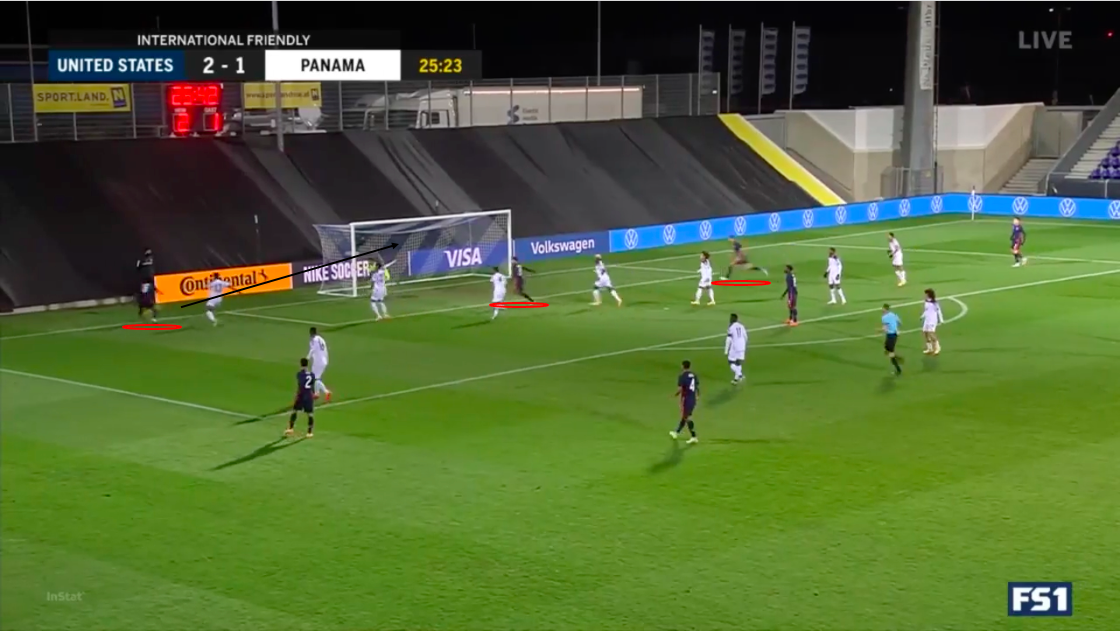 Use of the flanks

In the second half, we see an example of numerical overloads creating superiority on the opponent’s weak side. We see that Lletget is preparing to pass to Cannon, who is making a run into space. The Americans’ build up on the left has drawn the Panamanians across the field, creating space for Cannon and Ledezma on the right. 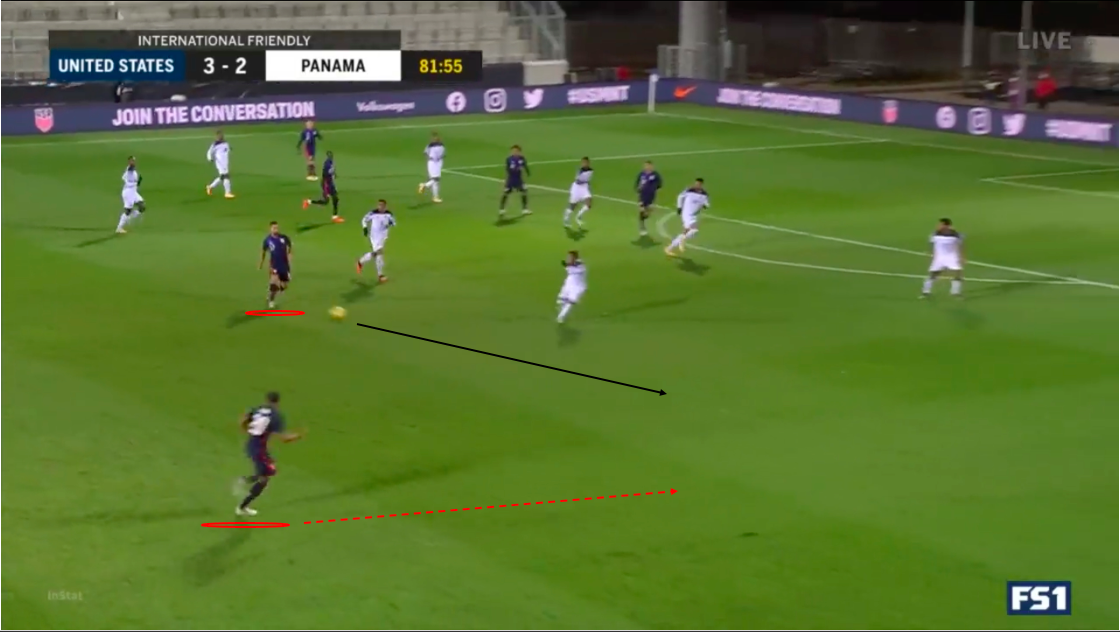 Cannon passes the ball along to Ledezma and immediately moves to overlap the right-winger. This causes the defenders to decide whether to pick up the right back’s run or press the winger. 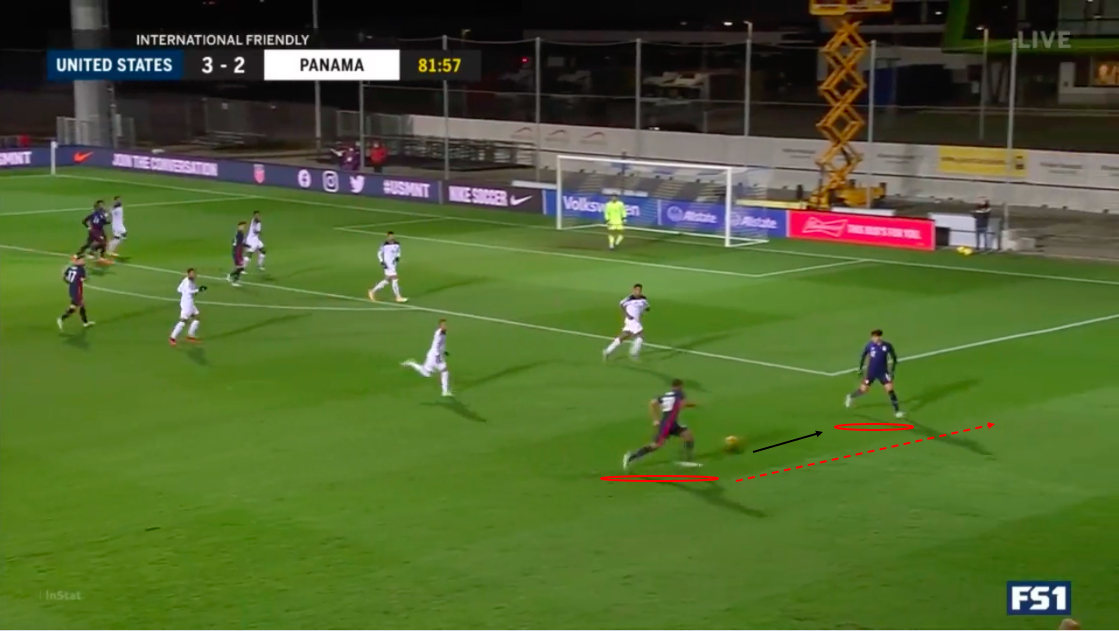 The temporary pause allows Ledezma to pick his head up and calmly pick out Soto, who expertly finishes off the move. 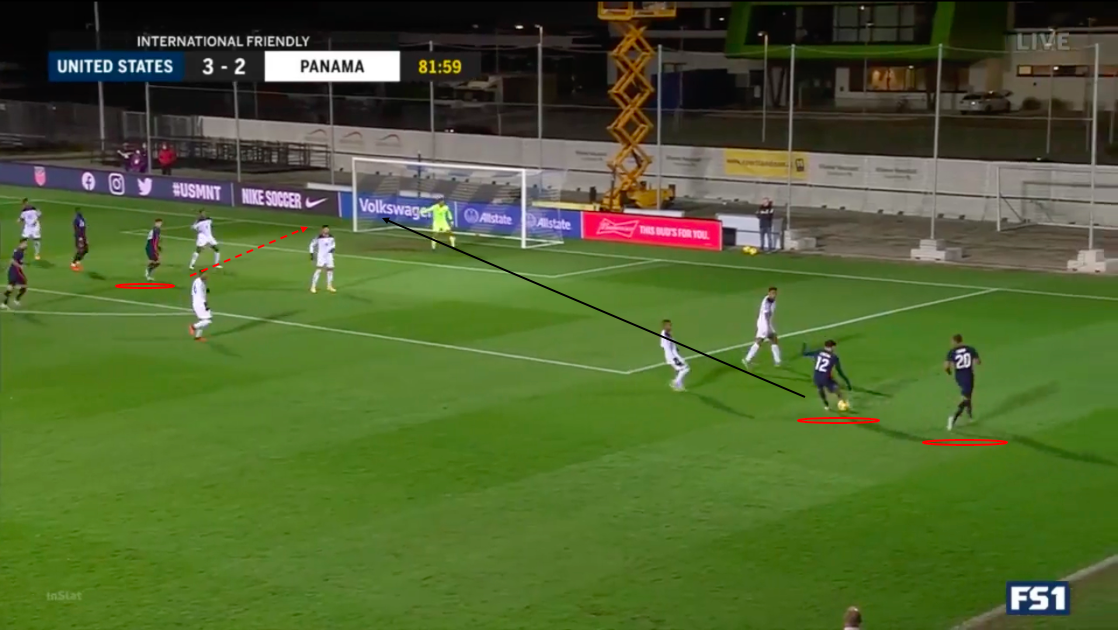 This game of contrasting styles ended with the USMNT picking Panama apart with the left-sided combo of Dest and Reyna. Los Canaleros were also not able to handle the boundless energy of McKennie and Musah. The future looks very bright for the US, as this exciting young group of players is growing by the week. Panama seems to have more work to do before the upcoming World Cup qualifiers, a task that Thomas Christiansen is up for.