This Chinese Super League final first leg ended with a draw. Guangzhou Evergrande dominated in possession and created some chances, while Jiangsu Suning’s defence was solid to prevent goals. 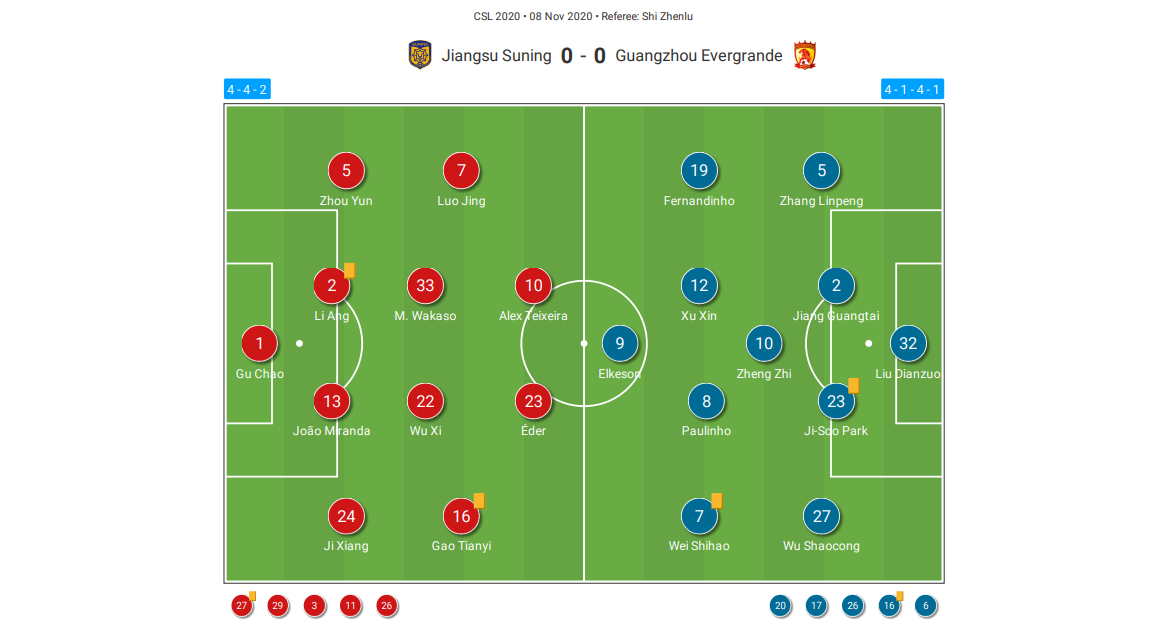 In this match, Guangzhou Evergrande’s xG was higher than Jiangsu Suning (0.26-0) and shared more possession (64%-36%), which means that they were more effective and dominated in the attack in this match. Thus, in this section, we will delve into how Evergrande attacked in this match.

Suning employed different blocks in a different period in the match, and for most of the time when they were out of possession, they utilised a mid-block to engage the ball. At the beginning of the match they would press high to restrict Evergrande to play out from the back easily, deploying a 4-4-2 block against Evergrande’s 4-2-3-1 system.

When Suning pressed high, Evergrande tried to penetrate the block with a dropping inverted-winger. It could be Wei Shihao or Fernandinho. With an inverted-winger dropping in this phase, it would activate two possible movements from other teammates: 1. A pivot would rotate with the dropping winger to occupy the height on the pitch; 2. The full-back on the same flank would run forwards to occupy the space the winger vacated.

As the movement was executed, the ball development would have two variations. The running-forwards full-back or rotated pivot could be directly picked, or, the dropping winger could serve as a link player to link the play forwards if his body shape was open.

Then as the ball was brought forwards, early in-swinging crosses from the deep area would be executed to find runners like Wei or Ai Kesen, aiming at the space behind the defensive line and in front of the goalkeeper. Nevertheless, the crosses from deep were not very effective to directly create finishing chances as Suning’s central defenders were anticipating and dropping well. Also, the in-swinging crosses permitted time for those defenders to get in their position in time.

Above is an example of how Guangzhou Evergrande broke Suning’s high press. Fernandinho dropped deep into the own third to receive. This time he couldn’t turn so he picked his teammate who was facing forwards. Meanwhile, the right-back Zhang Linpeng ran forwards to occupy the space Fernandinho vacated and was picked immediately. Then he progressed the ball a few steps forwards and hit an early in-swinging cross behind the defensive line, whereas it was intercepted.

With Evergrande breaking Suning’s high press easily and space behind threatened to be exposed, Suning altered their defensive tactics and formed a mid-block to meet the ball. As the engagement line went a bit deeper, Evergrande could progress the ball to the midfield without any pressure. In this breaking the mid-block phase, two main methods were used to create chances.

The first one would be an easy approach of skipping the lines to find runner in-behind. The striker Ai Kesen was the one to find under this tactic as he enjoyed exploiting space behind the defensive line. Also, the passes mostly directed him into the half-space and he would be the one to hit the final pass. As two inverted-wingers and the number ten in this match, former Tottenham Hotspurs and Barcelona player Paulinho, all positioned between lines, the cut-back was the most effective method to create chances under this scenario.

Above is an example of this direct approach. Ai Kesen was running in-behind after reading the cue of his teammate Park to release the pass. He was directed into the half-space and got the ball there. Then Wei ran forwards a bit and received a cut-back pass from Ai. He beat one opponent and finished a shot of high-quality.

The second breaking the mid-block approach would be applying the principle of creating density in the centre for combination, freeing the flank for side-backs to hit the cross. That means two inverted-wingers will position themselves in central spaces, zone 14 most likely, and the attacking midfielder Paulinho would also stay between lines to link the play. The striker Ai would also drop a bit, using his one-touch pass to activate the status of Paulinho facing forwards. The logic of such tactical deployment was that Evergrande’s full-back Zhang Linpeng could hit crosses of high-quality when he had the opening to execute the technique. Also, front-four had decent combination in the zone 14 and could penetrate the defensive line due to this. 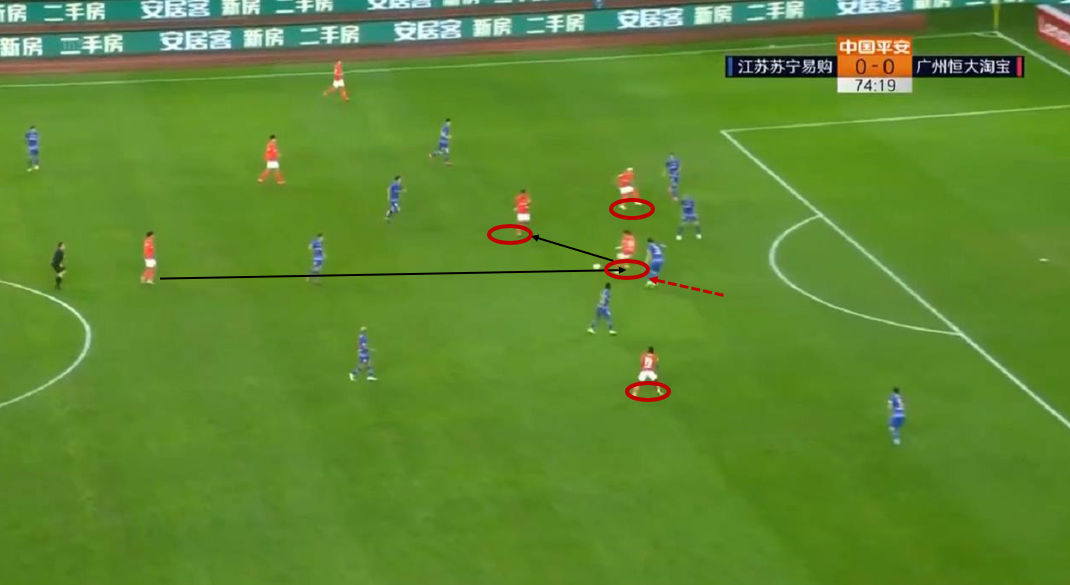 The above image manifests such tactical deployment. The front four occupied zone 14. In this scenario Ai dropped to receive from deep and used one touch to find Paulinho, who faced forwards between lines and ready to execute a final pass. However, Suning’s defending was solid and they were able to close central spaces quickly. Thus, Paulinho took his touches outside and this cued Zhang to run forwards on the outside. Then Zhang latched onto the ball and hit a cross of high-quality.
Though in the second half Evergrande was effective in penetrating the midfield line this way, Suning’s defending was solid to prevent Evergrande from using the centre, which will be discussed later.

As we’ve mentioned in the above section, Suning’s xG was 0. It was not without reason. To find out Suning’s offensive issue, firstly we will dissect their offensive tactics.

As Evergrande pressed high, basically they had two patterns to break the press, one of which was to drop one winger to the midfield. He would then find the pivot Wu Xi and activate him to face forwards. Then Wu Xi would dictate the play and find two strikers in the 4-4-2 shape. Those two were Teixeira and former Seria A, Internazionale player Éder.

As you can see from the above image, left-winger Luo Jing dropped to the centre in the midfield. He was picked and he used an accurate one-touch pass to find Wu Xi. Wu Xi was freed and faced forwards. He then dictated the play and passed the ball to the front-two, in order to make use of their qualitative advantage.

Though Wu Xi’s passing stats were good (forward passes- 11/13, accuracy 85%), the actual quality of his progressive passes were not very decent. The front two could bring down the ball, however, they found it exhausting to chase and combat for the first ball.

Apart from using the pivot to dictate the play, Suning also utilised a direct approach to finding the front two. They would circulate the ball in the back and enticed Evergrande’s block to step and created more space behind the block for front two to utilise. The front two would also coordinate their movement to attack the defensive line.

Above is an illustration of their direct approach. Éder stepped out and combatted for the first ball, while Teixeira ran in behind to exploit the potential finishing opportunity. In the midfield, four midfielders stayed compact and tried to combat for the second ball. In this scenario Éder succeeded in getting the first ball, he then laid off the ball to his midfield mate on the flank.

Under this tactic, Suning was not very effective as the first balls were more towards the midfielders. Also, the balls were forced to the flank and they found it hard to initiate attack from the midfield and the flank. Thus, they were not capable of creating effective chances in this match.

Though Suning was not able to create chances, their defending was solid enough to prevent them from conceding goals, especially the closing of the central spaces. They prevented Evergrande from using the centre to release final passes and forced them to the flank. It was acceptable for Suning that Evergrande hit the cross as their defenders were tall and good at aerial duels.

To close the centre and prevented Evergrande from hitting final passes in the centre, Suning’s midfield line was doubling-up with the defensive line and they tracked back quickly.

Above is an example of their midfield line doubling-up. The inverted-winger Wei received the ball in the centre between lines. The midfield line was bypassed. However, the pivot Wu Xi quickly tracked back while the defenders were trying to prevent Wei from turning. Wu then direct challenged the ball and recovered the ball.

The cautiousness of both teams hindered both teams from creating chances and scoring. The first leg final didn’t give us much surprise. However, we could expect both teams perform better on the second leg.