Bayer Leverkusen were looking to move into the UEFA Champions League qualification spaces on Matchday 5 of the Bundesliga; in their way, a sturdy Augsburg side that have started this season much better than the previous one.

As expected, Leverkusen probed the Augsburg defensive shape with their possession-based style, yet, their goals came from two set-pieces and a last-minute transition, where the Augsburg goalkeeper was out of his net. Meanwhile, Augsburg looked most threatening after their half-time substitutes, when they looked dangerous in transitions; scoring their goal through one.

This tactical analysis will be delving into the tactics used by each manager and will look to determine the effects these different tactical moves had on the outcome of the match; this will be backed up by analysis throughout.

Augsburg were set up in their usual 4-4-2, which would usually turn into an asymmetrical 4-3-3 when out of possession. Rafał Gikiewicz was the man between the sticks and his backline consisted of Raphael Framberger, Jeffrey Gouweleeuw, Felix Uduokhai and Iago. Across the midfield line was Daniel Caligiuri, Carlos Gruezo, Rani Khedira and André Hahn; meanwhile, Florian Niederlechner and Michael Gregoritsch were upfront for Heiko Herrlich’s side. 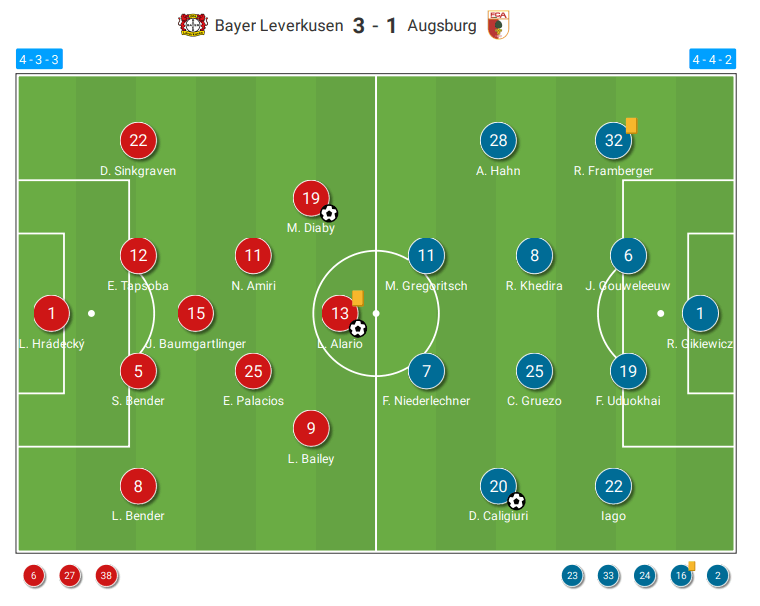 Peter Bosz’s team were in a 4-3-3, with Lukáš Hrádecký in goal and Lars Bender, Sven Bender, Edmond Tapsoba and Daley Sinkgraven were the protection in front of him. Their midfield three included Exequiel Palacios, Julian Baumgartlinger and Nadiem Amiri. Leon Bailey and Moussa Diaby occupied the flanks; with Lucas Alario leading the line.

Bayer Leverkusen were in control for the majority of this game; they had 64% possession and consistently probed the Augsburg defensive structure. In their 2-4-4 build-up structure, Leverkusen’s full-backs moved high and wide; their main source of progression into the final third was through their wide combinations. Below, we can see their attacks by flanks in the game and the danger levels from each flank. 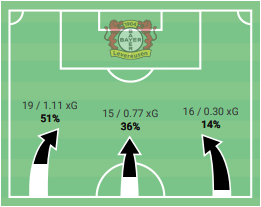 However, as seen in the image below, Augsburg’s defensive shape would change from a 4-4-2 to an asymmetrical 4-3-3 when Leverkusen would look to progress down the flanks. This would limit the immediate progression for Leverkusen, but their ability to retain the ball and wait for the correct opportunity to progress was shown. 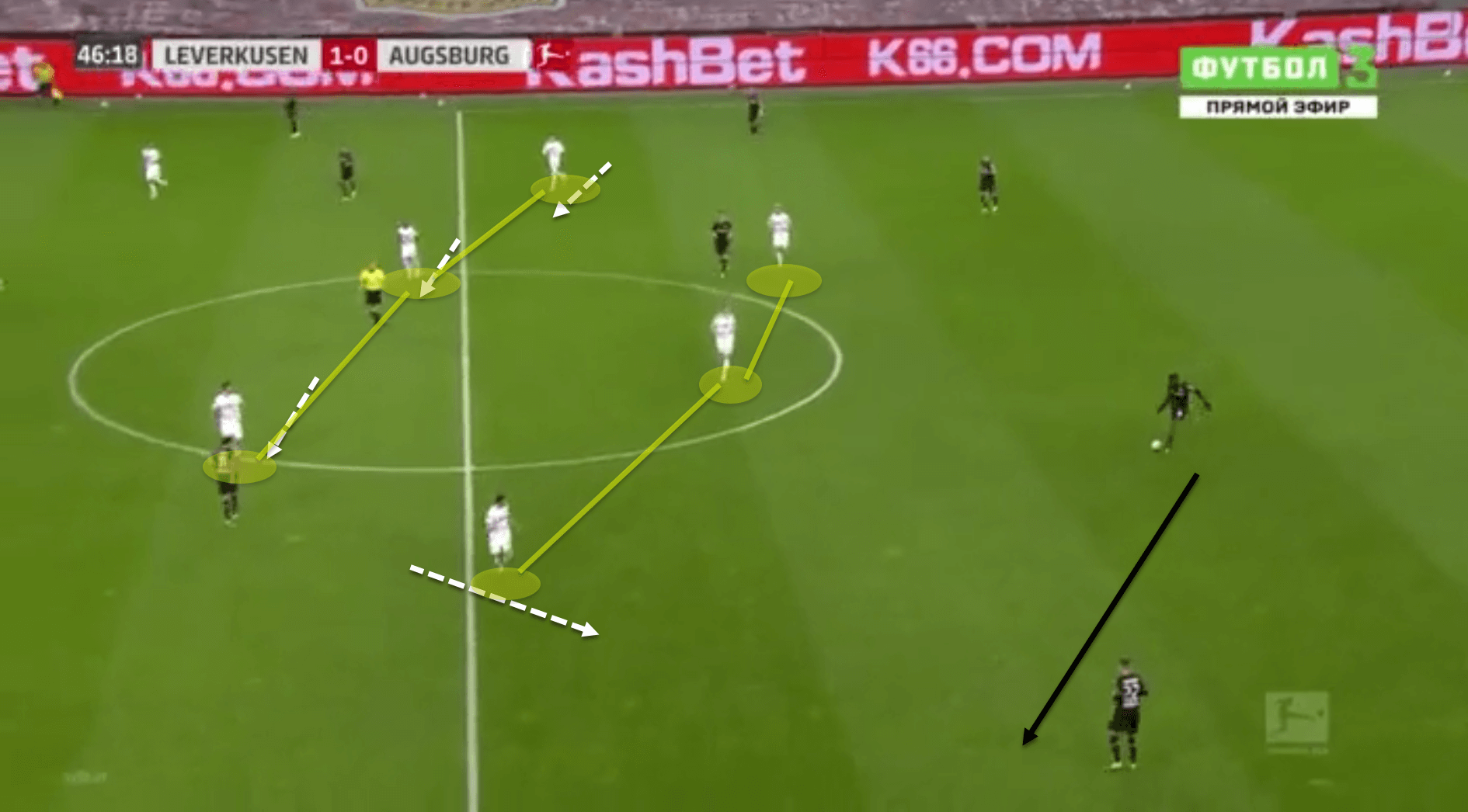 As we can see, when Leverkusen move the ball into the wide areas to the full-backs; the wide midfielder on the near side will step up and engage the full-back, while the opposition wide man will tuck into the midfield line; creating the asymmetrical 4-3-3. 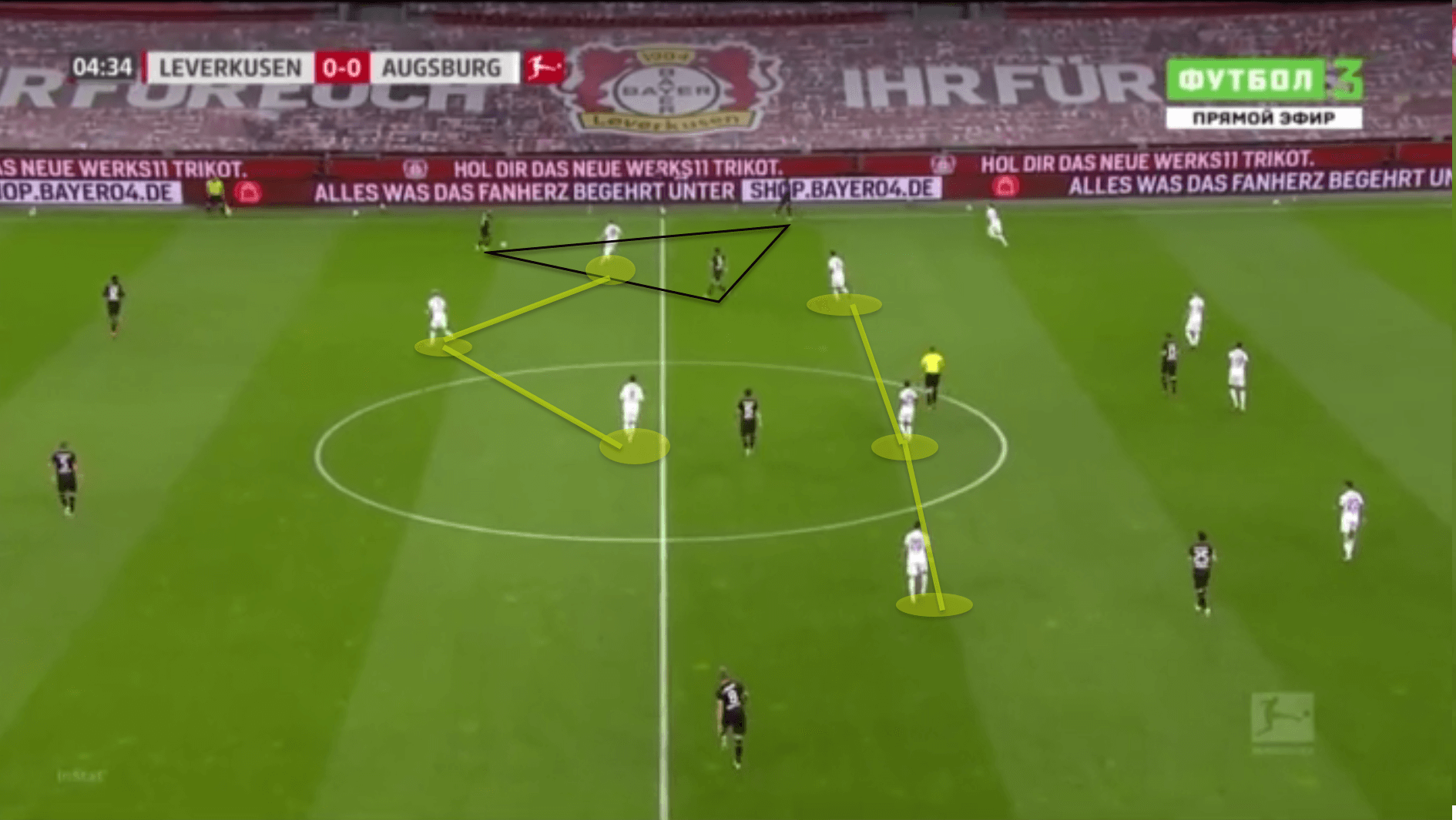 In the image above, we can see that Leverkusen are attempting to progress on the left side, creating a triangle with the full-back, winger and centre-midfielder. Yet, their patience is shown with the recycling of possession as the progression on the left would’ve been difficult; with three Augsburg players pressuring the flank; their defensive shape is shown in this image too. Leverkusen had 36 possessions which were longer than 20 seconds. 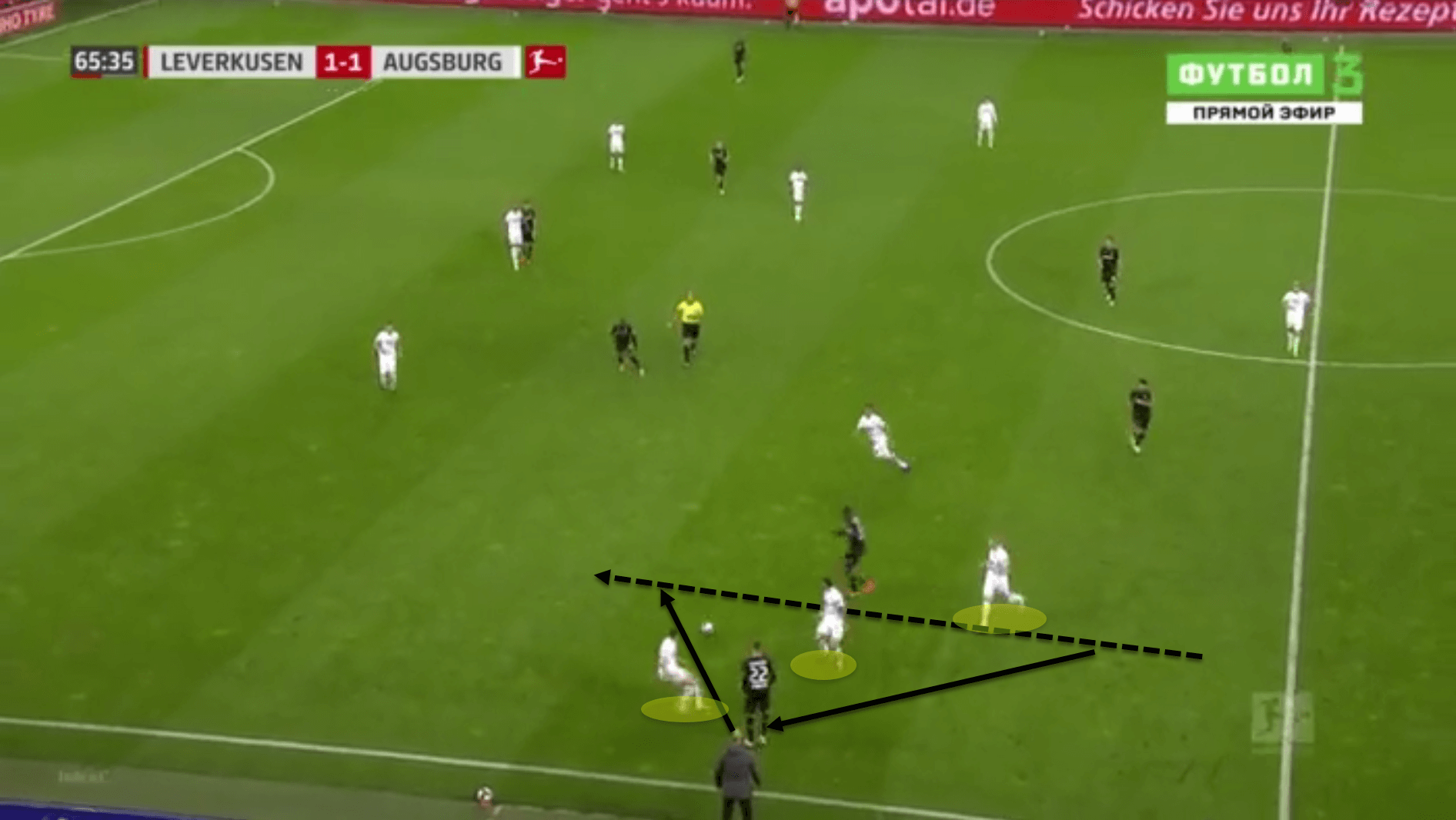 In this image above, we can see the effectiveness of Leverkusen’s wide combinations. Tasoba plays a pass to Sinkgraven on the left, then he carries on his verticle run; the ball is returned to him and this wide combination was able to take three Augsburg players out of the game. Tasoba then played a through ball to Diaby who crosses and in the end after the keeper made an initial save, Bailey strikes the ball onto the crossbar.

It was clear that Leverkusen were looking to build-up through the flanks for the most part of this game. Augsburg’s changing defensive shape was able to limit the effectiveness of this initially but ultimately the patience of Bosz’s side meant they could create numerous chances from their wide combinations.

In the first 30 minutes of the match, Augsburg’s build-up and progression looked to have some good effects; where they looked to play long passes and then either counter-press or win the second balls. However, when they looked to progress the ball in other ways, they were quite ineffective in their attempted progression. 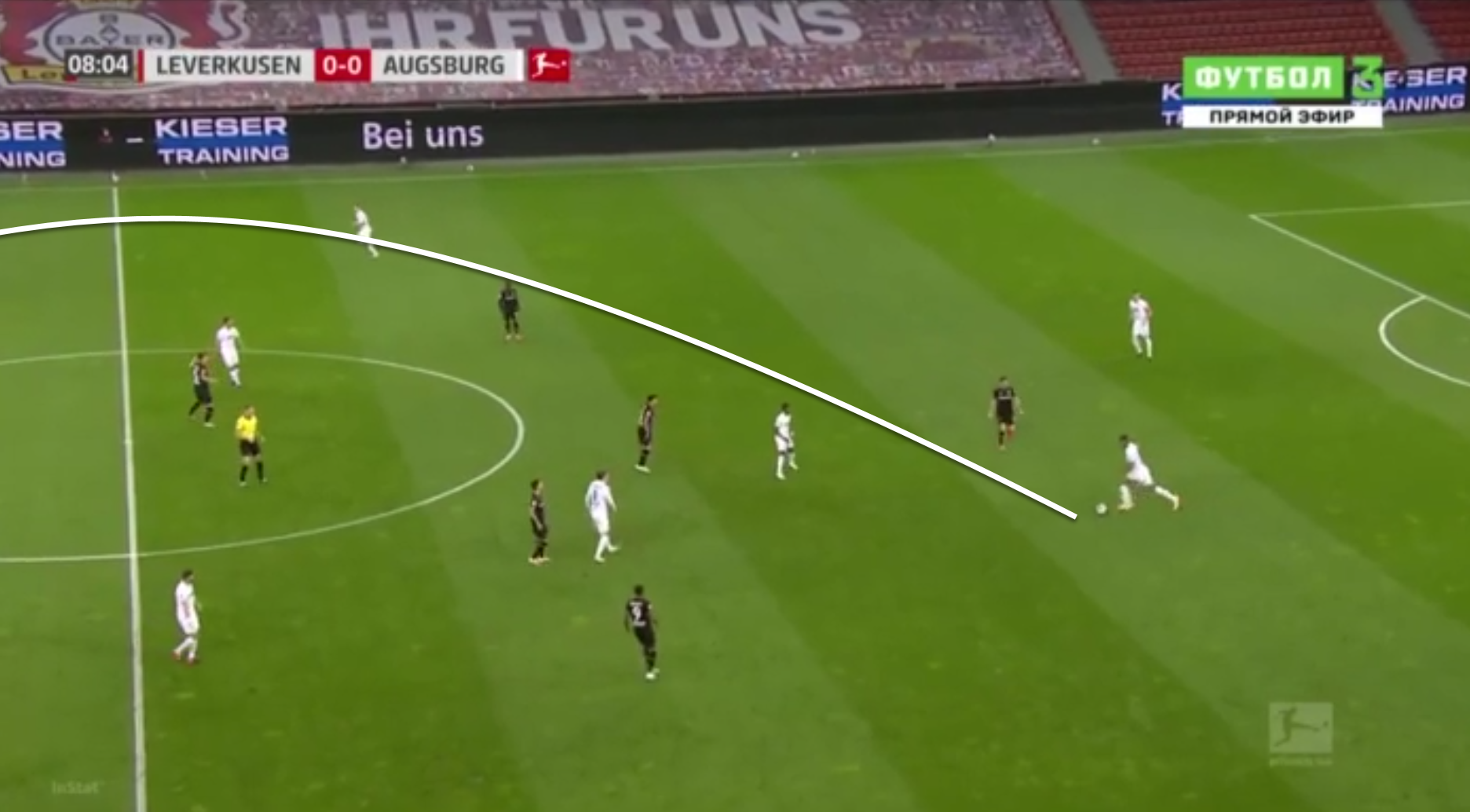 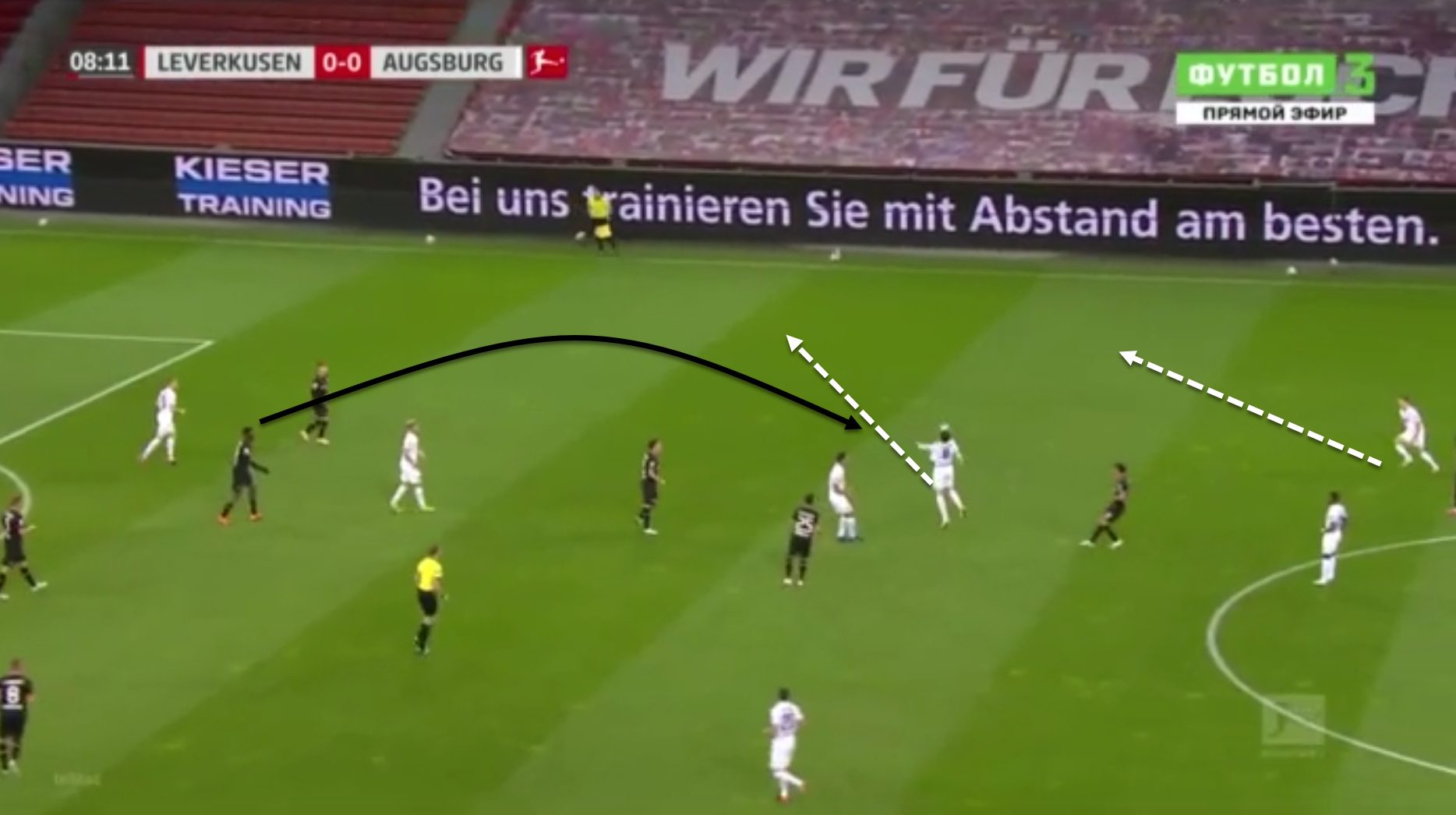 Firstly, we can see the effectiveness of their long ball in the early stages of the match above. Uduokhai plays a long pass into the Leverkusen third and after two defensive headers from Leverkusen, Gregoritsch can receive the second ball and drive into space on the right side. One long ball was able to progress the ball into the final third. Yet, this was not used enough for the rest of the match and when they did look to play long they were often not able to compete for the second balls.

When Augsburg looked to progress through the thirds, a mixture of poor mistakes on the ball and a good press from Leverkusen made progression, for the most part, difficult. Leverkusen’s PPDA was 9.7 and we can see an example of their high press against Augsburg below. 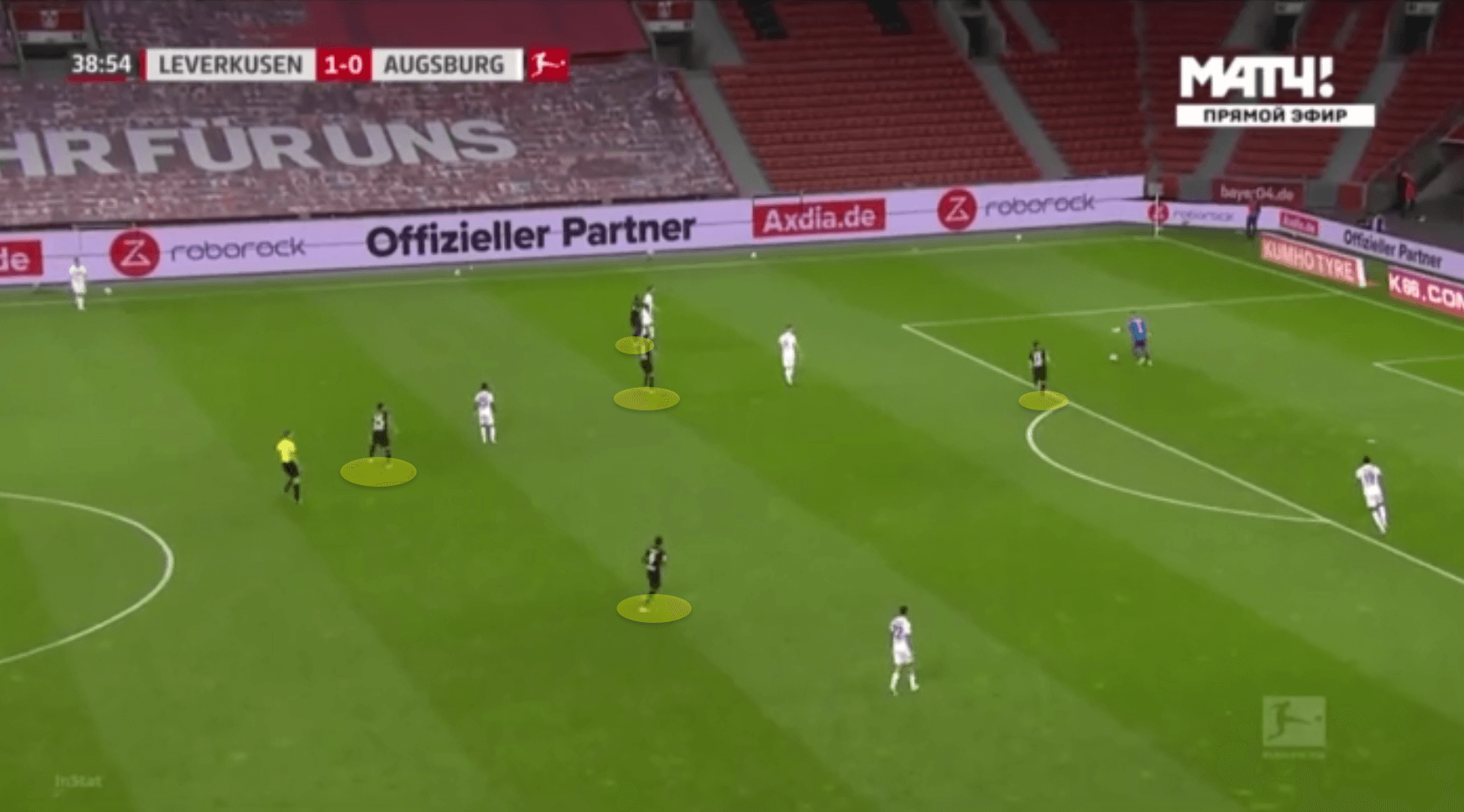 However, mistakes in possession also played a part in the poor progression and ball retention that Augsburg had. The passing accuracy for the side was 78% for the match but just 67% when only looking at forward passes. This ultimately meant they did not sustain pressure against Leverkusen, in fact, they had just 13 possessions that were longer than 20 seconds throughout the match. 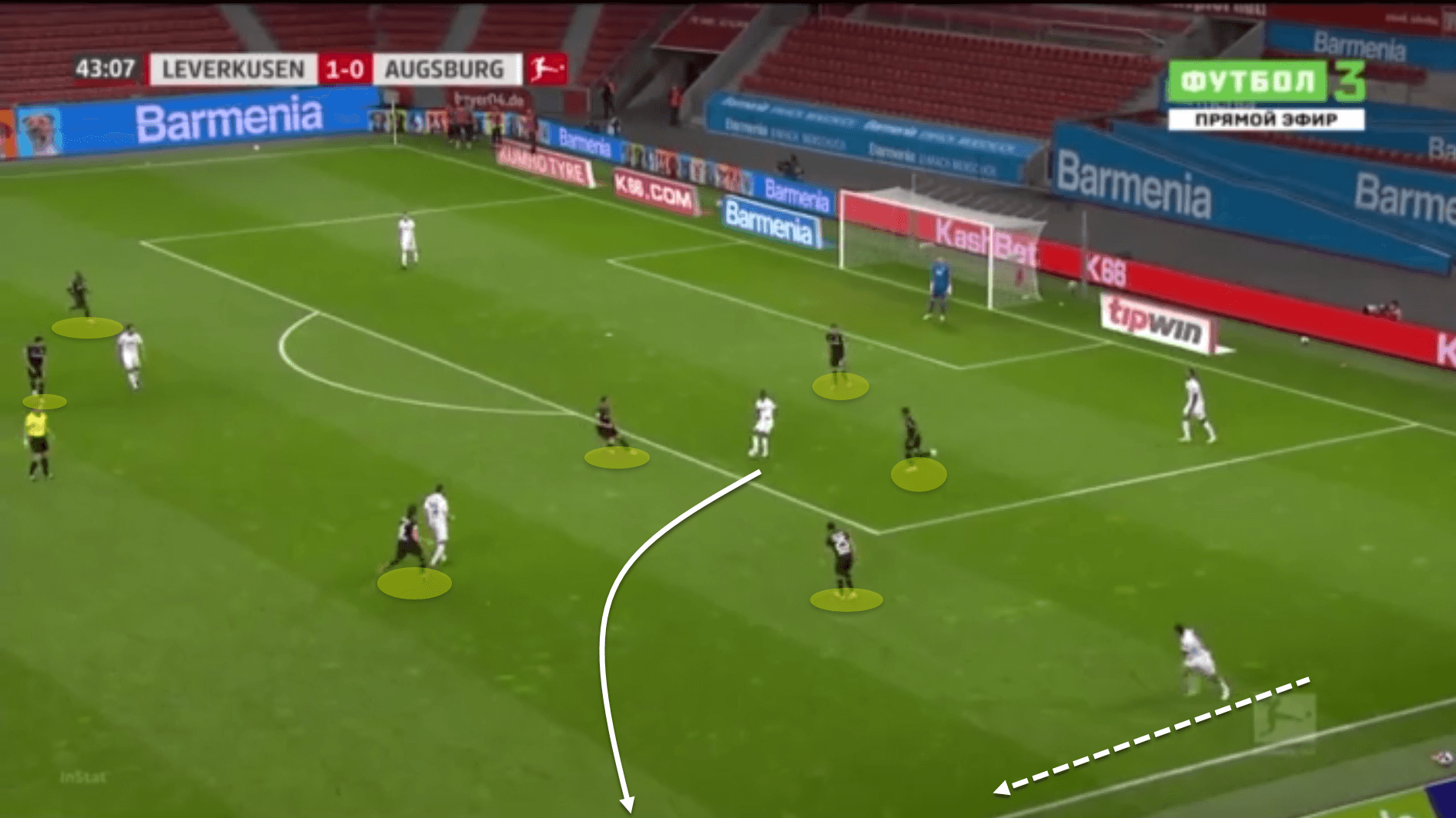 In the image above, we can see Leverkusen pressing Augsburg high after they played the ball short from a goal kick. Gruezo had the ball in his area and there was a clear passing opportunity towards Iago on the left flank – this would’ve broken the high press from Leverkusen and would’ve also taken seven opposition players out of the game if the ball was played correctly. Yet, an overhit pass meant that Leverkusen won a throw-in and could continue to dominate possession and territory. 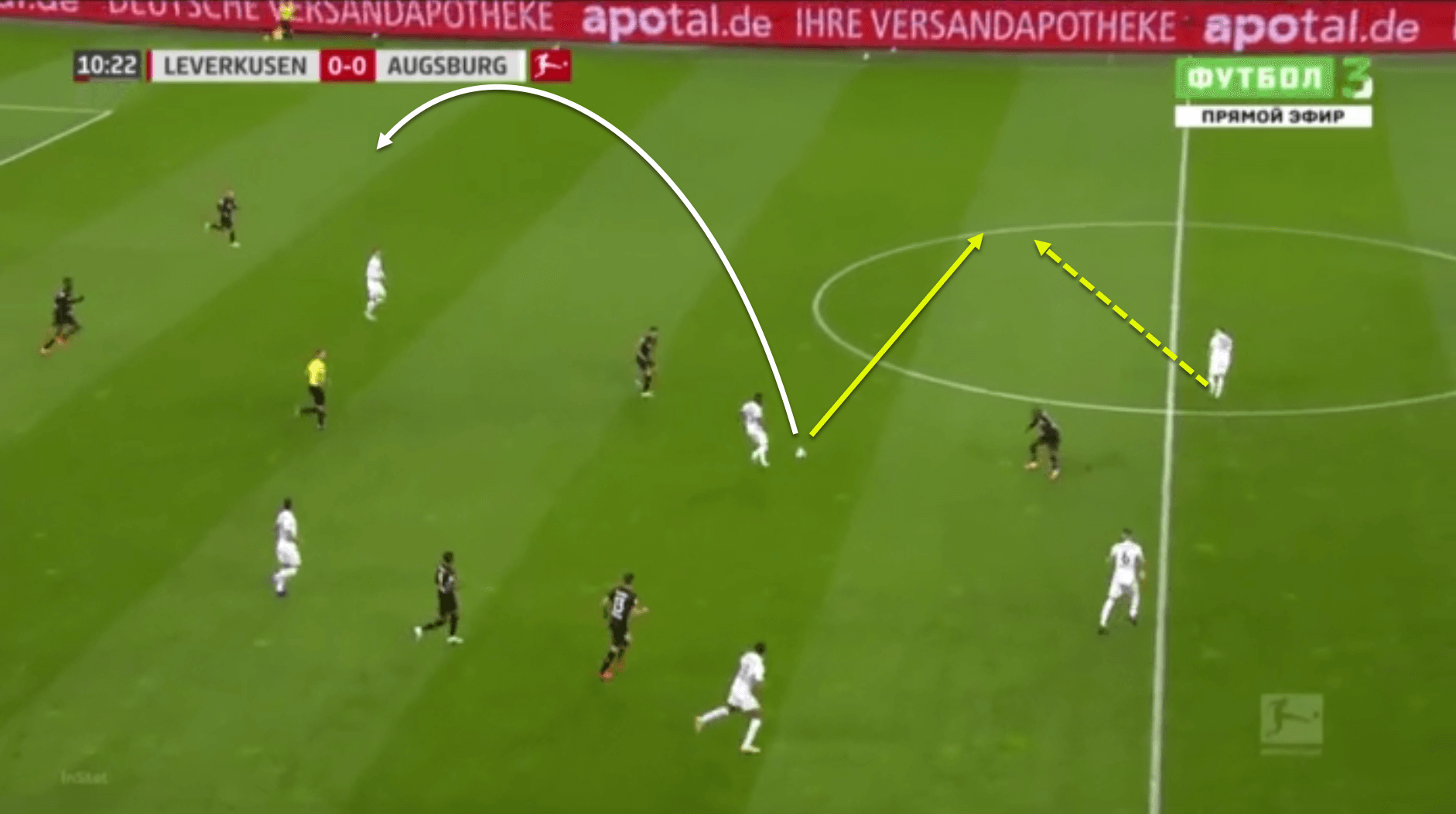 Again, in the image above a lack of quality is shown from Augsburg in possession. The ball comes back to Gruezo again, this time in the second phase of play. As the ball bounced towards him from the left side, Gruezo should’ve looked to retain possession and stretch the pitch by playing the ball towards the right for Framberger to run onto. Instead, he attempts a lofted pass towards Gregoritsch but it is again overhit and there is a turnover in possession.

Ultimately this allowed Leverkusen to control large periods of the match and made it easier for them to sustain pressure against the Augsburg defensive structure. While there was an improvement in the second half due to a transitional threat, Augsburg ultimately did not test Leverkusen’s backline enough throughout the match.

Augsburg’s dangerous transitions in the second half

At half-time, Herrlich made a double substitution bringing Ruben Vargas and Fredrik Jensen for Hahn and Gregoritsch. The addition of Vargas, particularly, brought an extra runner into the side; in the 45 minutes he was on the pitch, Vargas had 10 carries and had a progressive distance of 54 yards; in comparison, Hahn had just 3 carries with a progressive distance of 1 yard. It was clear that Augsburg changed their approach and focused on making runs into the final third and overloading the opposition in their defensive transition.

It was not just on the ball though, in transitional situations in the second period, Augsburg committed many men forward and would have multiple runners looking to go beyond the Leverkusen backline, which was not so secure when in these situations. 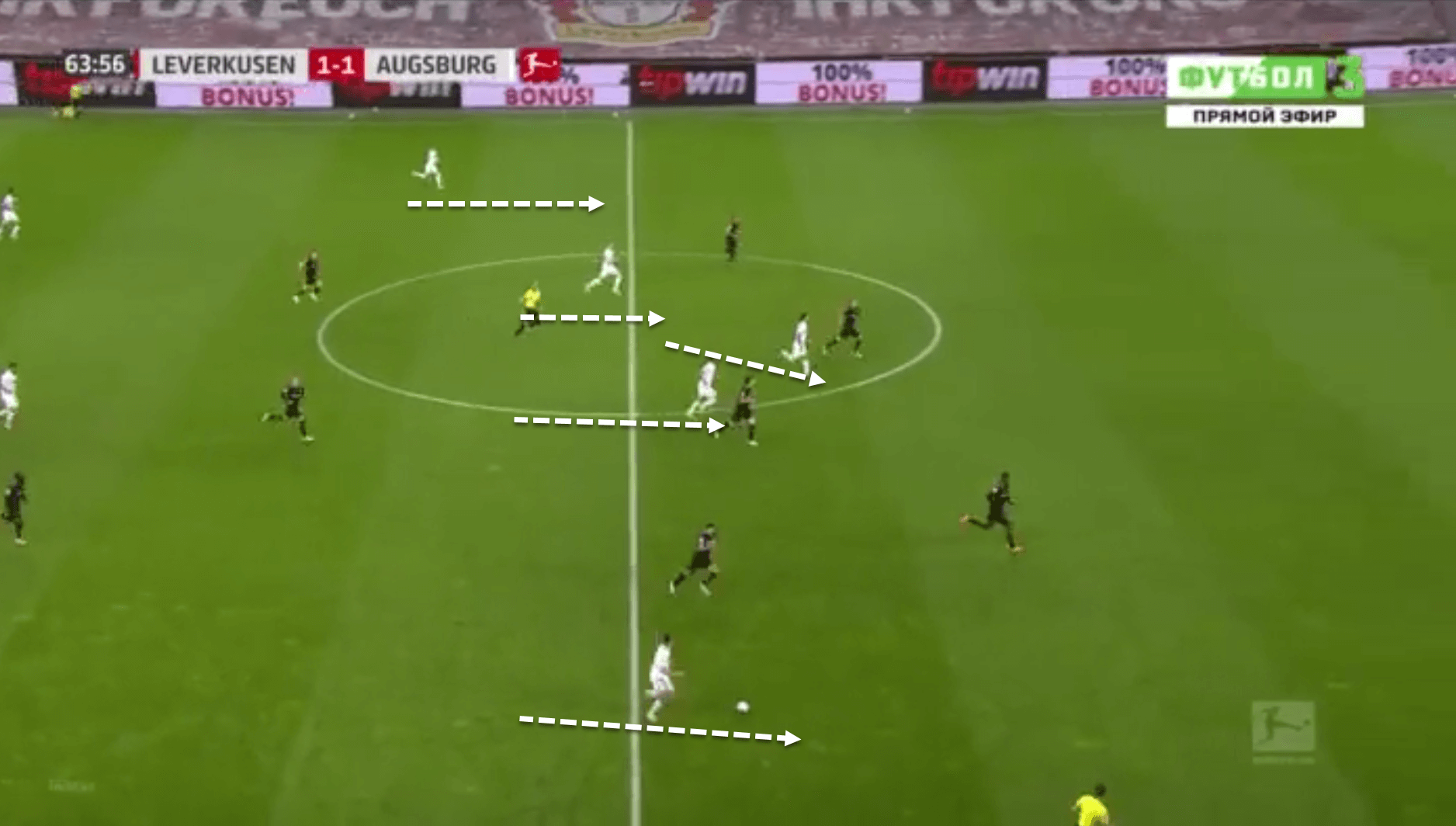 This is a clear example of the increased offensive approach in transitions that Augsburg had. The image above shows Framberger progressing the ball on the right side in transition; he has four other offensive runners against five Leverkusen players. He looked to switch the play in this instance and it was blocked but Augsburg’s intent in offensive transition was clear. 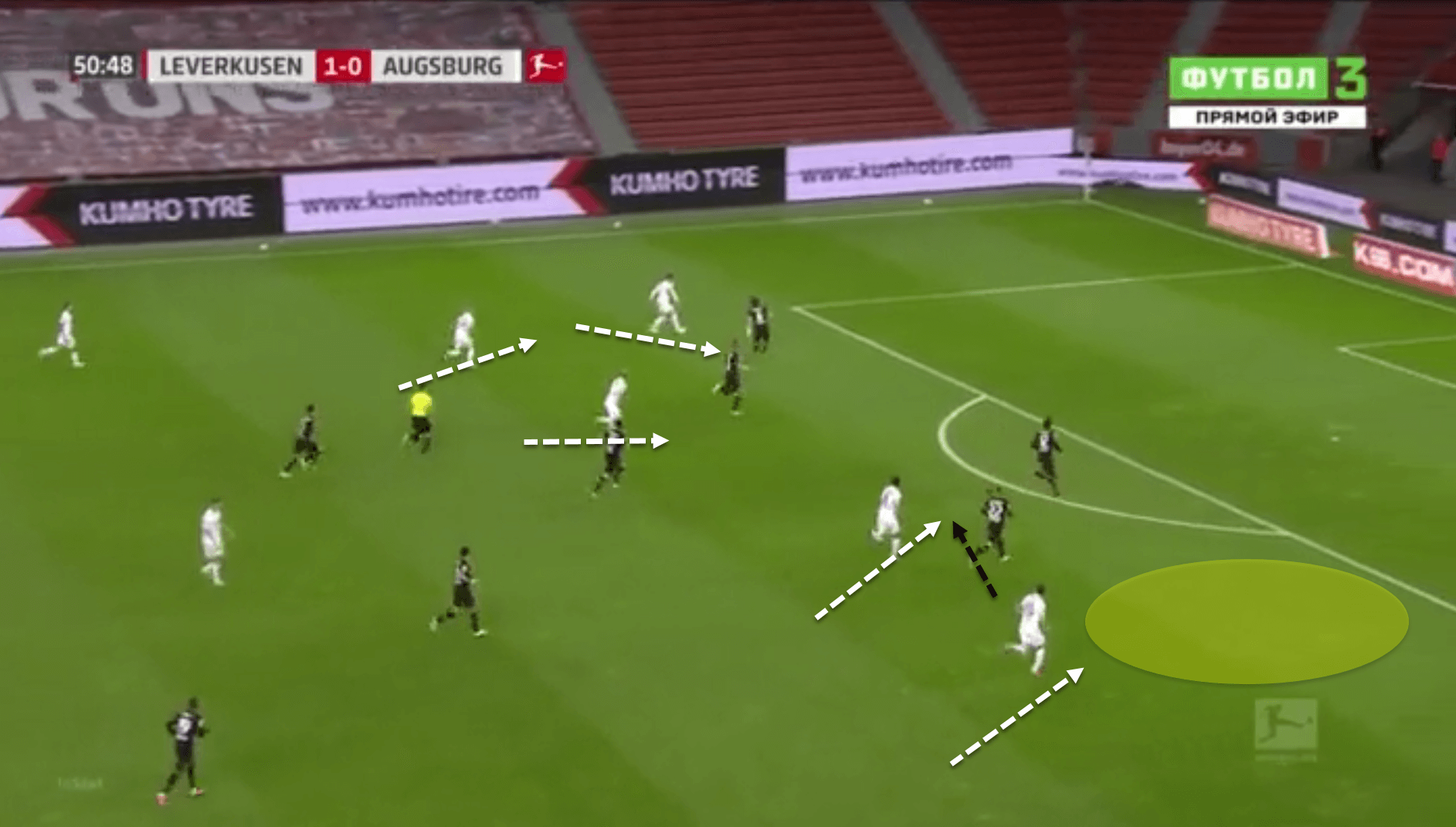 These improved transitions are how Augsburg were able to equalise, in the image above we can see the transition before the goal. The ball is played out towards Vargas on the left side, he begins to come inside and has four different runners to pass to. Khedira’s running towards the centre drags Sinkgraven and leaves space for Vargas to find Caligiuri on the right, he then finishes at the near-post thanks to the space created by the extra runners.

From the 45th minute to the 65th, Augsburg looked strong and potentially could’ve gone into the lead. Yet, as I will now discuss, their defending of set-pieces was poor and how Leverkusen took the lead for the first and second time.

Ultimately, what decided the game was two set-pieces which Leverkusen would score from. The first goal was a penalty and came after a handball from a Leverkusen corner and the second was a direct header from a free-kick. It will now be analysed what went wrong in these two defensive situations. 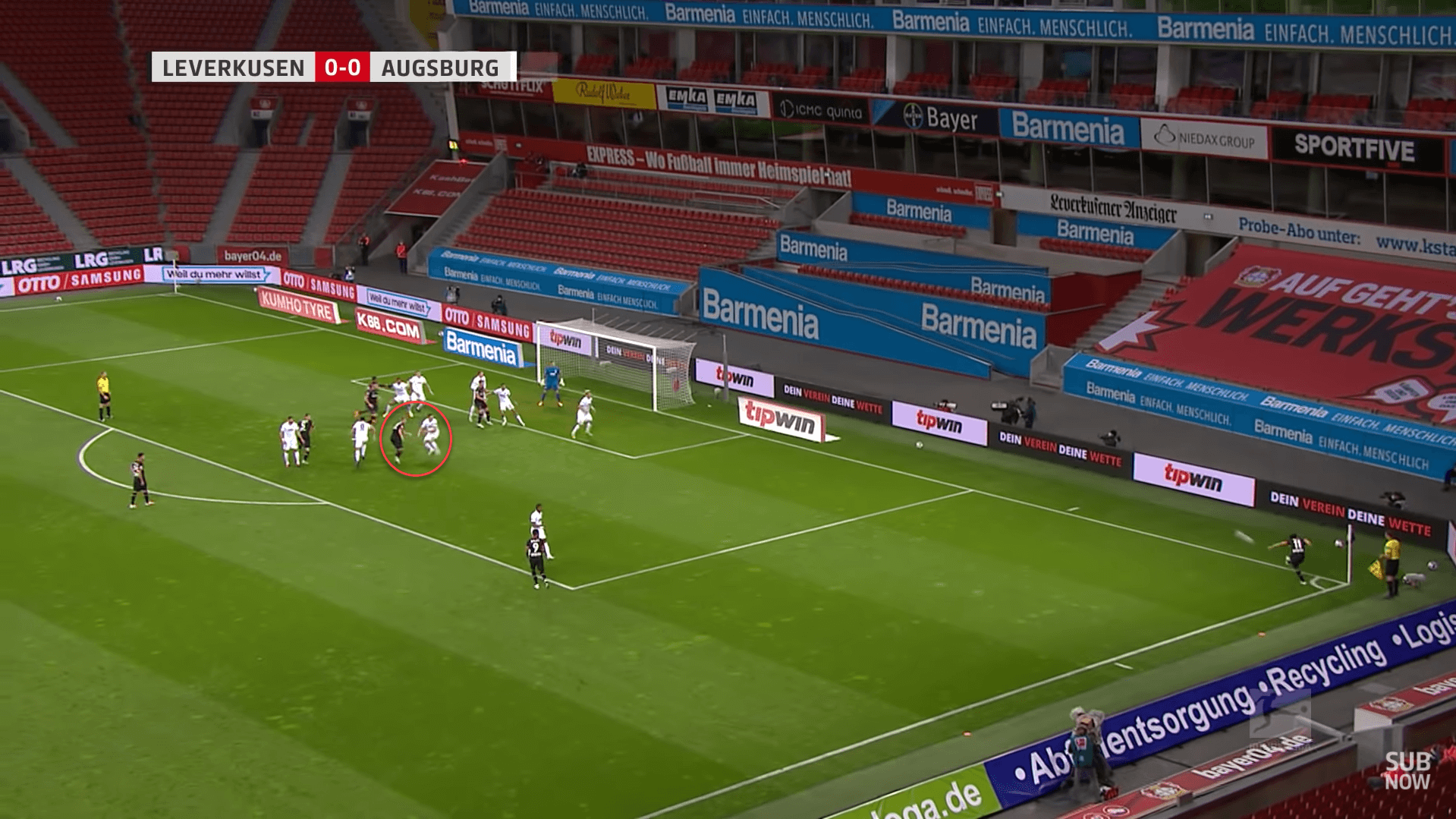 The image above is taken from the corner which led to the handball and penalty for the first goal. We can see that Framberger and Khedira are meant to be blockers, while Augsburg have four men lined across the six-yard box. Both of the blockers fail at their job, we can see Khedira has lost his man, who’s starting to make a run towards the back-post. Circled is Franberger, he is initially tight to his man and in a good blocking position; however, just before the corner is played, Lars Bender (his marker) creates distance between them by pushing Framberger backwards, this space allows him to attack the six-yard area. In a panic, Framberger jumps backwards towards his area with his arms in the air and gives away a clear penalty, which Alario converts.

The clear problem which caused this penalty was the fact that neither of Augsburg’s blockers could prevent their men from entering the danger area; although, Alario won the header from the corner too and was fairly unchallenged in doing so. 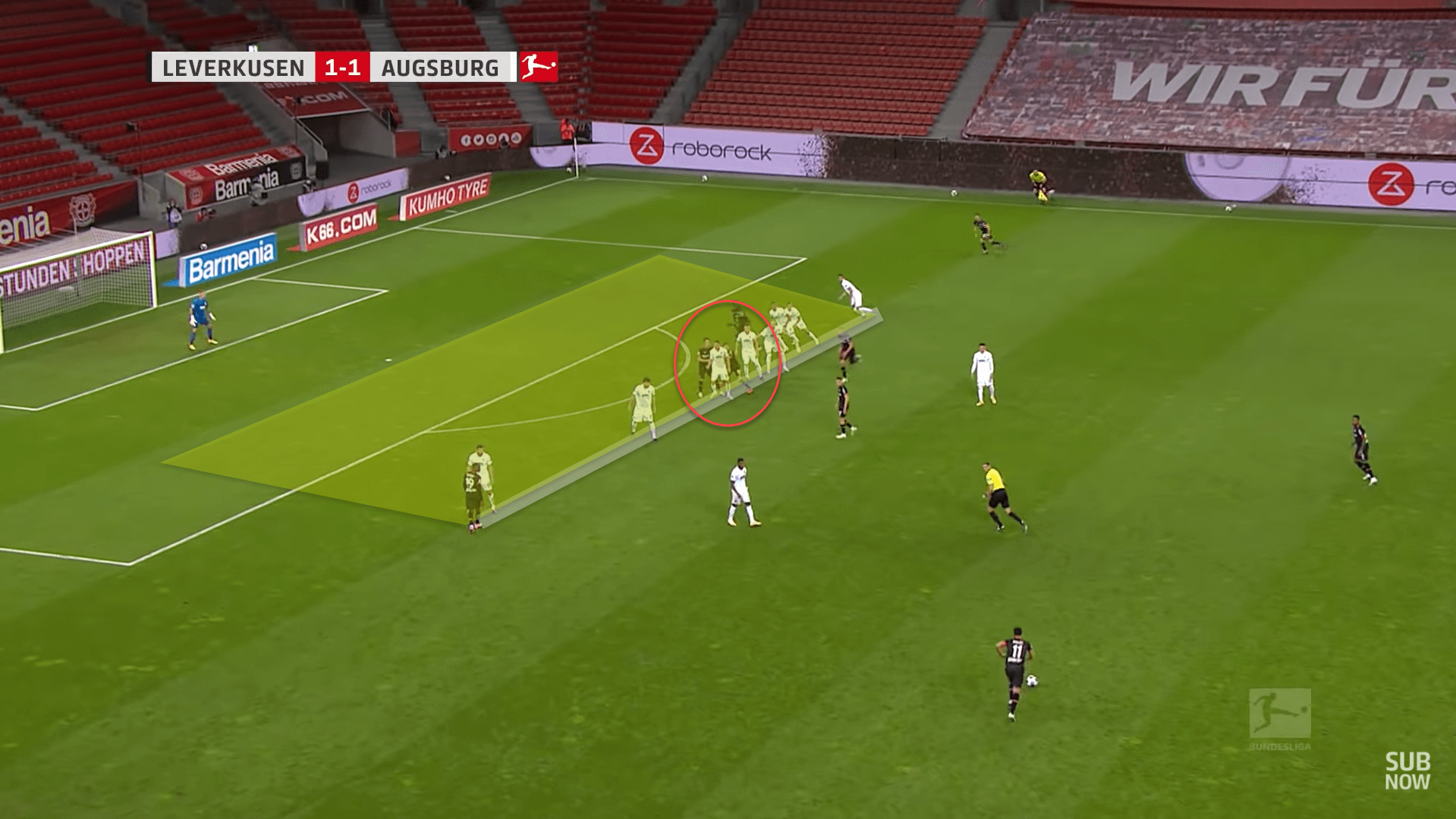 This image above is taken seconds before Leverkusen scored their second goal of the match, the goal which turned the tie back in their favour. As you can see, Augsburg are operating with a slightly high line, this is not a problem initially, however, once Tapsoda makes an early run beyond the defensive line; he was followed by multiple Augsburg men, making their high line more easily bypassed.

Alario found a space in between two defensive Augsburg players, this is circled in the image. Baumgartlinger blocks off Framberger from following Alario and Gouweleeuw was unable to challenge him as Alario made a movement which put him goalside of Gouweleeuw. This movement allowed Alario to be unmarked but Gouwelleuw and Framberger shouldn’t have allowed the spacing between them to be so large; Augsburg’s line was also not strict enough and both of these factors led to the goal being scored by Alario.

This was an interesting match, as we saw Leverkusen’s usual patient build-up and some great use of wide combinations. It seemed that they were going to easily win the fixture at the end of the first half, but impressive improvement due to the transitional threat from Augsburg led to them equalising and looking the most likely to take three points. This was until Augsburg made their second defensive mistake from a set-piece and they were punished by it. Then in the dying seconds of the game, Leverkusen scored a third, while Gikiewicz was up the field, which settled the tie.

As always it was interesting to analyse Bosz’s side but there are some positives to take away from the match for Augsburg and Herrlich. This victory took them into fourth place in the league, behind Borussia Dortmund, Bayern Munich and RB Leipzig.