RB Salzburg has had a very impressive start to the season, with only one defeat in all competitions, which came on Tuesday night away at Wolfsburg in the Champions League. Salzburg is led by 33-year-old Matthias Jaissle, the German coach who has had big shoes to fill replacing Jesse Marsch who has moved onto pastured new in the Bundesliga however the man being dubbed the new Julian Nagelsmann has had an impressive start to life in Austria. Salzburg is sat top of the Austrian Bundesliga with 35 points from a possible 39 and are 12 points clear of the nearest challenger Sturm Graz. They also sit top of their UEFA Champions League group with seven points. This tactical analysis aims to provide a scout report and analysis of RB Salzburg and discover the tactics that have led to an impressive start of the season. Like with all Red Bull teams, Salzburg has a clear identity in how they want to play, which has been heavily influenced by Ralph Rangnick and his tactical principles. Within this Salzburg, there is also an abundance of young talent, some of which will be very hard for Salzburg to keep hold of in the long run. Salzburg’s dominance in the Austrian Bundesliga is shown below with them leading the way in both XG and XA total. 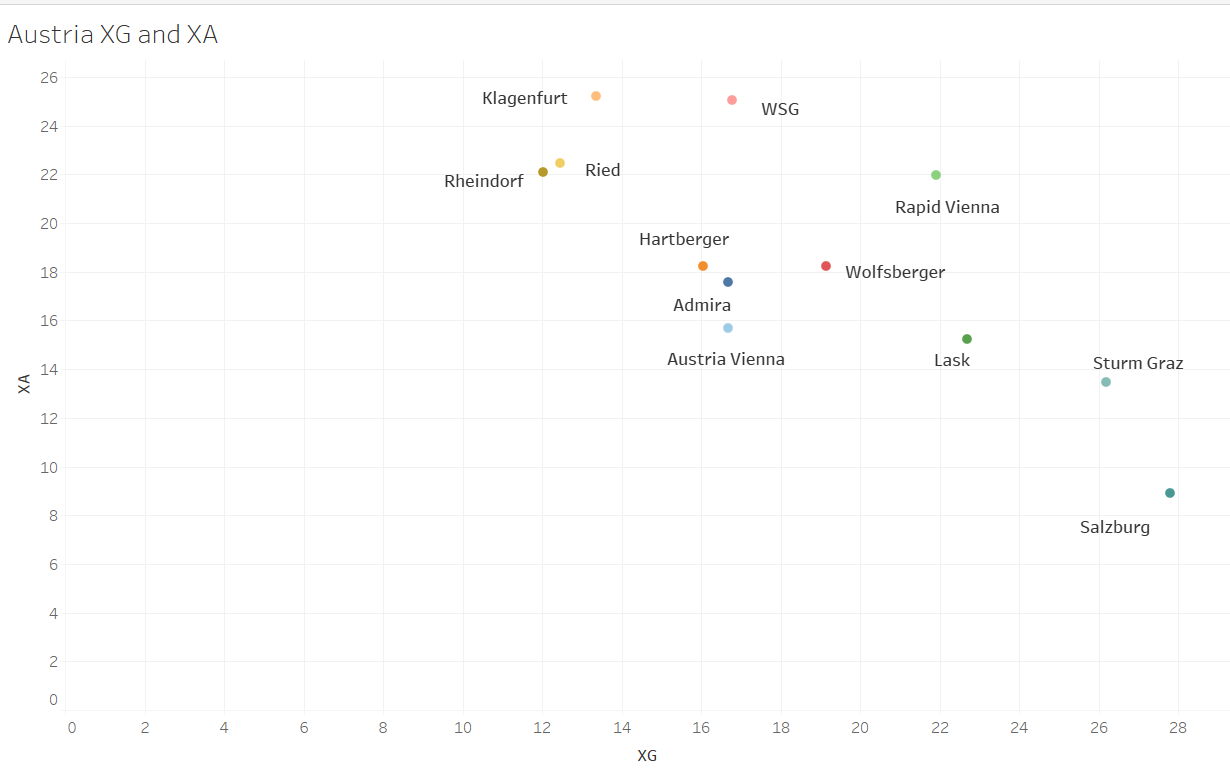 This season Salzburg have often used a 4-3-1-2 system although this is sometimes shown as a 4-4-2 in the media, it plays as a 4-3-1-2. The back four has mainly consisted of Kristensen, Onguene, Wobler and Ulmer with Kohn in between the sticks. The midfield usually consists of Camara as a single pivot with Siewald to the left and Sucic to the right and Aaronson in the 10 role, there is versatility with the midfield options. Capaldo has also featured this season usually in replacement of Sucic, however, Capaldo will play on the left and Siewald will go to the right. The front two have mainly been made up of Okafor and Adeyemi.

A key feature of Salzburg’s attacking play is their use of direct and vertical passing. Within modern football, the idea of being direct with your passing is something you associate with old fashioned managers playing long balls into a target man however it is quite the opposite Salzburg look to use the pace of Adeyemi and Okafor to get in behind teams. In possession, Salzburg likes to push their full-backs high and wide, with the outside midfielders going wide also with the aim of creating an overload in the wide area, as shown below where Siewald has drifted left to allow Ulmer to get even higher. Salzburg is looking to progress the ball through three options. One to the full-back, two to Aaronson and three over the top to one of the strikers. This makes life very hard for the defence, as if they drop deep to combat the ball over the top it leaves Aaronson in a dangerous pocket of space, if they drop the midfield block deep and combat it means they can progress the ball via the fullbacks. This is a great example of Salzburg wanting to manipulate space. Here is Salzburg in their usual shape in possession 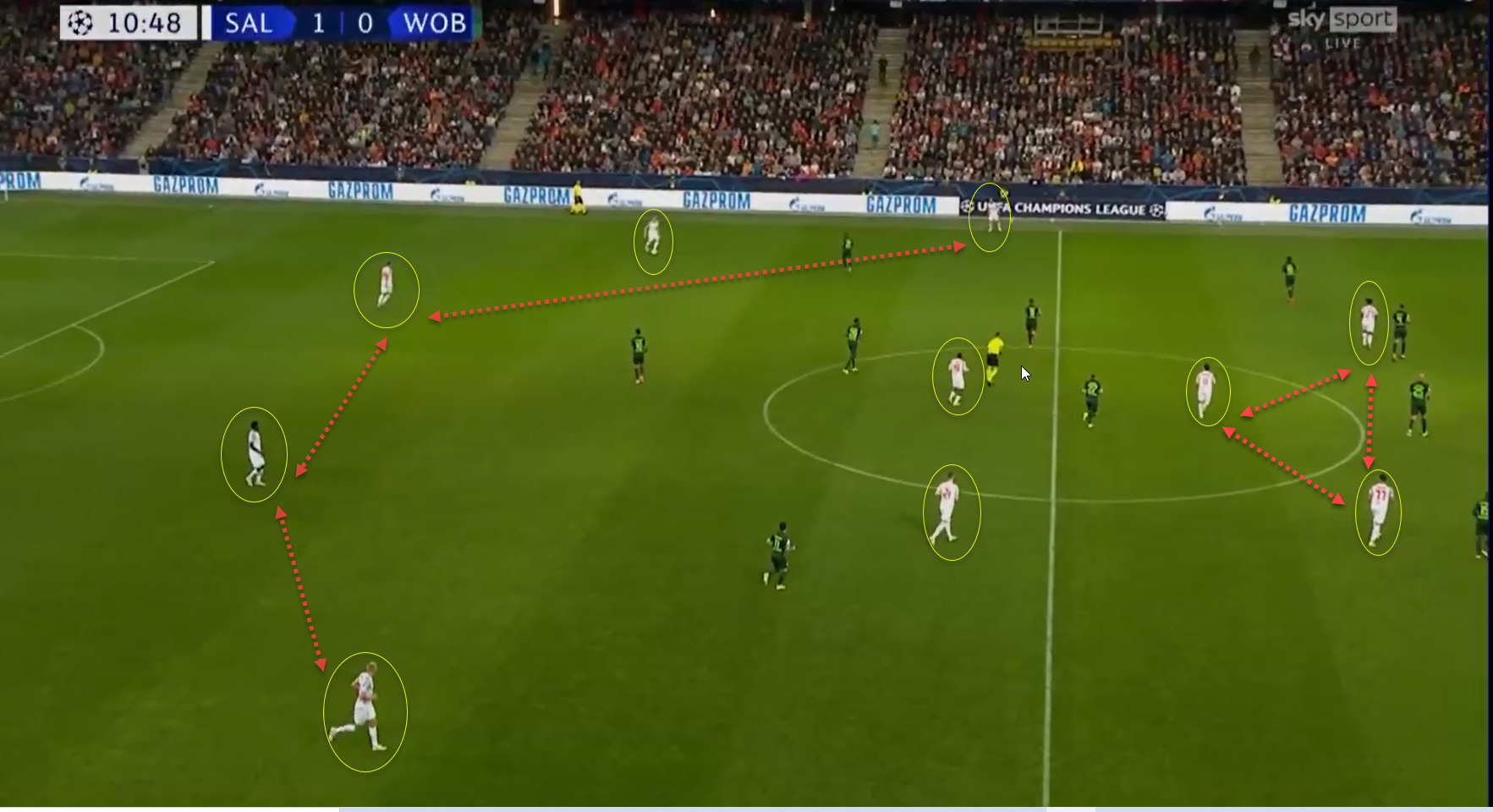 As Salzburg have worked the ball right now back left Wobler is looking to step in. As Siewald has dropped almost into the left-back slot it has drawn Baku out of position and high. This then creates an opportunity for Adeyemi to drop into the pocket of space highlighted, as he does this Aaronson rotates in for him.

Below is the final picture you can see how Salzburg has managed to disjoint the Wolfsburg backline, with the right back pressing up to close down Ulmer, the right-sided Centre back closing down Aaronson which leaves a big space for Siewald to play the ball into for Okafor. He manages to get hold of the long ball and rattles the crossbar with effort but brilliantly shows us Salzburg’s attacking shape and use of direct passing.

Another strong feature of RB Salzburg’s game is their ability to transition quickly and efficiently. They display a great ability to go from defence to attack in a matter of seconds using both direct passing and quick runners. From the moment of turnover, Salzburg look to move the ball forward in the quickest means possible, if this is by playing the ball forward, they will do so, if this is by carrying it forward, they will do so. This is also partnered with the commitment of lots of bodies forward to look to make the most of the opposition. When a team has just lost the ball they are in their most vulnerable defensive position, as everyone is positioned with attacking in mind.  Below you can an example where Salzburg have just recovered the ball after a loose Sturm Graz pass, as they are deep in their own half and with Strum Graz having a player near all available passing options, Siewald chooses to play it long.

Okafor manages to gather the ball and play a wonderful backheel to Kristensen. Who has acres of space to carry the ball into and eventually slots past the keeper. From the moment Siewald gather the ball to the moment the ball hits the back of the net, it took a total of 13 seconds, showing brilliant use of direct passing and willing runners. 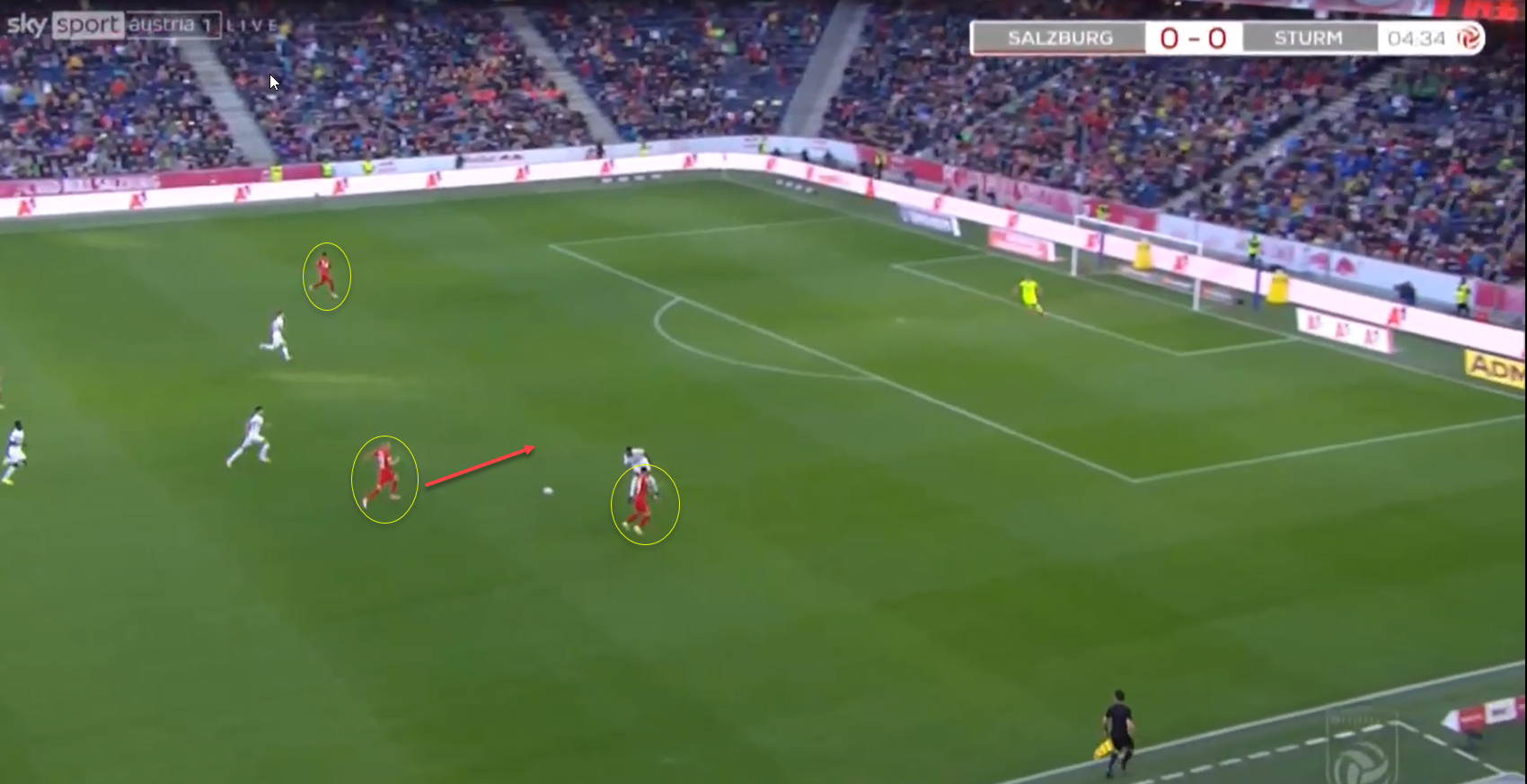 Salzburg utilizes two types of pressing, one is a high press which is where they try and press the opposition high when they are looking to play the ball out from the back, the second is a counter-press this is when they lose the ball, they look to win it back immediately. This is what we typically see from Red Bull teams as they are so heavily influenced by Ralf Rangnick. Rangnick’s ideas are influenced by data they discovered back in 2006, where they found that the biggest chance of scoring is within 10 seconds of losing it yourself and secondly the biggest chance to win the ball back is within 8 seconds of losing it, both help understand the importance of counter-pressing.

When Salzburg lose the ball, we usually see a highly aggressive counter-press. The aim I to surround the man/ball with as many bodies as possible with the aim of forcing the opposition into a turnover. There are two benefits to this approach firstly, the opposition doesn’t have the ball but also it often leads to turnovers in dangerous areas of the pitch which can then be used to create dangerous chances for Salzburg. Below the graph shows PPDA and challenge intensity, Passes per defensive action (PPDA) show how many passes the opposition make before a defensive action by the opposition is made, the lower the PPDA the more a team presses the opposition. From the graph, we can see that Salzburg are one of the best pressers in the Champions League with only Liverpool, Chelsea, and Sevilla. Challenge intensity measures the amount of Duels, tackles and interceptions per minute of opponent possession. Again this highlights a team tendency to press, RB Salzburg leads the Champions League when it comes to challenging intensity. 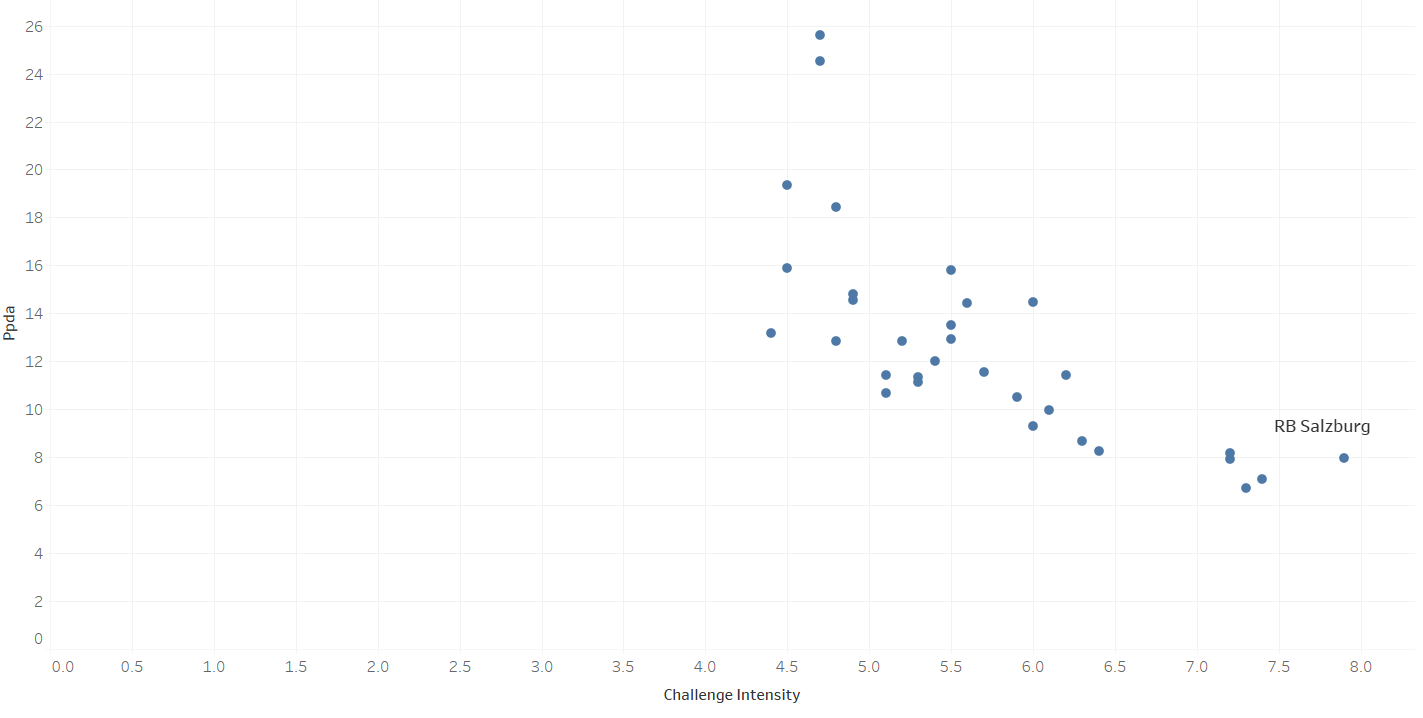 When pressing the opposition high, usually from goal kicks, Salzburg split Okafor and Adeyemi to go and press the two centre backs and goalkeeper, this is then followed by the outside midfielders going to press the fullbacks. Aaronson will press and occupy the sitting midfielder. The aim is to turn the ball over by either winning a duel or interception. Below is a great example of how Salzburg will look to press, Adeyemi and Okafor will start relatively narrow and press outwards. Here the keeper has played the ball to the left centre back and now Okafor is going to close him down, Aaronson is looking to follow the sitting midfielder and Sucic is looking to press the left-back. 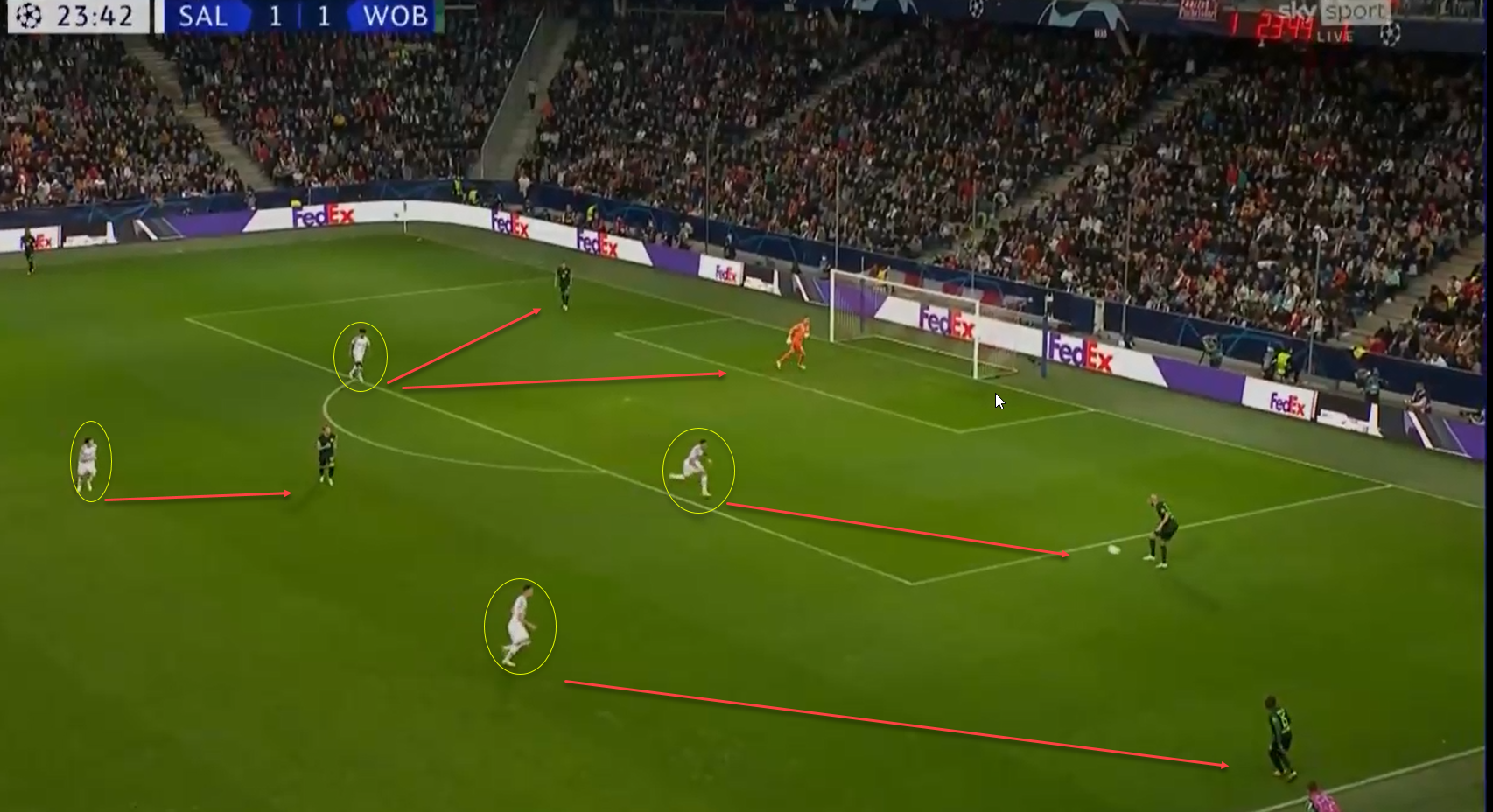 Now we can see how Salzburg has managed to take away Wolfsburg’s passing options, this is why Okafor start narrow as this forces the left centre back wide and then the team can narrow off his passing options. 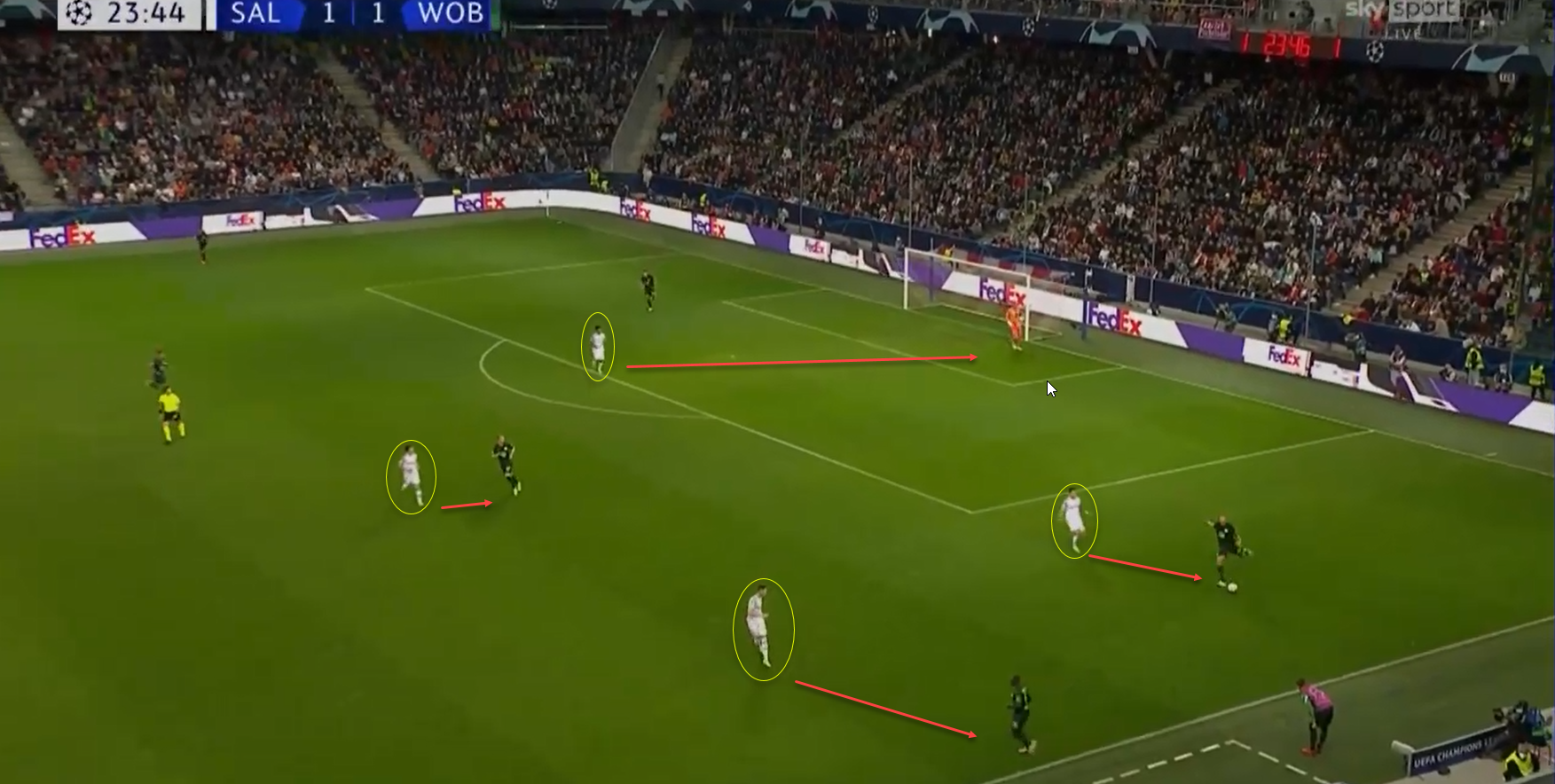 This led to the Wolfsburg player, knocking the ball long for the Salzburg centre backs to recover.

As already established RB Salzburg are very efficient counter pressers,  when they lose the ball they look to surround the opposition and win the ball back ASAP. Here you can see that Wolfsburg are about to regain possession after the ball has looped in the air before they even gather the ball Salzburg are looking to regain the ball, Kristensen and Sucic are making runs to the ball. 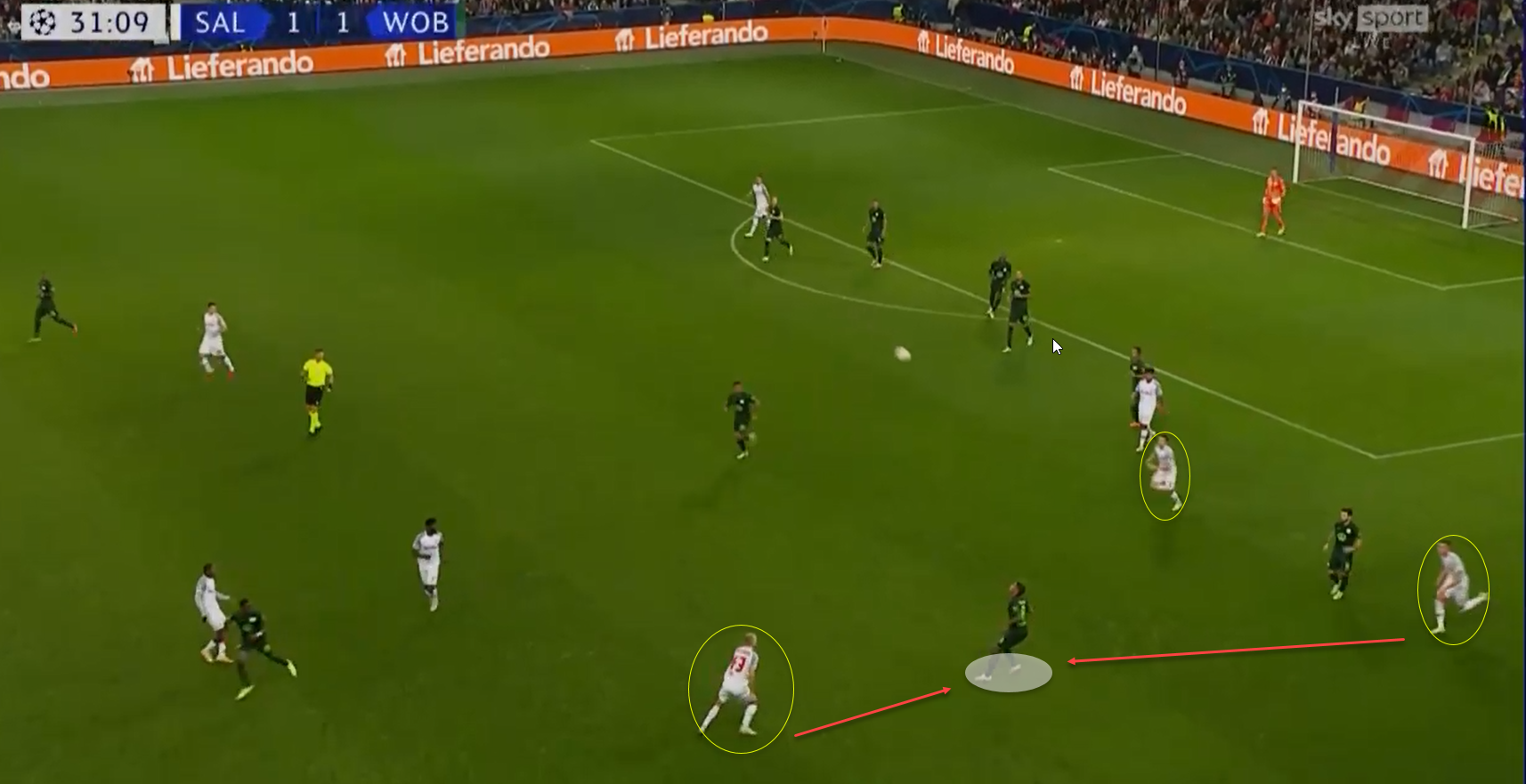 As the Wolfburg player brings the ball down, he is surrounded by two Salzburg players who are looking to dispossess him. 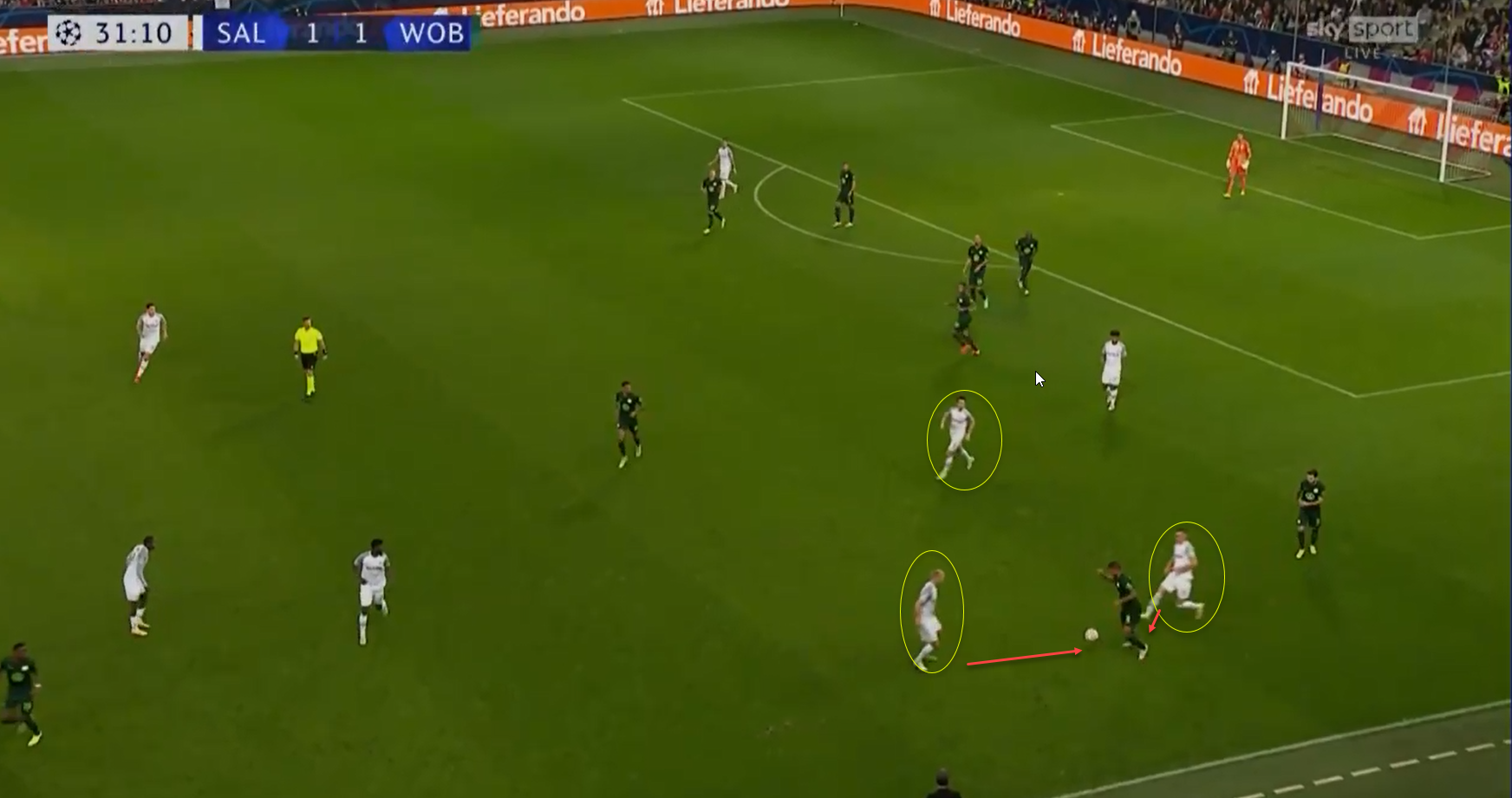 as the two Salzburg players are looking to win the ball back, Aaronson is now looking to press his one passing option. Salzburg eventually forces the Wolfsburg player to play the ball out of play and force a throw-in. This now means Salzburg have possession of the ball in the opposition’s final third.

Matthias Jaissle has assembled a highly effective and tactically proficient outfit that have and may continue to surprise a few in Europe, in addition to dominating Austrian Bundesliga. Using a combination of direct and vertical pressing in possession with high and aggressive pressing out of possession. throughout their play, they show a strong presence of Ralph Rangnick and the Red Bull principles. Jaissle and his players are young and exciting within the footballing world and are on the path to bigger and greater things.