Under former Bayern and Frankfurt head coach, Niko Kovač, Monaco had a good 2020/21 season by making it into third place and participated in a cup final. This won Kovač the best coach in Ligue 1 of the season award, and the project could continue as Monaco kept key players such as Aleksandr Golovin.

While there were high expectations for the 2021/22 campaign, the slow start of Monaco might be a bit disappointing to their supporters. The team recruited Myron Boadu, Jean Lucas, and Ismail Jakobs to strengthen the squad, but they could not make it into the UEFA Champions League group stage. In Ligue 1, they also struggled to produce the same intensity, only recording one point after three games.

So, which part of the tactics were not working? This tactical analysis will delve into some key games of Kovač’s team and see where the team did could improve.

By using the data from Wyscout, we compared the first seven official games of Monaco to their average statistics last season:

As the numbers told, Monaco were more aggressive in the defence this season, as the PPDA dropped from 10.55 to 7.69, which shows their intensity increased. This also resulted in higher possession, from 55.22% to 59.7% suggested Monaco controlled the ball more often this season. This positively reflected in shot per 90, as they had 2.48 more shots per 90 than the previous campaign. However, the improved quantity of shots was not equivalent to improved quality. Despite more shots were taken in each game, their xG dropped slightly from 1.8 to 1.7, while the conversion was not good too. Last season, they scored a few more goals than expected, but now they were seriously underperforming, only scored eight from 11 xG. The underperforming issue also occurred defensively, as they conceded eight goals from 4.34 xG, which was a poor display.

Against Lorient, Monaco rotated a bit as there was an important midweek fixture against Shakhtar Donetsk. The likes of Golovin, Caio Henrique, and Wissam Ben Yedder were rested but Kovač still got a good plan to achieve strategic advantages. 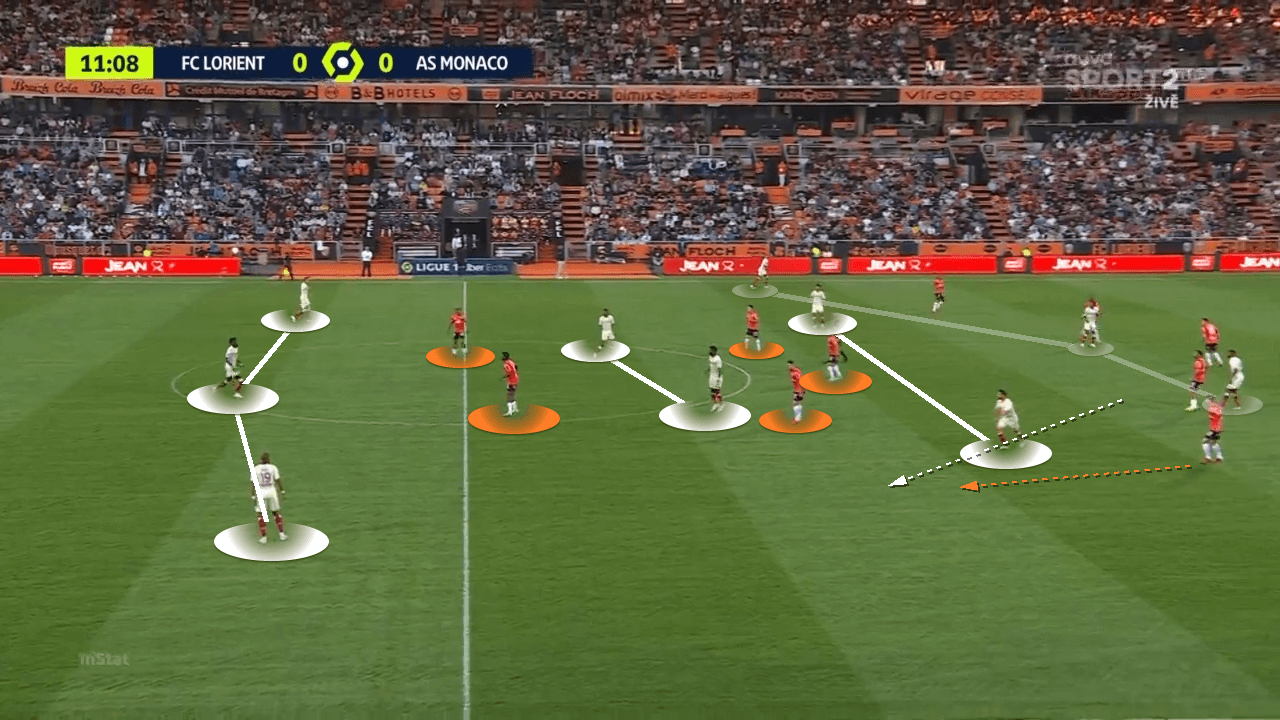 The team came with a 4-2-3-1 on paper, but the full-backs operated asymmetrically and the exact shape was a 3-2-2-3. Theoretically, it was a great plan against Lorient’s 5-3-2, as Monaco had a 3v2 in the first line while enjoying a 4v3 overload in the midfield. You can refer to the shape of the above image. However, things did not work ideally according to the plan.

In that game, Monaco had serious depth issues, width issues, and individual issues that led to too many turnovers in the midfield. Firstly, their high front three (Jakobs, Gelson Martins, and Boadu) were unable to pin the opposition backline. Hence, Lorient defenders always stepped up aggressively from the back to press the closed body receivers in half-spaces. We indicated the situation in the above image as well. 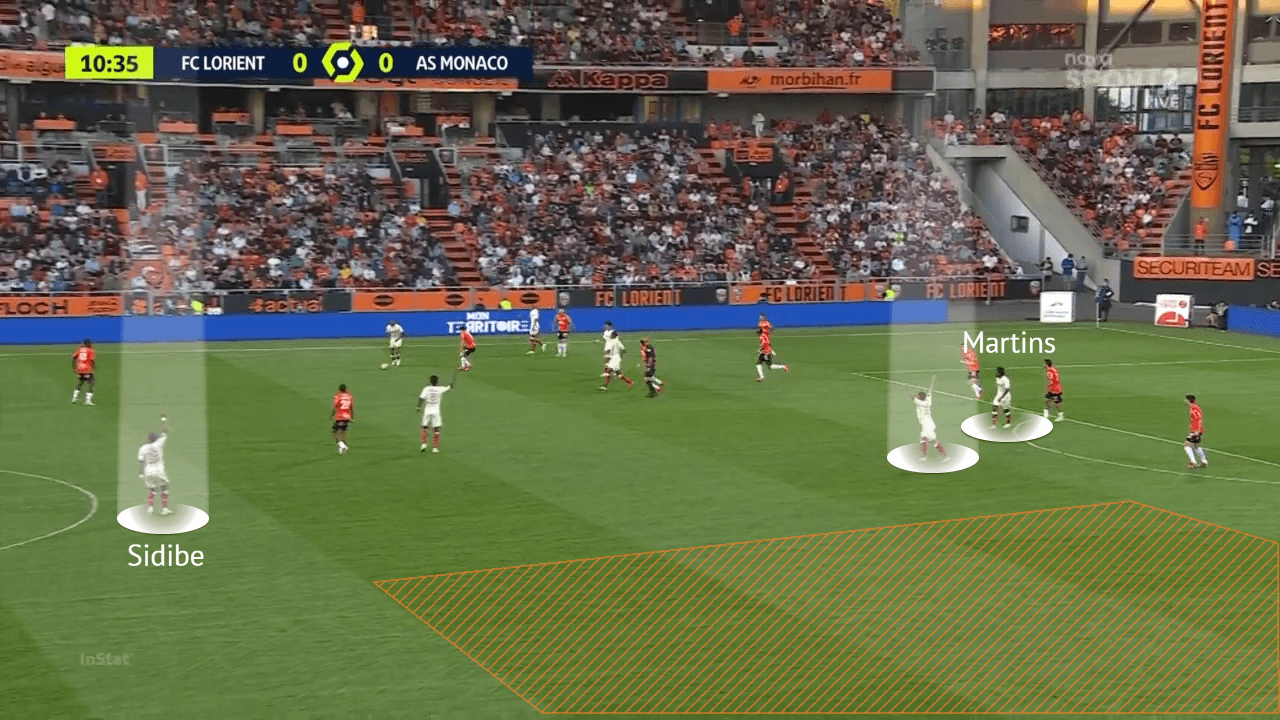 Another issue was the width issues. Since Djibril Sidibé was an inverted full-back that formed a back three with centre-backs, he was in the centre. Peculiarly, Martins was also instructed to get into the centre very early, leaving Monaco’s right flank without any player. That was the part that made things difficult.

For example, when Monaco could not break on the left with the overload, they would want to switch. But now both Sidibé and Martins were in the centre, and no one was using the vacated orange zone. So, the switch went to a no-man zone and Monaco lost the ball. 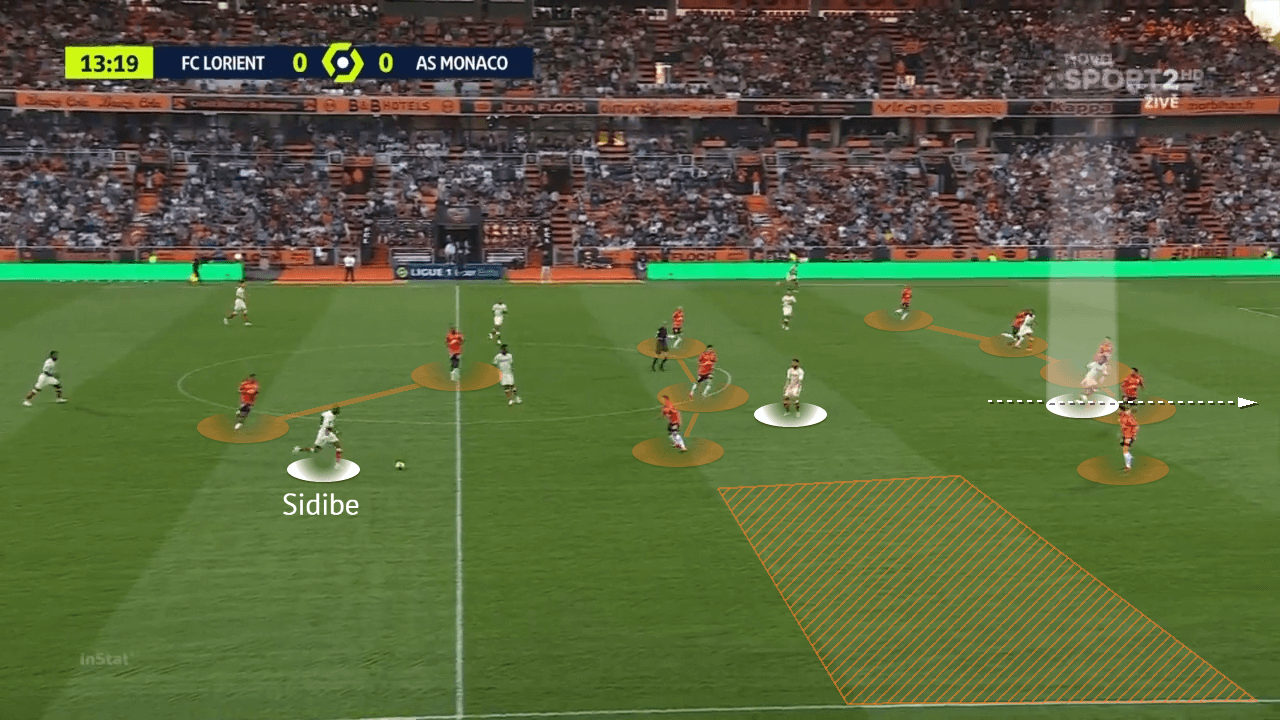 The width issues were not only affecting the lateral/diagonal plays of Monaco, it was also an obstacle of their vertical attacks. They were good enough to break the first line with Sidibé in the 3v2, but the right-back struggled to proceed the attack instantly. The receivers were not in good positions when Monaco entered the middle third.

Here, Sidibé was carrying the ball forward, but eventually slowed down and went the other way as no one was available on the flank. Usually, teams played with inverted full-backs could vacate the diagonal passing lane to a wide winger, but Martins was too narrow in the attack. Even he made a run, he could only receive with a defender approaching from his back. And of course, Sidibé could not pass vertically as the Lorient midfielder already blocked the entrance to Kevin Volland. 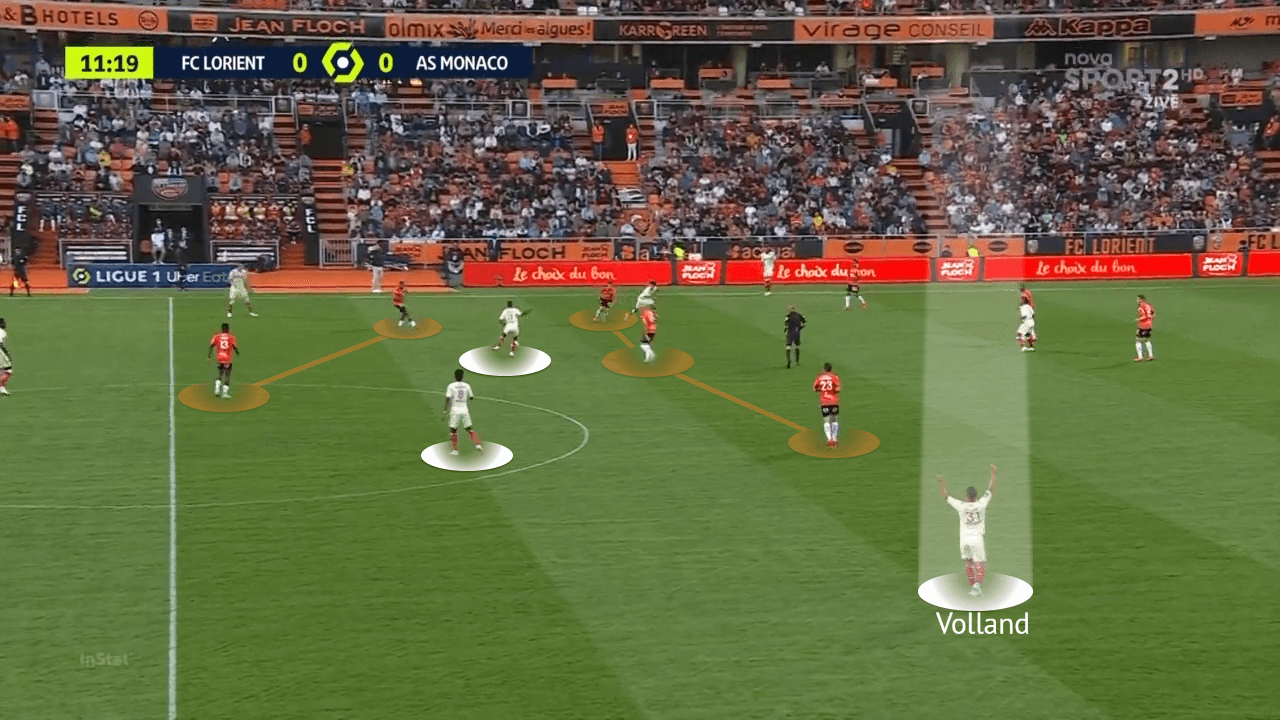 As mentioned in the above analysis, Monaco had a 4v3 in the midfield, but they never made this advantage counted. In the attack, clearly, the deep midfielders had limited visions and techniques in the pocket of space, the attacks were always stuck into one side because of poor receiving body shapes.

In the above situation, Volland was clearly the free player, he was waving his hands. However, Lucas was rather vertical and quick to hit into the ball half-spaces, which was more crowded. If Monaco wanted to go out on the left with an overload, they should also pay attention to spaces on the right too, as spaces must be there when the oppositions were drawn to one side. 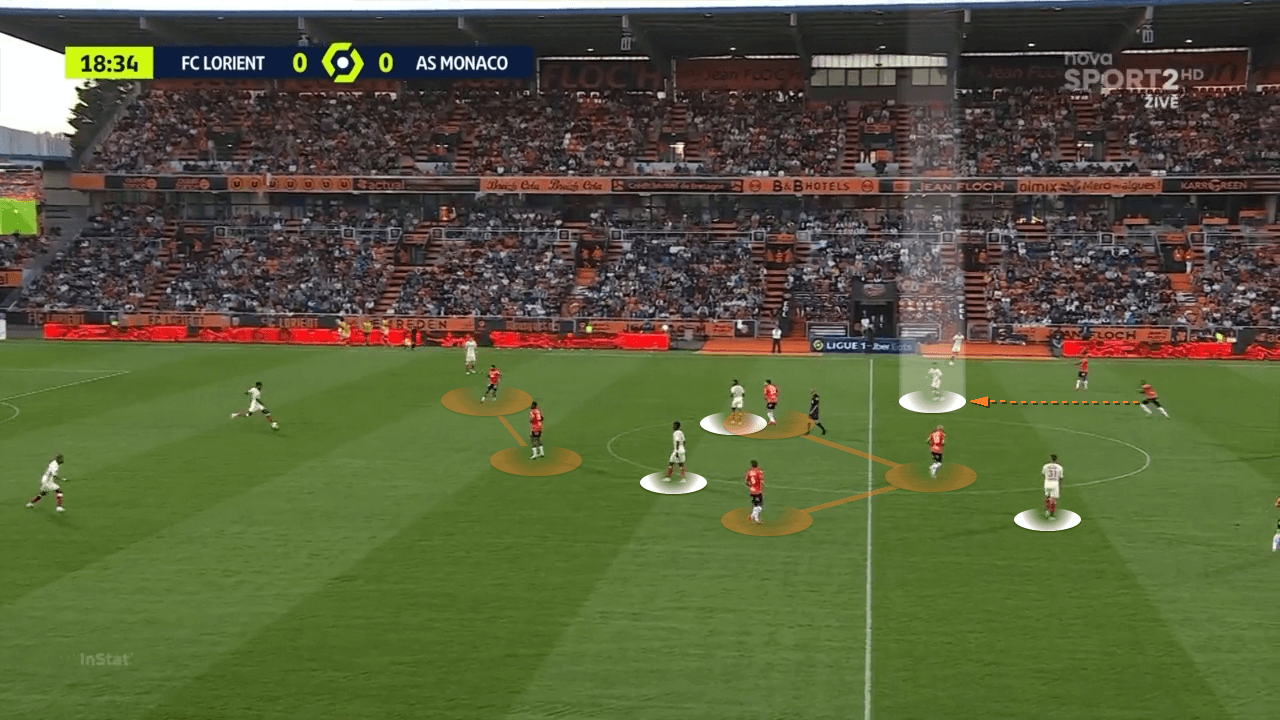 Another reason for their half-spaces struggles was lacking manipulation of the backline. Although there were high front three on the pitch, Lorient did not care about their presence, and simply committing defenders to defend the half-spaces. The same was also seen in the Lens game, where the oppositions were happy to have a 3v3 at the back.

Therefore, Kovač must find a way to constrain the backline so to vacate half-spaces. In the above image, we saw Lorient simply nullified the 4v3 in the midfield as the centre-back jumped onto Sofiane Diop. 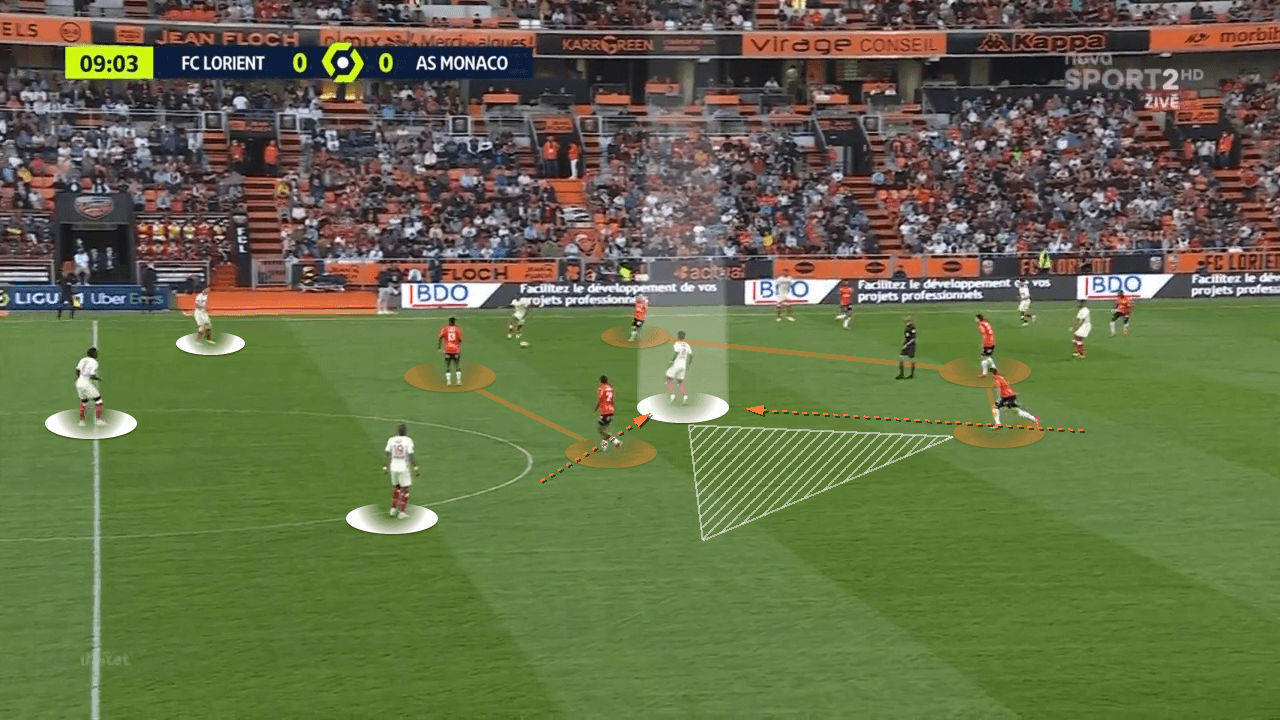 The individual issues were more about the receiving angles and perception of surroundings of midfielders. Despite being tipped as the target of Chelsea in summer, Aurélien Tchouaméni was slightly inconsistent recently, too many transitions came from his poor displays. 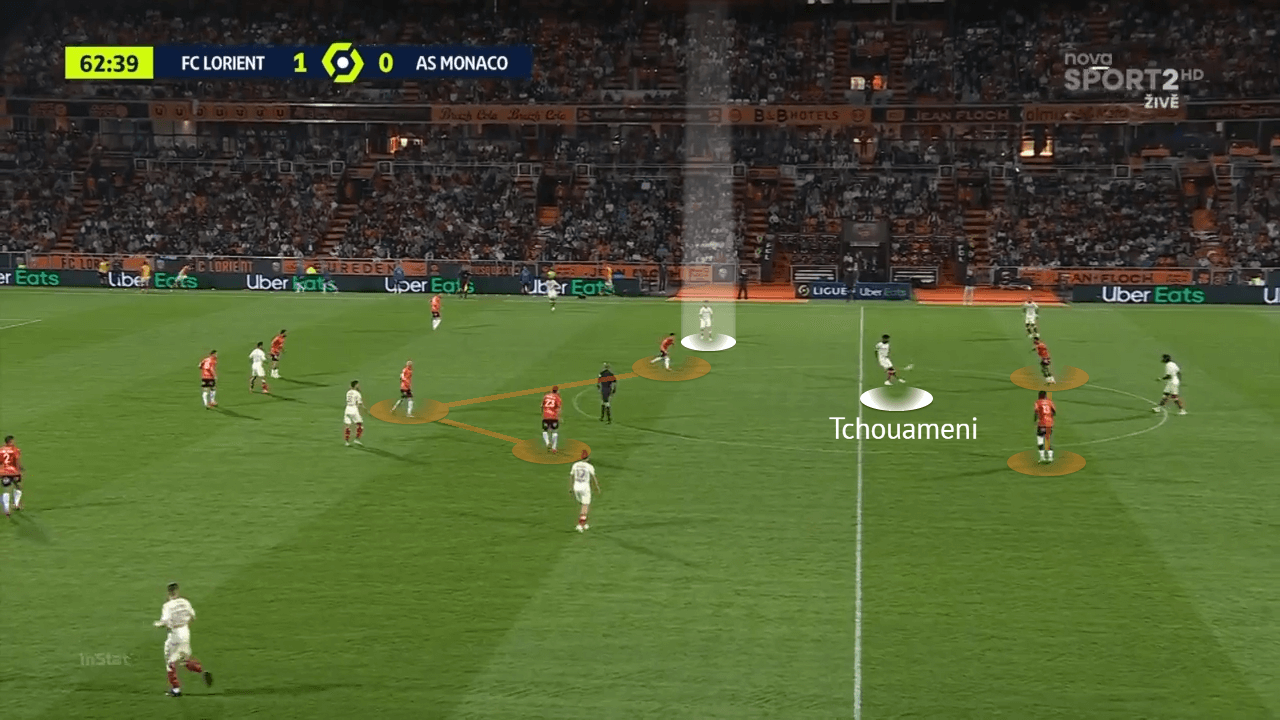 Again, here Tchouaméni received behind the first line, but his body orientation was poor. The 21-year-old midfielder was not good at operating in pockets of spaces, and his action limited the progression of the attack. In this situation, he only went for a suboptimal option (to right centre-back) because of limited perception. His positioning had already triggered the opposition midfielder stepping out of position, and the right half-spaces will be freed. Monaco were not good at penetrating in the centre as the players’ styles were not allowing them to do so.

Of course, Kovač could have his solution by playing other midfielders, such as Youssouf Fofana to link the players on the pitch, but the others should also take more responsibility in organizing the attack as well.

It takes time to find solutions

As we all knew, the results of the first few games were beyond expectations. Kovač also knew that, so the Croatian head coach was searching for solutions. Against Lorient, he tried fixing some problems by in-game adjustments. 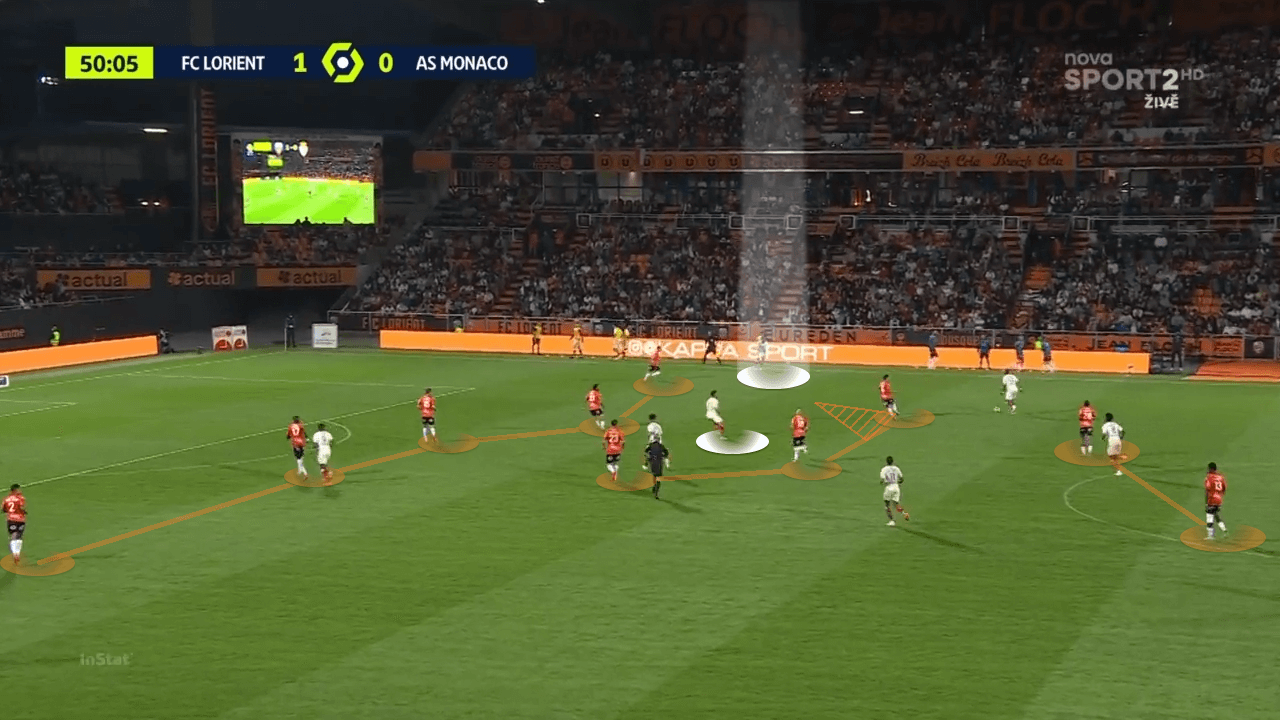 We mentioned the width issues of Monaco as Martins was too deep in the start. Around 25 mins, the Portugal winger stayed closer to the touchline, which was shown in the above image. Nevertheless, Kovač’s side was not using his pace well as quality passes to hit spaces behind were missing. 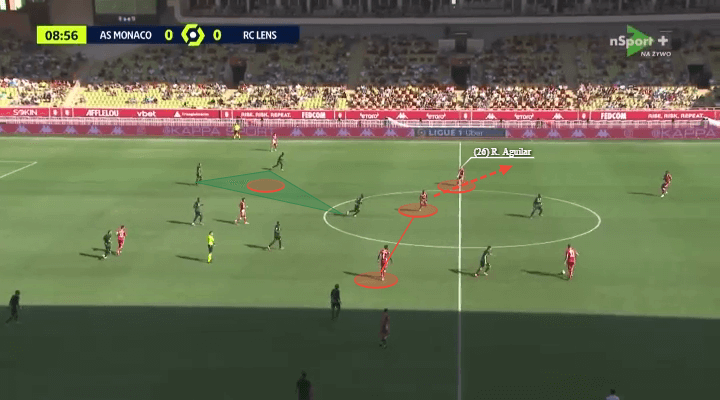 The development of the Lorient game was carried on to the next league game. When they faced Lens, Martins stayed much wider to hold the width, but the issue was the deep positioning of midfielders.

Against Lens, Kovač deployed a pair of deep full-backs that would go into the centre initially. The plan was to get more numbers in the construction of the attack, but it did not work too well. With deep midfielders, wide winger, and deep full-backs, Monaco were missing higher half-space occupation, as we highlighted in the vacated green zone. 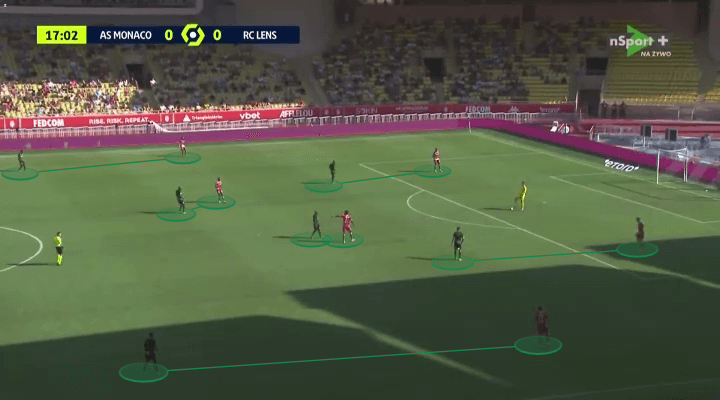 Another issue which Monaco could not solve against Lens was the height issue of the team. Usually, teams would expect the high front three to pin the defensive line, stretching the defensive side vertically. However, they did not have enough behaviours to attack spaces behind, Lens were happy to keep a back three to man-mark the front three.

As a result, the oppositions came up to press and go man-to-man as we draw in green. Monaco found it difficult to play short as all options in the centre were tightly marked, while the goalkeeper’s limited kicking ability could not send the ball to the front players. 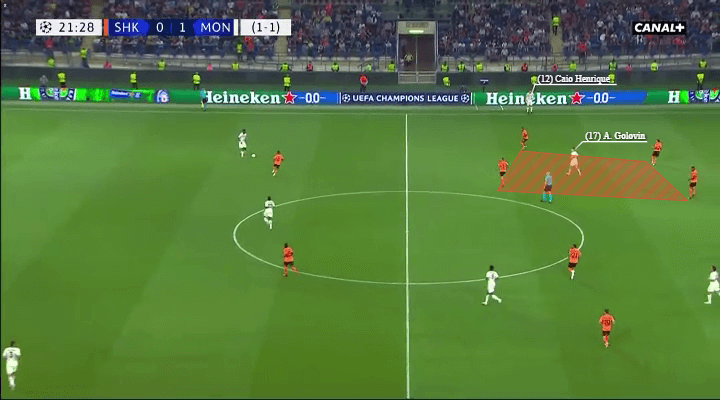 Finally, in the second leg of the UEFA Champions League Qualifying against Shakhtar, we saw a Monaco team that was close to last season’s standard. In Ukraine, they dominated the game, moved the ball in a quick tempo, smartly using half-spaces to generate superiorities.

For example, Golovin was a competent player to exploit half-spaces. The left-winger constantly occupied the orange zone within four players to achieve positional superiority, thus, narrowing the defence to free Caio Henrique in the wide channel.

Apart from the attacking side, Monaco also had some problems defensively and they conceded too many cheap goals. Sometimes it was not the defensive structure went wrong, but more about individual errors that costed the goals. 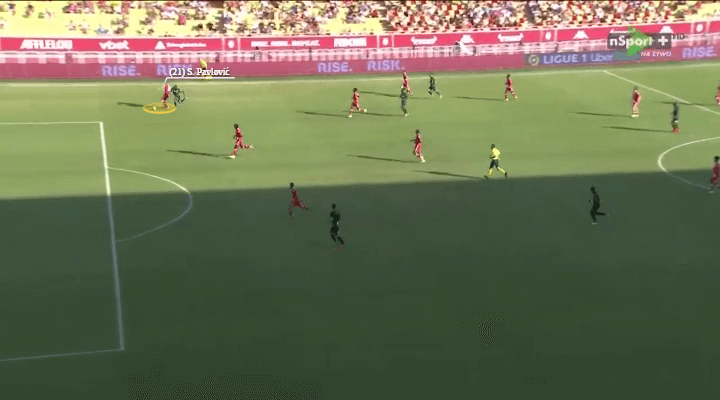 For example, against Lens, Monaco had control of the game and dominated possession. Things only went difficult when they conceded a cheap goal. The first one was avoidable, but Strahinja Pavlović failed to shield the ball, the poor body orientation let the opposition stole the ball from him. Then, it was poor goalkeeping that had gave away the goal.

As we’ve shown in this scout report, the start of Monaco was not good, the players and Kovač both knew it. They also suffered in some moments last season, but managed to turn things around when the season continued. Although they were knocked out by Shakhtar in the UEFA Champions League Qualifying, the performance they gave in Ukraine was quite positive. Monaco were the dominant side with more opportunities created, also forcing Roberto De Zerbi’s Shakhtar to play unusually. If they can give the same intensity, they could definitely produce positive results. 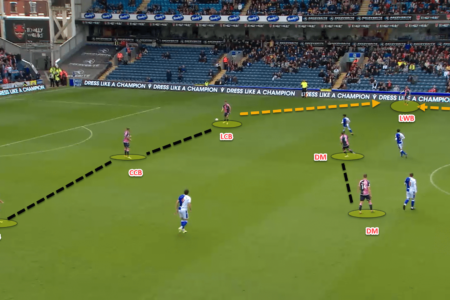 There have been some surprising narratives unfolding already in the EFL Championship so far this season. None more so than […] 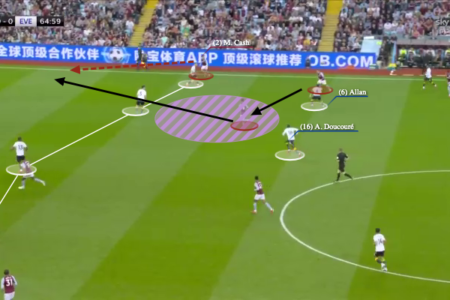 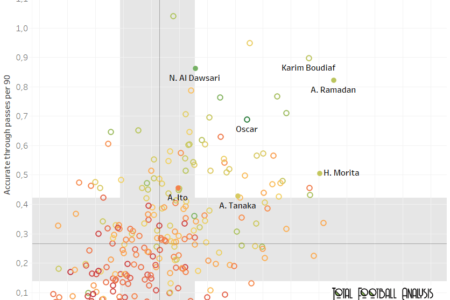