Why Lazio might have better chances than Juventus? – tactical analysis

The title race in Serie A this year has been tight, with Juventus finally meeting great competition in the face of Lazio and Inter. Whilst Inter got a little lost in their efforts, Lazio have been a constant threat to Juventus’ road to a ninth consecutive title in the league.

It’s Simone Inzaghi’s fourth season on charge and it’s just about time for his team to play on their potential, show ambition and flourish. Although their performance in the previous seasons didn’t meet the expectations, Inzaghi managed to build a team that employs his vision perfectly and is capable of reaching a top spot.

Improving the team’s strategy and the connection between the talented players resulted in a 19-game unbeaten run in the league, putting them in a great position to conquer the title. Meanwhile, after many successful years with Massimiliano Allegri, Juventus’ managerial switch didn’t go as planned, with the team having struggled under Maurizio Sarri, putting their leadership under question.

This tactical analysis, including scout report, aims to point out what are Lazio’s outstanding qualities that might give them an advantage in the title challenge. We will use analysis to show why the Biancocelesti seem to be better prepared than their rivals.

Lazio’s ex-player and current manager Inzaghi sticks to the 3-5-2/3-5-1-1 formation, which he had mastered during his time with the team. Despite the inconsistent results with that scheme in the past, he insisted on improving and using the players’ strengths in a way to make it work. He continued with this attack-minded approach, which resulted in the team scoring 60 goals in 26 games so far, breaking through every defence. What made a huge difference though is how they settled defensively. That’s a much-needed improvement that affected their results and combined with the outstanding attacking actions set them in the title race. The team have conceded only 23 goals which is the league-best defensive record thus far this term. Their smooth connection between the lines though is what might turn things in their favour.

We’re starting with what turned to be the biggest surprise in the 2019/20 season – their defensive performance. Whilst previously Inzaghi wouldn’t stick to a consistent defensive strategy when it comes to starting XI and player roles, this term he stuck to a more settled game plan which includes many more players than his defenders. His three-man backline now consists of players that complement each other’s’ performance with roles assigned аaccording to each players’ strengths.

The most regular starters are Francesco Acerbi, Ștefan Radu and Luiz Felipe. Combining Radu’s and Acerbi’s experience and tactical intelligence with Felipe’s pace and strength tuned out as a perfect match. Depending on their opponents, the defensive line is positioned differently, although they most frequently stay up high. Of course, when out of possession they get additional support by the wing-backs Manuel Lazzari and Senad Lulić who would immediately drop back during defensive transitions and form a line of five.

The more advanced players also provide some defensive stability applying high press and having Lucas Leiva and Sergej Milinković-Savić to help in the central areas.

Looking into Juventus’ defensive record it doesn’t differ than their opponents’ that much, despite their initial struggles to reach balance at the back, especially with Juan Cuadrado as a full-back. Their main issues come from the lack of concentration and their tendency of committing individual errors, although that’s often a result of their uncertainty in midfield rather than their defensive actions.

Lazio’s smooth build-up and confidence on the ball are impressive. The team plays out from the back using short pass combinations in the spaces between the lines. The connection between the players is impressive.

Acerbi, being a great ball-playing defender, would occasionally move out of his position in order to help with bypassing the press. Once the team is pressed high he moves higher up the pitch behind the first pressing line, providing an additional option for a pass, hence build-up from the back.

The main figure in their efforts to advance the ball though is Luis Alberto, who is considered the best performer for Lazio in the current season. His key movement and passing abilities help the team to deliver the ball to the final third as quickly as possible. His position in the left central midfield area allows him to move around (all the way back to his defensive teammates) and pick up the ball distributing it further in the best possible way using his 86.4% average passing accuracy.

His partner in the centre – Milinković-Savić, adds additional threat in the final third. He is the best aerial performer in the team which combined with his positioning can often allow them to use long balls in their build-up, being secure that he can receive them and quickly turn them into goal-scoring opportunities.

What makes the difference for them though is their counter-attacking actions. They form 5,81 counters on average per game which adds even more explosiveness to their attacking actions and leaves their opponents helpless. That’s often thanks to Lukas Leiva’s actions and awareness. He does 6.23 interceptions on average and is one of the main responsible to win the ball back and quickly transfer it further where the attacking players are well-positioned and prepared to finish the attack.

As mentioned Lazio’s outstanding attacking performance is another reason for their good results. Committing many players to the forward actions and relying on constant movement and player rotations are giving their opponents a hard time in filling all the gaps. Despite their advanced positions Ciro Immobile and Joaquín Correa would often drop deeper to pick up the ball or to open spaces for Alberto and Milinković-Savić to operate in. Both attackers tend to move in the wider areas too, but they most frequently cover the half-spaces. Their movement is so unpredictable that it makes it almost impossible for defences to cover them properly. Their off the ball movement, combined with their teammates’ sense for good through balls, results in the second-best attacking record in Serie A this season.

The wing-backs would actively contribute with crosses to the overloaded box area, where the team commits as many players ass possible providing shooting options as well as putting the defences under immense pressure. The applied pressure turns things in their favour as the opposition fail to deal with it and often commit individual errors, resulting in giving away penalties. Actually, Lazio have scored 11 penalties. Immobile is responsible for 10 of them making him the joint top goal scorer in the league with 27 goals thus far.

Consistency is the key to success

What gives Lazio a better chance to win the title is their consistency. The team wins games effortlessly, whilst Juventus had some struggles throughout the season. They often fail to convert their huge amount of chances into goals and rely on controlling the game in the midfield and slowing down the tempo until they find the right moment to penetrate. That would often get them stuck in midfield lacking creativity in the final stages of their attacks. The Biancocelesti’s strategy is completely different. They employ high pace and rely on quick movement of the ball and quick short pass combinations, combined with strong off the ball movement. That is why despite their lower record of created shots and positional attack, they look and are the more threatening team.

If Lazio stick to their tactics keep that explosiveness and unpredictability in their attacking actions, whilst staying tight at the back, they might have better chances of winning the Serie A title than Juventus, who are struggling with their identity under Sarri.

Football performance analyst. Tactics maniac. Football lover in every fibre of my being.

Portland Thorns enter the 2020 NWSL campaign on of what can be considered a streak of fairly successful seasons. In […] 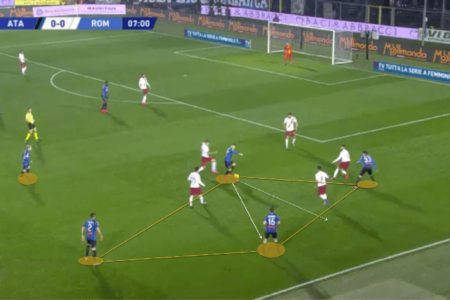 Using positional rotation is by no means a new concept, with Argentine coach Ricardo La Volpe’s “Salida Lavolpiana” being used […] 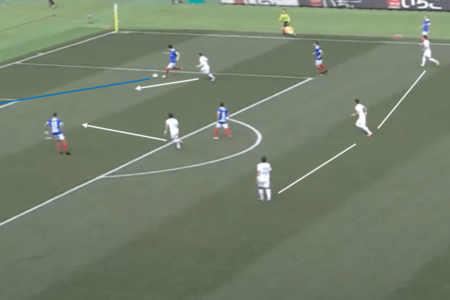 In their opening fixture of the 2020 J1 League campaign, last season’s champions Yokohama F. Marinos fell to a surprising […]