The England U19s continued their impressive recent record at the UEFA European Youth Championship by lifting the trophy for the second time in their last four attempts. The annual tournament, cancelled in 2020 and 2021 due to the coronavirus pandemic, has seen England win it twice and reach the semi-finals once since 2016.

Before this recent resurgence at the international youth level, England had only won the tournament once since 1980. The young three lions now share the joint-most trophies at the tournament, 11, with Spain.

Coached by ex-Liverpool youth team player Ian Foster, England dominated the competition from the first qualifying round to the final in Slovakia. The 45-year-old’s side won 10 (including the final which was decided in extra time) of their 11 matches and drew one. They amassed 27 goals and conceded just three.

This analysis will be presented in the form of a scout report. The focus will be on how England set pressing traps and how they create goalscoring opportunities through their positional attacks. In this tactical analysis, we analyse the key tactics behind England’s title-winning campaign at the UEFA European Youth Championship. 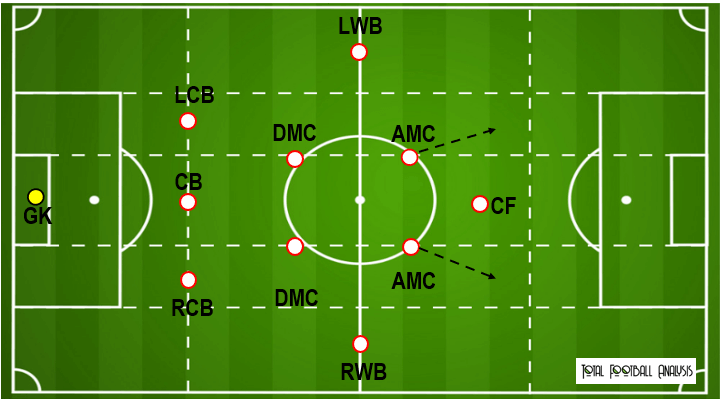 As the above tactical diagram shows, England deployed a 3-4-3 formation. Although there were different tactical tweaks for each match, Foster set his side up in this formation in all five of their matches in the competition.

At the finals, England scored 12 goals from an expected xG of 11.9 meaning, in statistical terms, they were deserving of their impressive goals haul. Their xG per match was 2.38 with their direct opponents averaging 0.92 xG per match.

Carney Chukwuemeka, who came through the youth system at EFL club Northampton Town, was England’s top scorer at the tournament with three goals. The Austrian-born midfielder has made 11 Premier League appearances for Aston Villa over the previous two seasons.

England only conceded two goals in Slovakia and did not concede a goal until the semi-final stage when Italy scored. Their total xG Against for the whole tournament was 4.6. The two goals conceded was the least in the competition despite playing the most games.

Foster sets his side up in a very expansive and attacking manner. Regularly, four, and sometimes as many as six, players matched up against the opposition’s backline. All of England’s tournament opponents played with a back four, often giving England numerical superiority in the final third.

The following section will break down specific plays in their matches with Israel and Serbia, but this was a trait present in all five of England’s matches at the finals. 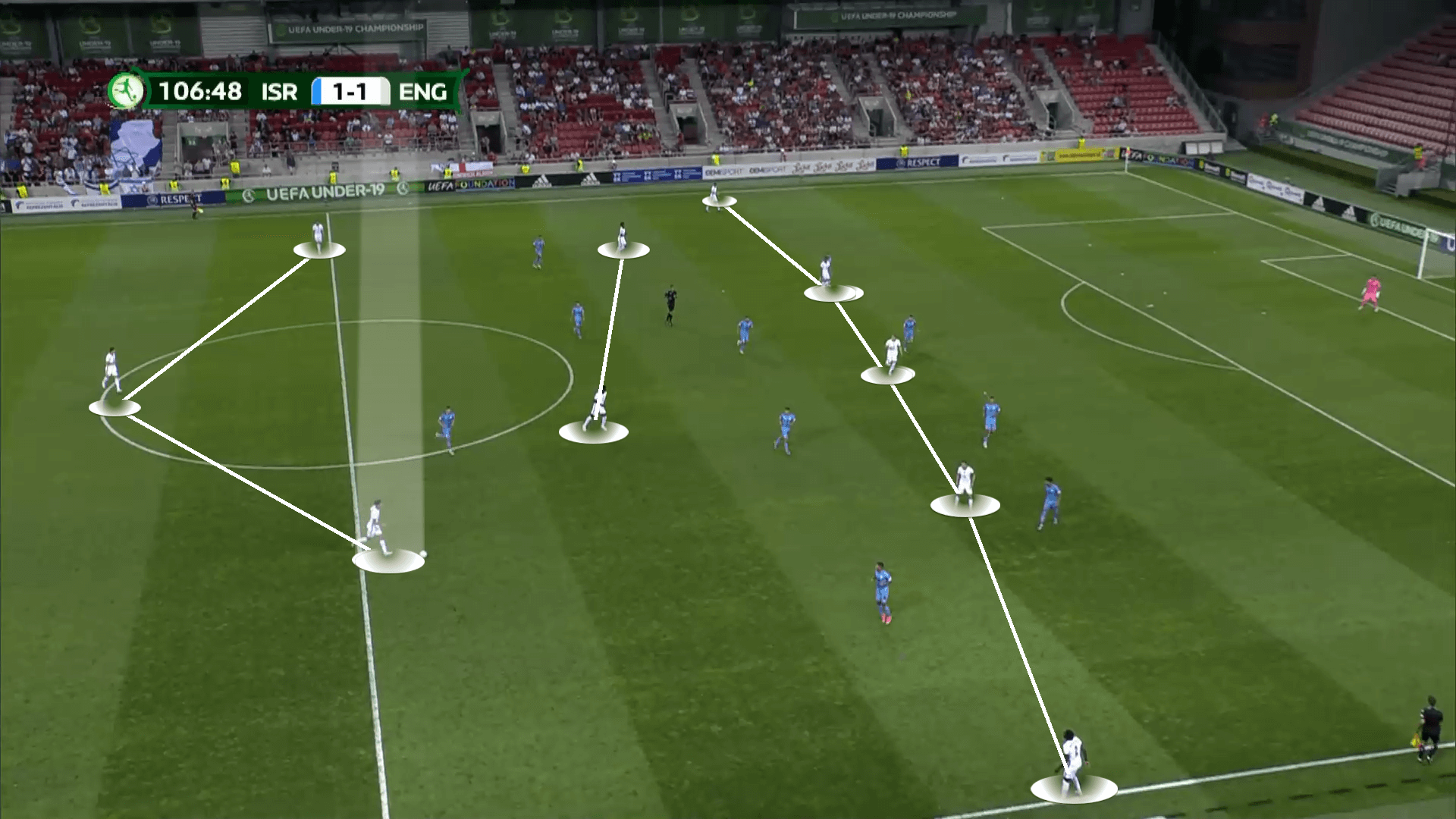 The above image shows England’s formation during a sustained, patient positional attack in the final against Israel. The right centre-back (highlighted) has possession of the ball at the halfway line. Both wing-backs are high and the attacking midfielders are playing as inverted wingers beside their forward, up against Israel’s back four. One defensive midfielder is showing for the ball in the central area with the ball-far defensive midfielder playing relatively wide on the left. 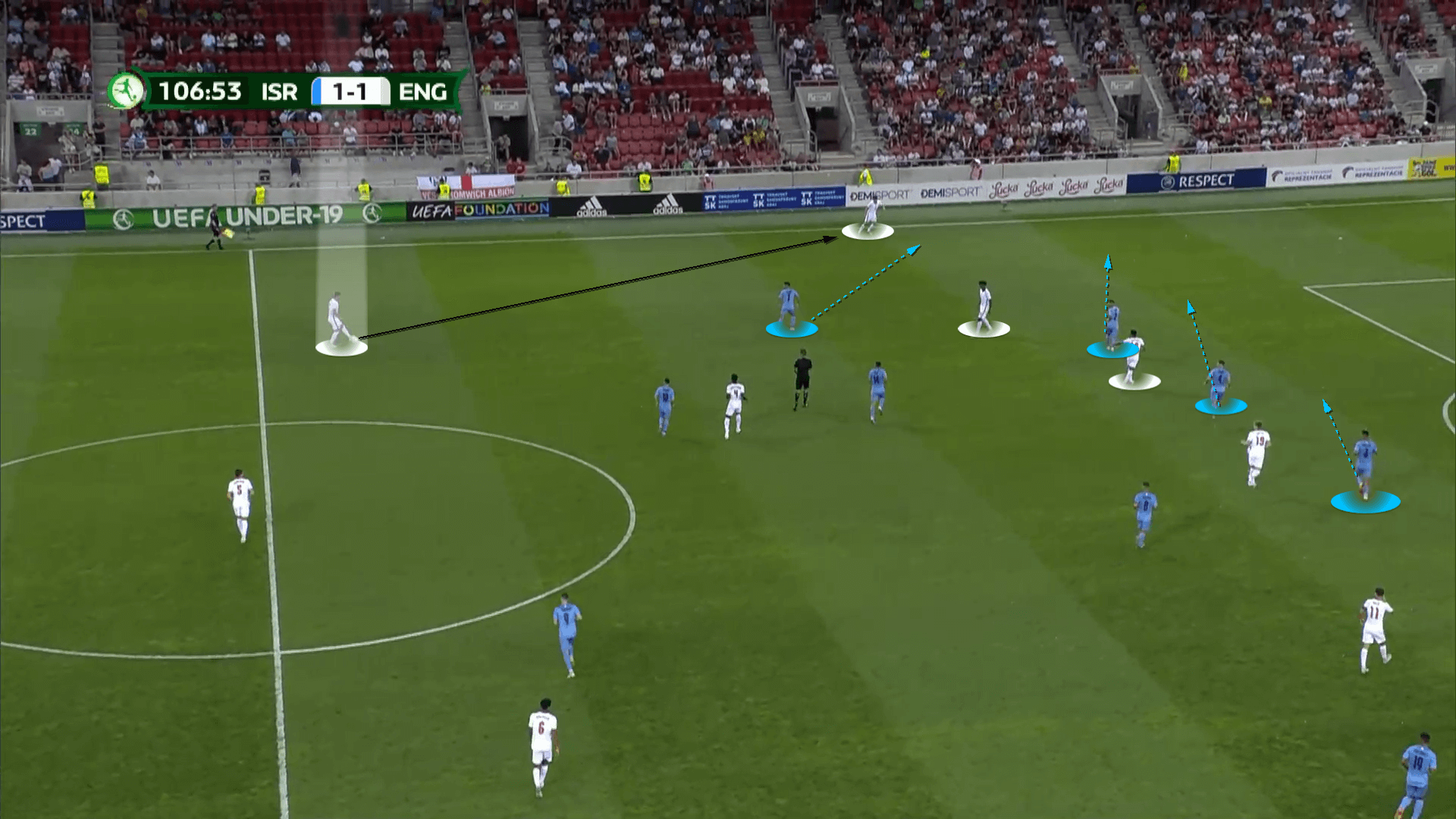 As can be seen in this image, Israel’s defensive set-up in the final was designed to keep them compact in central areas and force England to play into the wings. Here, the ball has been switched from the right centre-back to the left centre-back.

The attacking midfielder, now playing in the inverted left-forward position, tries to pin the Israel right-back. With the DMC playing high and wide, England now have two players open on the outside of the right-back.

Although initially outnumbered, Israel predicted the wide pass and shifted across quickly enough to overload the wide area when the left wing-back received the ball. To avoid getting trapped down one side of the pitch, the wing-back’s first touch was backwards. This allowed England to again switch the play. 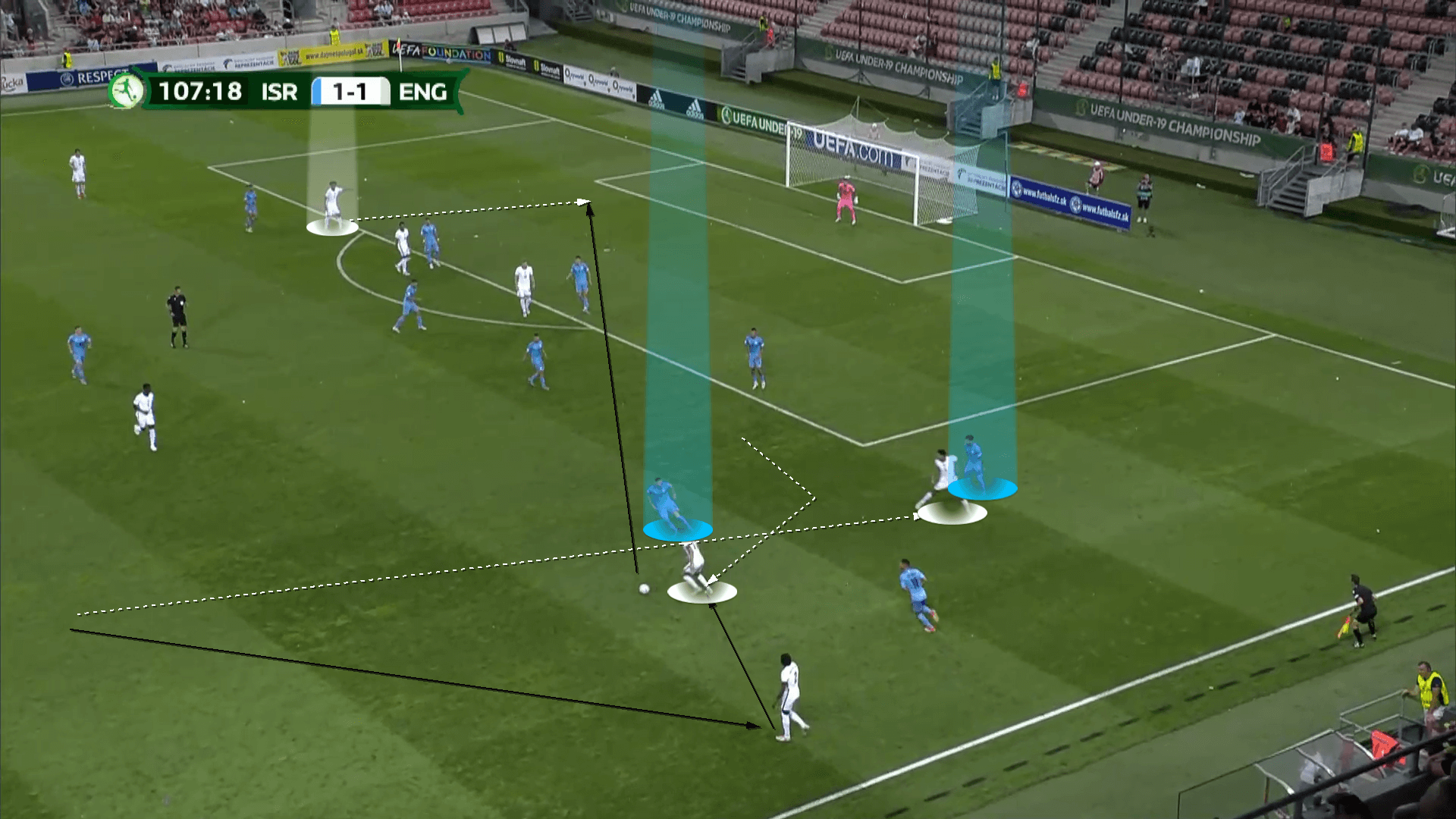 Now after the ball has been switched back to England’s right side, the right-sided DMC played the ball into his right wing-back. The DMC passed the ball and immediately made a run beyond the backline. This movement dragged the closest Israel midfielder (highlighted) away from the AMC, “11” Harvey Vale, and blocked the left-back (highlighted) from tracking him. The wing-back then passed to Vale who received it in space. The DMCs movement created enough space to allow Vale to cross the ball before a midfielder could get back to prevent it.

On the opposite side, the Israel right-back, possibly because he is unsure if he is responsible for picking up the wing-back on his outside or the “defensive” midfielder, Chukwuemeka, on his inside, is slow to shift across. This allows Chukwuemeka to run into the box unimpeded. The ball is crossed over the first centre-backs head towards the far post. Chukwuemeka latches on to the cross to put England into a 2-1 lead. 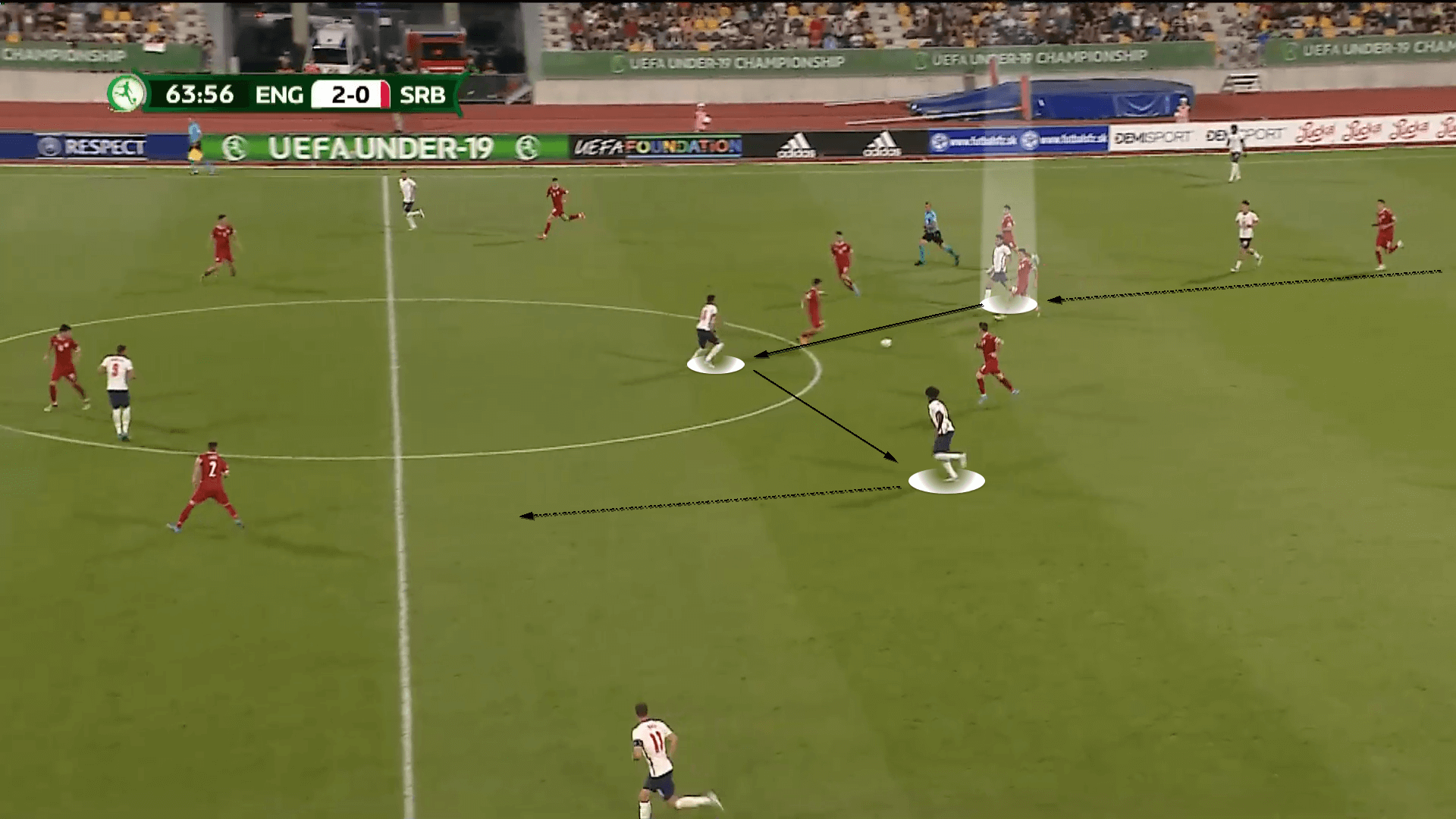 The above image shows the moments after England have played out short from the back. A series of clever triangles and calm passing had drawn Serbia into pressing them high.

After passing around the high-pressing Serbians, England broke the first line of pressure by centre-back, ‘6’ Jarell Quansah, driving out with the ball. A gap, just big enough to allow Quansah to dribble through.

The opposition’s predictable reaction was to compress into the central area to halt the centre-backs run. This allowed Chukwuemeka to receive the ball in half-space. Because he received in this position, it is the right-back, ‘2’, that presses him. 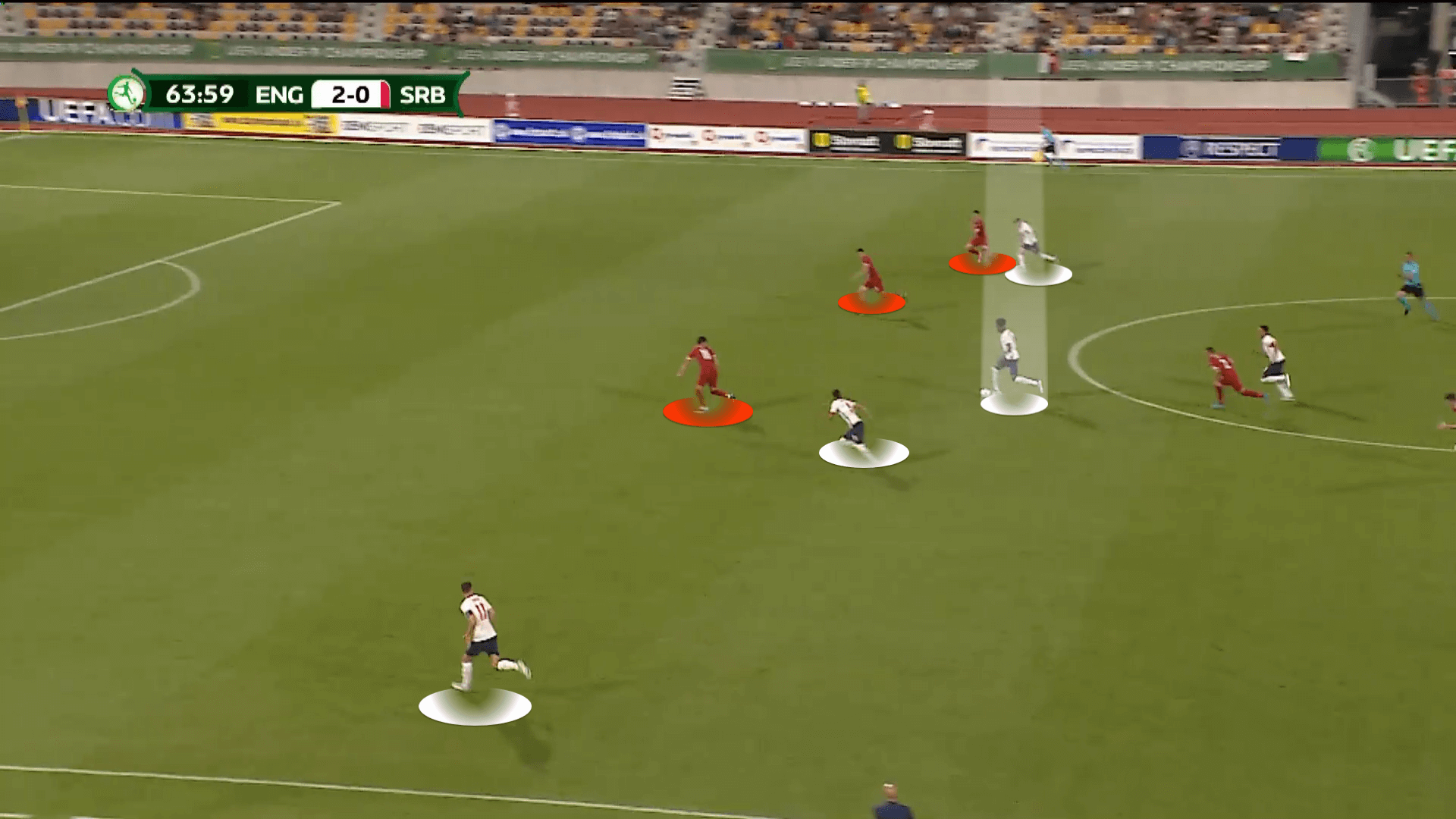 Chukwuemeka’s body shape allows him to take a forward touch. He takes one touch and skips past the outrushing right-back. The Aston Villa player then drove at pace towards the centre-backs with three players making runs ahead of him creating a four-on-three.

An impressive aspect of England’s youngsters is the way they accelerate their speed of play when defensive lines are broken. Both in terms of the player on the ball and his supporting runs. Within seconds of the centre-back breaking the first line of pressure, England were running at, and outnumbering Serbia’s backline. 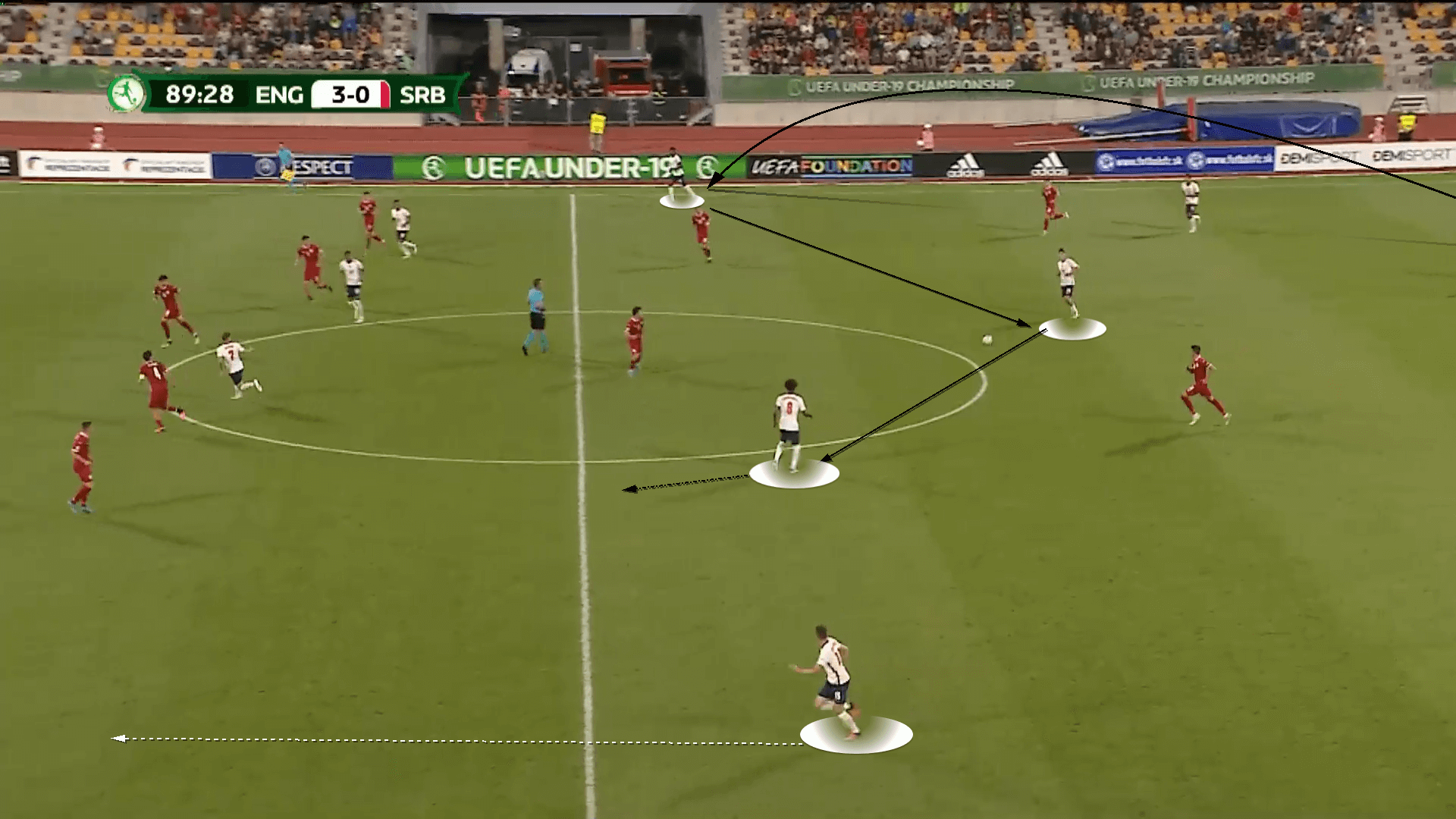 In this example from the same match, England played over, instead of through, Serbia’s high press. The ball was initially clipped over the first line of pressure by the goalkeeper into his right wing-back.

The ball was then laid back to the ball-near DMC. The ball-far DMC, Chukwuemeka, backtracked to, once again, receive the ball in the opposite half-space. His first touch was forward, before finding his left wing-back. The wing-back, being pressed by the Serbian right-back, then played his forward through on goal.

Again, it was the speed of play that put the left wing-back in a position to receive the ball and play through the stretched backline. It was also the bravery to position so many players in advanced positions that made this phase of play so dangerous.

The quality of the passing and movement combined with the change in their speed of play get England into these types of goalscoring situations. However, it is also the willingness of the players, and the freedom they have, to drive with the ball at their feet that makes a lot of these plays possible. 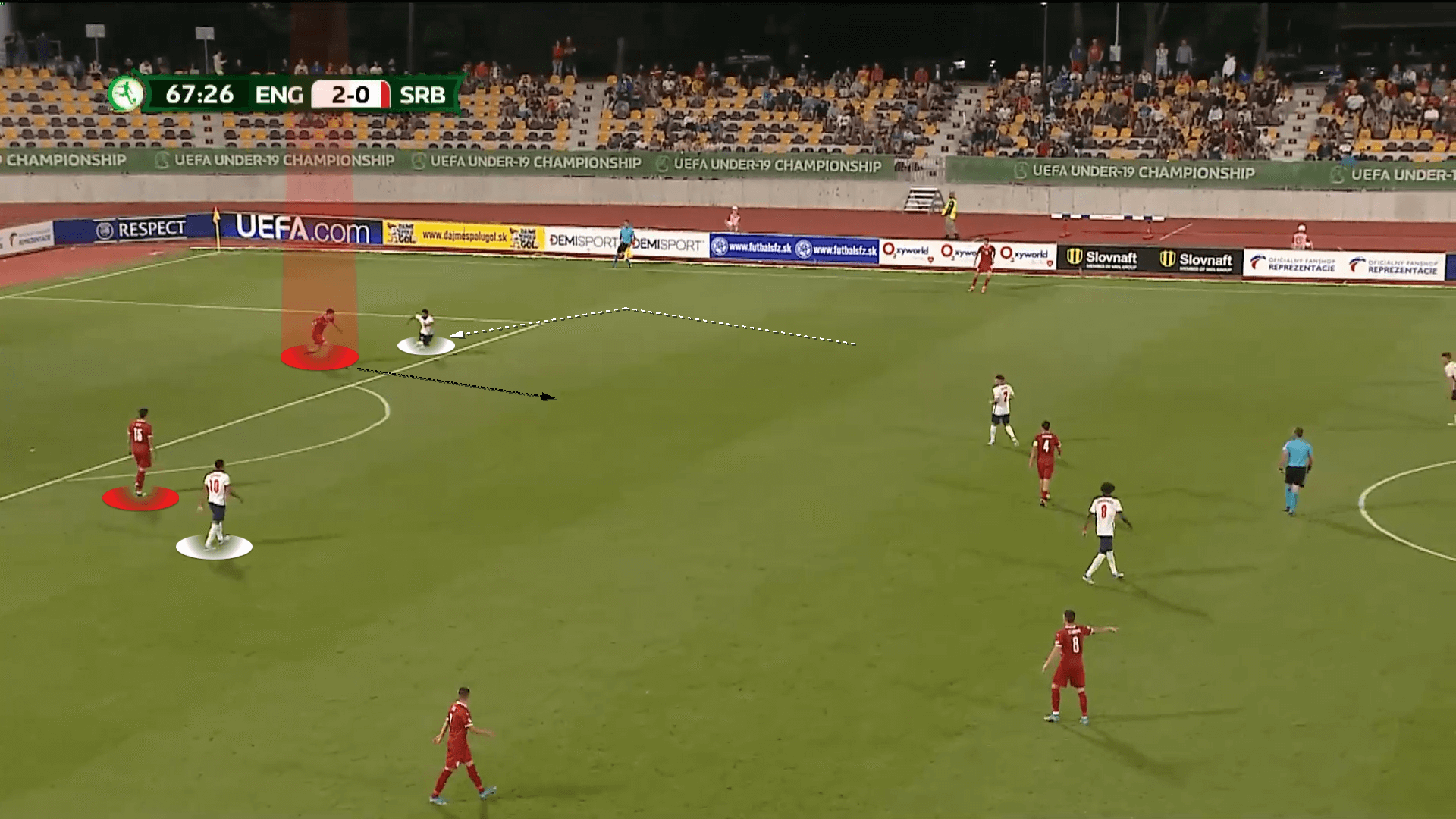 Another distinguishing element of England’s play is the manner in which they press. They press high, with intensity, and set traps for the opposition to fall into.

The image above shows the moments after the opposition’s centre-back has received a pass from his goalkeeper. The England forward loops his pressing run to cut off a passing lane to his left-back. The speed at which the forward presses prevents the centre-back from being able to turn and play back to his goalkeeper. His opposite centre-back is also occupied, leaving him no option other than to dribble into the space ahead of him. 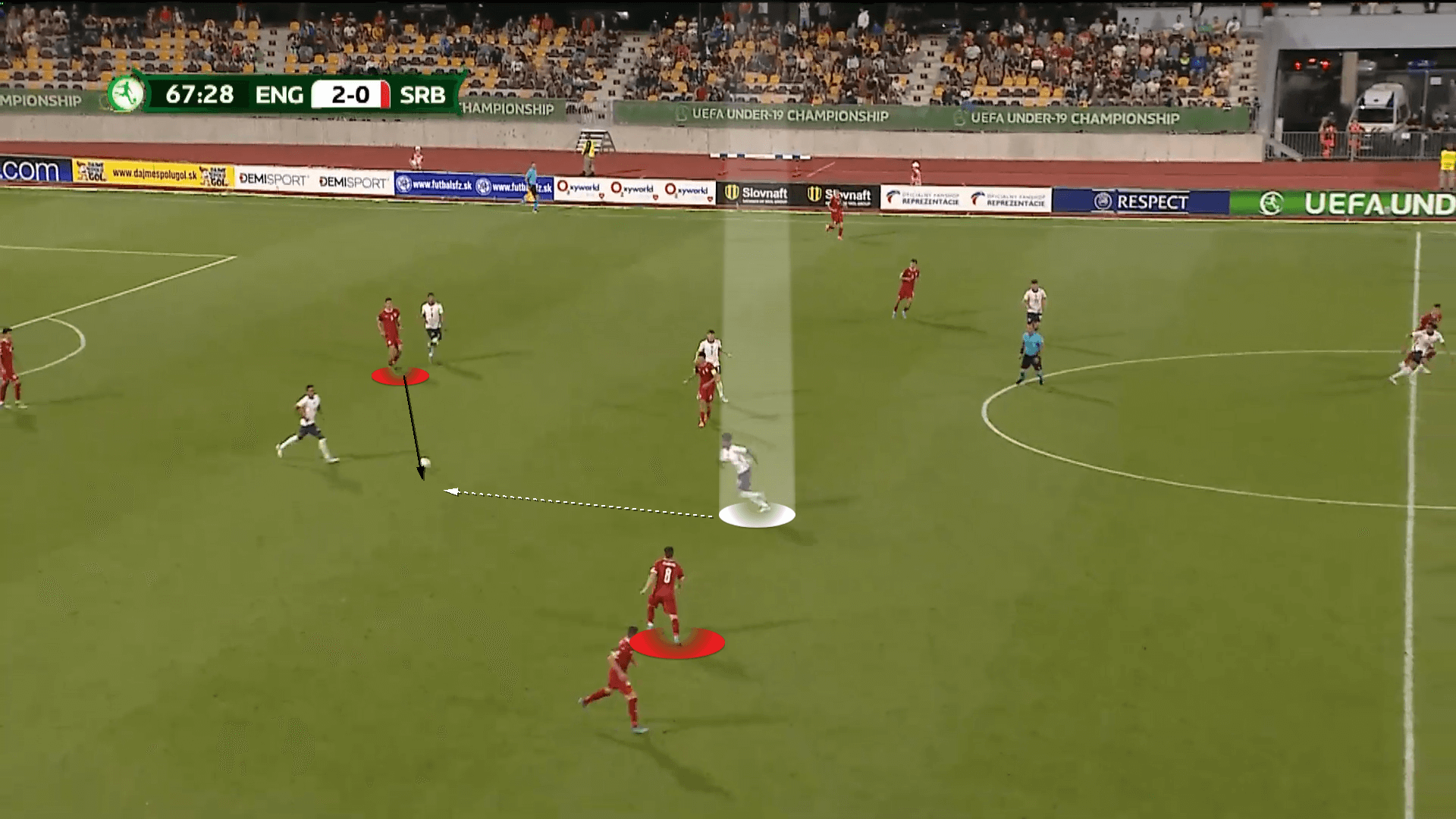 As the centre-back steps out with the ball, England mark all the players near the ball. The only players available, and in sight of the centre-back, are across the pitch. This results in the centre-back playing a predictable cross-field ball which is intercepted by Chukwuemeka.

Chukwuemeka, who received the ball when Serbia were at their most exposed, drove with the ball at the right-centre back. He then cut onto his right foot and coolly finished to put England 3-0 up.

These traps, usually set to lure the opposition into the centre of the pitch, were used and were effective, throughout the tournament. By pressing with intensity, and in a way that made the opposition’s play predictable, England created several clear-cut chances from these scenarios.

The young lions, who went one step further than their senior colleagues did in their equivalent tournament last summer, are thoroughly deserving of their title. From the first qualifying game to the final, England dominated the competition.

Foster’s attacking style of play is at the same time tactically disciplined. yet free-flowing. His side’s tactical flexibility, both between games and in matches, allows them to play what the situation requires. The quality and the tempo at which they press and move the ball make them pleasing to watch whilst being deadly effective. The future looks bright for England’s next generation. 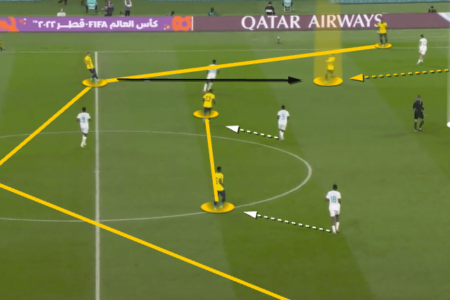