Before we show you Ty’s solution, let’s remind ourselves of the challenge he was posed.

It is January 2021, and your club is set to play against Jurgen Klopp’s Liverpool. The Reds are still the talented counter-pressing side that they are today, and your side needs a win.

It’s January 2021 and Liverpool are just as good as they were in their dominant 2019/20 league campaign. Facing against world-class players such as Virgil van Dijk, Sadio Mané and Mohammed Salah is no easy task, not to mention having to go head-to-head in a tactical battle against Jürgen Klopp. To increase the already extreme challenge of facing The Reds, almost the entirety of my first team is injured, luckily, I have been able to bring in seven young talents in the January transfer window to play alongside the four remaining uninjured first-team players.

Liverpool are expected to play as they’ve done for the last few seasons, with Gomez preferred over Matip in recent times.

The four first-team players that managed to escape the sudden injury crisis are: Cancelo, Ndidi, Partey, and De Bruyne. 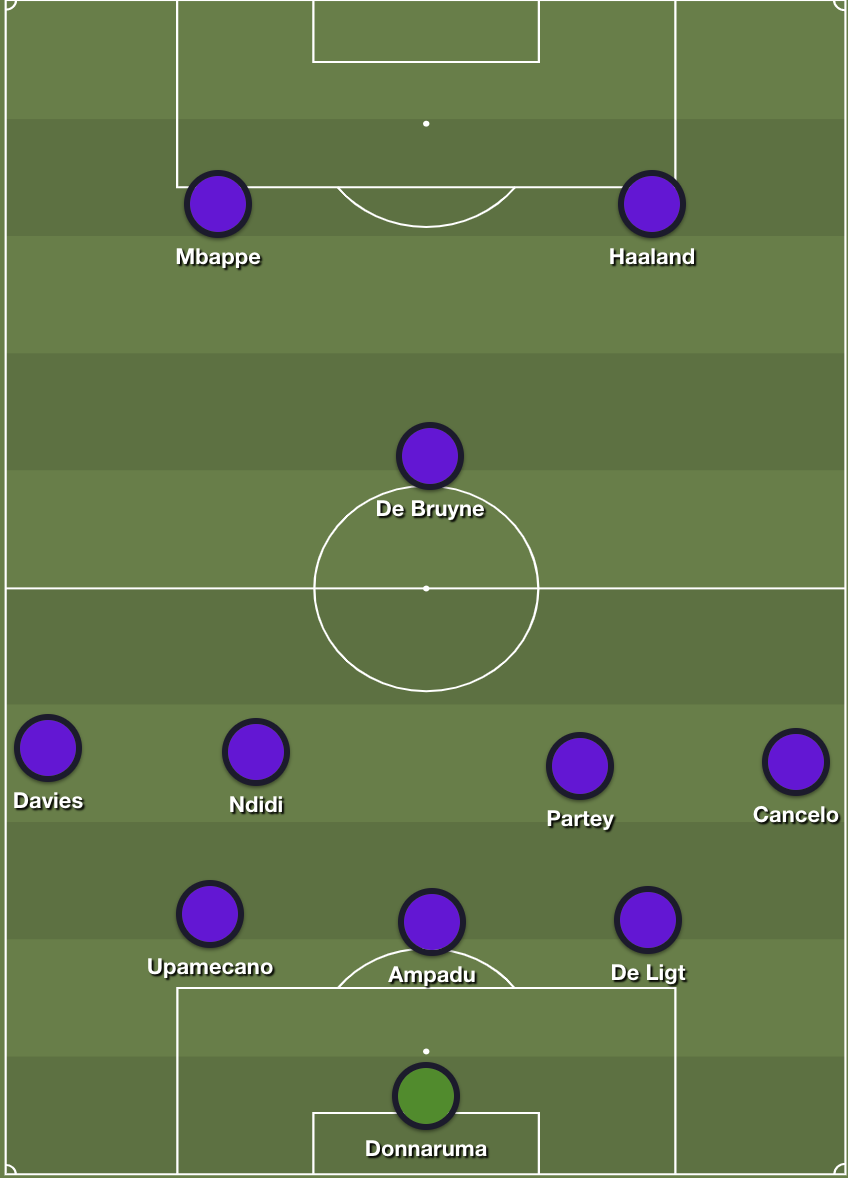 Liverpool will dominate possession, our main aim in the match is to hit them in transition while remaining defensively solid.

When Liverpool’s centre backs are on the ball, we’ll look to cut out their passing lanes to key players. Kevin de Bruyne will aggressively man-mark Fabinho even when the Brazilian drops very deep to create passing angles. Kylian Mbappé and Erling Haaland will position themselves in between the centre-backs and the full-backs to cut out the passing lane to Andy Robertson and Trent Alexander-Arnold. In the below diagram we can see Mbappé and Haaland cutting out the passing lanes to Alexander-Arnold and Robertson. 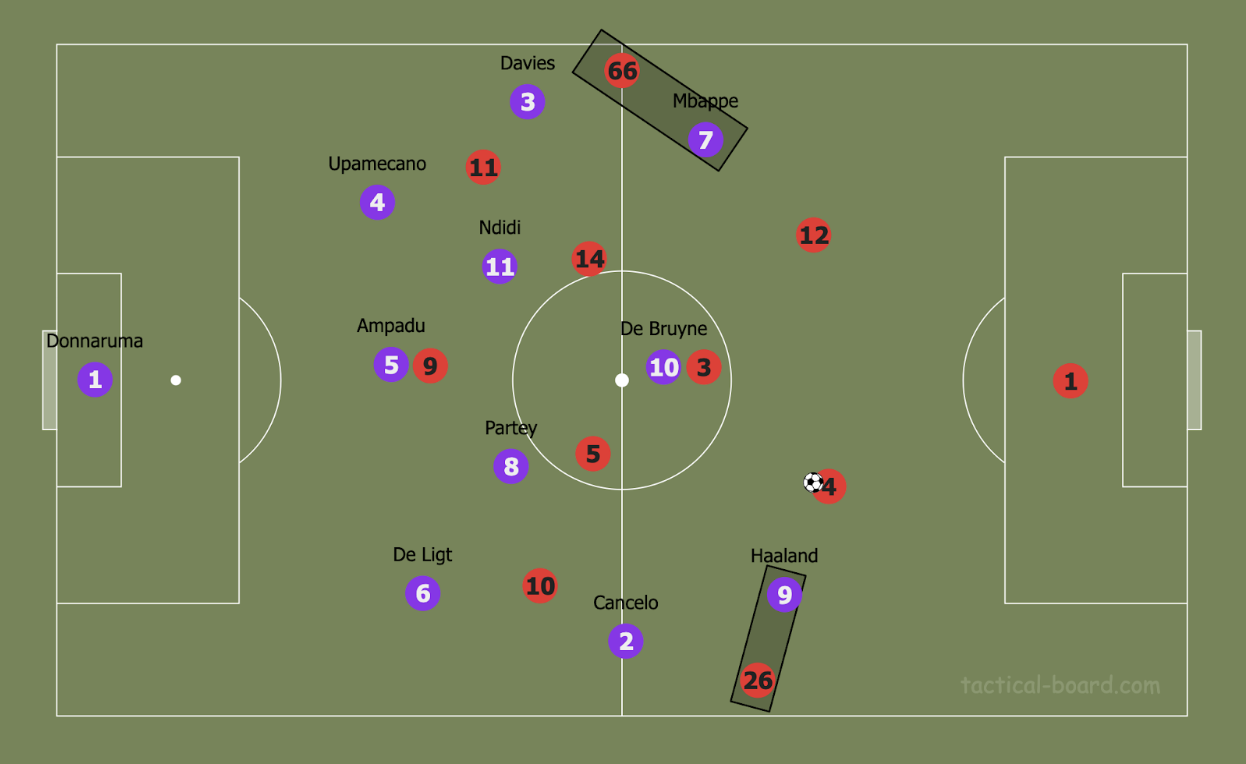 The hybrid formation will oscillate between a 4-4-2 diamond and a 3-5-2 with Ampadu following Firmino as the Brazilian drops into midfield, as shown in the below example. 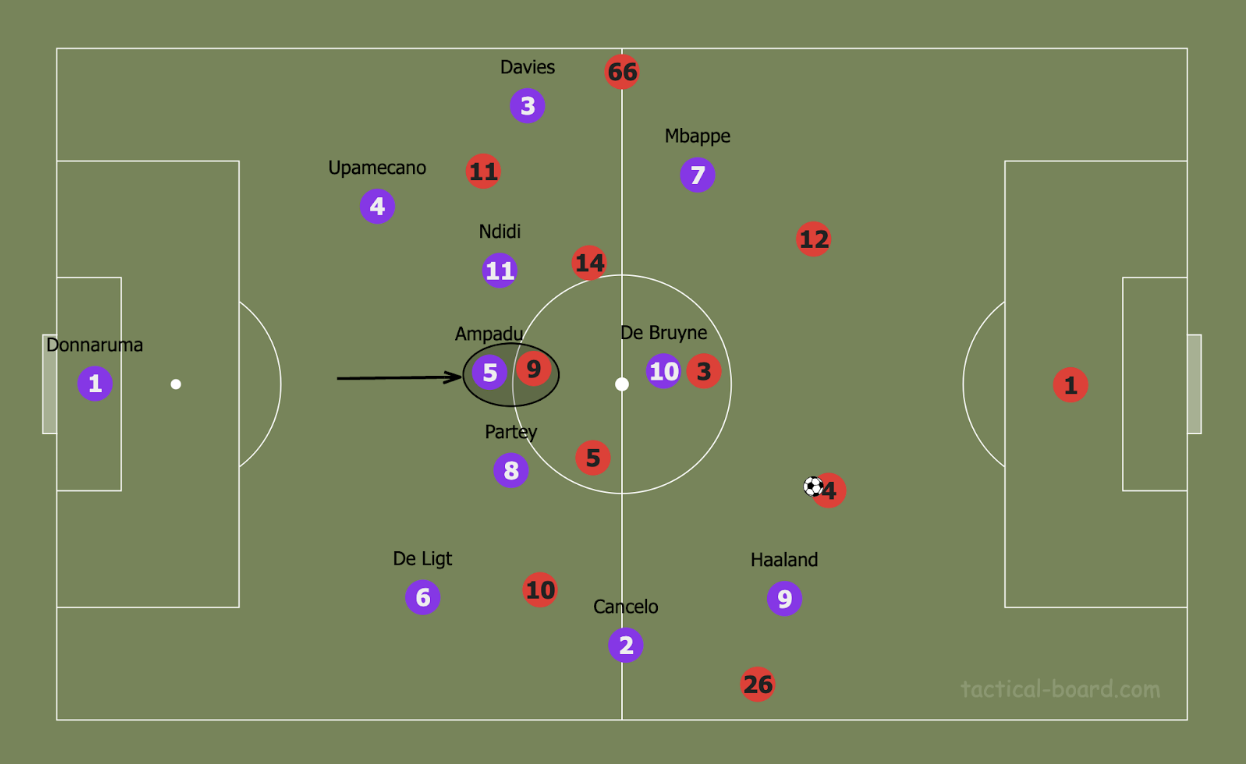 The two central midfielders, Wilfred Ndidi and Thomas Partey, both have the athleticism and tackling ability to defend the midfield in a zonal fashion, looking to ensure that Liverpool’s midfielders don’t get time and space on the ball. The diagram pictured below shows Ndidi and Partey defending the midfield zonally. 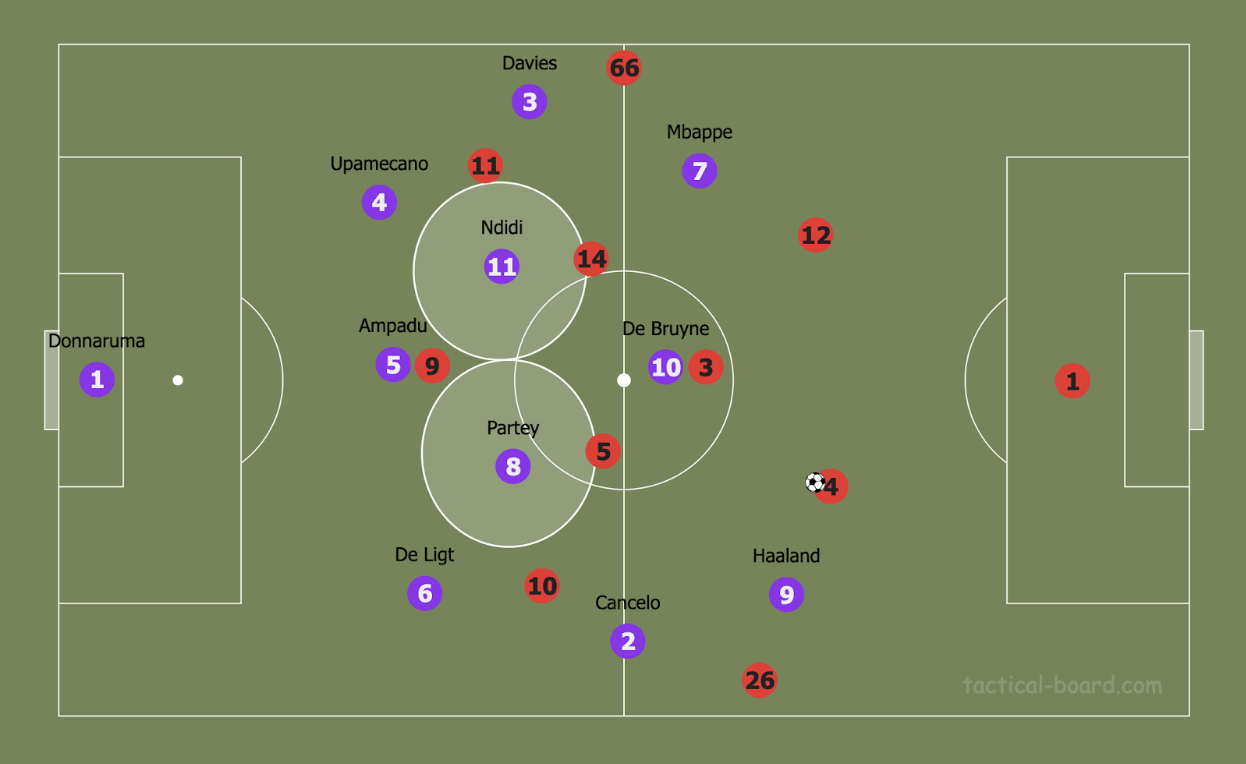 Our full-backs (Joao Cancelo and Alphonso Davies) will position themselves slightly more centrally, this is to ensure they have access to Mohammed Salah and Sadio Mane, while the nearside centre back and midfielder will create a triangle around Liverpool’s winger in a pressing trap as we intentionally leave the passing angle between Liverpool’s centre-back and winger open. When they receive the trio will look to collapse upon the ball. The image below shows our pressing traps, with Davies, Dayot Upamecano, and Ndidi ready to collapse on Salah, while Partey, Matthijs De Ligt, and Cancelo are ready to collapse on Mané. 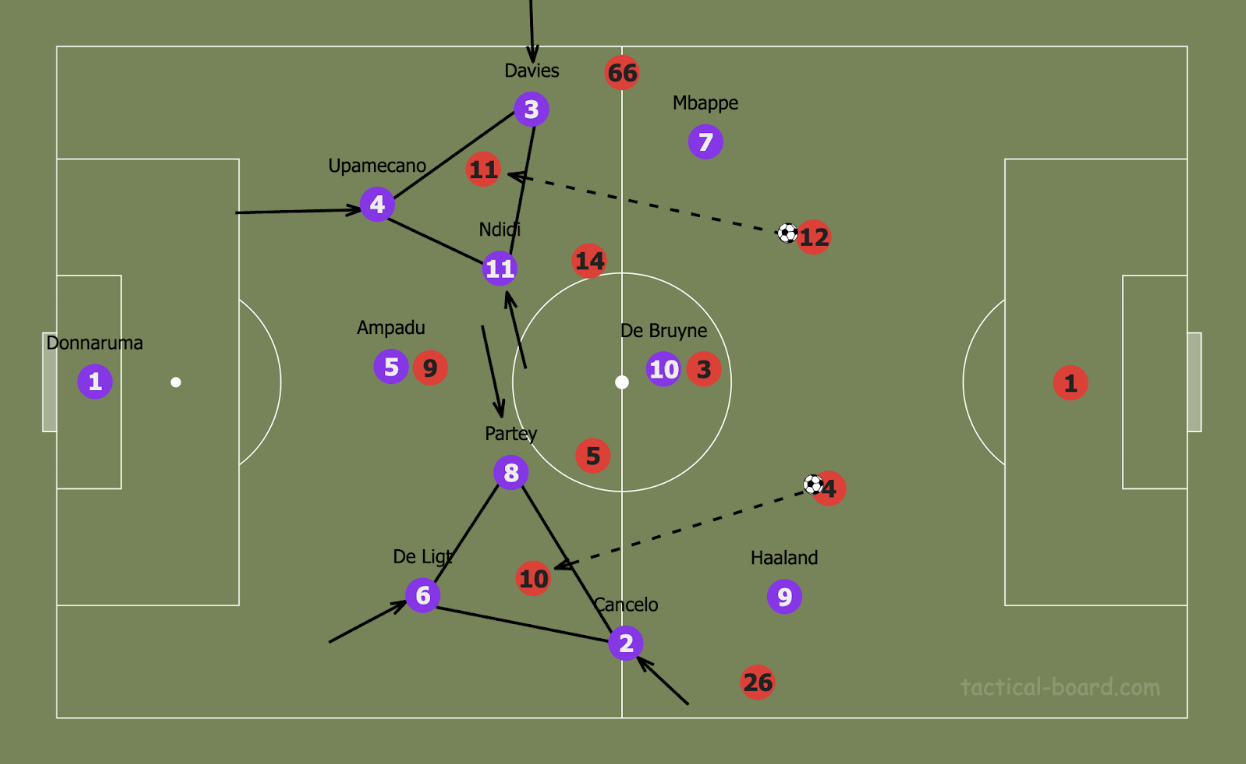 As Gini Wijnaldum and Jordan Henderson are unmarked, they will (particularly Henderson) drop to aid the build-up. When this happens we won’t follow them, rather we will no longer man-mark Roberto Firmino with Ethan Ampadu, handing over this responsibility to Ndidi or Partey as he enters their zone. Ampadu will stay in the defensive line to defend against long passes that Henderson and van Dijk will play. If Henderson doesn’t drop to aid build-up and van Dijk looks to play a long pass, Ampadu will still remain in the back line, as a midfield overload in Liverpool’s favour as they play a long pass will only advantage them when the second ball drops, but Ndidi and Partey will look to ensure that Wijnaldum and Henderson do not capitalize. The below example shows how Ampadu will not follow Firmino if there is potential for a long ball. 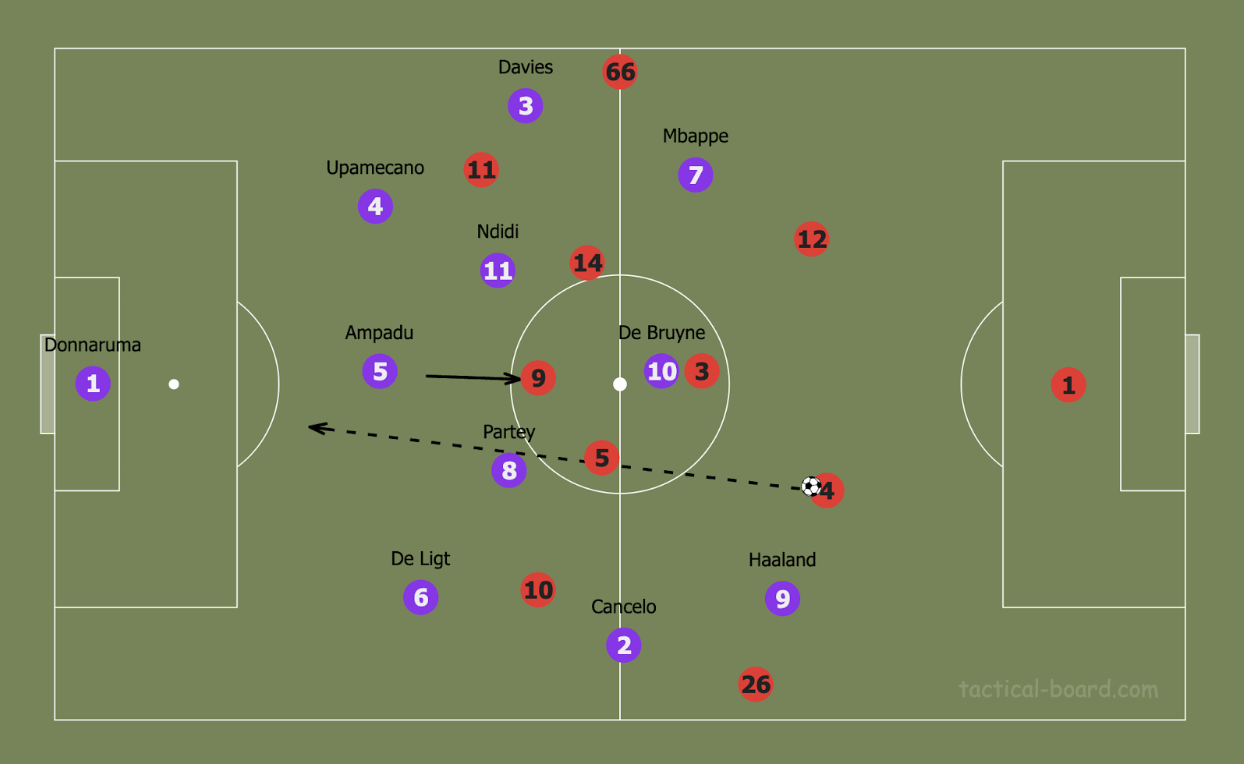 In the below diagram, we can see all of these defensive mechanisms in action at once. Haaland and Mbappé cut out the passing angles to Alexander-Arnold and Robertson, De Bruyne and Ampadu man-mark Liverpool’s pair of Brazilians in Fabinho and Firmno, while Partey and Ndidi zonally defend the midfield while contributing to pressing traps against Salah and Mané. 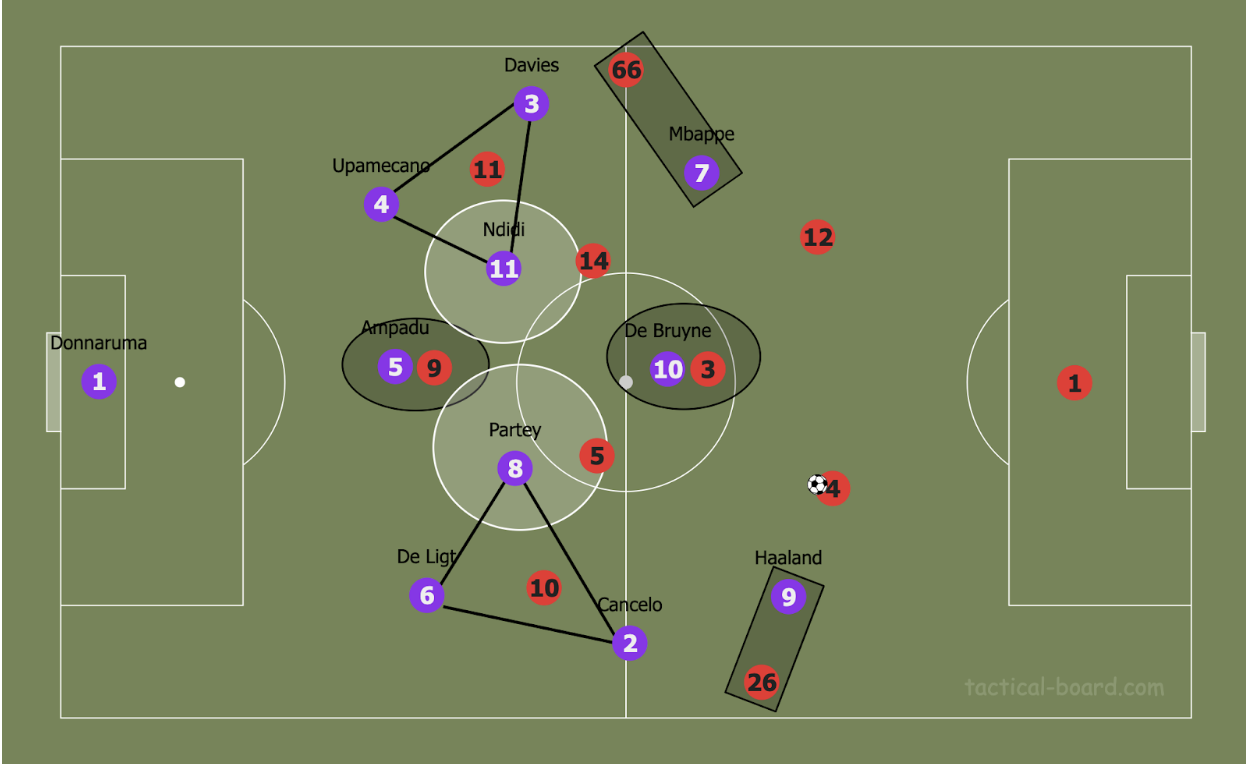 Liverpool have too much quality for us to keep them out of dangerous areas for 90 minutes. Liverpool attack in a 2-3-5 shape, with the wingers in the halfspaces, the centre forward in the centre, and the fullbacks in the wings. To combat this, we’ll employ the inverse of this shape: a 5-3-2. The three centre-backs will man-mark Liverpool’s famed front three of Salah, Mané and Firmino, while the fullbacks will take up a more advanced position in relation to Alexander-Arnold and Robertson. This serves two purposes, looking to pin Liverpool’s full-backs back, while also serving another purpose in offensive transition, which I will detail later.  The below image shows Liverpool’s occupation of the 5 vertical corridors, with our man-marking scheme across the back three, as well as the full-backs positioning being more advanced than usual. 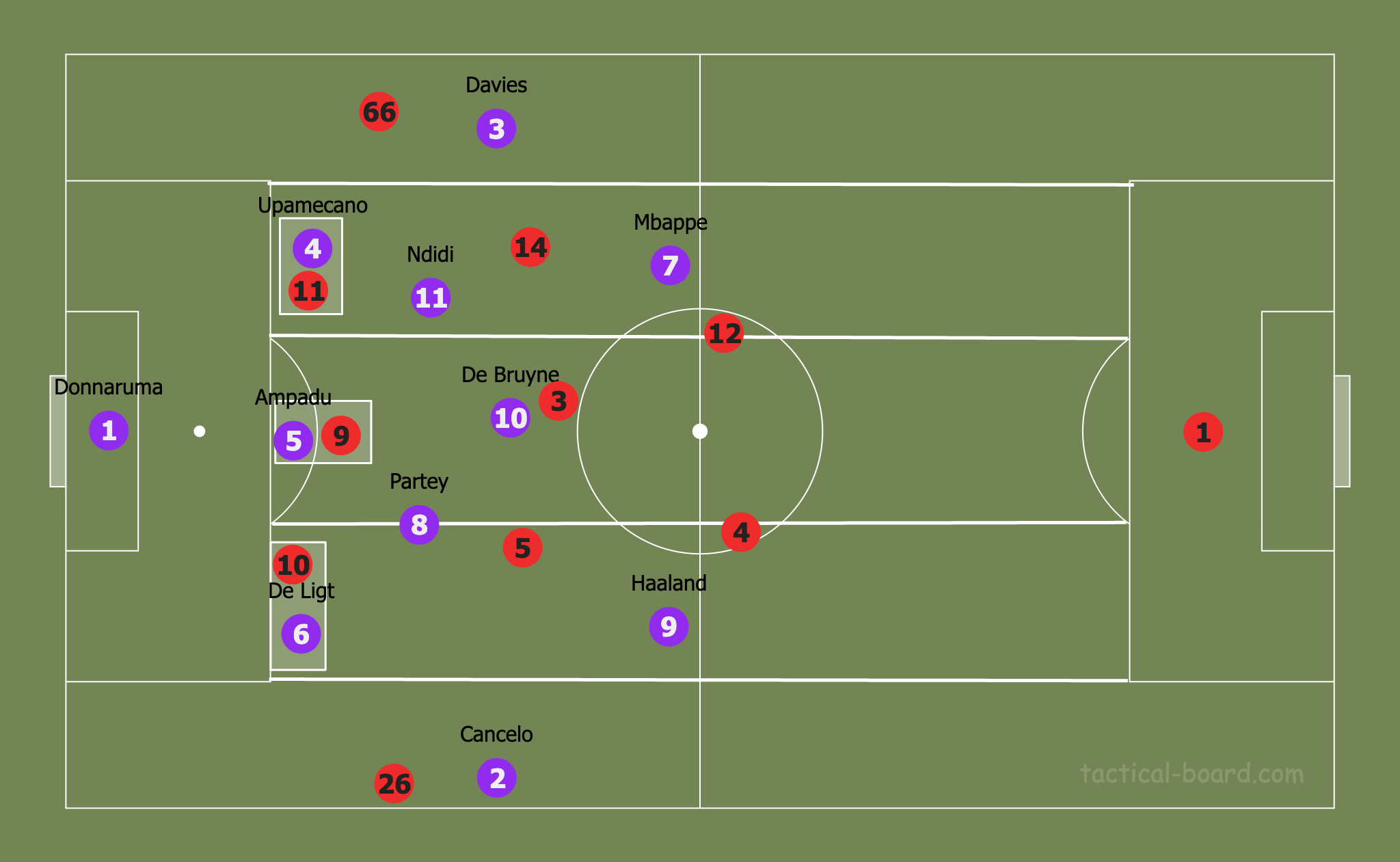 Our midfield will operate in the same fashion in which it did during Liverpool’s build-up, with De Bruyne man-marking Fabinho while Partey and Ndidi defend zonally. The below image shows Ndidi’s and Partey’s zonal orientation. 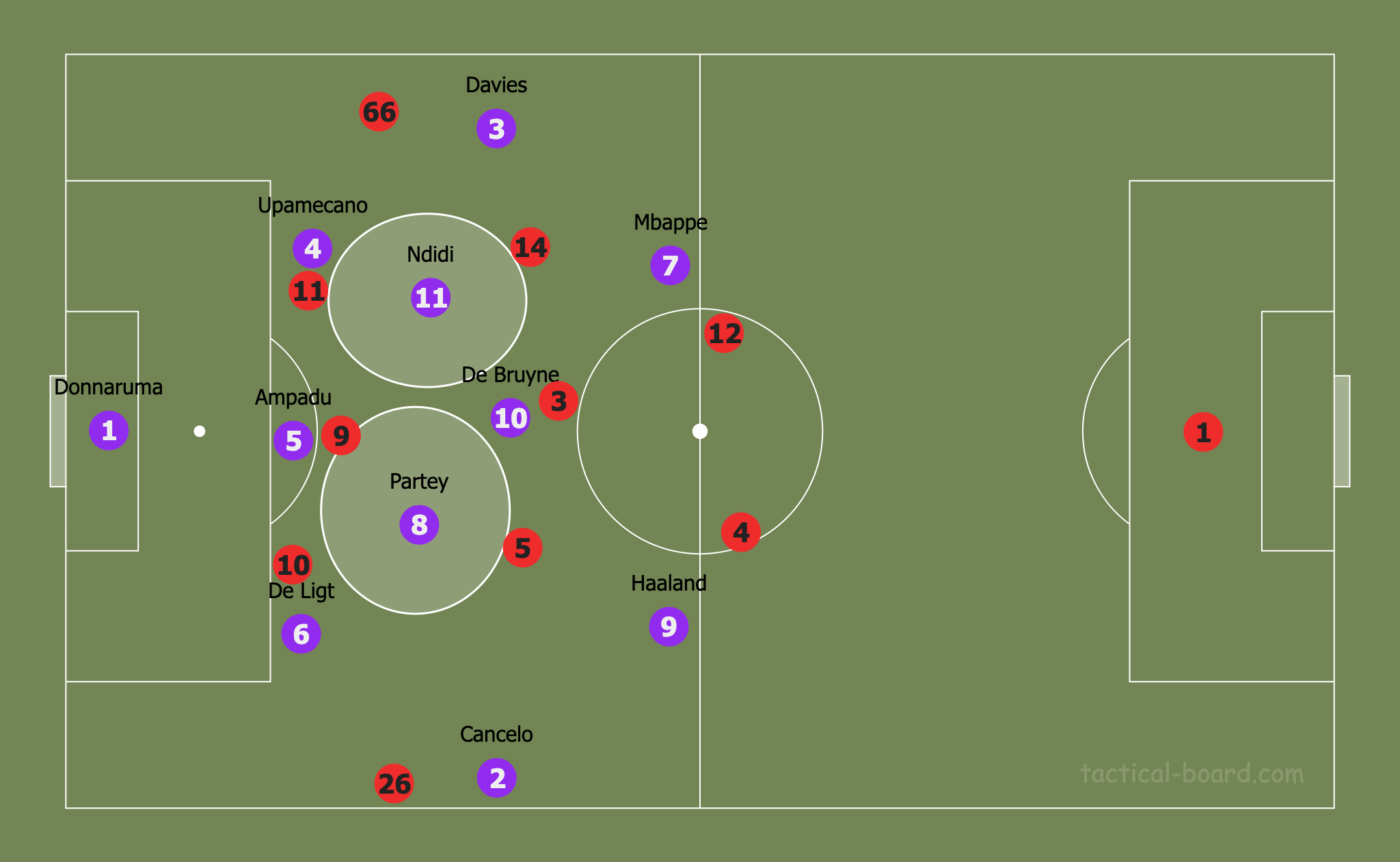 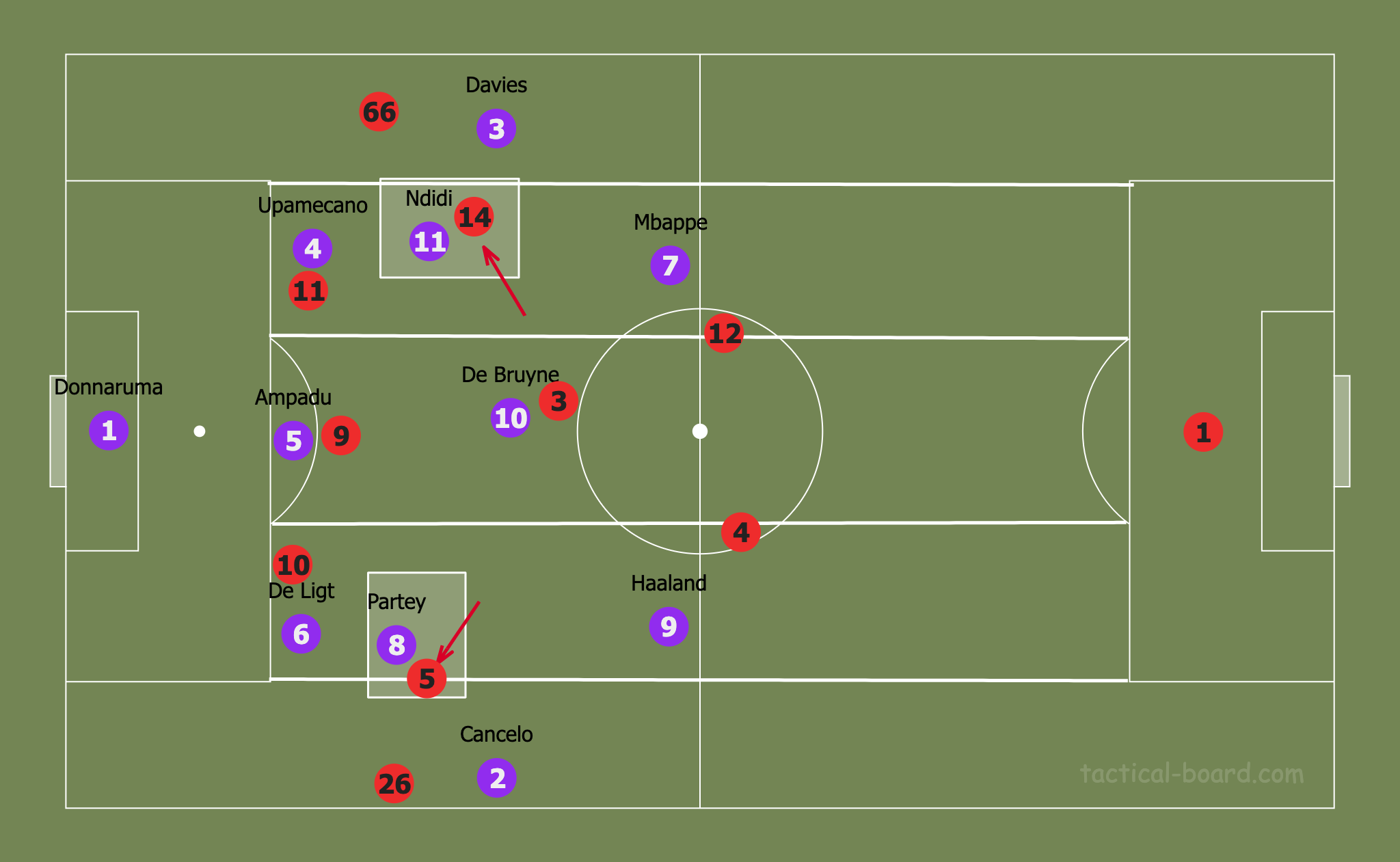 As my side win the ball, we want to spring attacks before Liverpool can reorganise into a solid defensive shape. Mbappé and Haaland both have the pace to run the channels against Liverpool’s high line, and will create a 2v2 in transition. De Bruyne has the passing range to play through passes, and Davies and Cancelo have a headstart vs their respective opponent and can supplement the attack if it slows down. During the entirety of our defensive organisation, Haaland and Mbappé have stayed in their positions in the halfspace to facilitate a potential counter-attack. The below diagram shows how we’ll look to attack as we win the ball. 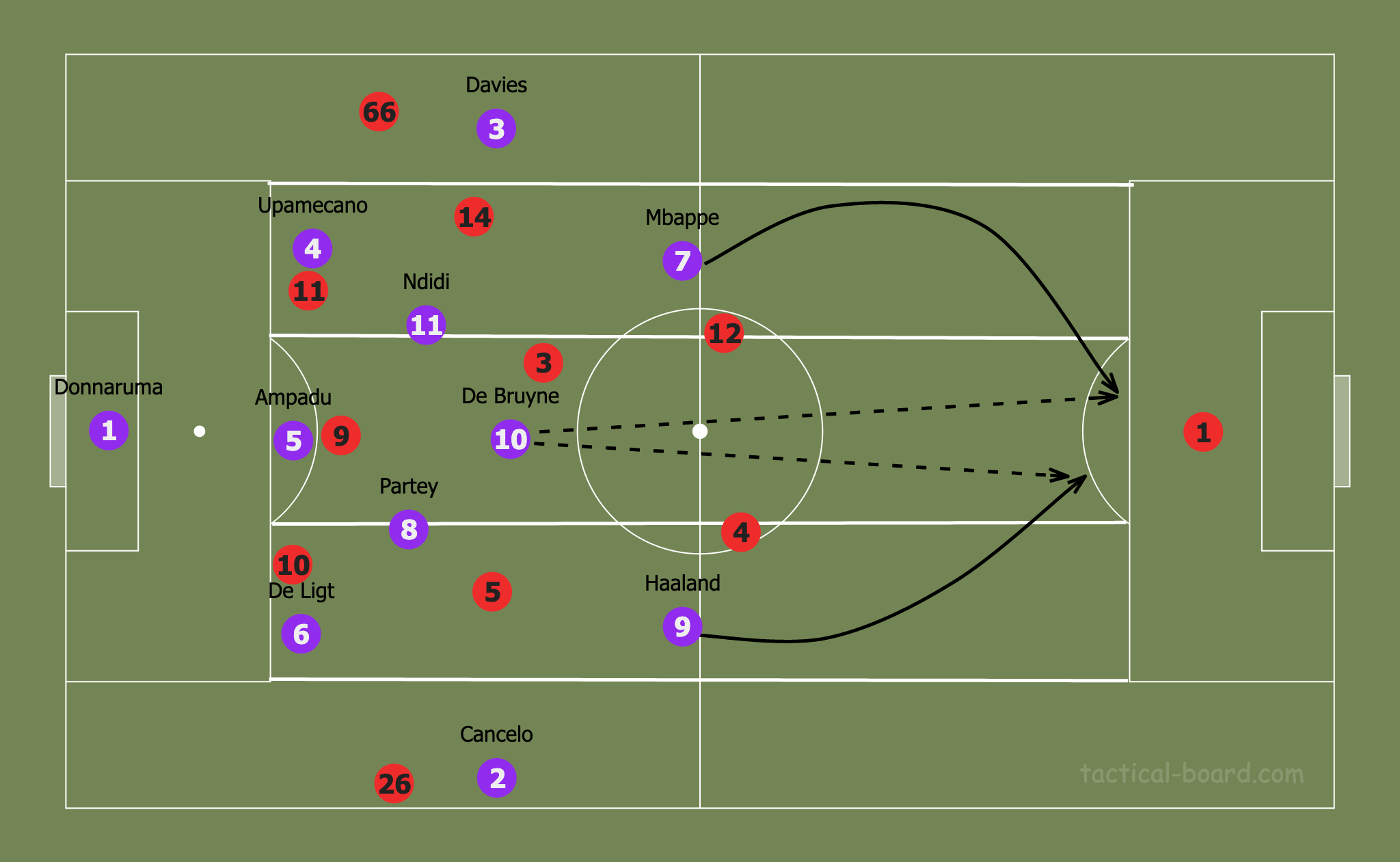 The main theme in our attacking play will be a sudden change in pace, we want to slowly build-up to draw in the press, before unleashing our deadly players when Liverpool are over-extended.

To break Liverpool’s press, we first need to understand how they press.  Firmino covers the centre, while simultaneously cutting out the passing angle to Liverpool’s opponent’s defensive midfielder. Salah and Mané will look to cut out passing angles between our central centre-back and our left and right centre-backs. This is shown in the below image. 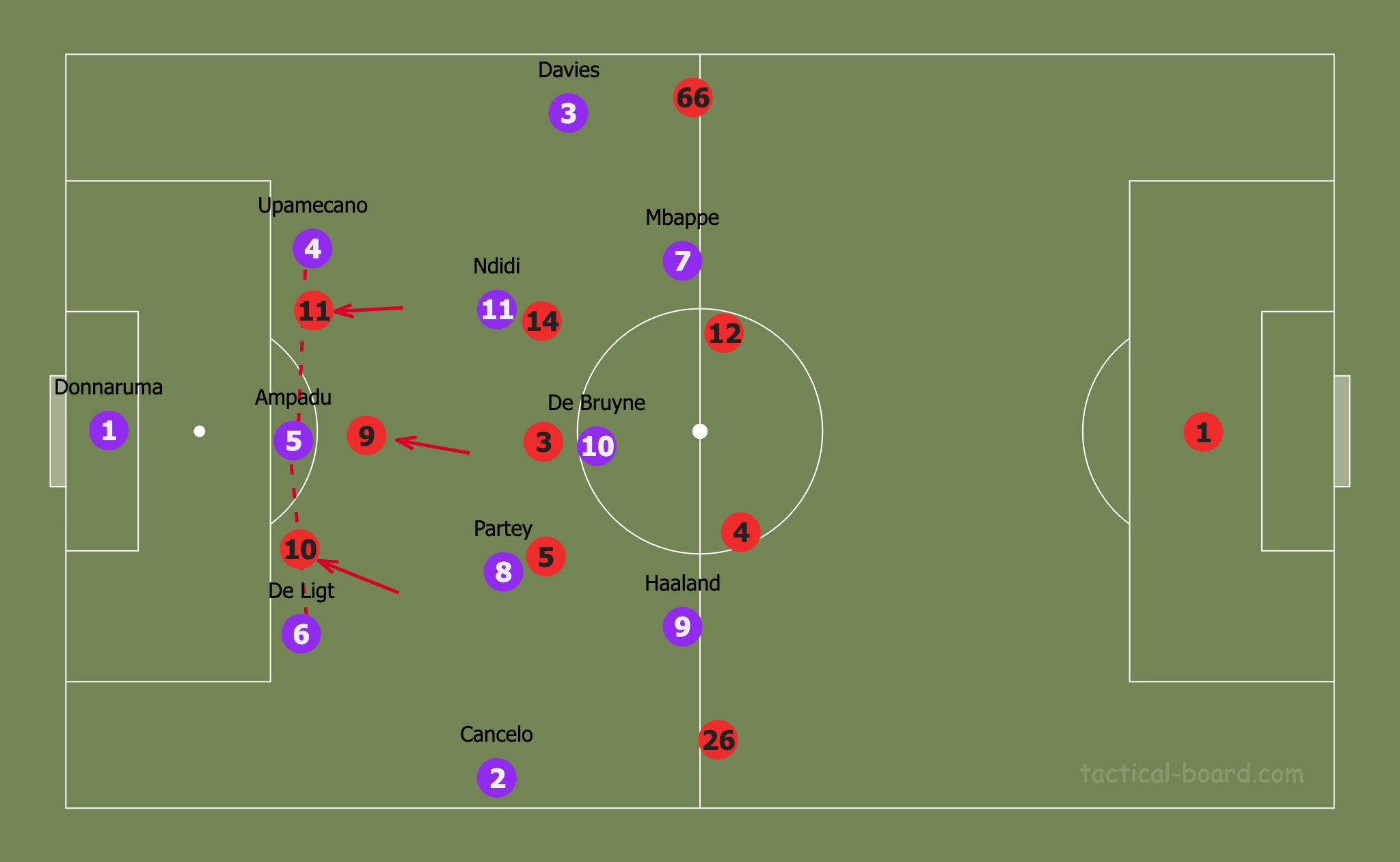 We’ll look to exploit the centre by utilising our hybrid shape. Ampadu, Partey, and Ndidi will all rotate heavily until a gap is created due to Firmino’s defensive dilemma of who to mark. 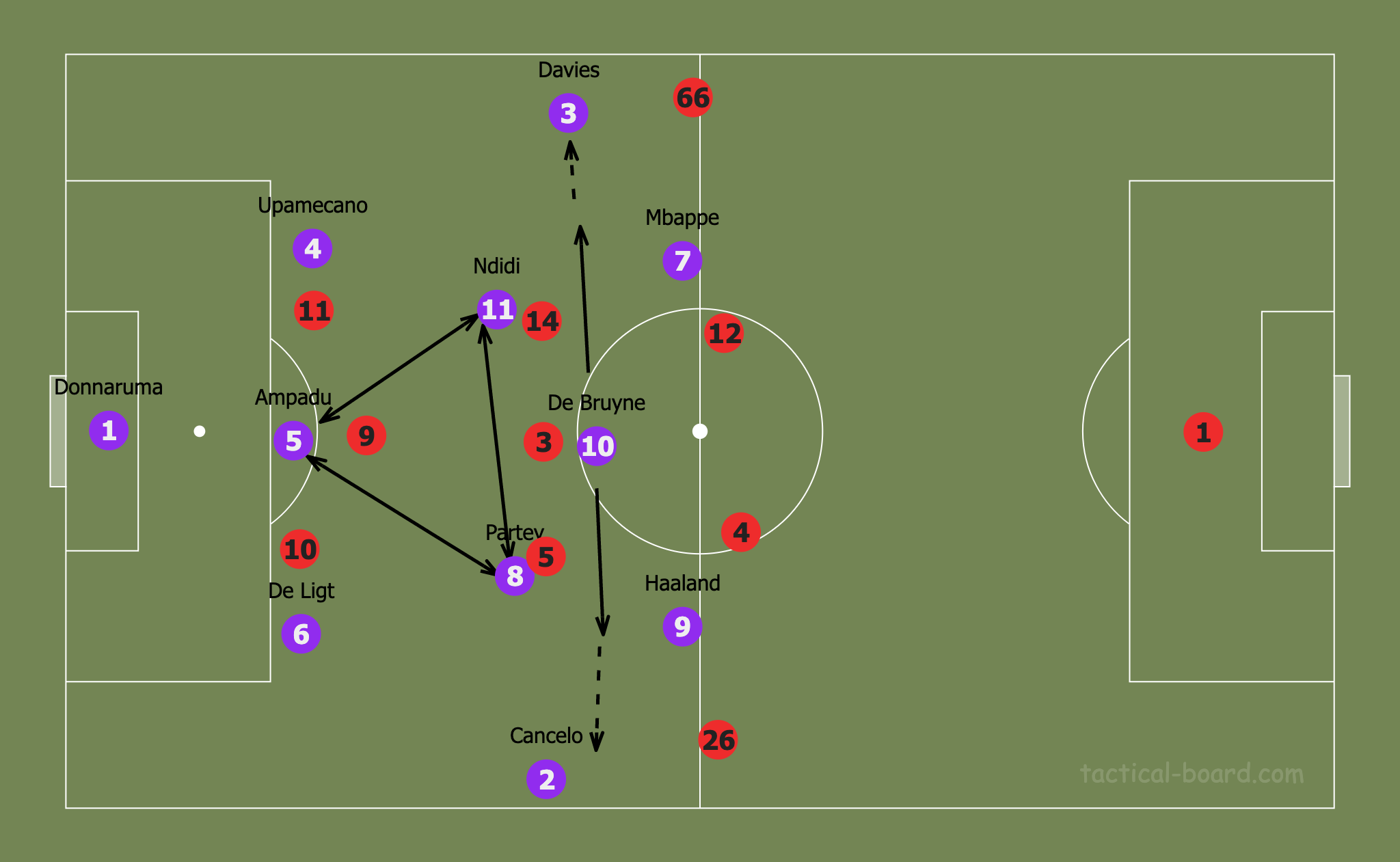 Once the gap is created, De Bruyne will move into the halfspace to receive, with his first priority being a though pass to the strikers. 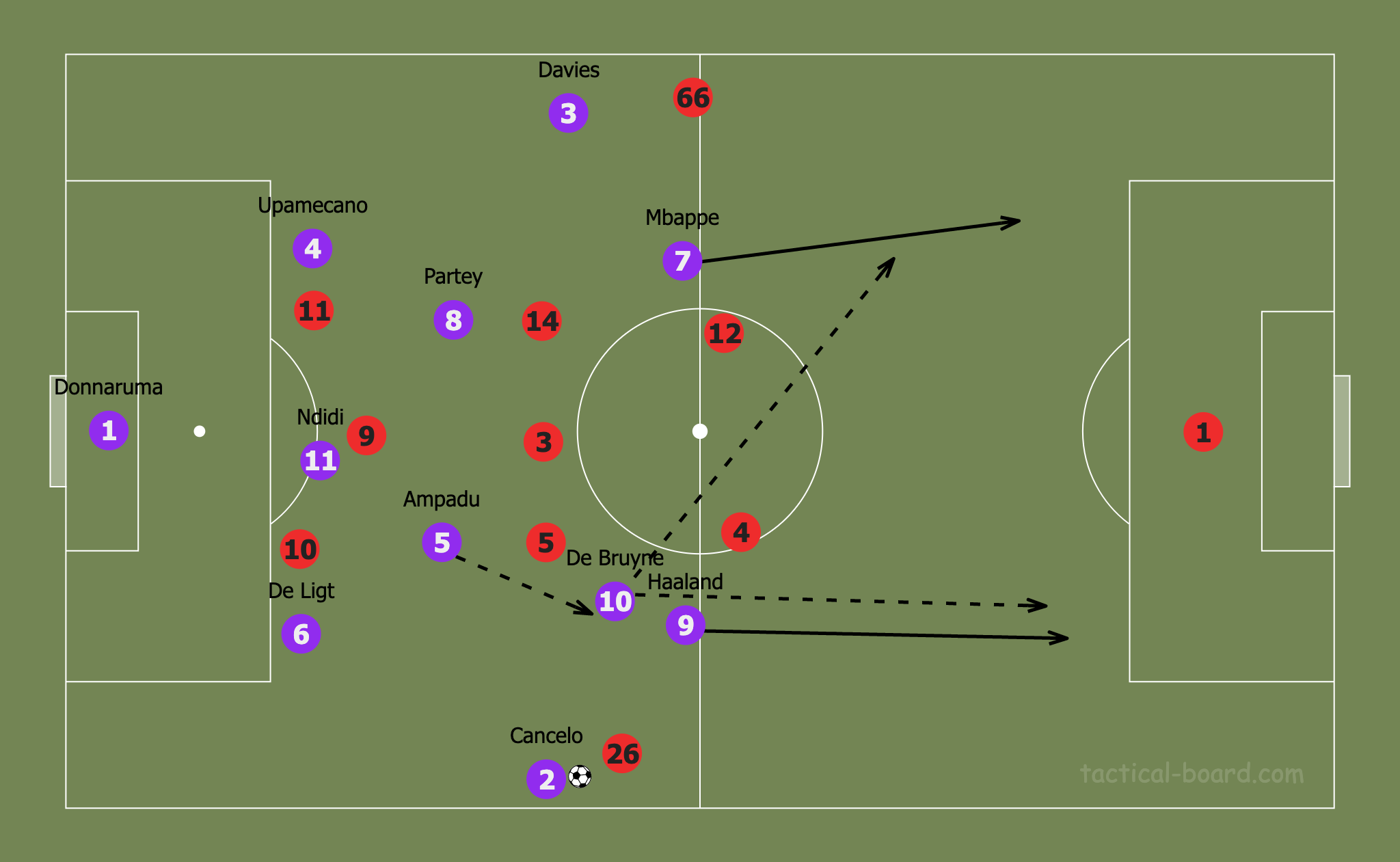 If this is not possible, he will play to full-backs who are in space due to Liverpool’s shape. Once the full-backs receive the ball, we’ll look to draw out the press from Liverpool’s fullback on that side, creating space for a third man movement for the near sided striker to run on to as the near sided midfielder shows for a pass and then plays a through ball. 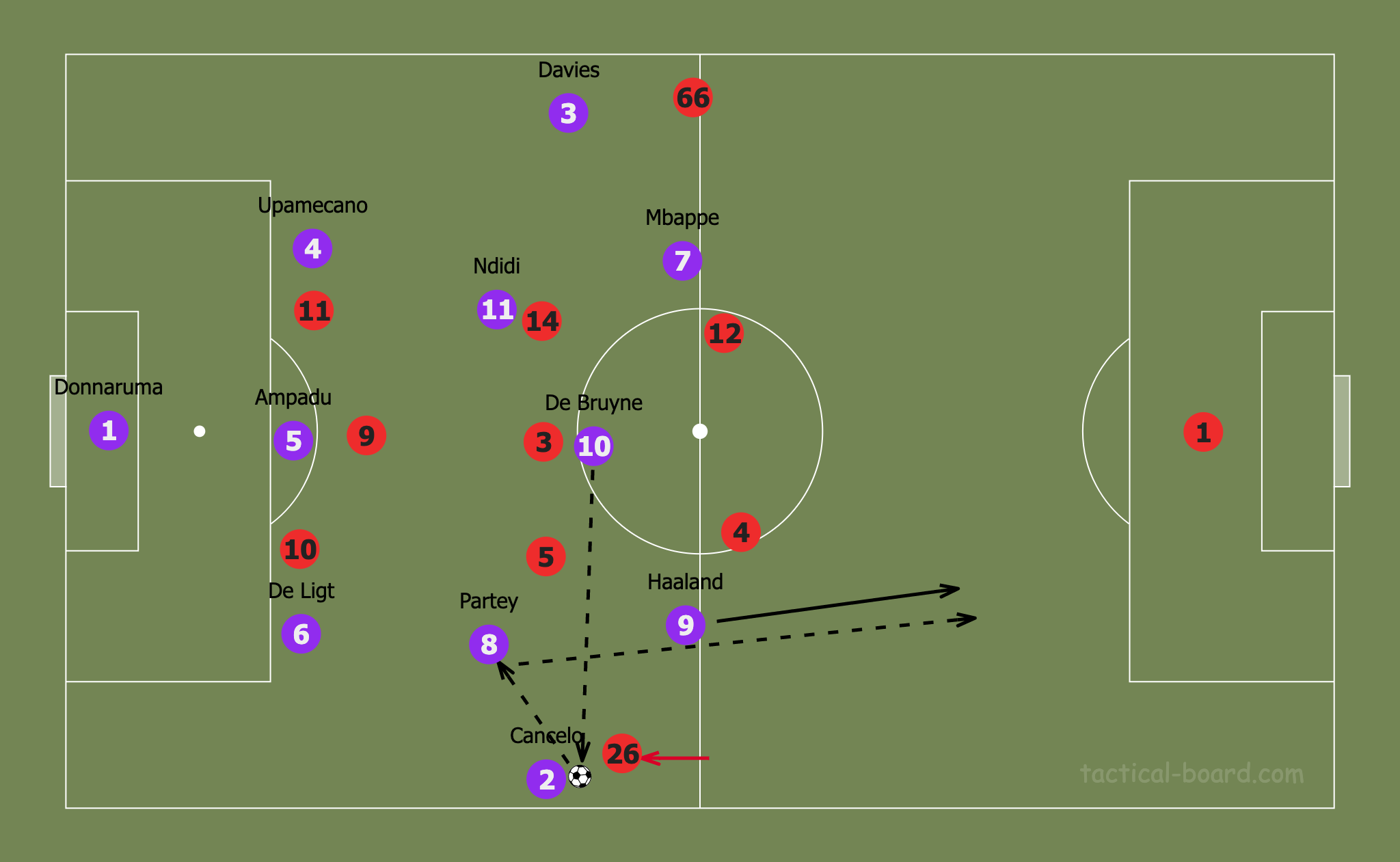 As we lose the ball, our team will try to prevent a dangerous Liverpool counter, this is aided by our lower defensive line, and the fact that we do not commit many players to attacks. We’ll look to regroup into the same defensive shape as mentioned previously.

Despite facing an injury crisis, I have faith that my extremely young team can defeat Liverpool if they stick to their instructions. I’ve outlined a plan which should be able to stifle Liverpool’s attacking play while having the technical and tactical threat to pose issues for Liverpool on the counter. The aim is to snatch a win, looking to frustrate Liverpool by maintaining a solid defence.