When discussing data in the context of football players there are an abundance of metrics that we can consider. From the early days of true data analysis when matches played, goals and pass accuracy were the go-to metrics to today’s game where the likes of expected goals have been surpassed by expected threat and others. Most people who work within football using data will have their own preferences in terms of metrics or models that use a combination of metrics in order to judge the value or ability of a player. I have written about various metrics and methods for this site often enough myself but there is one very simple but very important metric that is often overlooked when people write blogs, post visualisations or even recommend a player in a professional recruitment setting.

It’s so incredibly simple but there is inherent value in a player who has played a large proportion of available minutes for their club in any given season. When a player has a large percentage of available minutes played it signals that they have, generally, been in good form, that they have been valuable to their team and perhaps most importantly from a recruitment perspective they have managed to remain reasonably injury-free. All of these factors are important when assessing a player and also when ascertaining whether they might be a reasonable signing target for your team going into the next season. A player who consistently misses a large proportion of minutes over the course of one or two seasons will automatically raise red flags and the very least this should factor into a reconsidering of the value that you, as the buying team, are willing to put on the signing of a new player. At the same time, however, if a player has played a large % of available minutes over the course of two seasons then you should prepare yourself to have to pay a premium for the services of a player.

There are, of course, other approaches to the use of the data. Player usage data can allow you to find players who may be undervalued for a variety of different reasons. If a player played a high percentage of minutes in the 2020/21 season but has seen his playing time drop off in the 2021/22 season for example then there is a chance that player will currently be undervalued by his club. This could be due to injury or loss of form of course but it could also be due to a new signing or youth player who are taking their minutes. That player may then be of interest as a recruitment target who will come with good value.

Let’s look at some data to see if we can find some case studies to consider. 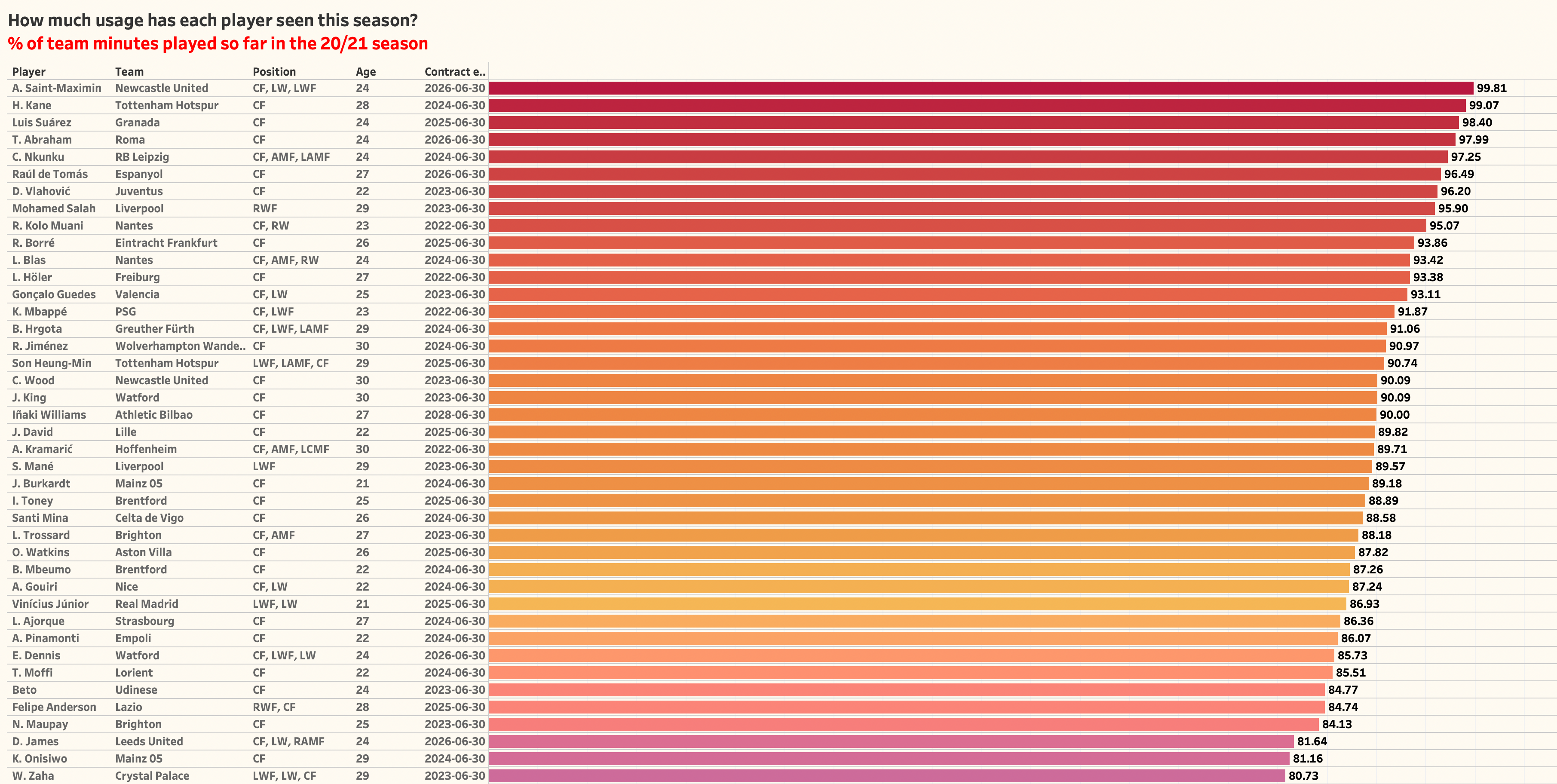 The data set that I am using in the first instance is for all forward players who have played at least 700 minutes so far this season in the top-5 European leagues. As you can see there are some familiar names at the top of the ranking with the likes of Alan Saint-Maximin and Harry Kane being incredibly important players for their club. As we move down the rankings, however, some interesting names start to stand out. Luis Suarez (no, not that one) at Granada is one example of a player who is playing a high % of available minutes for a club that is not performing that well in their respective league.  I would be very surprised if he is not someone that bigger clubs are already tracking.

Then further down the list, we have two players in Randal Kolo Muani of Nantes and Lucas Holer of Freiburg who are playing a high % of available minutes and are out of contract this coming summer. From an availability standpoint, they then become interesting options for recruitment purely due to their level of usage. 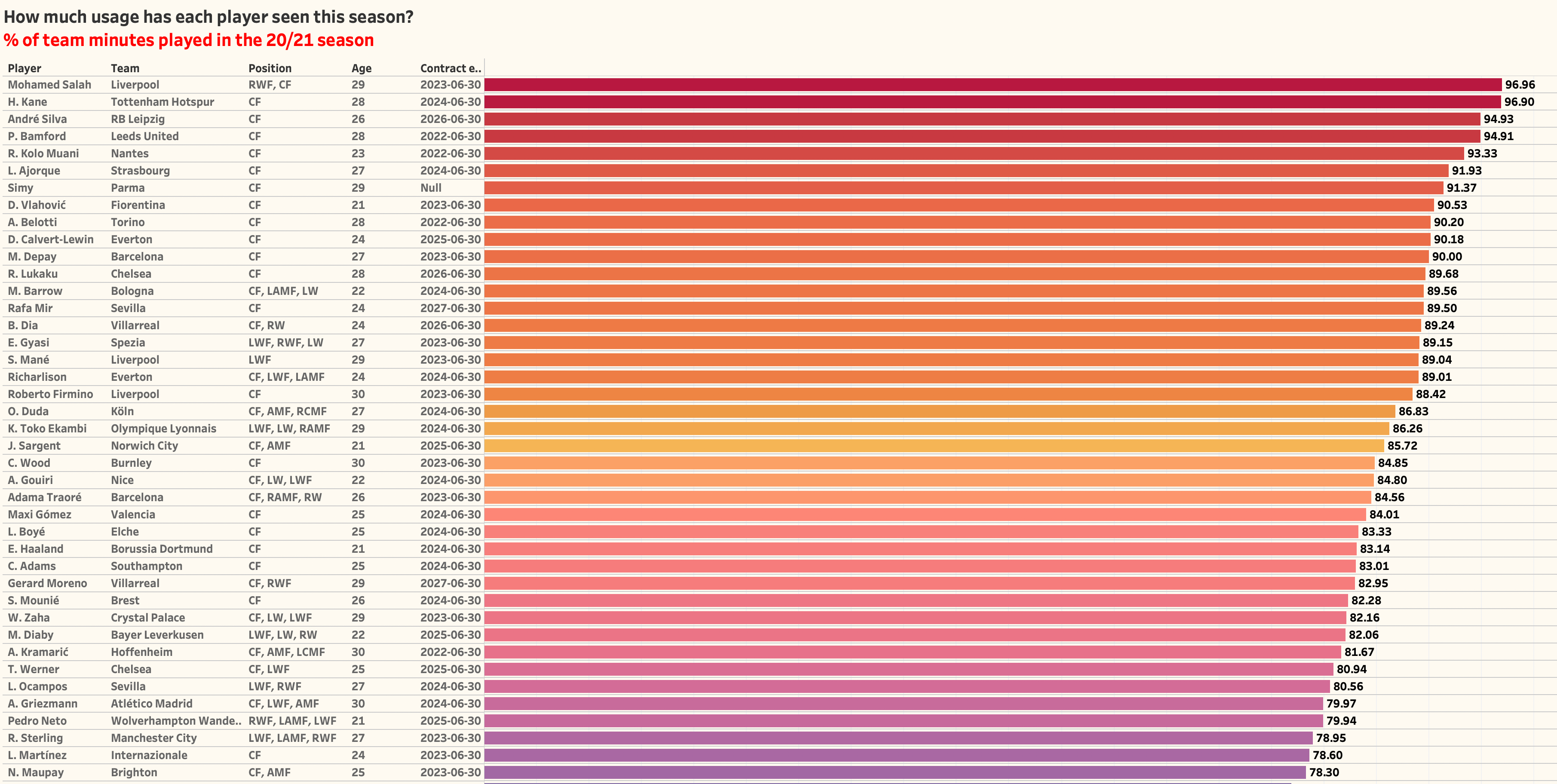 Now let’s look at the same data set, all forwards in the top-5 European Leagues who have played at least 700 minutes but this time in the 2020/21 season. There are again familiar names at the top of the ranking where Mohamed Salah and Harry Kane firmly underscore their importance to their teams. You have to consider that part of what makes them key players for their team is their sheer consistency and ability to play such a high % of minutes in an incredibly competitive environment. Now, let’s start to work our way down the ranking. First of all, we again see the Nantes forward Randal Kolo-Muani feature. For a player who is out of contract in 2022 to have played such a high % of minutes both last season and this season so far should start to highlight his name to several recruitment departments,

We can also, of course, further filter our data to find more targeted options for recruitment.

This time we are looking at central defenders, again in the top 5 leagues, who have played at least 700 minutes and are 23-years-old or under so far in the 2021/22 season, although there are some. Once again there are some interesting names in there. William Saliba is performing well on loan at Marseille from Arsenal. Mohammed Salisu has been performing very well this season for Southampton and Josko Gvardiol has been playing well for RB Leipzig after being signed to replace the departing Dayot Upamecano. It should also be noted that the excellent Nicolas Cozza has been performing well and getting good usage at Montpellier and he is out of contract this coming summer.

Finally, let’s take the same data set but filter the data to show the young central defenders with the greatest % usage in the top 5 leagues last season. Sven Botman is top of the list and he was a very clear transfer target for Newcastle in the summer. Ben White was used heavily by Brighton prior to his move to Arsenal. Jules Kounde was, and remains, a transfer target for Chelsea. Loic Bade, Dayot Upamecano and Cristian Romero are all players who feature in our ranking who got moves in the summer.

So, what does this tell us? Well, we know that data is an important part of the recruitment process but it is not all about using event data or x, y data as part of the player evaluation process. At times one of the most important considerations should be the simplest one. How available has the player been for their team?