Data Analysis: Who says that you can only recruit young for a resale value?

In my weekly article last week I took a look at something that, within football, is close to my heart. I looked at which teams, from a dataset containing teams from throughout Europe, were performing well with a team that had a lower average age than the majority of their immediate competitors. I like young players, always have, and when scouting I have had to adjust my own biases to not automatically favour young players. Instead, I like to view each player in terms of their ability, performances over at least two seasons and then their suitability to the role that he would have at the club that I work for. Age is a secondary, and important, concern along with other factors including but not limited to value (but how do we calculate value?) contract expiry and the current depth of our squad.

Last week I focussed on some interesting case studies and showed that some teams favour youth for a reason. In the case of the Austrian side Red Bull Salzburg, this fits their identity and marketing as a company while in Slovakia MSK Zilina have turned to youth as a result of their financial situation in the wake of the onset of COVID-19.

This week I thought it would be interesting to flip the narrative on its head and to use the same data set to show which teams are performing well with an older average age. I have to confess that I was surprised to see some of the names that the data showed up as some teams that I tended to associate with the recruitment of young players are trending on the older side of our data set. Interestingly, there seemed to be a parallel between clubs that were successful (or even outright) dominant domestically and playing slightly older players. More on this and why I think this might be later though.

Before I get into the article in full though we need to talk about the data set. All data is from Wyscout and as you will see one of our key metrics is the average age, an easy concept that we don’t actually have to go into here in any depth. The second metric that I have used is designed to assess team performance. This is found by simply taking the difference between a team’s xG (expected goals) and xGA (expected goals against) the formula is that simple xG-xGA=performance. I find that this gives us the best idea of performance as a whole.

Which clubs are leaders in this group? 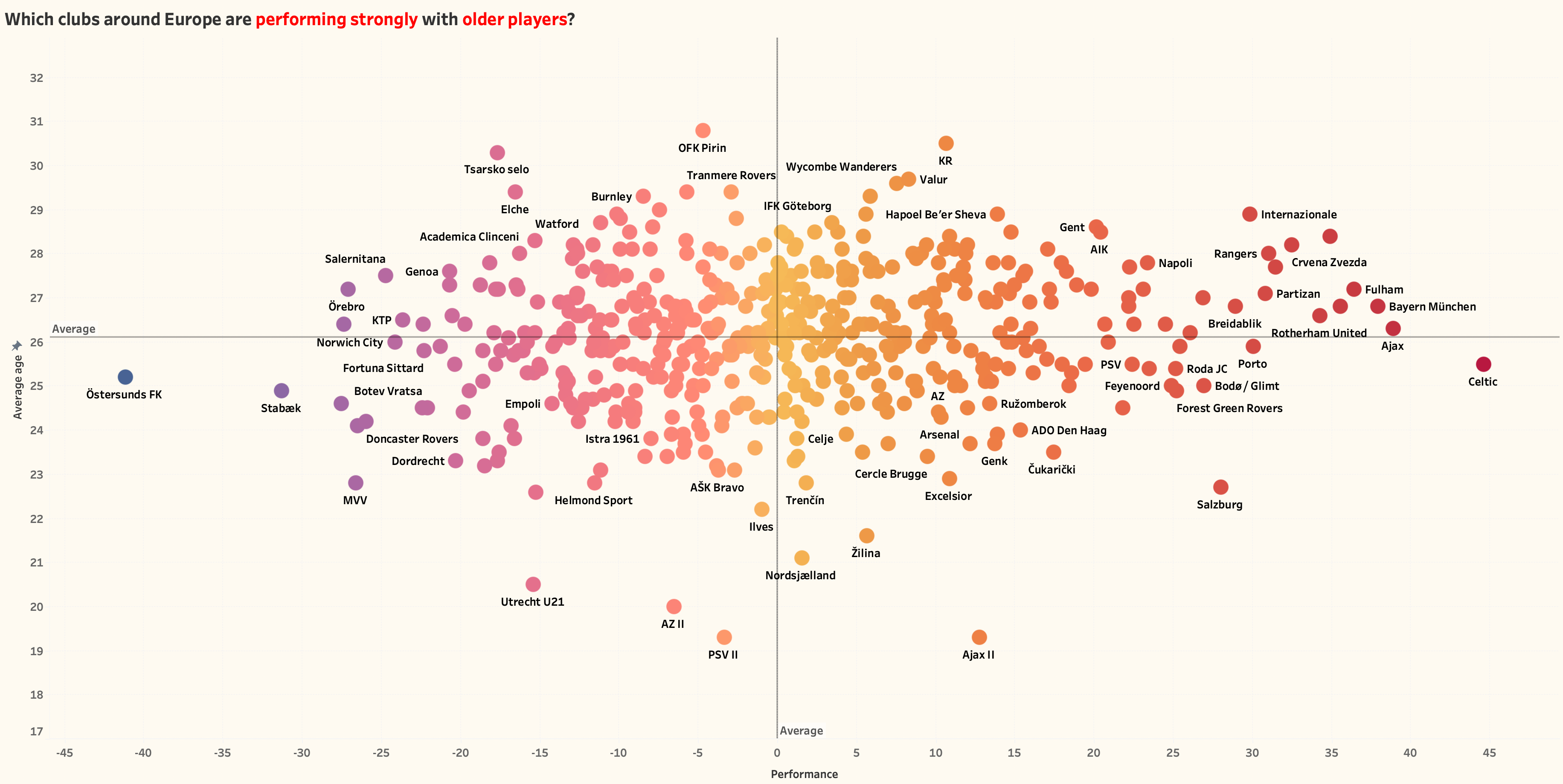 Let’s start the same way that we did last week with a look at the data set as a whole. The difference this week, however, is that I have not reversed the vertical axis. This means that the teams that I will be using this week as case studies are trending towards the top end of the scale and are positioned in the top-right quadrant.

Now, you can start to see what I mean. The likes of Bayern Munich, Rangers, Internazionale and Crvena Zvezda are all relatively dominant domestically. In the case of Crvena Zvezda, I would have always associated them with having a younger squad and favouring youth players. I think that after reflecting on some of the teams we are seeing here it is clear that success, especially domestically, can lead to stability within the squad and less overall churn. This means that teams are more content to keep players over the medium to long term and in effect, teams are ageing effectively. There does still, of course, come a point where the squad will have to be refreshed and when recruitment of younger players becomes important. I guess that domestic success though will mean that these clubs will have the finances to deal with that when it comes.

Let’s pause for a second though and take a more in-depth look at the top-right quadrant of the graph. 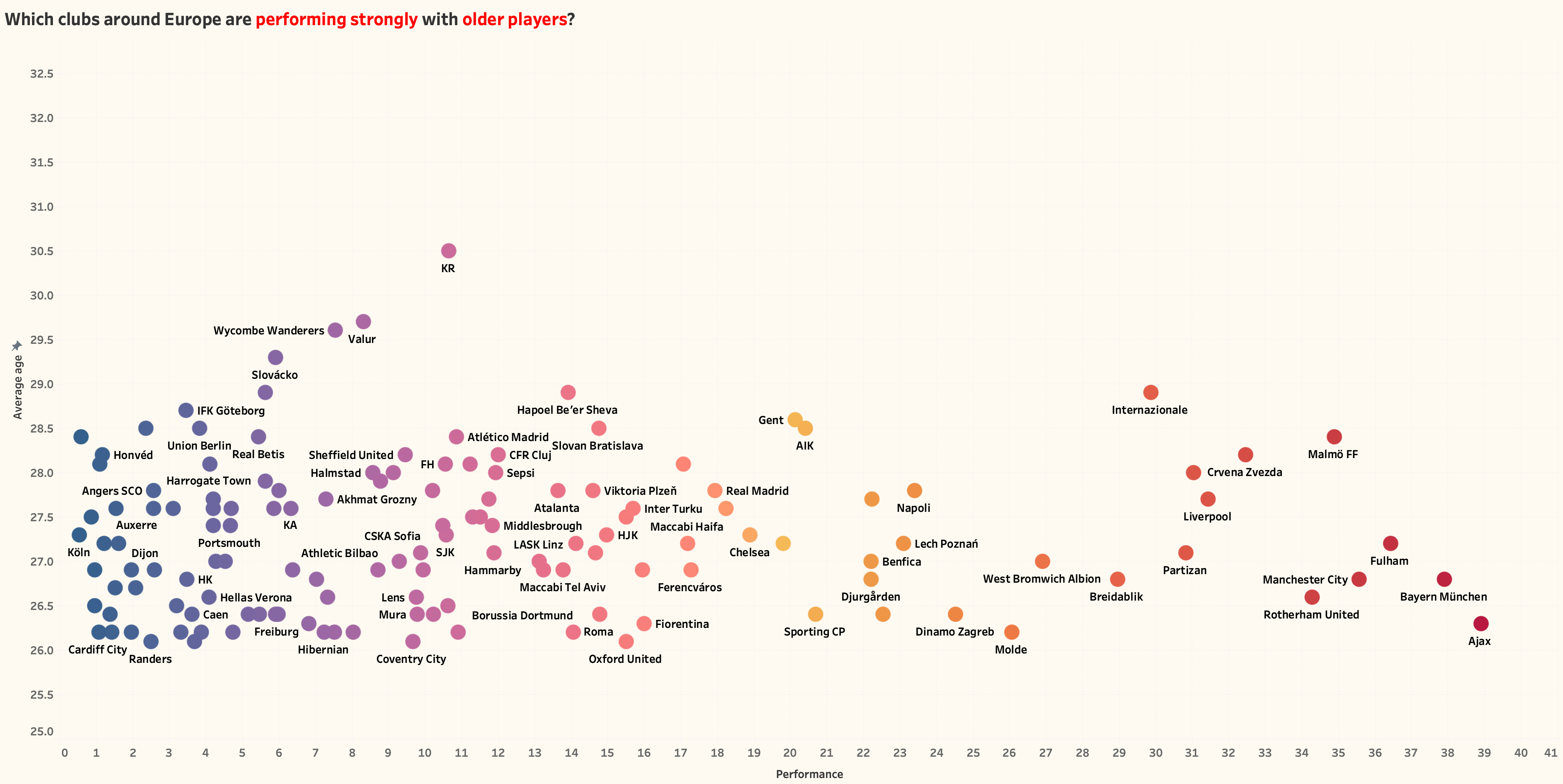 All that I have done here is filter the data so that we only have the teams from the top-right quadrant in our view. I have set the minimum average age as 25 and the minimum performance score as 0 and now we see more of the names in the part of the data set that is most interesting.

First thing though – see! I was right. Look at some of the teams that are now visible. Real Madrid (dominant domestically) Benfica and Sporting CP (partially dominant domestically) Liverpool, Chelsea and Manchester City (are these the top-3 now in England?) Middlesbrough (Ok, fair enough, the theory isn’t perfect).

It is also interesting to note some surprising names here. Borussia Dortmund, perhaps lead by the ageing Mats Hummels and Marco Reus, and Atalanta are here. Time for a squad refresh perhaps?

Now let’s take a deeper dive into the data and identify a few teams to take a closer look at. This will allow us to see if there are any trends in terms of positions (*cough* Goalkeepers *cough*) in which teams tend to play older players.

I have to admit that I love this one for slightly immature reasons. Even as someone who is lucky enough to work within football I constantly (and I actually mean constantly) get confused between Gent and Genk. I should probably take the opportunity to apologise to fans of both teams here. The reason that this amuses me is that Genk were one of the teams that I looked at in more depth last week when profiling teams who were being successful with younger players. It’s an interesting comparison to see Gent performing well with an older average age.

Overall it is fair to say that Gent actually have a relatively balanced squad in terms of their age profile. Yes, there are some players on the older side of the scale who are getting regular minutes but you could say the same about the younger ages although they tend to have more youth at the fullback positions.

The biggest concern for Gent from a squad building perspective is probably in the striker positions where Depoitre, Mboyo and Tissoudali are all above the average age of the squad while getting regular minutes.

Other than that we could see them start to trust younger players more with the likes of Hjulsager and Owusu looking like they could break the starting lineup going forward.

Is there a more surprising team on the list here than Ajax? They are, of course, famed for their youth development and in trusting young players but here we are and the data doesn’t lie. Indeed having Ajax appear in the list of clubs that we can take a closer look at lets us have a conversation about the shift in policy in terms of recruitment at the club in recent seasons.

Look at the top-right section of the squad vis for example. While the likes of Daley Blind (31) and Davey Klaassen (how is he only 28??) are homegrown they have both returned to the club following periods abroad. The others Dusan Tadic, Sebastian Haller and Steven Berghuis have all been signed for significant outlays as Ajax transition to a blended model with experienced internationals being brought in to supplement the young talent within their squad. We also have a set of players in Alvarez, Martinez and Mazraoui who are edging towards the older side of the squad list.

This blended model also fits with the theory from above that successful teams that are dominant in their domestic clubs can afford to allow the team to develop and age together.

Next up we have another side that I would have generally associated with playing and developing younger players in Crvena Zvezda (or Red Star Belgrade for older readers) in Serbia. They are perhaps the most extreme example that we have chosen with nine first-team players in the top-right quadrant and two more on the edge.

The goalkeeper (it’s always the goalkeeper) does of course push the average age up but they desperately need to add younger options in the attacking midfield and central midfield areas of the squad. They do have the likes of Stanic and Nikolic as central midfield options and both are highly regarded young players. The squad is definitely light in terms of attacking midfielders though.

Where though is the push for them to do so? As long as they are performing well domestically there is no immediate need for them to refresh things. A smart club, however, would already be looking to do so.

The final team that we will look at are an interesting case study because this data is actually from the 2021 Allsvenskan season with the 2022 season due to kick off in the next month or so. This means that it would actually make for an interesting follow-up article to compare this squad composition to the way that their squad looks now following pre-season recruitment. Have they taken the opportunity to refresh their squad and get younger? (I don’t actually know the answer but will pause here and go and find out)

Strikers and fullbacks appear to be the biggest issues here. Interestingly, these are also the positions in which teams tend to try to be younger given the fact that players typically need to be more athletic and explosive in order to play in these positions effectively.

So what have I learned from the last two weeks worth of articles? Well, there is no one way to build a squad. Squad building is dependent on so many factors, both internal and external, that we cannot simply say that the best method is to sign young players with an eye on resale value.

The answer might be, and this may seem boring, is that it is best to maintain balance in your approach to recruitment. That, and make sure that the players that you bring in are a fit for your team in terms of the game model and alignment.