It’s no secret that RB Salzburg belongs to the clubs which develop the best talents in Europe. And it is also no secret that most of them move to RB Leipzig at one point. Due to the history of Red Bull ownership, both teams are closely connected.

During the transfer period in January one of the most promising talents of Salzburg, Amadou Haidara moved to Leipzig and recently scored his first goal in the Bundesliga. Hannes Wolf will follow in the summer and maybe also Xaver Schlager. Or is he the exception?

Nevertheless, the blond midfielder of Salzburg belongs to the most promising talent production lines in European football. However, his lack of consistency could lead to a fairly low buying price. It could present a chance to land a real steal, because Schlager is incredibly talented. In this piece, I will show you why more teams should take a close look at the Austrian midfielder.

In Marco Rose’s diamond at RB Salzburg, Xaver Schlager usually plays in either the left or right central midfielder position. From this position, he supports the attack, participates in combination play and helps Salzburg to stay compact when opponents are in possession.

In this role, Salzburg can make use of Schlager. The Austrian international has a unique skill set. Not only is he a good passer, but he has also the necessary IQ and the dribbling skills to keep possession under pressure and break down the opponents’ defensive lines easily.

In particular, his football IQ is constantly visible. It is rarely observable that he makes a bad decision, plays a stupid pass or overlooks a teammate. Due to his technical abilities, he is capable of either playing simple passes under pressure, using long balls to take advantage of holes in the defence or finding his teammates with well-timed through-balls.

At Salzburg, he often acts out of a deeper role in possession. His vision and ability to switch is really important in these situations. 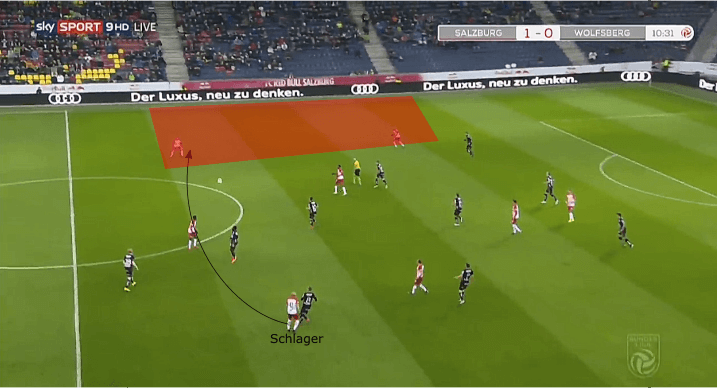 Take the above example. Schlager gets pressured by the Wolfsburg player but recognises the free man on the left side. Wolfsburg were quite compact close to the ball but underloaded on the far side. With the intelligent switch of play by Schlager, Salzburg can attack down the left side where they have a 3v2 situation.

The passes of the Austrian midfielder are often precise and allow the receiver to instantly continue the action. As a consequence, Salzburg don’t lose the speed or dynamics of their move, and the opponents have less time to adjust. 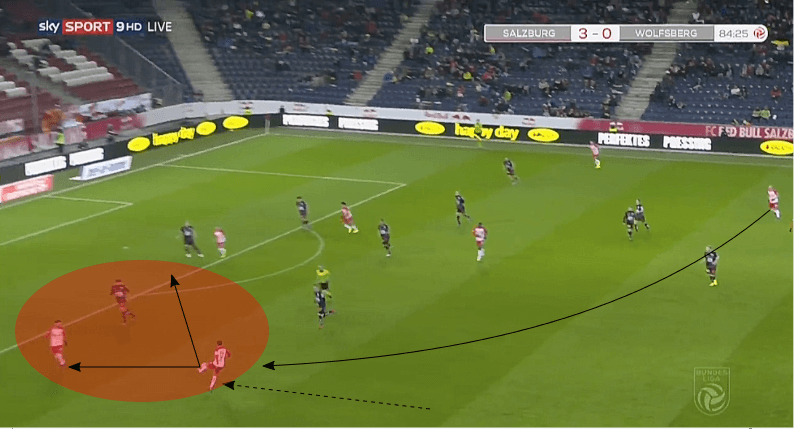 Again, Salzburg use the openings on the left side due to the switch of Schlager. Although Wolfsburg are compact enough, Marco Rose’s team can easily attack the left side because Andreas Ulmer moves forward late. Because of Schlager’s well-timed pass, which wasn’t played directly to Ulmer but rather into the open space, the left-back is capable of continuing the attack with his second touch.

The skill set to survive under pressure

Schlager can also be effective between the lines when he has to receive the ball under pressure. His ball control and first touch are on an extremely high level. The constant screening of the situation, the positioning of his teammates, opponents and the ball allow him to plan one step ahead.

Regularly, he not only controls the ball perfectly but with his first touch he already prepares the next action he wants to execute. 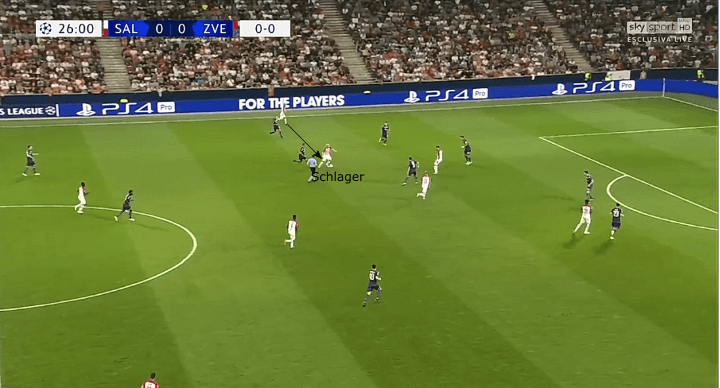 Here, for example, he receives the ball between the lines, turns around with his first touch and faces the goal immediately. Consequently, he can attack the defence by passing or dribbling. 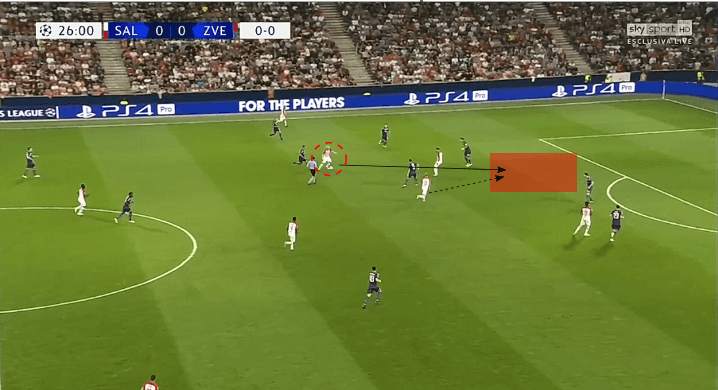 The rare skill Schlager possesses is the vision for holes in the defence. You rarely see a player who decides so quickly and recognises potential passes behind the last defensive line that often. It seems that Xaver Schlager always thinks one step ahead. Those passes are extremely risky. Sometimes he tries to force them, but it represents a constant threat for the defence. 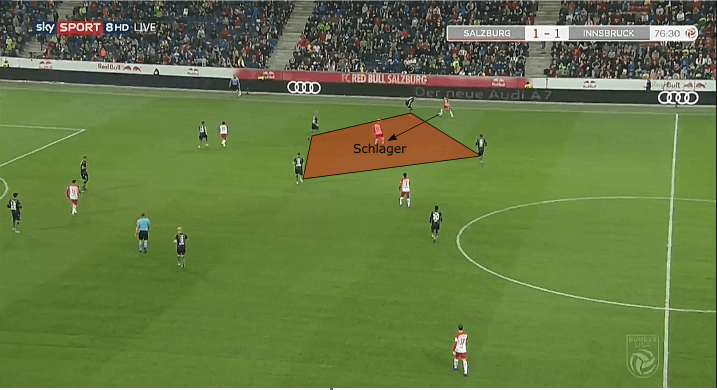 Again, he receives the ball between the lines. Because of the fact that he checks his shoulder multiple times per minute, he recognises the available space and turns around with the ball. Different options to continue the attack become available for the midfielder. He could either pass the ball to the midfielder next to him, switch to the other side or attack the space behind the defence with a pass. 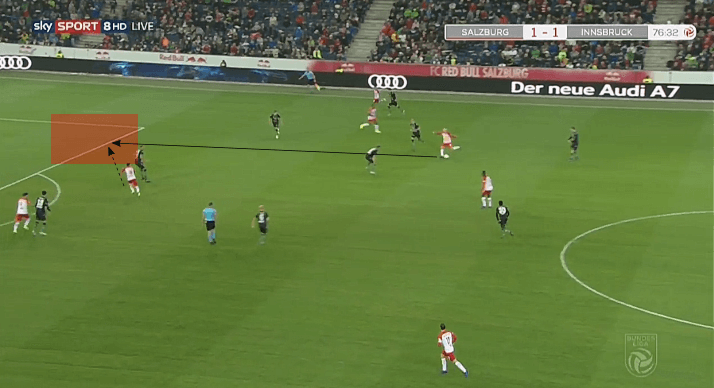 In the end, Schlager chooses the through-ball. Due to the distance between full-back and centre-back, the pass makes sense and again, it’s impressive how quickly he identifies the available space.

Schlager’s through-balls are especially impressive because he is capable of assessing the dynamic and positioning of the defenders. Consequently, he finds holes in the defence constantly and quickly. With 1.99 through-balls per game and 2.54 passes into the box, Schlager shows that he helps his team to get into the dangerous zones.

Although he usually plays in a deeper position on the right side, this ability just shows how complete Schlager is as a midfielder. His attacking talent is probably going to develop in the future.

In this situation, he doesn’t play the risky through-ball to Munas Dabbur who attacks the space behind the defence, but uses the space which Dabbur opens with his run. Therefore, Salzburg attack the holes in the defence dynamically which is harder to defend for Brugge.

This sense for space and movement is extremely helpful, especially after short dribbles which Schlager uses to create space and draw players towards him. In the next example, he receives the ball in the centre and is able to shake off Napoli’s Allan. 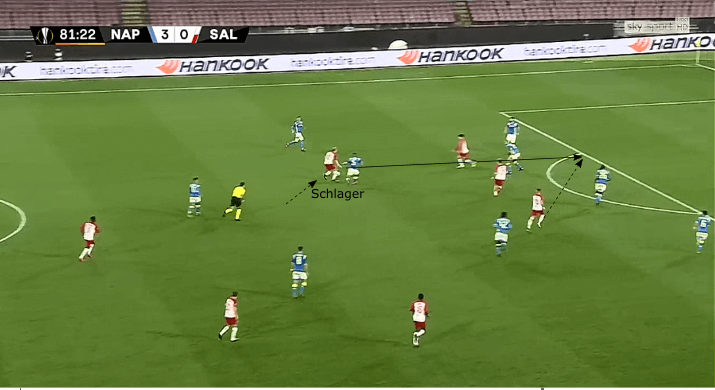 The defence only focus on the two players right in front of them and forget about Fredrik Gulbrandsen who attacks the space behind. The timing and precision of the pass are perfect and help RB Salzburg to get behind the last line.

Furthermore, the ability to solve situations under pressure does help Salzburg in the build-up process. Especially when the opponent is pressing aggressively, Xaver Schlager is important for solving those situations.

Here, Austria can advance into higher zones due to the intelligent first touch of Schlager.

We could already identify his attacking potential, but Schlager also stands out on the defensive end. Although he doesn’t win a lot of his defensive duels (25.6%), he intercepts passes quite often. His 4.34 interceptions per game can be an indicator of Schlager’s good positioning and intelligent defending.

In order to be positioned correctly, Schlager has to scan his environment constantly to adjust his position. Similar to his behaviour when his team is in possession, he also does it once he has to defend. Therefore, he is able to intercept passes. 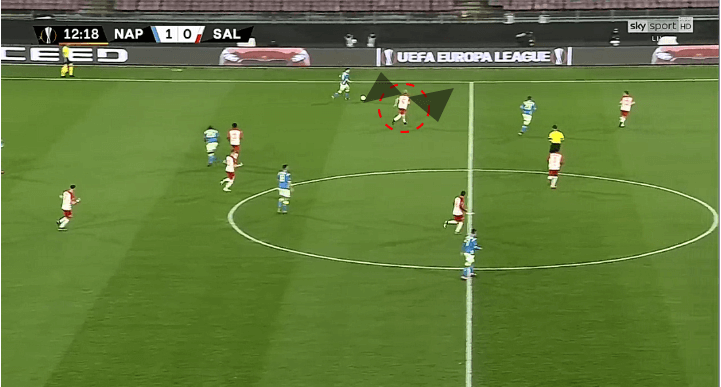 Besides his ability to intercept passes, he is also great at recognising pressing triggers. he looks for certain actions, body positions or first touches which are disadvantageous for the ball carrier, and are therefore ideal moments to start pressing. 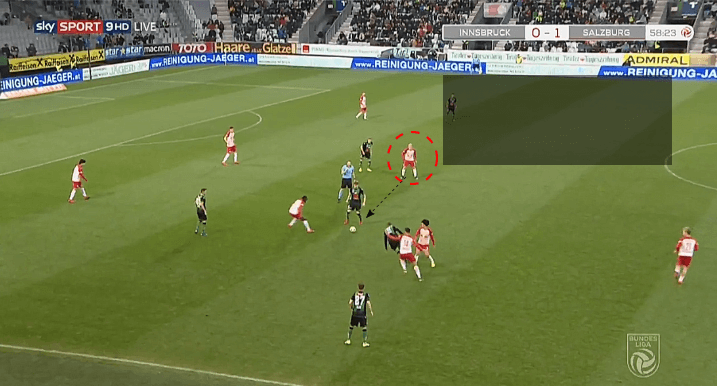 In this situation, for instance, Xaver Schlager realises that the Innsbruck player who receives the ball didn’t check his shoulder nor has any direct passing option. However, if he turns with the ball, his team could attack the far side which is open. Schlager reads the situation well and starts pressing immediately to deny the turn with the ball. 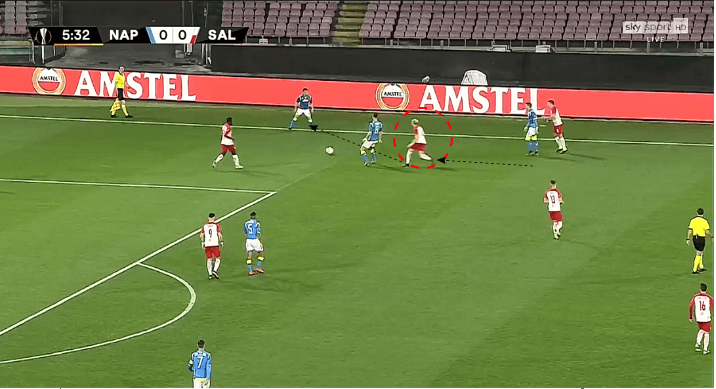 Also, he shows his potential defensively. Not only does he quickly press the passing option, but continues once the ball is played to the isolated full-back. Overall, the aggression of Schlager against the ball is one aspect which distinguishes him from other players. Although some of his challenges are too quick and uncontrolled, he is often capable of forcing the player into a disadvantageous situation or making a mistake.

The aspect we discussed above, the aggression of Xaver Schlager, sometimes turn into a weakness when he presses too aggressively. Either he gets beaten by the opponent because he is too unbalanced, or he has to foul. However, RB Salzburg’s playing style naturally leads to more fouls due to their aggressive pressing.

Furthermore, Xaver Schlager lacks consistency. He shows his brilliance quite often, but not on a consistent level. There are games in which he disappears and isn’t able to help his team. For example, those brilliant passes he plays don’t always leading to satisfying results. If he can become a more consistent passer, Schlager could not only be a dominant threat in some games but in every game, no matter which position he occupies in midfield.

All in all, Xaver Schlager is one of the most talented midfielders in Europe. He possesses a variety of useful skills and he can play more or less every position in central midfield. It would be a surprise if Leipzig don’t sign him in the summer. From a quality standpoint, he would improve the midfield of the German side and could further develop under Julian Nagelsmann.

If he doesn’t sign for Leipzig, Schlager is the player teams like Borussia Dortmund, Bayer Leverkusen should chase. It is going to be interesting where he will play next season and how he develops in the future. Without question, the Austrian midfielder belongs to the players to watch and follow this season and during the transfer period.