Vinicius Souza arrived in Europe in the summer of 2020 from Brazilian giants Flamengo, joining Belgian second division side Lommel for a modest fee of 2.5 million euros. After an up and down first season with the Belgian second division side (Lommel are owned by Manchester City‘s owners, the City group), Souza was sent on loan to Belgian Pro League side Mechelen for the 2021/22 campaign, where he excelled.

These performances on loan at Mechelen attracted the interest of some bigger sides across Europe, with the likes of Celtic and PSV Eindhoven having an interest in signing the young Brazilian midfielder. However, the race was won by RCD Espanyol, with the La Liga side signing him on a season-long loan, adding another recruit to new manager Diego Martinez’s squad.

This tactical analysis and scout report will take a closer look at some of Vinicius Souza’s strengths, as well as examine whether a jump to La Liga is the correct move for the 23-year-old Brazilian midfielder. 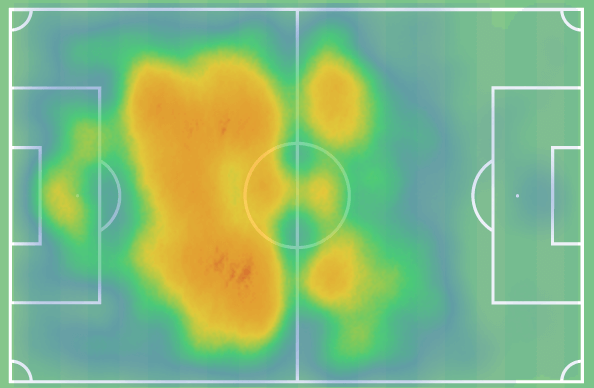 As the heat map above shows, Souza is a defensive-minded midfielder, with most of his actions occurring in his own half of the pitch. Last season under Wouter Vrancken, Mechelen often utilised a 4-2-3-1 formation, with Souza operating as the defensive half of the deeper lying double pivot.

During his time with Granada, Diego Martinez also preferred a 4-2-3-1 formation, so it looks as if Vinicius Souza may be a perfect fit for Martinez at Espanyol. While the step up from the Belgian Pro League to La Liga is rather large, this scout report will analyse some of Souza’s strengths, and why he has the perfect profile to become the defensive midfielder that Diego Martinez needs at Espanyol.

One of Vinicius Souza’s greatest strengths is without doubt his range of passing. Souza could be classified as a deep-lying ball progressor, similar to Granit Xhaka at Arsenal or Jorginho at Chelsea. Last season for Mechelen in the Belgian Pro League, Souza attempted 42.99 passes per 90 minutes, with 84.6% of them being accurate.

Souza also has a tendency to attempt long passes over the top to bypass oppositions defensive lines. Last season, Souza attempted 4.96 long passes per 90 minutes, with a success rate of 56.7%. This section will show some examples of this great range of passing that Vinicius Souza possesses. 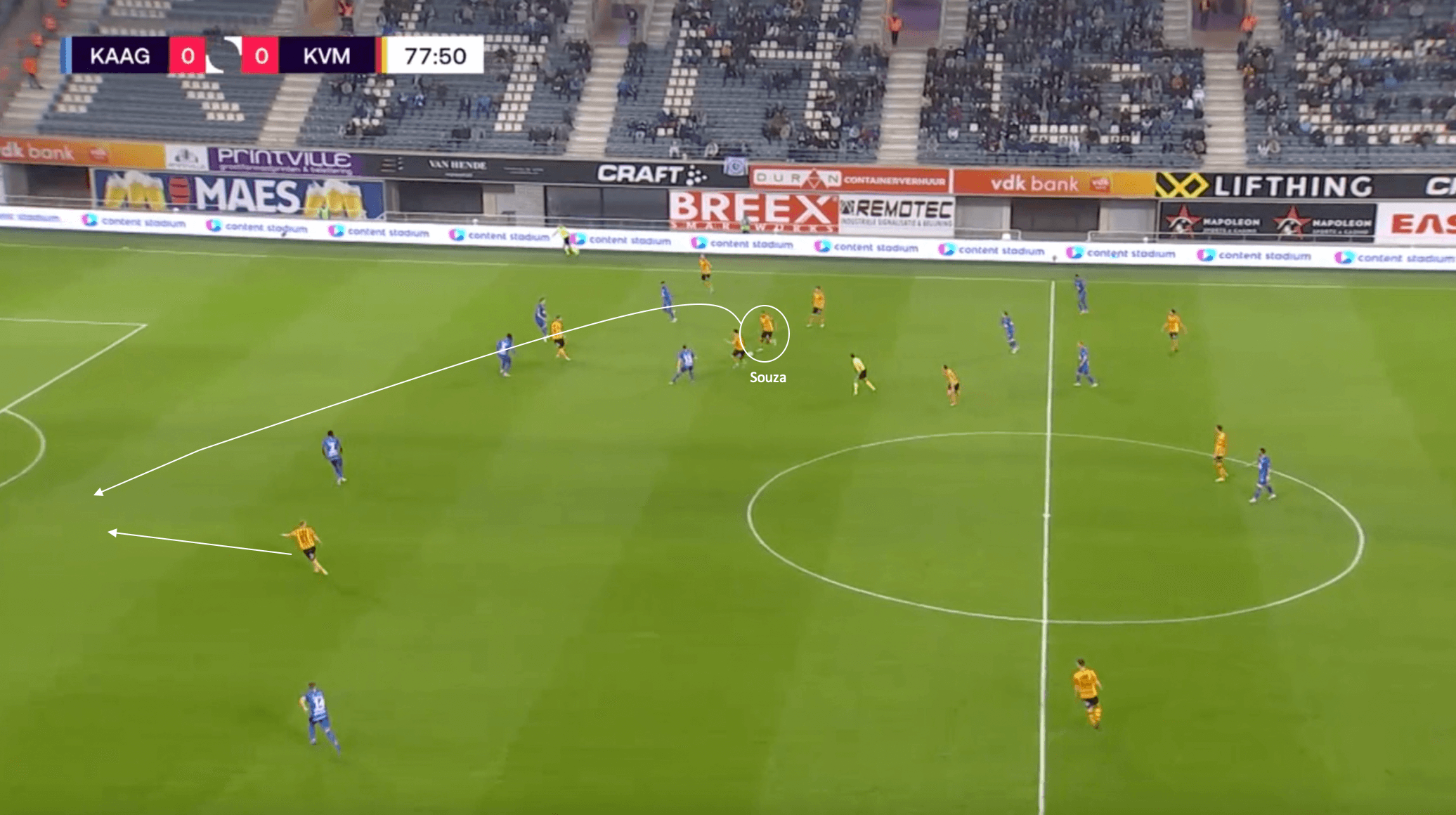 When breaking Vinicius Souza’s passing down into the different categories and looking at them individually, his long passing ability is what stands out the most. In the phase of play above against Gent, the Brazilian has gathered possession just inside the opposition’s attacking third. After taking just a few touches, he is able to spot his teammate making an unmarked run in behind the Gent defence. Souza then plays a perfectly-weighted ball over the top of the opposition’s backline and into the path of his teammate. This vision and long passing ability of Vinicius Souza is able to lead to a goal scoring opportunity for Mechelen. 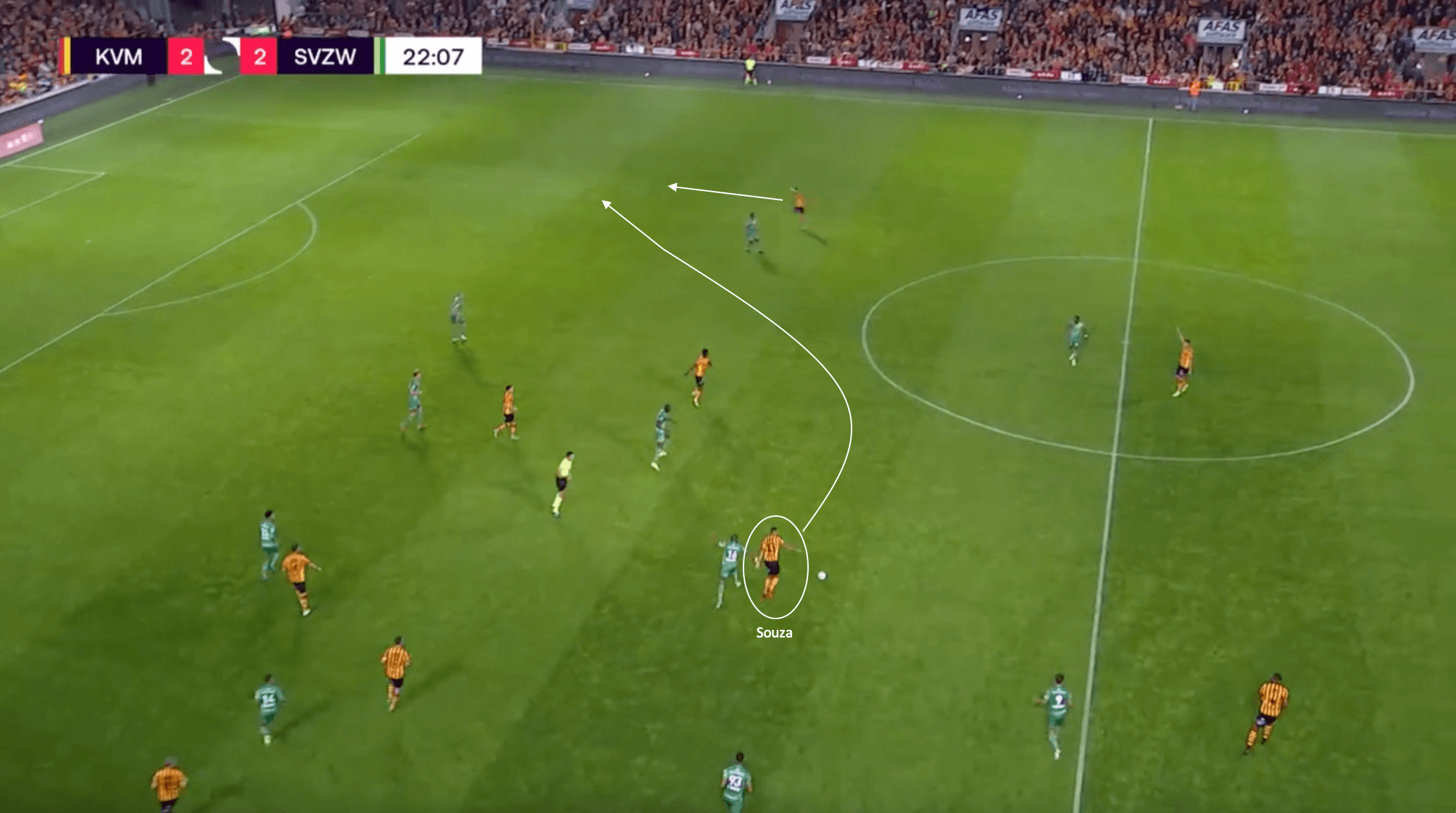 A similar situation to the previous example is displayed above. Vinicius Souza is once again in possession just inside the opponent’s half of the pitch. Notice how he is being closed down and pressured by the opposition midfielder, but he is still able to spot the run of the attacker down the right flank. Though under pressure, Souza is still able to play a ball over the top and in behind the Zulte-Waregem defence, breaking the midfield and defensive lines instantly. The ball is perfectly weighted once again, allowing the attacker to run onto the ball and make a run at goal. Unfortunately, the ensuing shot is hit into the side netting, but this chance arose because of the calmness and accuracy of Vinicius Souza while in possession. 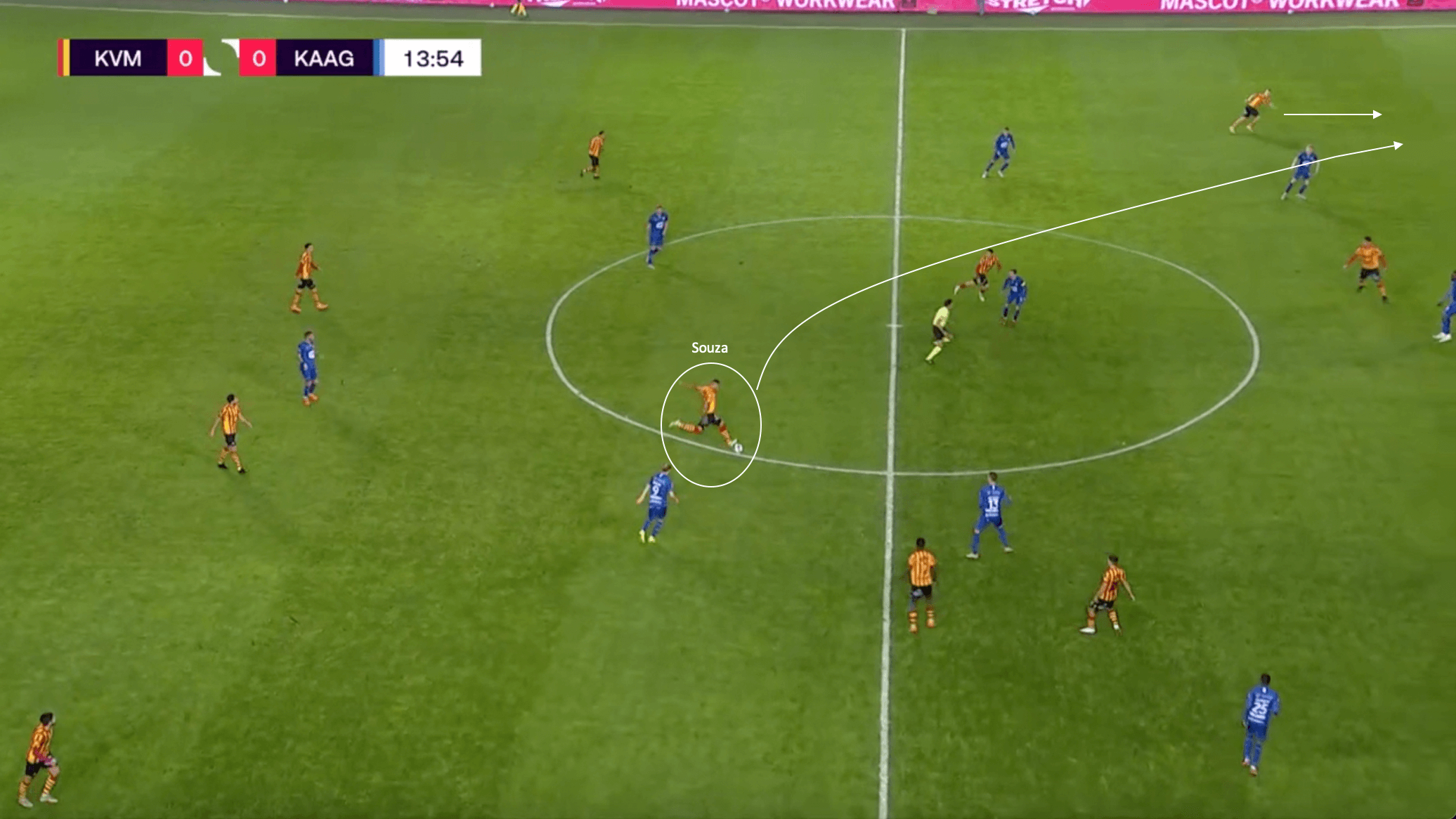 In the phase of play above, Souza is able to gather possession near midfield, and no opposition players look to close him down. This allows him the time and space to gather himself and look for the best passing option. After one touch and turn, the Brazilian midfielder is able to play a ball over the top perfectly into the feet of the attacker on the far touchline. Notice also how this pass from Souza instantly bypasses Gent’s midfield and defensive lines, with the attacker who receives the pass being able to instantly drive into the penalty box and get away an attempt on goal.

This section has been able to show the passing quality that Vinicius Souza possesses, especially when it comes to long passes that bypass the opposition’s defence. Espanyol are not a side that will look to hold possession and break down opponents methodically, rather, they will look to win back possession and counter or quickly get behind the opposition’s defensive line. This is a similar style of play to the one that Souza was a part of at Mechelen last season, so his range of passing will be a big bonus to Diego Martinez next season.

Another strength in Vinicius Souza’s game is his quality when it comes to 1v1 defensive duels. This is not something that can be judged over a small sample size with Mechelen last season either. In the 2021/22 season, Souza attempted 10.58 defensive duels per 90 minutes, winning a very respectable 65.1% of them. This following section will take a look at some examples of Souza’s quality in defensive duels. 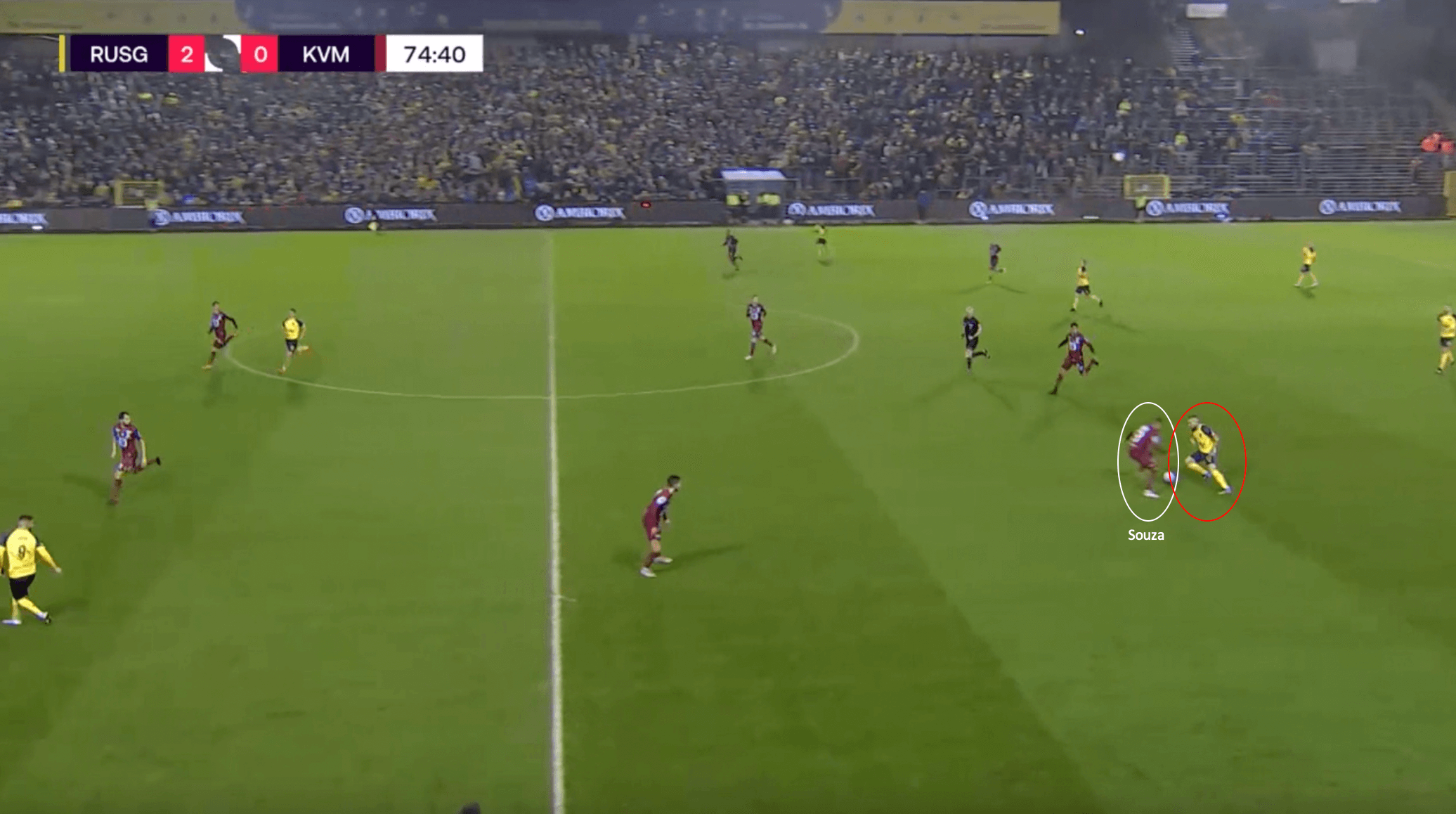 An example of Souza’s qualities in 1v1 defensive duels is shown above. USG are breaking after a turnover in possession, looking to get numbers forward into the attacking third of the pitch quickly. In this phase of play, it is up to Souza to try and dispossess the attacker or attempt to slow him down. The Brazilian is able to make himself bigger, but not too much as to make himself unable to respond to quick changes in direction. The player in possession attempts to dribble past Souza, but he is able to do well and dispossess the attacker, allowing Mechelen to start a counterattack in the attacking third. 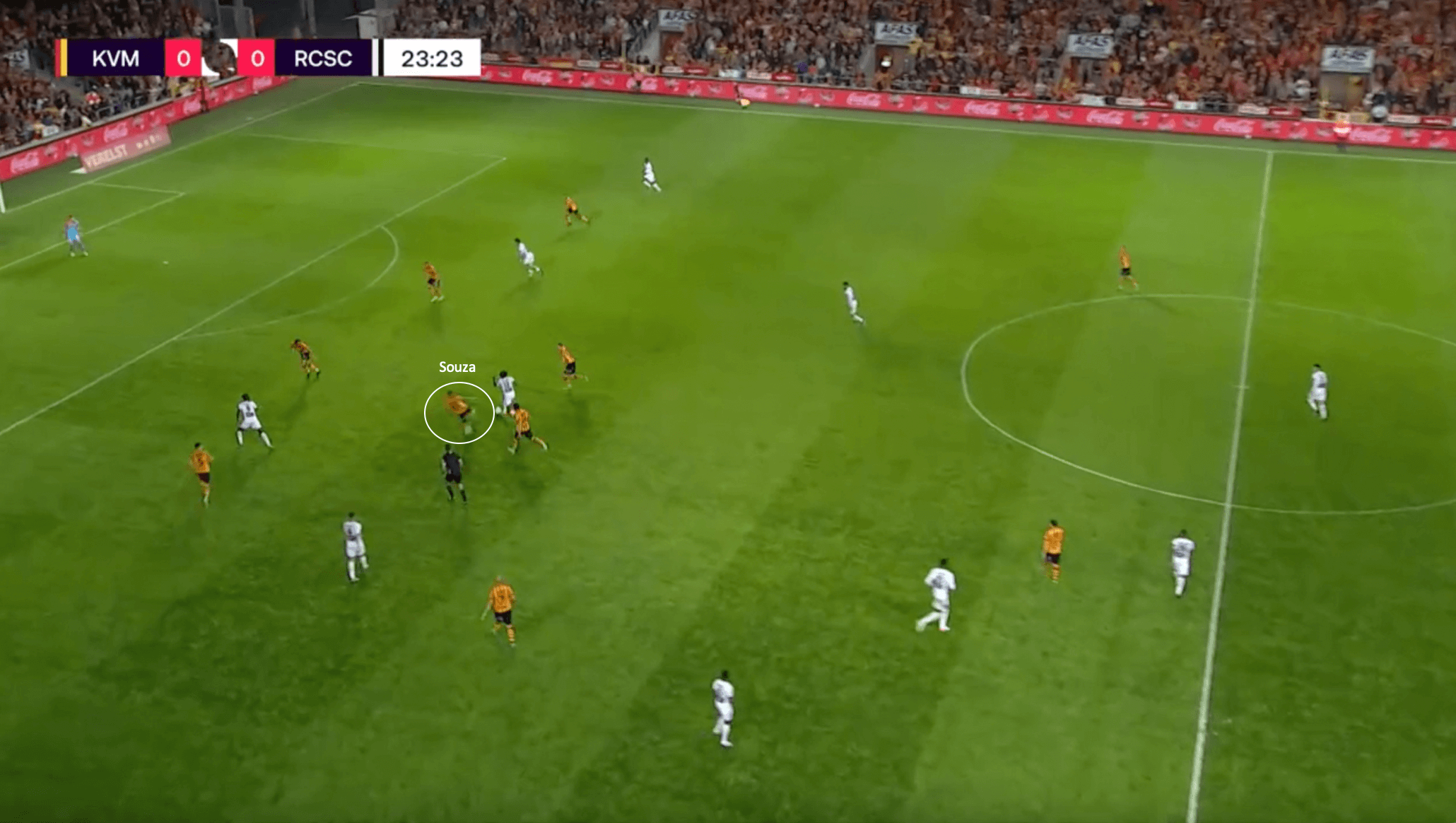 While Vinicius Souza is successful often when it comes to committing to defensive duels, he is also unsuccessful at times. Souza is very tenacious when it comes to tackling, with him prone to go to ground too often to try and commit to challenges. This normally results in either him committing fouls and picking up yellow cards, or he will completely miss the player and the ball, allowing the player in possession to get by without a challenge.

This phase of play above shows an example of this. Souza has committed to going to ground to try and tackle the ball away from the player in possession, with him totally missing. This allows the attacker to dribble through the Mechelen defence and to the edge of the penalty box as a result. While he may be strong when it comes to defensive duels, his tendency to go to ground at times is a bit of a concern. 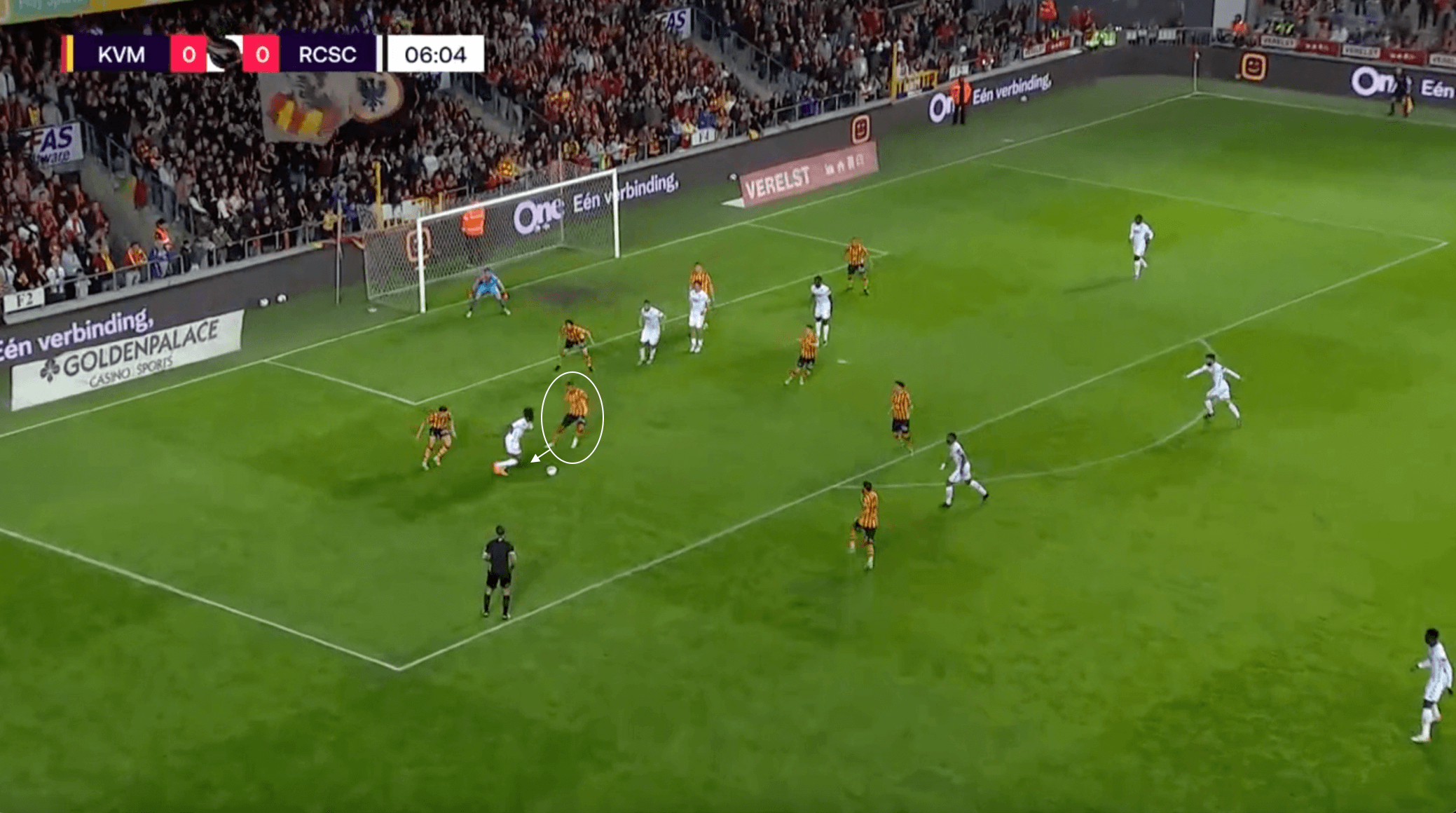 However, while Souza can sometimes be erratic and frustrated when it comes to trying to win back possession in defensive duels, he is also at the other end of the spectrum as well. The phase of play above shows an example of Souza being composed in an area of the pitch where his tackling needs to be perfect. The Charleroi player is in possession inside the penalty box looking for an opening on goal. Souza is able to step out and make a perfectly-timed challenge to knock the ball away, with the Brazilian’s ensuing challenge sending the ball to a teammate who can clear it away from danger.

All in all, Vinicius Souza is a highly competent player when it comes to defensive duels. With that being said, he is not perfect, and his tendency to occasionally get frustrated and go to ground could be a cause for concern for Diego Martinez at Espanyol. However, the pros of his quality in defensive duels still outweigh the cons.

The final section that will be looked at in this analysis piece is Vinicius Souza’s ability in aerial duels. Last season for Mechelen, Souza attempted a relatively high number of 7.3 aerial duels per 90, with a success rate of 55.8%. At 6’2” tall, this is a highly respectable success rate, and it could possibly even be quite higher. We will now look at Vinicius Souza’s aerial presence in more detail. 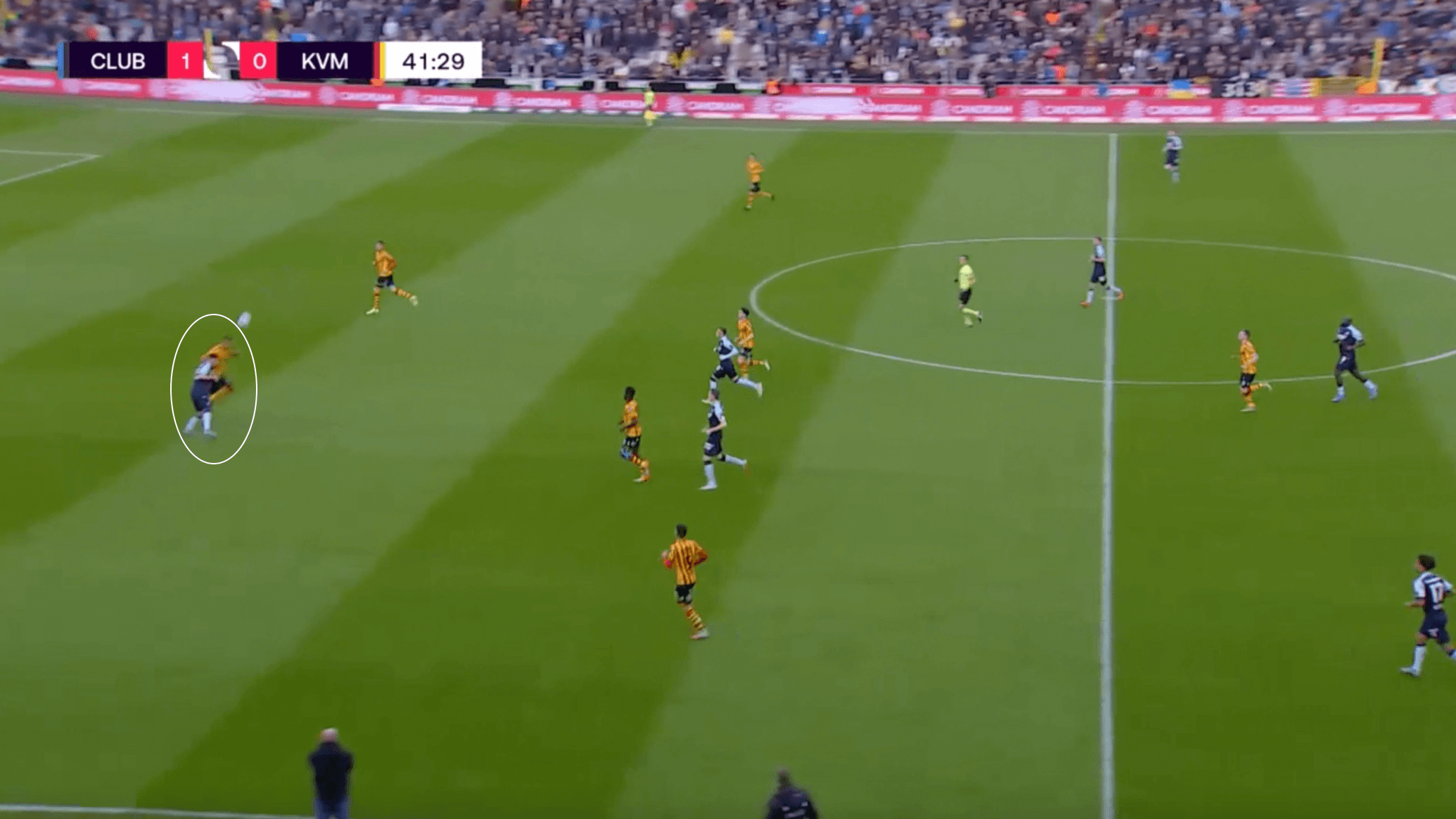 The image above shows a great example of the quality that Vinicius Souza has when it comes to aerial duels. Club Brugge’s goalkeeper attempts a long goal kick to try and get the ball straight to the Mechelen attacking third. However, Souza is able to use his superior height and strength to win the aerial battle, with Mechelen eventually winning possession after a few more headers. 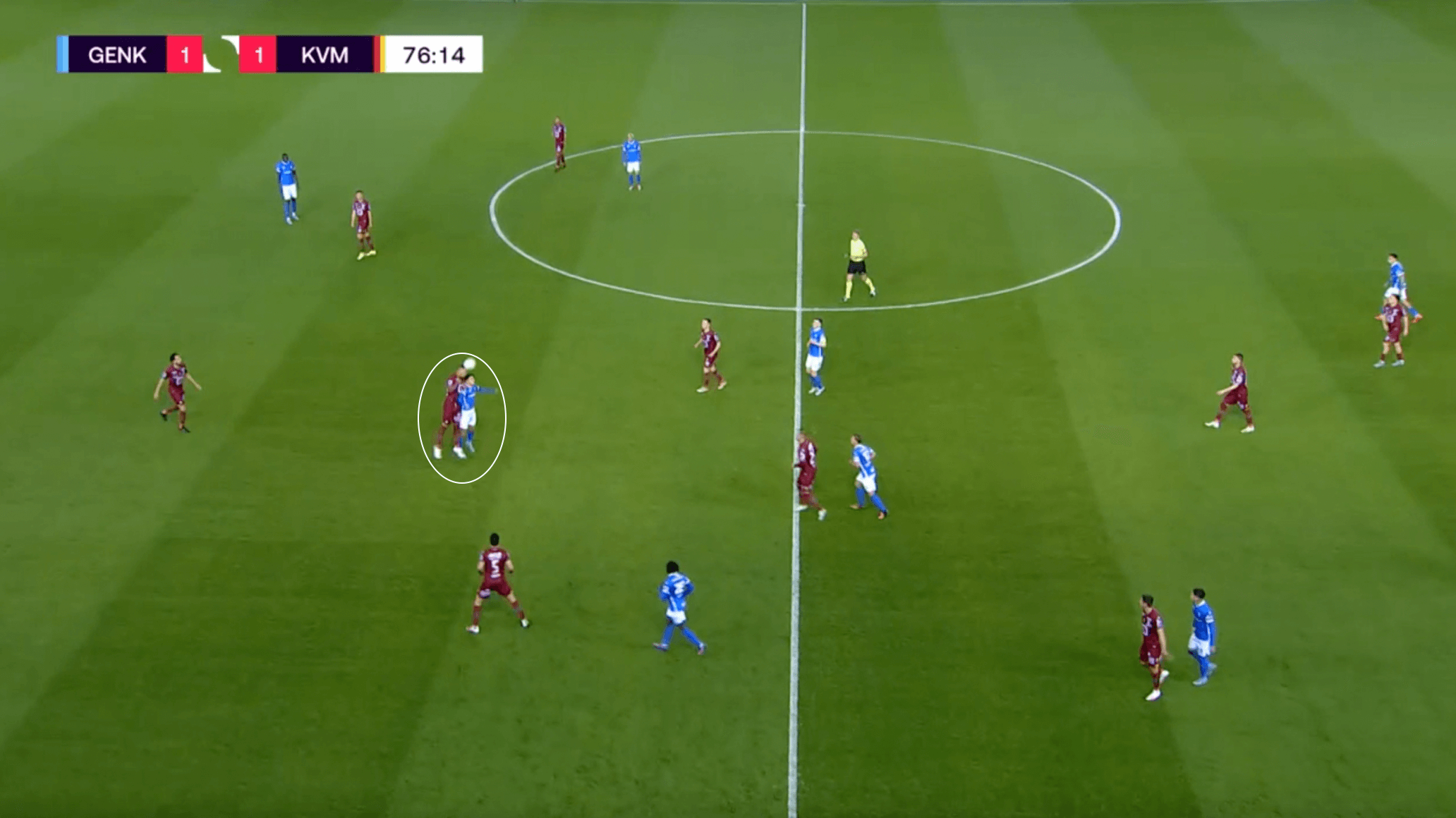 A similar situation to the first example is shown above against Gent. After a long goal kick from Mechelen, the first ball is won in the air by a Gent player. When it is headed back towards the Mechelen half, Souza is able to once again use his strength and aerial superiority to win the second ball, with his resulting header falling to the feet of a teammate. In this situation as well, the Brazilian is smart not to foul the Gent player, with it relatively easy to commit a foul when a player is backing into you trying to win a header. 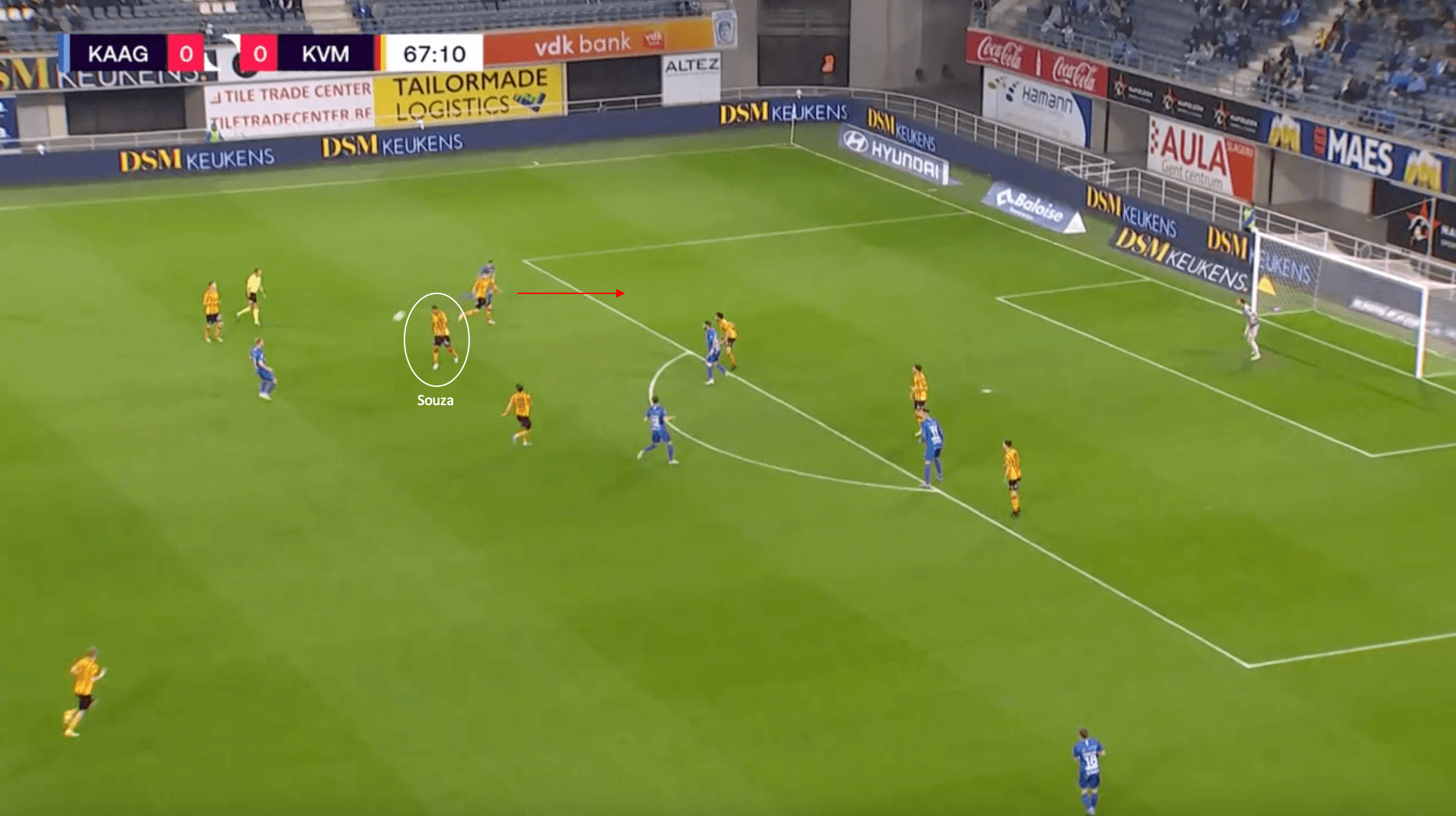 It is not just in direct aerial duels with opposition players that Souza is able to use his height to his advantage. In this phase of play above against Gent, the opposition player is attempting to play a pass over the top into the path of the attacker making a run in behind the Mechelen defence. Souza is able to recognise what the Gent player is attempting to do and gets up high enough to intercept the pass, heading it away from danger.

RCD Espanyol are getting a defensive midfielder who has the height to be able to consistently win first and second balls aerially off of things like goal kicks. This will surely be a valuable asset to Diego Martinez’s squad for next season.

After a very successful season on loan at Mechelen last season, Vinicius Souza was linked with many big clubs around Europe. After a bit of a protracted negotiation process, he agreed to move to La Liga, joining RCD Espanyol on loan for the season. This tactics and analysis piece has been able to demonstrate some of the strengths that Vinicius Souza possesses, as well as some slight improvements that could be worked on. With that being said, Souza is very much a high potential player, with it not impossible to see the Brazilian national team starting to cast glances his way if he continues to excel.