Is there a more polarising figure in football at the moment than Trent Alexander-Arnold? The 23-year-old Liverpool and England right-back is widely admired for his ability in the attacking phases and there are few if any players out there who have a more effective passing range than the young Englishman.

For all that he gets a lot of praise for his playmaking abilities, however, there are always people who are ready to knock the 23-year-old for his defensive ability and instincts. So far this season it would be fair to say that things have not gone to plan for Liverpool and with the team struggling for results, it is only natural that people start to look for the reasons behind the poor form. The truth is, there is no one reason behind Liverpool’s slow start and instead there have been numerous contributing factors.

While the defence, Alexander-Arnold included, have looked slow and porous, they have not been helped by the lack of pressure on the ball from the forwards, something that was for so long an expected aspect of Liverpool’s game, and the issues that the club have suffered in the midfield where the previously evergreen James Milner, in particular, has now begun showing signs of his age. All of these factors have fed into what has been an uncharacteristic set of performances from Jurgen Klopp’s team.

As always in these situations, the watching public likes to look to identify a cause or a scapegoat and it is easy for the blame to effectively land on the shoulders of Alexander-Arnold given the fact that his defensive performances are never at a very high standard.

All of this is also feeding into the ongoing narrative around the upcoming 2022 World Cup in Qatar. England will be going into the tournament as one of the favourites but one of the positions in which they have the most depth available is right-back. There is a genuine question at the moment surrounding whether or not Gareth Southgate should include Alexander-Arnold as part of the squad for Qatar and that is despite the obvious positives that you get from the young right-back in the attacking phases of the game. The likes of Kyle Walker and Reece James, amongst others, are still in contention for the position as well and as things stand it feels as though Southgate has a huge decision to make. Although, you could argue that both James and Walker offer versatility in terms of their positioning, is there really space in the squad for three players who are primarily right-backs?

As is so often the case, we can turn to data in order to answer the key question of this scout report; should the England coach Gareth Southgate take Trent Alexander-Arnold to Qatar as part of the squad? This tactical analysis piece looks to find out. It will be an analysis of Alexander-Arnold’s overall game, seeing if the Englishman fits into the Three Lions’ tactics. 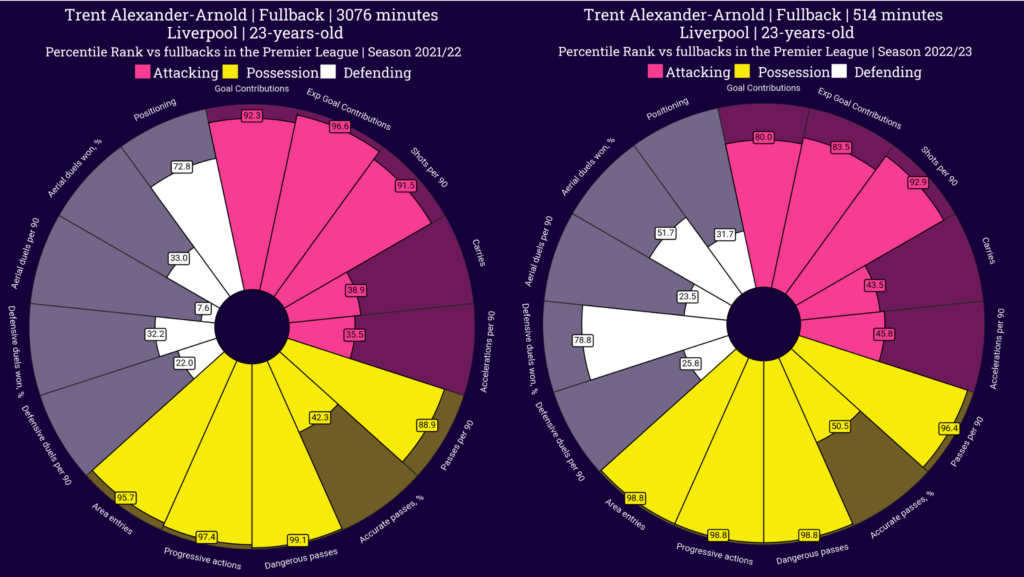 At the moment, we are in that difficult period of the season from a data perspective in that the sample size (in terms of minutes played) is growing to the point that it is usable but is still too low to use in isolation. As such we have taken Alexander-Arnold’s data from the 2021/22 Premier League season and the 2022/23 Premier League season so far. We should pause here to say that all of our data here is from Wyscout and we have used Python to convert the data into percentile rankings and then create bespoke metrics that we believe are insightful in terms of the fullback position.

The true strength of Alexander-Arnold, however, sits in his passing and ball progression and as you can see from the two pizza charts he is still performing in these areas. In terms of passes per 90, dangerous passes, progressive actions and area entries, his data is holding steady and it is quite frankly elite. This is where we begin to see the real argument for Alexander-Arnold going to Qatar.

It is in the defensive phase that we start to see the issues with Alexander-Arnold and as you can see, his output is generally poor. In 2021/22 he impressed in terms of his positioning metric, which takes into account interceptions and blocks, and so far in 2022/23, he has impressed with the percentage of defensive duels that he has won so far.

From this point on, we can make use of event data to drill down further into the performances of Alexander-Arnold over the last two seasons. 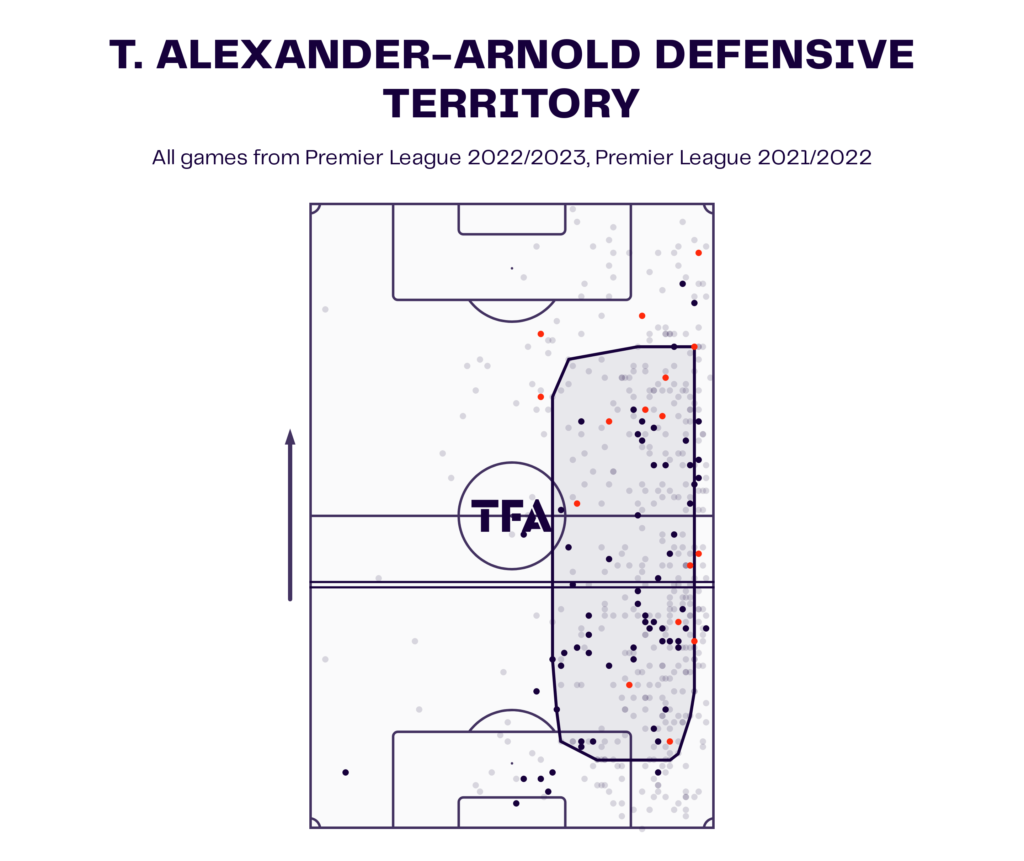 Let’s start by looking at the defensive output from Alexander-Arnold in the Premier League across last season and this season in the Premier League. The horizontal line on the pitch shows us the average height of the defensive actions performed by Alexander-Arnold during that time. As you can see defensively his actions are generally higher up in the pitch with the and in the right half-space and right-wing area. While we would normally expect a fullback to have a greater volume of actions, the positions and the areas of the pitch that we see the Liverpool fullback engaging defensively make sense. 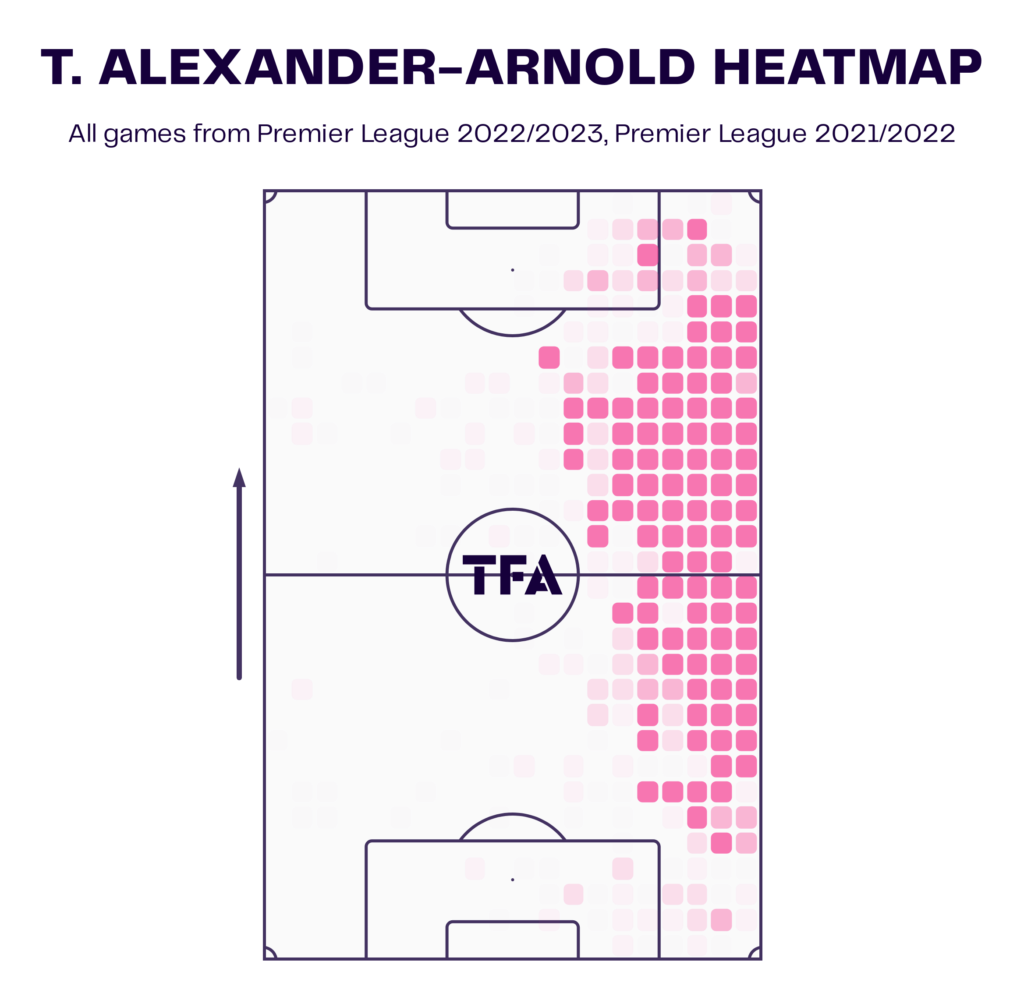 Once again, defensively, we see a less traditional look in terms of his heatmap around his own penalty area but this is likely a result of Liverpool being possession-dominant for the most part. 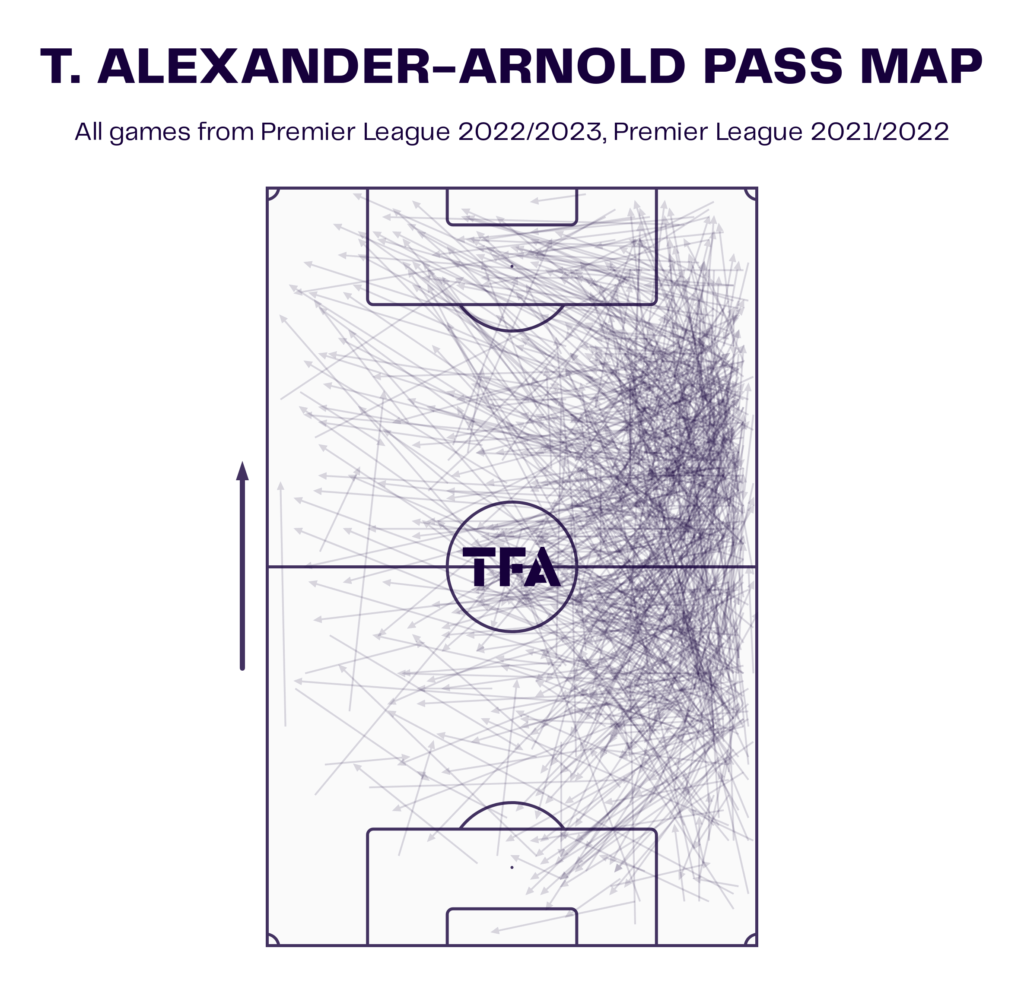 The pass map for Alexander-Arnold also supports the case for Southgate including the Liverpool right-back in his squad as there is quite simply no other right-back in football who has the ability on the ball and the passing range to compare with him. His volume of passes in the half-space, both in his half and in the opposition half of the pitch alone is enough to explain how he is able to help his team to control the game.

He has the ability to receive the ball in these areas before finding angles to provide line-breaking passes to break his team into the final third. He is also a constant threat to either look to play longer switches of play over to the left-hand side or to find angles to play longer and more central crosses into the opposition penalty area.

In possession, there is no doubt that Alexander-Arnold effectively operates as an extra creative central midfielder. 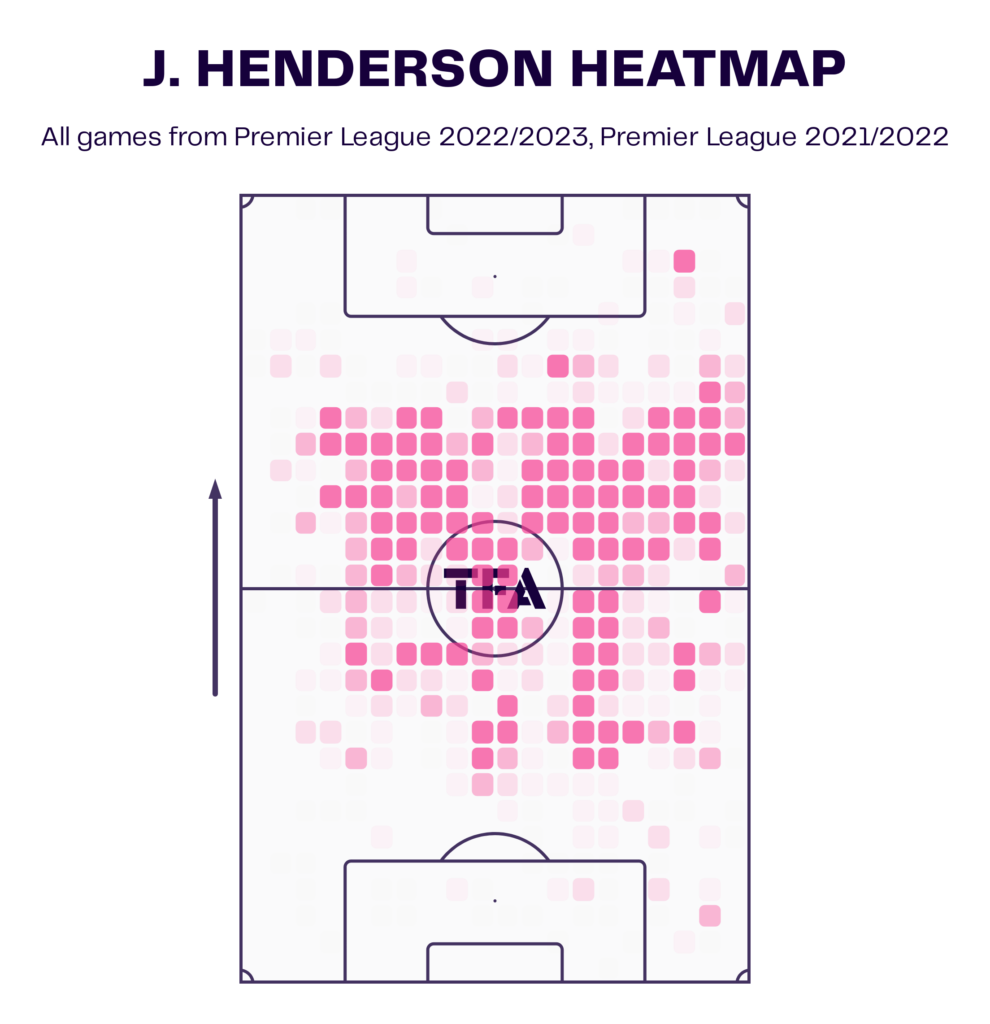 There is a reason that Jordan Henderson has developed into one of the most important midfield players at Liverpool, beyond his incredible pressing outputs and leadership qualities, and that is his ability to cover the pitch and prevent the opposition from being able to take advantage of space in transitions. Henderson will often be played on the right side of the midfield because Klopp is aware that the Liverpool captain has an ability to sense and nullify danger before it can truly develop.

Often, when Alexander-Arnold pushes forward and finds himself in advanced areas while supporting the attack and looking to create opportunities for teammates, we will see Henderson holding a deeper position on the right-hand side. You can see that in Henderson’s heat map above. 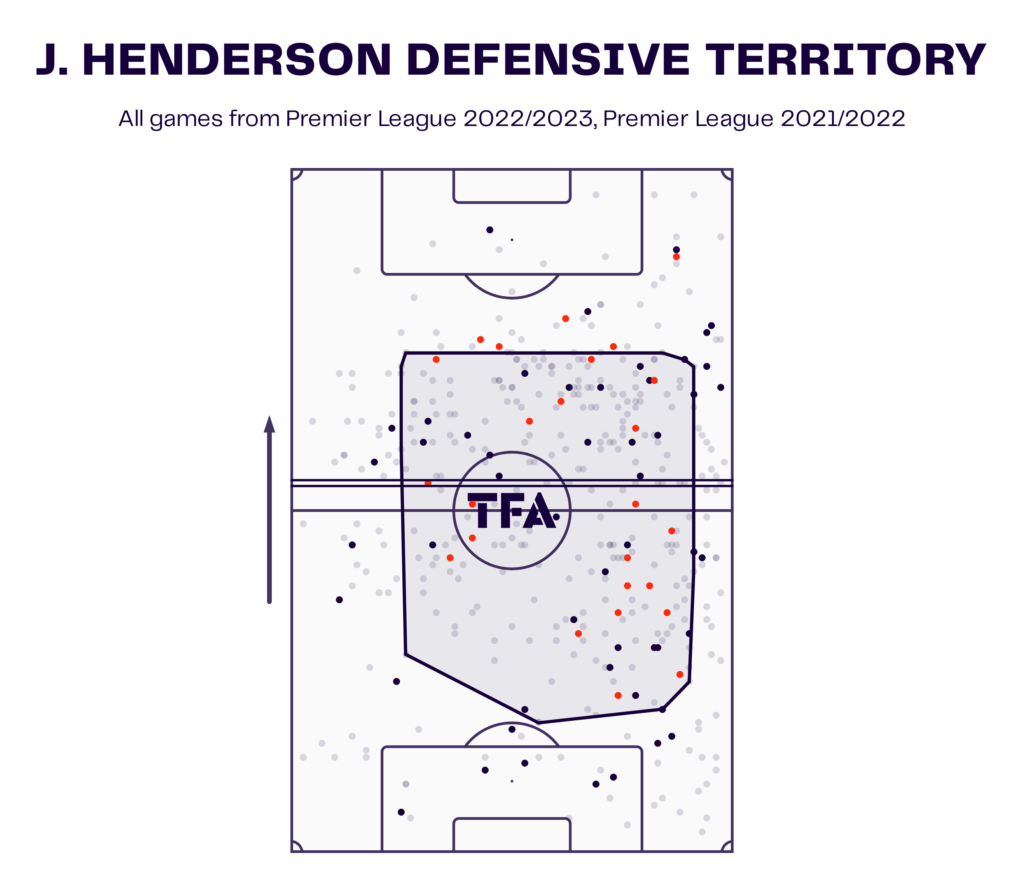 The same thing is true when you look at the map of Henderson’s defensive event map and you can see that it is skewed towards the right side of the pitch, and on the right side of the pitch he has more defensive actions in deeper areas of the pitch. In essence, it is the performances of Henderson and his work rate and defensive instincts that allow Klopp to use Alexander-Arnold in a way that makes the most of his strengths. Crucially, Henderson is also English so Southgate has the option of also taking the Liverpool captain with him to Qatar.

We believe that the strengths and qualities that Alexander-Arnold offers in possession and in the attacking phases far outweigh any problems that he may bring in the defensive phase or defensive transitions within the game. We would include the Liverpool right-back in the England squad and we believe that he should also start for England given the fact that they can expect to be possession dominant for the most part.

With the likes of West Ham United midfielder Declan Rice and Henderson likely to be included in the squad as well, the opportunity is there for Southgate to adopt the same method as Klopp to ensure that England are not left in danger in moments of quick transition.